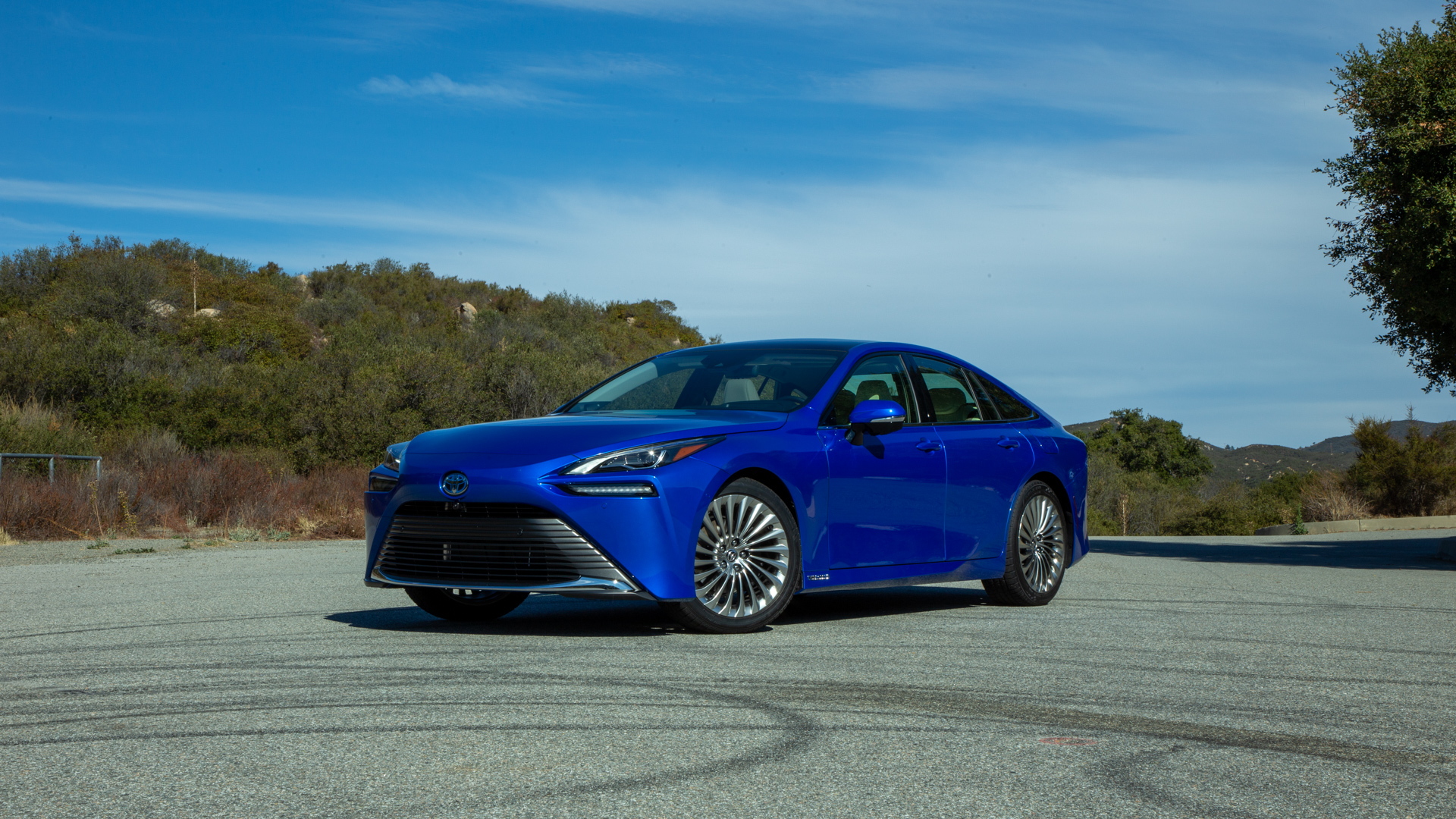 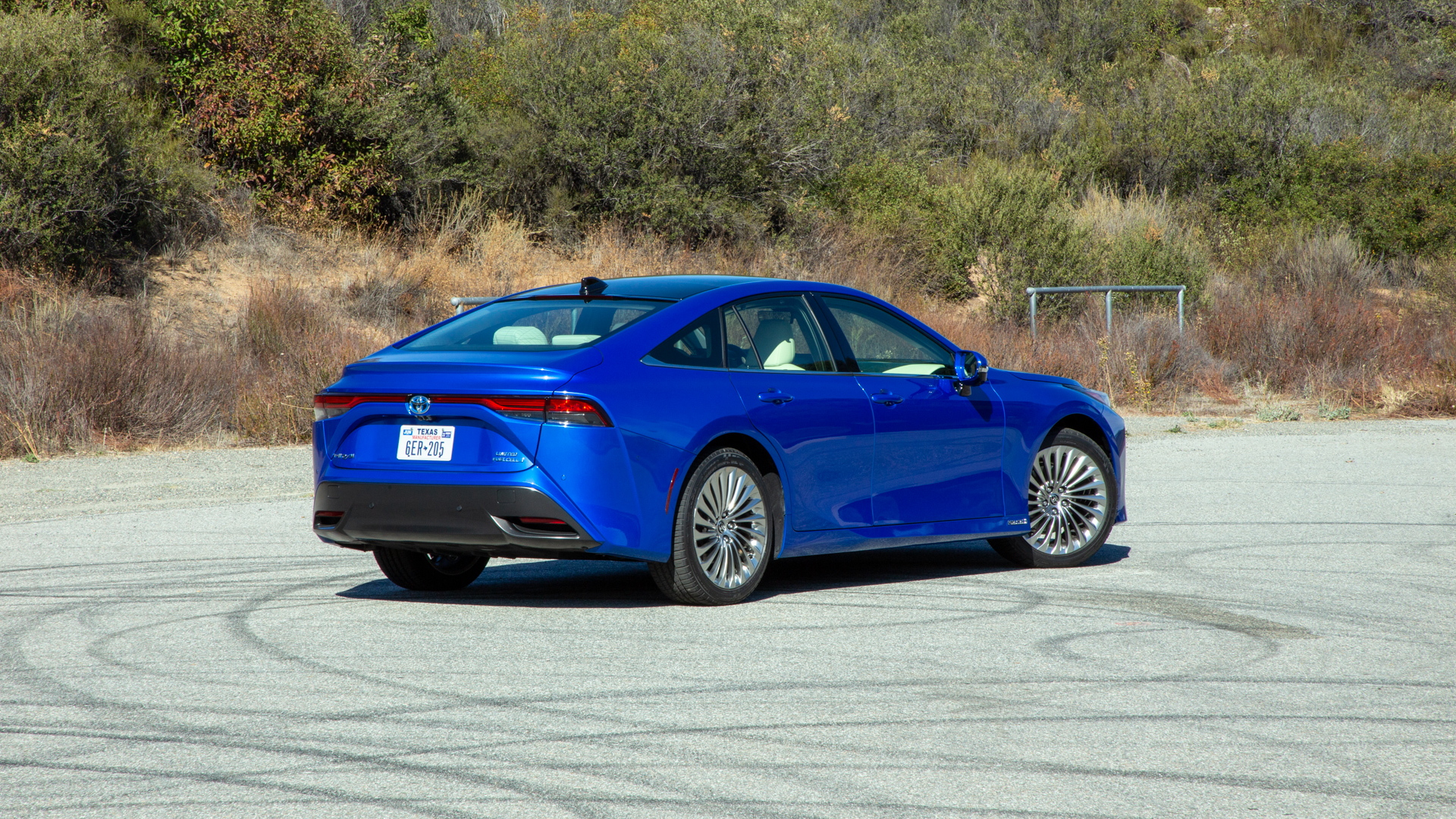 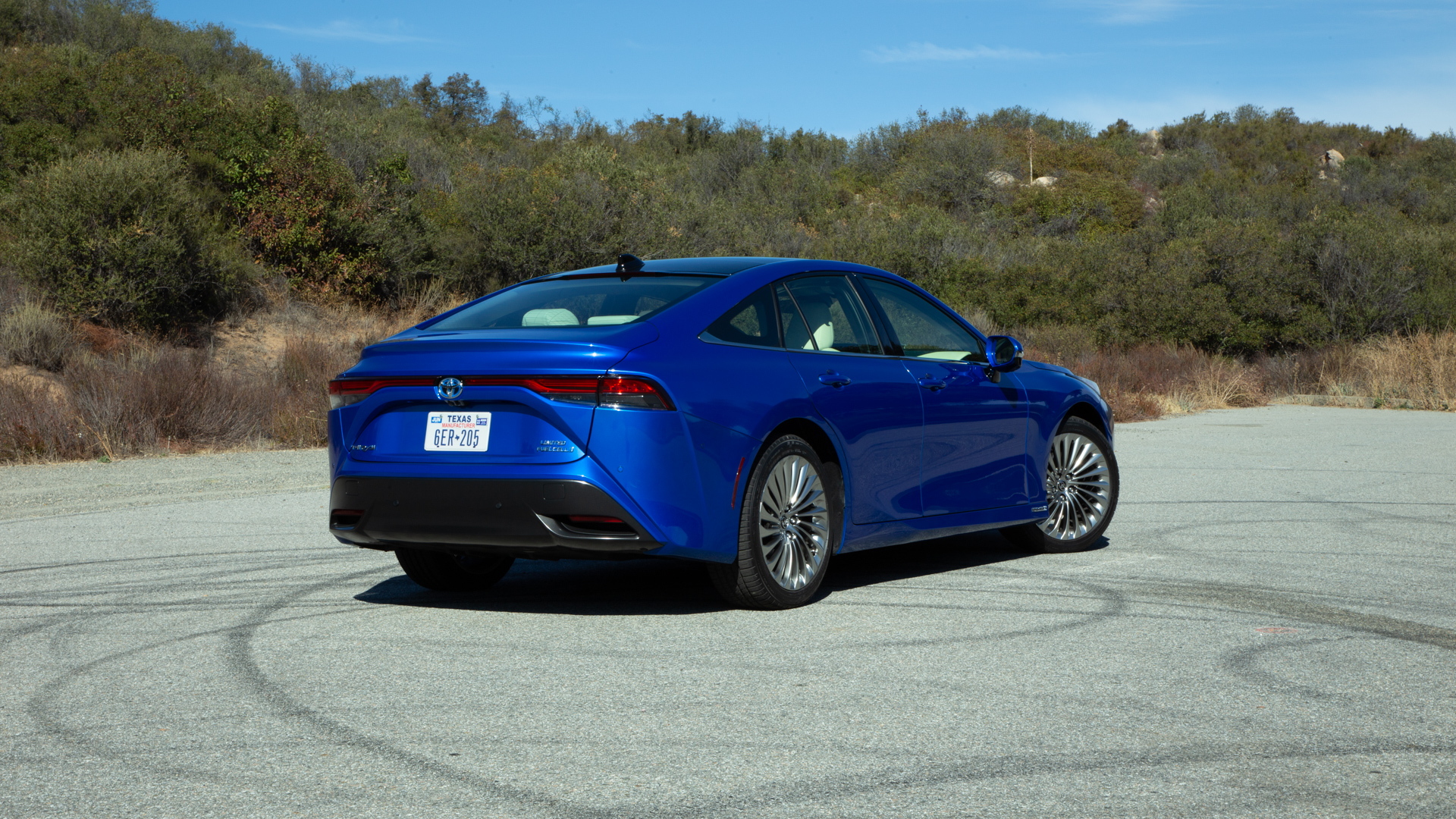 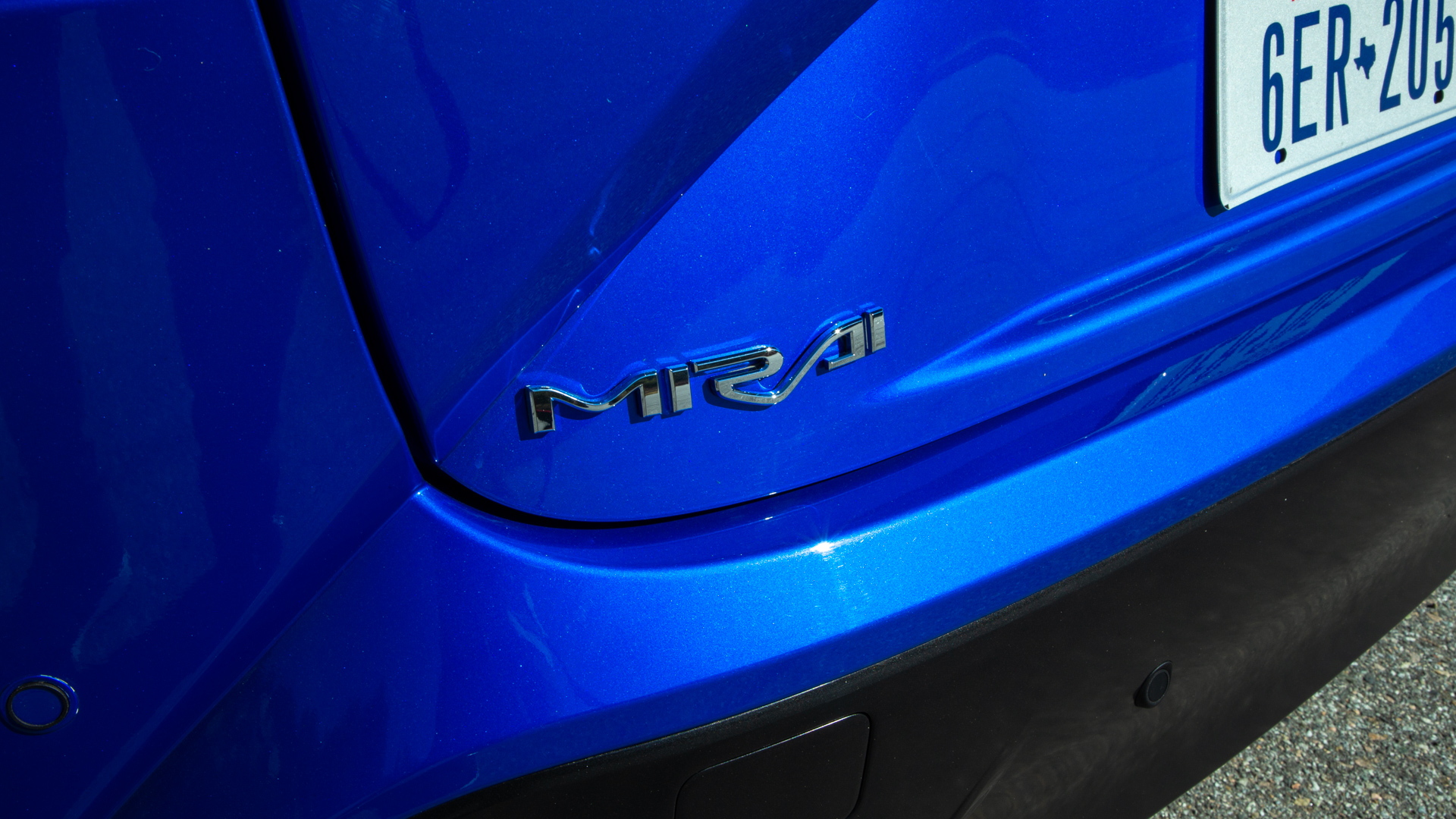 The redesigned 2021 Toyota Mirai looks and feels wildly different in this iteration.

The first iteration of Toyota’s fuel-cell vehicle had more to prove and its styling reflected that. The Mirai’s look was loud and intended to draw attention to itself. Its funkiness became a calling card.

But for its second go-round, the Mirai feels more secure in itself, more mature. The new Mirai has completely flipped from the former approach and it turns heads for a different reason: It’s a damn good looking car, more sedately styled and more attractive. The classic long hood/short decklid proportions give it an excellent profile and I prefer the more conventional front grille to the space invader schnoz of the outgoing car.

Beyond the makeover, the 2021 Mirai also moves to a rear-wheel drive platform borrowed from Lexus and comes with improvements to the fuel cell stack, the interior, and the technology throughout. The new car is better than the old one in pretty much every way, but the problem it will run into is that as good as it is, it runs into the same external limitations.

Many of the components of the Mirai’s fuel cell system have been swapped out for newer, smaller parts that help to save weight and allow the car to be packaged more optimally. It starts with the fuel cell stack, which has been downsized by 20% and is 50% lighter.

To keep costs down, the Mirai reuses parts from other Toyota vehicles. Its lithium-ion battery is sourced from one of Toyota’s other hybrid systems, as is the electric motor.

The system still works in the same fashion; Initial acceleration is started by the battery, then there is a transition to a mix of power from both the fuel cell and the battery, until the Mirai finally moves fully to fuel cell power at speed. This transition happens seamlessly to the driver, there are no weird shudders or hesitations as the car moves from one power source to the other.

Power output has increased to 182 horsepower and 221 pound-feet of torque, that torque number appears to be down from the previous generation but according to Toyota the gearing has changed so final-drive torque is actually increased in the new model.

On the road, the Mirai’s acceleration feels similar to the previous car, which is fine. 0-60 mph happens in a leisurely 9.2 seconds, but the Mirai has enough juice off the line for merging and feels strongest accelerating from around 20-45 mph. Though the initial reports of the Mirai’s RWD setup might have spawned some dreams of a fuel cell powered sport sedan, it isn’t that. But it does do one thing very well: touring.

Lexus underneath, and it shows

The new Mirai shares its rear-wheel drive GA-L platform with the flagship Lexus LS sedan and the strength of those bones is immediately apparent when you hop behind the wheel of the Mirai. Within a quarter mile of taking off, I went over a bumpy section of road and thought to myself, “I am not driving a Toyota.”

A look at the layout of the Mirai shows how this is possible. The three hydrogen fuel tanks follow a new layout and are tucked under the floor between the wheels and the battery sits behind the rear seats. All of this low-slung weight drops the Mirai’s center of gravity and on top of that, the new car has 50:50 weight distribution. This combination gives the car incredible balance and allows it to have a pliant suspension that absorbs bumps and other road imperfections, without causing the sedan to feel too loose. I could drive a long, long way in a Mirai and be perfectly happy to do so.

I was also very impressed with the Mirai’s steering feel, a point of weakness for some of Toyota’s other sedans. Instead of feeling vague and floaty, the steering is accurate and has just enough resistance to provide ample feedback. It doesn’t quite have enough sharp turn-in to feel sporty but that’s fine.

The cabin can get a bit noisy. The Mirai might ride like a Lexus but it has wind and tire noise like a Toyota. The greater auditory annoyance comes from the artificial engine noise that is piped into the cabin. It kicks in when driving in Normal mode and you accelerate enough that the Mirai’s cluster indicates you are in the ‘PWR’ range of eco-driving. Move the Mirai to Sport mode and it gets worse. The engine noise is louder and higher pitched, and comes on whenever you touch the throttle at all. Eco mode is blessedly silent and Toyota says that the engine noise can be shut off. We’d recommend doing so the moment you get into the car.

The EPA estimated range for the 2021 Mirai has made a significant jump, to 402 miles for the Mirai XLE. That’s a 30% increase over the previous model’s 312 miles and Toyota says that 20% of that increase comes from added hydrogen capacity, with the other 10% coming from improvements to the fuel cell system. There is a large gap between the Mirai’s trim levels, Limited models only offer 357 miles of range—45 miles less than the XLE.

When I hopped into the Mirai to start the day, it had a full tank of hydrogen but a trip computer estimated range of just 234 miles, well off the Limited’s estimated range. Toyota says that this is because the trip computer takes time to learn the driver’s style of driving to offer an accurate range estimates and the test cars had been mostly driven by journalists who like to drive more enthusiastically, shall we say.

Up until a fill-up that took place about two-thirds of the way through the drive route, I covered 63.5 miles and the range remaining according to the computer fell by 69 miles to 165 miles remaining. I was driving vigorously on a winding road (fulfilling stereotypes) for a decent portion of those miles and the trip computer also reported that I averaged 43 mpge over that time, far less than the Limited’s estimated 65 mpge combined rating.

That knocked the hydrogen tanks down to around 60% full and to refill them took 1.823 kg of hydrogen and cost $30.16, or $16.54 per kg of hydrogen. The Mirai holds 5.6 kg of hydrogen and at that price, it means a full tank would cost just about $90. Thankfully, Toyota is continuing its program of covering three years or $15,000 worth of hydrogen refueling for lease customers. Those who buy a Mirai get the same amount of money, but six years to use it instead of three.

Refueling times are still a bit longer than filling up on gas, it took about three minutes to fill the Mirai back up at that level. The Mirai also requires H70 pressures to get the Mirai to full, an H35 pump will only get it halfway. Toyota says that all of the fueling sites should have H70 pumps in operation, with the H35 only available as a backup, but bear in mind that if the H70 isn’t working, you will be walking away with half of a tank (and half the range).

The Mirai will still be limited in the areas it can be sold by hydrogen infrastructure, or a lack thereof in most cases. This means that at launch, the Mirai will once again be a California-only vehicle.

As of this writing, there are currently 42 hydrogen stations with more than 20 slated to open in 2021. A Toyota partnership with Iwatani Corporation, recently announced, is helping boost that number in California. Toyota says that the goal is for there to be 69 hydrogen stations by the end of next year, with that number jumping up to 150 by the 2026. Five of the open stations are found in Massachusetts, Connecticut, and Rhode Island but Toyota says that is not enough to start to sell the Mirai in the northeast and more development will need to be done.

California is still the big leader in hydrogen station development, the California Energy Commission released $100 million of state grant funding for station development and Toyota says it is hoping for 150 stations statewide by 2026. But stations are only a part of the problem, as recent hydrogen shortages have shown. Toyota’s plan is to sell 3,250 units in 2021, just in California.

Is it a value?

In one way, the Mirai has always been an incredible value because Toyota is surely losing gobs of money on each car it sells—both with the technology and the subsidized fuel. The redesigned Mirai ends up being both cheaper and more expensive than the old model, since it is now offered in two trim levels. The XLE ($50,455) is significantly cheaper than the outgoing Mirai, undercutting its price by $9,050, while the Limited ($66,955) is much more expensive.

Toyota has yet to release lease pricing details on the Mirai, probably in part because of the uncertainty surrounding the tax credit situation with fuel-cell vehicles. Leasing the previous Mirai was a solid deal with the hydrogen fuel stipend that Toyota offers and that should be true for both leasees and buyers alike as that money continues.

The 2021 Mirai is certainly much improved in this iteration, it looks better, goes farther, drives better, and Limited models have a nearly Lexus-grade interior as well. The questions about hydrogen’s viability in the current market still remain, but as far as the hardware is concerned the new Mirai hits all the marks.

Toyota provided a hotel room, a piece of chocolate cheesecake, and a morning jaunt in the 2021 Toyota Mirai for Internet Brands Automotive to bring you this firsthand report.