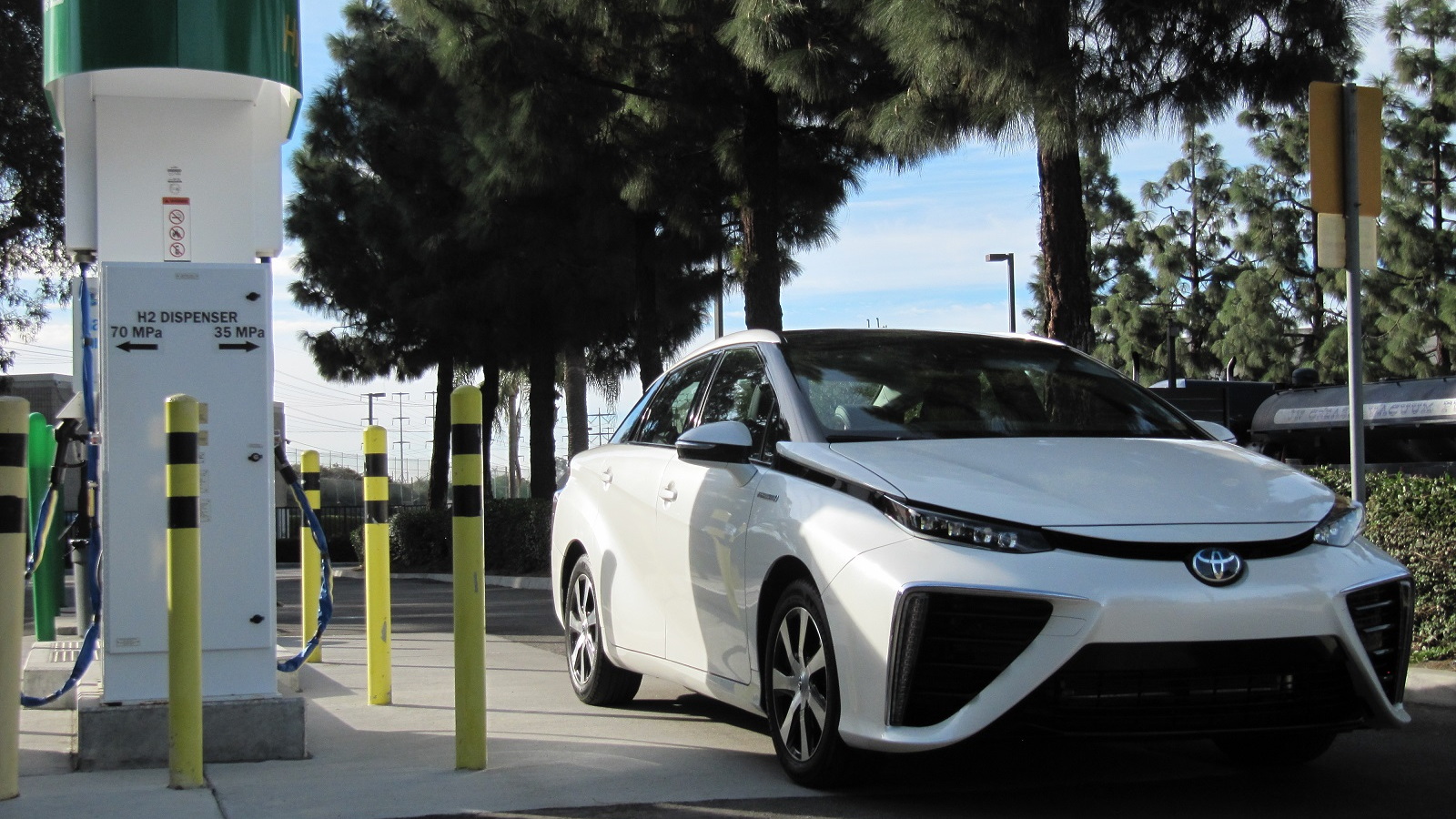 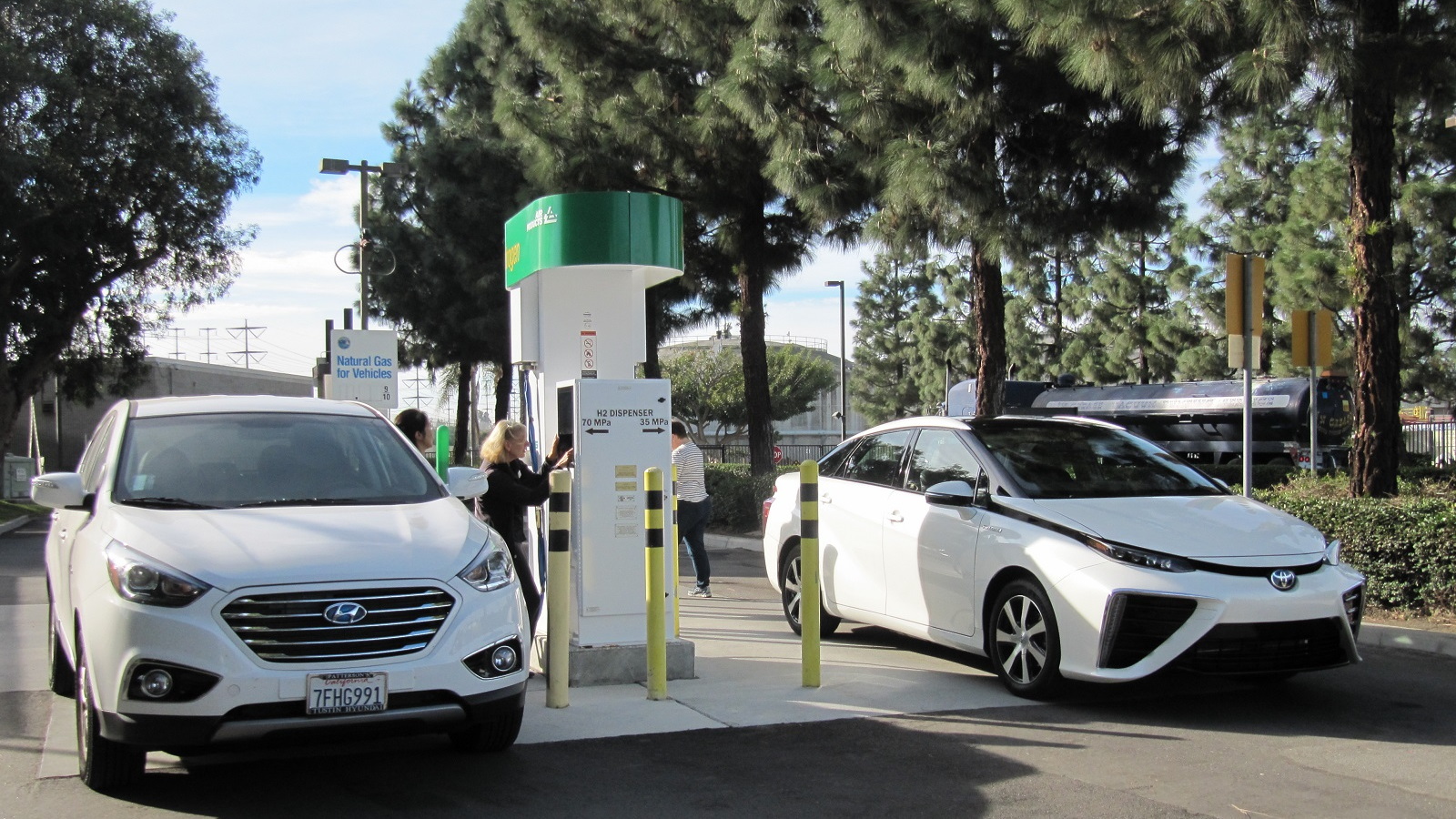 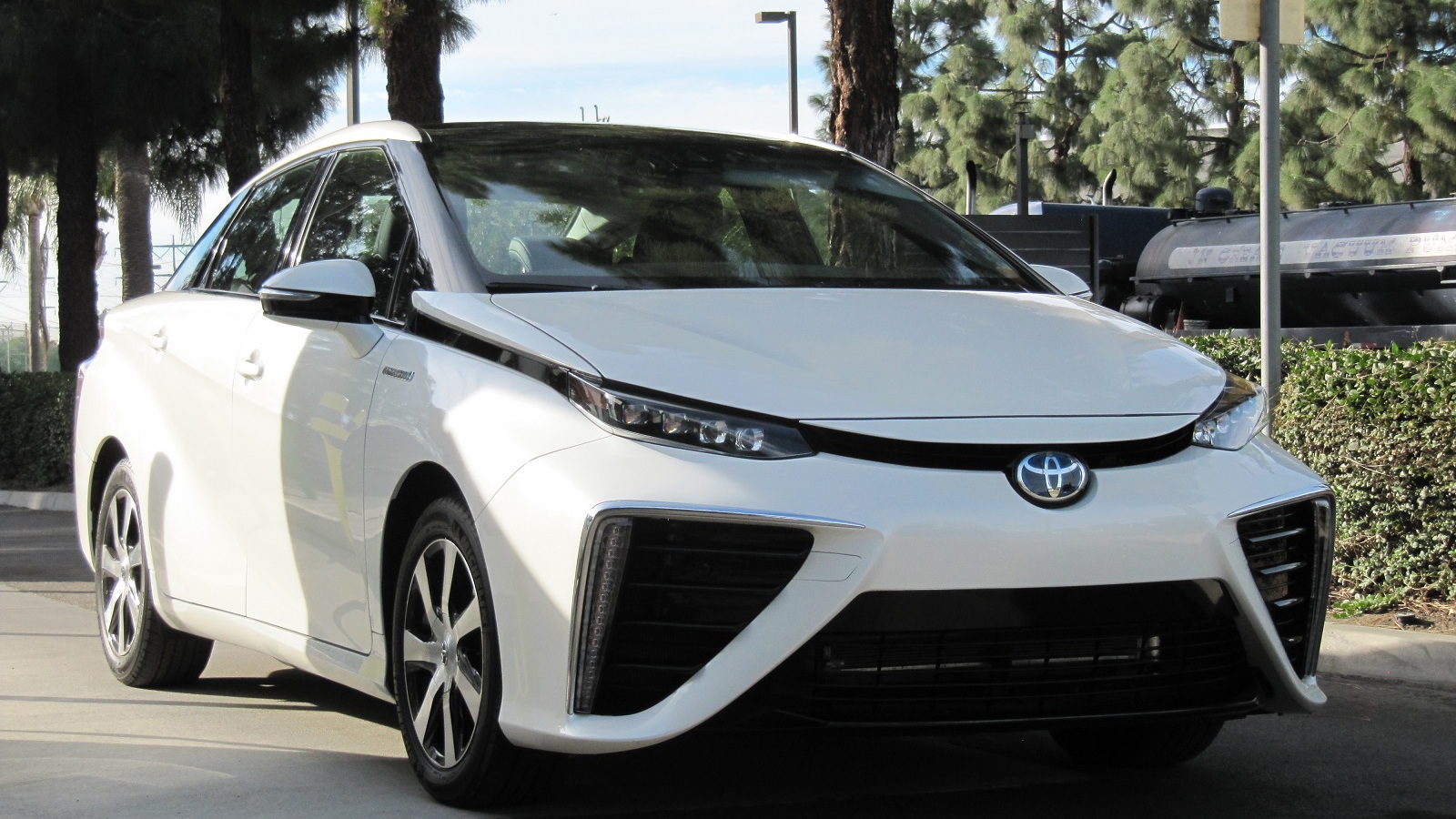 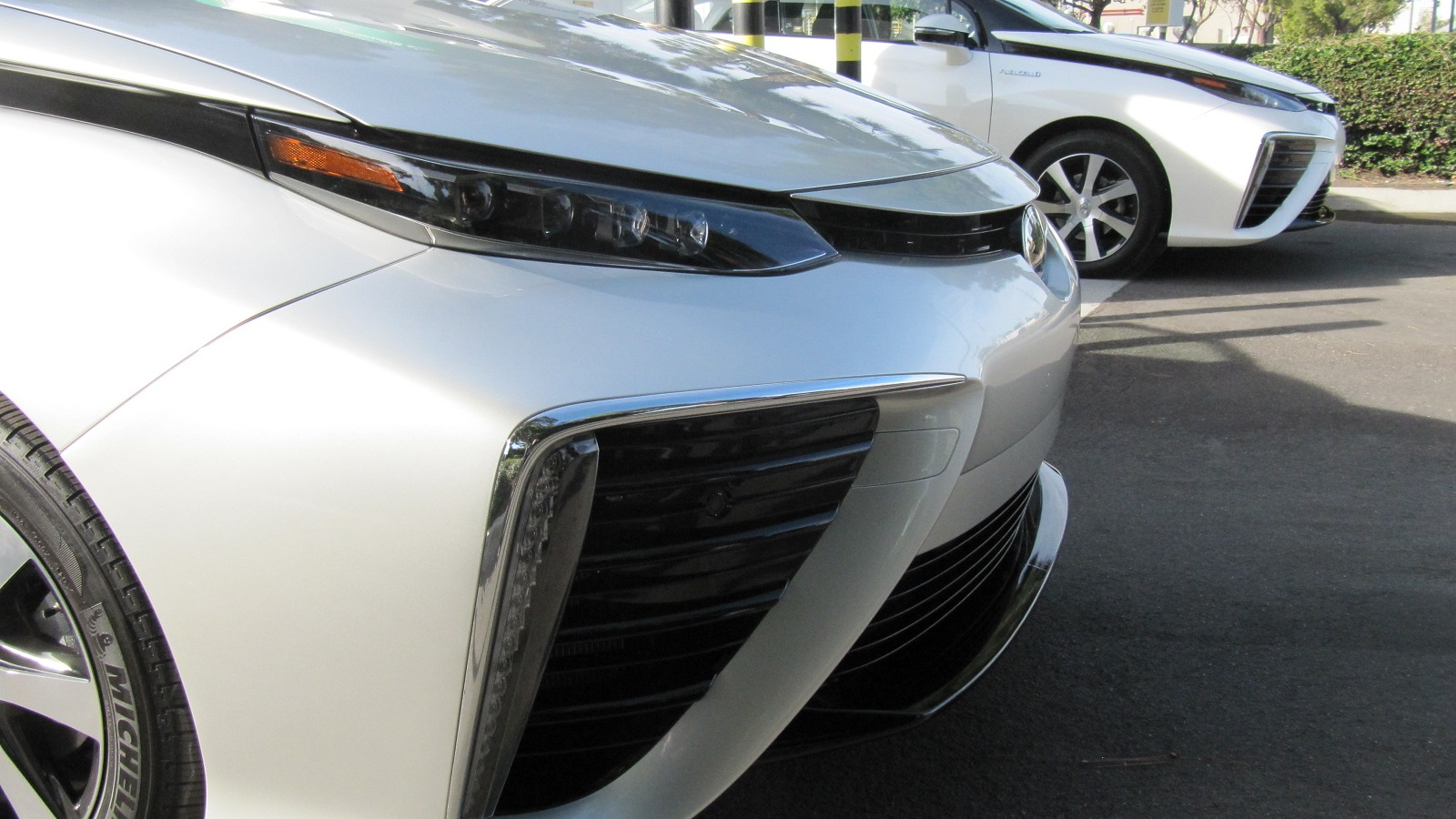 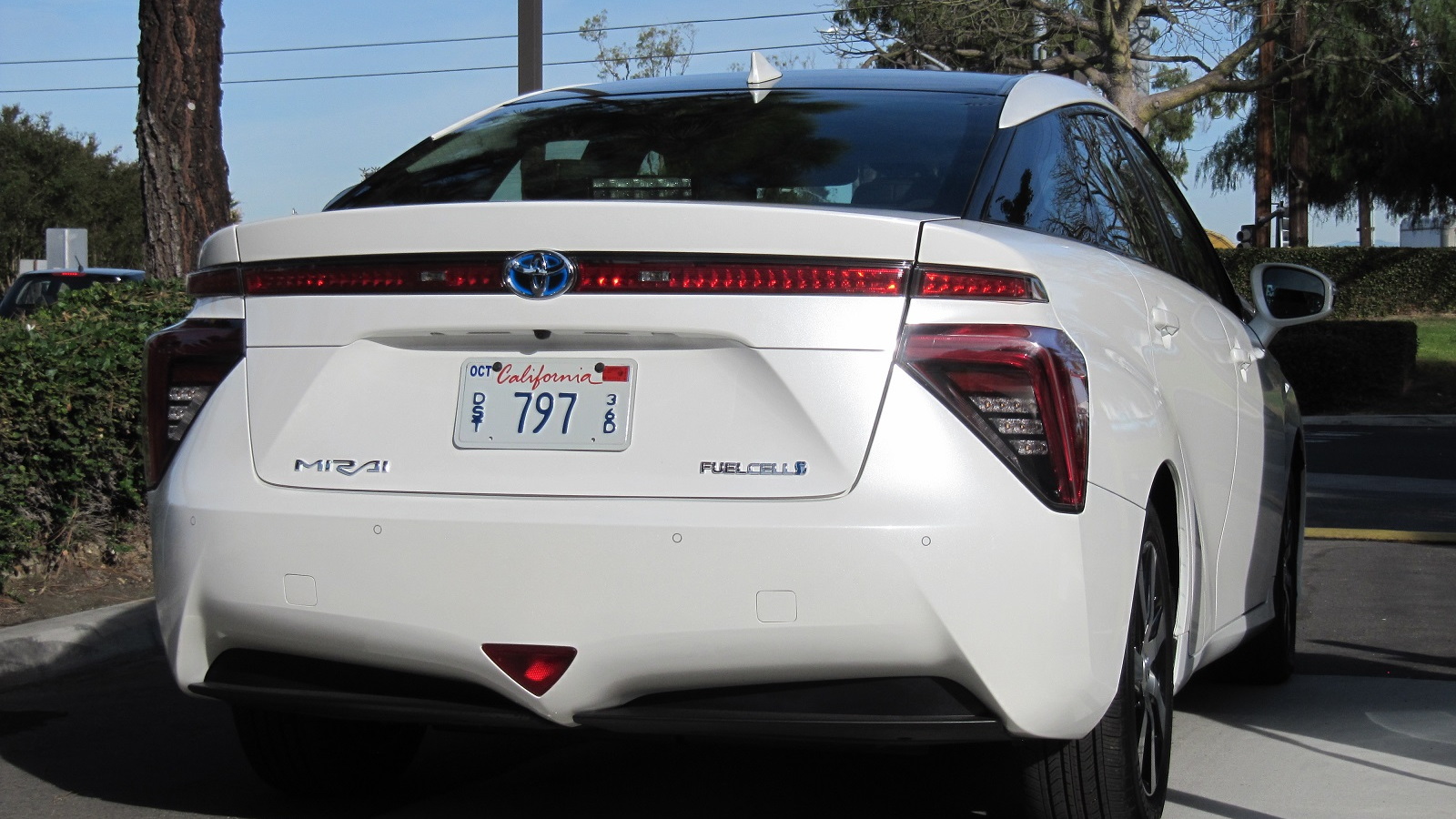 The 2016 Toyota Mirai hydrogen fuel-cell car will get a huge amount of promotion and attention from its maker, despite the very low numbers that will be built in its first years.

In that respect, it's very similar to the first Toyota Prius hybrid back in 1997--a first sketch of what a future powertrain may promise.

But what's it actually like to drive, as a car?

Perhaps not surprisingly, the answer turns out to be rather like a Prius, only quieter.

To put it politely, the styling of the Mirai is polarizing. Asked about its genesis, North American Toyota executives said only that they had not had any input into the design.

Others found it unappealing, with a number commenting on what was perceived as a cacophony of shapes, accents, curves, swoops, and angles.

The best view to our eyes is looking down on the hood when centered in front of the car.

The Miari's side profile is best viewed in a light color, where the clash between the exaggerated accent lines and the relatively small 16-inch wheels is less apparent.

The rear-end styling is rather less successful; it clearly has an aerodynamic purpose, but the various shapes look like nothing else, short of some of the darker corners of auto shows containing the most extreme concept cars.

Inside, the seats are comfortable, though there are only four of them. The weight of a fifth passenger was deemed undesirable for range and performance. The seating position is fairly upright--rather like a Prius.

The interior materials are a mix of hard plastic, as in the Prius, and soft surfaces.

The Mirai has no fewer than three separate color display screens in its dashboard. They're slightly less Space Age-y than the rather scattered displays in the current Prius, though you won't mistake the Mirai's interior for that of a conventional car.

A vehicle information center at the base of the windshield in front of the driver, and two more centrally positioned: a larger one for audio and apps data protruding from the top of the substantial center stack and console, and a second one lower down that displays climate-control system information below the shift lever.

The starting procedure, too, is reminiscent of a Prius: Fasten seat belt, foot on brake, press button, wait for displays to power up, and move the lever that protrudes from the middle of the center stack to "D".

It took us a while, however, to work out that a round button marked "P" was the parking-brake release. The Mirai also has Toyota's three drive modes available: Normal, Eco, and Power.

Both cars move away from a stop powered by an electric motor, though of course the Prius will switch on its gasoline engine under harder acceleration or if there's not enough energy in its battery pack.

The Mirai accelerates smoothly, if not particularly fast, with a 0-to-60-mph time of just under 10 seconds. Like a Prius in electric mode, the dominant sounds are tire noise and a bit of whine in the background.

The 4,056-pound Mirai feels heavy from behind the wheel, but solid.

Under the hood, the electric motor driving the front wheels sits below both the power electronics and the various compressors and plumbing for the hydrogen and oxygen that feed the fuel-cell stack.

The stack itself is located under the front seats, while a pair of hydrogen tanks hold 4.7 kilograms (10.4 pounds) of hydrogen compressed to about 10,000 psi.

The larger tank is located between the rear wheels, while a smaller secondary tank sits under the rear seat, both mounted transversely.

The ride is comfortable and smooth, aided by the relatively tall sidewalls of its tires.

Like the Prius, the electric power steering in the Mirai is relatively numb, with little feedback from the road--but it goes where it's pointed without fuss or drama.

It's not a car that invites being tossed around corners for the hell of it--it's no Mazda, say--but we also didn't push that hard in the six hand-built prototype Mirais that were offered for hour-long drives on preset routes through suburban Southern California.

We did notice that the Mirai--like the Hyundai Tucson Fuel Cell we tested a year ago--has only marginal power for overtaking at freeway speeds.

Fuel cells don't instantly spool their power output to match demand, so at speeds up to 26 mph, the Mirai will supplement the power coming from its fuel cell with additional power from its 1.6-kilowatt-hour lithium-ion battery pack.

The fuel cell is rated at a maximum output of 114 kilowatts (153 horsepower), which isn't all that much for a 2-ton vehicle.

At this stage in auto technology, it's an unavoidable fact that a zero-emission vehicle--be it hydrogen powered or battery-electric--will weigh more than a conventional gasoline car.

Conventional mid-size sedans weigh 200 to 600 pounds less and customarily have at least 160 hp, sometimes as much as 280 hp--so the Mirai won't win any drag races.

On the other hand, that very first Prius was pretty slow too.

Unlike the Prius, which--tire noise aside--is relatively quiet when running electrically, the Mirai generates a number of different noises in the background.

From talking with Toyota engineers after our hour-long drive, it turns out there are four different sounds that passengers may hear on top of tire noise, wind noise, and motor whine.

A high-pitched whir (we called it a "wheeze") is the air compressor that feeds oxygen into the fuel-cell stack; it varies with the power demanded from the stack.

A slightly oscillation or vibration is the hydrogen compressor pump; it too varies with power demand.

A rapid pulsing noise up to about 20 mph is the injectors that feed hydrogen into the stack, though it vanished as noise level rose with speed.

And finally, there's an occasional exhaust whoosh as the car exhausts water vapor out the tailpipe under the rear valance.

Toyota says the Mirai is 30 to 35 percent quieter than the hydrogen Highlander Hybrid development cars from several years ago.

But to our ears, the prototype Volkswagen Passat HyMotion we drove at the Los Angeles Auto Show three days later was quieter.

That water vapor, by the way, is also collected in a condensor holding tank, depending on the car's operating parameters and the temperature outside--the goal is ensure it doesn't freeze inside the stack.

When the Mirai is underway, it may dump that water. There's also a button on the left underside of the dash that lets the driver do that, presumably in a place where a small stream of water won't freeze.

While various ads have shown people drinking the water that's emitted from hydrogen fuel-cell cars, Toyota specifically warns users not to do that.

The reason is that the exhaust pipe is effectively open to the elements, so there's the possibility of road dirt or other contaminants collecting in the pipe--over which that clean water would pass before it could be collected and consumed.

You have been warned.