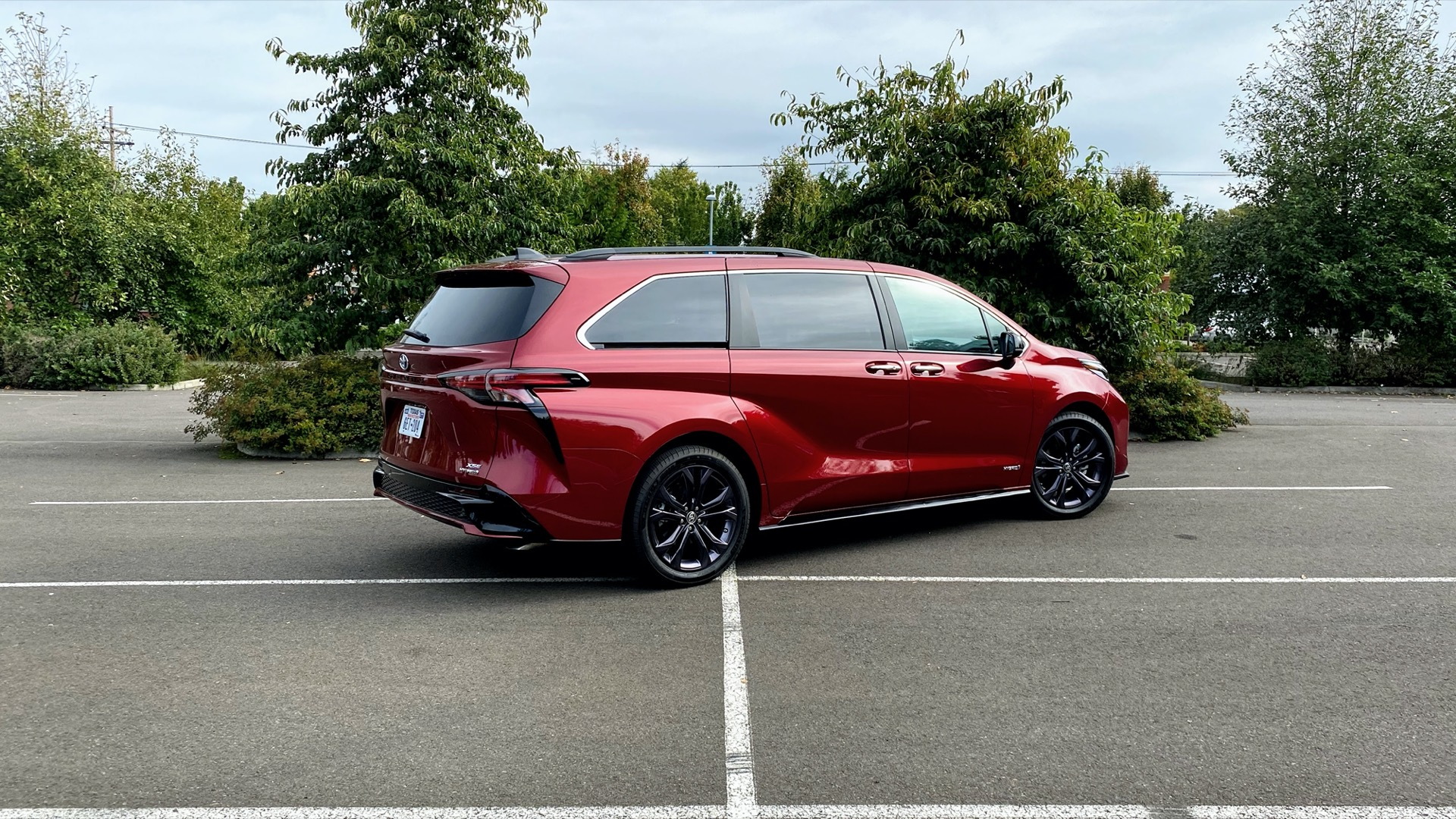 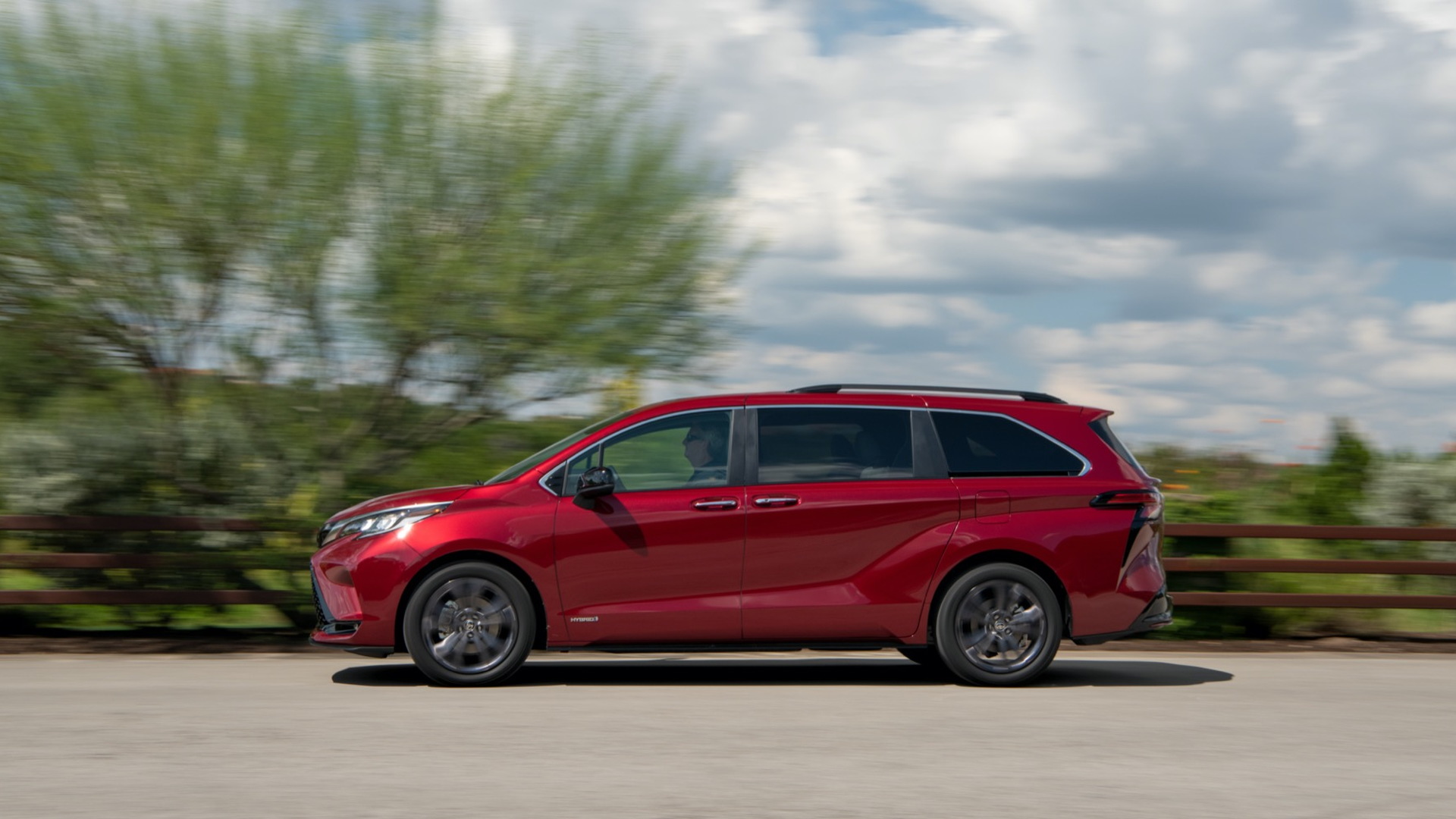 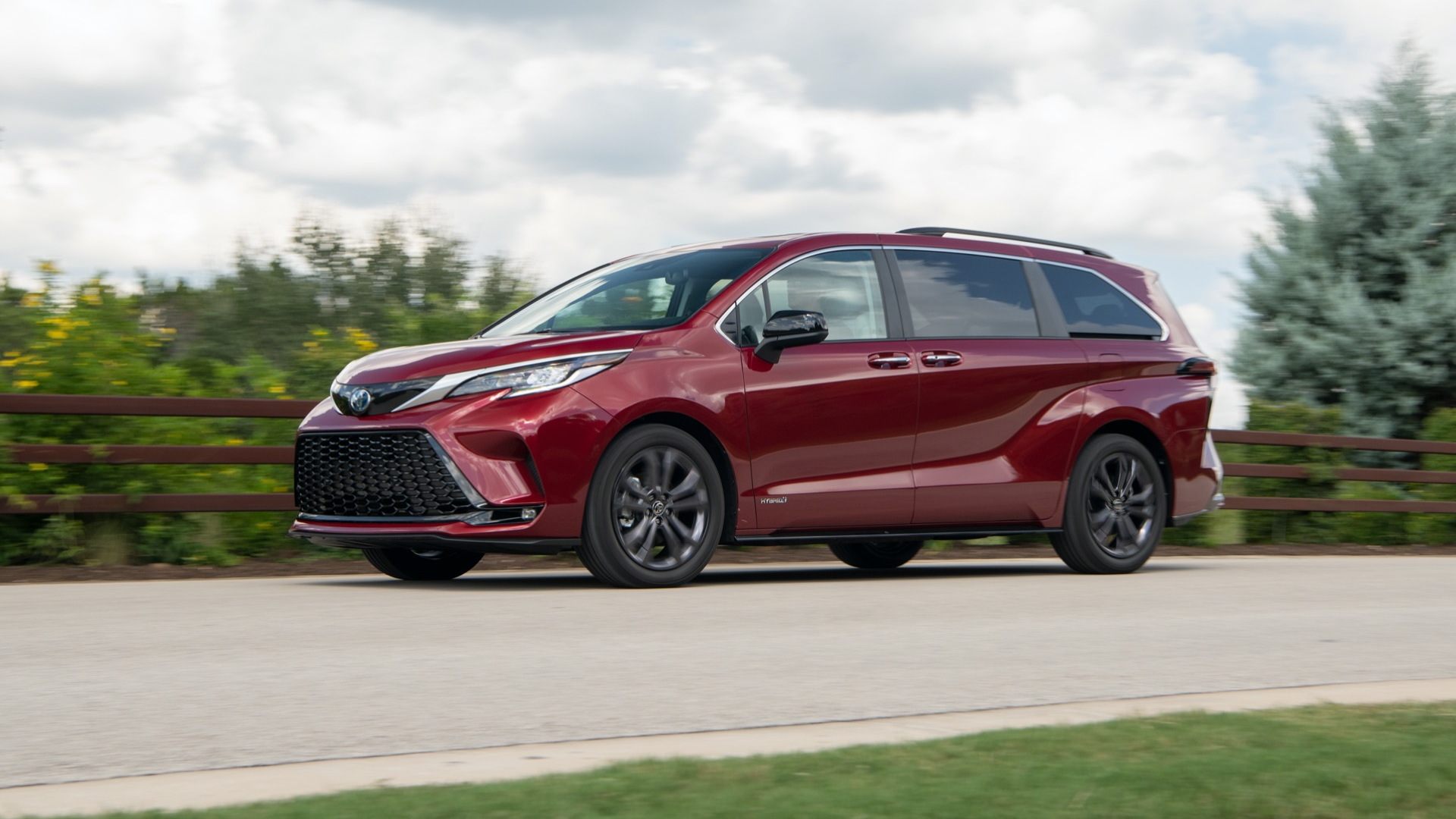 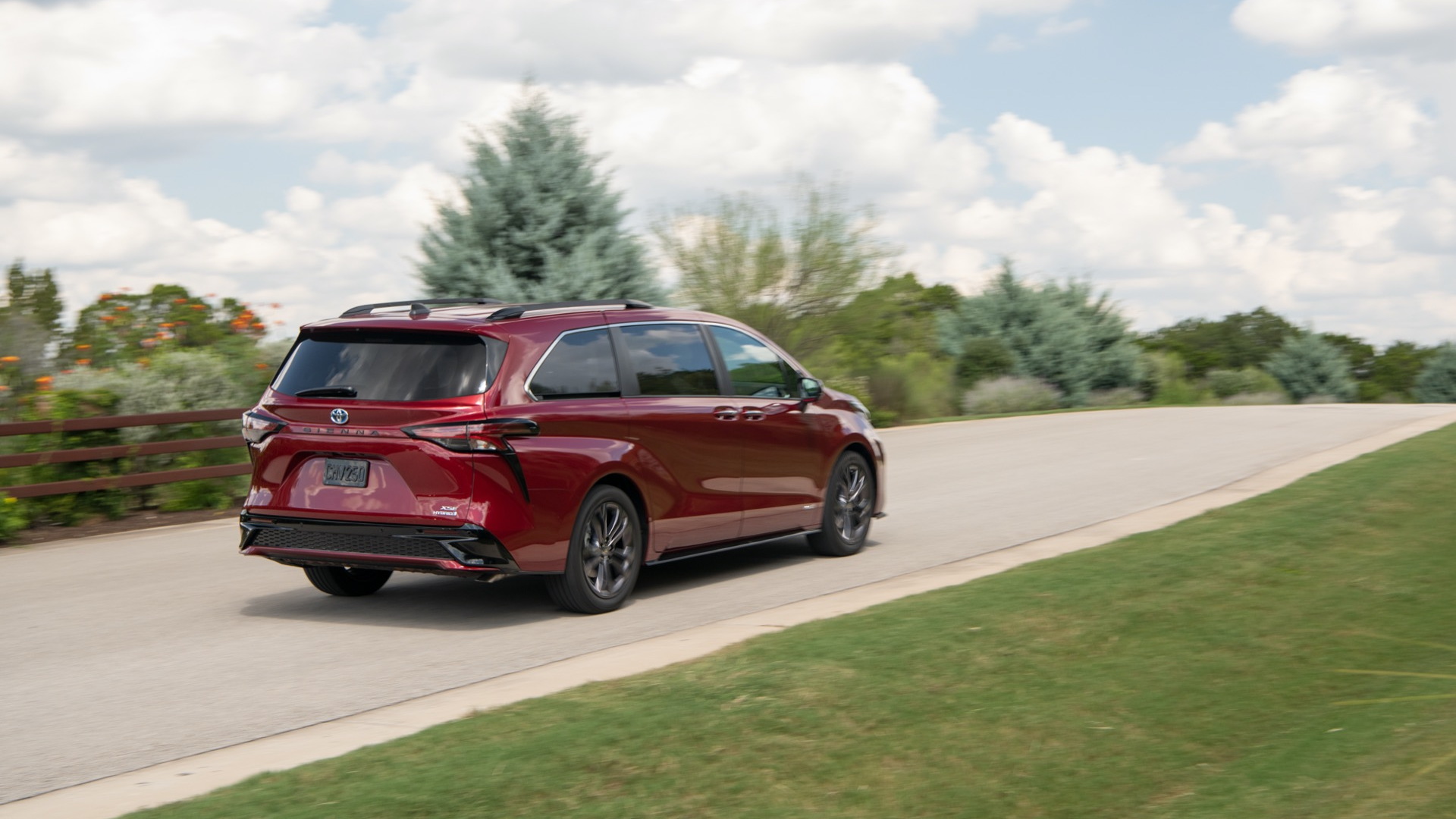 If Toyota’s minivan goes hybrid and sips fuel at 36 miles per gallon, is the era of the “swagger wagon” over?

After spending a couple of days with the 2021 Toyota Sienna, I’ll roll my eyes to swagger but give a solid nod to the newfound interior design sensibilities of this 7- or 8-passenger van.

Toyota went in strong with the third-generation version of its Sienna minivan—debuting for 2010, respectively, and spanning for most of the decade that memorable marketing campaign, which amounted to a little bit of design attention and a whole lot of self-deprecating humor. Now with the new fourth-generation model it’s finally embraced a whole Pinterest board of great ideas, and some realities about the future that make this package relevant again.

One of those realities is that a big V-6 engine and city mileage ratings below 20 mpg just aren’t going to make the cut anymore in a daily-driving family hauler, no matter how convenient the sliding side doors and easy entry and exit might be. With an EPA-estimated 36 mpg combined—up from 20 mpg combined for 2020—the Sienna almost certainly nabs the most improved mileage of any new vehicle nameplate this year.

Although it's fair to point out, many will look past the hybrid to a Sienna Prime. No plans, says Toyota.

Why hasn’t the Sienna gone hybrid sooner? Families who love the minivan really tend to love the minivan. As chief engineer Monte Kaehr confirmed this month in a virtual presentation, many households who buy a Toyota Sienna end up being repeat owners—first when they have kids and an active family, then again as empty-nesters.

It’s that virtuous circle that likely prevents automakers from getting too daring with their minivan remakes—which is why Toyota didn’t completely reconceive the Sienna’s shape or packaging but there’s plenty of evidence of a thoughtful redo throughout. And the Toyota hybrid system is well-proven for longevity and reliability.

Perhaps it’s my 40-something dad credentials shining through, but this Sienna feels far more comfortable, accommodating, and sparingly stylish in the same way as the tracksuits and sweats many of us have been wearing in recent months as we work from home, at least sometimes.

From the bridge, a different view

Starting inside—where it counts, really—a “bridge console” between the driver and front passenger helps give them their own personal space, and a two-tiered storage concept for smaller pieces up above and a tray down below that’s large enough for handbags. In addition, there are storage trays midpoint up the doors and a long tray that wraps most of the way across the dash, offering a wireless phone charger midway under the 9.0-inch touchscreen that is flanked by rotary knobs and physical buttons.

The sense of proportion inside feels different, even if it hasn’t changed much on the outside. I’d just driven Toyota’s Highlander Hybrid the previous week, and with plenty of drive time in present and past versions of the Sienna the dash feels lower yet closer to the driver, affording good forward vision. Toyota’s lowered the floor an inch, while pushing the ceiling up nearly as much, and the net effect is an airier feel.

In a minivan every little space is used, and in order to maintain the low, continuous floor for seating and cargo there aren’t very many places you can put the 1.9-kwh battery. Toyota concealed it under the front seats, with only the air intakes for cooling noticeable when getting in and out.

The Sienna was surprisingly in its element on a rather demanding, curvy road, and I’d venture to say it rivals any crossover, and tops most, for composure and ride quality. After the Highlander, its body motions felt tidy, and road noise was a full step quieter. Despite being roughly the same length and weight, the light, quick-ratio steering and suspension tuning made the Sienna feel more nimble, with a sense of maneuverability and a hint of sportiness.

And despite some level of firmness from the Sienna’s chassis, which is all-new according to Toyota, the interior felt quiet enough to carry on a conversation with my daughter in the second row—without the “Driver Easy Speak” PA system—in this case, speculating about why the sunset sky was so spectacularly red. While the forest fires had their part, I suspect vehicle particulates do, too [nudge, nudge].

Powertrain direct from the Highlander

The hybrid system, which Kaehr confirmed has been transplanted almost identically from the Highlander Hybrid, feels adequate for power but little more; there’s enough zip for a sprint to 60 mph in what I’d guess to be about 8 seconds. It’s slower than the former V-6, but quite a feat considering its much, much lower thirst.

Toyota says that it’s worked both on the directness of the acceleration and the way the brake pedal responds; the brakes especially are very smooth and progressive now, with no low-speed grabbiness.

By moving the shift lever to the left and tipping it forward or back (+/-), you can manually select a series of “gears” that don’t seem to help significantly with available acceleration. Selecting a lower “gear” increases the regenerative braking that’s available for sending power back to the hybrid battery, Toyota says, but the difference was barely noticeable going down a steep grade.

But oh what a difference the hybrid system can make at the pump. Over a 52-mile out-and-back loop that tends to show the strength of hybrids—with varied speeds, many small hills, and a 700-foot gain at its midpoint—I averaged an excellent 38 mpg.

Mileage on the open highway won’t be the same kind of life-changing experience to those repeat buyers. Over a 115-out-and-back loop on a mostly level stretch of freeway, on a calm, 68-degree day, setting the cruise at 71 mph (to go an indicated 70), I averaged 32 mpg. That’s better than the 29.5 mpg we averaged in more than 1,600 miles without a charge in the Chrysler Pacifica Hybrid, but the Chrysler was loaded down and driven faster much of the time.

Over the remaining 94 miles, including a nearly 50-mile suburban driving loop and some crosstown errands, the test Sienna averaged 35 mpg.

The Sienna comes in LE, XLE, XSE, Limited, and Platinum models—each offering front-wheel drive or all-wheel drive. All-wheel-drive models add a 54-horsepower over-the-road motor in back. With it or not, the system makes 245 hp altogether, as a 180-hp electric motor and 189-hp, 2.5-liter inline-4 engine factor into Toyota’s hybrid-drive wizardry. All versions of the Sienna can be equipped to tow 3,500 pounds.

What makes this remake so radical isn’t that there’s a hybrid Sienna. That’s been long overdue, and the hybrid system’s well-proven. It’s that Toyota has no intent to bring the V-6 back, and the hybrid’s the only way to get it.

If you want the 8-passenger layout—with a bench seat in the second row—you’ll need to go with the base LE (in front-wheel drive or all-wheel drive), or the XLE in FWD. The other models have variations of the 7-passenger layout, with two different types of captain’s chairs in the second row, including available super-long-slide versions that have a total of 25 inches of variability for an incredible amount of legroom. Top Limited and Platinum (FWD) models add an ottoman-style extension.

The third-row seats easily fold downward into a rear well, enabling a large, flat cargo area behind the second row. The captain’s chairs slide and flip forward to enable a lot of continuous cargo space without their removal. Toyota even shows that you can fit a 4x8 sheet of plywood in the Sienna—albeit at an angle, with the sheet actually resting next to the driver’s head.

My XSE tester came with premium audio with dynamic navigation, while the Limited and Premium models step up to a 12-speaker JBL setup. An entertainment system with HDMI input, optional on the XLE and above, offers a remote and two wireless headphones and a fold-down 11.6-inch display. All versions come with satellite radio, and they’re all compatible with Apple CarPlay, Android Auto, and Amazon Alexa.

There are a total of seven USB ports throughout the cabin, including one that’s just in front of the driver, next to the power button. And a grand total of 18 cupholders.

Calling out to the charging averse

Clearly appealing to the portion of its audience who still might be apprehensive of charging cords, Toyota writes in its press materials: “Critically, the Sienna has no plug, and there is no need to ever recharge the hybrid battery pack, and certainly no need to spend a couple of thousand dollars installing a battery charger in a garage.”

Critically, we truly hope Toyota’s working on a Prime version of this vehicle, as then it might soundly beat the Chrysler Pacifica Hybrid. Until then, the Pacifica Hybrid poses a unique proposition in the market, as it’s able to travel more than 30 miles all-electric.

The piece about the Sienna that remains radically different than anything in the minivan sector yet is that the hybrid model is no narrow niche. This is the future. So parents, get your swagger on.