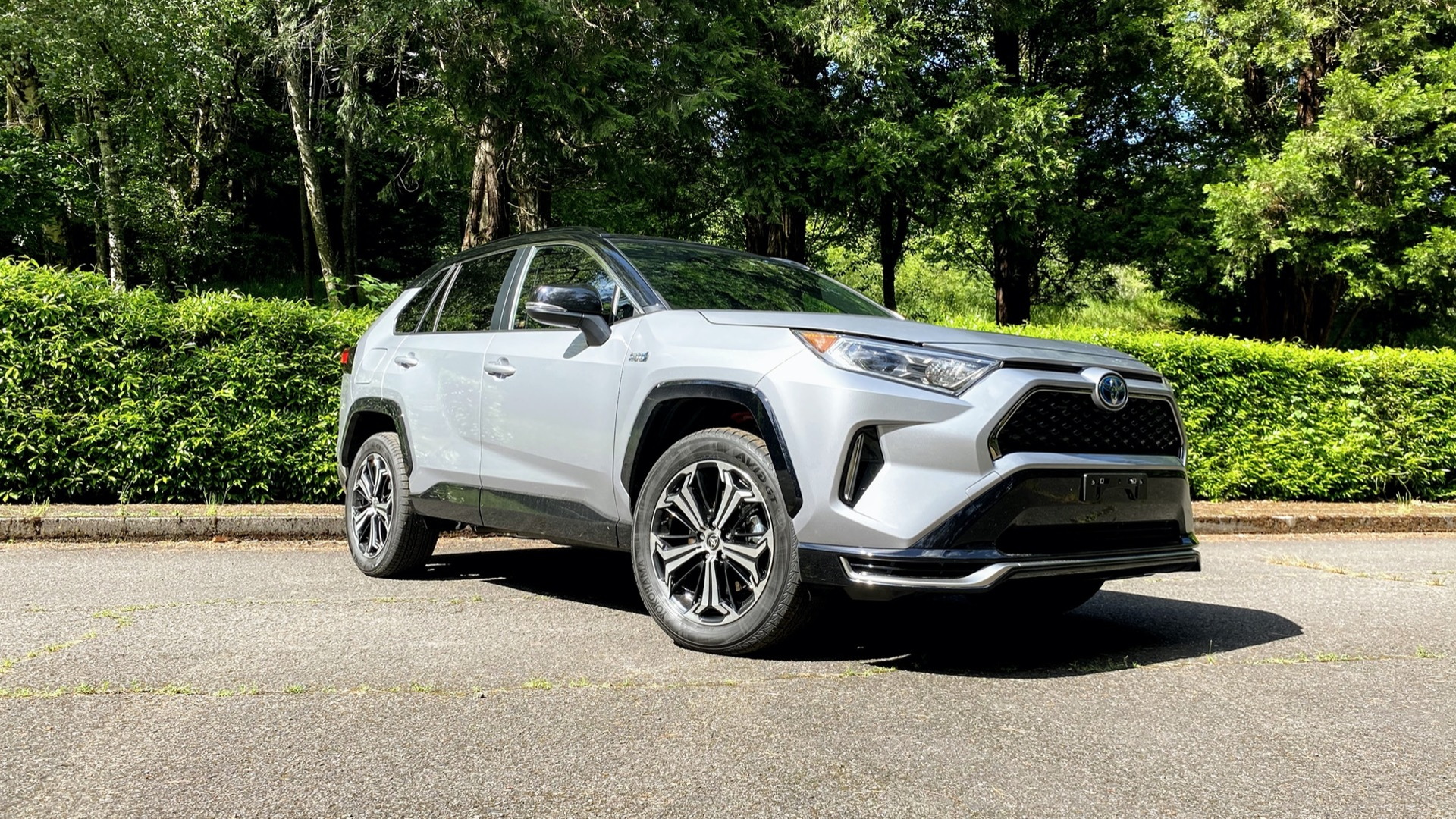 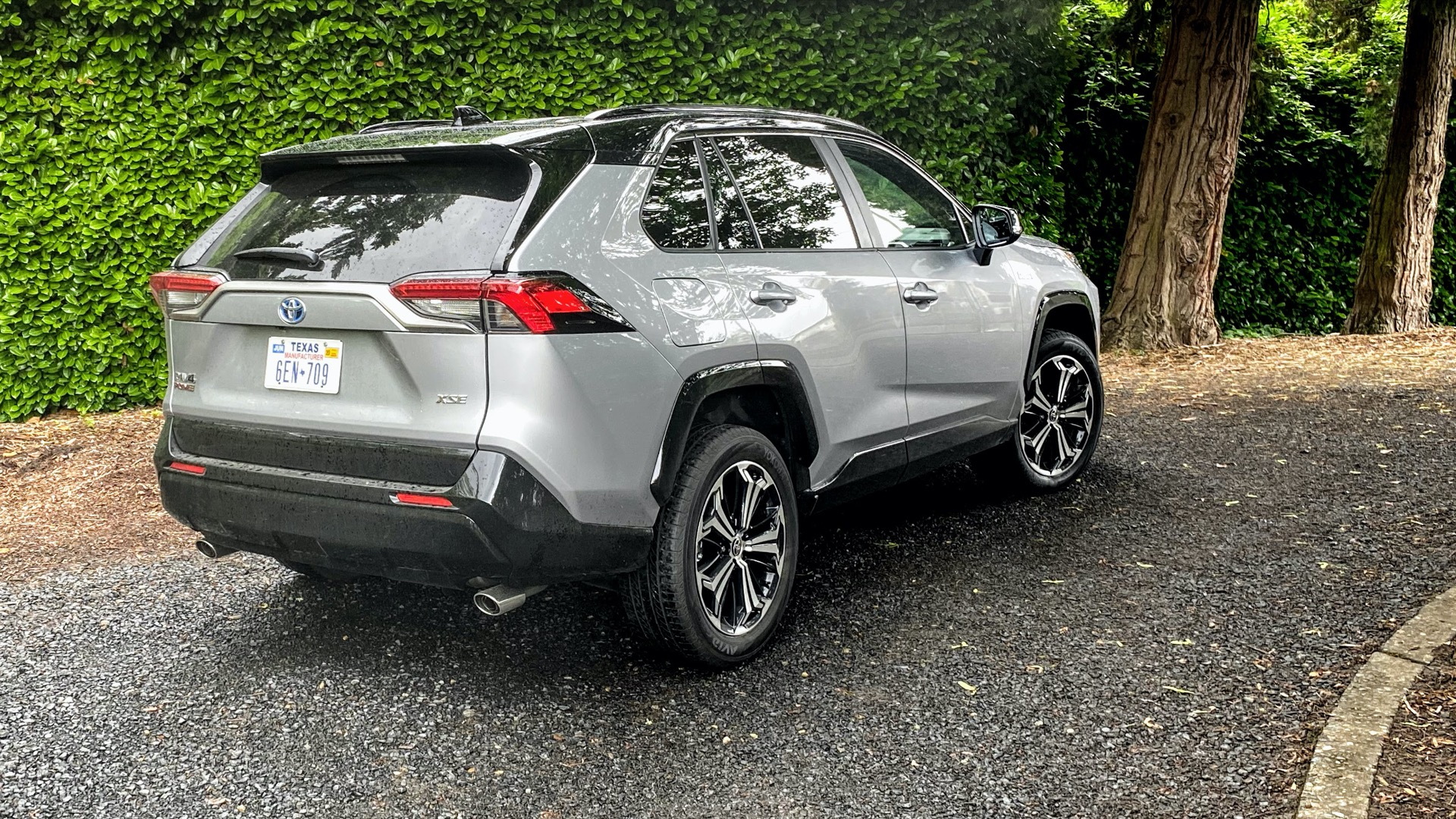 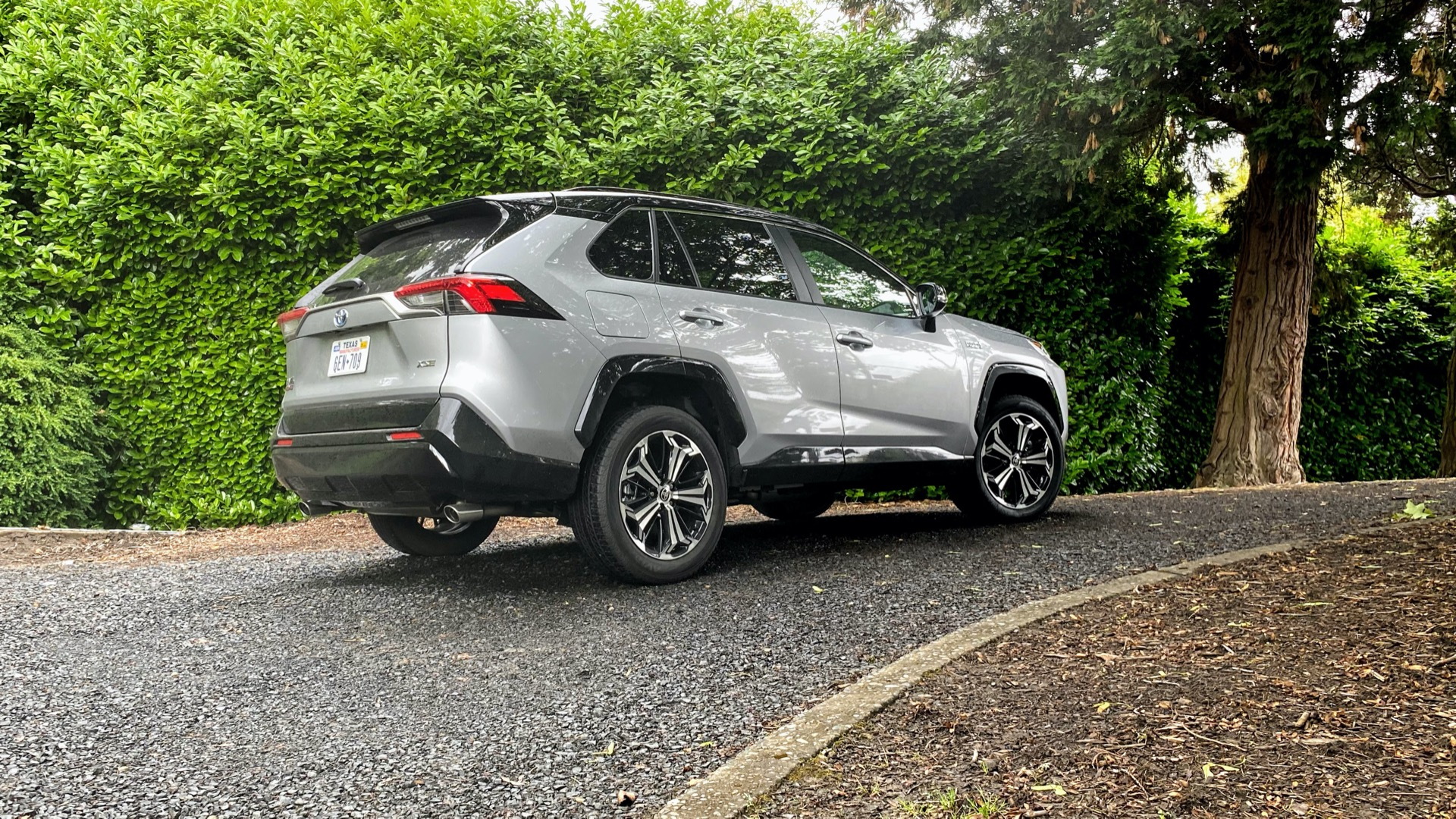 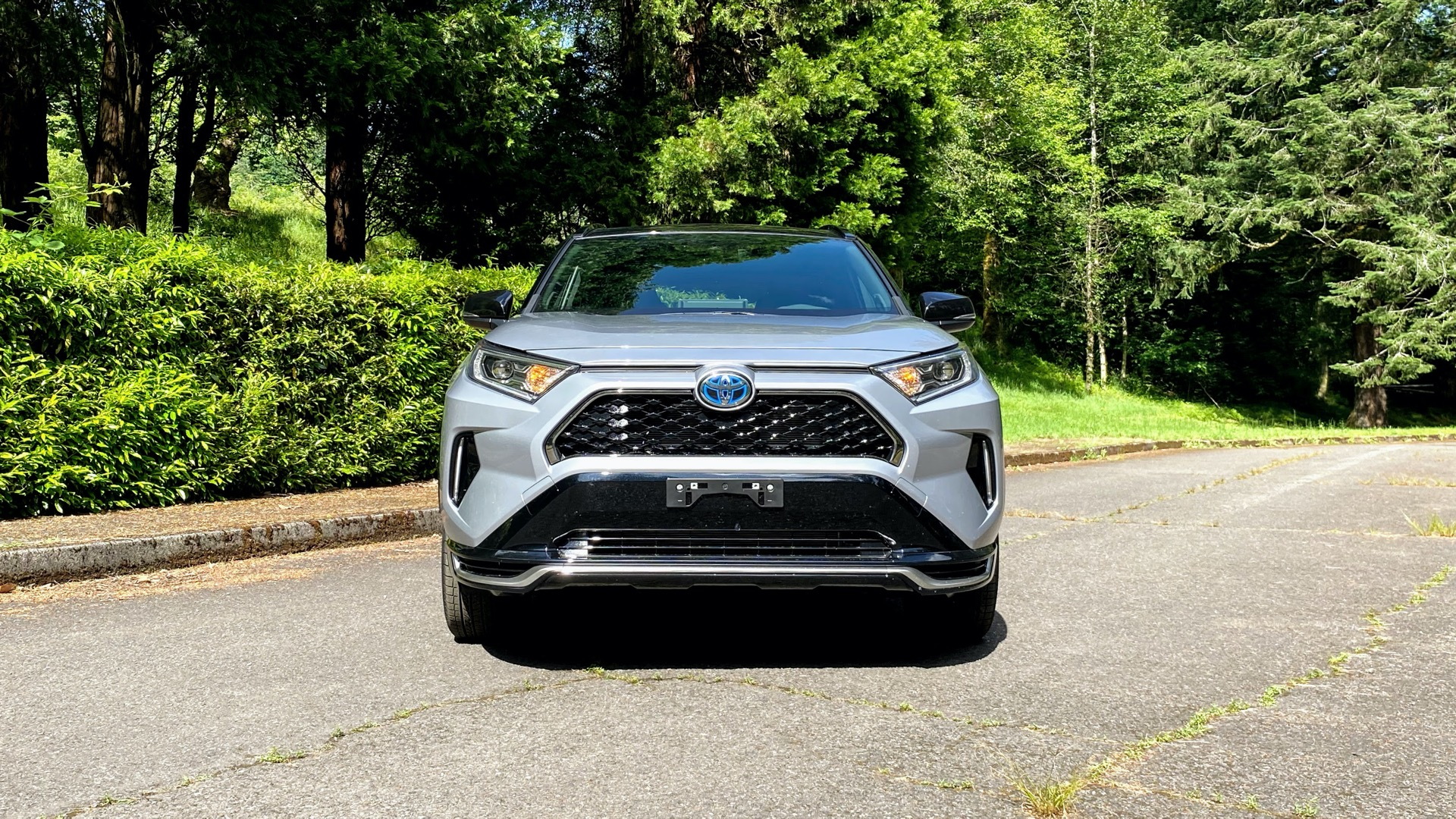 Right about the time I’d passed 30 miles of all-electric driving with the RAV4 Prime plug-in hybrid, I knew this experience was going to be different. There was plenty of charge left.

With an expected EPA-rated 42-mile range from a big 18.1-kwh battery pack, the RAV4 Prime promises to transport commuters to work and back again without tailpipe emissions or the need to find another charge along the way. And then it becomes a 38-mpg hybrid after running through the charge,

That and the Prime's suggested availability across the U.S., not just in California or a few select states, means it picks up right where the Chevy Volt left off.

Even better, it is the hottest crossover in these crossover-crazy times. The RAV4 is not only the top-selling SUV in the U.S. market for three years; the RAV4 Hybrid was also the top-selling hybrid in America last year—handily outselling the Toyota Prius.

The Prime finally checks nearly all the tech and special-needs boxes. It has a heat-pump climate-control system with resistive heat that doesn’t require the engine to come on in the winter. It has all-wheel drive, and can even tow 2,500 pounds.

As I recently discovered over three days and more than 250 miles with the RAV4 Prime it lives up to its billing.

All-electric for the commute—and then some

Fresh off a first charge and with real-world range a top priority, I tested out three carefully planned routes (leaving the climate control set to 72 degrees F in each, albeit in mild weather ranging from 59 to 70 degrees F). First, I did a mixed loop that included nearly 20 miles of leisurely inner-Portland street-and-boulevard driving, mostly at 30 to 50 mph, followed by as much go-with-the-flow freeway driving from outer suburbs back into downtown freeway loops (which ended up being 50 to 70 mph) as it would handle in EV mode. In all I covered more than 30 miles of freeway driving, ranging from 50 to 70 mph, simply moving along at the speed of traffic (and using the cruise control when possible). My grand total on plug-in power alone was 52.5 miles.

Next up was a highway loop. I chose a stretch of highway that was free-flowing in the evening and moved at 55 to 75 mph, with the average likely around 65. There, EV mode lasted 41 miles.

Finally, I did what I would call a more vigorous commute loop, with the same initial 20 miles as the first loop, followed by an 8-mile stretch with poorly synced traffic lights, 10 miles of up-and-down 45-mph backroads, then city streets ranging from 25-40 mph for the remainder. Here, the RAV4 Prime’s EV mode lasted 47 miles.

Those loops corresponded to trip efficiency ratings of 3.2, 2.6, and 3.1 miles per kwh. Yes, I know it doesn’t quite add up, but that must signal that the system is switching out of EV mode with slightly different amounts of capacity left each time.

The maximum speed in EV mode is 84 mph. I was mostly going for efficiency during the time I drove the Prime and didn’t go much beyond 75 mph. But I can report that flooring the accelerator pedal (or close to it) in EV mode doesn’t unduly fire up the engine.

The Prime feels plenty perky in its EV mode, where the throttle response and general power on tap felt a lot like our first-generation Leaf. On plug-in power, the Prime accelerates to 60 mph in 9.2 seconds officially, which is only 0.9 seconds more than what Toyota cited for the 2016-2018 Hybrid. It feels even quicker than that, probably partly because you’re not hearing any engine drone, but I suspect its 0-30 or 0-40 mph acceleration to be quite close to that in Hybrid mode.

When the system switches over to Hybrid mode, it becomes surprisingly quick. With the engine on, it can get to 60 mph in just 5.7 seconds and is the quickest RAV4 ever, as well as the second-quickest vehicle in the Toyota lineup behind the Supra.

Its 302-horsepower total system rating is an 83-hp increase over that of the RAV4 Hybrid, and yet according to Toyota that doesn’t come with any significant physical differences in the layout of the hybrid system itself or the motor units. Without any electric power, it’s almost as efficient as the 40 mpg combined in the RAV4 Hybrid—at an estimated 38 mpg combined. With the Atkinson-cycle 2.5-liter inline-4 tuned only slightly different (making 177 hp and 165 lb-ft on its own), and the front and rear motors making 179 and 53 hp, respectively, the key component added to the Prime—other than the bigger battery—is a second boost converter that allows more power to be drawn from the battery quickly when needed.

What separates the Prime in Hybrid mode from the RAV4 Hybrid, which I’ve driven several times, is the immediate power delivery once you press the accelerator.

Although Toyota’s bragging rights regarding the RAV4’s acceleration are justified, the RAV4 Prime otherwise feels well-mannered but not particularly sporty.

Inspired by a one-sheet Toyota placed in the vehicle claiming that consumer research showed the Prime outperformed the Porsche Macan in almost every category (source not disclosed), I headed out on one of my favorite curvy backroads. The good grip from the Yokohama Avid GT rubber proved a positive, and partly concealed some queasy motions from the suspension when pressed harder on undulating pavement.

There’s no disguising the Prime is much heavier than the RAV4’s original template—about 4,300 pounds as tested in XSE guise, versus about 3,800 for the RAV4 Hybrid or 3,500 pounds for the non-hybrid RAV4.

Toyota says that it needed a higher level of refinement in the Prime versus the rest of the lineup. To help hush the interior during EV mode, where you might notice road and wind noise more, the Prime has laminated front side windows plus additional sound damping.

The rear motor is primarily used to gain traction at low speeds. On a full throttle Hybrid mode start with the pavement slightly damp, there was essentially zero wheelspin and a very quick launch; but by the time we reached 40 mph the power distribution had shifted mostly or entirely to the front wheels.

And that’s really the only time you might notice the power transitions between electric and gasoline sources. Like most Toyota hybrids of the past two decades, the transitions are seamless with the exception of hearing the engine note some of the time.

A few puzzling details, but a great road-trip machine

Brake-pedal feel was much like that of other Toyota hybrids—maybe a bit on the soft side, but blending in regenerative braking in a progressive way that made it easy to come to a stop without judders.

On a steep descent, I noted that Hybrid mode provides surprisingly little regenerative braking, or anything approximating a low gear (what used to be called ‘B’ on Toyota hybrids). With steering-wheel paddles included on XSE models, a click of the left one temporarily raised revs and was useful for quicker power delivery out of the next corner but seemed to have nothing to do with added regen—leaving me to ride the brake pedal to achieve the desired level.

In EV mode, the paddles serve a different purpose. There, a click of the left paddle does increase regen somewhat—although that also seemed to time out.

To finish the efficiency impressions, I did some carefully considered loops in Hybrid mode, too. As with any tall, rather boxy vehicle, the RAV4 Hybrid can’t boast to be particularly fuel-efficient in long-distance highway driving. Over 64 miles of out-and-back Interstate highway driving, going 70 mph one way and 65 mph the other, I averaged just below 35 mpg, according to the trip computer. And then over 63 miles—trying to closely match the conditions to that first drive loop (the light commute)—we averaged 39 mpg on only gasoline.

The takeaway: It’s quick and refined, and you can take the family wherever you’re going a few times a year without the hunt for chargers, yet you can be all-electric the rest of the time.

The liquid-cooled pack, filled with 96 prismatic cells from Prime Planet Energy & Solutions, Inc.—the new joint venture established earlier this year between Panasonic and Toyota—took exactly 4.5 hours, limited by my test vehicle’s 3.3-kw onboard charger. Toyota says the available 6.6-kw onboard charger will shorten that to 2.5 hours—much closer to the time of a shopping stop or long lunch. Otherwise the Prime will charge up in 12 hours on a 120V AC outlet.

The two times we charged to full, our JuiceBox Pro 40 240-volt charger indicated 15.0 and 14.8 kwh inputted; although there’s a lot of potential inaccuracy in those numbers, they confirm that a rather large chunk of the battery is being saved for hybrid operation—and battery degradation—so as to keep performance the same over time.

Separately, there’s a Charge mode. In aiming to get a good take on the Prime’s efficiency and usefulness as a plug-in, we didn’t give that a full test, but it effectively lets you charge the battery back most of the way so you can enter an urban area sans tailpipe emissions.

According to the analog state-of-charge gauge in the instrument cluster, you use the upper 75% of the battery’s charge for EV mode. According to Toyota the lower portion of the charge assures that Hybrid mode acceleration should be exactly the same whether you have a full charge or haven’t plugged in at all.

Outside of the plug-in hybrid badging on the front fender, only the most dedicated RAV4 fans are going to see you as part of the electric revolution. There are a few subtle styling details, with a unique bumper and grille appearance and, on XSE models, vertical LED accent lights. A gloss-black bumper, chrome dual tailpipes, and LED taillights further separate the Prime, plus on XSE models there’s a two-tone roof.

The Prime offers a head-up display—the first ever offered in a RAV4—and a larger 9.0-inch touchscreen display that looked great at night but during the day seemed to lack the contrast of rival models. The system is compatible with Apple CarPlay, Android Auto, and Amazon Alexa, and comes with a three-month trial of Sirius XM satellite radio. And there’s a total of five USB ports.

The total storage in the Prime is 33.5 cubic feet with the seats upright, slightly less than the Hybrid due to the components and a slightly higher cargo floor. With the second row folded it’s 63.2 cubic feet. That compares with 37.6 cubic feet and 69.8 cubic feet, respectively, for the Hybrid.

That doesn’t mean rear seat room is in any way compromised. I’m 6’-6” and fit back there just fine; the front seats are also quite supportive.

There was speculation that the RAV4 Prime would follow the Prius Prime and come with a solar roof option. But according to assistant chief engineer Takeshi Miyaura, one of the top priorities for the project was that the roof opened, so the team didn’t plan on that possibility.

Feeling pretty positive about the RAV4 Prime? Here’s the reality check: Toyota is only planning on about 20,000 RAV4 Primes a year, after initially delivering only about 5,000 this year. Yet it’s a more enticing vehicle than the Hybrid in every way, and as we previously pointed out in outlining this model’s features and pricing, once you include the $7,500 federal EV tax credit and state incentives, it could cost less than the RAV4 Hybrid.

That could be a harsh reality for Toyota in misgauging pent-up demand. The Prime is really good. It’s what a plug-in hybrid should be and entirely worth the money. If Toyota will sell you one.