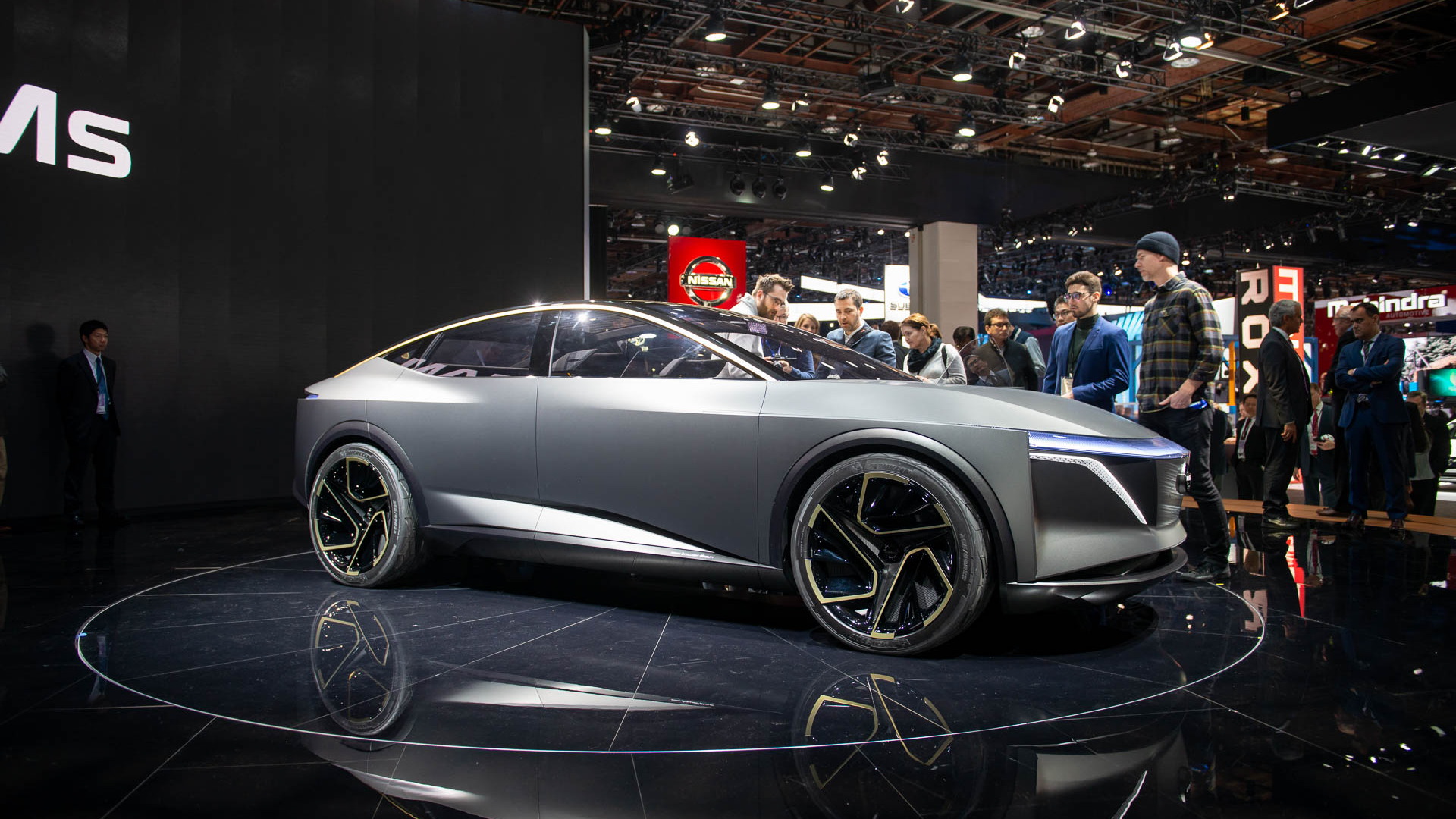 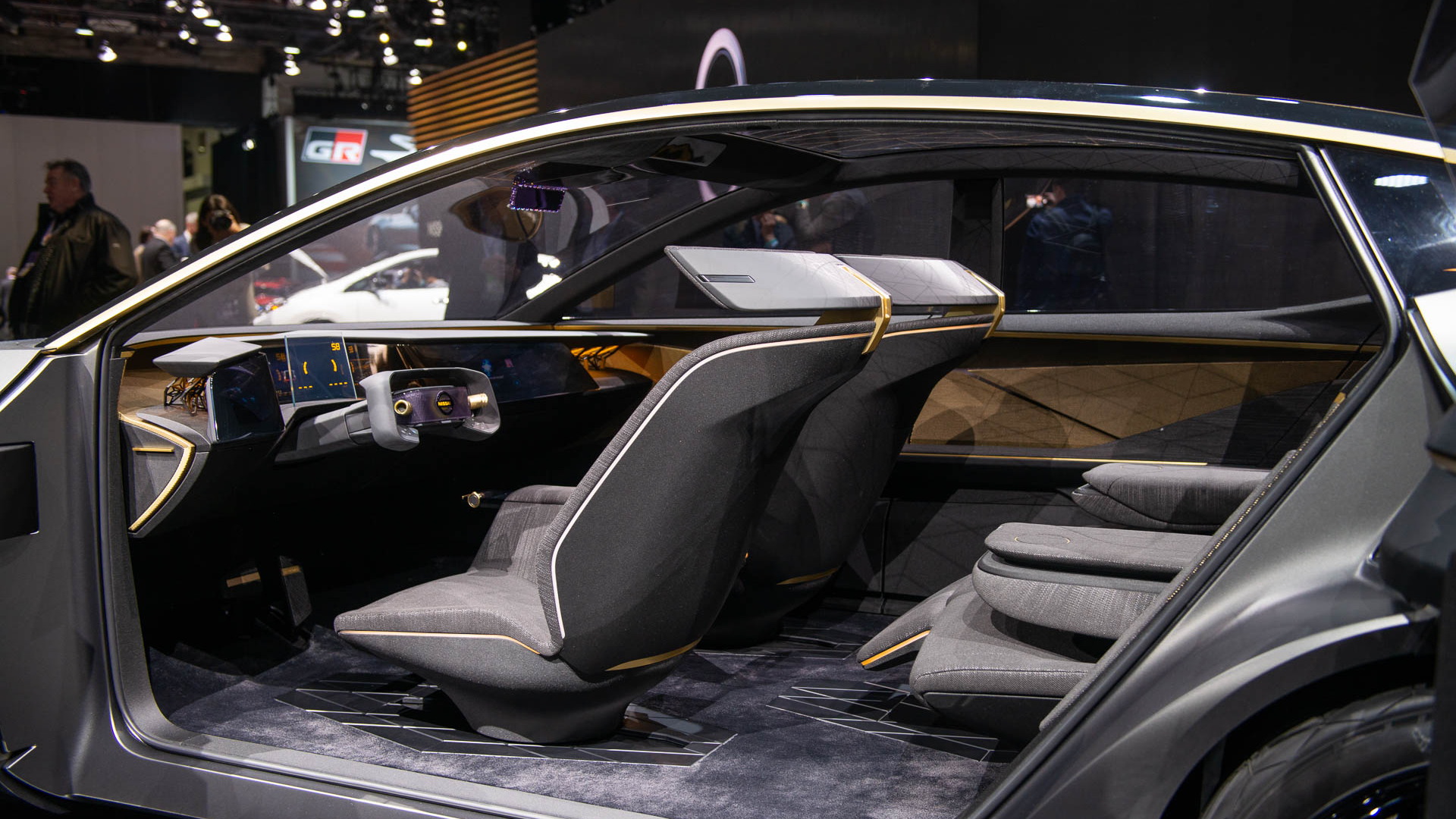 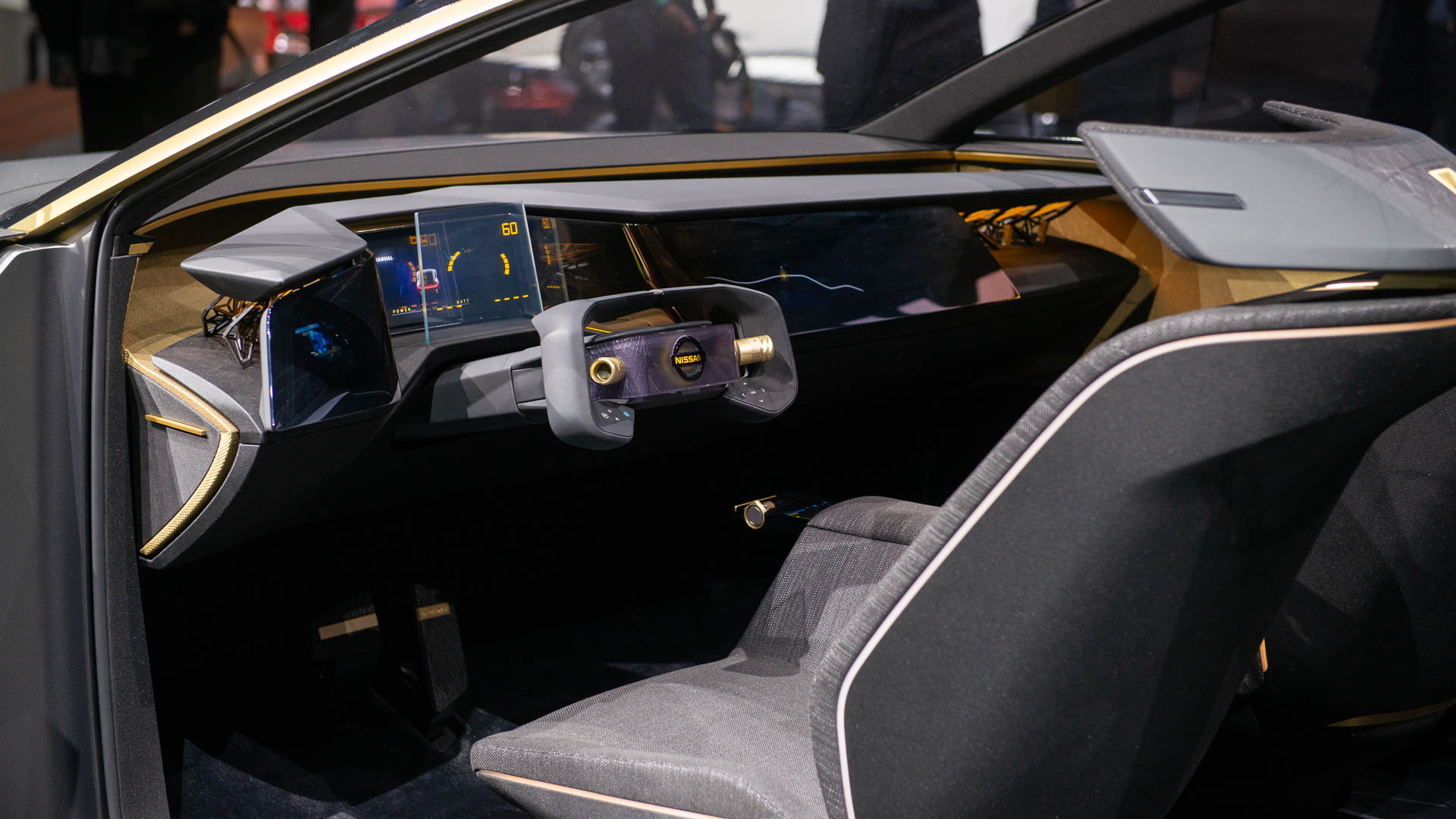 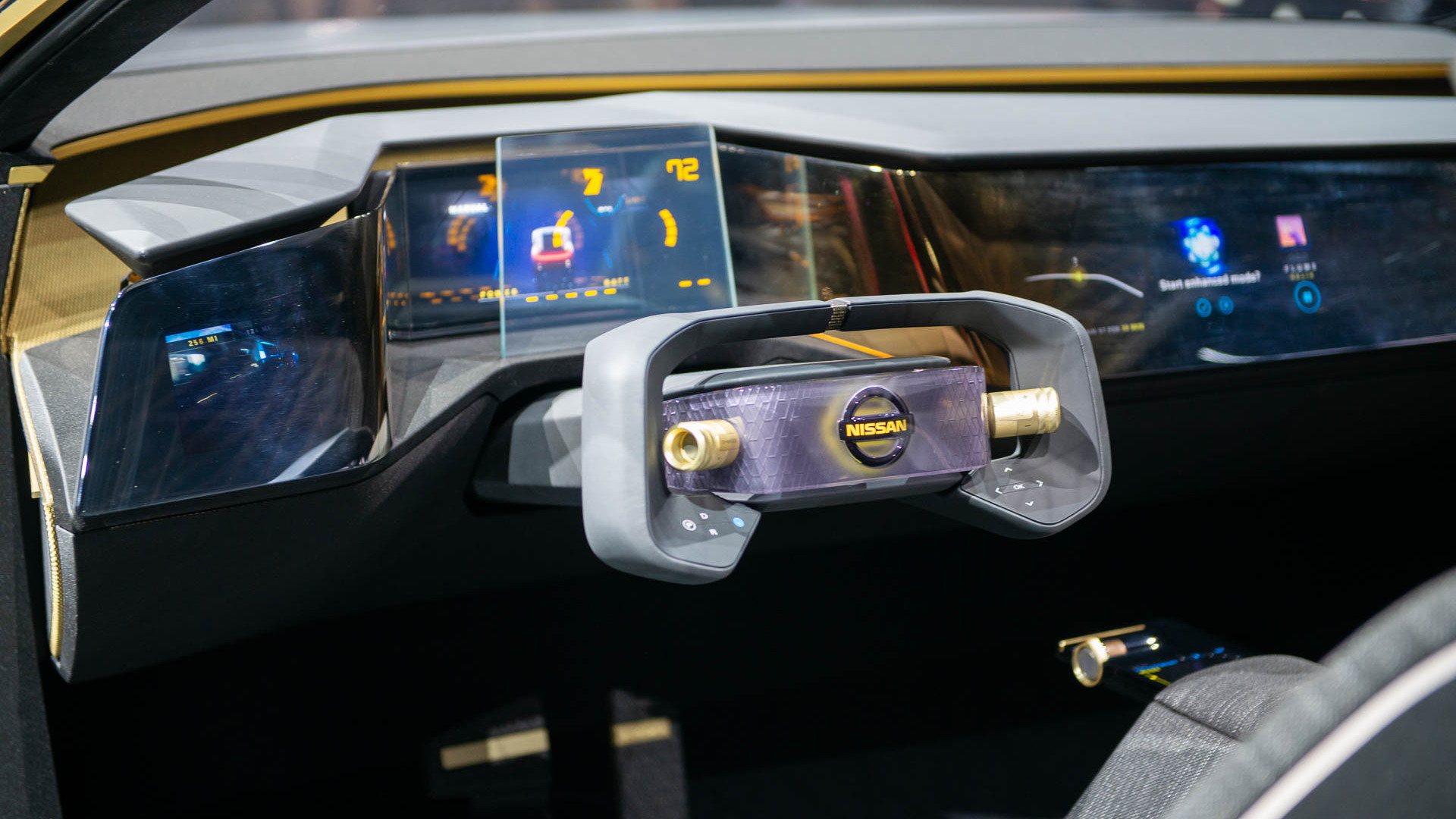 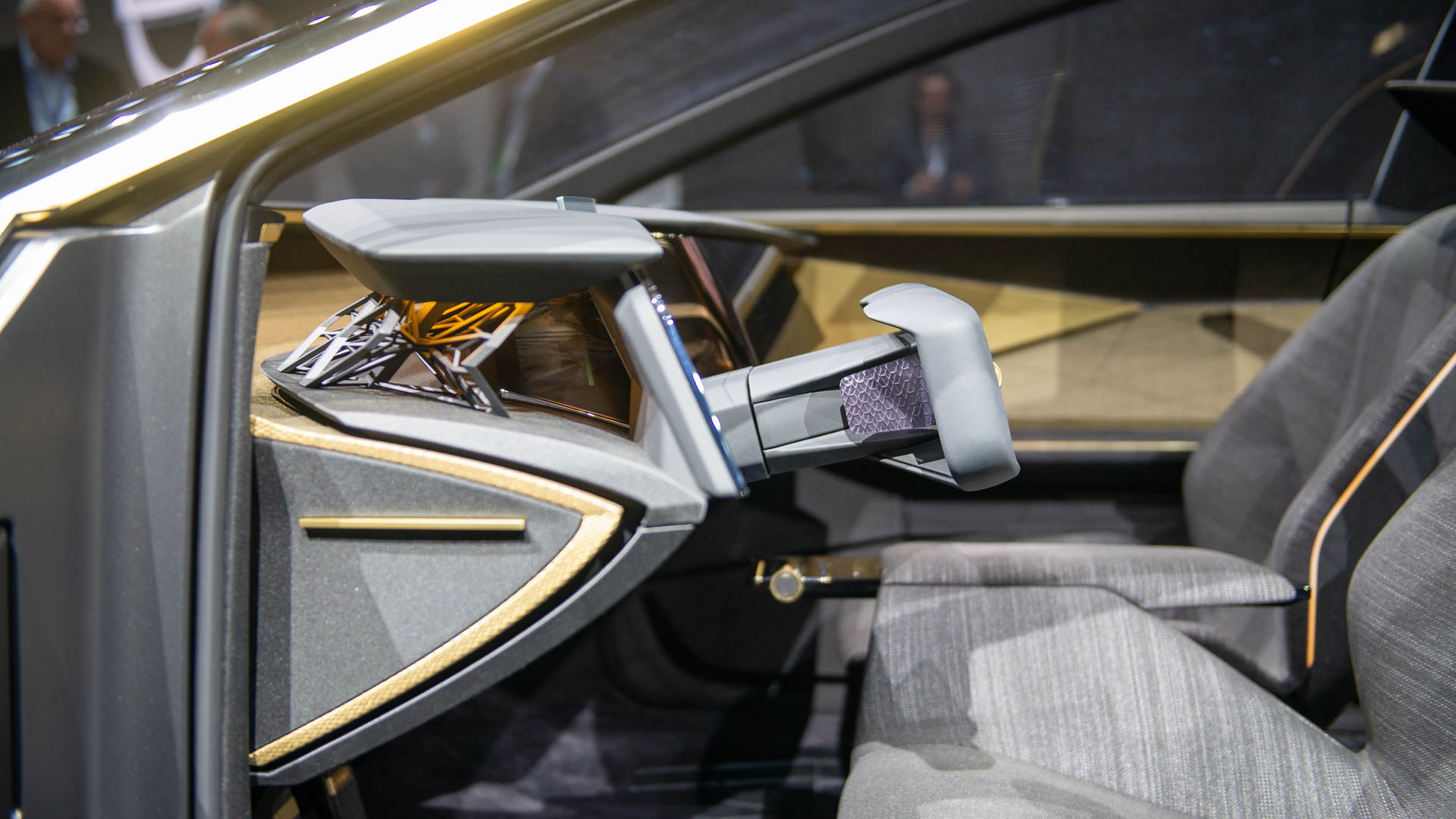 At the Detroit auto show, Nissan today revealed the IMs concept, a vision that sees the sedan as existing in a quite different, all-electric “elevated” form.

At face value, the IMs serves as a sedan counterpoint to the IMx concept first shown at the 2017 Tokyo show and advances some of the design and interface themes seen in that vehicle.

Nissan is aiming to make at least one of its established mainstream nameplates electric-only by 2025. It also hasn’t given up on sedans and, as global product strategy VP Ivan Espinosa told Green Car Reports this past week, it’s looking for innovative things to do with the sedan form factor.

Connect the dots, and the IMs is likely not a moonshot concept, but a foretaste of an electric Maxima—or the equivalent—built on the upcoming dedicated electric platform that will already spawn a production crossover based on the IMx.

“The IMs explores the limits of sedan design with an approach that elevates the category in both look and functionality,” said Alfonso Albaisa, Nissan’s senior vice president for design.

Sedan form factor, elevated to the next level

Nissan calls the IMs concept an “elevated sports sedan,” but it’s not necessarily a utility vehicle. It’s only a couple of inches taller than current sedans, but it has a seating point (and roofline) that’s more crossover-like due to the battery pack that’s packaged directly below the cabin in a “skateboard” position that’s different than what today’s Leaf employs.

The IMs “explores the limits of sedan design with an approach that elevates the category in both look and functionality,” summed Albaisa, in a release.

CHECK OUT: How Nissan hopes to market its future electric cars

The IMs rides on big 22-inch wheels, and it has an air suspension that will adapt to the road type as well as the driving mode.

The exterior is a marked departure from the sculpted sheetmetal and now-commonplace “floating roof” look of Nissan’s current sedans and crossovers. It aims for simpler surfaces and clean edges and is simultaneously shaped for aerodynamics. Nissan describes the exterior proportions as progressive, with deepened doors, thin pillars, and multi-layer “holographic-style” rear tail lamps.

Two features that are typical for concept cars and unlikely for production include side cameras replacing the side-view mirrors and the elimination of B pillars entirely (the rear doors are rear-hinged).

Allowing for a mixed-mode reality

The cabin, like many interiors of recent concepts, emphasizes a reality check for autonomous driving—allowing for the reality that while autonomous driving modes may be allowed in some conditions, in manual mode it delivers what Nissan calls “the exciting, high-performance driving experience that only an advanced electric vehicle can provide.”

To fit those dual purposes, there’s much to examine inside. The IMs has a driver’s command seat, conforming to Nissan’s Zero Gravity seat design, plus a unique Premier Seat at the middle in back, with an Ottoman. It’s flanked by two outboard seats that can be folded when not in use to help make that middle position feel more “indulgent,” as Nissan puts it.

The interior, Nissan says, “highlights modern Japanese design and craftsmanship,” and it follows a “premium lounge” design with what the designers call “timeless Japanese futurism.” The shape of the instrument panel and door trim (and, we would imagine, what replaces the traditional steering wheel) are inspired by “a spaceship to the moon,” while the two layers of screen controls and displays attempt to prioritize information. Nissan says that it’s fine-tuned the layout to follow the natural movements of the eye.

At quick glance, there’s an overabundance of screen real estate. A year or two ago we would have estimated the chances of production to be near zero, but in the age of Byton and its 48-inch production-bound screen it may be possible.

Nissan’s vision is built around an “interior sensing platform” that uses a combination of sensors and cameras to study the driver’s posture and facial expressions. Nissan’s “Invisible-to-Visible” technology, or I2V, which it showed last week at CES, allows an augmented reality in which the driver and passenger can see a mix of what’s out the windshield and what the sensors are seeing—helping to pre-emptively ease stress when the sensors and connected technology know better.

Despite all the naysayers—some entire automakers included—who claim sedans don’t have a future, the IMs concept shows that sedans can evolve into something exciting and different by just changing with the times.