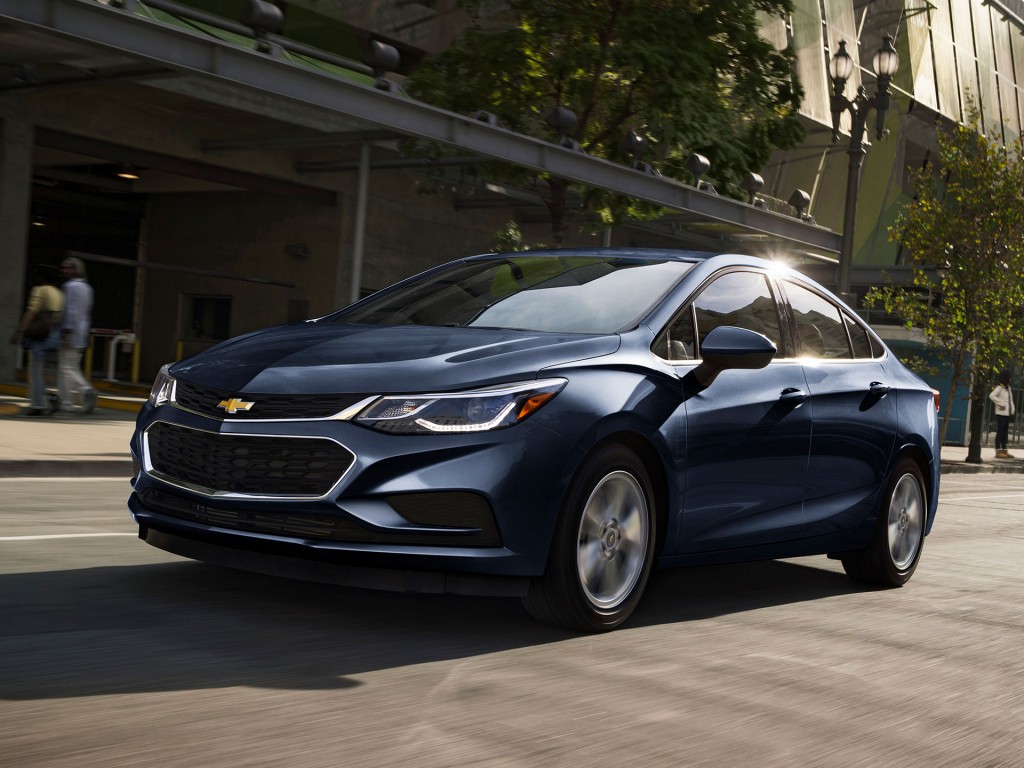 When the first Chevrolet Cruze Diesel was launched back in 2014, it made a lot of sense.

Diesel was in vogue. German manufacturers were pushing diesel power in a huge way, with Volkswagen's "Clean Diesel" leading the charge.

Oh, how things have changed.

Diesel for passenger cars today is, for lack of a better word, despised.

Governments in Europe, long a paradise of diesel power, are actively trying to ban the technology, while millions of Volkswagen owners are facing buybacks—the unlucky ones are facing questionable repairs and software updates.

The 2017 Cruze Diesel enters that world with promise. Capable of an EPA-rated 37 miles per gallon in combined highway and city driving, the new Cruze is one of the most efficient non-electrified vehicles on the market. 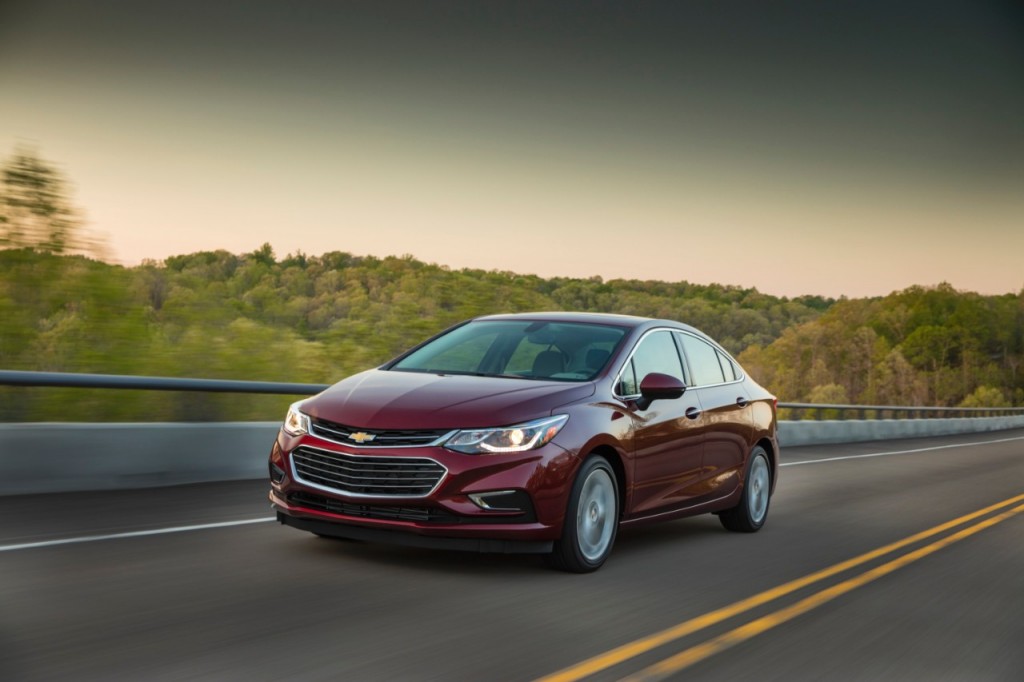 The question, then, isn't over the second-generation Cruze Diesel's appeal, but more its fuel efficiency can overshadow diesel's increasingly dirty reputation.

And the most immediate way of addressing that question is looking at the real-world fuel economy. A Cruze Diesel with the 6-speed manual transmission will return an EPA-estimated 52 mpg on the highway and 30 mpg in the city.

Regrettably, I didn't drive that car. Instead, I tested the new 9-speed automatic, which loses 5 mpg on the freeway, but nets 31 mpg in the city and ties the manual model's combined rating of 37 mpg.

I drove 190 miles during my week behind the wheel, 80 percent of it was doing what most Cruze Diesel owners do: commuting up and down the freeway.

The rest of that time, I puttered around metro Detroit at urban speeds, encountering frequent red lights and stop signs.

Temperatures were cool, but comfortable enough that it didn't impact fuel economy. And the result? 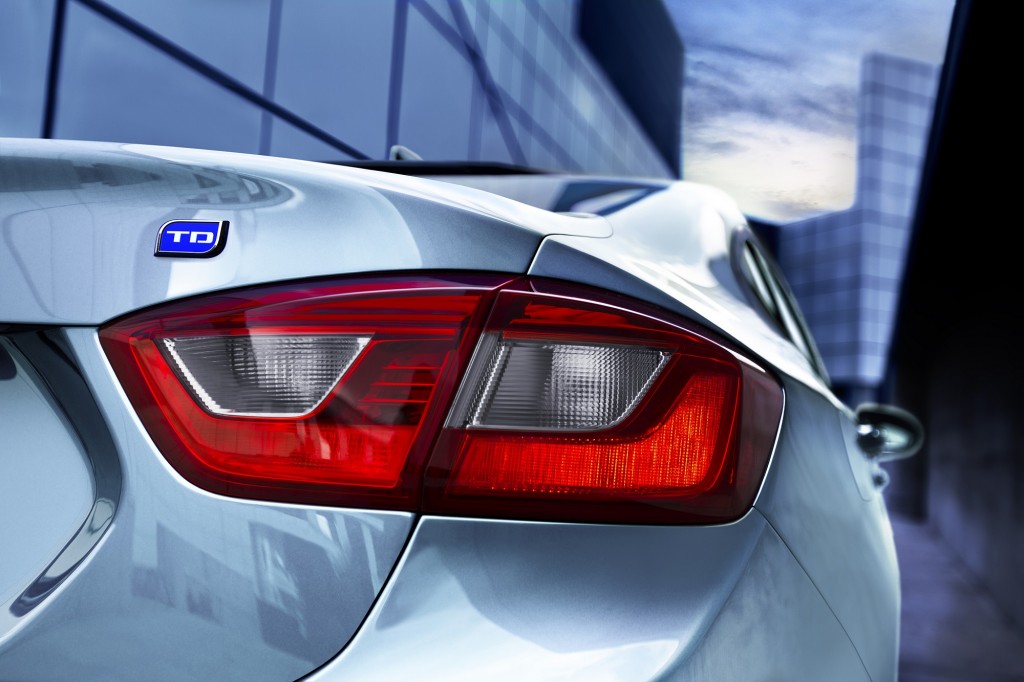 I calculated 45.1 mpg after refilling the tank on my final day with the car, just 2 mpg below the EPA-estimated highway rating.

Based on those figures and my mixed driving cycle, a Cruze Diesel should have no issues hitting its EPA-estimated fuel economy numbers on a straight freeway run.

In fact, I'm betting that Chevy Assistant Chief Engineer Mike Siegrist was right in February, when he told the media at a backgrounder for the Cruze Diesel that it will likely exceed its EPA figures on the interstate.

But what's likely to register for high-mileage drivers is how easy scoring such impressive fuel economy was.

In early February, I drove the new Toyota Prius. While the temperatures were far cooler and likely affected the fuel economy, I struggled to return 44 mpg on a broadly similar mix of highway and city roads.

Driving the Prius for mileage was an annoying affair, requiring me to putter away from stoplights and hang out in the slow lane on the freeway as other cars passed, just so I could come up short on the EPA-estimated freeway figure. It was tiring and tedious.

Driving the Cruze Diesel, on the other hand, was not.

The combination of 240 pound-feet of torque and an excellent 9-speed automatic makes the Cruze Diesel both usably quick and easily efficient on the freeway.

Dip just a toe into the throttle and the 1.6-liter engine obediently serves up enough torque to keep up with traffic.

Dig further, and making a pass with the Cruze Diesel is even easier than in a gas-powered Cruze. Surprisingly, it's quieter, too. 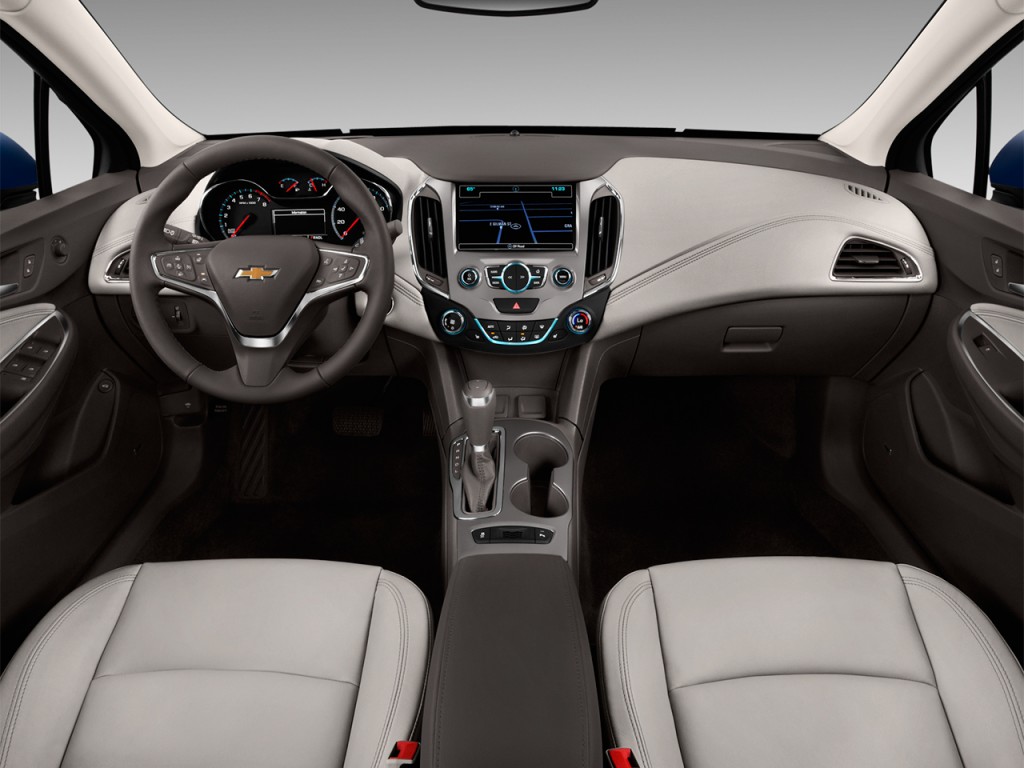 During Chevy's diesel background briefing, the company called the 1.6-liter the “flüsterdiesel,” a nickname bestowed on it by the German automotive media after they drove it in Opel models.

The word flüster is German for whisper, which is an appropriate moniker for such a quiet engine.

While there's some clatter on startup—I'm eager to see if that was a product of the cooler temperatures I tested in—the flüsterdiesel deserves every ounce of praise.

The engine is inaudible under gentle acceleration at freeway speeds, and would be the same around town if it weren't for the lack of road and wind noise.

Push the pedal harder, and there's a negligible increase in volume that I could drown out by turning up the heater's fan speed a notch. The 1.6-liter is that quiet.

Only under really heavy throttle does the 1.6-liter make its presence known, and even then, it's quieter than the gasoline-powered Cruze's 1.4-liter turbo 4-cylinder. 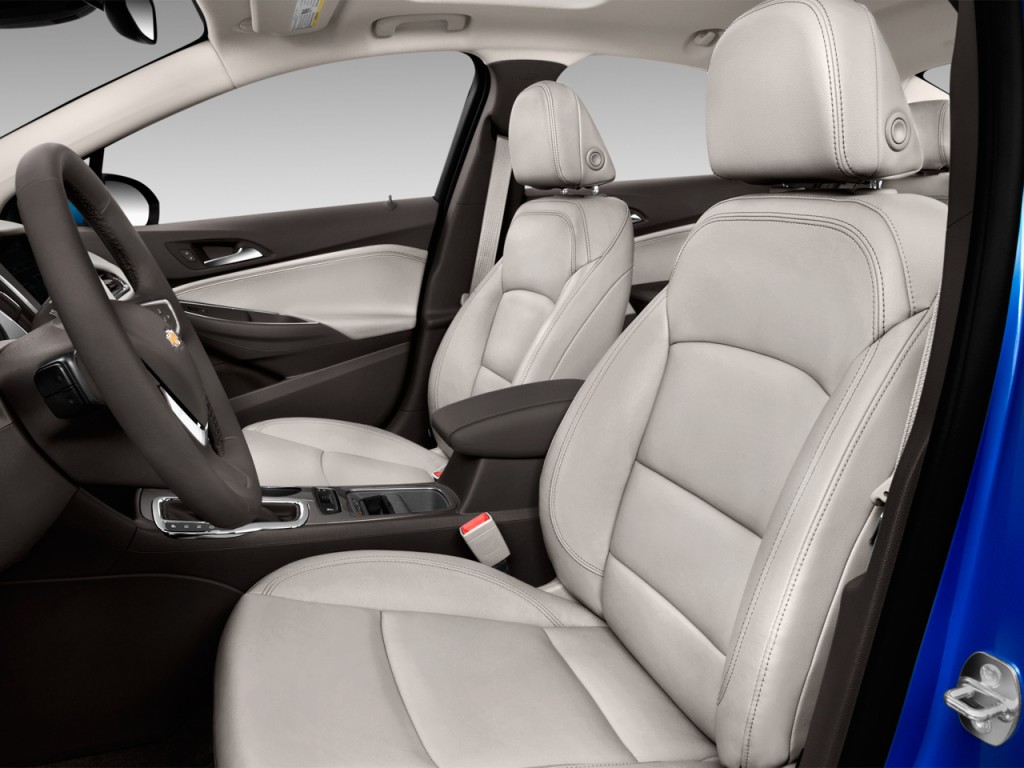 While the diesel engine deserves a lot of praise, the reality is that I'd be ignoring the sublime 9-speed automatic. GM has just nailed this transmission.

It engages quickly and smoothly off the line, and then executes upshifts so seamlessly I wish GM offered a gear indicator in the dash, because I rarely sensed what the transmission was doing.

It's similarly unobtrusive when downshifting, where the 9-speed served up lower gears almost immediately. (I think.)

I'm certain there were downshifts happening, because it's the only explanation for the tach needle being in the right place all the time, but it was virtually impossible to tell for sure.

The transmission is a huge part of what makes the engine's behavior under gentle throttle at freeway speeds so impressive.

It's only when I floored the diesel engine from a standstill that the 9-speed's plethora of gears became apparent.

Under wide-open throttle, the transmission upshifts constantly, but each change is fast and smooth. This is a stellar transmission, one I can't wait to see in more Chevy products.

Chevy did miss one opportunity with the Cruze Diesel, though.

I think hybrid and electric-car manufacturers have done a great job of what I call "gamifying" efficient driving. The idea is to turn smart driving into a game that increases an owner's involvement and reinforces efficient driving habits.

The Ford Fusion Hybrid does this brilliantly, giving owners a braking score every time they come to a stop, and adding a tiny virtual tree in the instrument cluster. Go easy on both pedals, coast when possible, and as your efficiency improves, the tree starts to grow.

It's involving in a way that the Cruze's simple bar graph isn't. There's no brake score here, no reinforcement for smart driving—just a boring graph that tasks owners with trying to their best average over a set distance. 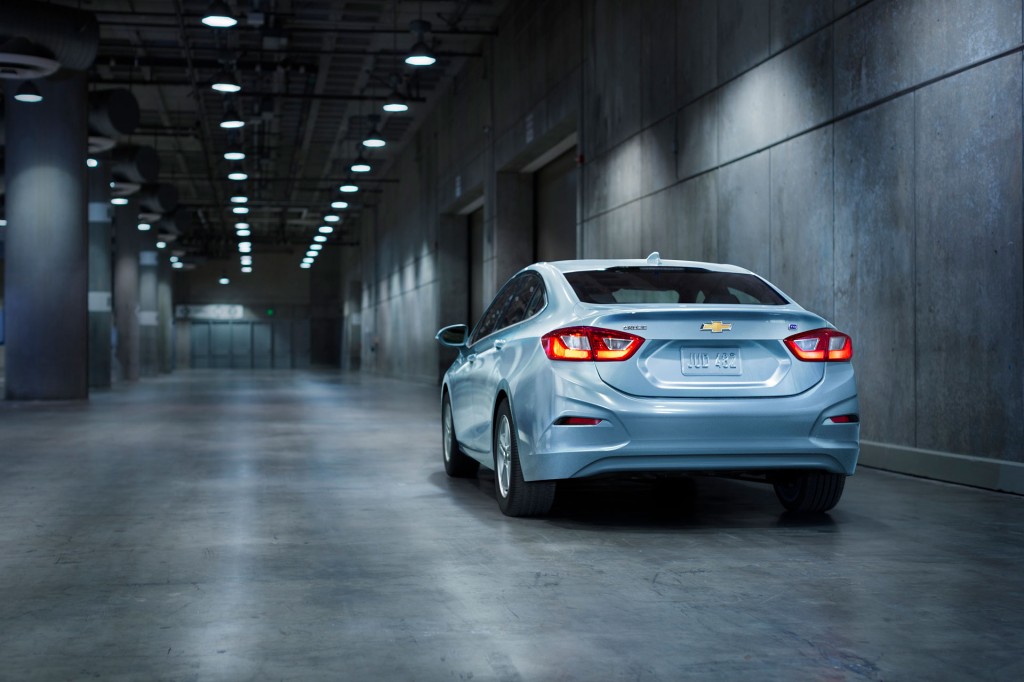 Based on the Cruze LT trim level, the Diesel—that's the actual name of the model and trim level with the turbodiesel engine—gets a few unique bits from the Premier trim.

The big one is the available leather upholstery, which the LT doesn't offer. Beyond that, the Diesel outclasses the gas-powered LT with standard heated front seats, push-button start, and a power driver's seat,

Beyond that, equipment on the two cars is broadly similar, down to the available safety equipment. With the Cruze Diesel, Chevy continues its trend of limiting cutting-edge safety equipment (like adaptive cruise control) to its range-topping models.

While General Motors regularly puts its powertrain engineering expertise on full display with its array of high-performance cars and ultra-capable pickups, the company's small cars have never felt like they received the same kind of attention.

The Cruze Diesel does.

It's a genuinely impressive piece of engineering. From its startlingly quiet diesel engine to its supremely competent nine-speed automatic transmission, the Cruze Diesel is a smart, efficient compact sedan.

Whether it survives and thrives in a world that's actively hostile to diesel power remains to be seen.