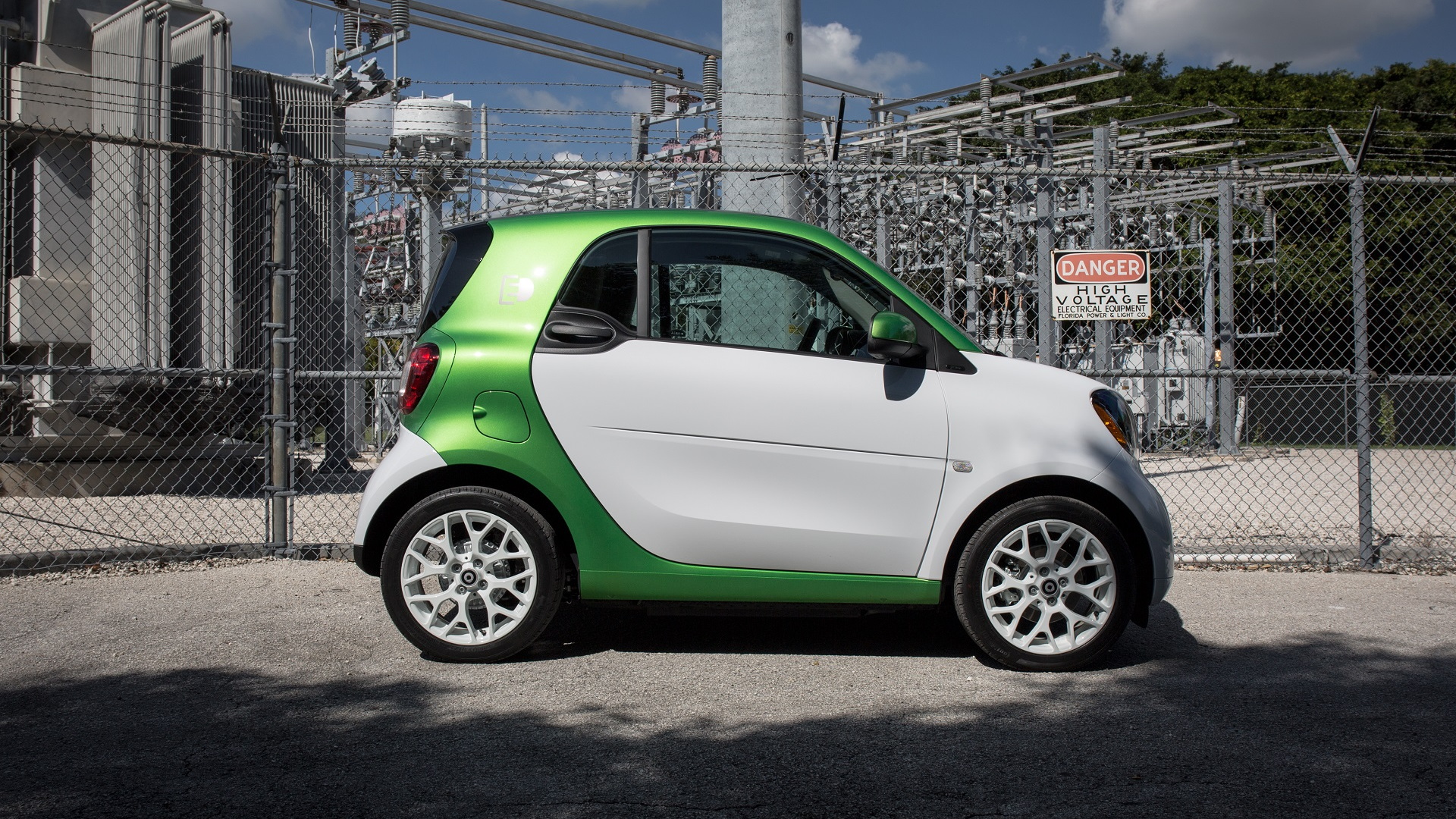 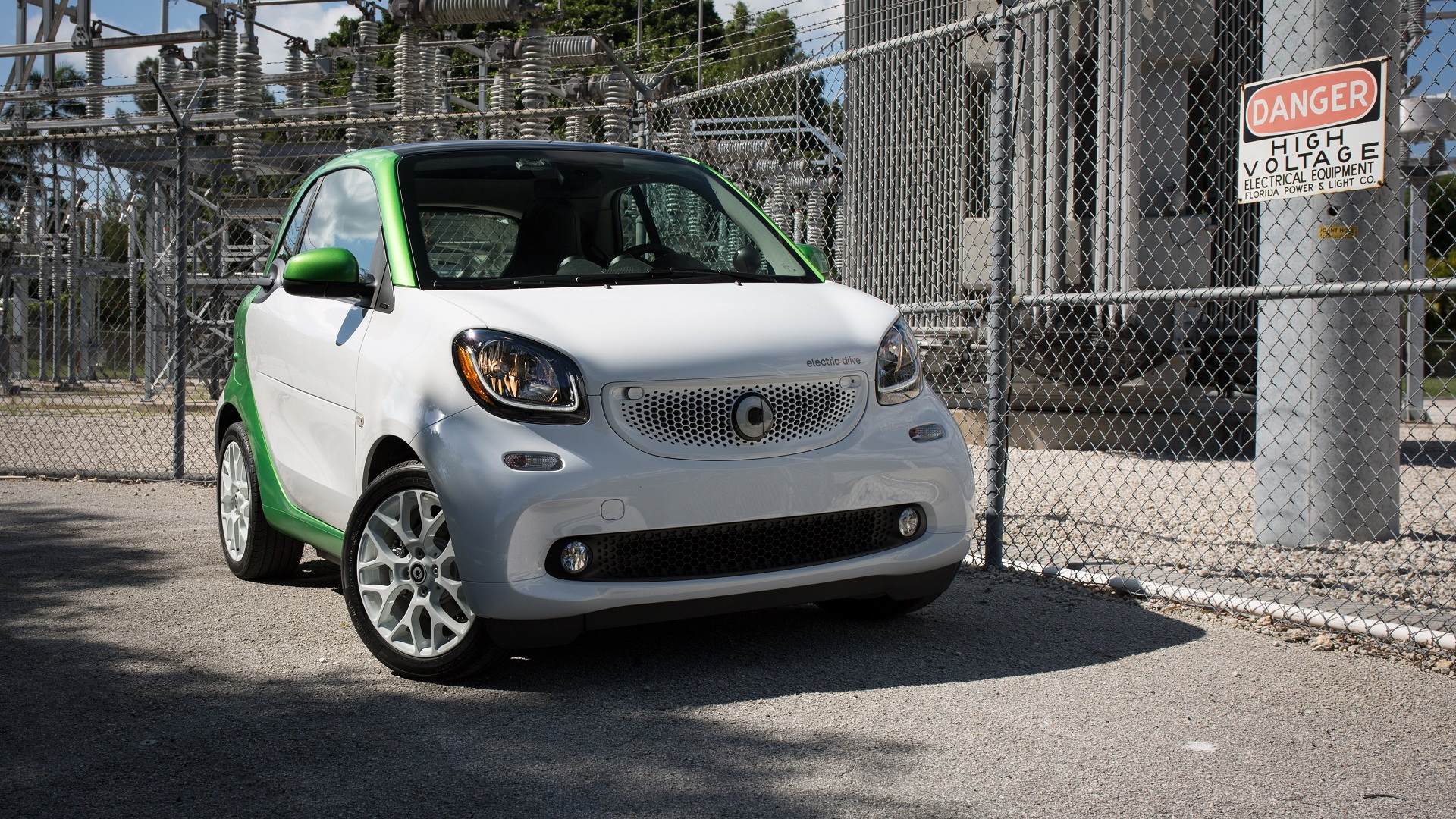 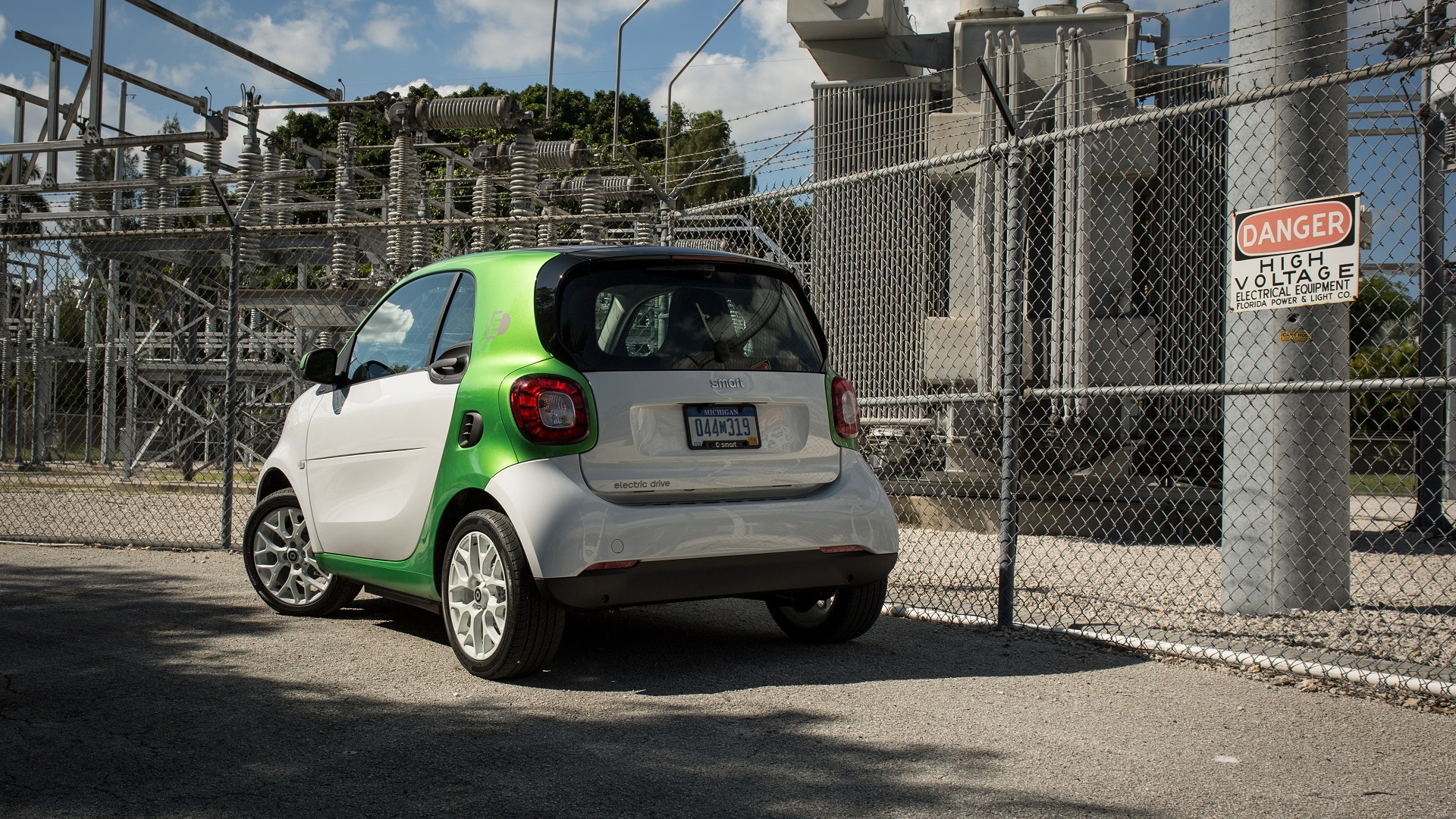 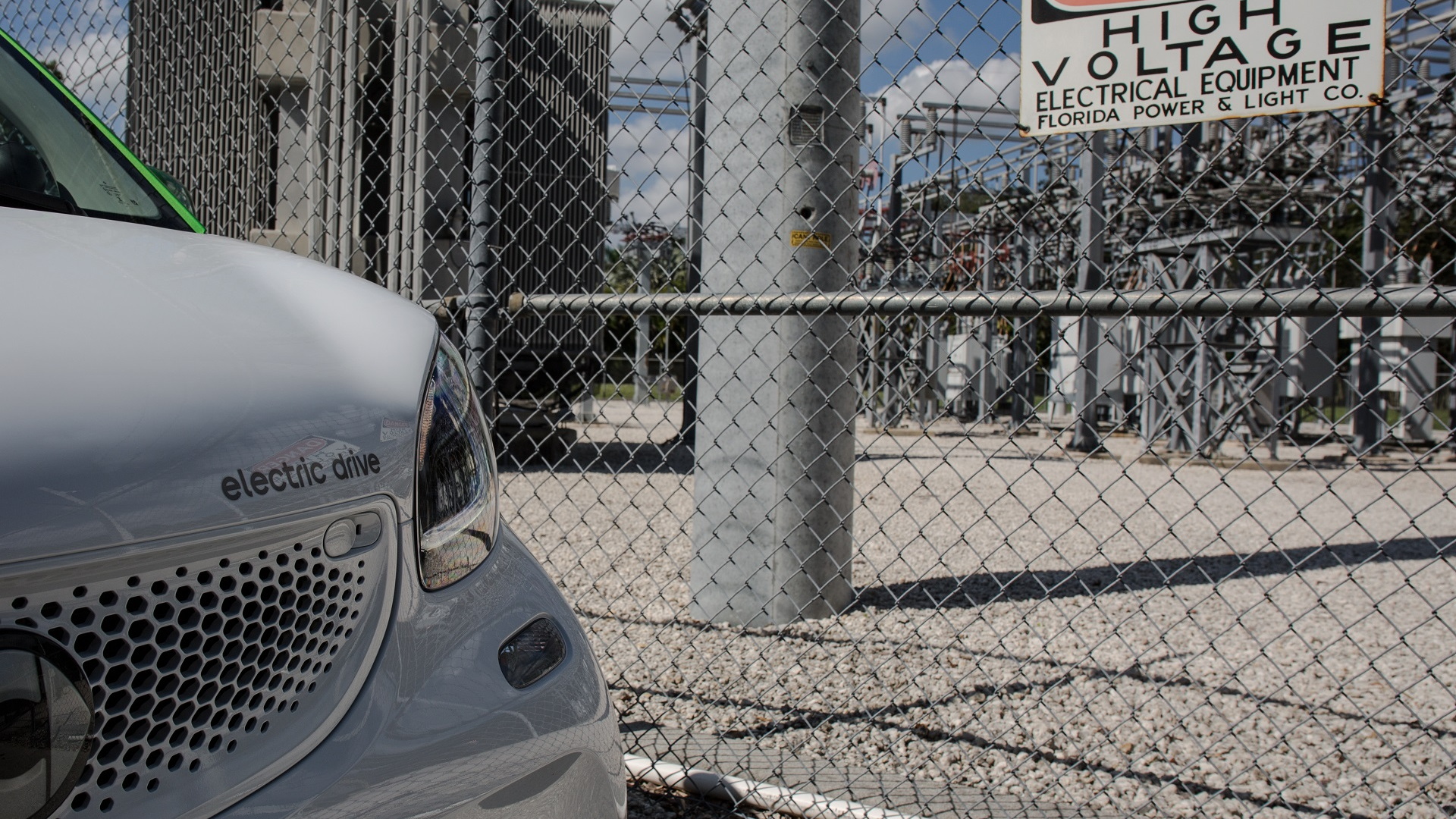 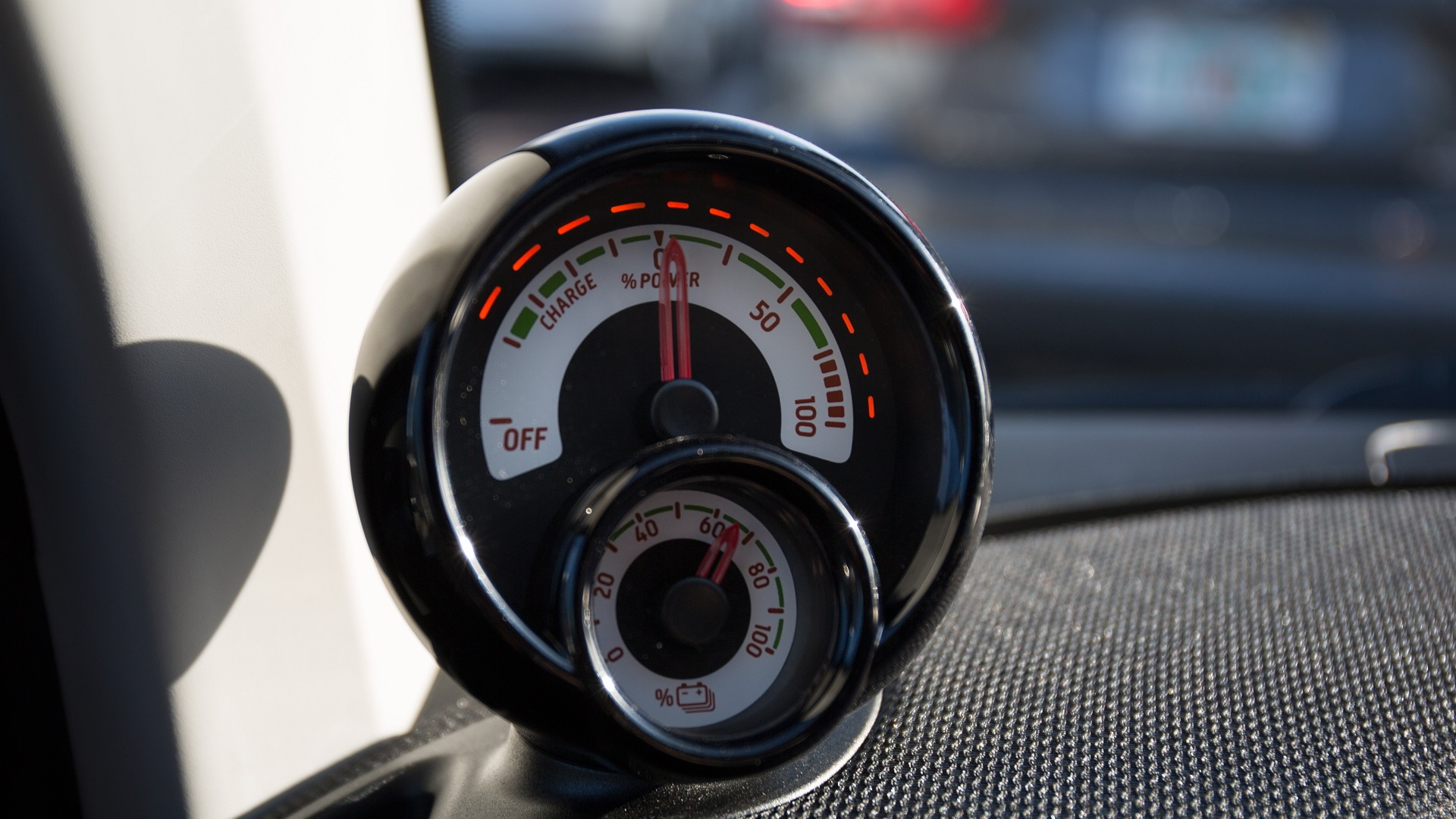 On a hot, muggy day in south Florida, nothing is more comforting than knowing that your well-cooled car will make it to its destination.

When that car is a reboot of the Smart Fortwo Electric Drive, the tiny battery-powered European city slicker—and you’re surrounded by a sea of drivers who couldn't care less about keeping to a speed limit or staying in their lanes—you want to hope that you can make it.

The forthcoming new-generation Electric Drive coupe and convertible proves that there is again room for an electric version in the revamped lineup of Fortwo city-sized vehicles.

The shortest electric car on sale in the U.S. remains zippy, compact, and an urban warrior—but for many drivers, still unable to perform the duties of a primary car.

It offers quicker charging, slightly more range than the outgoing model, and a better overall package.

We joined Smart for a drive of the finished product in and around Miami, where cheap fuel, careless driving, and enormous SUVs form an unholy alliance.

Situated in the rear of the electric Smart, where the engine would reside, is a 60-kilowatt (81-horsepower) electric motor producing 118 lb-ft of torque. A single-speed transmission sends its power to the rear wheels.

A 17.6-kilowatt-hour lithium-ion battery pack sits under the passenger compartment, keeping the tall car’s center of gravity as low as possible.

Smart estimates a range of 70 to 80 miles per full charge, roughly the same as the model it replaces—EPA-rated at 68 miles combined—and perhaps slightly better, as well as more energy-efficient.

With electric hardware replacing the combustion engine and drivetrain, the Electric Drive only weighs slightly more than a gas-powered Fortwo.

But it’s safe to say that the introduction of the second-generation Fortwo Electric Drive does not signal a battery-powered revolution for Smart.

These numbers are consistent with what we learned during a ride earlier this year in a prototype of the new Fortwo Electric Drive.

The greatest improvement to the revamped electric two-seater is its charging time.

Using a 240-volt Level 2 station, the 2017 Fortwo Electric Drive is estimated to go from empty to full in approximately 3 hours—twice as fast as the current model. At a conventional 120-volt household outlet, a full recharge is expected to take more 13 hours.

Since all of the vehicles at the event were fully charged at the start, we’ll wait until we have an opportunity to drain the battery and recharge to confirm the charging times.

Another plus: the electric range monitor fluctuates based on total system use, as does that of a laptop, giving a more accurate readout than in some other electric cars.

If you’ve ever turned on an electric car's air conditioning, you’ve watched the range instantly drop by some percentage, never to recover.

In the Fortwo Electric Drive, clever climate-control settings sync with the range meter and reevaluate the range once the desired temperature has been reached. Given the small size of the cabin, that doesn't take too long.

On the road, the best part of driving the Fortwo Electric Drive is how little the experience changes from the gas-powered version.

Acceleration is brisk, though far from Tesla-quick, more in line with that of the Nissan Leaf. You can goose the throttle, time after time, and not tire of its playful attitude.

Steering feel is indistinct, but quick. Ride quality could be better, but it’s worth noting that this is an economy car for the city, not a Mercedes-Benz S-Class luxury sedan.

Cruising just above the speed limit on the clogged I-95 highway, the Fortwo Electric Drive never struggled to keep up, meaning it caught the eyes of some baffled drivers of pickup trucks and semis.

Best of all, the tiny 22.8-foot turning circle is so small, you can rotate a Fortwo Electric Drive on its own axis, which shortens U-turns dramatically (just like any other Smart).

Just as everyone on the road is aware that there’s something different about your tiny car, inside the Smart Electric Drive, you’re always reminded that it's a hatchback meant for conquering tight parking places, not wide open spaces.

The airy interior is still tight for two people, though several inches wider than in the last generation, and storage space is minimal.

Like other Smart models, the cabin is spare but nicely finished, with textured cloth and glossy plastic covering nearly every surface.

A clever infotainment system displaying range and “eco score,” in addition to a Tom Tom-based navigation system, is a standard feature of the electric Smart.

The few changes to the interior of the Fortwo Electric Drive include a battery charge meter occupying the gas-powered model's dash-top tachometer pod.

But no matter how proficient the Fortwo Electric Drive is, there are multiple, electric-powered elephants in the room—especially the 2017 Chevrolet Bolt EV hatchback, with its rated range of 238 miles, at a starting price of $37,500.

Does the Bolt EV compete with the Fortwo Electric Drive? To Smart, the answer is easy: its electric Fortwo isn't meant to be a primary car for most people.

The Bolt EV could well supplant a gas-powered car as a first or only car, but Smart wants us to think of the Fortwo Electric Drive as supplemental transportation (unless you happen to live in a city where the parking situation is dire but electric charging stations are abundant and free).

The costs of purchase and ownership may determine the reborn Smart Electric Drive's fate in the U.S.

Pricing won't be released until closer to the Spring 2017 on-sale date, but Smart hints that the new version will come in where the old one did ($25,000)—or possibly lower.

Given the rapidly changing pace of technology and range, leasing is often preferred to purchase among electric-car shoppers.

Last we checked, the current Fortwo Electric Drive could be leased for $139 per month, which would make the new, range-expanded model a great value.

Given sustained low gasoline prices, will the new Fortwo Electric Drive be more of a hit than its predecessor? We’ll know once this model hits showrooms in the second quarter of 2017.

But you can expect them to line city avenues and boulevards, not the country's high-speed Interstate highways.

Smart provided airfare, lodging, and meals to High Gear Media to bring you this first-hand report.