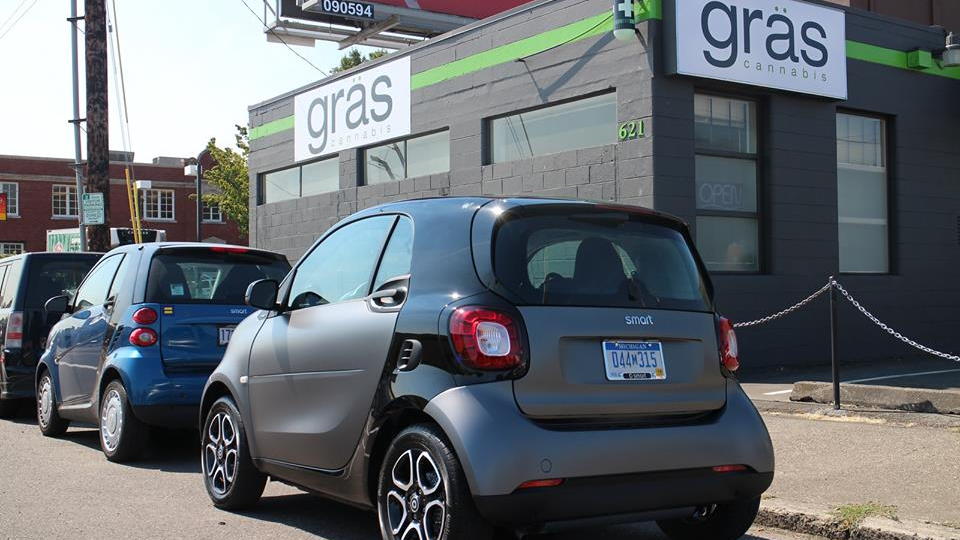 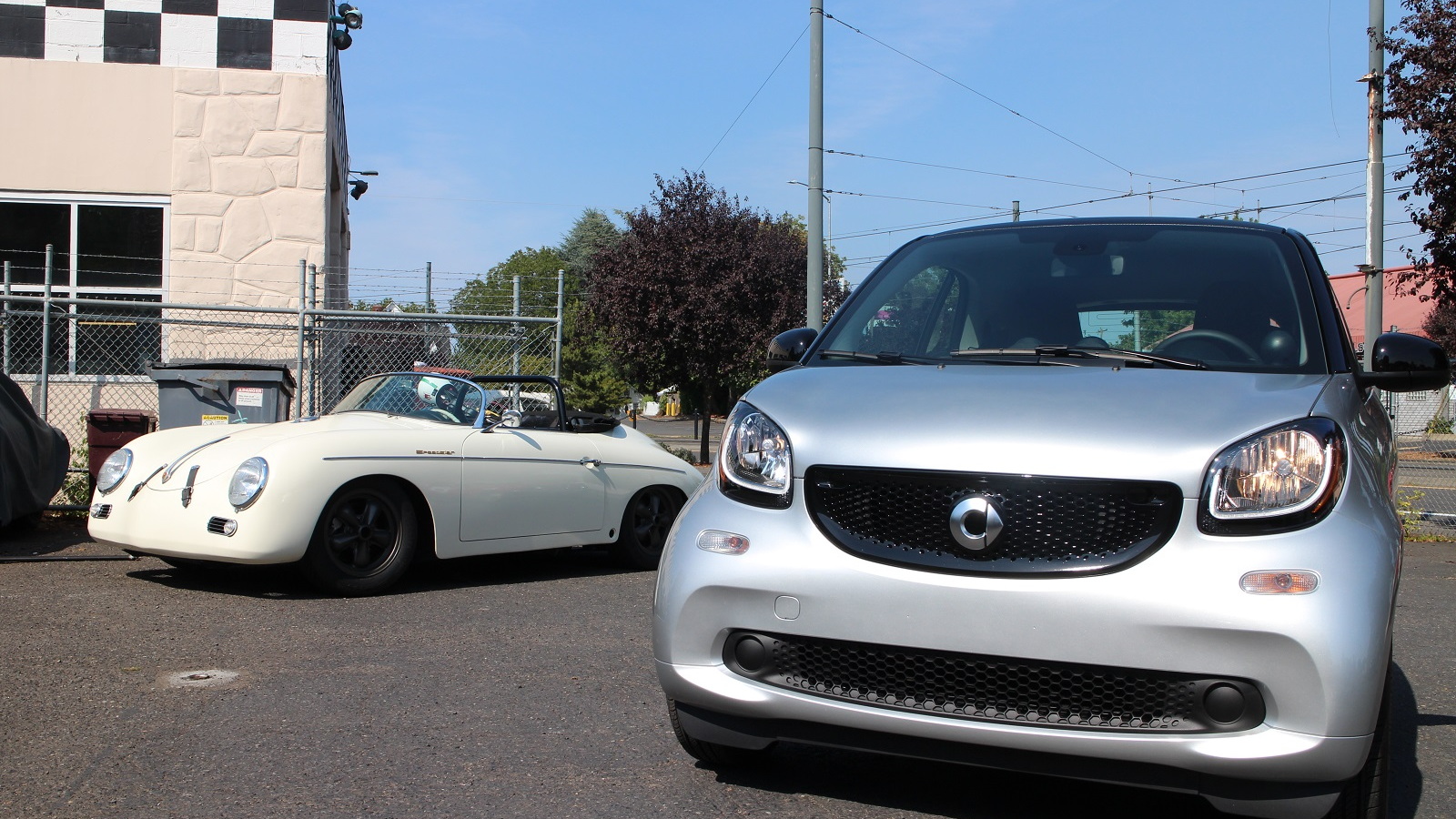 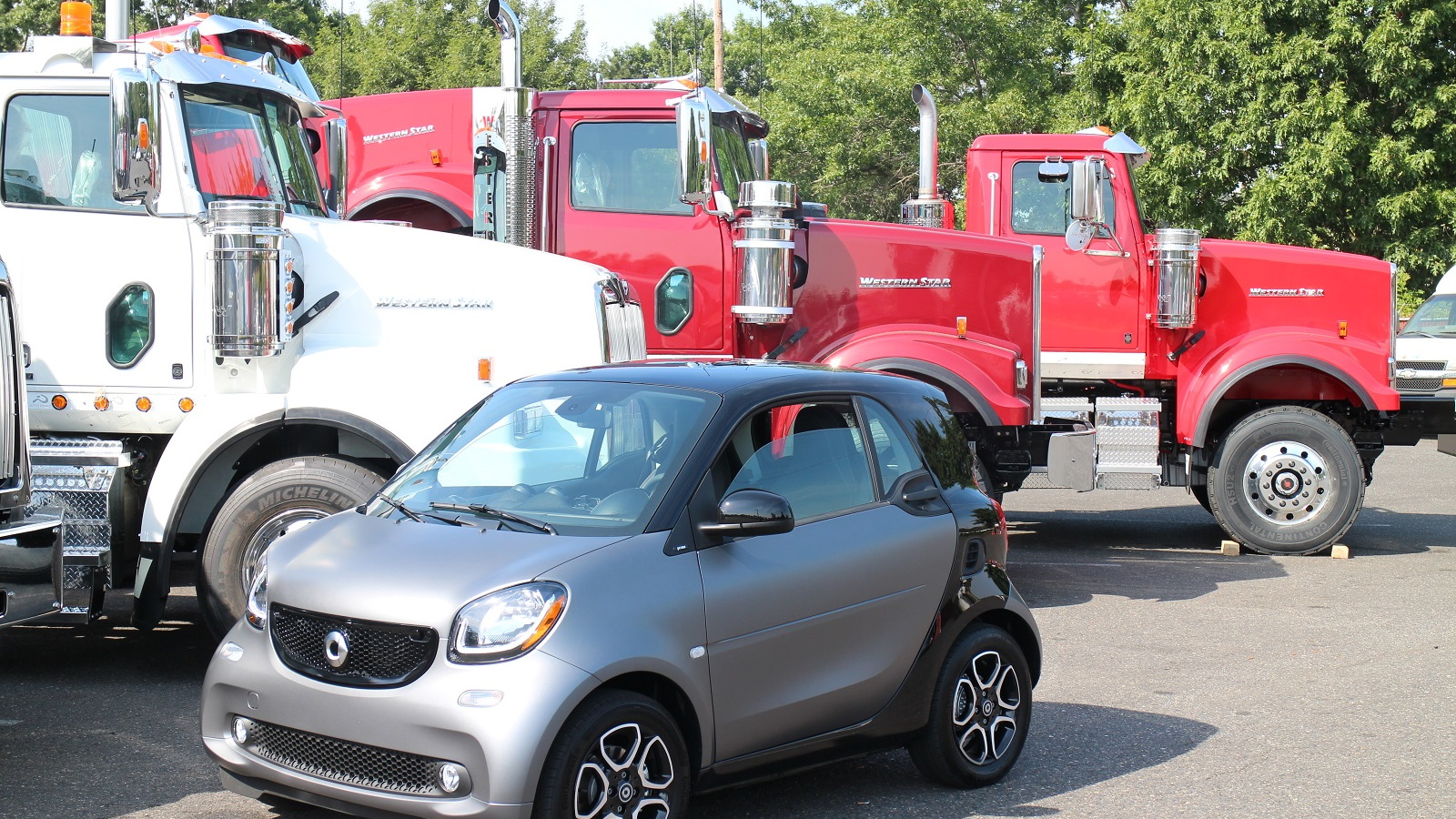 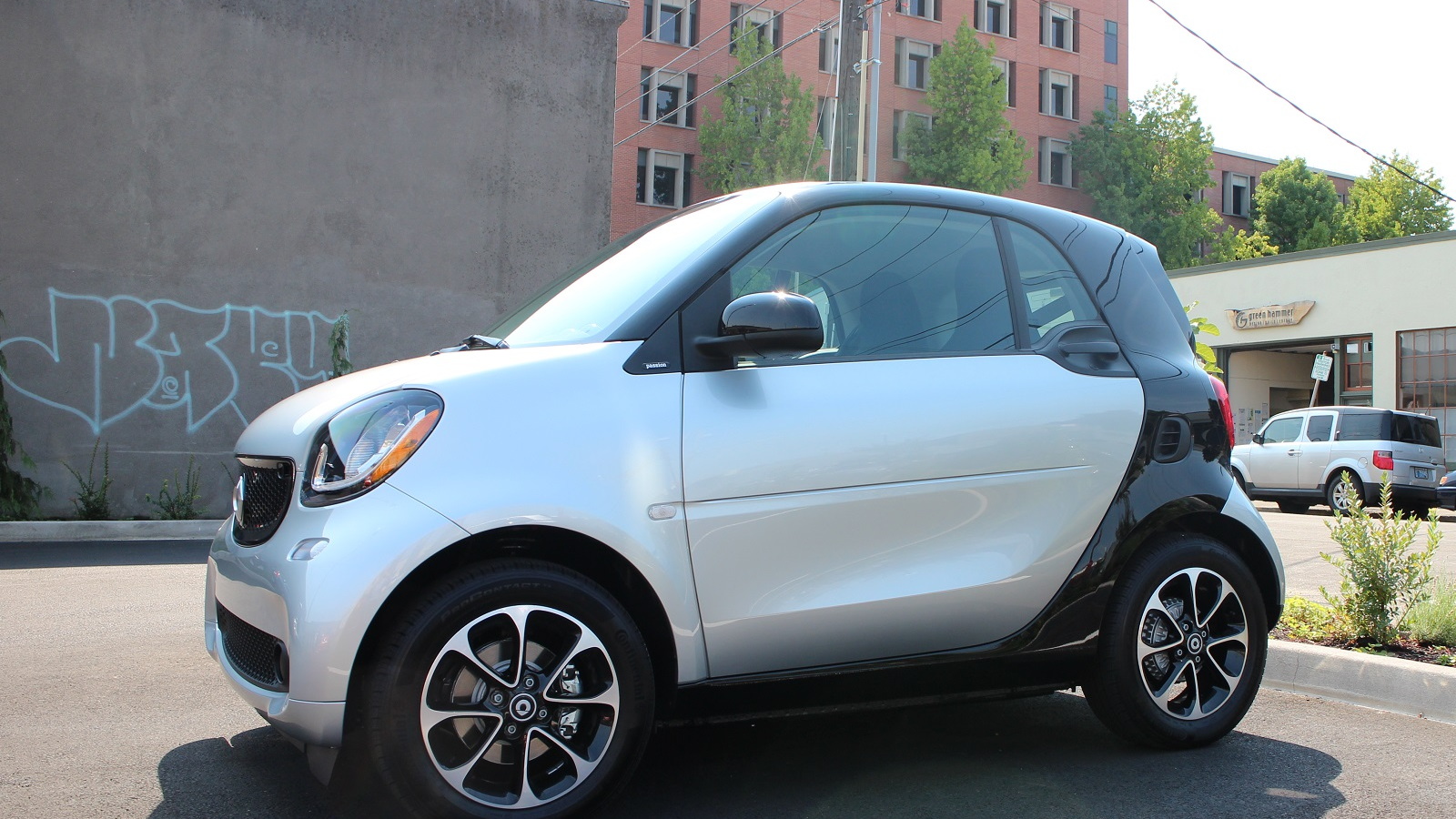 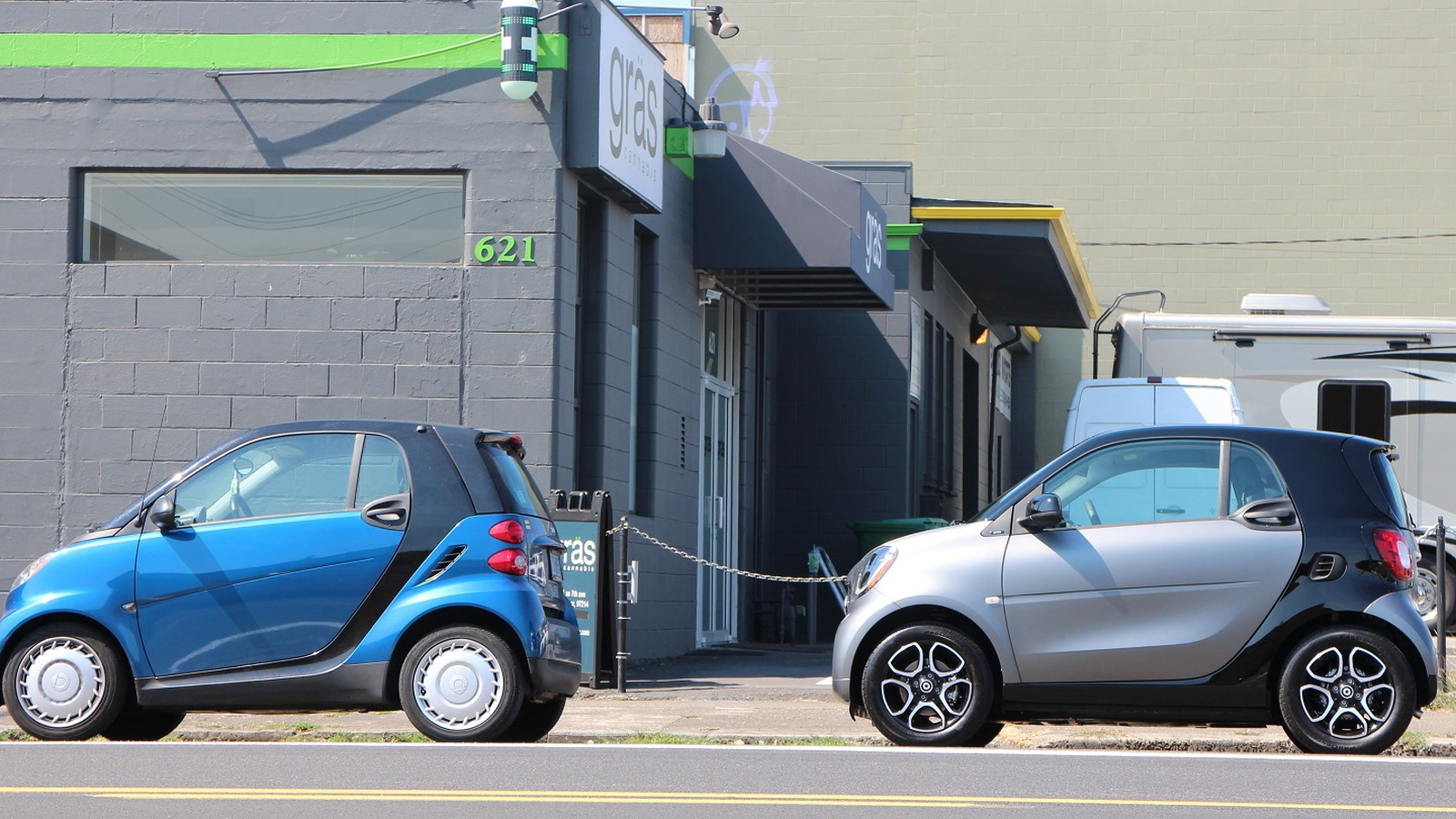 The 2016 Smart ForTwo is the first entirely new version of the European two-seat minicar since that vehicle was launched in the late 1990s.

And it's a much better car, with more power, a choice of manual or automated transmissions, modern comfort and interior features, and fuel economy that's stayed at the same level even given its added equipment and higher power.

That said, the main reason to buy a Smart ForTwo isn't to save gasoline. It's to park in impossibly tiny spaces.

We spent parts of two days driving a couple of different 2016 Smart coupes around Portland, which is one of more than 20 cities the company has identified as "Smart Cities" where the particular charms of the ForTwo may find a market.

The entirely updated Smart retains the same 8.8-foot length of the original. But not only is it 4 inches wider, its turning circle has decreased to an almost comical 22.8 feet--meaning you can make U-turns pretty much anywhere, or do doughnuts in even two-lane roads.

That makes the new Smart an ideal urban warrior, but it's also far more usable at highway speeds than its predecessor.

The wider track gives it a more stable feeling, as does an incrementally longer wheelbase.

And the added power--89 horsepower and 100 lb-ft of torque, against its predecessor's 70 hp and 68 lb-ft--means that even at 70 mph, there's some reserve for acceleration.

Still, most Smarts won't spend most of their time at freeway speeds. They'll be nipping in and out of city and suburban streets, and at that the car excels.

The 0.9-liter three-cylinder engine is still mounted on its side between the two driven rear wheels, but it now has a turbocharger to provide that 89 horsepower--meaning the Smart is no longer the least powerful car sold in the U.S.

Best of all, the 2016 Smart has finally dispensed with the much-loathed automated manual gearbox, whose abrupt shifts and generally jerky action made it exceptionally hard to drive the old Smart smoothly without experience.

The latest model has two transmission offerings. The base ForTwo Pure model comes with a conventional five-speed manual gearbox, and a six-speed automated dual-clutch transmission is a $995 option (and standard on some higher trim levels).

Smart expects four out of five ForTwos sold in the States to be ordered with the DCT, which we found to be the better choice.

We'd looked forward to the manual Smart, hoping it would be as tight and fun to drive as the Ford Fiesta EcoBoost fitted with a turbocharged 1.0-liter three-cylinder engine (which comes only with a six-speed manual).

But it wasn't. The five-speed had a somewhat rubbery action, and surprisingly long throws for such a small car. Its roots in low-end Renault economy cars showed through just a little too much.

Worse, a lot of clutch slipping is required on startup from a stop, as drivers must rev the engine to get it up into boost range when it delivers power to move the Smart smartly away from the light.

The DCT, on the other hand, has been electronically matched to the engine control software, and it was much easier to get going and get instant power when it downshifted.

The engine was still punchiest from 4000 rpm to its apparently redline around 6500 rpm, and we have to wonder what that will do to real-world fuel economy.

That 36-mpg combined rating is the same as the outgoing first-generation 2014 Smart.

But the Smart is really for people in places like New York and San Francisco who need to park in very, very small street spaces.

The company even includes a crowd-sourced "Smart Spaces" in its phone app, letting owners take a photo of a tiny space that only a Smart can park in.

After validation, the company will add the space to its database, and any driver can seek out the space. San Francisco has hundreds of them already.

Meanwhile, if you want fuel economy, a raft of cars--not only the 40-mpg Mitsubishi Mirage but every model of the Toyota Prius line--offer ratings above 36 mpg combined.

None of them, however, may be as useful in crowded urban streets. And that's why Smarts are all over European capitals like Rome and Paris.

Sprawling U.S. suburbs, with their three-lane arterial roads and hundreds of acres of mall parking?