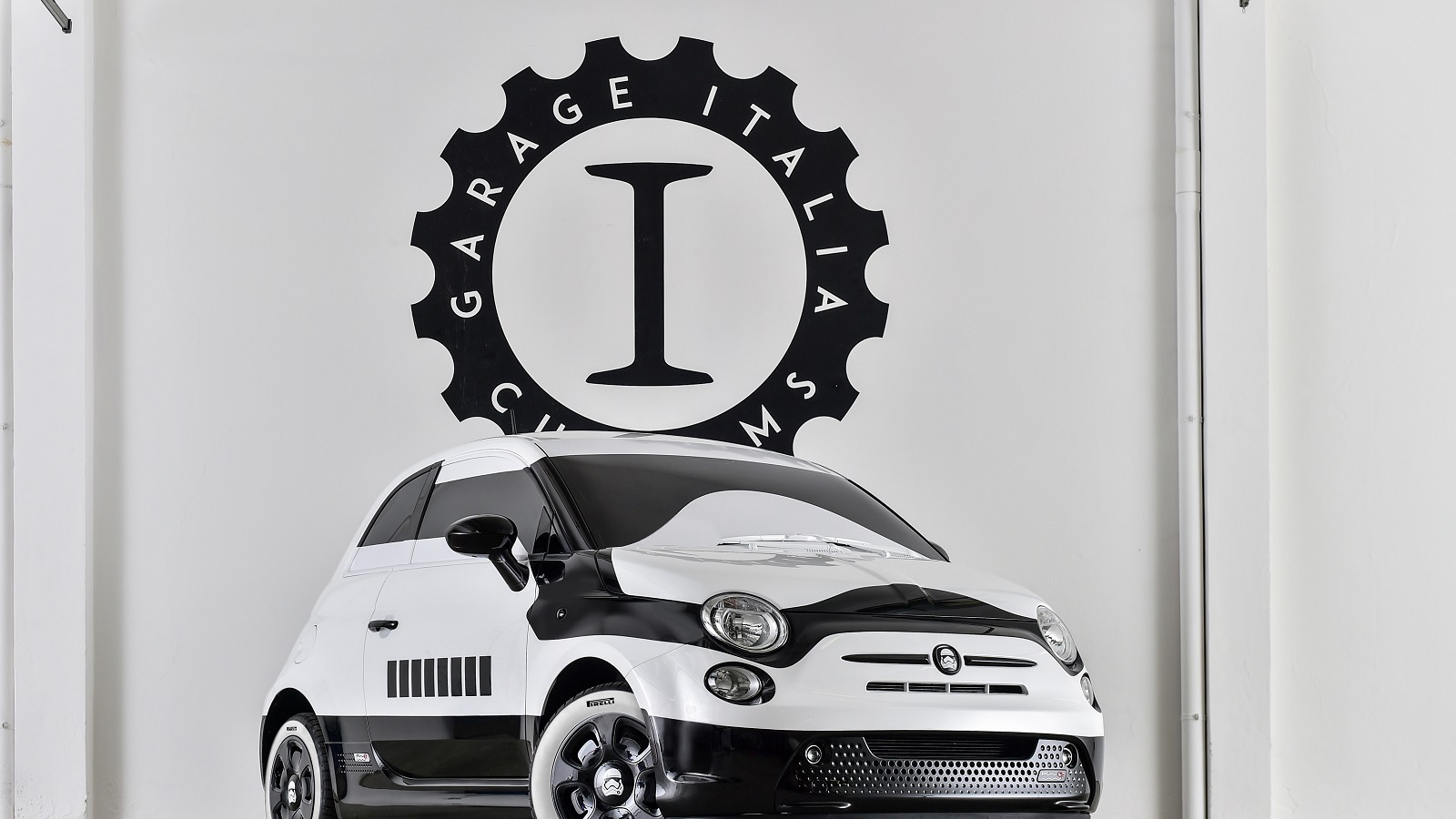 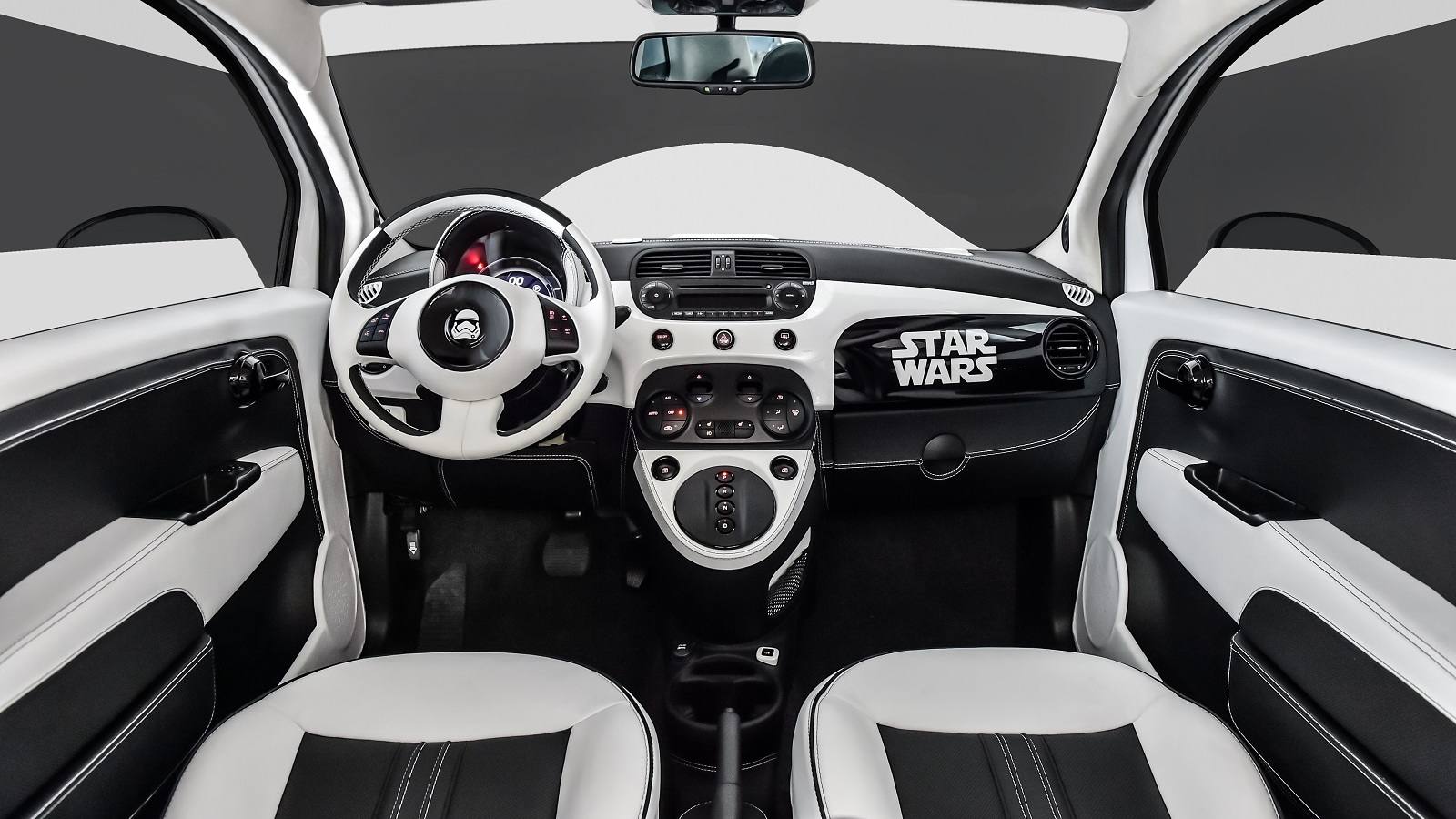 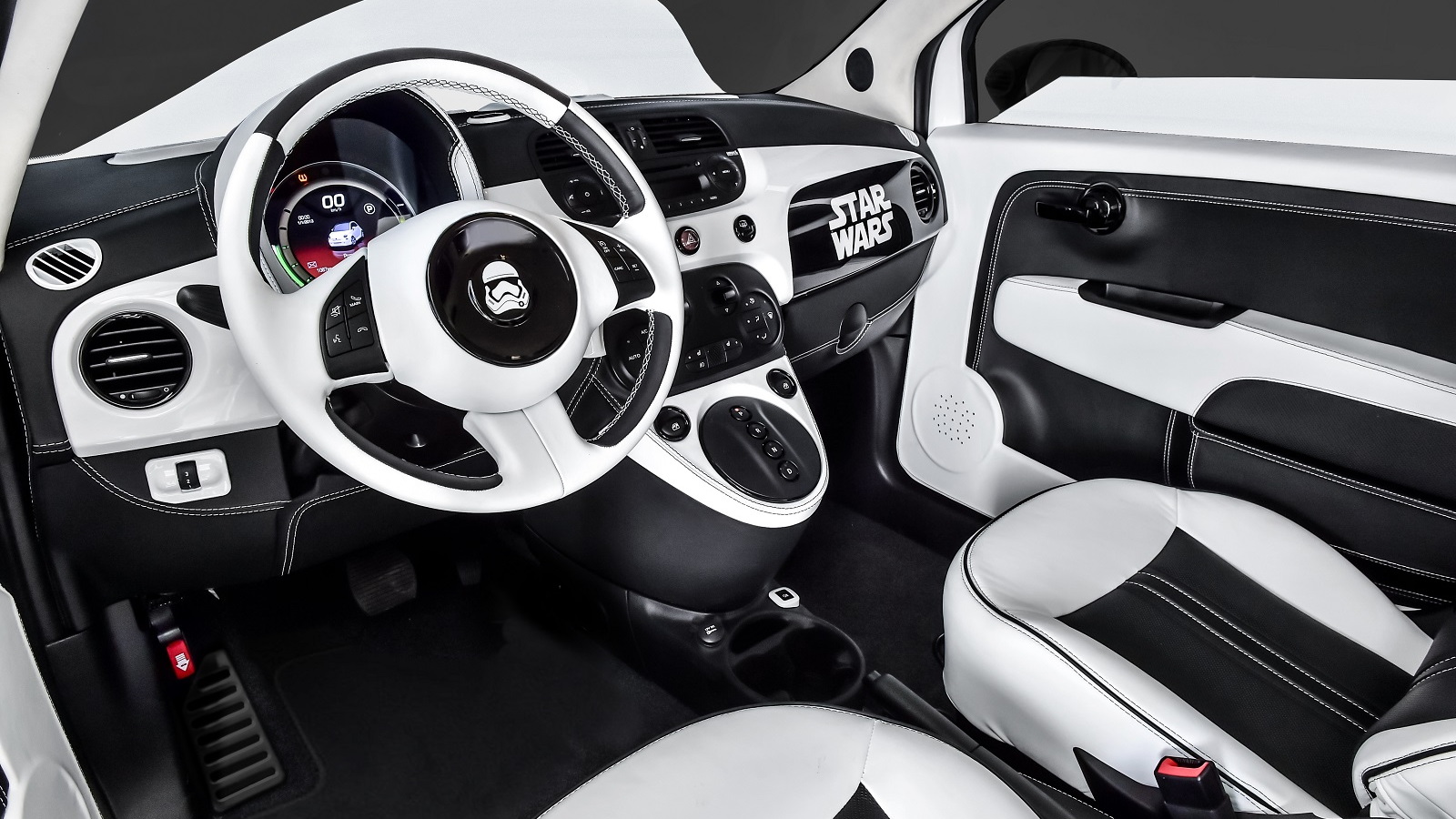 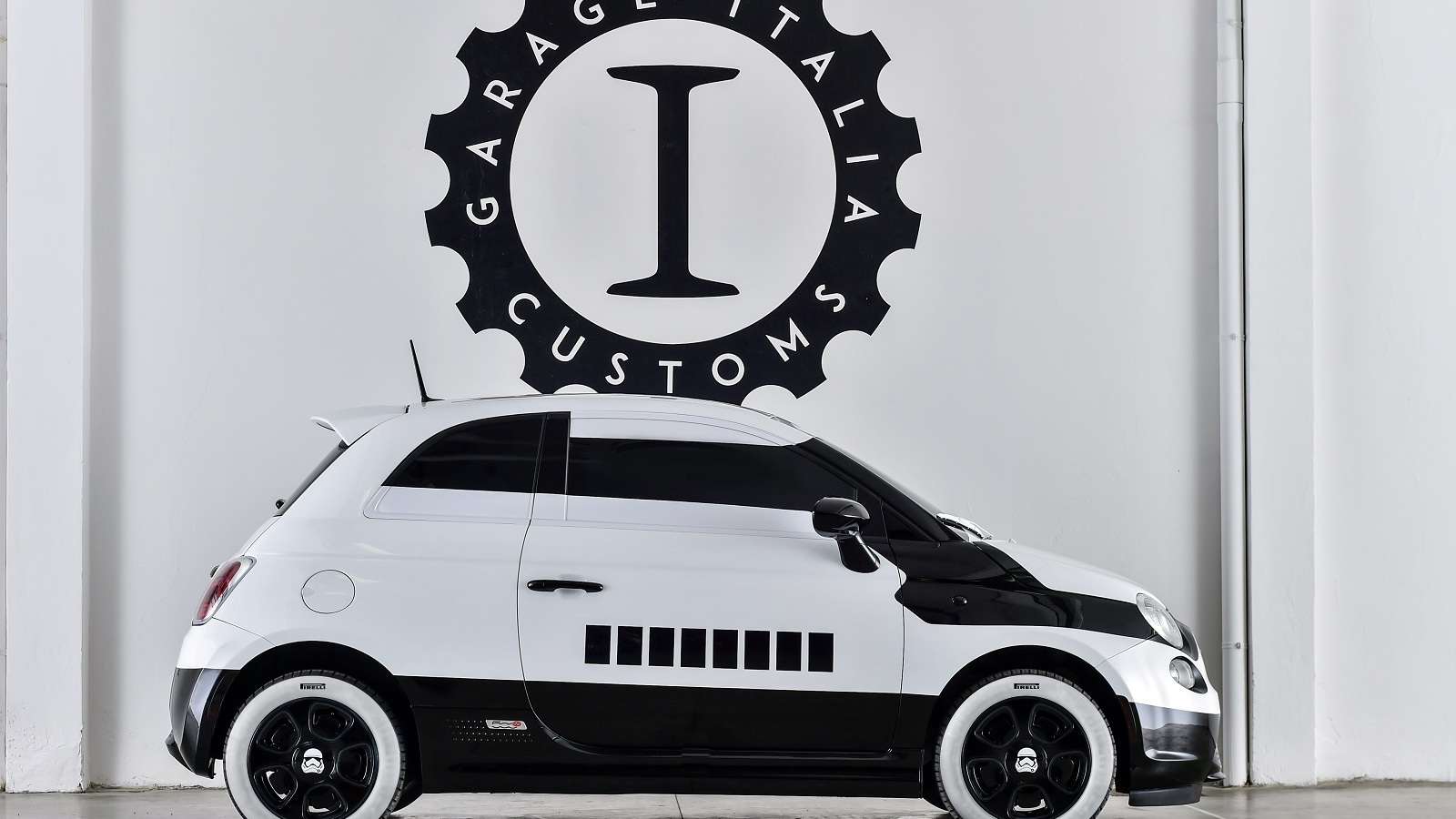 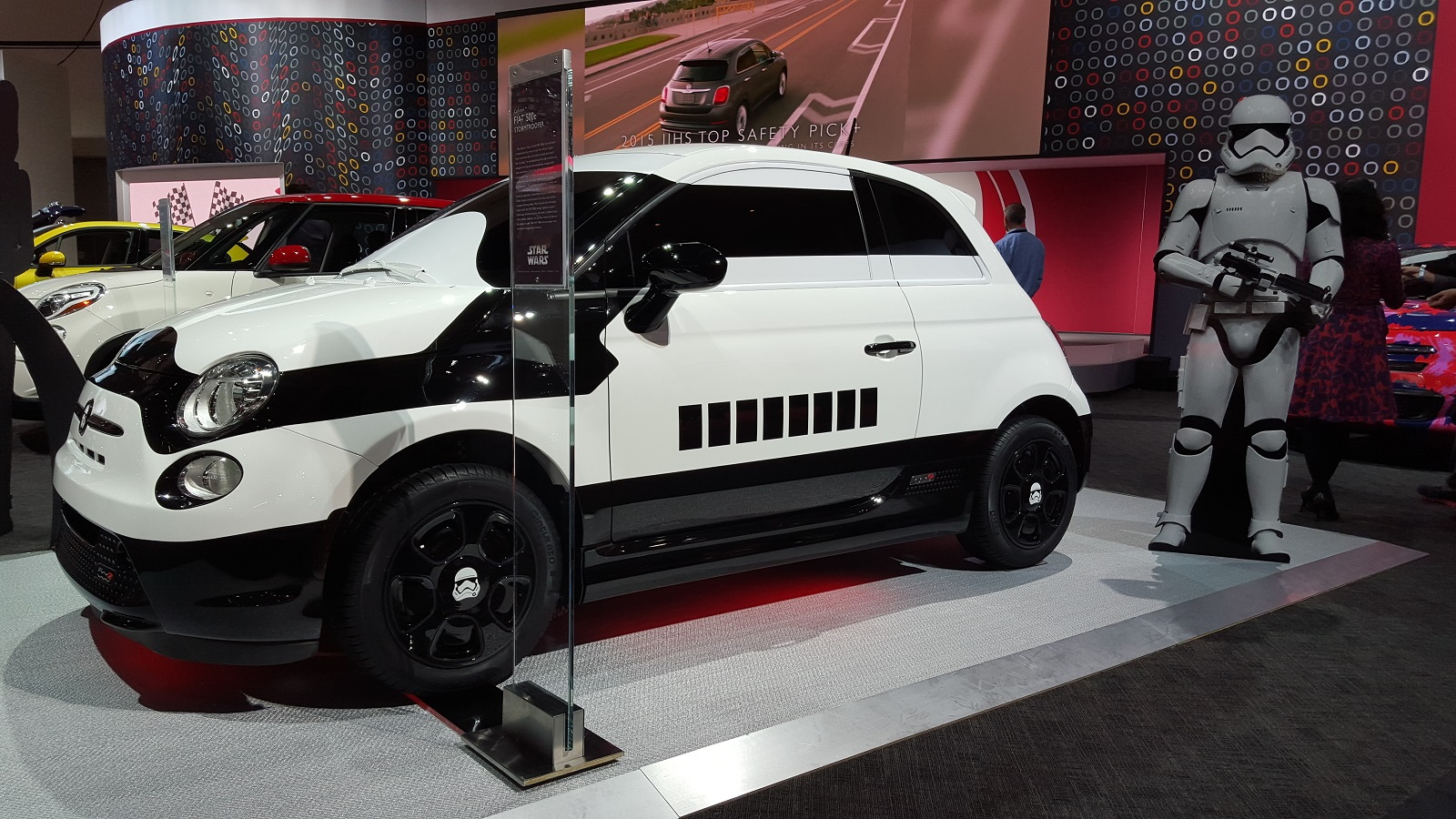 There it was, in one corner of the Fiat display at last week's Los Angeles Auto Show: an odd black-and-white Fiat 500e electric car.

On closer inspection, it proved to be the custom-painted "Fiat 500e Stormtrooper" ... though it's not clear that would have been obvious at first glance.

Why this car, now? Because Star Wars: The Force Awakens opens in December, and ... movie tie-ins.

According to the Fiat Chrysler press release, it's all part of "an expansive, historic promotional campaign" to support the movie.

On September 4 (which is "Force Friday," for those among you who aren't Star Wars fanbois), Uber riders could get a "once-in-a-lifetime chance" to ride for free in a Dodge Charger that was also modeled after a Stormtrooper.

The electric Fiat at the LA Show was "inspired by the armor of the First Order Legion, with...two-tone black and white custom painting."

The visor and helmet of the First Order stormtrooper were represented by black wraps on the windshield and side windows, while the interior was entirely black and white as well.

Then comes the marketing payoff: "Much like the Stormtrooper armor itself, the Fiat 500e brings together modern technology and functionality, but with an added classic Italian design, making it the perfect vehicle to take on the galaxy in style."

Here's the thing, though: This single concept isn't the only small electric car known as a Stormtrooper.

MORE: That BMW Owner Who Got A Fiat 500e Electric Car? The BMW's For Sale

Ever since the BMW i3 electric hatchback went on sale in May 2014, it's been available in a glossy white body color.

But with its gloss black hood and roof, the white i3 looks a lot like ... wait for it ... a Star Wars Stormtrooper.

And that's exactly what owners of the white i3s often call their cars, as in, "Hey, guys! I saw another Stormtrooper on the 405 South just past LAX, was that you?"

They're even more Stormtroopersque when painted in the black-and-white livery of the Los Angeles police department, which is testing an i3 for several months this year.

We say that, of course, with great fondness and respect: This site has occasionally been known to geek out on its own.

The Fiat 500e Stormtrooper was created for Fiat Chrysler by Garage Italia Customs.