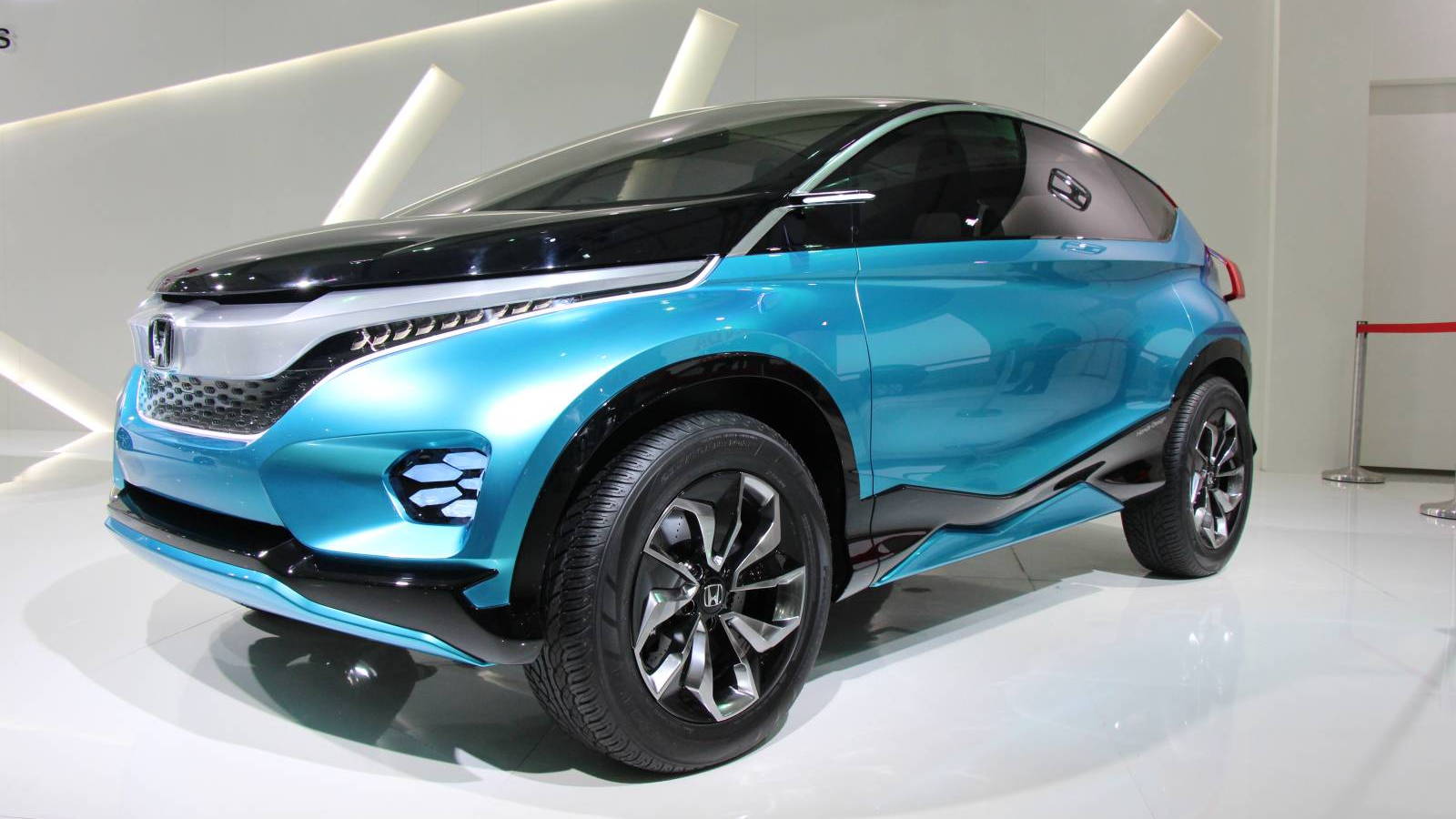 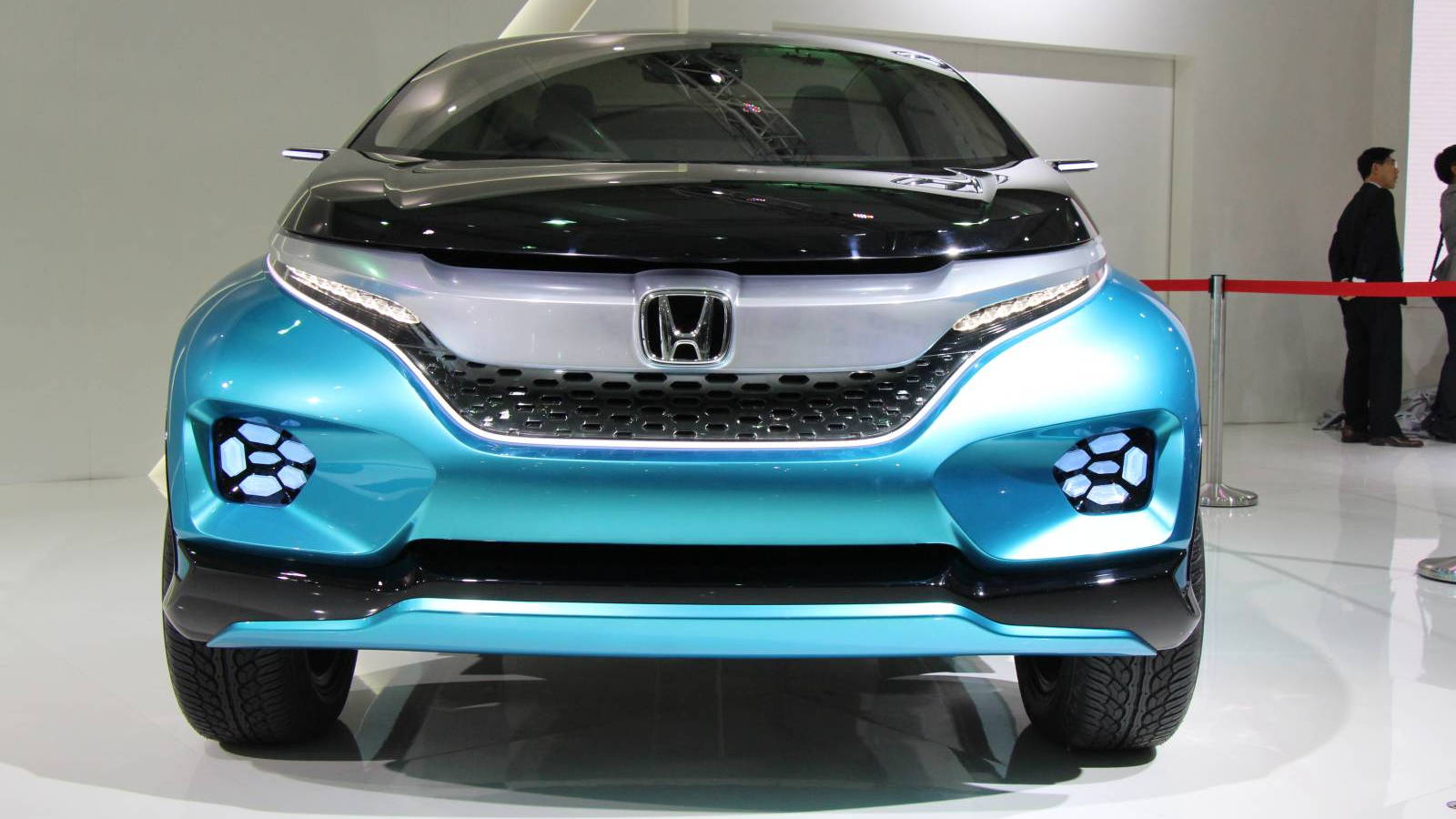 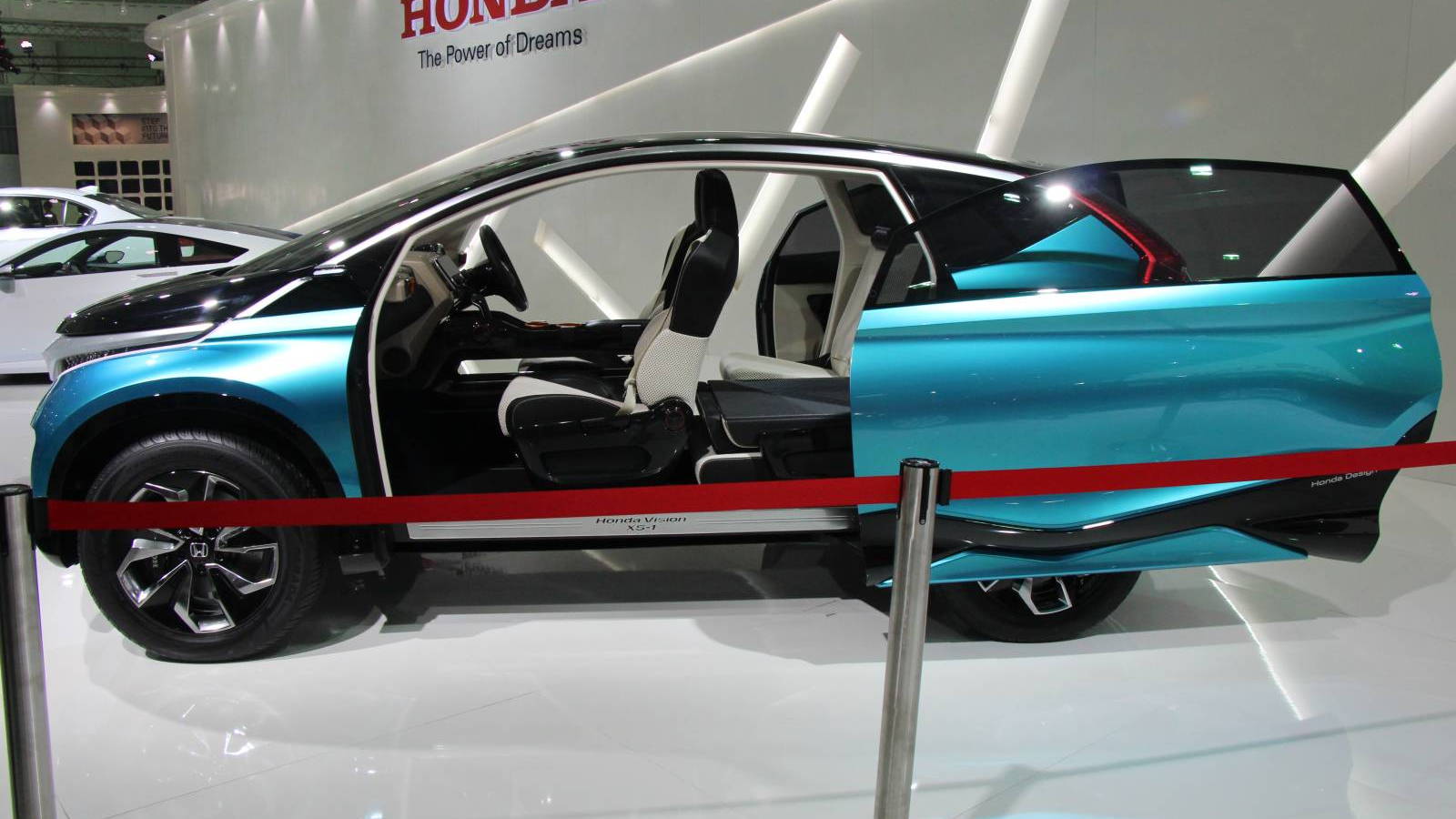 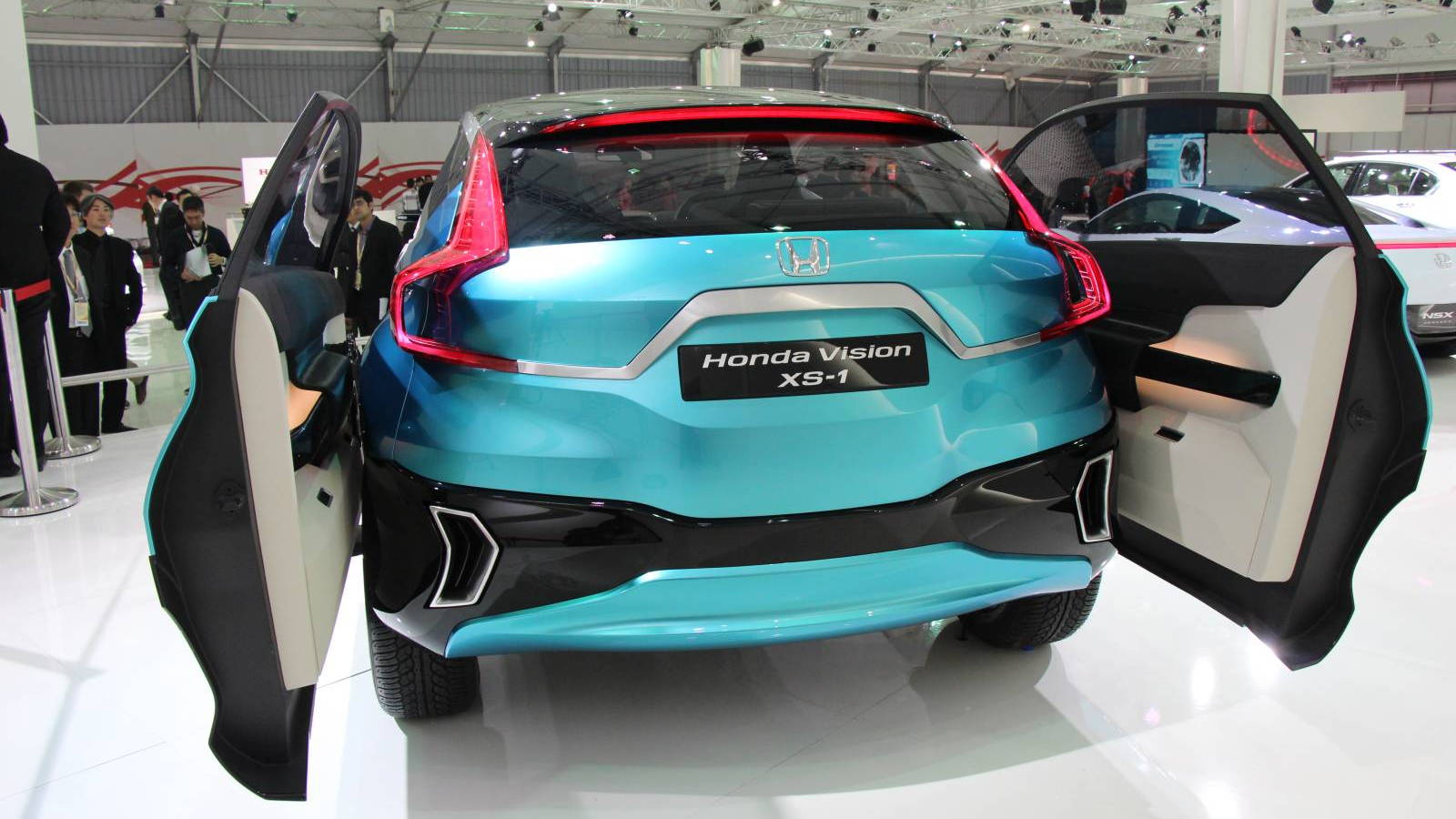 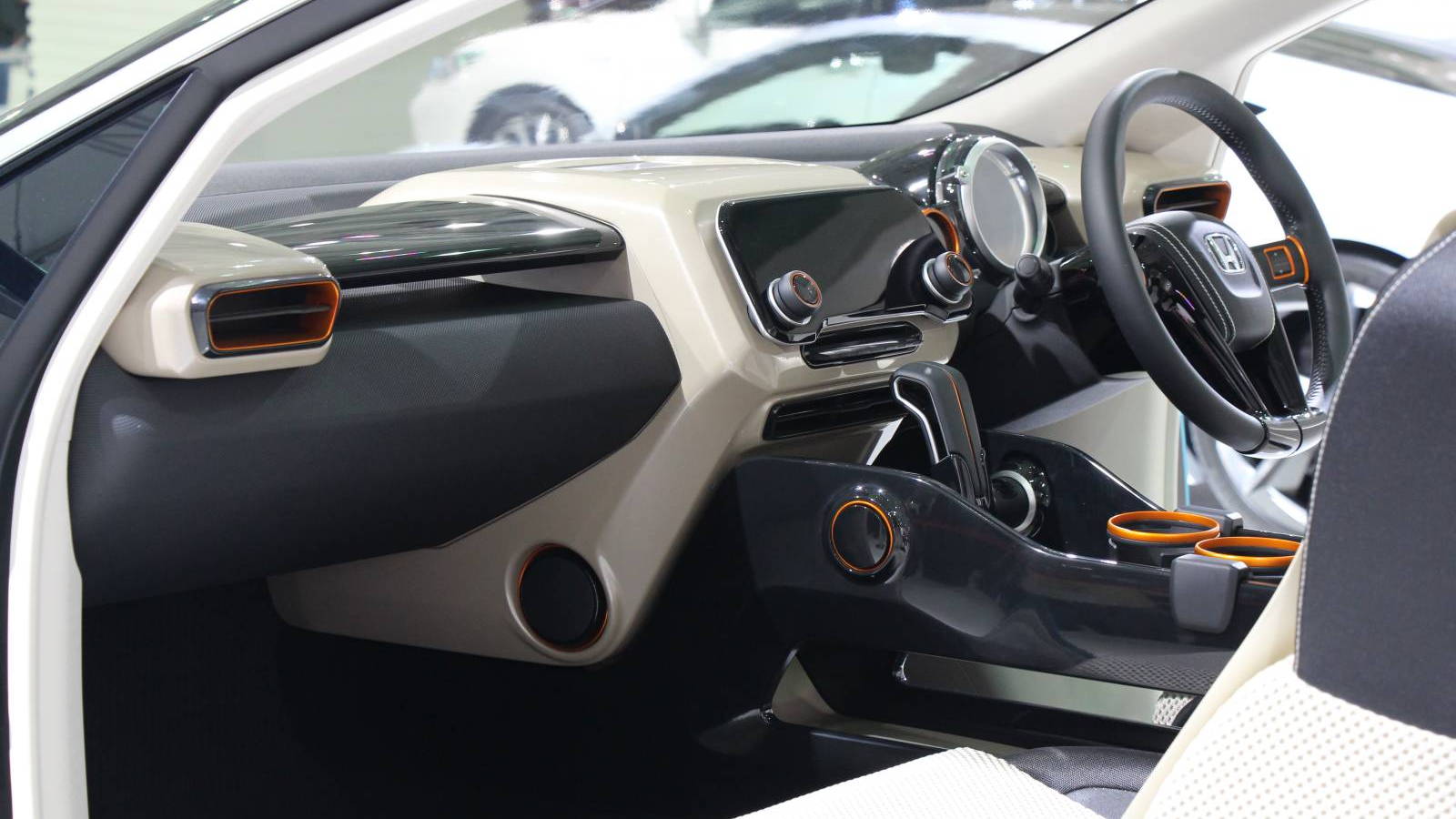 At the 2014 India Auto Expo in New Delhi, automakers debuted a crop of concept models with sport-utility vehicle styling and packaging--if not genuine off-road all-wheel-drive abilities--in even smaller vehicle segments than we've seen so far.

While not all the tiny crossovers may see production in their current form, the group shown today numbers some that will be among the smallest utility vehicles on sale anywhere in the world.

Ranging from minicars to subcompacts, they are even dwarfed by the Honda Vezel, a subcompact crossover based on the 2015 Fit that will be launched in the U.S. later this year (under a different name).

They include models from Honda, Volkswagen, and Chevrolet--names known in the U.S.--plus French maker Renault and Indian brand Tata.

The styling possibilities of a tiny SUV were demonstrated by the Honda Vision XS-1 concept.

The Vision XS-1 features a few surprising design elements, including taillights shaped into freestanding loops and a jagged line along the rocker panel.

However, the most surprising thing about this little Honda might be that it can seat seven. All three rows are accessed through a single sliding door that probably isn't production-feasible.

In fact, Honda says it has no plans to produce the Vision XS-1. The concept was meant simply to show the company's interest in small cars, a segment Honda believes has significant growth potential. 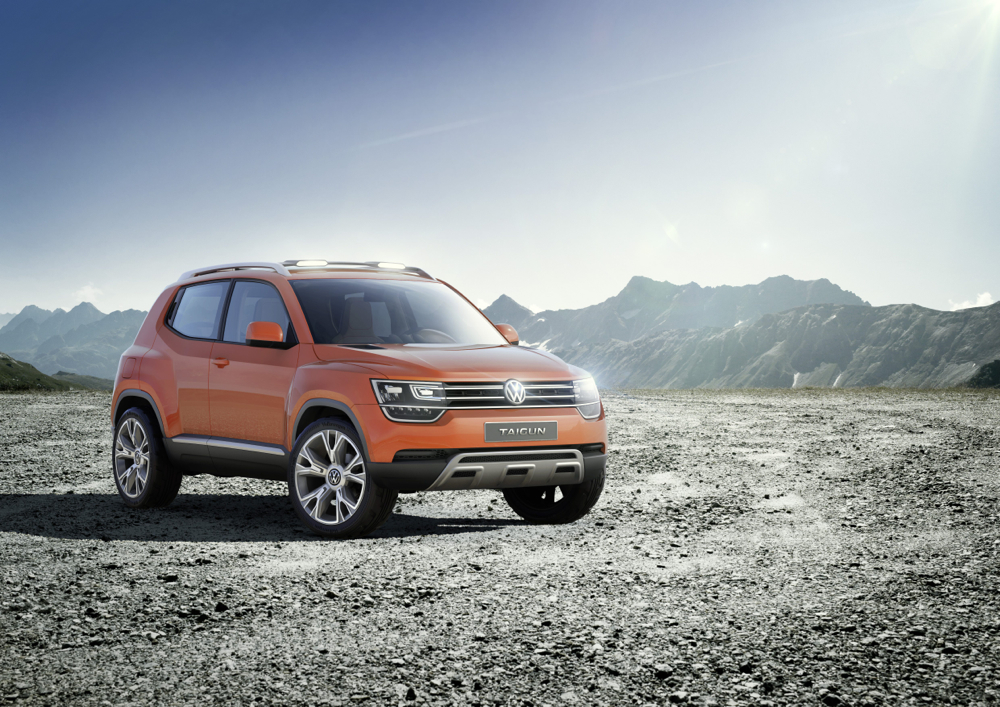 The Volkswagen Taigun was first unveiled at the 2012 Sao Paulo Motor Show, but--like the CrossBlue Coupe Concept--VW decided to show it a second time.

Styling and dimensions haven't changed--the Taigun is still about a foot shorter than a Nissan Juke--although feedback received after its Brazilian debut led to a rear-mounted spare tire.

Despite its off-road looks, the Taigun was designed for urban driving. Its new "Ultra Orange" paint should stand out in traffic.

Volkswagen says that's enough for a 0 to 62 mph time of 9.2 seconds, and estimated fuel economy of around 50 mpg on the typically-optimistic European cycle.

With two auto-show appearances under its belt, the Taigun could well get the green light for production soon. 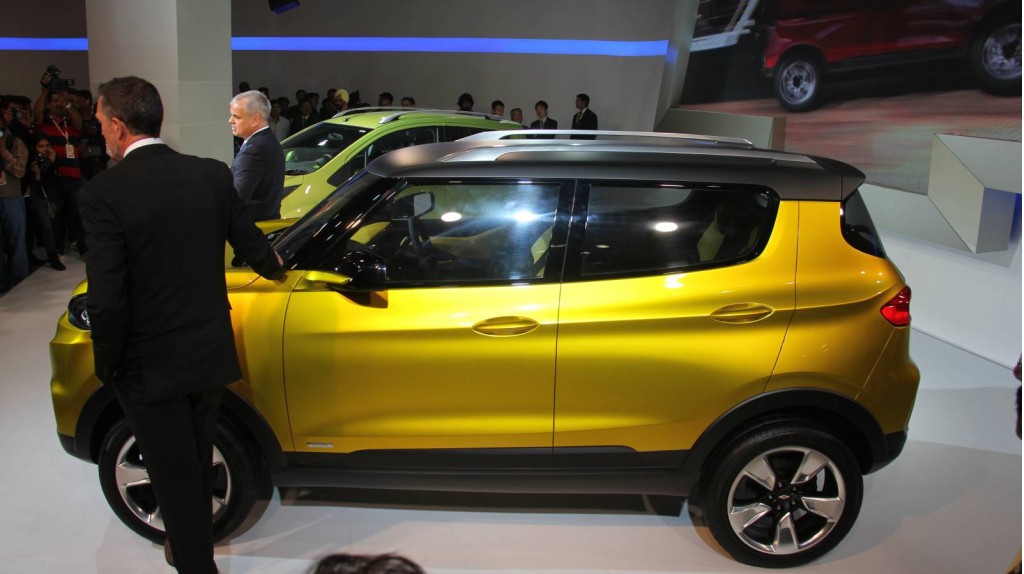 The Chevrolet Adra was designed locally at General Motors' Technical Centre-India in Bangalore.

According to GM, the goal was to fit the traditional benefits of an SUV--such as high ground clearance and elevated seating position--into a more compact package with styling that references global Chevrolet models.

That's why this tiny concept has a front end that's vaguely reminiscent of a Chevy Traverse's, and a retro contrasting roof.

So far, the Adra is just a styling study, as GM did not mention any plans for production--but it looks awfully close to a production-ready car to our eyes.

The Indian automaker known for building the world's cheapest production car--the Nano--came to Auto Expo India with a small SUV of its own.

The Tata Nexon concept was part of a group of concepts that embodied the company's new "DesigNext" styling theme, which will be used on future production models.

While Tata did not announce production plans for the Nexon, such a vehicle seems like a logical extension to it's small-car range, and could serve as an alternative to the large SUVs the company also sells. 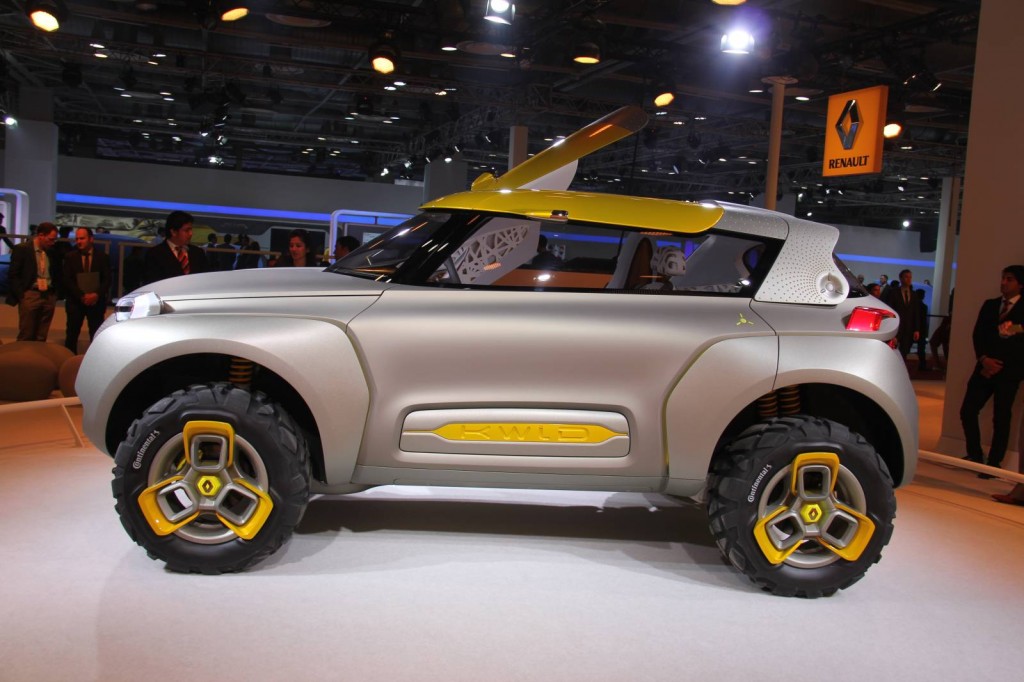 The Renault Kwid is the first concept car unveiled by the French automaker outside of Europe, and it has been tailored to the Indian market.

As with the other small SUVs unveiled at Auto Expo India, the front-wheel-drive Kwid has the styling of an off-road vehicle, but not the capabilities.

The concept is powered by a 1.2-liter gasoline engine, hooked to a dual-clutch transmission controlled by touch pads next to the steering wheel.

However, Renault says the Kwid is "Z.E. ready," meaning an all-electric version could be built if the company decides to put the Kwid into production.

The Kwid also comes with its own drone--called a "Flying Companion" by Renault. It could possibly help save fuel while looking for a parking space.