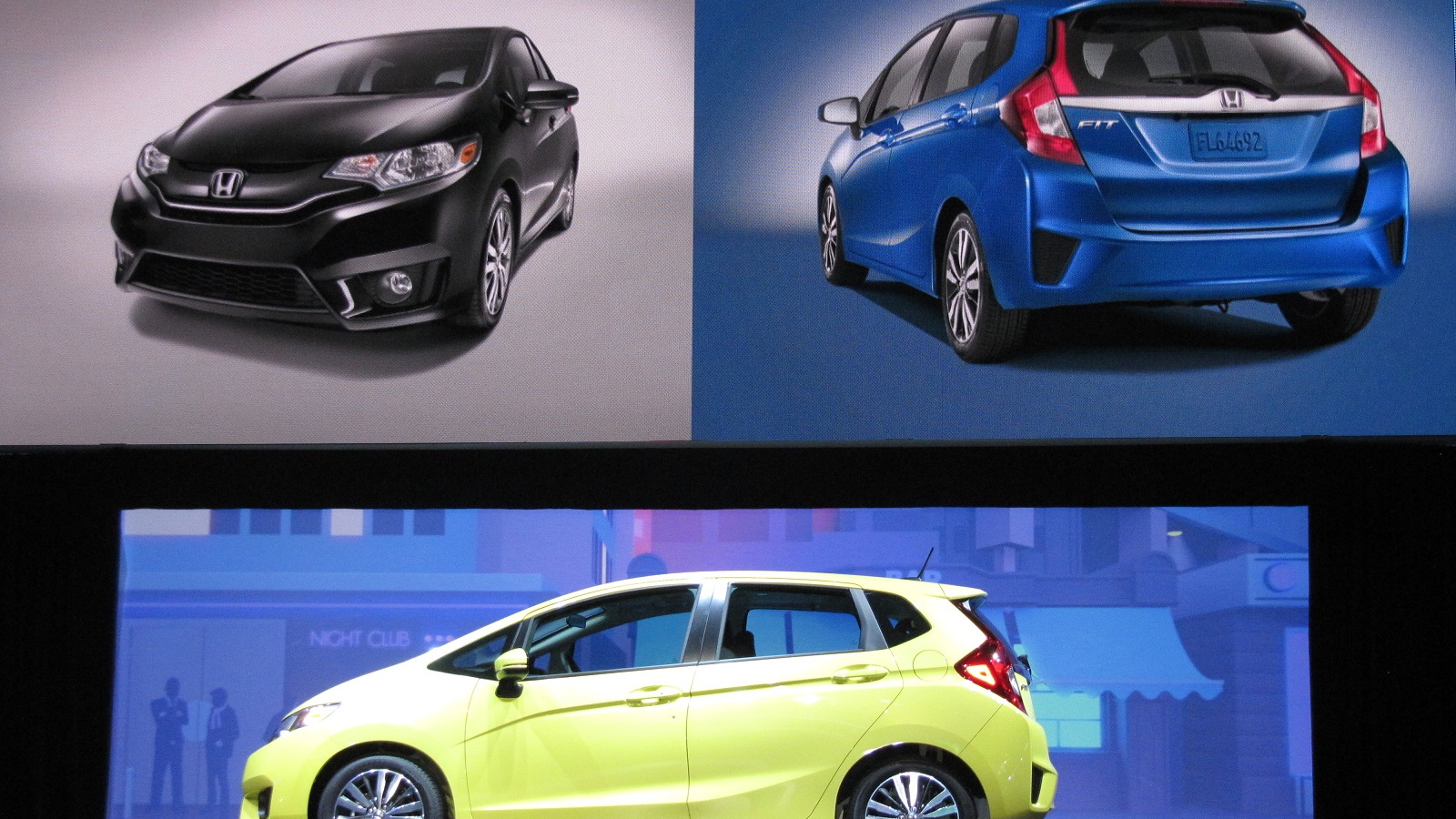 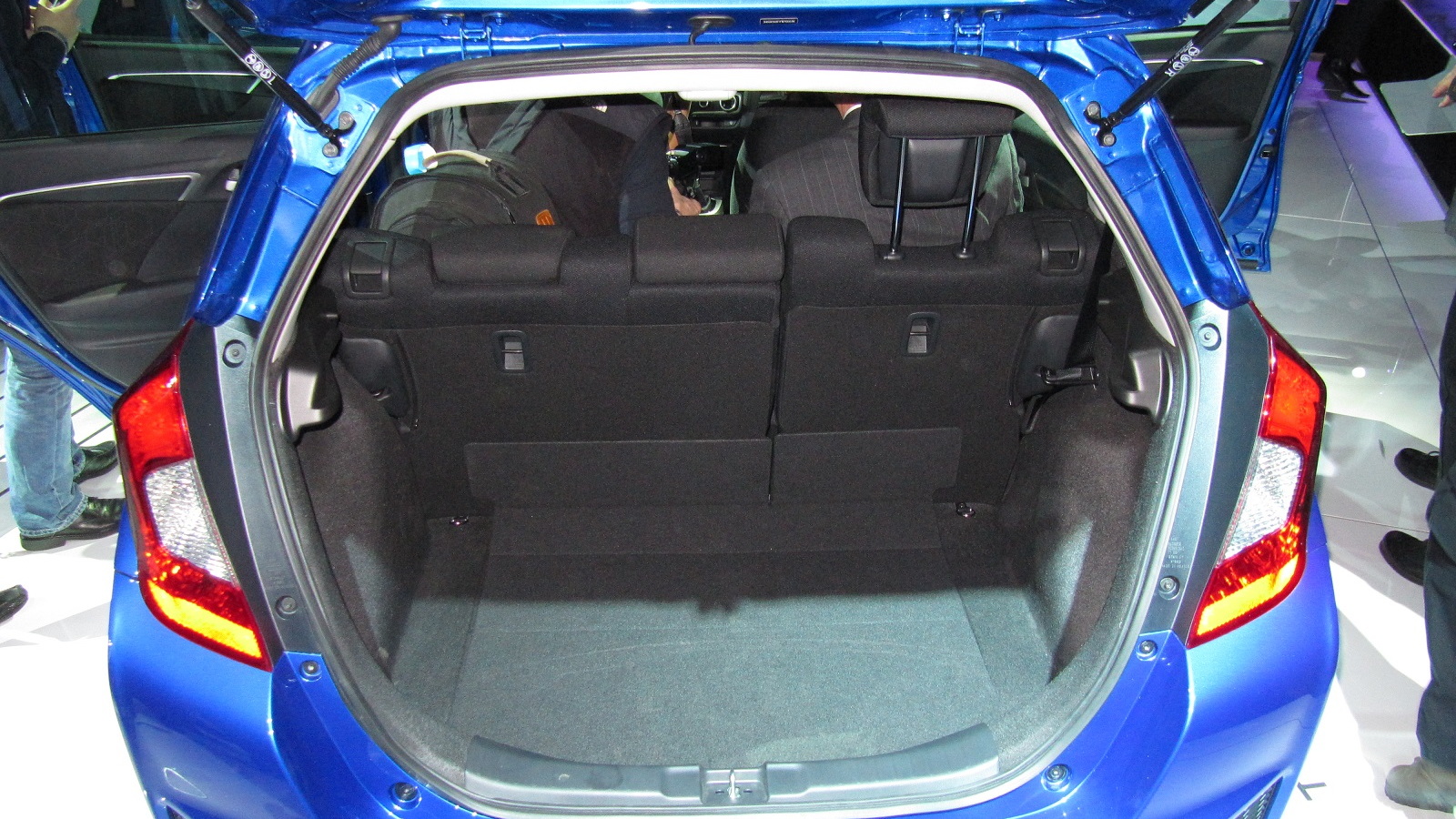 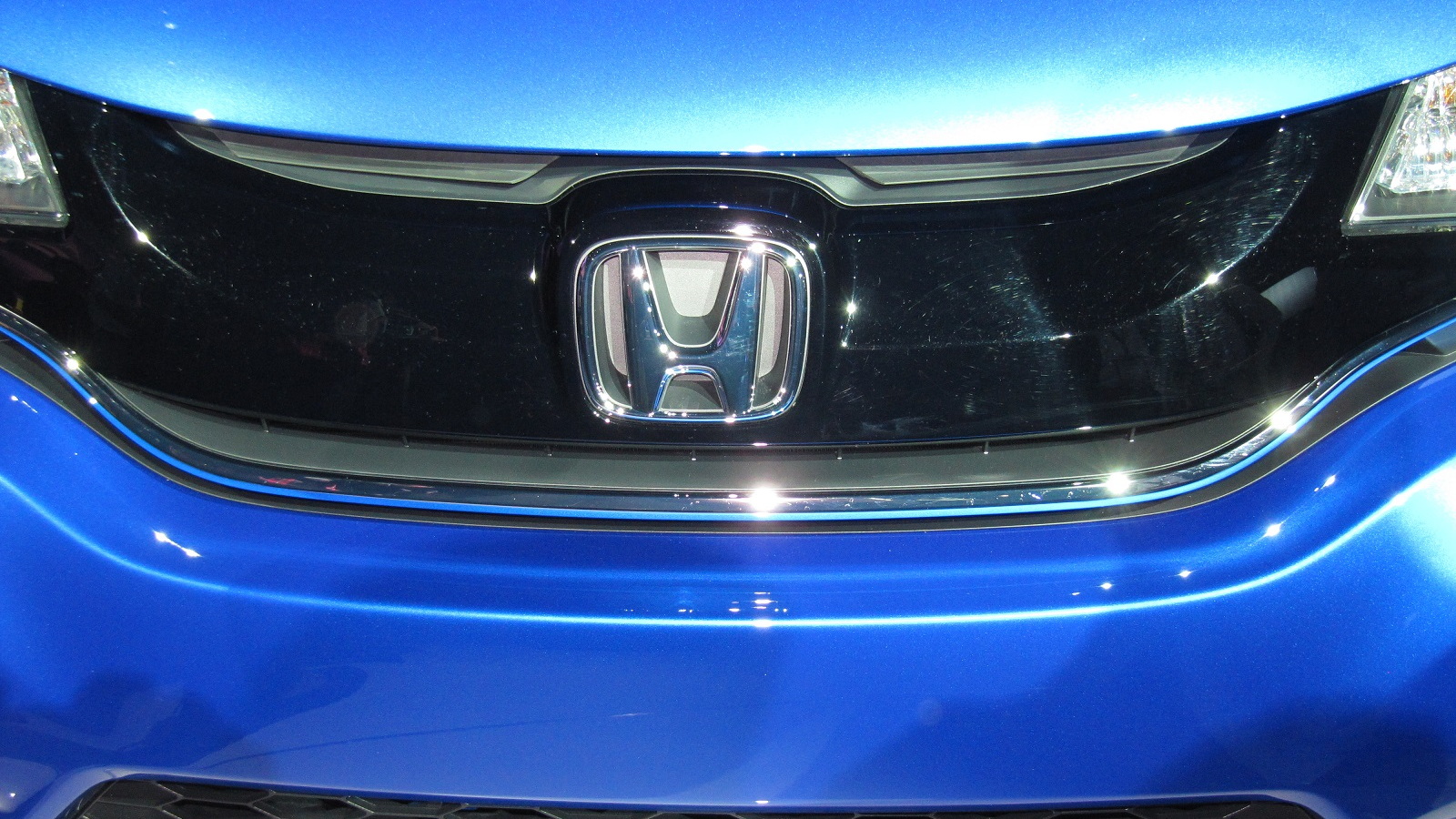 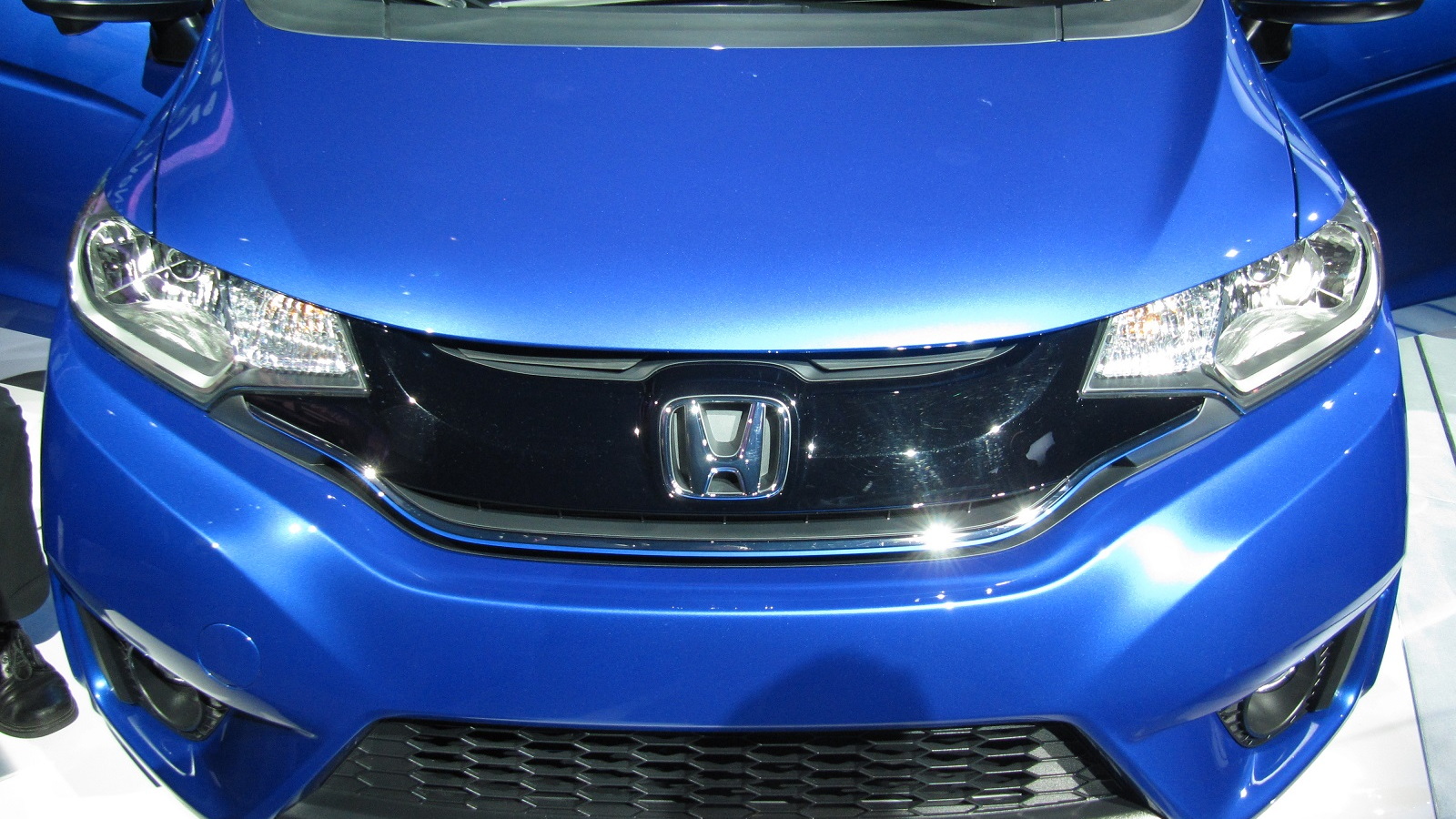 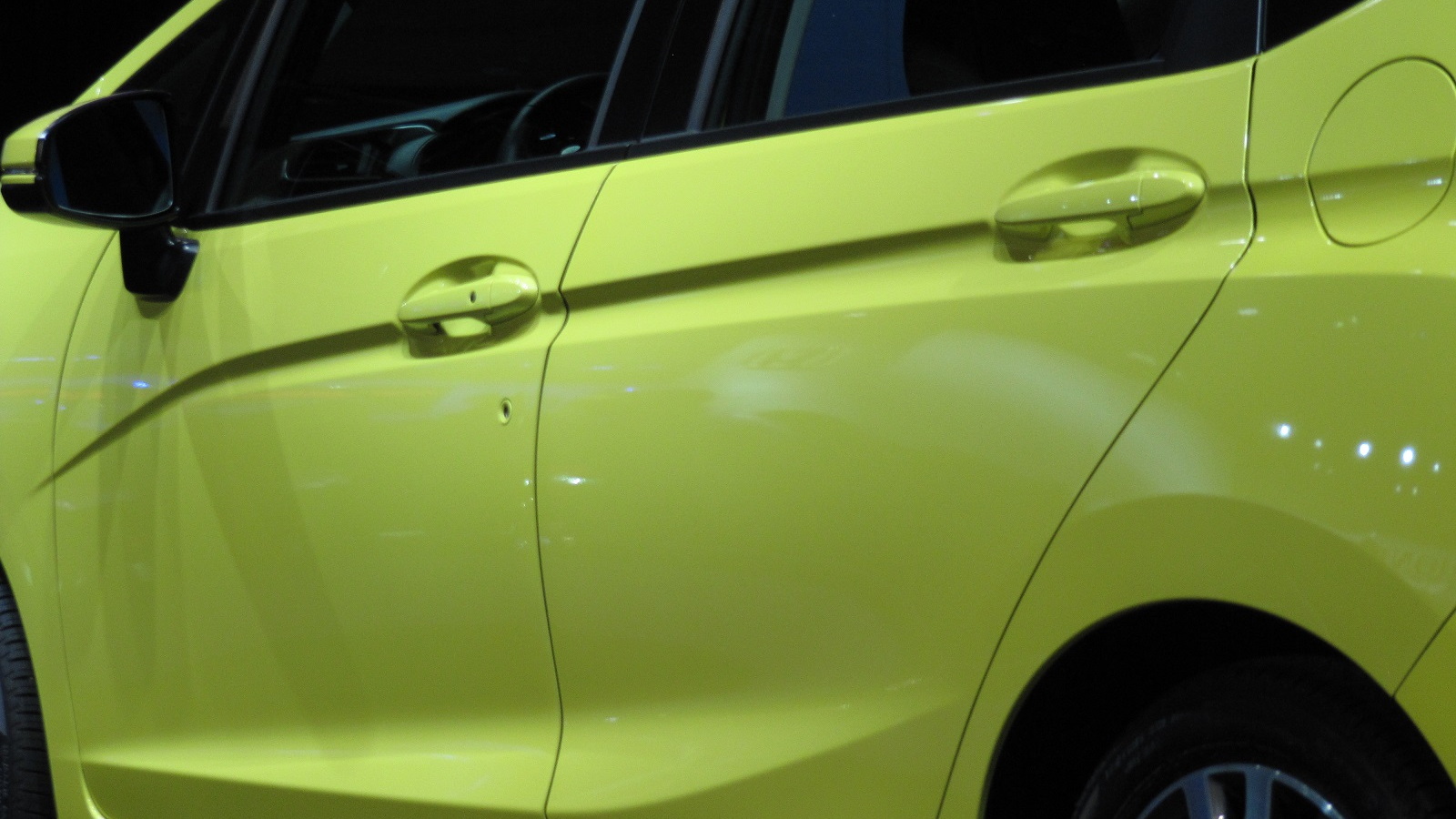 The all-new 2015 Honda Fit was unveiled this afternoon at the Detroit Auto Show--one of very few cars that could conceivably be deemed "green" at an event dominated by the huge new 2015 Ford F-150 full-size pickup truck.

The new Fit is a complete redesign of the five-door subcompact that won raves for its interior space and versatility in its previous two generations, the last of which was launched in 2009.

The 2015 model has more interior space in the same footprint, more refined interior features, a more powerful engine, better acceleration, and higher gas-mileage ratings than its predecessor. And it continues to promise enjoyable handling and roadholding, along with a quieter ride and new connectivity options.

The lines of the new 2015 Fit extend styling themes seen on other Hondas, leading off with the new horizontal corporate grille bar with a large centered "H". This sportier and more aggressive front end leads into the Fit's traditional "one-box" shape, with a short, stubby nose, a sharply raked windshield, and an almost vertical rear end. The tailgate features a horizontal chrome band, and is framed by high LED taillights that sweep into angular body-side lights.

But the latest Fit tapers more toward the rear of the roof, and adds a sharp horizontal body-side crease with a downward dip at the front that draws attention away from its tall,  upright stance. The side windows incorporate a large triangular window ahead of the front-door opening, with a relatively low window line in front that rises gently toward the rear and ends in a larger "third" window (technically a fourth) in the roof pillar.

The larger 16-inch five-spoke wheels give the new Fit a sportier stance, and reduce the tall-car/small-wheel challenge of its predecessors. A long tailgate spoiler cuts aerodynamic drag, as do a smoother underbody and vertical side surfaces on the rear bumper fascia. It's a little busy from certain angles, but it remains a very modern take on a subcompact hatchback that clearly remains very much a part of the Honda family.

The latest Fit rides on a wheelbase that's 1.2 inches longer, but is 1.6 inches shorter overall. Inside, Honda has managed to pack almost 5 cubic feet more passenger volume into the same on-road footprint. Rear legroom in particular has grown almost 5 inches, with easier access through the rear doors. The 2015 Fit retains the unique and hugely flexible Magic Seat feature, providing multiple seating positions and allowing part or all of the rear seat to be folded, or the entire seat to be removed altogether. With the rear seat folded flat--a more likely configuration--the cargo volume is 52.7 cubic feet, a remarkable amount for a subcompact car of any shape.

The airy cabin features more soft-touch surfaces and premium interior materials for a more refined feel than the hard plastic surfaces of earlier Fits. The all-new dashboard has a cockpit feel, with a tiered instrument cluster and blue-faced instruments.

Large knobs on the center stack for temperature, fan speed, and vent control make the heating and ventilation system easy to understand, and a pair of cup holders sits just ahead of the shift lever--with bottle holders in each door bin too.

The single engine choice is a 130-horsepower 1.5-liter four-cylinder unit that produces 114 lb-ft of torque, a boost of 13 hp over the previous Fit. It's part of Honda's new "Earth Dreams" line of direct-injected and more efficient engines.

Honda projects that the Fit equipped with the CVT will have EPA fuel-economy ratings of 36 mpg combined (33 mpg city, 41 mpg highway), the highest of any subcompact with a standard engine and automatic transmission. The company hasn't released predicted ratings for the six-speed manual version.

Handling and roadholding is improved, Honda says, by a more rigid body shell, the longer wheelbase, and revised suspension geometry--including new rear dampers--that also reduces in-cabin noise and smooths the ride. The Fit has always been on the sportier side of the subcompact spectrum, and while we haven't yet driven the car, the 2015 model seems to have a good chance of retaining the maneuverable and fun-to-drive character of earlier Fits.

The 2015 Honda Fit is expected to earn top safety scores from both the National Highway Traffic Safety Administration (NHTSA) and the Insurance Institute for Highway Safety (IIHS), according to Honda. While the new body structure is 57 pounds lighter than that of the last Fit, it uses more high-strength steel than ever before. In particular, Honda says, the new Fit is expected to earn the top rating of Good in all IIHS tests including the tough new small-overlap barrier test, leading it to be designated an IIHS Top Safety Pick for 2015.

Every new Fit will be fitted with a rear-view camera and Bluetooth connectivity as standard equipment. Options include heated front seats and side mirrors, pushbutton start with smart entry, a moonroof, and Honda's well-received LaneWatch display showing any vehicles in the car's blind spot. Also offered is a 7-inch touchscreen display audio system, with smartphone connectivity via the HondaLink feature. Leather seats are offered as an option in the Fit for the first time this year as well.

The 2015 Honda Fit will be built in a new plant in Mexico; production starts in February 2015, and the first cars should reach dealers in the spring. The underpinnings of the new Fit will also be used for a new subcompact crossover utility vehicle to be built at the same plant. Honda launched that vehicle in Japan late in 2013 as the Vezel, although it's expected to get a new name for the North American market. The company is also expected to add a four-door sedan model of the Fit later within a year or two.