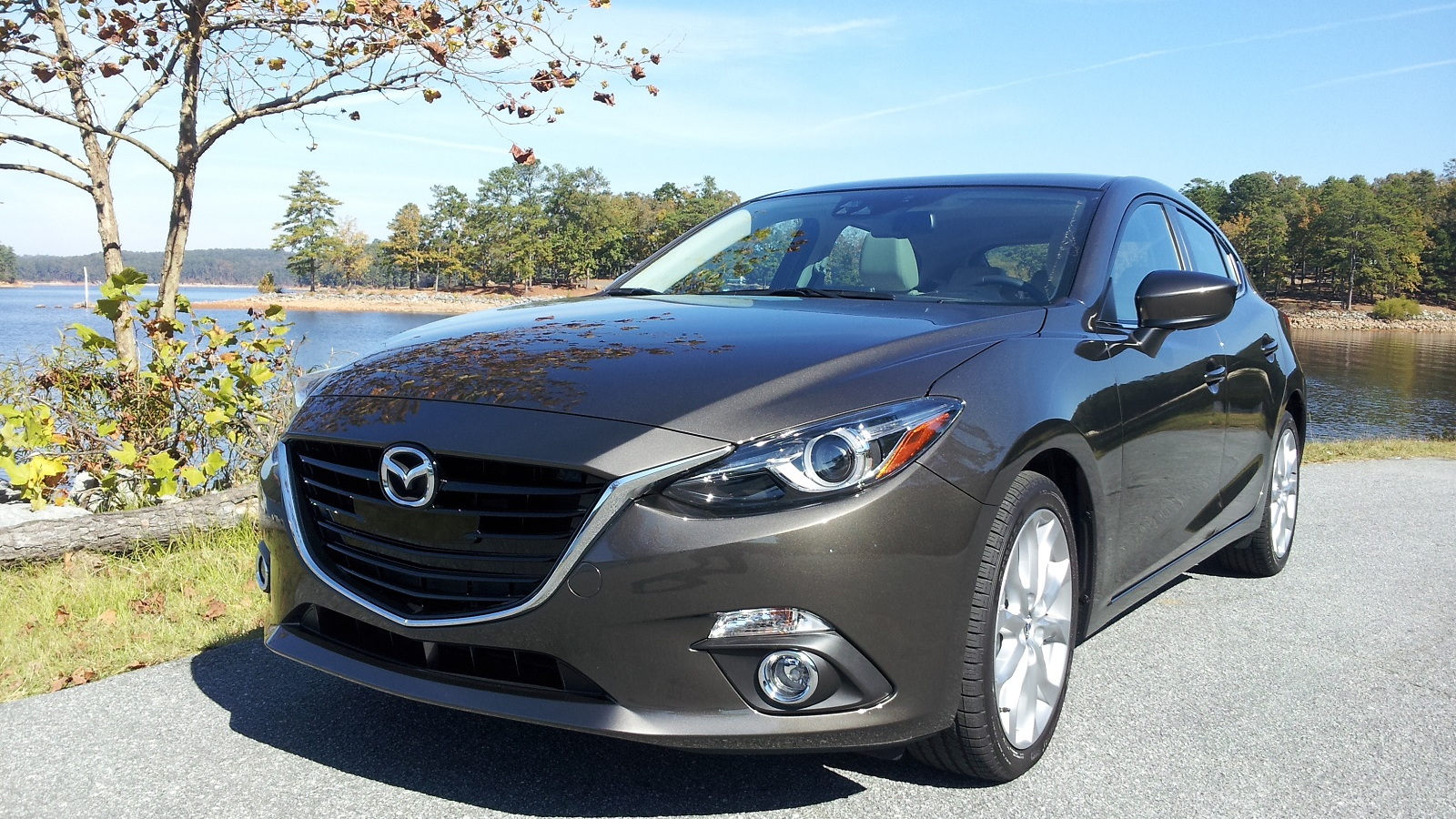 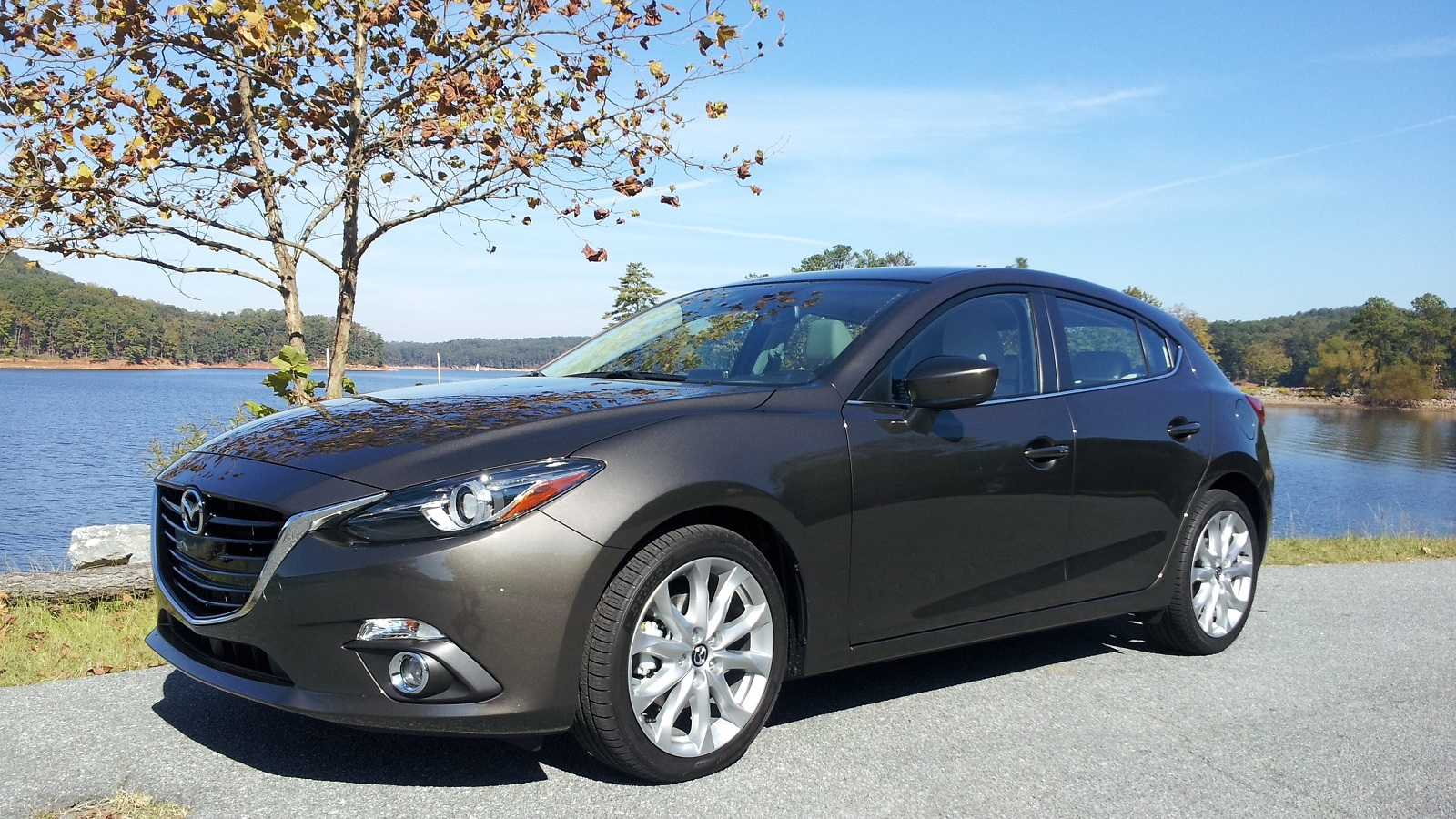 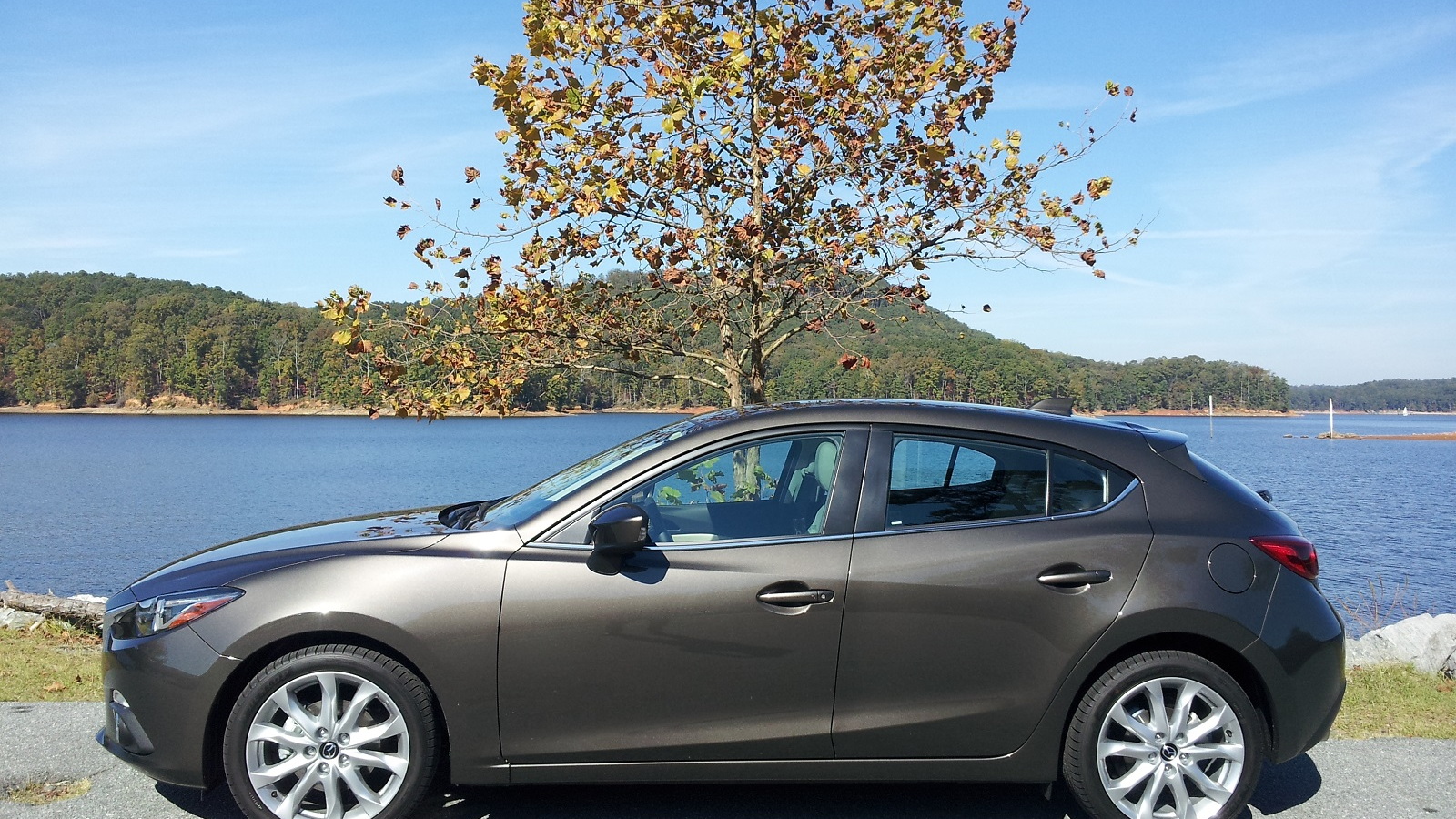 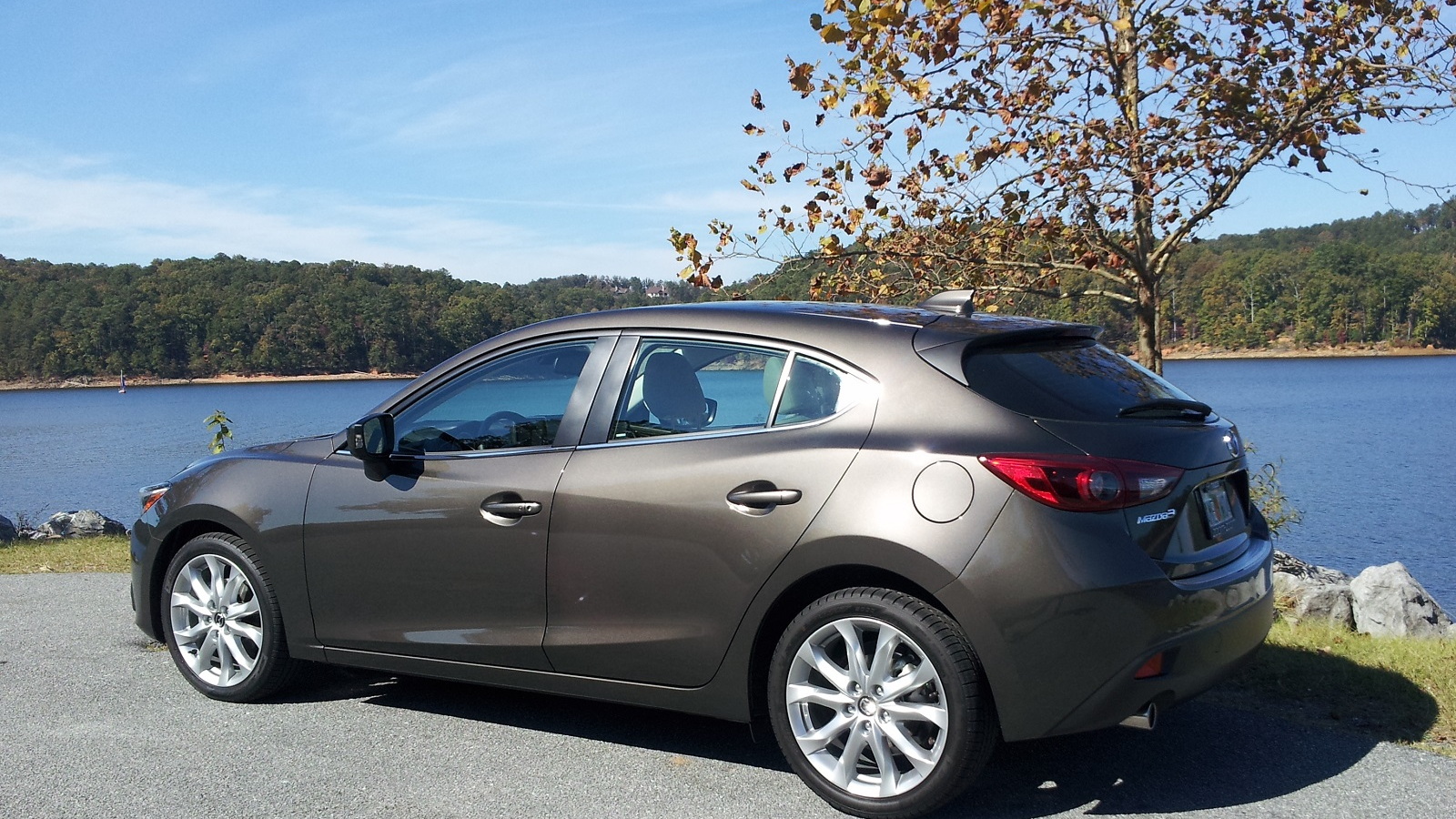 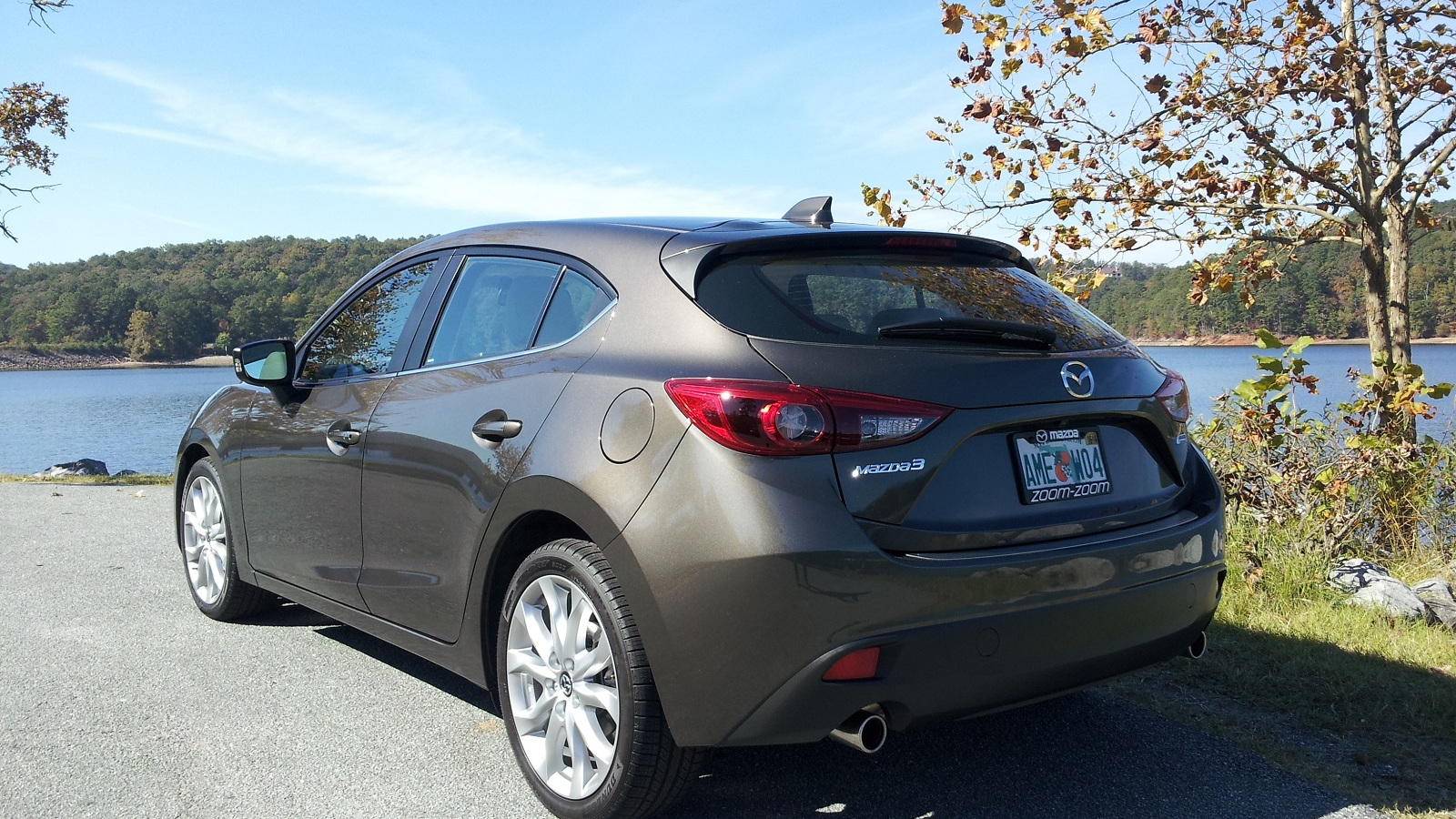 The 2014 Mazda 3 is the one of the more eagerly-awaited compact cars hereabouts, and now we've had a chance to spend 90 minutes behind the wheel.

During a recent test drive that brought together Best Car To Buy 2014 finalists, every High Gear Media editor got a chance to drive a variety of vehicles through the scenic rolling hills of Georgia.

Collectively, we swapped cars, compared notes, and winnowed down the field to each site's final nominees.

We still need to spend more time in a Mazda 3 to do a proper fuel-economy test; our relatively energetic driving on a variety of a terrains didn't reflect our usual test cycle.

But we can say that Mazda's all-new compact Mazda3 retains its sporty character, in a stylish and very distinctive new body--and early indications are that its SkyActiv powertrain will be quite fuel-efficient indeed.

Approaching the Mazda 3 from the front, its profile isn't entirely apparent.

Thankfully, Mazda has dumped the rictus front "smile" styling for a prominent and handsome family grille that gives the new 3 a serious, substantial air.

It's not until you look at the side view that you can appreciate the new 3's long hood--necessary to accommodate the spaghetti-like SkyActiv exhaust headers--and the tapering roofline that makes the Mazda 3 hatchback almost what was called in the Sixties a "fastback".

That roofline doesn't do much for rear-seat room; this isn't a car you'll want to carry four big adults in for any length of time, unless some other compact entries.

But Mazdas have always been drivers' cars, and the all-new 3 doesn't disappoint on that front.

The interior is straightforward, sensible, and easy to figure out. The gauges are legible and the knobs are relatively intuitive.

We particularly liked the Active Driving Display, a clear panel that rises from behind the instrument cluster that shows speed, turn-by-turn directions, and other critical information.

Head-Up Displays are still a rare feature on any compact, though it's worth noting our test car was a top-of-the-line model with a sticker price right around $30,000.

Behind the wheel, the Mazda 3 held the road well, though the ride was firm and certain road surfaces brought out a fair amount of tire noise.

Mazda has always had some of the best electric power steering, with good (simulated) feedback from the road, and the new compact 3 continues in that tradition.

The 184-horsepower 2.5-liter four-cylinder engine in our test car was responsive and delivered brisk acceleration when pushed.

Our car had the six-speed automatic transmission, though a six-speed manual is also available--we suspect the automatic will deliver better gas mileage.

Which brings us to the big question: How did the car do on fuel efficiency?

In several runs up and down a hilly mountain road, along with straight shots up and back along freeways and multi-lane arterial roads solidly lined with strip malls, we got readings of 31 mpg and 33 mpg.

This particular model is EPA-rated at 31 mpg combined (27 mpg city, 37 mpg highway), so we at least confirmed that it hits its ratings.

Our experience with two earlier SkyActiv Mazda models--a CX-5 and an earlier 2012 Mazda 3--made us think that our new 2014 Mazda 3 will do considerably better in more representative driving.

We look forward to having that chance soon.

Meanwhile, for readers who are seeking sporty looks, good roadholding, and high fuel efficiency--but don't necessarily require the largest rear seats in the world--the 2014 Mazda 3 is a new and worthwhile entry to consider.