General Motors announced yesterday that it would replace the 120-Volt charging unit provided with every Chevrolet Volt, to provide what GM spokesman Randy Fox called a "more consistent charging experience."

Back in July, we reported that some of the charging units provided in Volts were overheating, becoming too hot to touch and in one case, even giving an owner a second-degree burn.

Now, after complaints from Volt owners, General Motors has agreed to swap out the unit for a beefed-up unit of the same design. Fox said upgrades to the design include a thicker cord from the unit to the wall socket.

Every 2011 or 2012 Chevy Volt built through last Friday, when the Detroit-Hamtramck assembly plant halted production for five weeks, will receive the new unit.

"It's not a safety recall," Fox told Reuters. "It's more of a customer satisfaction program."

The 120-volt charging unit, which GM often calls a “convenience charging cord," comes as standard with every Volt and is fitted into a recess under the load-bay floor.

The unit is comprised of a 120-volt domestic plug on one end, an electric charging unit in the middle, and a 16-foot cable with a J-1772 connector that plugs into the Volt's charging socket on the other.

It lets owners recharge the Volt's 16-kilowatt-hour lithium-ion battery pack from a domestic wall outlet in 10 hours or less.

Because the Volt has a smaller battery pack than all-electric cars like the 2012 Nissan Leaf, owners can recharge it using a 120-Volt outlet if they do so at night--meaning they aren't compelled to install a faster, dedicated 240-Volt, Level 2 charging station.

Because of this, many Volt owners can and do regularly recharge using only their 120-Volt charging unit.

As a consequence, GM's decision to replace the 11,000 or so 120-volt charging cables already shipped with Volts is a smart one, especially given the Chevrolet Volt’s recent poor press. 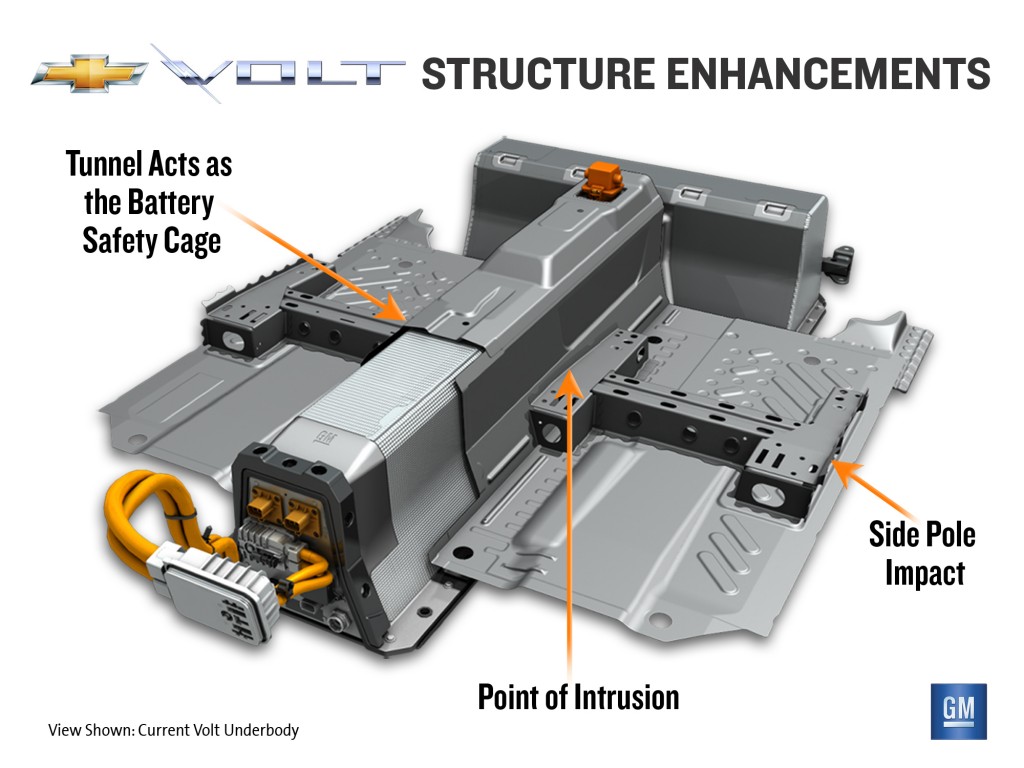 If you’re a Volt owner, expect to be contacted by Chevrolet in the coming weeks about exchanging your 120-volt charging unit.

In most cases, GM expects the exchange to happen at the same time the dealer fits additional reinforcements to the battery pack, to protect it better in the event of a major impact.

Dealers started taking appointments for that update this past Monday; it applies to Volts built from 2010 through December 2011.

While the Volt is at the dealer for the battery reinforcements and to have its charging unit swapped out, dealers will also check the mounting of the steering wheel airbag, to eliminate potential squeaks and rattles to resolve a third customer-satisfaction issue

Fox stressed that the airbag is properly installed and functions correctly, and that all Volts are safe to drive. He said dealers will inspect the fasteners and replace them if needed to eliminate cabin noise.