Via Motors, the extended-range electric truck conversion company with GM legend Bob Lutz on its board, announced today that it would use lithium-ion cells from A123 Systems in its battery packs.

The startup company will show its full lineup of electric-drive pickup trucks at next week's Detroit Auto Show.

The contract adds another low-volume entry to the list of electric vehicles using A123 cells. Others include the 2012 Fisker Karma, the upcoming Chevrolet Spark EV minicar, and the BMW ActiveHybrid 5 and upcoming ActiveHybrid 3.

The company says its trucks will have all-electric range of up to 40 miles, after which a 4.3-liter V-6 range-extending engine switches on to generate electricity that powers the 300-kilowatt (400-horsepower) electric motor driving the rear wheels. Total range is as much as 400 miles.

The liquid-cooled battery packs, slung between the truck's frame rails where a driveshaft would normally sit, contain 24 kilowatt-hours of energy, about the same as that pack in a Nissan Leaf electric car. They are also designed to provide power takeoffs to recharge power tools, for auxiliary lighting, and in other uses on job sites.

Via says it will sell up to 20,000 converted trucks per year, not only Silverado pickups but also Chevy Tahoe full-size sport-utility vehicles and Express vans. 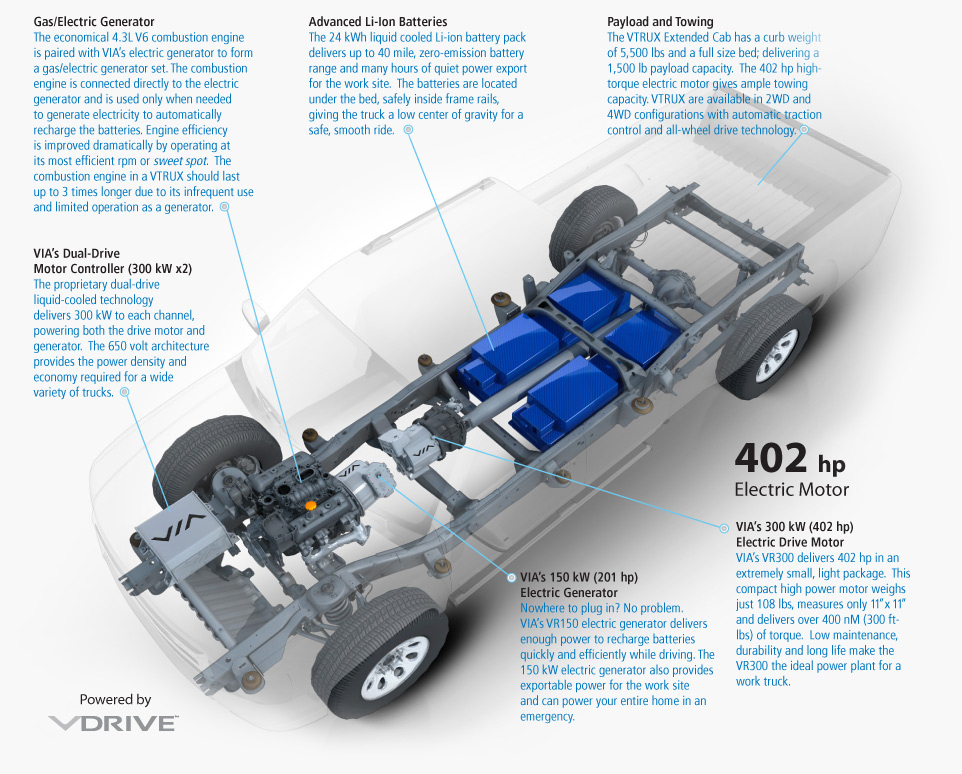 The battery packs are being built in Livonia, Michigan, where A123 [NSDQ:AONE] has opened an assembly plant. The company also plans to increase U.S.-based production of its lithium-ion cells, presently made mostly in China.

Pack assembly has already started, as Via says it has delivered its first trucks to commercial customers.

Analysts say that commercial trucks and vans may provide a substantial market for electric and range-extended electric technology, since fleet buyers look only at total cost of ownership (unlike less rational retail car buyers, who typically overweight initial purchase price).

The far lower cost-per-mile of running on electricity versus gasoline or diesel fuel often gives an electric-drive commercial vehicle a noticeable payback over its many years of life, even if its initial cost is substantially higher. Via's website quotes a projected selling price of $79,000 if sufficient orders are received.

“We think that commercial and government fleets represent a tremendous opportunity for vehicle electrification," said A123 vice president Jason Forcier. "We look forward to working with VIA Motors to design eREV trucks, vans and SUVs that meet fleet customers’ specific range and operational requirements.”