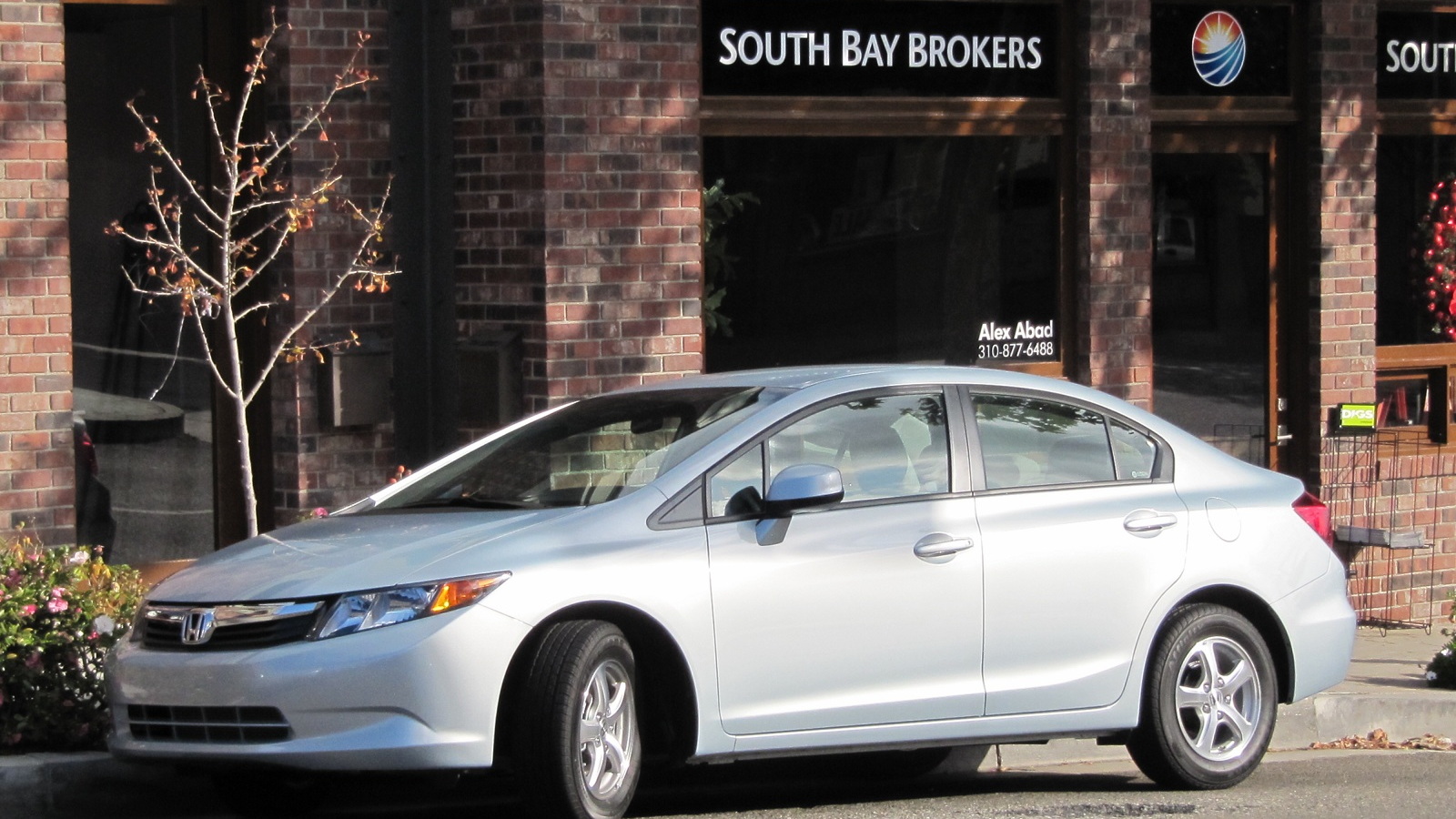 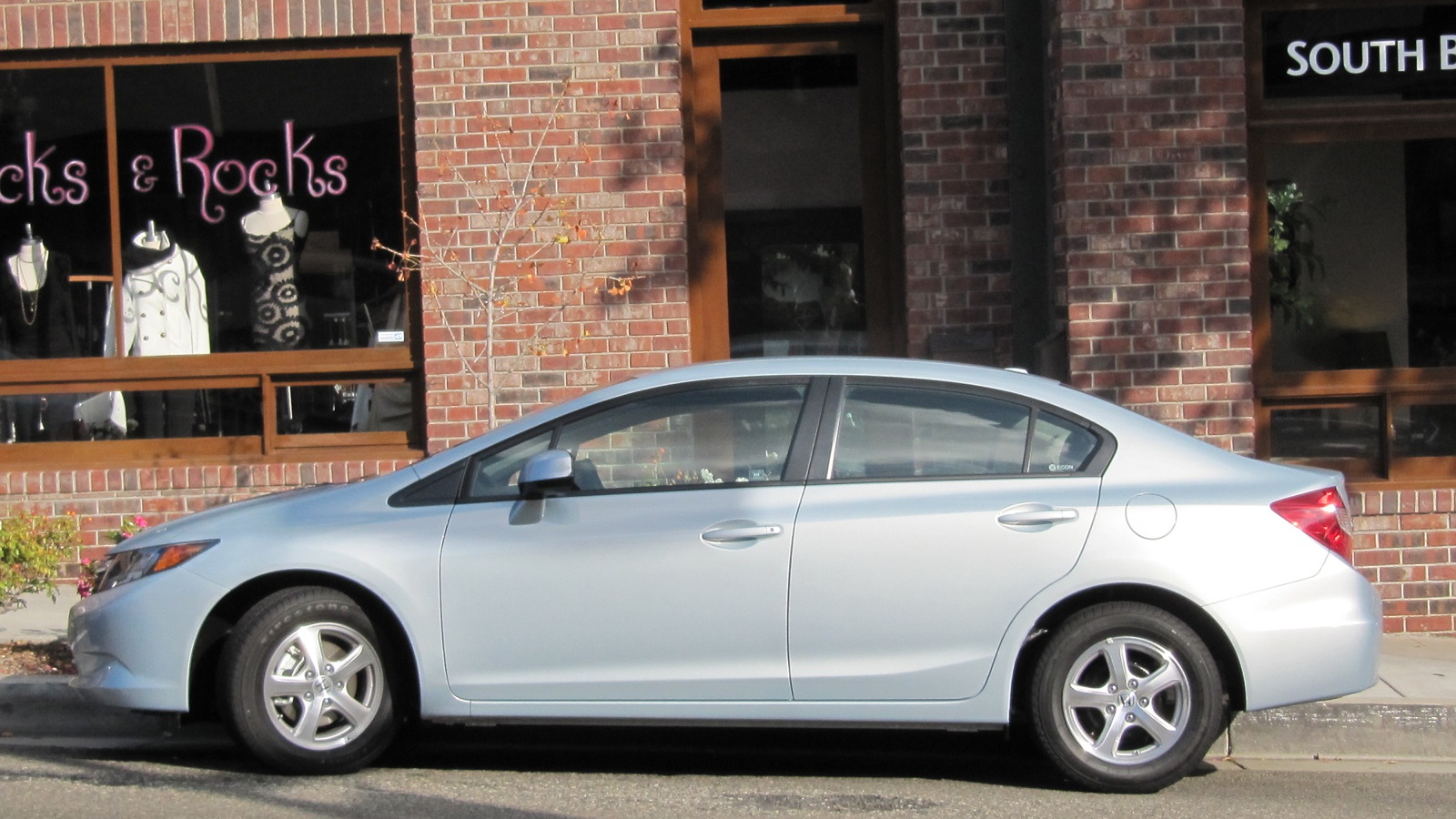 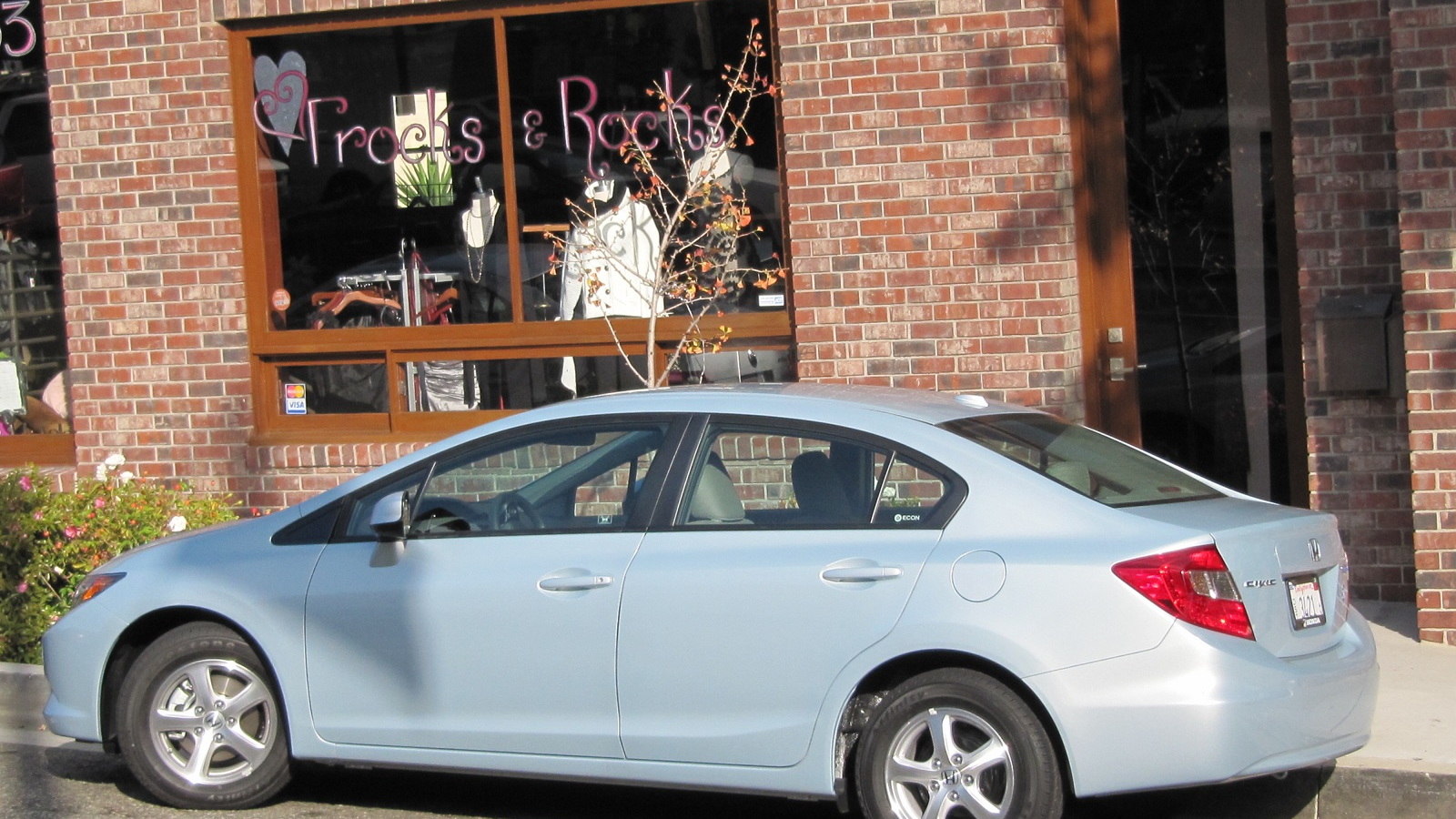 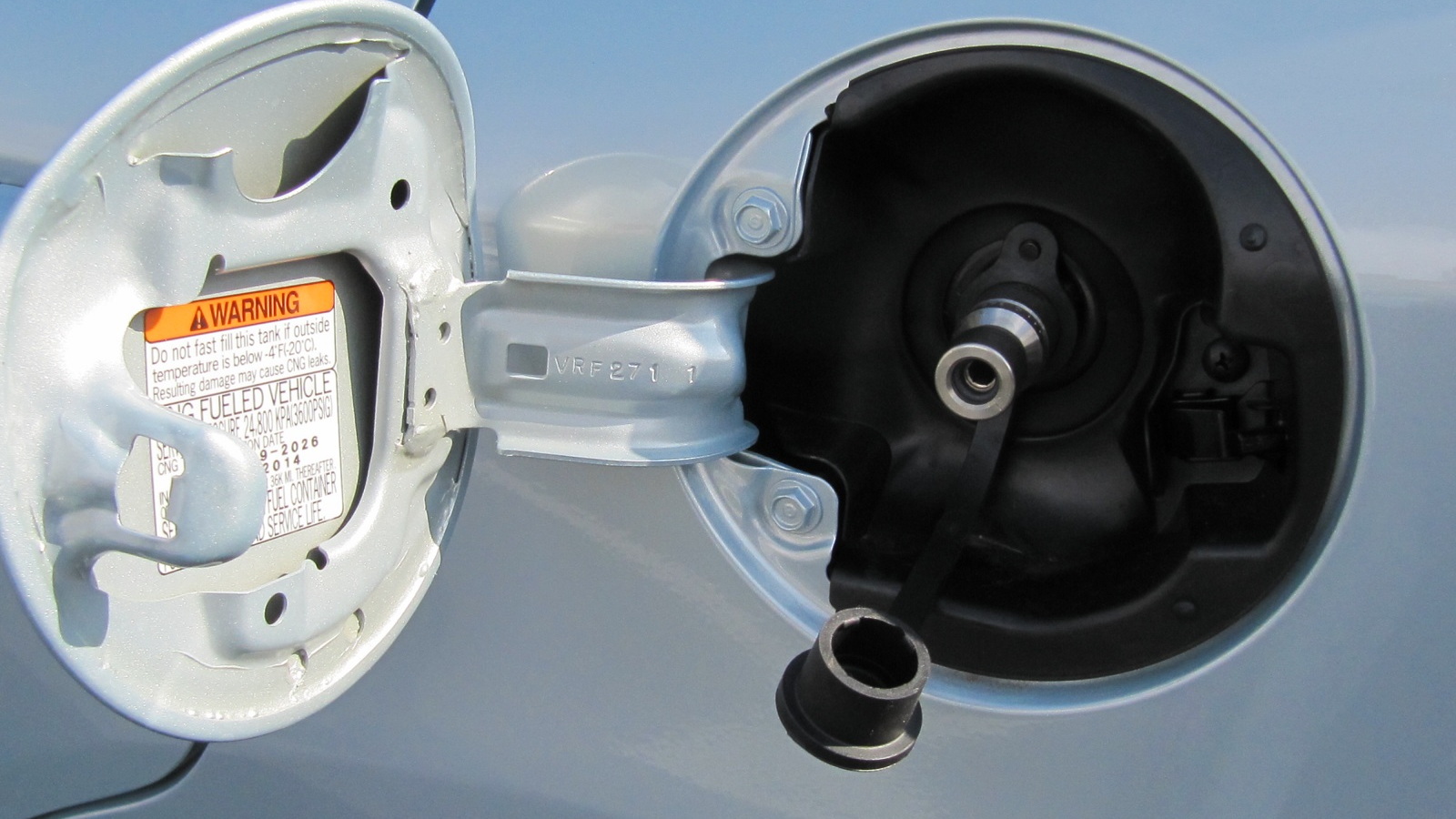 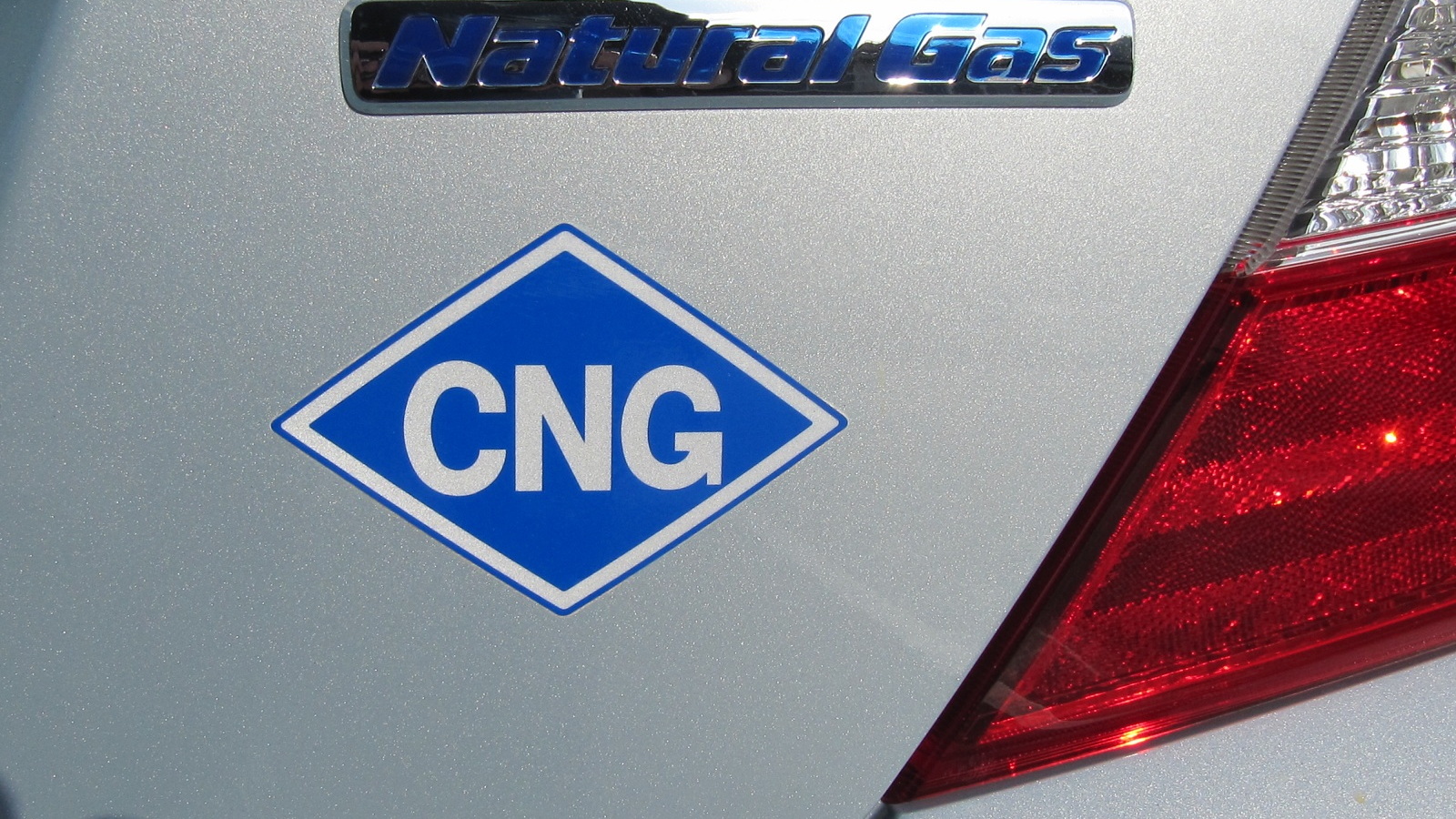 Honda has been the only carmaker to offer a natural-gas powered passenger car, and they've done it quietly in a handful of states for more than a decade.

But with the arrival of an all-new Civic this year, the company will make the 2012 Honda Civic Natural Gas available through selected dealers across much of the U.S.

During the Los Angeles Auto Show two weeks ago, we were able to test a brand-new model of the 2012 natural-gas powered Civic.

Our overall impressions were that it was very much a "regular" 2012 Honda Civic to live with, but with less power, a range of perhaps only 150 miles, a higher price, and two-thirds of the trunk space missing.

Offsetting that are much lower fuel costs per mile (they vary with the local cost of natural gas), some financial incentives, and in California, the all-important low-emission vehicle stickers that allow it into High-Occupancy Vehicle lanes with just a single occupant.

Its emissions of greenhouse gases, by the way, are 29 percent lower than those of an equivalent gasoline Civic.

We think the Civic Natural Gas makes sense for fleets and owners who will keep it long enough to see a payback, especially in those states with local and inexpensive supplies of natural gas.

But it's less practical as a cross-country car, since as of today, there are fewer than 1,000 public natural-gas fueling stations in the U.S. And with half or less the range of a conventional gasoline Civic, it requires more frequent refueling at those rarer stations.

In some ways, the 2012 Honda Civic Natural Gas is almost like a battery-electric car: much cheaper to run per mile, but pricier than the gasoline alternative, with range and refueling (or recharging) limitations.

Will natural-gas vehicles be as popular as electric cars (thus far) are proving to be? We're not sure about that, but we definitely see a place for cars like the Civic Natural Gas where the fuel is cheap and owners interested in either green driving or low overall cost of ownership are willing to put up with its drawbacks.

With the launch of the all-new 2012 Civic, Honda has added a second, higher-end model to its formerly basic natural-gas version (known through 2011 as the Civic GX). And for the first time ever, it's advertising a natural-gas vehicle as part of of the Civic range nationally.

The new model, which was the one we tested, adds a navigation system with voice recognition, as well as FM real-time traffic information. The system includes the location of natural-gas fueling stations, a feature not usually found in navigation software.

Our test car was so new that it had just 64 miles on it, and didn't yet sport the HOV lane stickers. We're not sure if its performance and range might improve slightly once it was broken in.

Options in the 2012 Civic range cover the gamut from the standard DX, LX, and EX models to the Civic HF model with higher highway mileage up through the 44-mpg Civic Hybrid, and all non-hybrid gasoline Civics are relatively peppy.

Not so the natural-gas Civic. Away from stoplights it was tolerable, but where hard acceleration was needed--merging onto uphill freeway ramps or for sudden lane changes--it was simply gutless. Not dangerously so, but enough where it simply wasn't that much fun to drive.

And somehow the lack of power was more noticeable in the new 2012 model than it was when we tested its predecessor, the previous Honda Civic GX.

The modified 1.8-liter four-cylinder engine of the Civic Natural Gas puts out 110 horsepower and 106 lb-ft of torque. The maximum power comes at a high 6300 rpm, but those figures compare to 140 hp and 128 lb-ft of torque for the standard 2012 Civic gasoline engine--so it has 21 percent less power and 17 percent lower torque.

Keeping up with traffic meant driving the Civic Natural Gas relatively hard, which revealed the second flaw: its remaining-range calculations proved too optimistic when the car was used at high speeds and under heavy acceleration.

We suspect the tank wasn't 100 percent full when we picked up the car. Honda says range has increased 10 percent, from 224 miles in the superseded Civic GX to 248 miles in the 2012 Civic Natural Gas. But we question its range assumptions.

Over five days, we covered 97 miles in and around Los Angeles. When we got the car, it had 146 miles listed as the range remaining. That number was a mere 16 miles at the end of our journey.

In other words, our 97 miles of driving had chewed through fully 130 miles of listed range. We would have had to refuel after covering just 100 miles if we weren't turning the car back in--little better than the electric 2012 Nissan Leaf, which is at least cheap to recharge.

In our drive report of the previous Civic GX, we noted that a natural-gas Civic owner we interviewed told us his real-world maximum range was 150 to 180 miles. Even adding 10 percent for the new model, that's 165 to 200 miles--at best.

Other pecularities: We noted window-sticker warnings that the engine may be harder to start--or not start at all--and the car should not be fast-filled (at public CNG fueling stations, presumably) if the outside temperature falls below -4 degrees F (-20 degrees C). That's not a problem in southern California, but could be in colder Northeastern markets.

And, of course, two-thirds of the trunk space was gone, with a carpeted vertical wall hiding the natural-gas tank sitting behind it.

Honda says it will have more than 200 dealers certified to sell the natural-gas Civic by the end of this year. It recommends that any dealer wanting to sell its NGV be located within 20 miles of a public natural-gas fueling station.