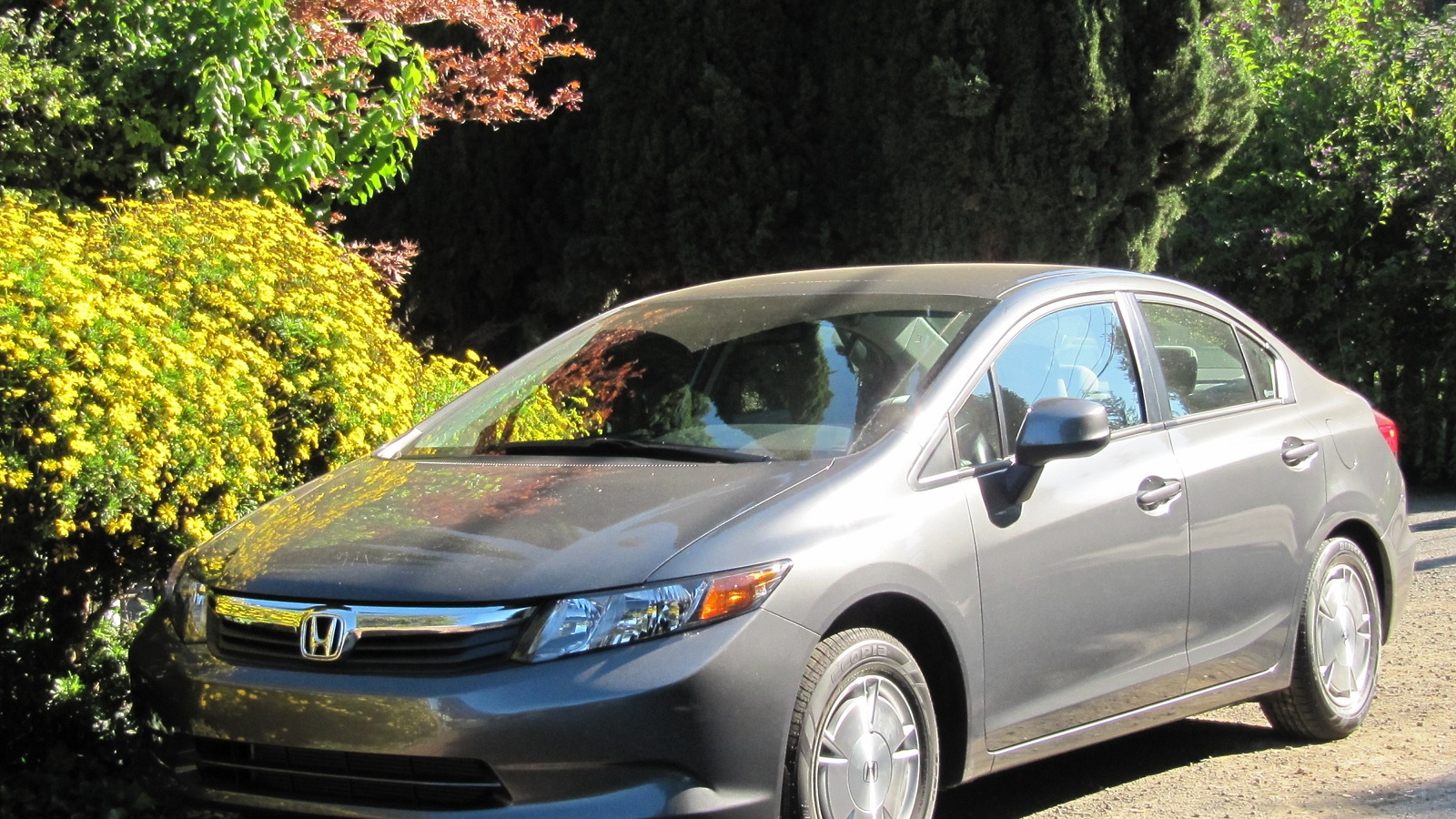 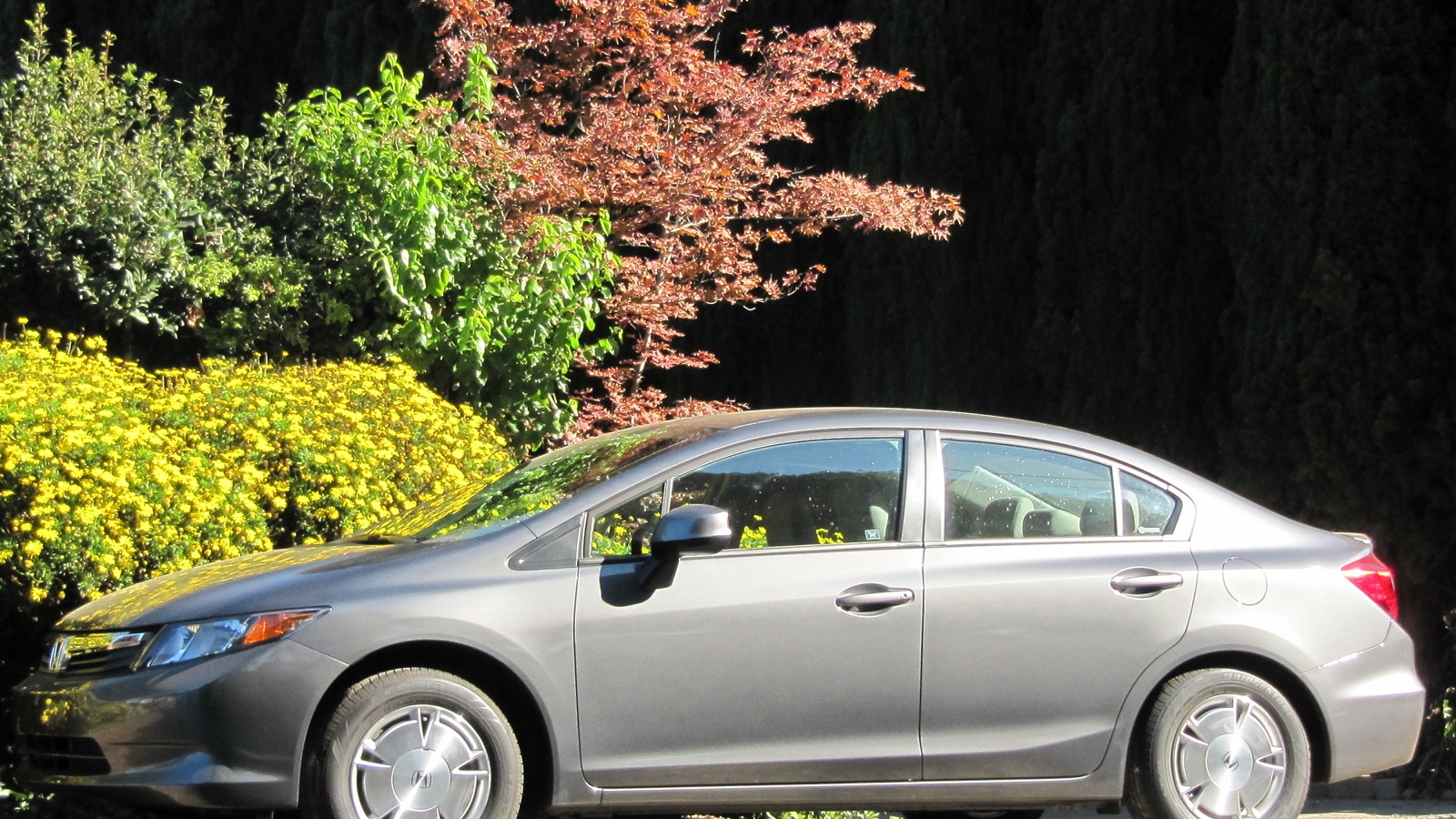 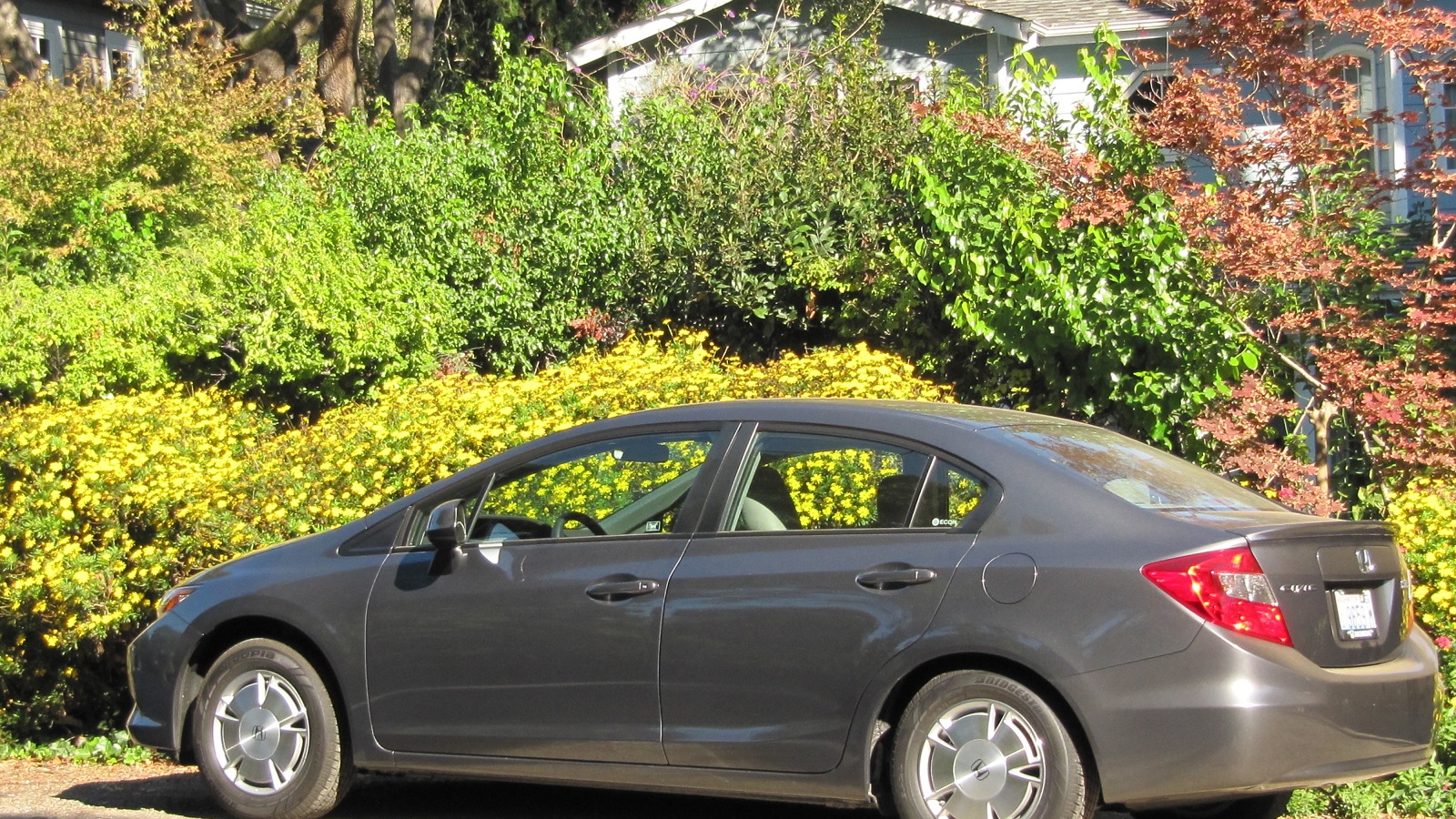 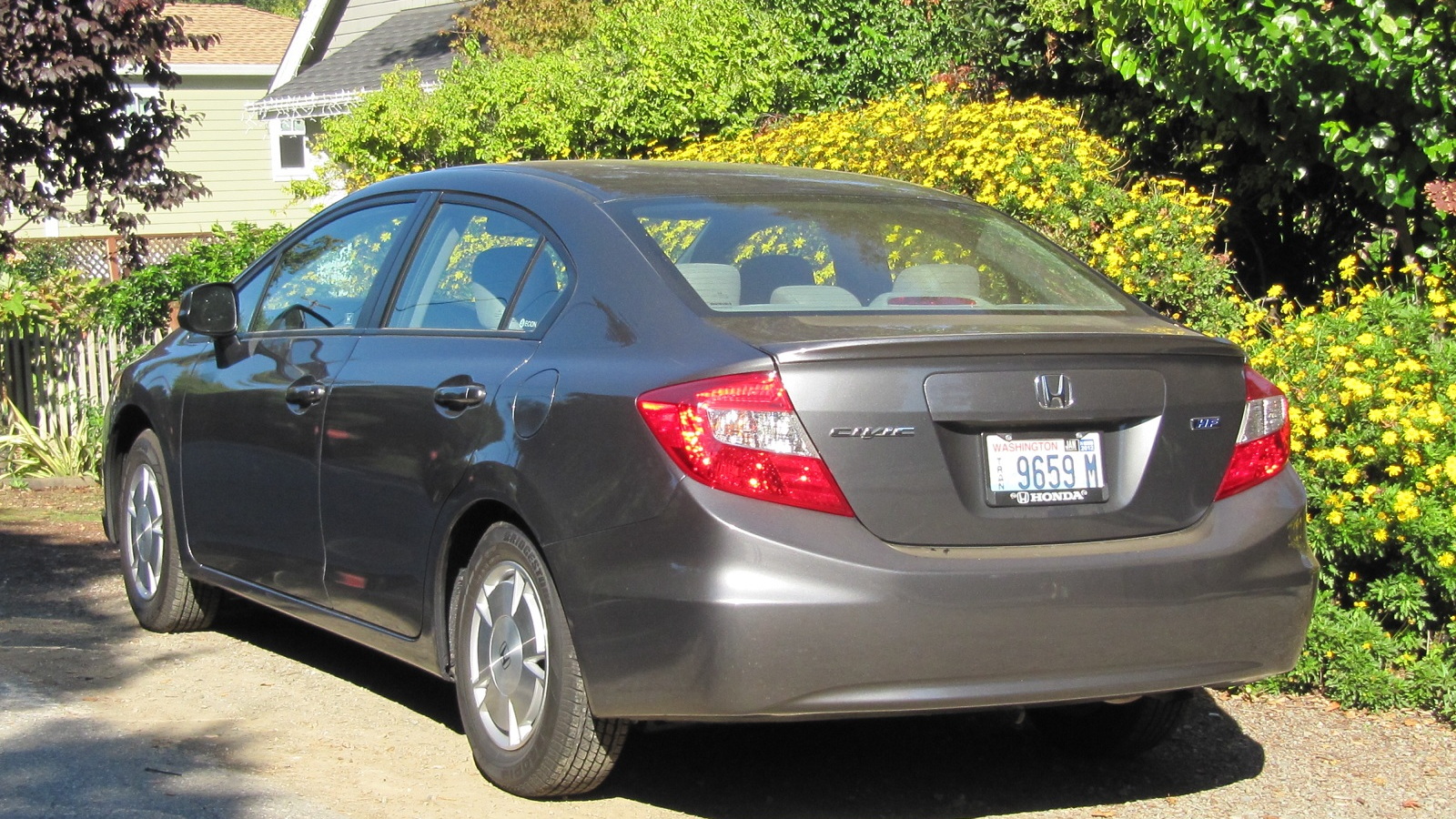 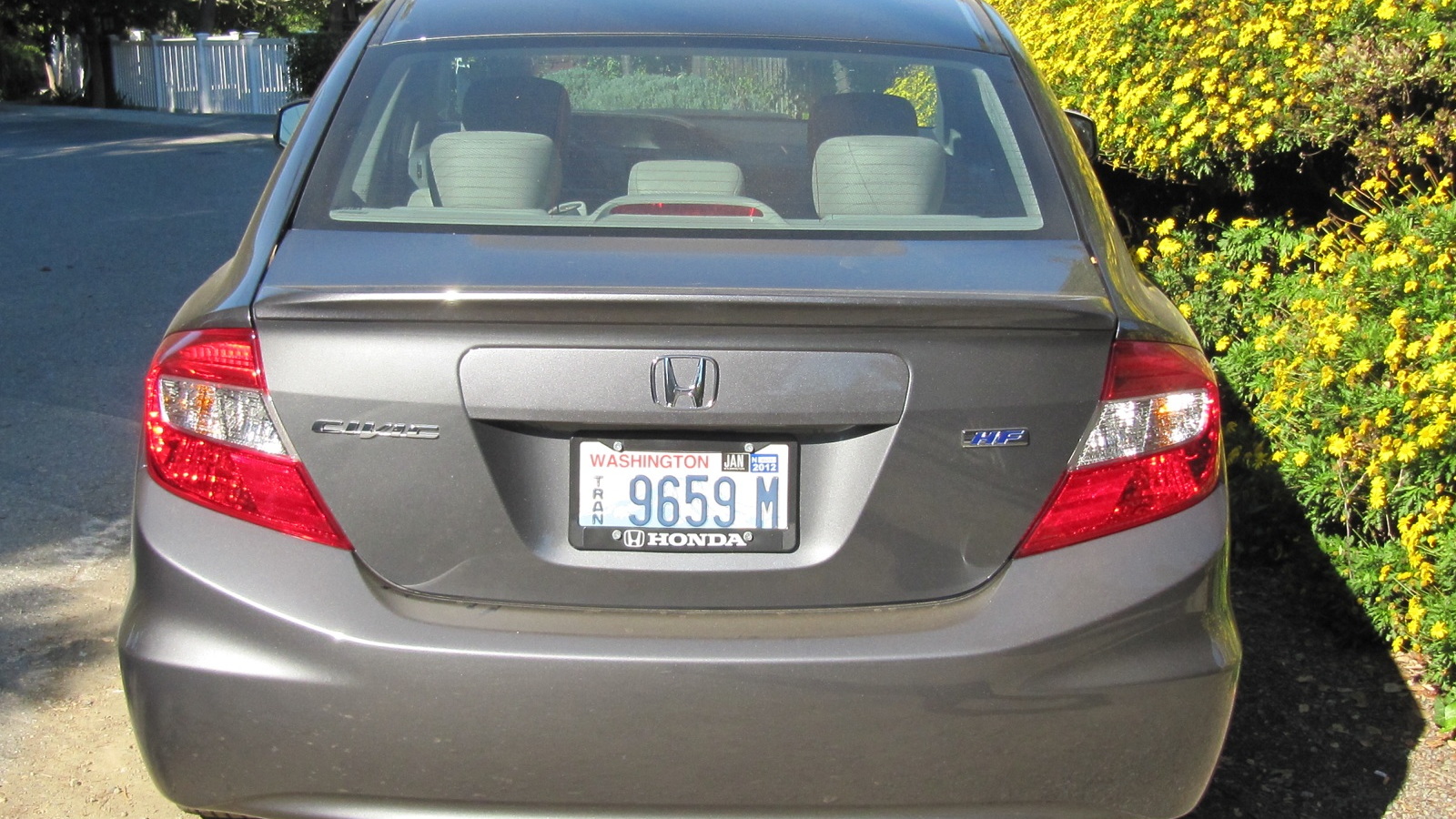 Five months ago, we drove the 2012 Honda Civic Hybrid--which gave us slightly more than 45 mpg using "Econ" mode. That's the best gas mileage of any Honda Civic in recent memory.

So we were eager to test the new-for-2012 Civic HF model, which forgoes the electric motor and lithium-ion battery pack of the Civic Hybrid.

Its standard 1.8-liter gasoline engine is paired with the aerodynamic tweaks (a new front fascia and decklid spoiler, among others) and low rolling resistances tires used on the Civic Hybrid, along with unique alloy wheels.

Those modifications boost its highway gas mileage against the standard gasoline 2012 Civic sedan.

Our usual drive route skews toward freeway mileage, but our test of the 2012 Honda Civic HF was equally split with one half being urban and suburban stop-and-go traffic, and the other half driven at speeds up to 75 mph on limited access freeways.

Over 118 miles, we registered overall gas mileage of 31.5 mpg--1.5 mpg lower than the EPA combined rating.

We suspect our lower-than-EPA mileage number reflects the specific nature of the Civic HF's modifications. Reducing aerodynamic drag only really comes into play at 40 mph and above, so they did less to help on the lower-speed stop-and-go part of our route.

We only used the "Eco" button (now fitted on all Civic sedan models) for a short period on the freeway. It certainly made the car less responsive, but was tolerable on flat roads.

Unlike our Civic Hybrid, the dark-grey Civic HF behaved perfectly normally in creeping traffic, with none of the occasional lurches and stumbles we experienced with Honda's IMA mild-hybrid system. The five-speed automatic worked just as expected.

The low rolling resistance tires, however, were notably less grippy around tight corners than the standard Civic's tires.

If you're not an aggressive driver, you might not notice that, but you might still be aware of the tire roar over certain road surfaces--especially since the 2012 Civic is probably only average in its class for sound deadening.

Once again, as on the Civic Hybrid, we found the handling good and the seats comfortable.

But our Civic HF test car was considerably lower down in the model range than the top-of-the-line Civic Hybrid we tested--meaning it had cloth seats, no navigation system, and fewer amenities. We particularly missed a USB port, for instance.

In that light, although the interior uses multiple shades of grey to break up its large expanses of plastic, the interior feel bordered on grim. Many reviewers have commented on the cheap-looking hard plastics and harsh interior surfaces, and the Civic HF certainly did nothing to convince us otherwise.

Everything worked fine, but compared to the newest of the competition--the Ford Focus, Hyundai Elantra, and Chevy Cruze--the 2012 Civic just isn't that nice a place to spend time. It's reminiscent of the aged Toyota Corolla, which is distressing for a car that's brand-new for 2012.

Overall, the Civic HF is a decent choice that we think will return its best gas mileage if used for long stretches of highway mileage. Otherwise, it's not all that different from the regular 2012 Civic.

Is the extra mileage worth it? We're skeptical.