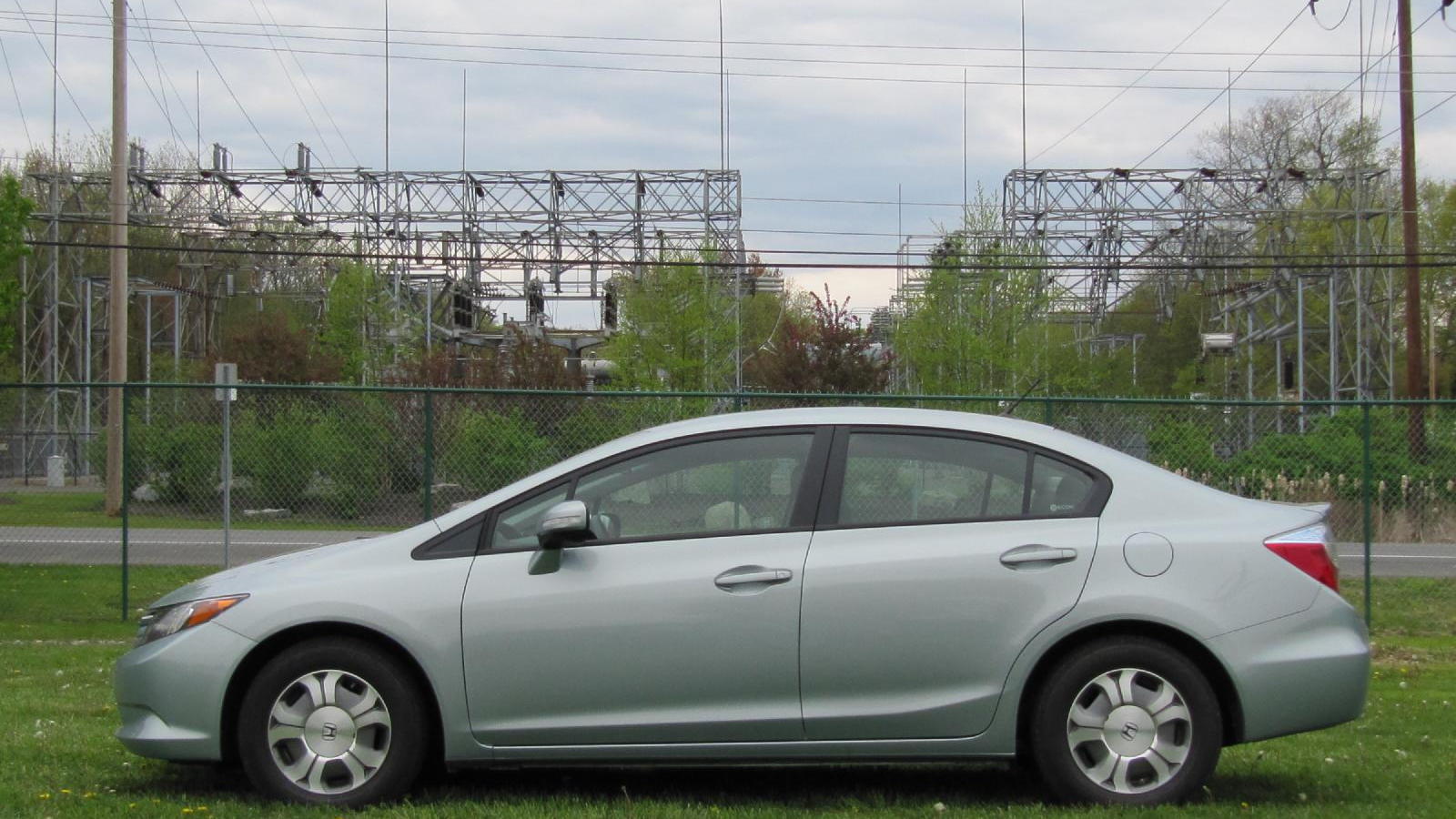 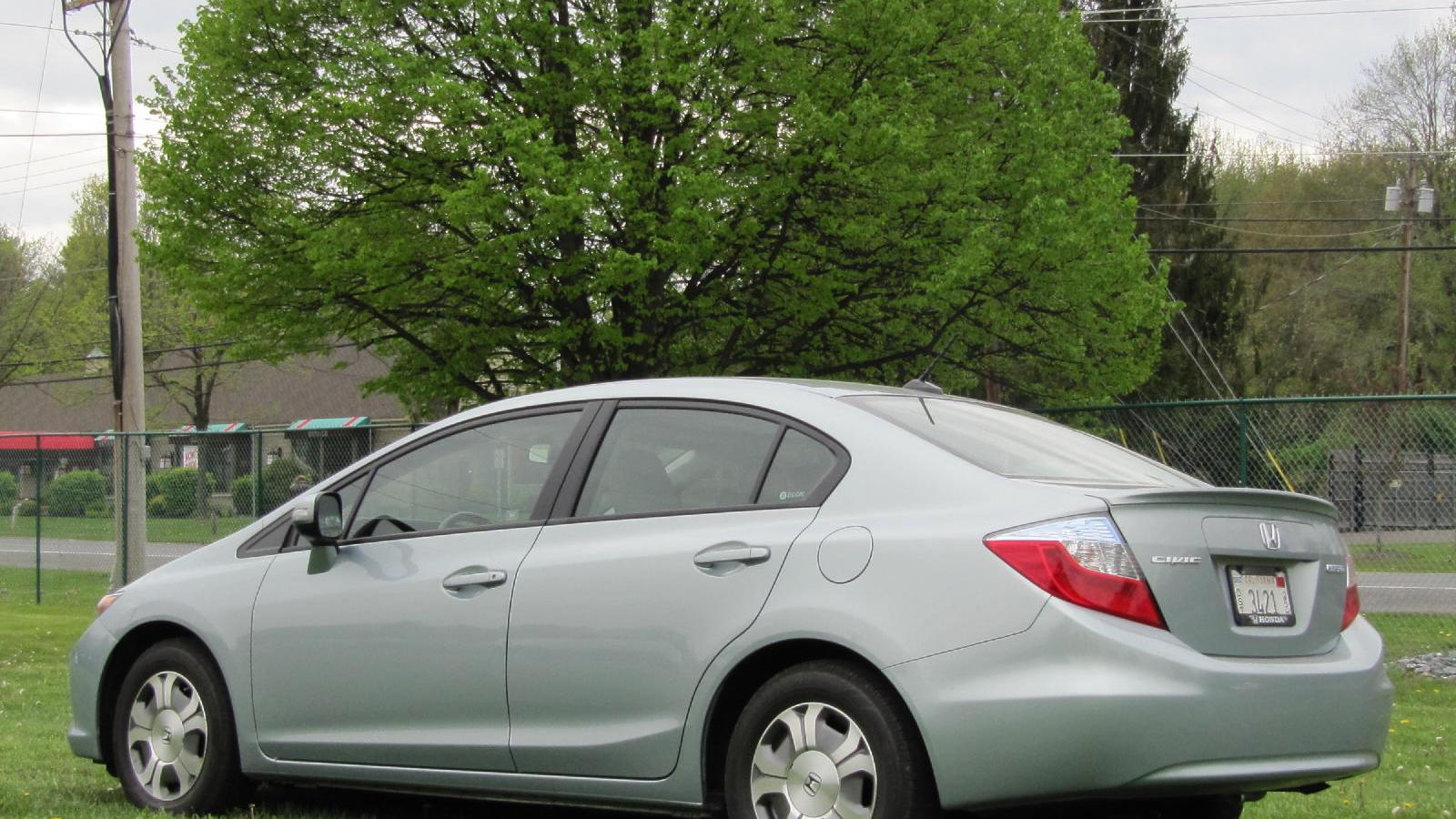 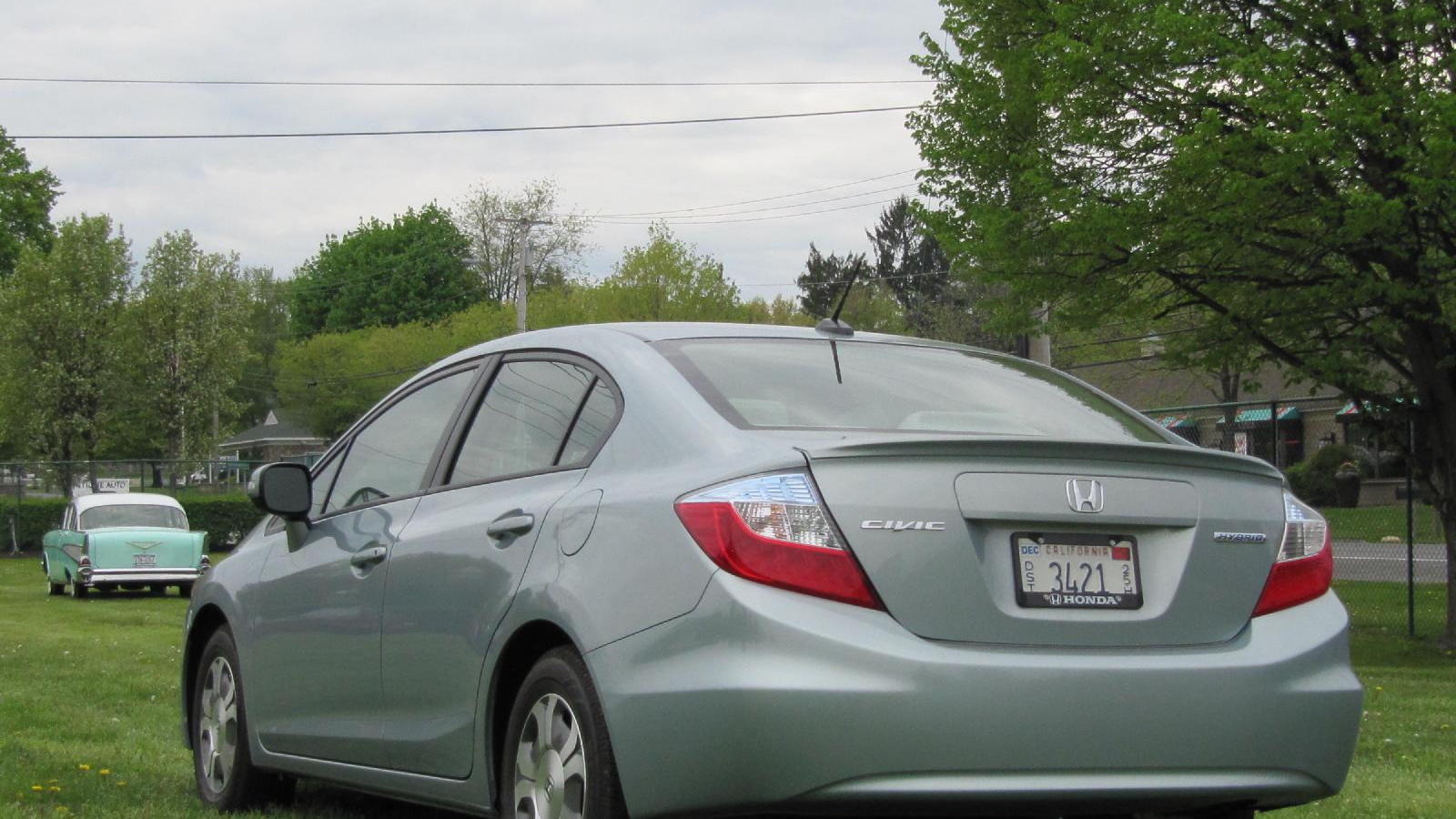 The 2012 Honda Civic range, launched at last month's New York Auto Show, includes two models devoted to wringing out as many miles as possible from every last drop of gasoline.

The one with the highest gas mileage is the 2012 Civic Hybrid, rated by the EPA at 44 mpg on all three test cycles: city, highway, and combined.

We spent an hour with the new Civic Hybrid at an April press preview, and wrote a brief review when the Civic range was formally introduced to the world.

Now, we've had the opportunity to spend three days and almost 400 miles in a 2012 Honda Civic Hybrid, and can provide you with a proper drive report.

First things first: How did it do on mileage?

Over 394 miles, we recorded interim readings consistently between 42 and 44 mpg. But with a final spurt of freeway driving (often using the cruise control) to get back home, we registered an overall mileage of 45.3 mpg.

Two things to bear in mind: First, we left the car almost entirely in "Econ" mode. We figured that if we were going to stretch our gasoline as much as possible, we had to take advantage of the car's built-in ultra-economy mode.

In Econ mode, by the way, the car lost significant speed on uphill stretches--which were the only time we reverted to regular mode, just to keep up with traffic.

Those differences may be less important in the Civic Hybrid, given its identical city and highway ratings, but for most cars, duty cycle matters.

It's also worth commenting that our little Honda registered a remaining travel distance of 131 miles, meaning well over 500 miles per tank of gasoline. On long trips, your bladder will give out long before your gasoline does.

The restyled 2012 Honda Civic is far from the design leap that its 2006 predecessor represented. The front two-thirds of the car are recognizably Honda Civic, with taillights that vaguely echo those on the larger midsize Honda Accord.

And aside from slight differences in the wheels and the front fascia, plus a small spoiler on the trunk lid, you'd have to read the badges to know that this 2012 Civic was a hybrid. It's the antithesis of the Toyota Prius identity, and virtually invisible as such.

The motor does fundamentally three things: It restarts the engine after it's stopped when the car comes to a halt; it adds electric torque to the engine output; and it regenerates electricity under braking, charging the lithium-ion battery pack.

Mild hybrid (with an asterisk)

Like all of Honda's hybrids since 1999, the 2012 Civic Hybrid is a "mild hybrid," meaning it can't move the car on electric power alone.

With the latest generation, there's now an asterisk to that statement: Under certain circumstances, the electric motor alone will move the car when it's at constant speed on level roads under light acceleration.

We observed this happening several times, for up to 30 seconds at a time, at speeds between 20 and 38 mph.

But the engine doesn't switch off when this happens; it continues to rotate, even though the fuel supply has been cut off, so it's using no gasoline.

This is also the first-ever Honda hybrid fitted with a more compact lithium-ion battery pack. It takes only about 6 or 8 inches out of the trunk depth, unlike some full hybrids, whose trunks are significantly compromised.

Because the Civic Hybrid has to restart its engine to move away from a dead stop, it's not as smooth to drive as a Prius-style full hybrid.

We learned to anticipate imminent green lights, lifting our foot off the brake enough to restart the engine to avoid the second or so of lag before the car surged away once its engine had fired and transmission had engaged.

In creeping traffic, drivers have to rely on the car's ability to continue rolling forward at up to 6 mph once the engine has switched off.

But with the constant stops and starts--and no ability to accelerate, even at low speeds, solely on electric power--the 2012 Honda Civic Hybrid isn't particularly pleasant to drive in heavy traffic.

By chance, we ended up with the same car for our weekend review that we'd driven at the media event. Again we felt some powertrain surging and stumbling, with inconsistent brake feel as the car came to a stop and perceptible lurching as the engine turned off.

In fairness, our car was a very early prototype--so early, in fact, that it had no Vehicle Identification Number (VIN) tag visible through the windshield. But we very much hope Honda plans to fine-tune its control software to alleviate these symptoms.

They detract significantly from the driving experience, and seemed--at least to the best of our memory--notably worse than in the last-generation 2009 Civic Hybrid we drove two years ago.

As always, the Civic handling is close to the top of its class, bettered only by the sportier (and much lower volume) Mazda3.

The Civic Hybrid is fun to chuck around corners, and it's easy to place on corners. It always goes exactly where it's pointed under a variety of driving circumstances.

Less pleasant on the road is the high level of wind noise. This is an area where compact cars have made great strides lately, none more so than the remarkably hushed 2011 Chevy Cruze, which may be best-in-class for interior quiet.

The Civic Hybrid uses low-rolling-resistance tires, which may contribute more road noise than the softer, more compliant rubber on other models. But the Civic Hybrid required us to raise our voices slightly at speed on some types of pavement, meaning it's far from a class leader there.

We found the 2012 Civic seats to be comfortable over long distances. They came with well-placed side bolsters and a good range of adjustment--done manually in the hybrid, as usual on fuel-economy models.

In previous comments on the car, we've criticized the hard plastic interiors and an ugly seam that joins two pieces on top of the dashboard. They look cheap, although at least its matte surfaces avoid the ultra-shiny piano black finish that's already a cliche.

But by the end of our four days with the car, we'd gotten used to the dash appearance, though we'd still prefer softer-touch plastics.

Some of the minor controls weren't up to par, with rocker switches for temperature and fan speed that are notably inferior to larger rotary knobs found in other compacts--and not easy to read at a glance, either.

Our passenger, in fact, commented that the entire climate-control setup looked at first glance like nothing so much as the face-plate of a 1980s cassette deck.

But the interior was missing some of the amenities found in other compacts: bottle-holders in front and rear door pockets, a rubber mat to prevent mobile phones from sliding on the flat tray ahead of the shift lever, and a rear-seat power outlet.

We do give Honda credit for providing auto-up as well as auto-down on the driver's door. We consider it a safety feature, and it's one of our major irritations in compact-class cost-cutting when it's missing.

While the iPod integration on the 2012 Civic was intuitive and easy to use, the USB port wouldn't charge unknown devices like the Blackberry we connected. The Bluetooth paired easily and read in directory data quickly.

The navigation system was also intuitive, with good resolution in its smallish screen. And the high-end stereo system produced crisp, clean sound on both the high and low ends of the range.

Hybrid is one high-end Honda

Our Civic Hybrid came with leather seats, a navigation system and XM satellite radio, and several other features that cost extra on most non-hybrid models.

As the Union of Concerned Scientists has pointed out, hybrids are usually fitted with high-end features as standard, making it difficult or impossible to get one that's on the lower end of its model range.

Overall, we found the 2012 Honda Civic Hybrid to deliver on its promise of the highest everyday gas mileage in the range.

It had all the traditional Civic virtues: predictable handling, excellent roadholding, and good infotainment features and dashboard infographics.

But the hybrid system wasn't as smooth in operation as we would have liked, especially with a plethora of new full hybrid models entering the market that can move away from a stop on electric power alone.

As well, the 2012 Civic's interior materials and amenities are now only average in the newly competitive compact sedan class. And its price is steep. While our early car came without a window sticker, we estimate it would run upwards of $25,500.

For that money, you can get a lower-level 2011 Toyota Prius, a midsize five-door hatchback that's a full hybrid and rated by the EPA at 50 mpg combined.

So it's up to you: What balance will you strike among gas mileage, features, and purchase price? Honda has several alternatives in the new Civic line, and most likely, one of them would hit the right mix for you.