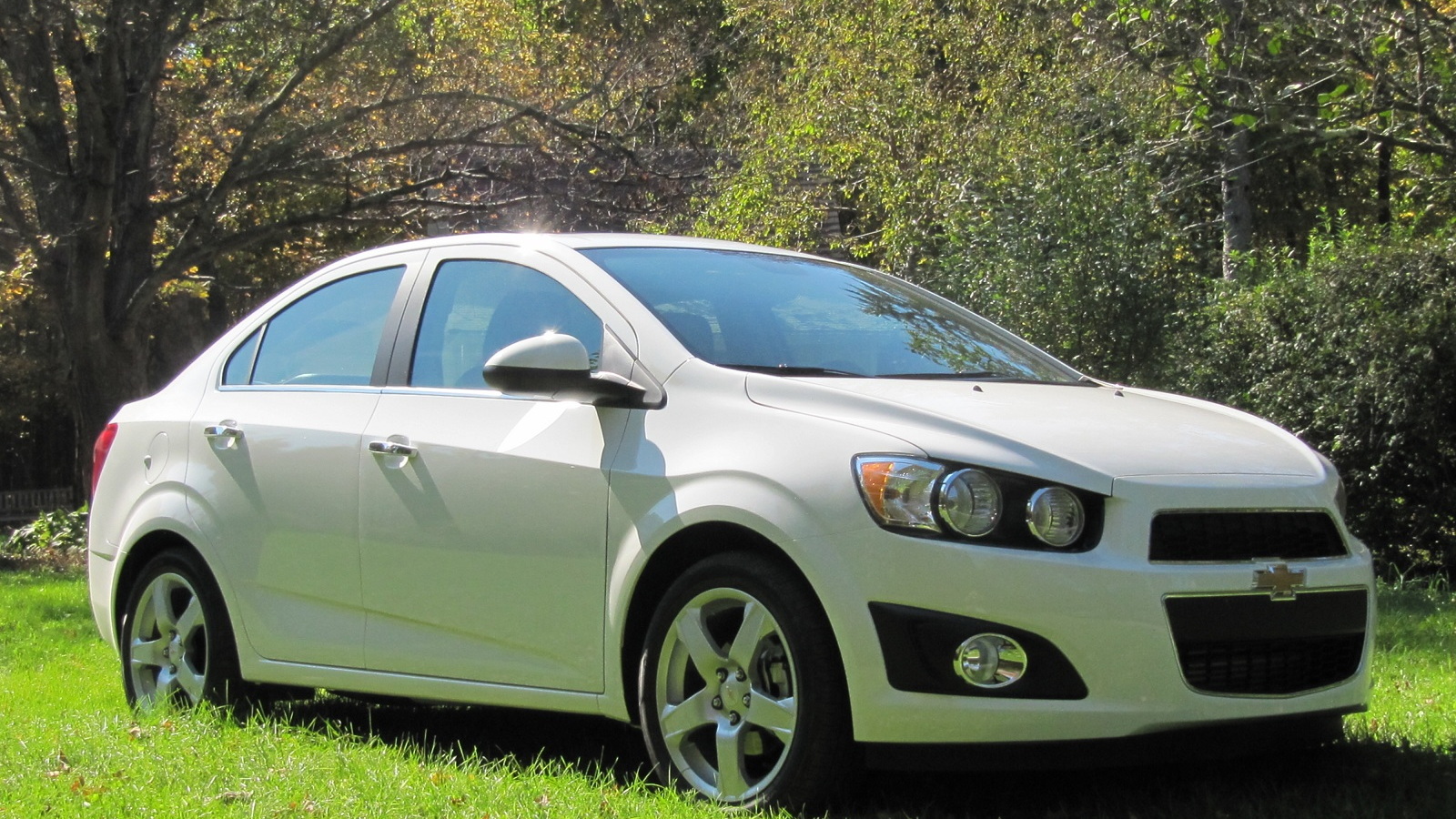 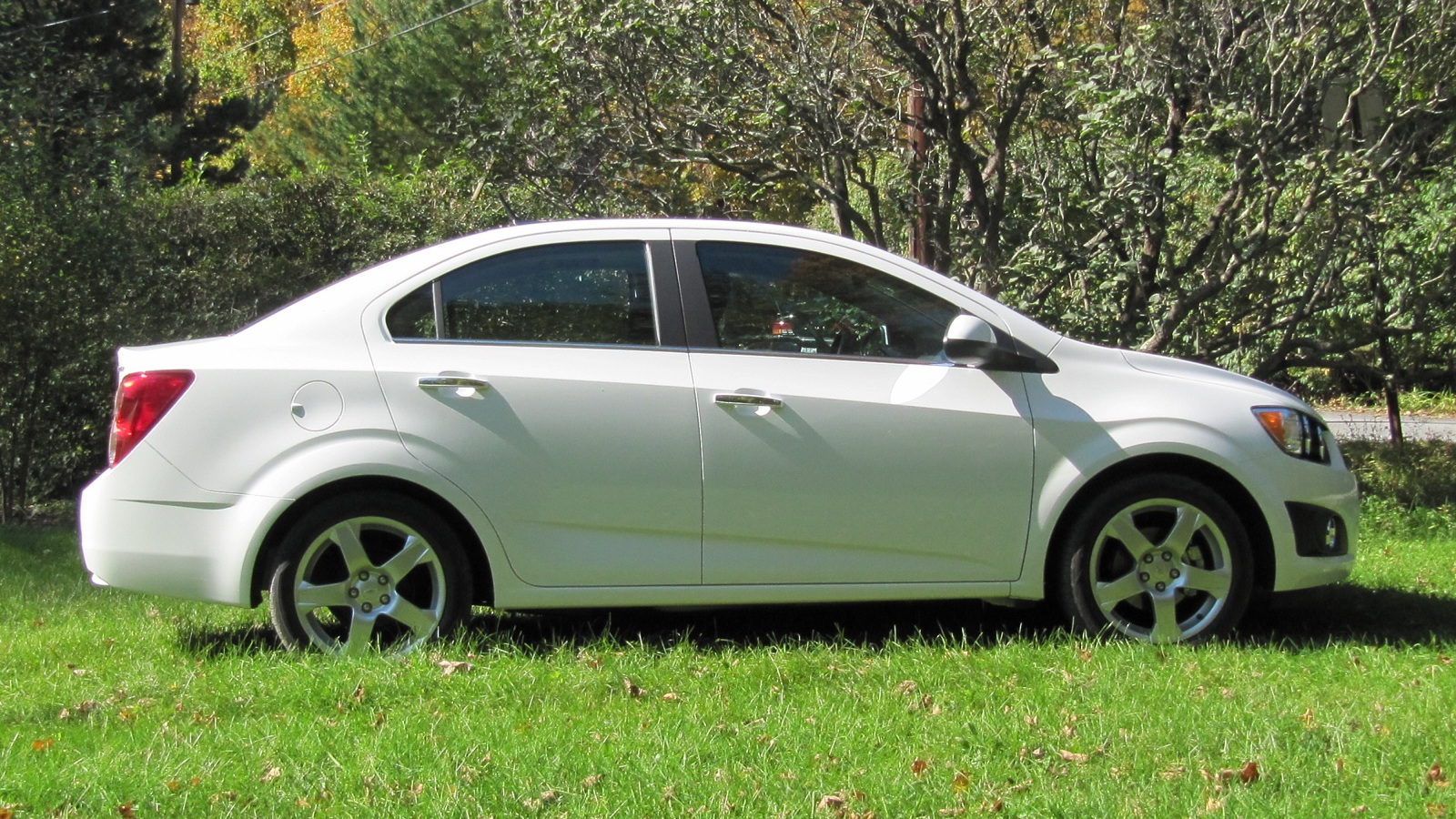 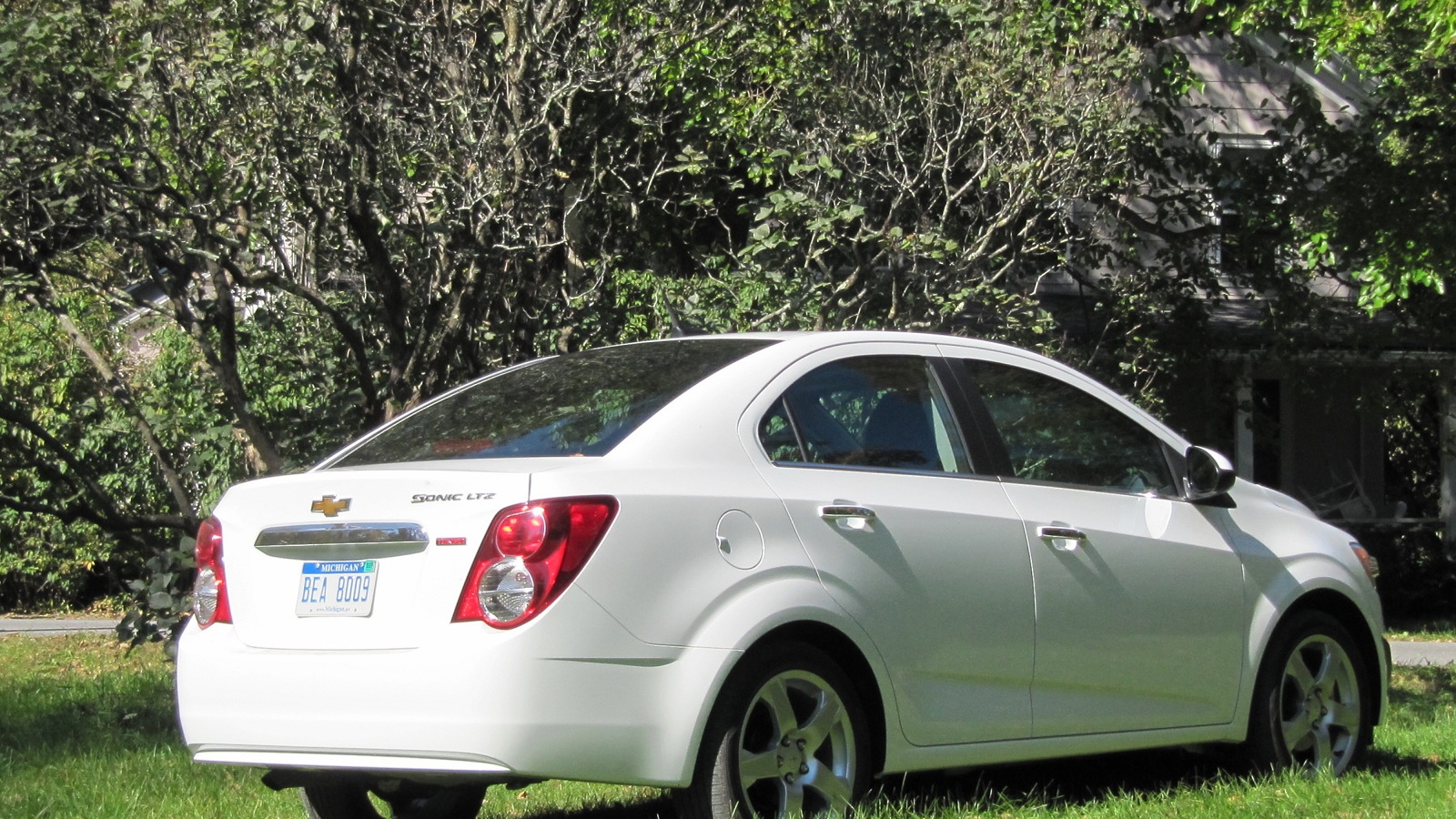 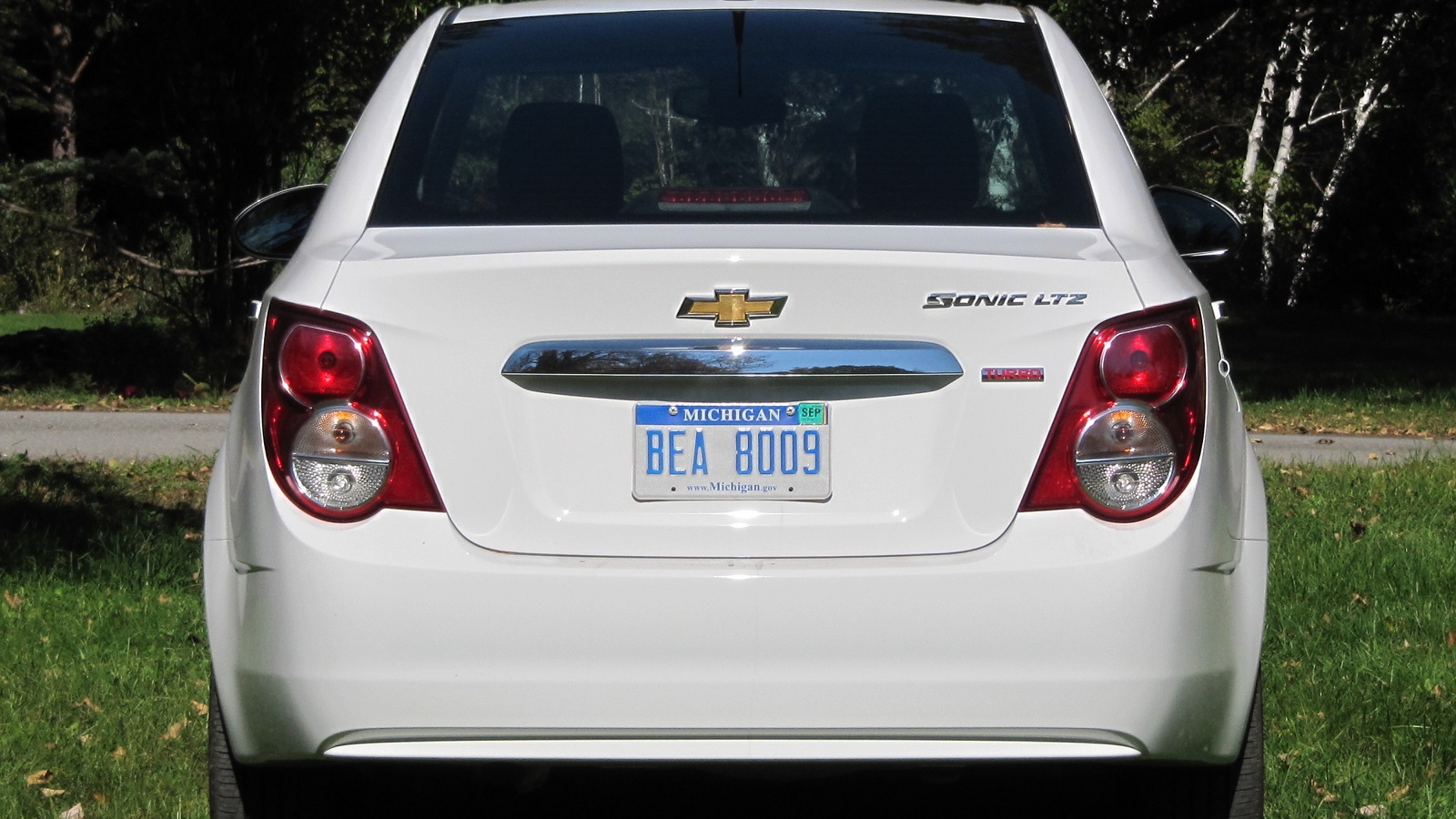 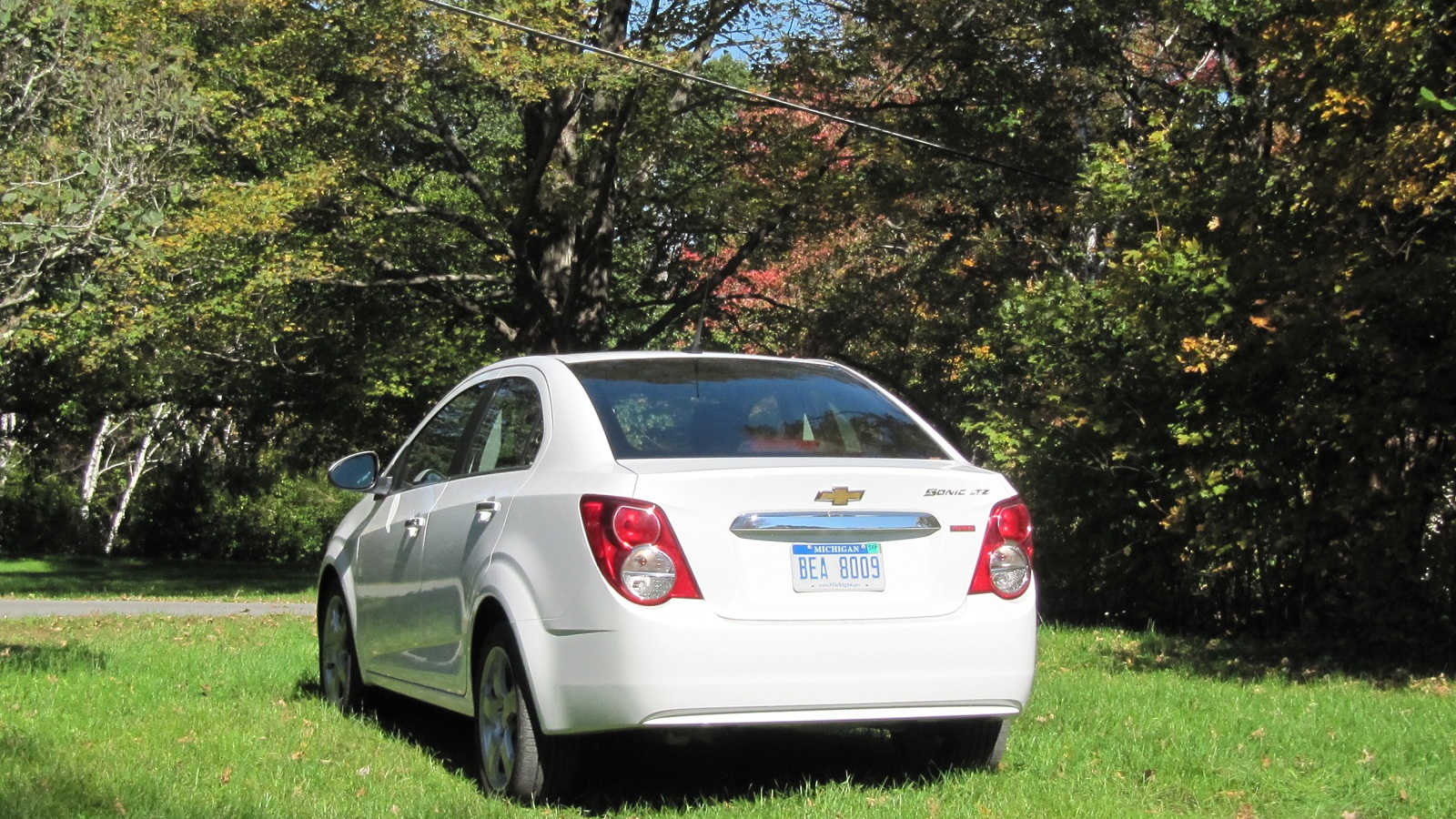 "Bracket creep" is the phenomenon where each successive generation of a car gets slightly bigger. It's what allowed the Honda Civic to evolve from the 1973 model, which today we'd call a minicar, to the compact it is today.

The  2012 Chevrolet Sonic, deemed a subcompact by GM, is a prime example of bracket creep. Fifteen or 20 years ago, it would have been considered a compact. At 173 inches long, it's exactly as the length of a 1995 Honda Civic. And like the 2012 Hyundai Accent it competes against, it's large enough to carry four adults comfortably.

So does the new Sonic, which replaces the late and unlamented Chevy Aveo, make a good compact ... err, subcompact car?

Absolutely. The high-level sedan model we tested was fun to drive, filled with features, and got decent gas mileage.

And its larger size leaves room for the even smaller 2013 Chevrolet Spark minicar just announced two days ago.

The 2012 Chevrolet Sonic has a more aggressive version of the Chevrolet twin-grille "face" than most other models. The projector headlamps are exposed, rather than hidden behind glass, which the company calls "motorcycle derived" styling.

Both the four-door sedan and the five-door hatchback are tall, rather slab-sided vehicles, but accent lines go some way toward hiding that.

All models have chrome trim on the front door handles (the rears are hidden in the roofline), body-color mirrors and bumpers, and alloy wheels--even the base model forgoes steel wheels. These are nice touches that give all Sonic models an upscale look.

To our eyes, the best looking model is the hatchback in LTZ trim, which includes the largest 17-inch alloy wheels Chevy offers.

One thing we noticed: The car attracts attention from people on the street and other drivers. Our white Sonic sedan was the antithesis of flashy, but several other drivers turned to look at the car as we passed or as they passed us.

Inside the 2012 Sonic, there's a simplified version of the Chevy twin-cockpit look. The tiny instrument cluster is simply a tachometer plus a rectangular digital display that includes all other driver info.

But we found it surprisingly usable, along with the large eyeball vents at the edges of the dash, which are effective and easy to adjust without taking eyes off the road.

The digital display sits between two horizontal rows of round holes that prove to contain the various warning lights, although you won't know that until you start the Sonic up.

Another reviewer called them Detroit-derived bullet holes, but we think the tiny molded plastic cluster housing looks like some obscure kitchen implement.

One big question for us was whether the 2012 Sonic would actually deliver the kind of gas mileage you'd expect from a fairly small car.

Over our 250-mile weekend road test, we got 34.2 miles per gallon. That's slightly better than the 33-mpg combined EPA average for the 1.4-liter Sonic with six-speed manual. That model is rated at 29 mpg city, 40 mpg highway.

But it's exactly equal to the 34 mpg we got in the 2011 Chevrolet Cruze Eco we tested in March, which is a larger, better equipped, and quieter vehicle.

We suspect the two Chevies will appeal to different audiences--and that's what Chevrolet marketer Matt Scarlett said the company predicts. The 2012 Sonic is for first-time and younger car buyers, he suggested, whereas the Cruze skews slightly older and more family-oriented.

Only 30 percent of buyers will be "conquests" from other brands, Scarlett said. Main competitors are the Honda Fit and the Ford Fiesta, along with the new 2012 Hyundai Accent.

For similarly equipped models (roughly), the Sonic is also about $3,000 cheaper than the Cruze. So the Sonic gives you the same gas mileage, and is a smaller car that's more fun to drive, for less money.

As for the fun-to-drive part, the 138-horsepower, turbocharged 1.4-liter engine in the Sonic gave us a nice thrust once it reached about 2500 rpm. The Sonic isn't all that quick off the line, but if you keep engine speeds between 2500 and 5000 rpm, the boost stays on and the little car hustles right along.

The six-speed manual gearbox is smooth and predictable, and unlike some other recent test cars, we never once wrong-shifted (hitting the 3-4 gate instead of the 5-6, for instance). A six-speed automatic transmission will be an option

Drivers quickly learn where the slight exhaust rasp comes in, making the subcompact feel even more sporty. There's also an occasional little gurgle sound at low revs, which gives the Sonic a bit of personality.

The downside of the low engine speeds is that passing requires downshifting not one but two gears, from sixth to four, to get enough boost for quick acceleration past traffic. It all works fine, but it will be a new trick for some drivers to learn.

Handling is decent, with predictable slight understeer when pushed, though the electric power steering remains sadly feedback-free. That's a problem GM cars seem to share with Toyota, which has some of the worst electric steering on the market.

Quiet and large inside

Like the larger Cruze, the 2012 Chevy Sonic is one of the quieter cars in its class. It's not as hushed on the highway as the compact Cruze, but it's pleasantly quiet--the two most intrusive sounds were wind noise around the mirrors and substantial tire roar on certain surfaces.

The front seats are comfortable and fit everyone, and even a 6'2" adult man fit into the rear seat once he'd negotiated a bit of front-seat travel with the driver. The top of his head, however, was half an inch below the rear window glass, which extends high into the roof--a clever touch that adds headroom, since the roof's internal structure and headliner subtract an inch of headroom just in front of his forehead.

In the driver's seat, we greatly missed a right-elbow rest. Even on top trim levels, the Sonic has no center compartment.

The dashboard is a model of simplicity, with three large rotary knobs for the ventilation system, two for the sound system, and lots of storage space. We particularly liked the pair of mobile-device compartments either side of the center stack, complete with rubber mats to prevent phones from moving around.

The iPod connector is in the upper glovebox; there are actually two, along with a pair of cupholders, door bins, and a tray ahead of the shift lever. The 2012 Sonic, in fact, is one of the very few new cars where we had space for everything we carry--sunglasses, two mobile phones, change and bills for tolls, and a bottle of soda. Well done, Chevy.

The sedan's heavily-raked rear window conceals an astoundingly large trunk. We appreciate that Chevy has provided an external trunk release, and an electric pressure switch at that. (Some makers have deleted any form of button, lock, or handle from the trunk lid entirely--hello, Hyundai--an economy feature we deeply dislike.)

It has already been designated a Top Safety Pick for crash safety by the Insurance Institute for Highway Safety (IIHS), and Chevy confidently expects it to earn top ratings on crash tests by the National Highway Traffic Safety Administration (NHTSA).

Visibility out the back side and rear window of the Sonic was good. While it has the predictability high tail, the rear parcel shelf in front of the window is not kicked up as it is in some other sedans, so a driver can actually see out the right rear side for lane changes. We removed the rear-seat headrests for better rear visibility, as we always do when traveling solo.

Windup windows on base LS

Chevy says it's taken great pains to include enough equipment even in the base Sonic to keep it from looking and feeling like the dreaded "econobox" of old, including those standard alloy wheels (the LS's are 15-inch painted aluminum, the LT has 15- and 16-inch wheels, and the LTZ has 17-inch alloy wheels).

The door windows continue to work for a period even after the Sonic is switched off, and the driver's window has auto-up as well as auto-down.

All Sonics, including the base LS model (at $14,635), come with air conditioning, power locks, Onstar with six months free, a hill-hold feature, and keyless entry.

Our LTZ model adds a connectivity package with Bluetooth pairing for mobile phones and music, a USB port, and audio and phone controls on the steering wheel. It also adds cruise control, heated front seats, and fog lamps.