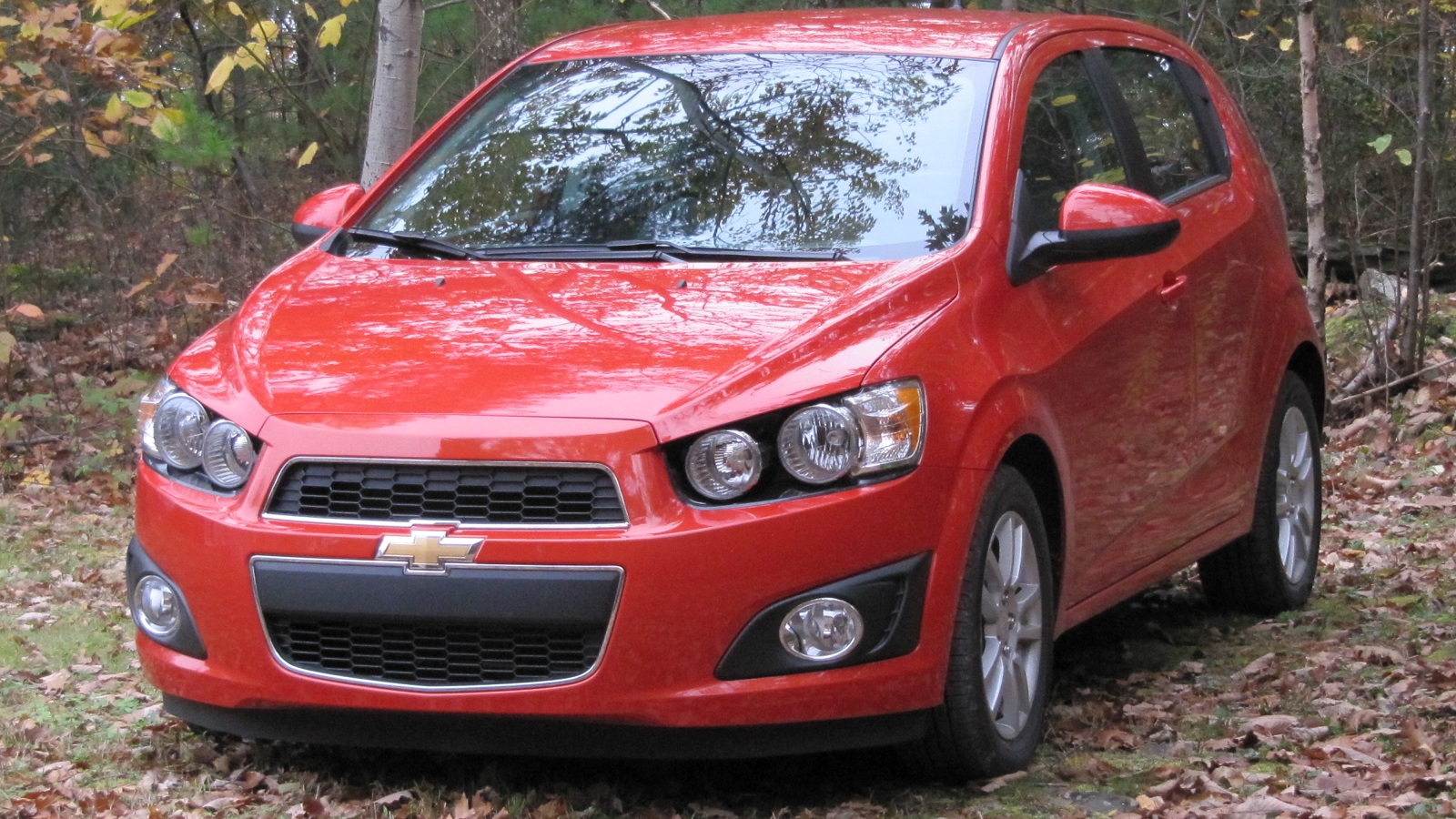 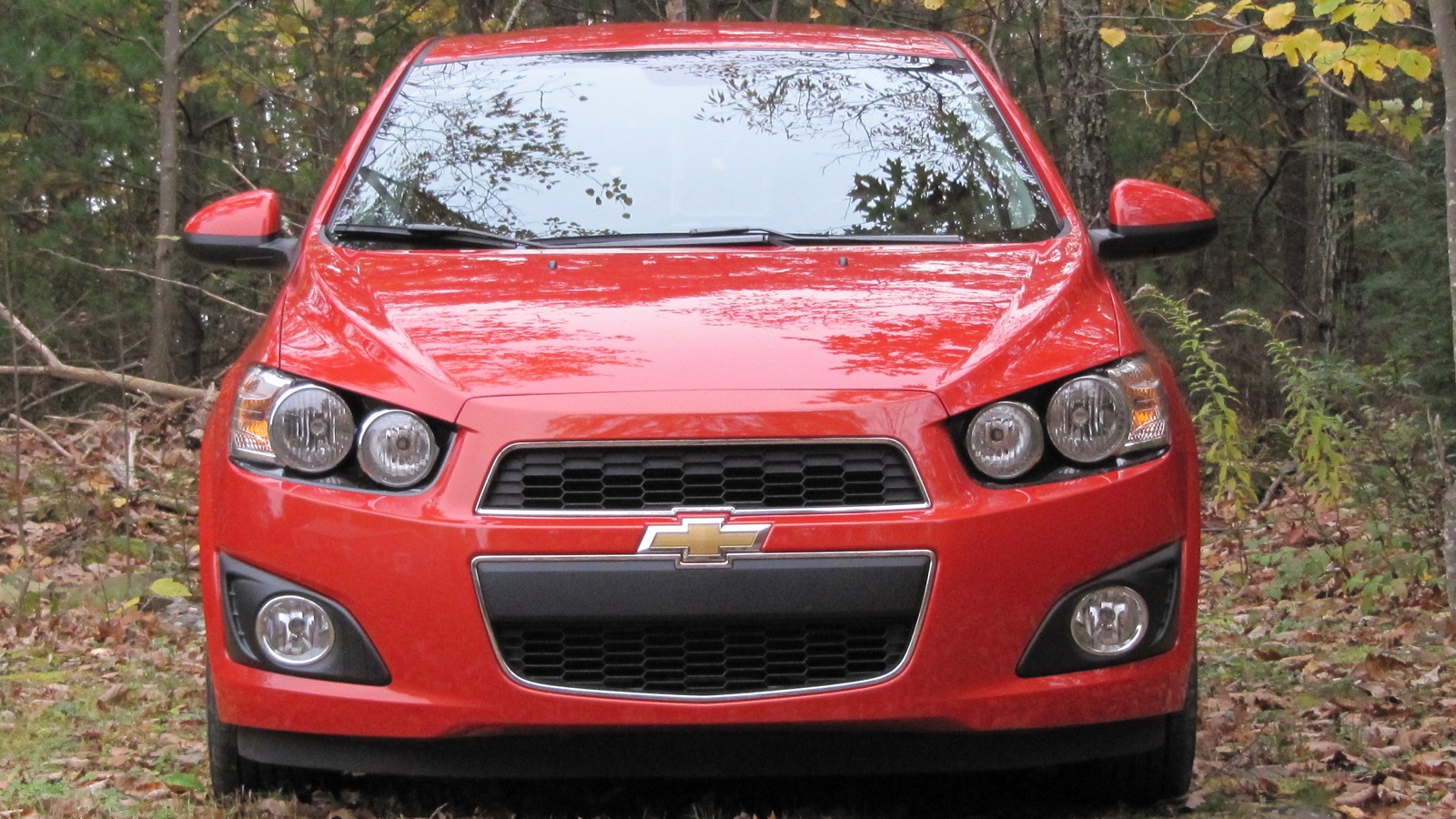 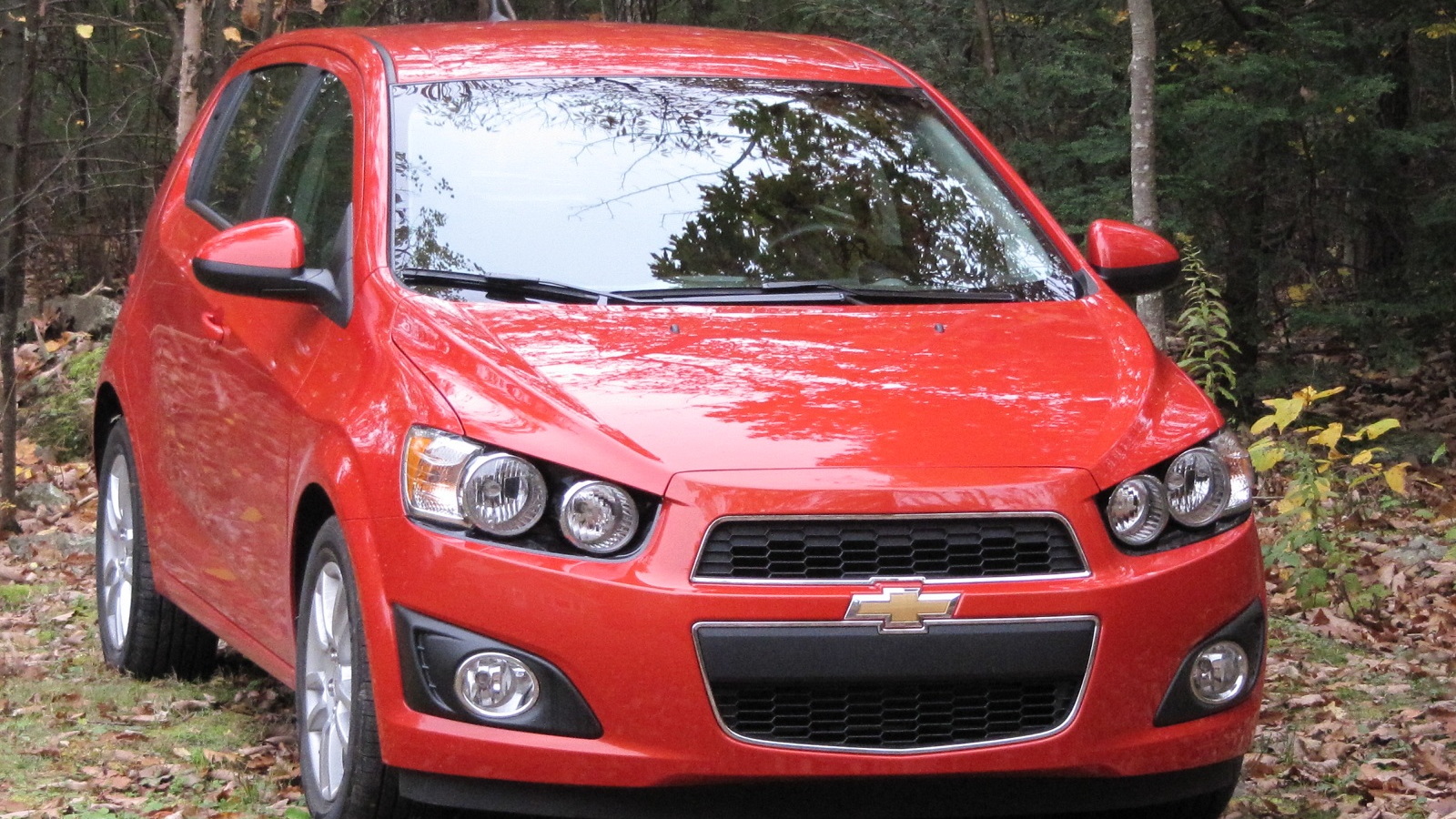 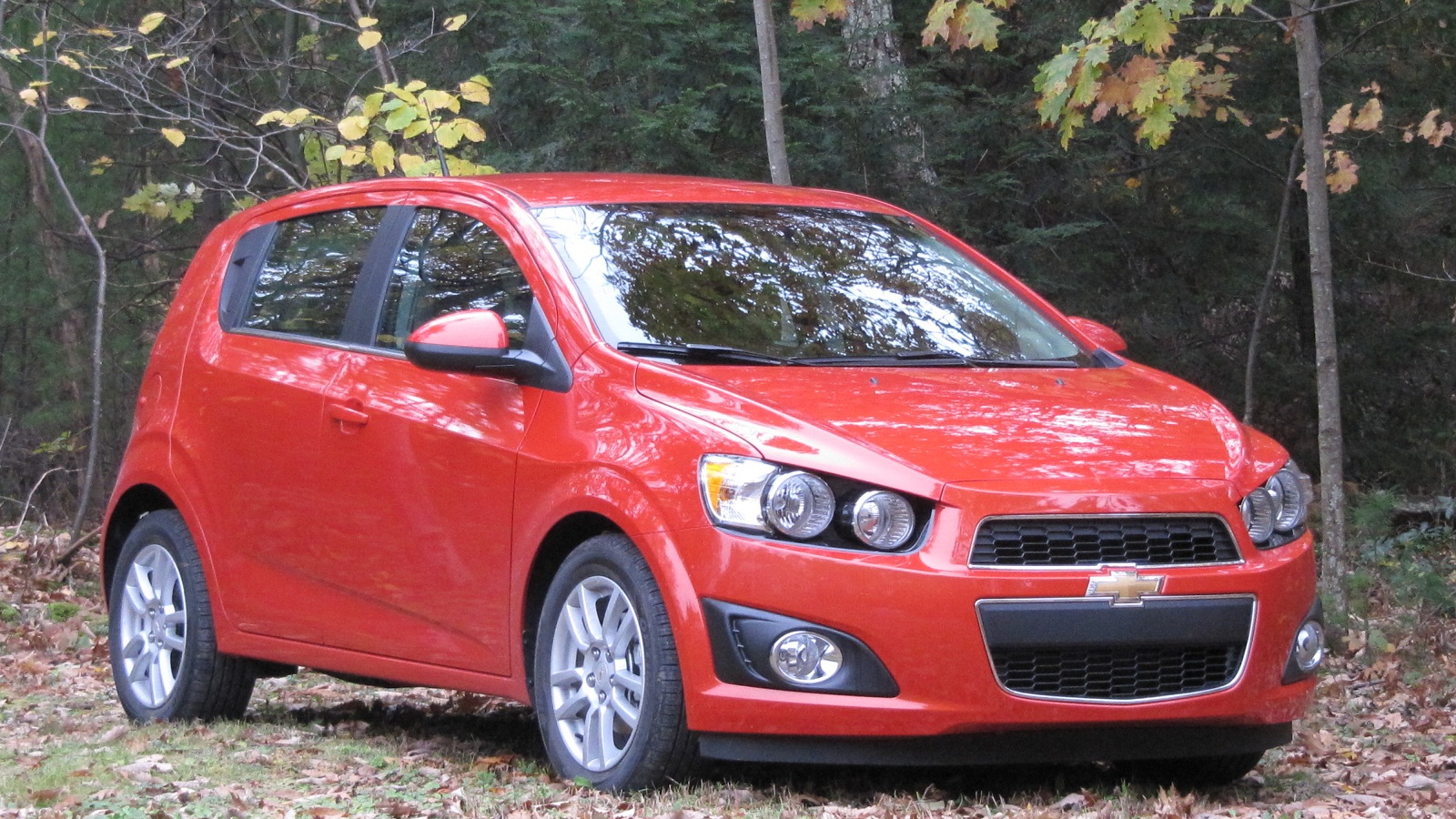 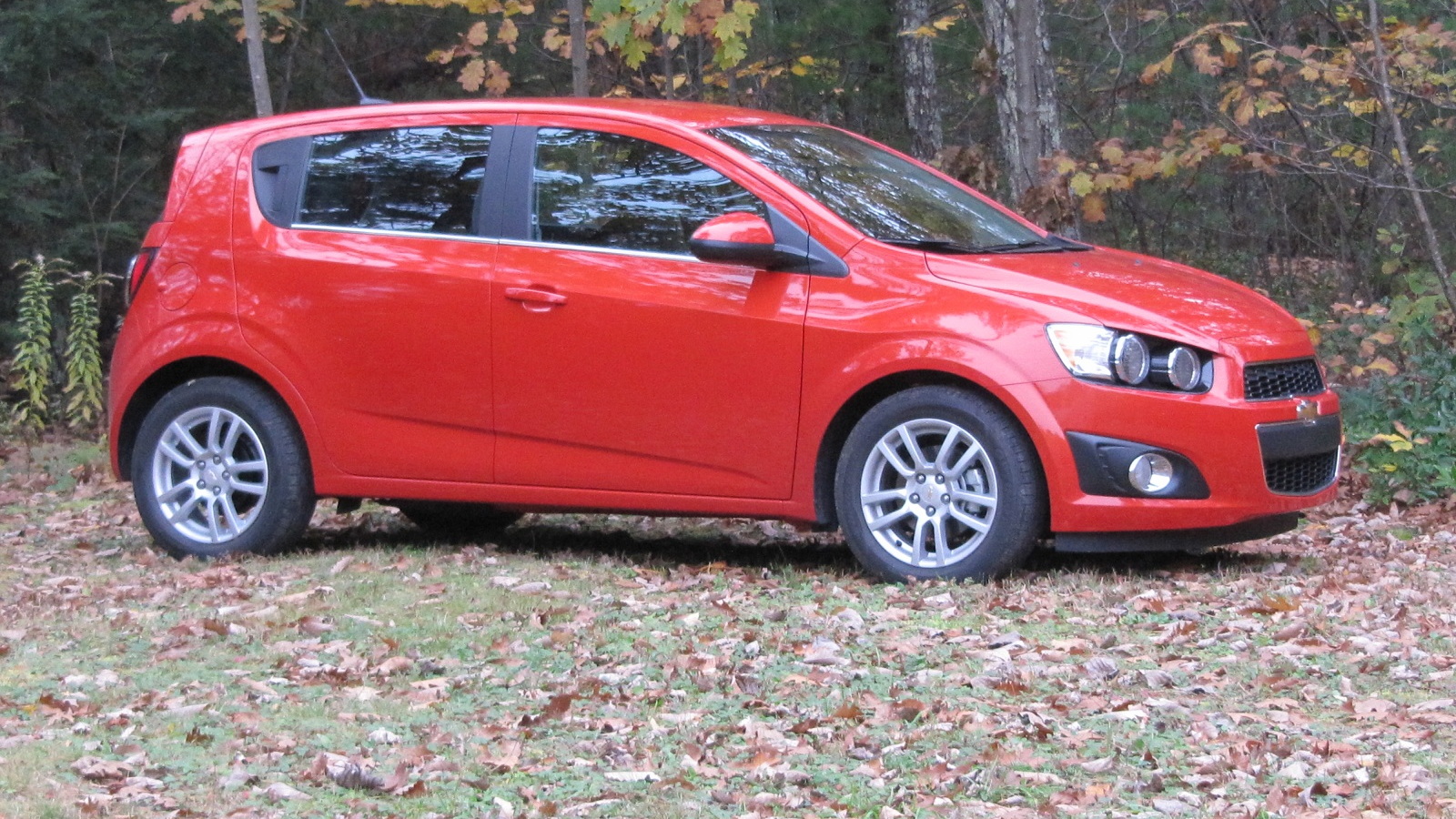 It's autumn, so what better way to highlight the changing leaves than a tomato-soup red Chevy Sonic subcompact?

Three weeks ago, we drove our first new Sonic: a high-end 2012 Sonic LTZ sedan with the 1.4-liter turbocharged engine.

We liked the little turbo, and found the sedan roomy and comfortable to travel in. But we're partial to hatchbacks, so we snapped up the chance to drive a five-door Sonic LT, which was fitted with the base-level 1.8-liter (turbo-less) engine.

Our bottom line: The 1.8 isn't as much fun to drive as the 1.4 turbo, and it clearly delivers worse gas mileage. Over a 550-mile trip of about three-quarters high-speed Interstate driving, we squeaked out only 30.0 mpg over the entire trip.

To be fair, that's better than the car's EPA combined rating of 28 mpg. City mileage is rated at 25 mpg, highway at 35 mpg. But those ratings just aren't that impressive.

The surprisingly small 12.2-gallon gas tank was an unexpected annoyance; we struggled to get 300 miles between fill-ups. Less gasoline lightens the car and improves efficiency, but 10 gallons (plus a 2-gallon reserve) doesn't last long at the 75-mph speeds on most Interstates these days.

Less fun to drive than the turbo

The 1.8-liter four is a perfectly good engine, but it's simply not as much fun to drive as the smaller turbocharged 1.4-liter option. It doesn't have the turbo's surge of power starting at around 2500 rpm, and it can get loud when it's pressed hard.

We occasionally noticed slightly grabby brakes on our test car, along with a noticeable drag on speed when the transmission shifted down as the car slowed.

In the interests of fuel economy, we noticed the transmission holding higher gears longer. On other models, Chevy uses anti-noise to cancel out objectionable sounds from what used to be called "engine lugging," but we doubt that's needed in the Sonic.

We also had a couple of intermittent noises in the car after a cold soak overnight: a static-y buzz from behind the dash on the driver's side, the other a creak from roughly the driver's seat-belt attachment point on the B-pillar. Both went away, and we should point out that we experienced no quality issues at all in our earlier Sonic.

Like the sedan, our 2012 Sonic hatchback grounded its front apron on our steep driveway. This is a problem we're seeing in more and more cars, as automakers extend front fascias downwards to improve airflow under their cars.

Inside, the LT model offers cloth seats rather than our LTZ's leather. The driver's seat included a fold-down right-side armrest, which we appreciated. In the Sonic hatchback, we were particularly aware of sitting up high--which makes the car feel bigger, since the driver isn't slumped below other traffic (SUVs and pickups excepted).

That included the $525 "Connectivity plus Cruise" package, made up of cruise control, remote start, steering-wheel controls for the cruise and the audio system, a USB port and Bluetooth connectivity.

It also included a wheel and fog lamp package at $295, upgrading from 15-inch to 16-inch painted aluminum wheels and adding fog lamps. Even the "Inferno Orange" metallic paint--a love-it-or-hate-it color, from our friends' reactions--was $195 extra.

Two weeks ago, our top-of-the-line LTZ sedan actually stickered at less--$18,055--with all the same options plus some more, and was a somewhat nicer car in our judgment. GM charges $700 to $900 extra for the five-door style, depending on model--so buyers who opt for the sedan get a nicer car for less money.

We still like hatchbacks, but we're not sure the Sonic hatch, as distinctive as its lines are, is worth almost a grand more. We'd rather spend the money to get the engine that's more fun to drive, and delivers better gas mileage.