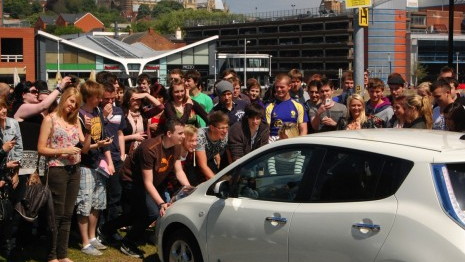 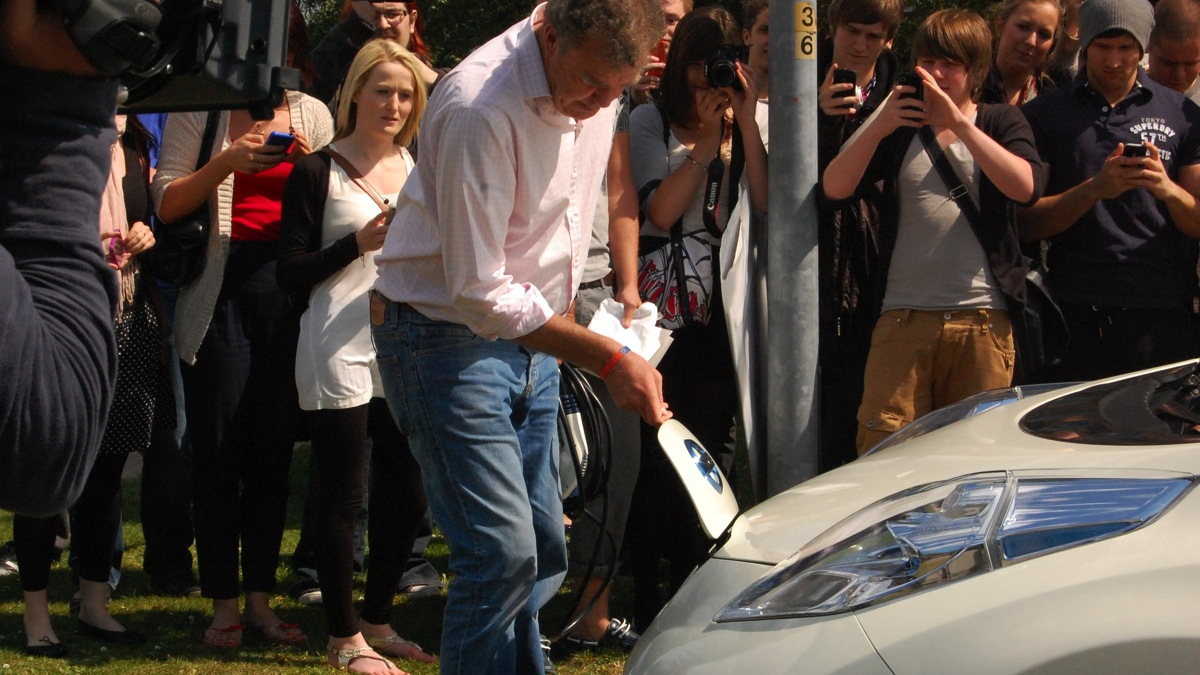 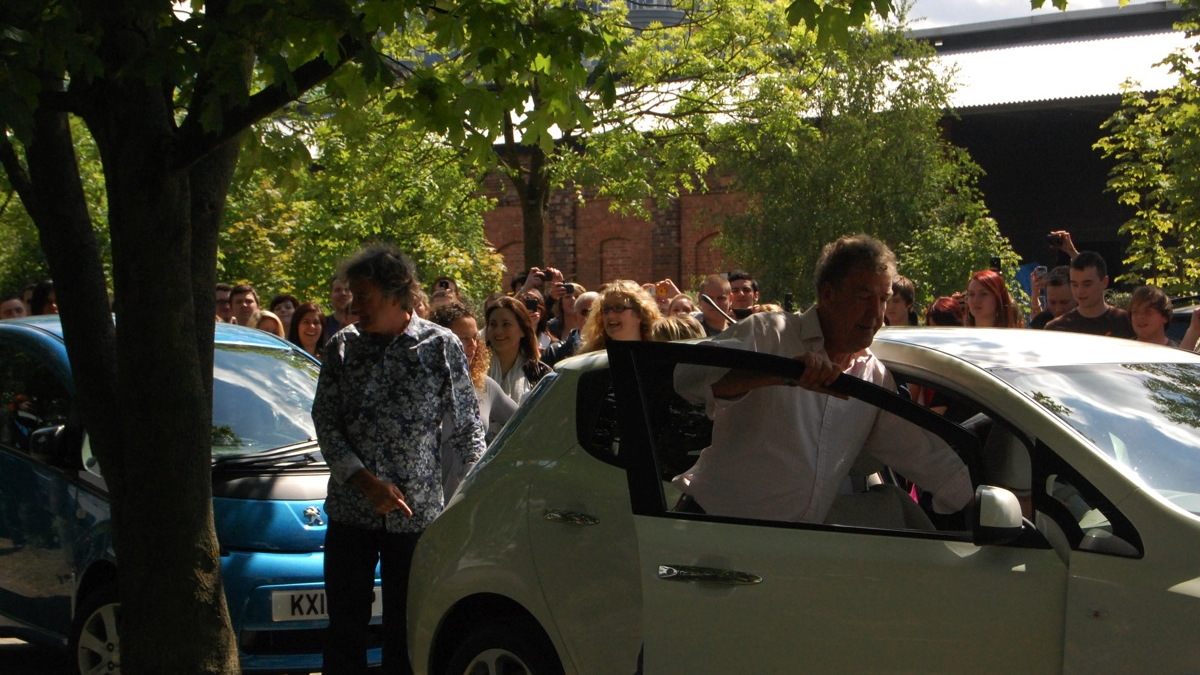 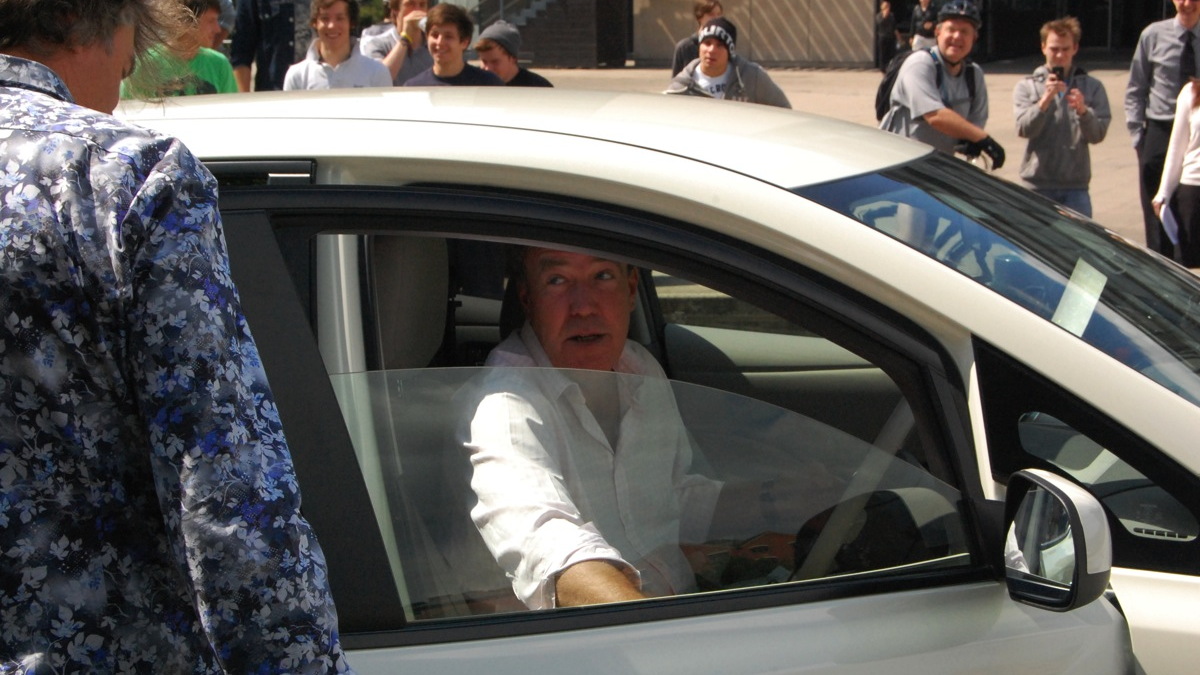 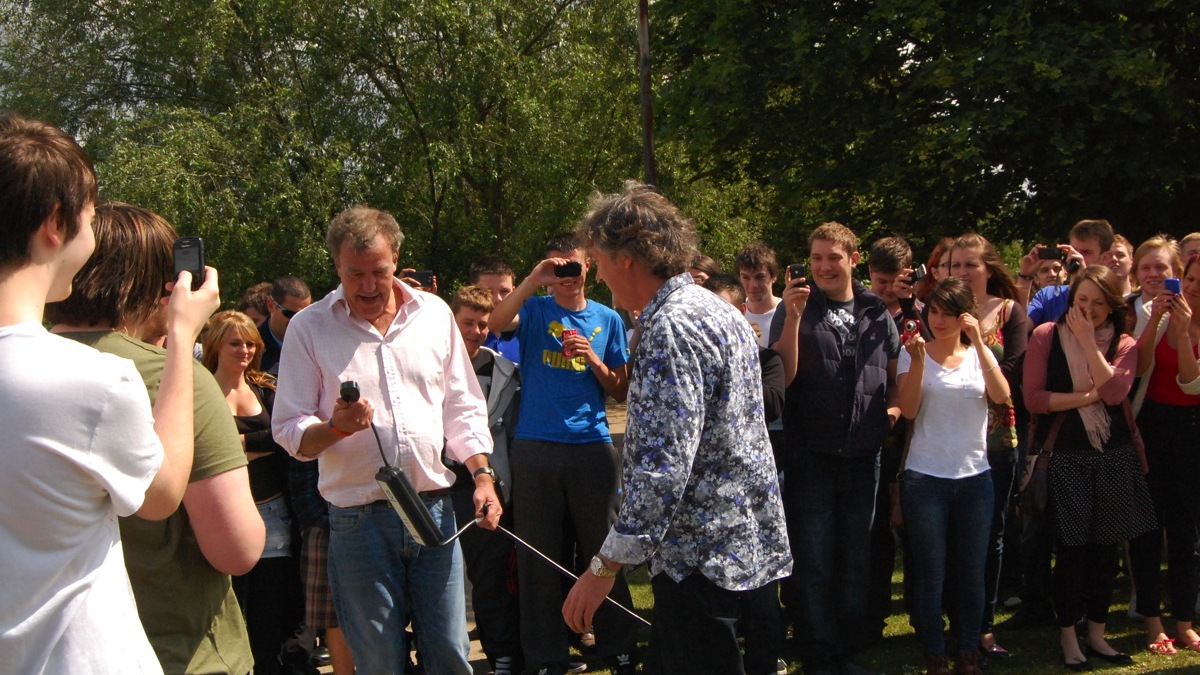 Have you ever been on those roads in North Dakota where you pass a sign that says “No gas for next 80 miles"?

Or perhaps you’ve traveled through the frozen wastelands of Northern Canada or Alaska and learned that the gas station you just passed was the last one for more than 100 miles. You’d be certifiably crazy to not stop and fill up ... right?

Well, crazy might be just one way to describe the latest antics of the U.K’s favorite motoring entertainment program Top Gear,

Its hosts, James May and Jeremy Clarkson, were spied yesterday in the rural city of Lincoln eliciting the muscle power of local university students to push a 2011 Nissan Leaf into a position where its apparently dead battery could more easily be recharged.

But as we’ve discovered before, nothing Top Gear does is as straight forward as it seems on TV.

A statement released exclusively to us by Nissan Motor (GB) Ltd reveals that the Top Gear production crew intentionally didn't recharge the car the night before.

The goal was to engineer the specific scenes that were described yesterday by local Lincoln news site The Lincolnite.

“Pictures rarely tell the whole story, as is the case here. Top Gear has confirmed to us that the crew intentionally drained the battery to inject suspense into the mission of finding a public charge spot.

"Lincoln is an area ... renowned for not having any public charging infrastructure. Top Gear does not intend to use the scenes of the car out of charge as an illustration that the claimed range is false.

"The car was fully charged overnight and we are confident that the presenters will have enjoyed driving it today."

According to Nissan, then, Top Gear says its intention is not to repeat the same kind of stunt it did back in 2008 with the Tesla Roadster.

Instead, we can infer that the popular entertainment show will highlight the difficulties of charging an electric car in an area known to have no electric car charging spots.

In short, taking a purposely flat electric car to an area without public charging stations--only to find it eventually drains its battery--is like not paying your credit card bill, and then wondering why you can’t use it any more.

Or not refilling your gas tank, and then taking an almost-empty car onto those long, flat streches of road in the least populated areas of the States, where gas stations may be up to 100 miles apart.

But the eagle-eyed among you may notice that while Top Gear chose a public-charging desert to film the escapade, they forgot one simple fact.

That is: While cars like the 2011 Nissan Leaf may charge faster using quick-charge Level III stations, they can also recharge on a standard domestic power outlet. And in the U.K., those are twice as powerful as the standard wall current in the States.