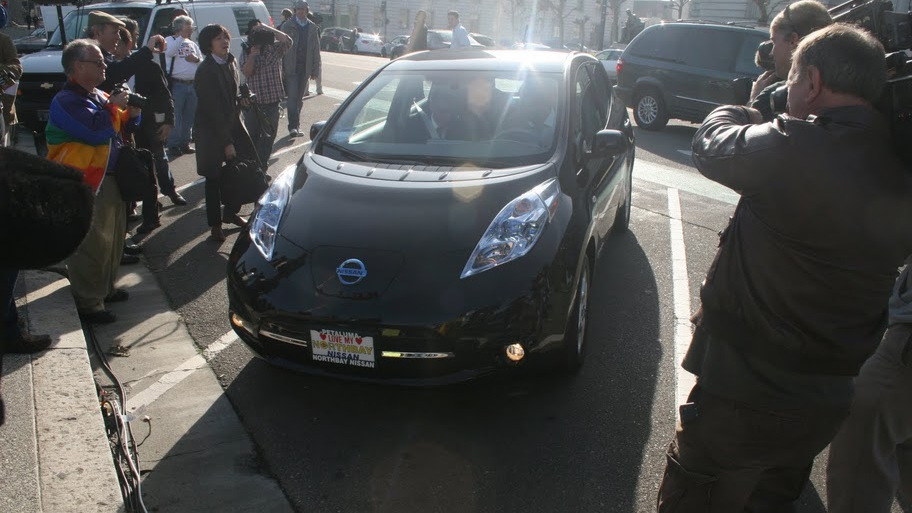 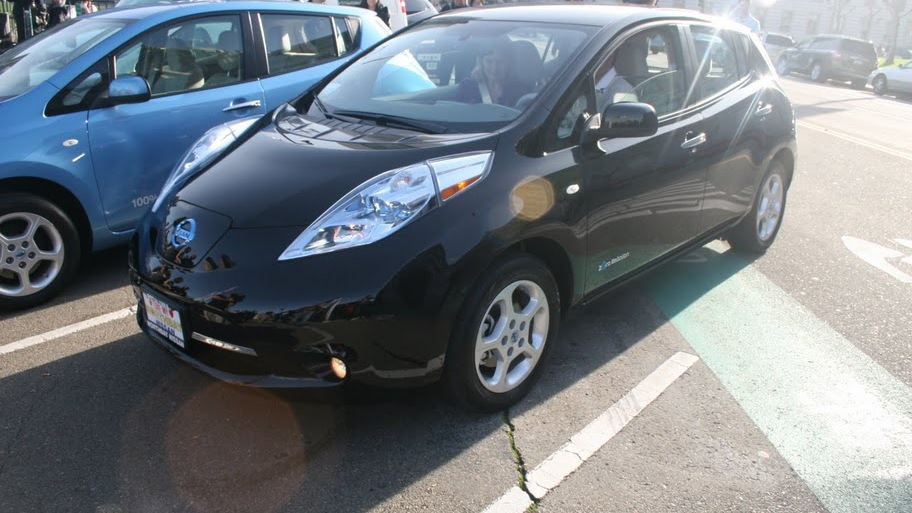 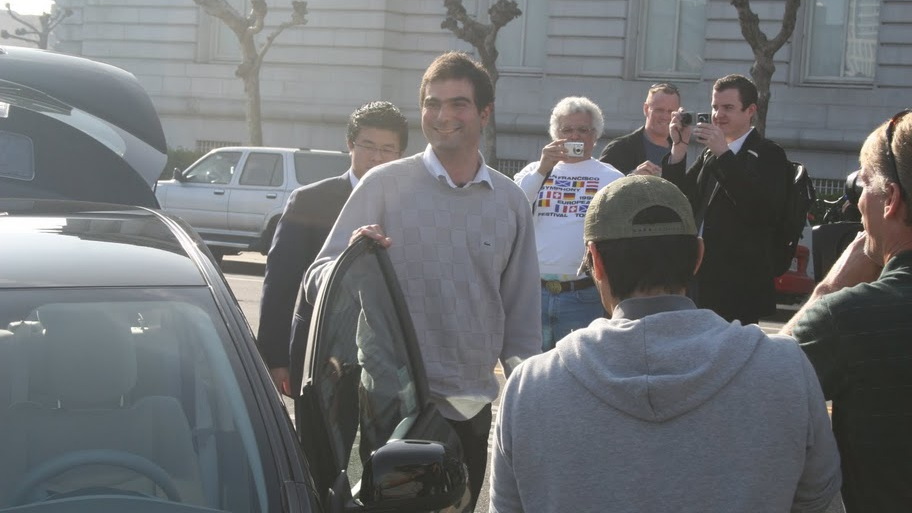 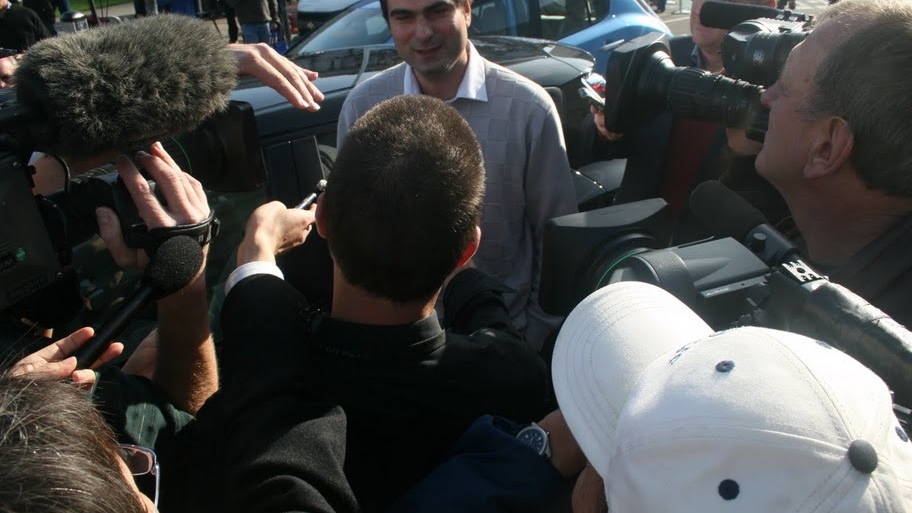 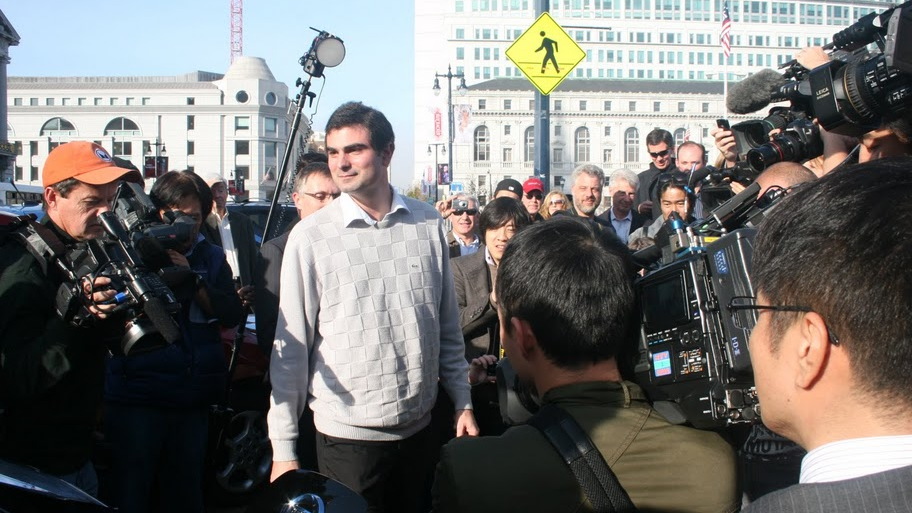 The first page of a new chapter in green-car history was written yesterday, as Nissan formally handed over a 2011 Leaf electric car to Olivier Chalouhi of Redwood City, California.

He was the very first person in the U.S. to order the all-electric vehicle, and the first to take delivery.

Chalouhi accepted the keys to his black 2011 Nissan Leaf SL at a dealership in Petaluma, about 40 miles north of San Francisco. Accompanied by four other Leafs, he then drove his new car to a press event at San Francisco's City Hall.

The scheduled 1:30 pm event kickoff was delayed about 15 minutes when the guest of honor got caught in the notorious San Francisco traffic. After crossing the Golden Gate Bridge, the convoy of Leafs drove along Lombard Street and pulled silently into City Hall.

Once the electric cars arrived--and Chalouhi plugged in his Leaf to recharge at City Hall's public charging station--a crowd of a few hundred listened to speeches by elected officials, Nissan representatives, and Chalouhi himself.

San Francisco plans to install roughly 100 more public charging stations for the Leaf and other plug-in vehicles, and officials claimed that the city and surrounding region had produced more early orders for the Leaf than any other.

Other electric cars there included a Tesla Roadster and a Toyota Prius converted to operate as a plug-in hybrid. One of the most popular attractions, though--at least for those well below driving age--proved to be the chance to take photos with Nissan's famed polar bear, star of a memorable Leaf TV commercial.

Chalouhi, 31, is the founder and chief technology officer of Fanhattan, a venture-backed stealth start-up in the connected TV space. His daily commute to work from Redwood City is roughly 10 miles, he said, noting that he commuted to work on an electric bicycle before the Leaf became available.

Chalouhi told reporters the Leaf will be his primary car, but that his wife Jana has another vehicle that the family plans to use for longer trips. A 240-Volt charging station has already been installed in the family's garage.

Asked how he chose the 2011 Nissan Leaf versus other options, Chalouhi said he wanted a car that was green, that could hold his family of four, and that he could drive on the highway with confidence.

The 2011 Chevrolet Volt range-extended electric car, he said, "isn't a pure electric vehicle" and "doesn't truly help the environment." He also noted it was more expensive, with a base price of $41,000 against the Leaf's price of $32,780.

Chalouhi expects to receive both the $7,500 Federal tax credit and California's $5,000 Clean-Air rebate, bringing his effective cost down to a little more than $20,000.

Yesterday's San Francisco event kicks off 10 days of festivities, with Nissan planning to deliver Leafs to first buyers in each of its early launch regions.

The second Nissan Leaf will be delivered to a retail buyer tomorrow in San Diego; he too was at the event, having driven up to San Francisco in his Toyota Prius hybrid-electric vehicle.

A further few Leafs will be delivered in Arizona, Portland, Seattle, and Tennessee over the next few days. The second shipment of Nissan Leafs, now on the high seas, is expected to arrive just before the holidays, and those cars will go to buyers in both Texas and Hawaii. Nissan said it donated $25,000 to the World Wildlife Fund to honor the occasion.

Unlike the low-speed or neighborhood electric vehicles sold as "electric cars" over the years, our first drive and full driving impressions led GreenCarReports to conclude that the 2011 Leaf is clearly "a real car", capable of doing anything that any other compact hatchback can do--except, of course, for its range of 70 to 100 or more miles.

For that reason, earlier this year, this website named the 2011 Nissan Leaf our GreenCarReports 2011 Best Car To Buy.

Reporting and photography for this article were provided by High Gear Media cub reporter Eugene Lee.