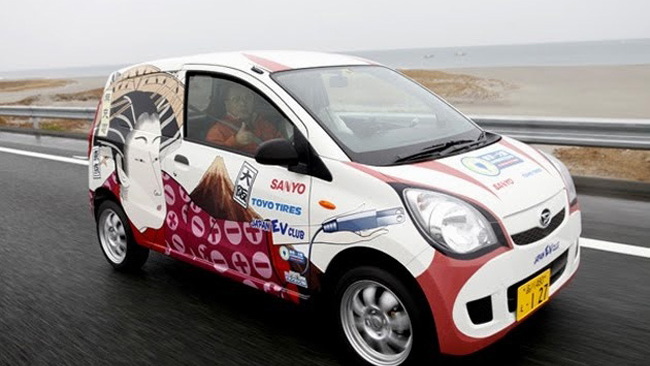 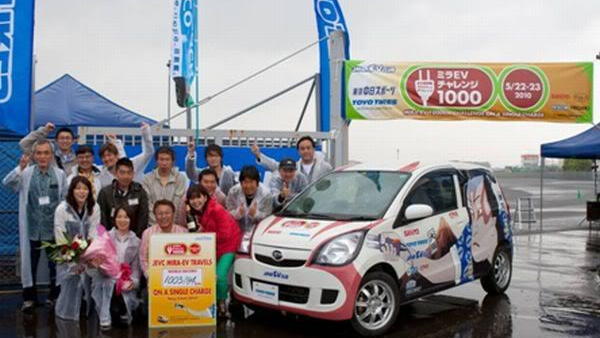 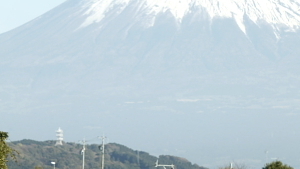 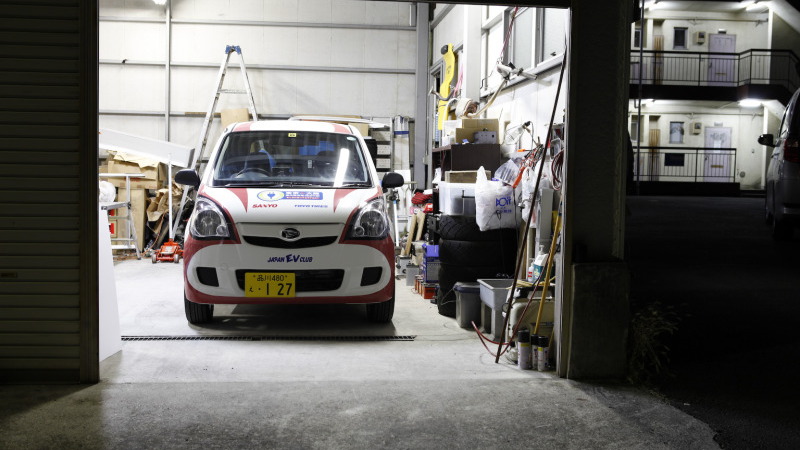 Last October, Simon Hackett and Emilis Prelgauskas set a new distance record for a production battery-powered vehicle: a hugely impressive 313 miles in a 2008 Tesla Roadster. That's around 70 miles more than the EPA's rated range for the world's best -known EV.

Unfortunately for them, not even a month later, the Japan EV Club (JEVC) beat that distance by 44 miles. Now, that same group has upped the ante significantly, recording a stunning 623 miles on a single charge in their small converted Daihatsu Mira van.

Their rather less photogenic but significantly more kawaii ("cute") Daihatsu Mira van is an electric home conversion, based on one of Japan's popular kei-class city cars.

These kei-jidosha are usually powered by a 660cc gasoline engine (that's less than half the 1.4-liter capacity of the 2011 Chevrolet Volt's range extending engine). The JEVC ditched that in favor of a 35-kilowatts (46-horsepower) electric motor.

Powering the Mira EV is a Sanyo lithium-ion battery pack containing 8320 laptop-type cells for a total output of 74 kilowatt-hours. This is the same approach that Tesla has taken for its much higher-performance Roadster.

Like many home conversions--and differing from production EVs like the Tesla Roadster and 2011 Nissan Leaf--the Mira conversion retains its standard five-speed manual transmission. With a total weight of less than 1800 pounds (800 kg), its relatively  low power isn't much of a problem, and range is aided by low rolling-resistance Toyo tires.

On its first run, the team covered the 357 miles from Tokyo to Osaka in 13 hours, at an average speed of 27 miles per hour. Clearly not a high speed run, but probably representative of Japanese traffic conditions and the hilly terrain between cities.

Then, back in May this year, the EV distance record fell again.

The JEVC had been hard at work behind the scenes, turning their Daihatsu Clark Kent into an EV Superman. They benefited from even lower rolling-resistance Toyo Eco Walker tires, along with weight reduction measures including a carbon fiber seat.

No doubt using some fairly light-footed driving techniques, the EV Club decimated their previous record by a full 278 miles--showing 623 miles on the trip meter before the power died.

Along the way, the team took a trip to the Fuji International Speedway where they displayed the car to schoolchildren learing about electric vehicles and environmental issues.

Once again,the team had to battle with steep hills and crawling traffic throughout their five-day, no-charging journey. Average speed this time was only 25 mph, accounted for by more frequent stops on the longer journey.

The Japan EV Club is a big advocate for home conversions. While our Japanese is a little rusty, they extol the virtues of a converted car that gives an existing car a longer life than one powered by a finite resource such as gasoline. And they say a home EV conversion is actually quite simple, owing to the low number of parts needed in an electric drivetrain.

Above all, conversions are an inexpensive way into the world of EV ownership. The team highlights the converted taxis and three-wheelers used daily as public transport in the Middle and Far East.

Although the Mira isn't likely to appear on U.S. soil any time soon, you'll soon be able to drive something very similar: Mitsubishi's upcoming 2012 i-MiEV is another kei-class car with its tiny gasoline engine replaced by an electric motor and batteries, albeit this time by the automaker itself.

You won't quite manage 623 miles on a single charge--USA Today struggled for a real-world 50-60 mile range--it'll offer the benefits of small size and like the Mira, it'll be at it's most efficient in city traffic, where low speeds are less of a drain on the battery.

The 2012 Mitsubishi i-MiEV is expected to go on sale in the fall of 2011 at a pre-tax incentive price possibly as low as $27,000. You'll be paying a lot for not-a-lot of car, but for some, the cute looks and fun drive will be all they need from an EV.

The final word goes to the Japan EV Club's Mira driver, who wrote on the team's blog,

"The 'no-charge trip' is now over,
But Mira EV Challenge has just begun."

Is 623 miles just a taste of future electric-vehicle range?