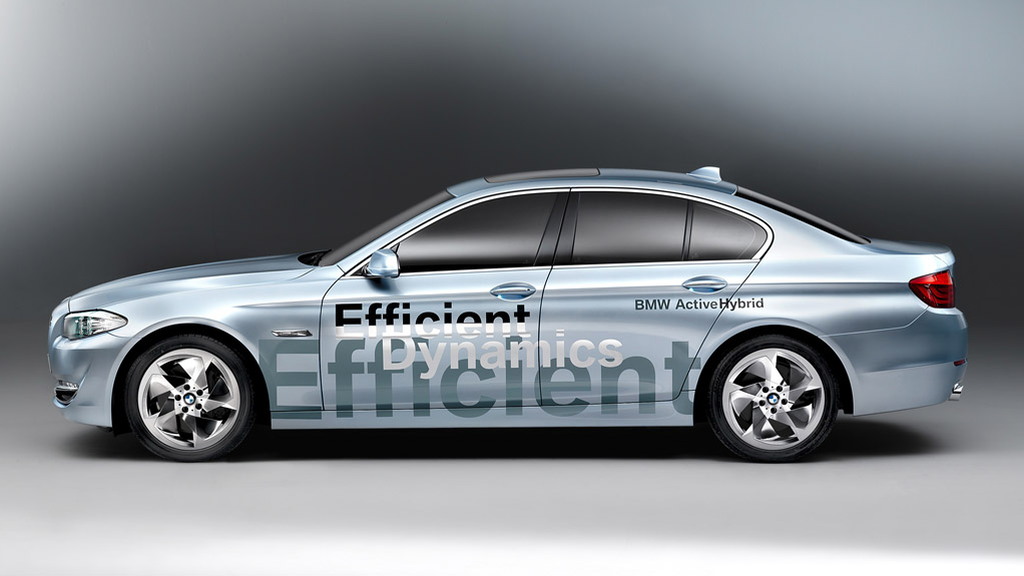 We've already seen two hybrids from BMW: the 2010 ActiveHybrid X6 "sport activity vehicle" and 2010 ActiveHybrid 7 full-size sedan. Now BMW's third hybrid model, which it has hinted at for several months, will be unveiled next week at the Geneva Motor Show.

As a show car, its full name is the BMW Concept 5-Series ActiveHybrid. But in fact, it's a very lightly disguised 2011 BMW ActiveHybrid 5, the first hybrid model of the 2010 BMW 5-Series sedan. It represents a new generation of the system used in the ActiveHybrid 7.

From V-8 to straight six

The concept uses a lithium-ion battery pack (of unspecified capacity) near the rear axle, and a 40-kilowatt (54-hp) electric motor between the engine and the eight-speed automatic transmission. The motor in the hybrid 7 was rated at only 15 kilowatts (20 hp).

In this case, however, the gasoline engine is a twin-turbo straight-six (of unspecified displacement and power), rather than the 440-hp twin-turbo V-8 used in the full-size hybrid 7-Series.

Unlike the first-generation system in the hybrid 7, the new system allows all-electric travel in low-speed city travel. In most driving, however, it simply adds torque to assist the gasoline engine and reduce the fuel it uses.

The engine switches off when the car is stopped or under very light load, to take advantage of the electric running. And it recharges the battery both in overrun and through regenerative braking.

BMW quotes an improvement in fuel efficiency of more than 10 percent for the hybrid 5-Series against the non-hybrid straight-six model.

Electrically operated accessories, including power steering and air conditioning, draw power from the battery pack and keep the car operating normally even when the engine is off. This also lets the driver tell the car to cool itself, via remote control, without starting the engine.

A hybrid that plans ahead

BMW has added a further refinement by integrating navigation system data into the control software that manages overall energy consumption among the engine, the motor, and the battery.

If the chosen route includes a downhill section of road, for example, the system might use more energy from the battery pack than usual--knowing that it would be recharged on overrun as the car passed through that section.

BMW says this "forward-looking function" can extend the car's all-electric range by up to 30 percent, though the company provided no figures on how far that might be.

It's not clear which superlative BMW plans to apply to the hybrid 5-Series when it launches. It calls the ActiveHybrid X6 the "most powerful hybrid in the world" and dubs the hybrid 7 "the fastest hybrid sedan in the world."

While BMW cooperated on development of the first-generation mild hybrid system with Mercedes-Benz, which used the same lithium-ion battery pack and electric motor in the 2010 Mercedes-Benz S400 Hybrid, the companies may be diverging on hybrid tactics.

Mercedes-Benz is expected to add a hybrid model of its midsize E-Class, which competes with the BMW 5-Series. The 2012 E300 Hybrid, however, is expected to use a 2.2-liter twin-turbocharged four-cylinder diesel engine, not a gasoline engine.

This further separates the two German makers of luxury sedans. Mercedes-Benz plans to fit smaller engines to all its hybrids to maximize fuel efficiency, giving correspondingly greater improvements than BMW achieves by tuning for performance.