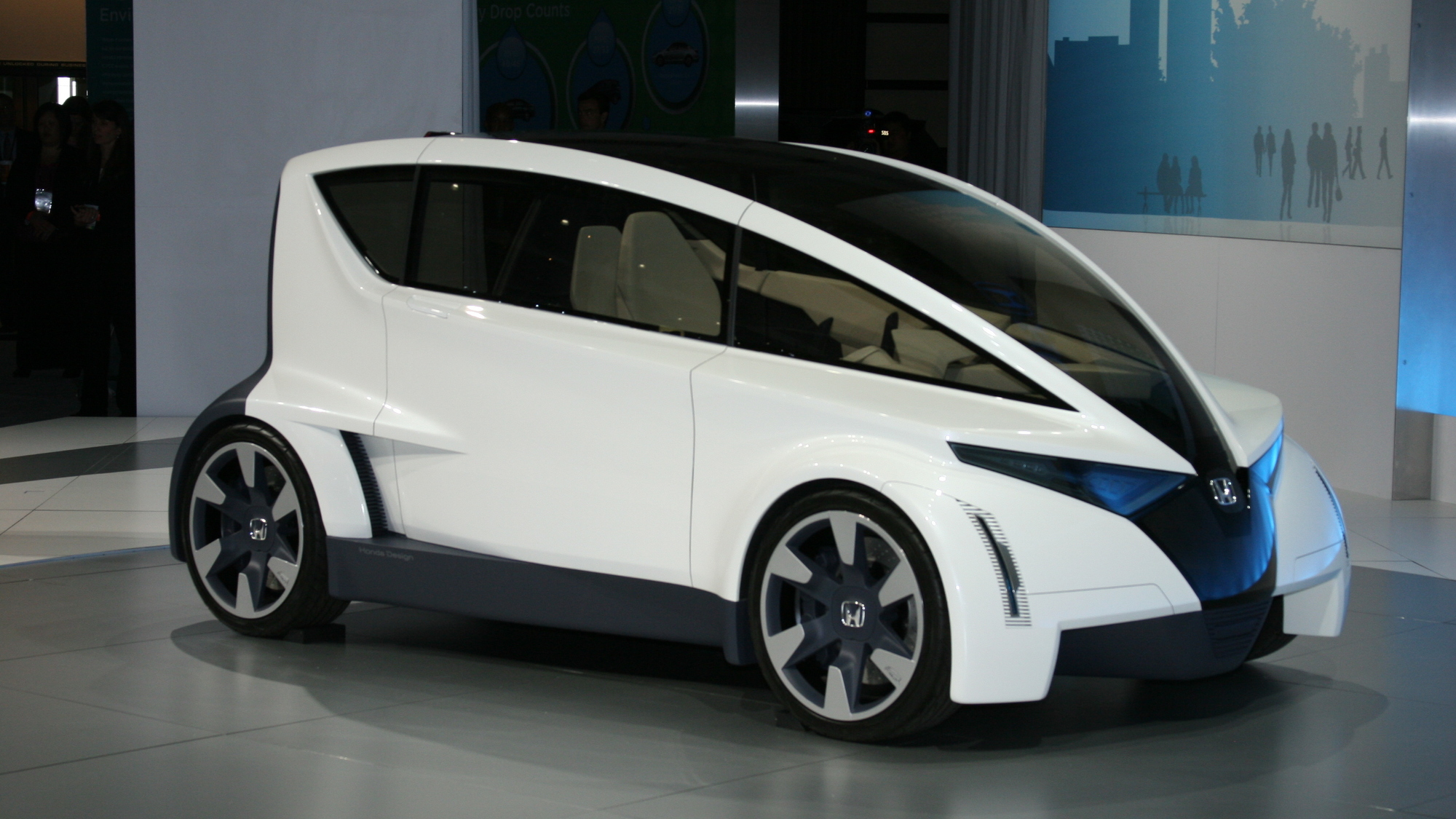 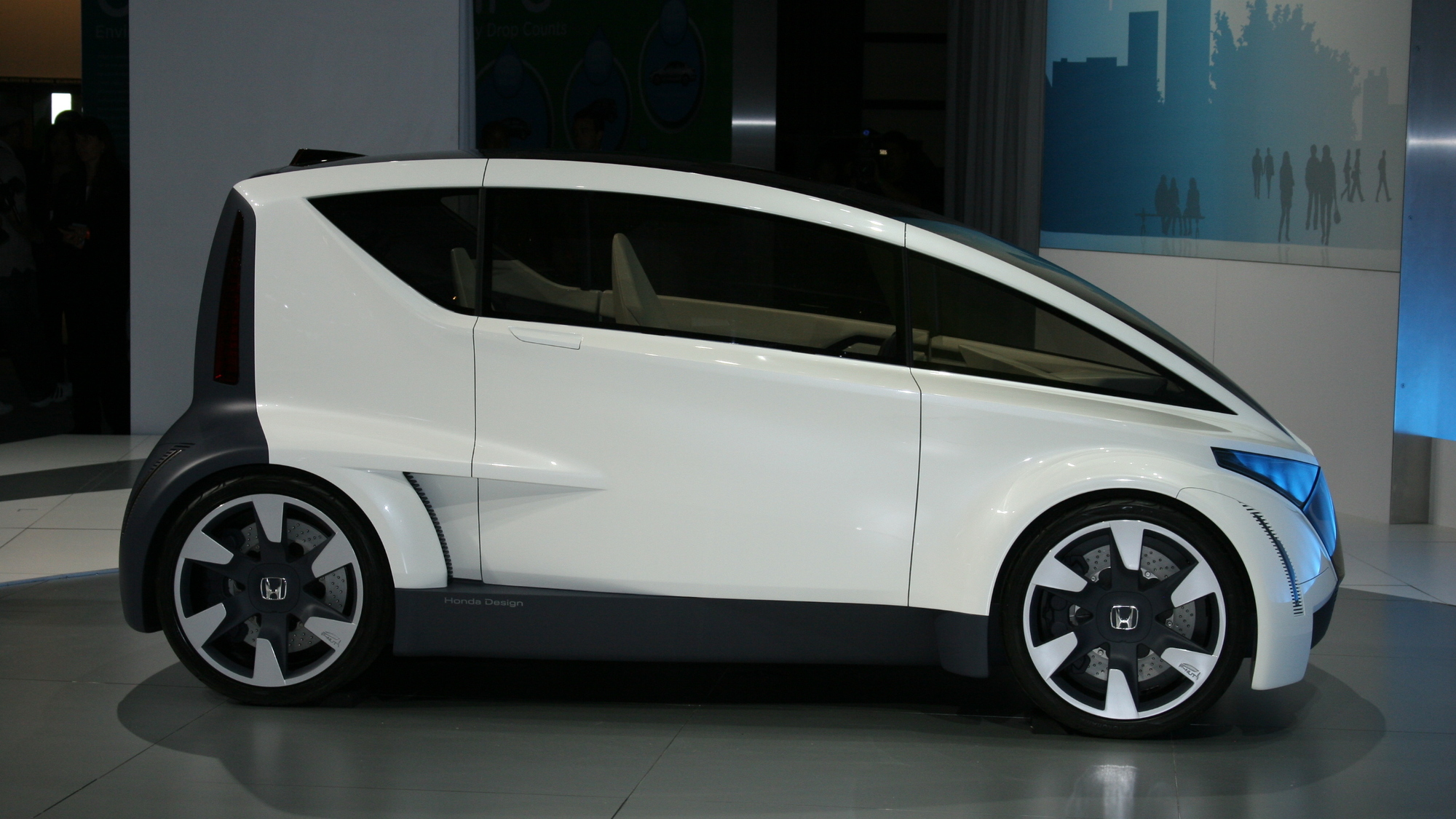 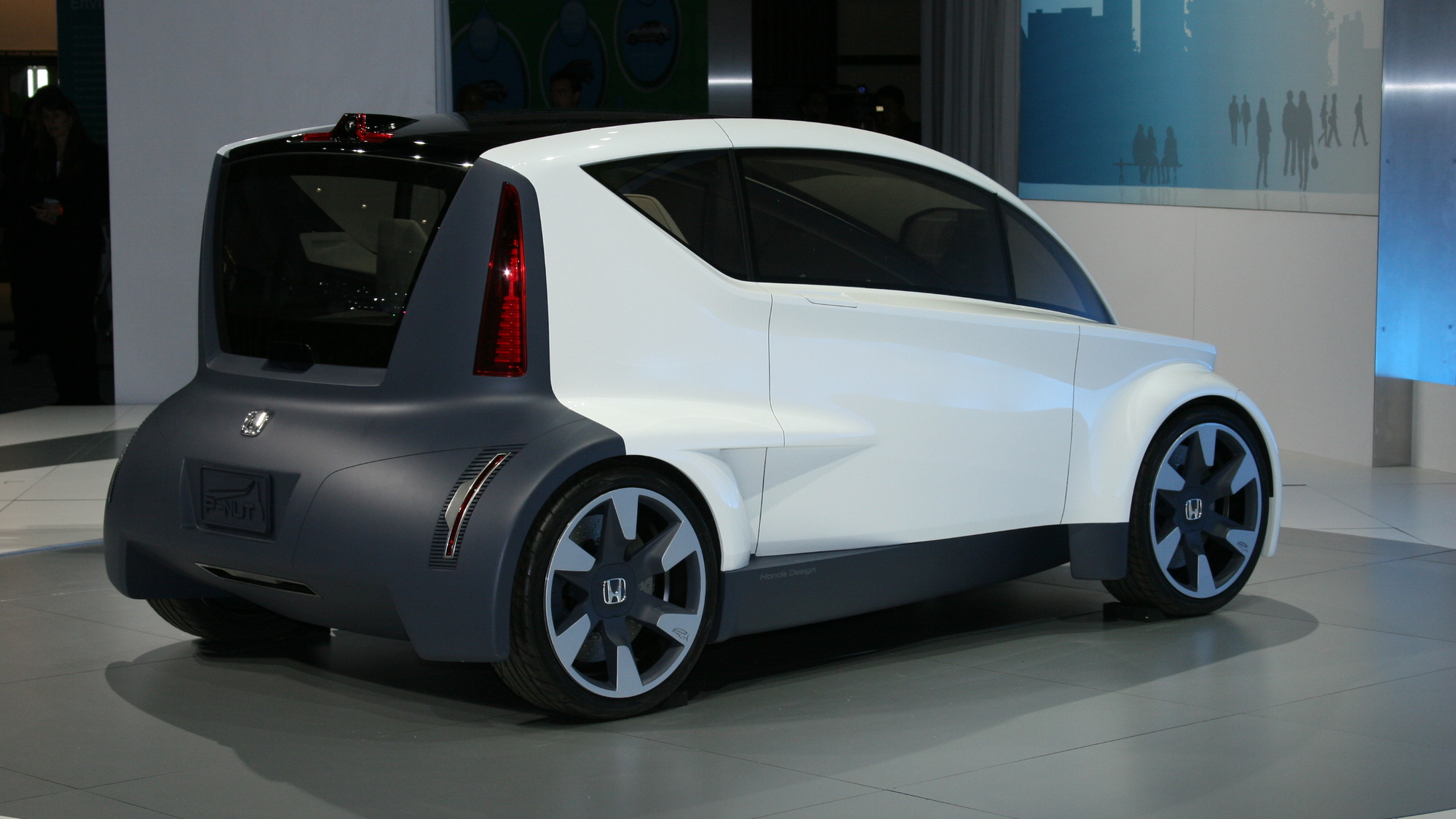 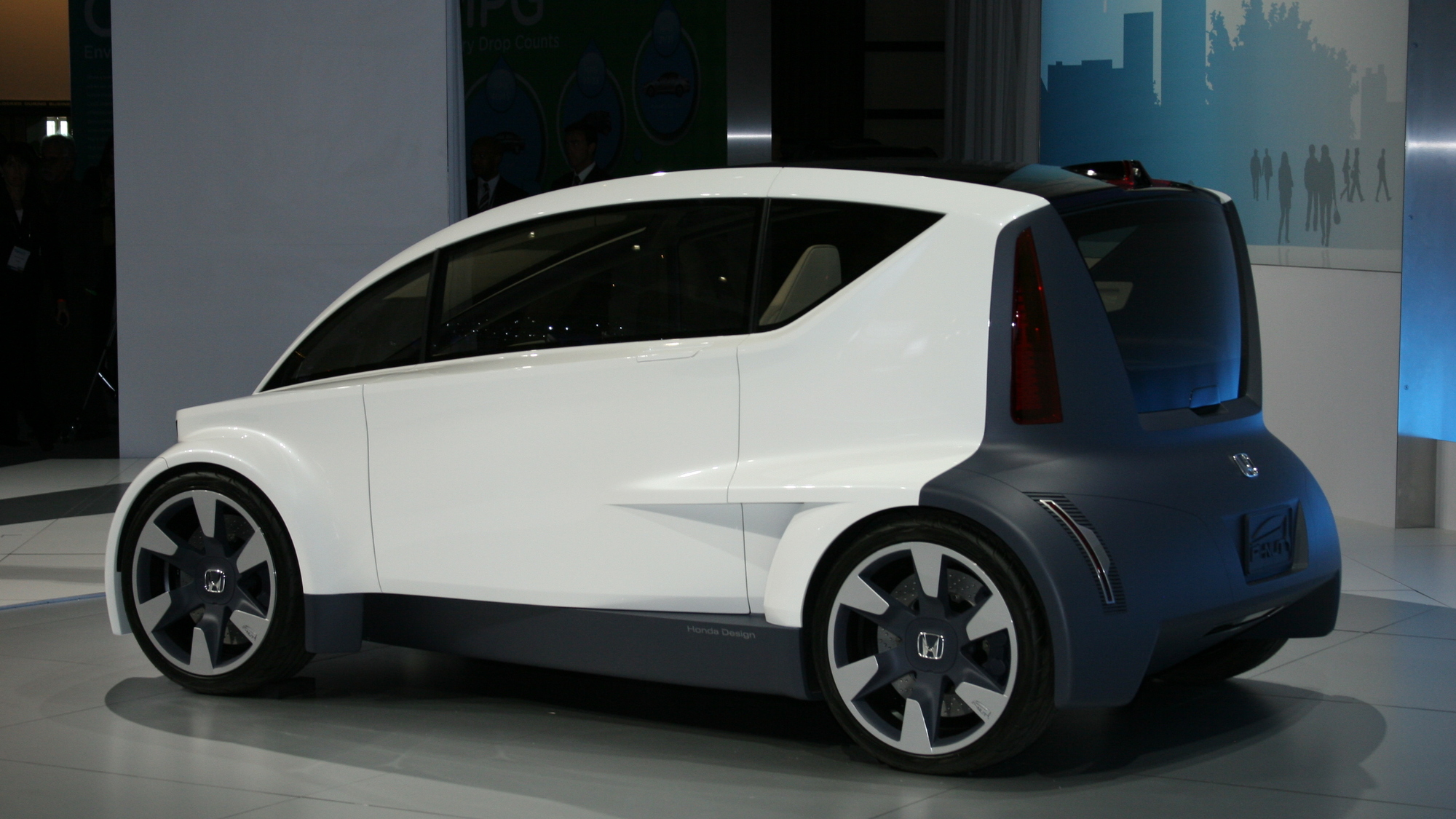 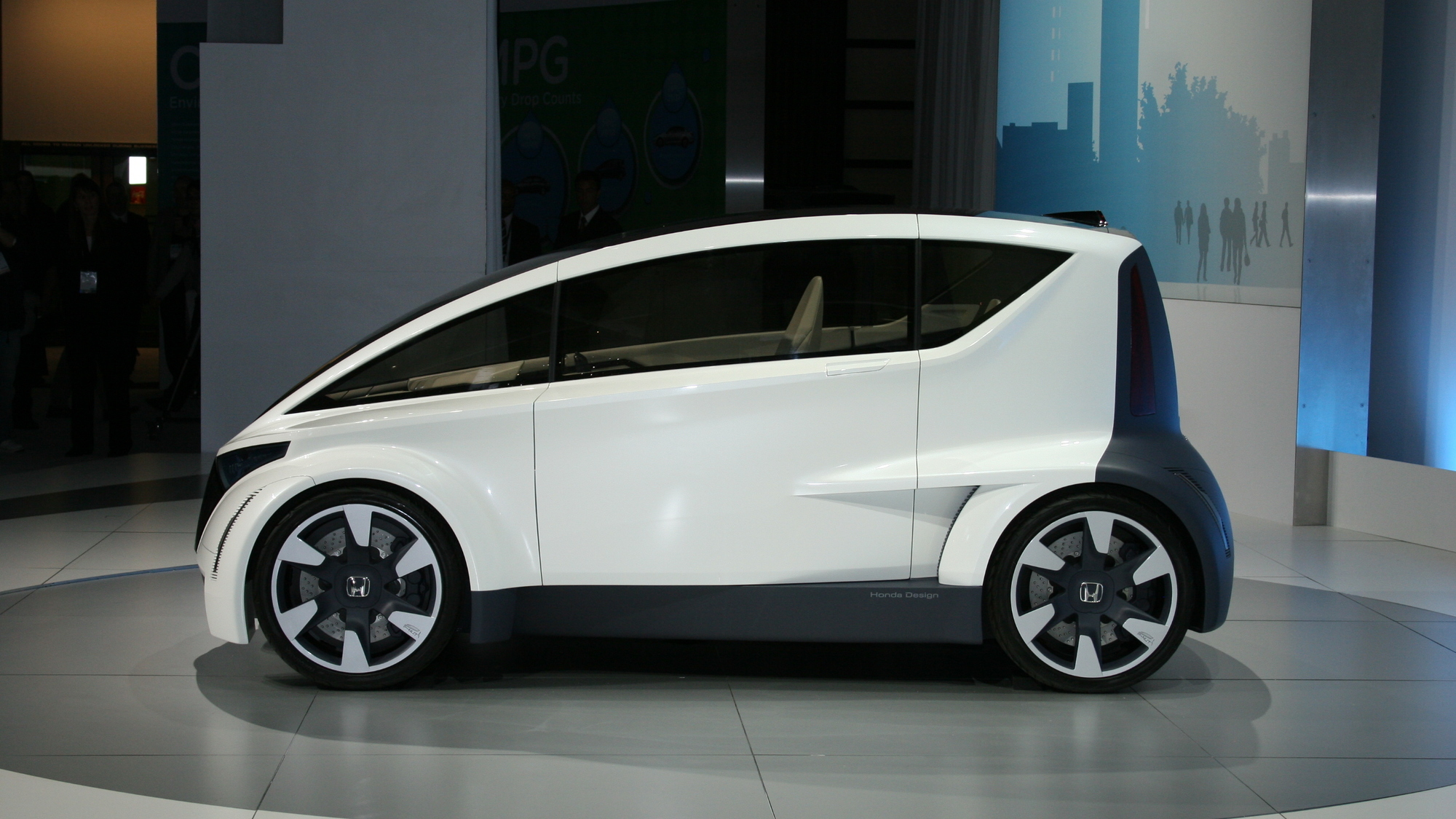 The smallest Honda sold in the U.S. is the 2010 Honda Fit, lauded for its almost infinite combination of interior configurations as well as its sporty driving and handling.

But while Honda makes cars even smaller than the Fit for Asian and European markets, it hasn't sold them here.

Its latest concept, unveiled at the 2009 Los Angeles Auto Show, explores what a stylish and ultra-compact Honda urban car, stuffed with passenger amenties, might look like 10 or 15 years hence.

Like the 2010 Smart ForTwo and the upcoming 2011 Scion iQ, the P-NUT concept minimizes the footprint of the car for easiest maneuvering in tight urban quarters. It's just over 11 feet long, less than 6 feet wide, and it stands 4'9" high.

Driver up front, others back and to the side

The driver sits centrally, with two passengers behind. That's one more seat than the Smart ForTwo, a dedicated two-seater, but the same as the more conventional three-seat Scion iQ. Honda says this gives each of the three occupants legroom equivalent to that in a midsize sedan.

The arrow-shaped styling (some call it V-shaped) was created at the company's Los Angeles-based advanced design center.

The P-NUT has what Honda calls "crisp angles with dynamic flowing lines," creating a "sleek and aggressive exterior" giving a "spacious and open" interior with good outward visibility.

Because this is a pure design study, minus such useful items as windshield wipers and door mirrors, Honda can afford to be casual about what might actually power the P-NUT.

The company says only that the rear engine bay could hold "a wide variety of potential propulsion technologies," including a small, high-efficiency gasoline engine, a hybrid powertrain, or even a battery pack for pure electric drive.

The rear seats of the small hatchback fold up and out of the way for greater load space. And the car's futuristic nature lets Honda say cheerfully that, "the windshield serves as a heads-up display for the navigation system and the back-up camera."

There's a serious message behind this whimsical micro-car, though. In Asia, tiny cars have to be four-seaters. But in the States, where cars are larger and cheaper than in any other market, tiny cars like this are a lifestyle choice, or a style option.

So Honda's goal was to "explore the potential for a new type of small-segment-category vehicle that overcomes many of the objections for existing micro-car designs," said Dave Marek, director of advanced design for Honda's U.S. arm.

He said the P-NUT would embody "premium sophistication," which sounds to us rather like an Audi. While the P-NUT includes many functional concepts, Marek said, "it also shows that small cars don't have to compromise on style or amenities."

And if cars this tiny are ever to gain a lasting foothold in the U.S., they will have to be fully competitive on everything except size.

Warning shot across the bow

Right now, Smart has enough worries of its own, with sales falling from last year's highs. And we won't know how the 2011 Scion iQ will be received for another year or so.

But we think that if Honda enters the field, other competitors should watch their flanks. Because if there's one thing Honda is very, very good at, it's building compelling small cars.