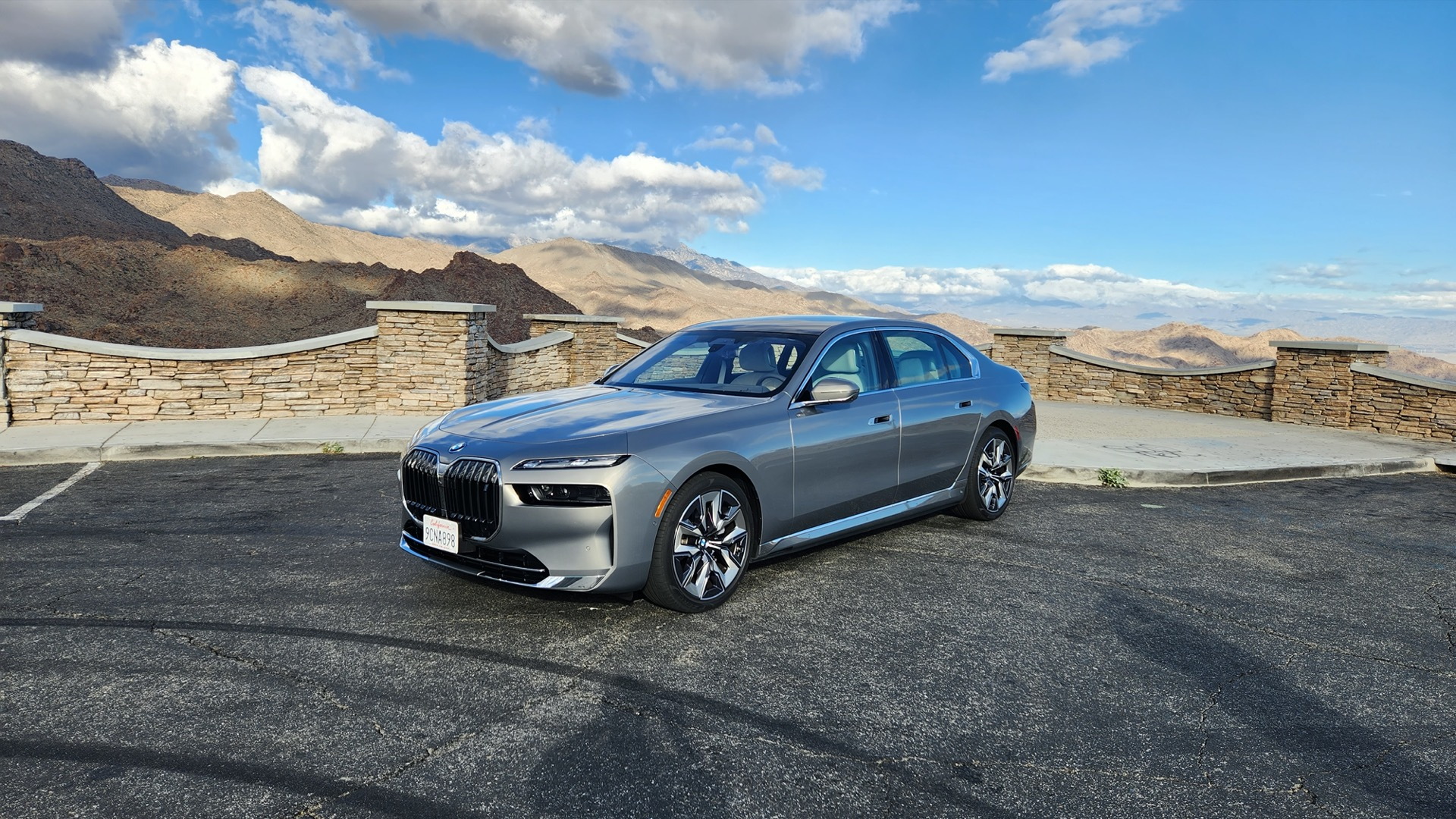 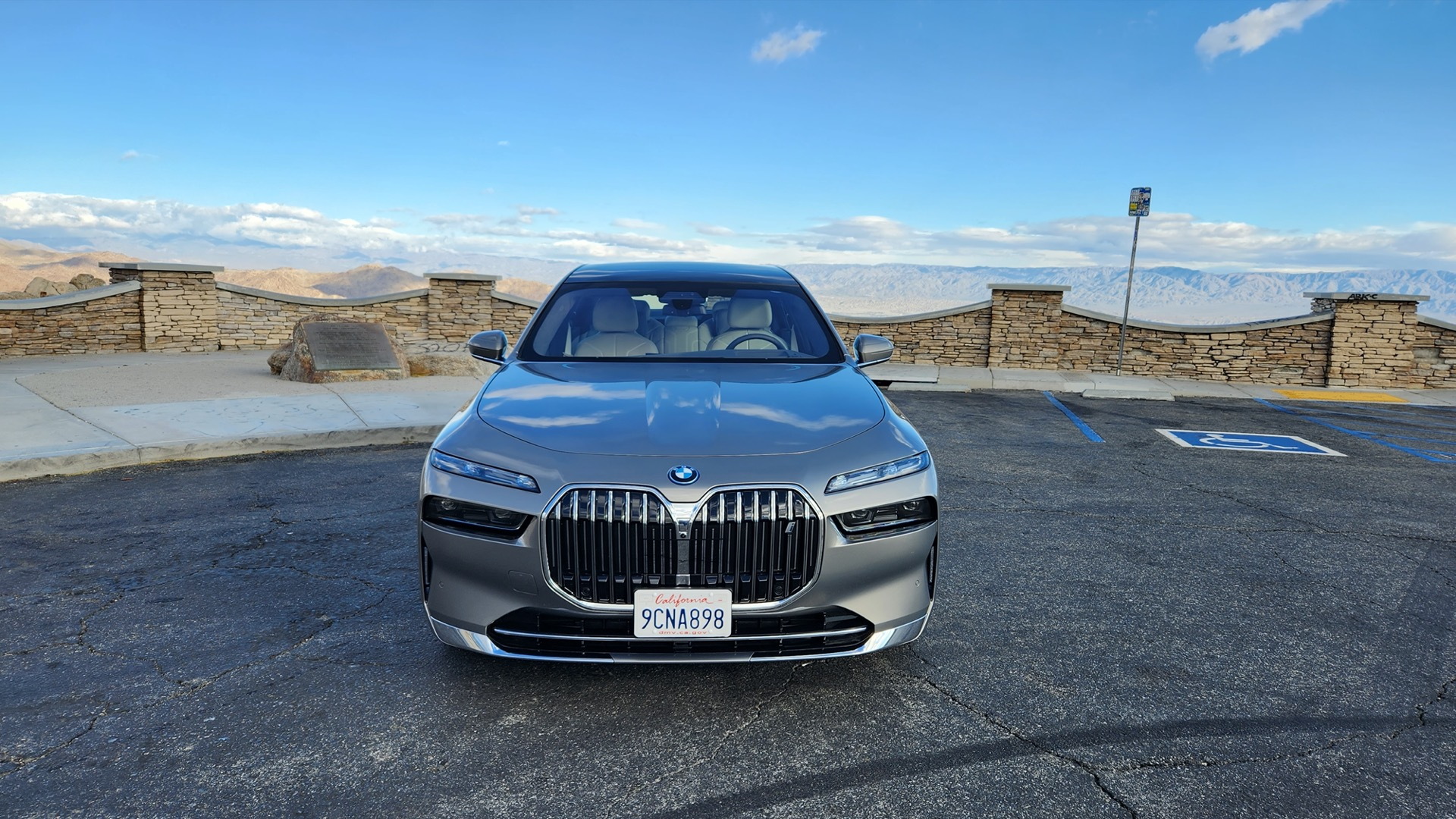 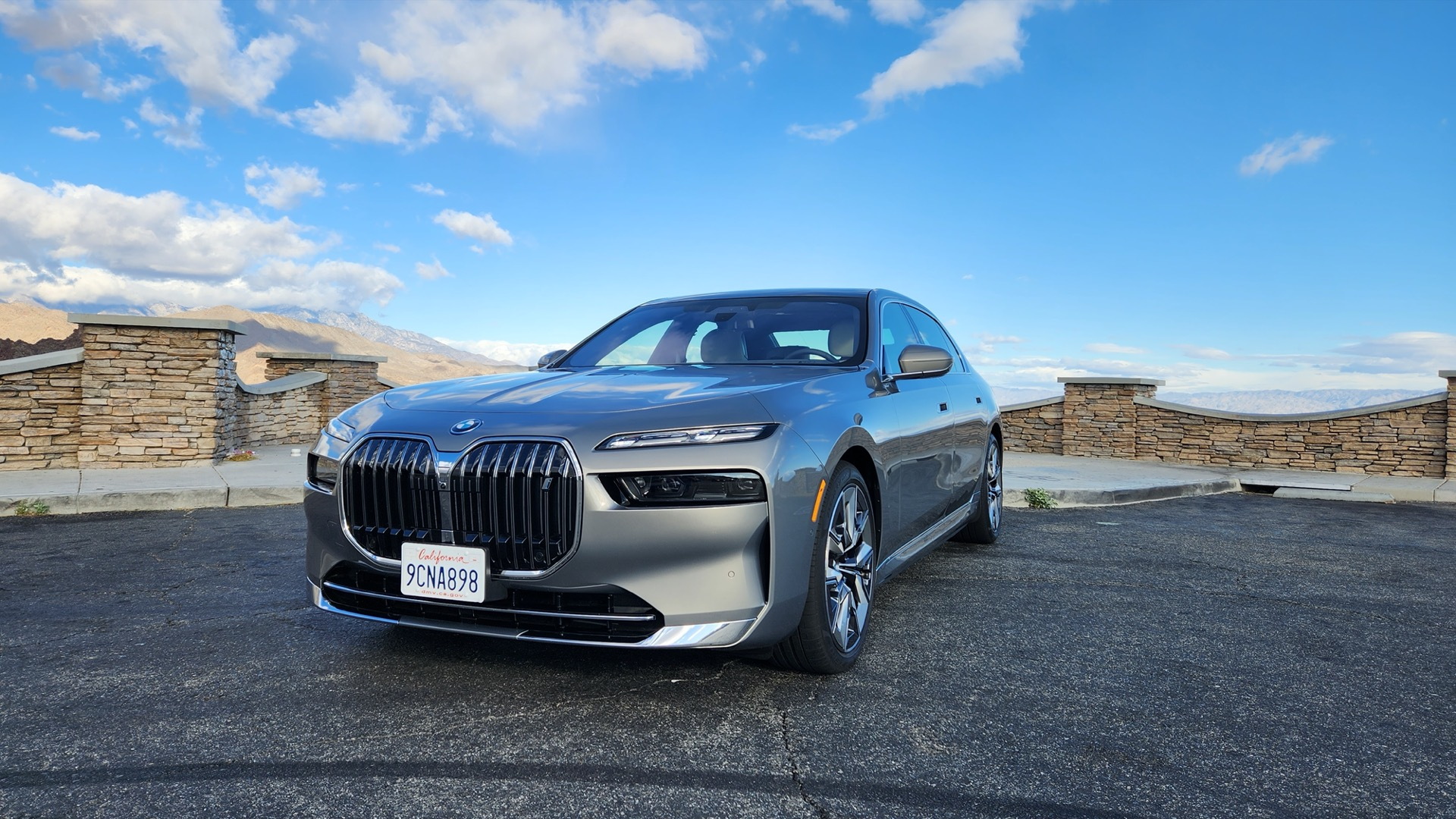 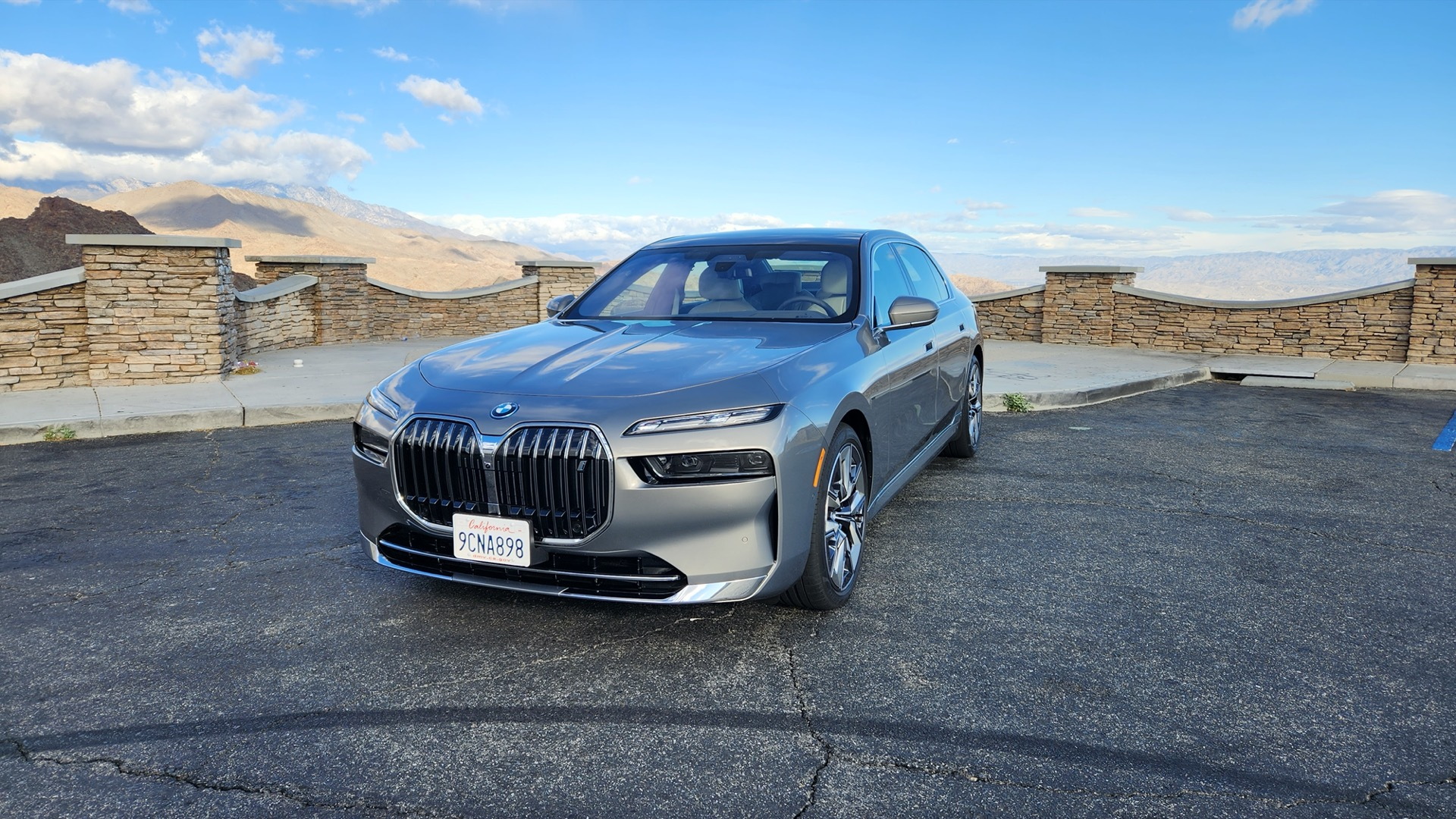 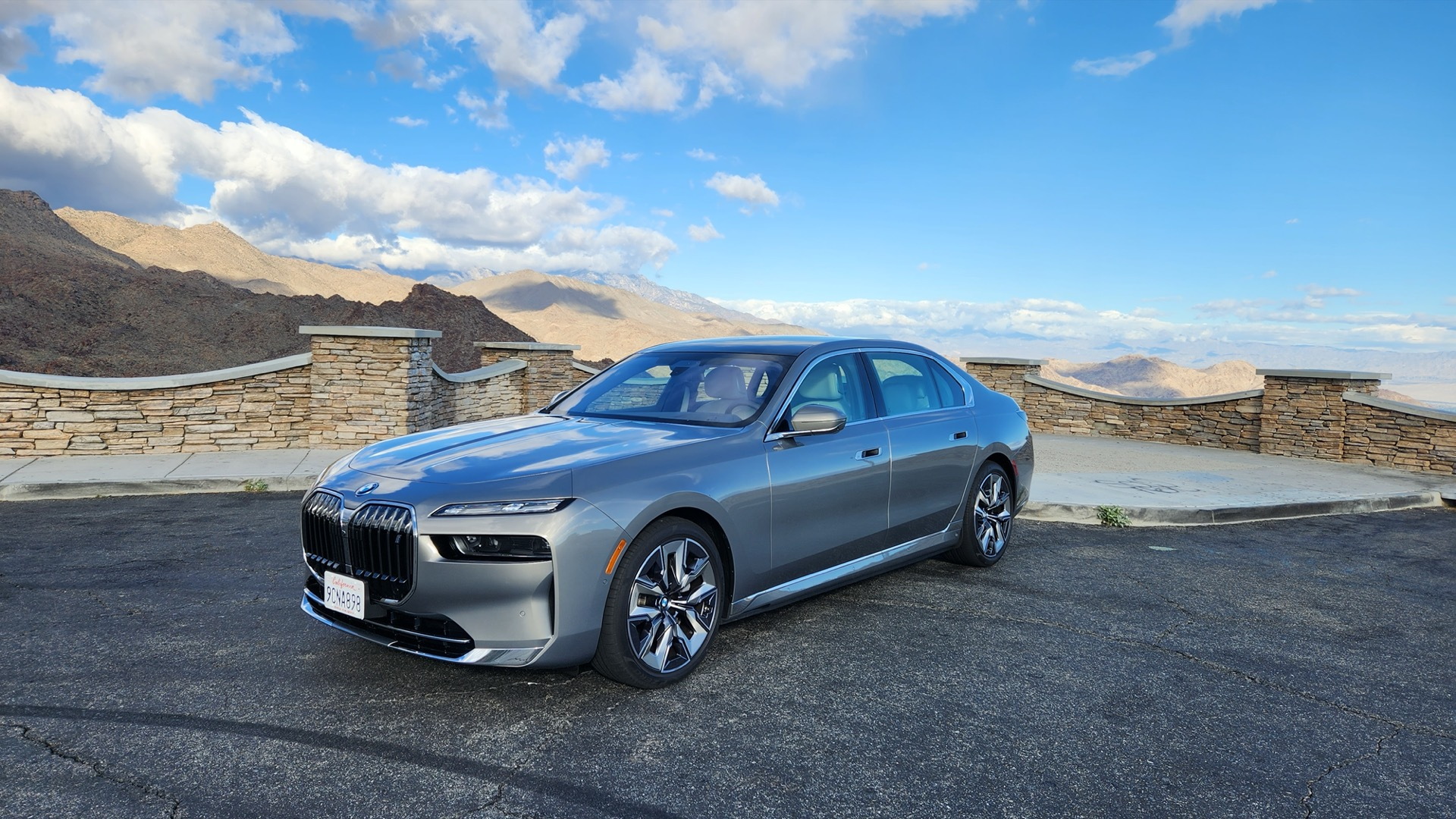 The 2023 BMW i7 is a revelation. For the first time in 10 years, a legacy automaker has produced a large electric luxury sedan that takes the segment into the modern age—and is conclusively better than its gasoline counterpart.

The feat is even more remarkable because the i7 is an adaptation of the gasoline-powered 7-Series, BMW’s benchmark sedan and competitor to the Mercedes-Benz S-Class. Justified skepticism greeted the Bavarian automaker’s 2016 announcement it would build future electric cars on platforms shared with gasoline and diesel models—quite unlike the pioneering i3 compact hatchback and i8 plug-in hybrid sports coupe that were its first EV entries.

That process had some missteps; the Chinese-built BMW iX3 was announced, then canceled, for North America, almost surely because its EPA-rated range would have fallen below the critical 200-mile mark. The BMW i4, positioned to compete with the Tesla Model 3, was its first EV to share looks with a fossil-fuel model, in this case the 4-Series Gran Coupe. It was good, but not breathtaking, especially in the lower-end i4 eDrive40 version.

Now the BMW i7 shows what’s really possible when the company puts its mind to the task of making an electric version of its flagship, now in its seventh generation since its 1977 debut. It competes with the Lucid Air, the Mercedes EQS, and the Tesla Model S.

You’ll have to be a BMW geek to distinguish the i7 from its gasoline 760i sibling. The electric car’s large double-kidney grille is mostly a blanking plate, but the heavy vertical ribs disguise that. You won’t read it as an EV from 20 paces. The easiest way to tell them apart is the badges on the trunk lid.

The latest 7-Series evolves the model in a suitably conservative way. Subtly rounded panels, body-side creases, and air-curtain vents smooth airflow over both versions of the car to reduce aerodynamic drag, but it remains a classic BMW in looks. The chrome outline of the "Hofmeister Kink” around the rear-door window disguises a thick roof pillar, but you may even be hard-pressed to distinguish this 7-Series from its predecessor.

It’s an entirely different approach than the Mercedes-Benz EQS, the lozenge-shaped EV luxury sedan that sits alongside the Mercedes S-Class in showrooms. The i7 is a more conservative design, even, than the aging Tesla Model S—which was remarkable on launch for its classic, elegant luxury-sedan proportions.

Inside, the i7 is restrained but elegant, with some unexpected touches. How about a horizontal crystal-faceted trim running across the bottom of the dash that lights up in different colors depending on drive mode? It sounds garish, but our pair of test drivers didn’t find it that way at all. Similarly, crystal-faceted seat position controls on the doors sound gaudy, but somehow work. If there’s a moral, it would be that high-end German luxury is no longer all-black—and all the better for it.

To pretty much everyone’s shock, BMW offers a couple of two-tone paint treatments. The silver-gray over maroon on one test i7 divided reporters: some loved it (“shades of 1986!”) while others loathed it. Definitely an acquired taste.

That conservatism makes the BMW i7’s essential goodness—as an EV—a pleasant surprise. It’s the smoothest, the quietest, and the quickest-accelerating 7-Series model, though the two gasoline versions have their charms. Acceleration from 0 to 60 mph is estimated at 4.5 seconds; not Tesla Performance quick, but suitably fast for this large car.

Usable battery capacity is 101.7 kwh (total capacity is roughly 106 kwh). Both motors are synchronous designs without permanent magnets, meaning no rare-earth metals are required. The front motor is rated at 190 kw (258 hp) of peak power, the rear at 230 kw (313 hp), though BMW cautions they never both operate at maximum output. In other words, don’t sum the two. In steady-state highway driving, the front motor can disengage entirely from the drivetrain, though it will return imperceptibly when needed to maintain speed or respond to driver inputs.

Like virtually any EV, the i7 has smooth, linear acceleration that’s quick off the line. Unless you put it in Sport mode, however, its power is graduated—no “punch in the kidneys” for this executive sedan. The “D” mode on the drive selector mostly mimics the feel of a conventional automatic transmission car when you lift off the accelerator, but the “B” mode delivers higher regeneration and can be used for one-pedal driving right down to a stop. It’s not the most eager initially, similar to the acceleration in “Comfort” mode, but proves effective as it brakes the car to a stop.

The electric power steering is light, and some drivers found it required minor corrections during long corners. The i7 weighs 950 lb more than the 760i—it’s roughly 3 tons—but it wears that weight well. The battery pack under the cabin floor keeps the weight low, letting it dive into corners well. A new-generation stability control system acts 10 times faster and can use the brakes for torque-vectoring. The vehicle software can also direct the front motor to add additional regen, adding to the front end and creating more tire-contact patch. Standard rear-axle steering shortens lower-speed corners by turning the rear wheels up to 3.5 degrees opposite of the fronts.

The gasoline models have a more “natural” feel through turns. They gather their weight better for quick changes of direction, and remain at the top of the class for agility. The effects of the stability control can’t be felt as much, but the steering is just as light. Both electric and gasoline models benefit from standard four-corner air suspension with adaptive dampers, which keeps them relatively level through corners while retaining a silky ride quality.

Unlike previous generations, there's only one wheelbase for all 7-Series models globally. It's long enough to provide a roomy rear passenger compartment. The rear seats are remarkably capacious, though the underfloor battery requires rear-seat EV riders to sit with their knees an inch or so higher than in gasoline models. Four 6-foot passengers could stretch out in comfort.

The widely-adjusting seats are comfortable, and our test car’s Smoke White Full Merino Leather interior lightened the interior’s black trim—as did the full glass-panel roof. A powered sunshade for the roof protects occupants from full sun when needed, a feature not all large EVs have.

Courtesy of the various electronic wizardry, the ride is impeccable. Noise suppression is good—better, in our unscientific judgment, than the Model S or Lucid Air. This reviewer dislikes most synthesized cabin sounds in EVs, so I was surprised by the i7’s rich whir. It’s both pleasant and appropriately muted, good enough that I felt no need to dive for the “off” button (unlike that of the i4). Hard acceleration brings back the whir, as in a gas car, but otherwise the i7 is significantly quieter than its gasoline siblings inside and out.

The flashiest feature in the i7 is the optional 31-inch dropdown monitor on the ceiling, allowing rear passengers to view high-definition video they control from the small video screen on their armrest (about the size of an older mobile phone). It’s quite a setup, and wowed onlookers who saw it.

Over our two-hour test drive, we weren’t able to ascertain much about the car’s range and efficiency. BMW execs, however, are very confident the car will meet or exceed its range ratings for most owners in mixed driving. We heard “underpromise and overdeliver” more than once during the presentations. We look forward to testing that out on longer journeys.

The company cites a fast-charging time of 34 minutes to recharge from 10% to 80% of capacity, with the usual caveats about a preconditioned battery, suitable temperatures, and other ideal conditions. The charge curve shown by the company starts at 175 kw, peaks at 195 kw below 50% state of charge, then falls steadily to the 80% mark.

The 2023 BMW i7 goes on sale in December 2022, but reservations have been strong enough that an i7 ordered today will be delivered in summer 2023.