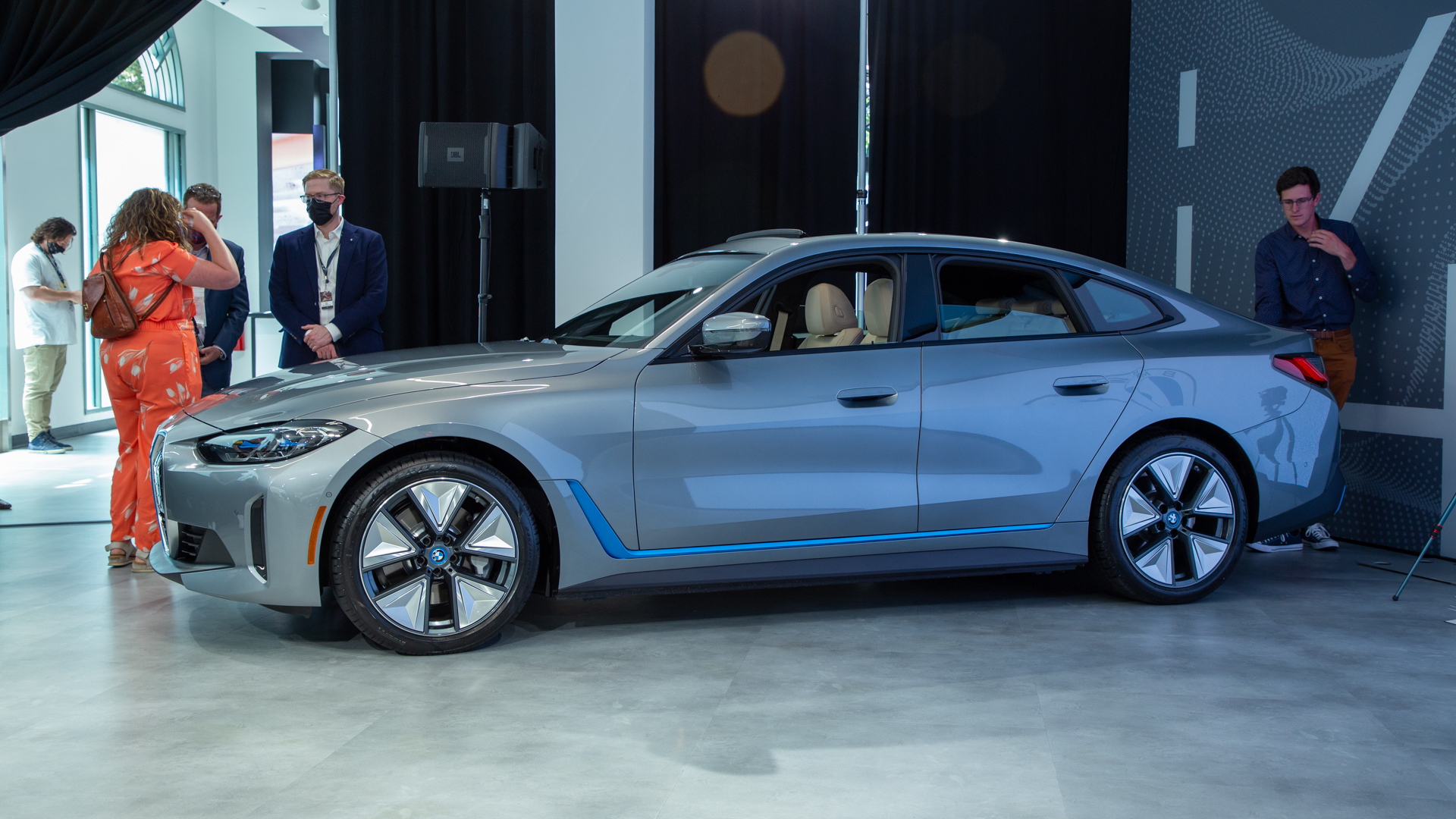 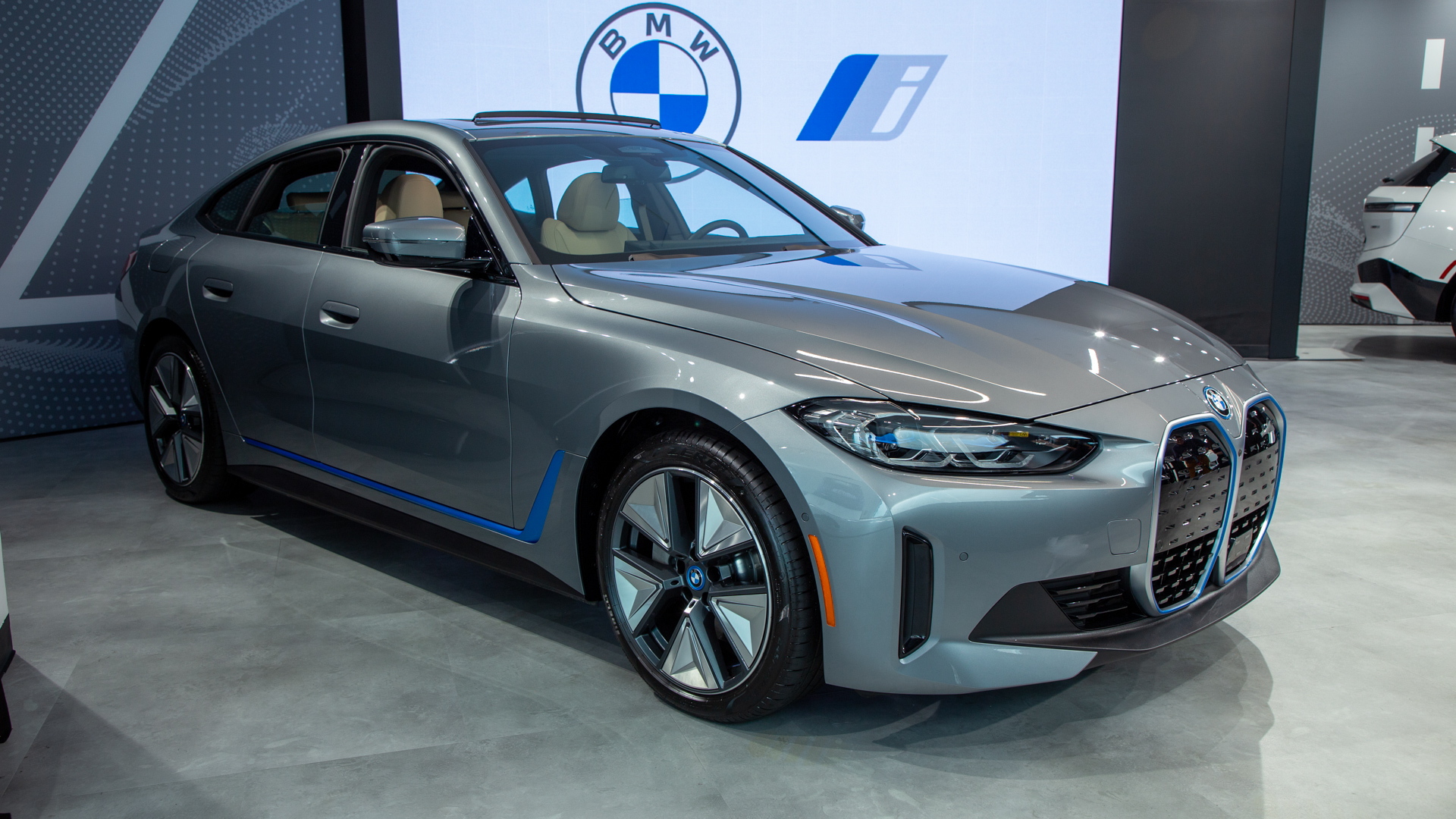 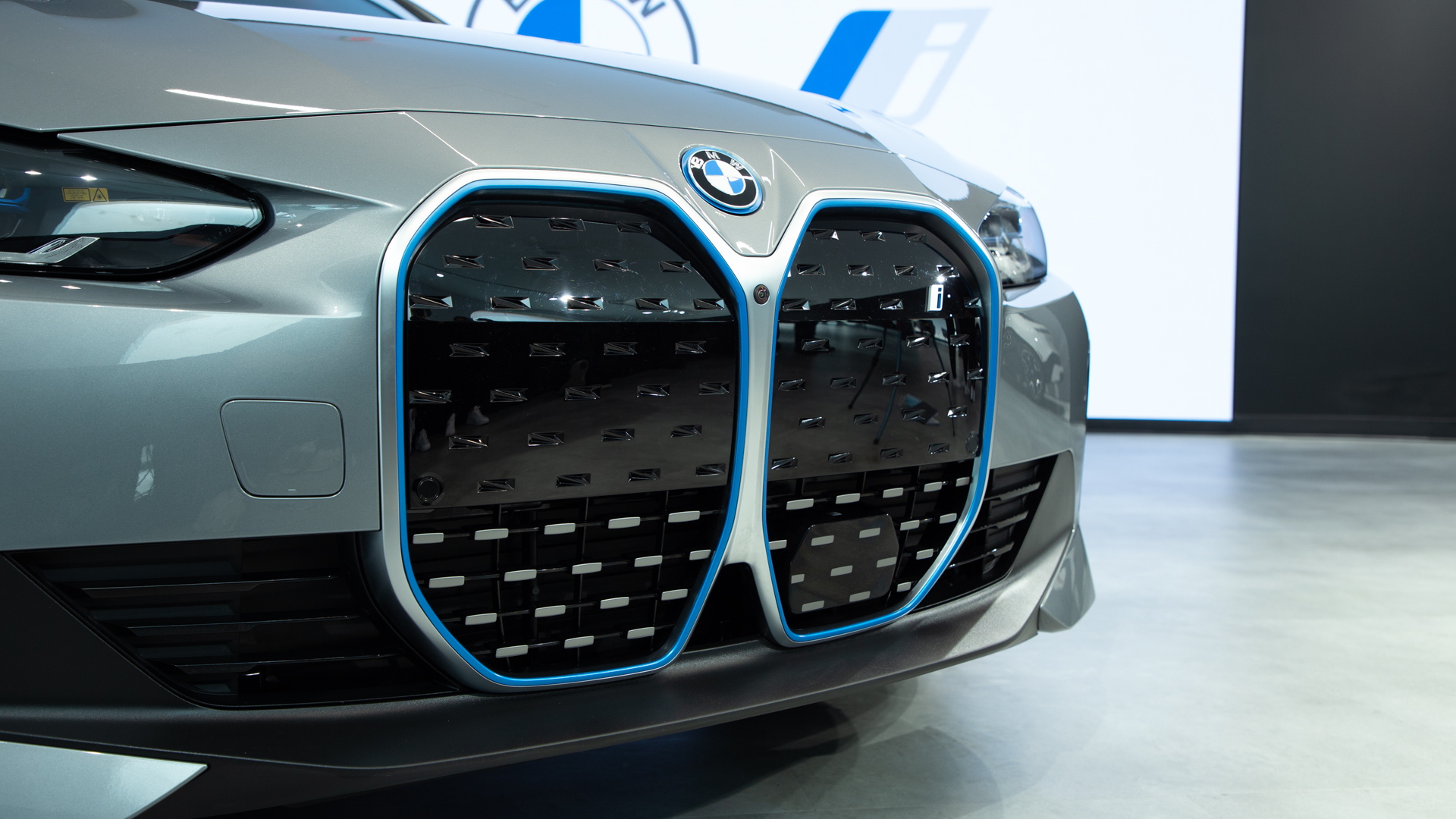 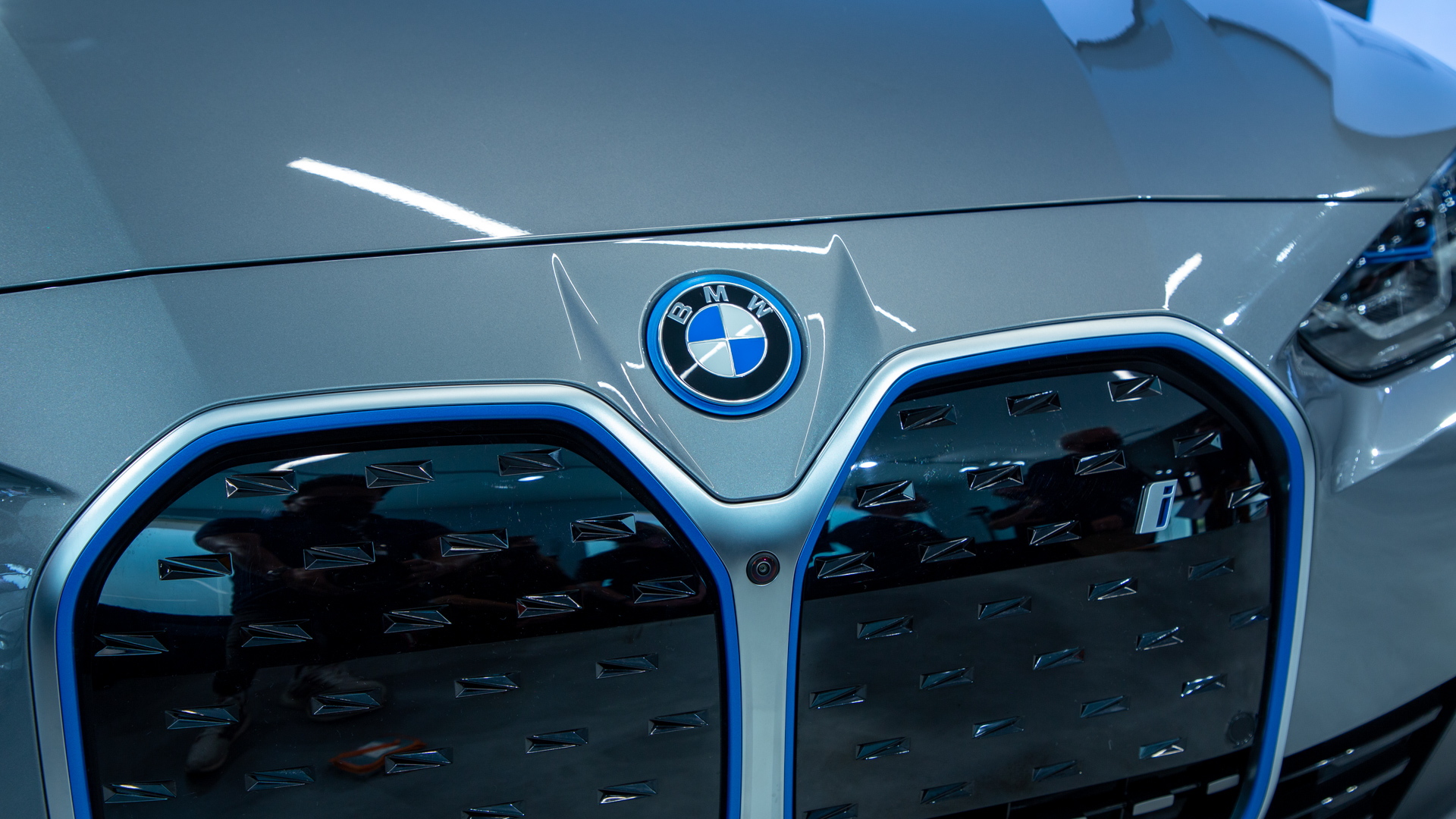 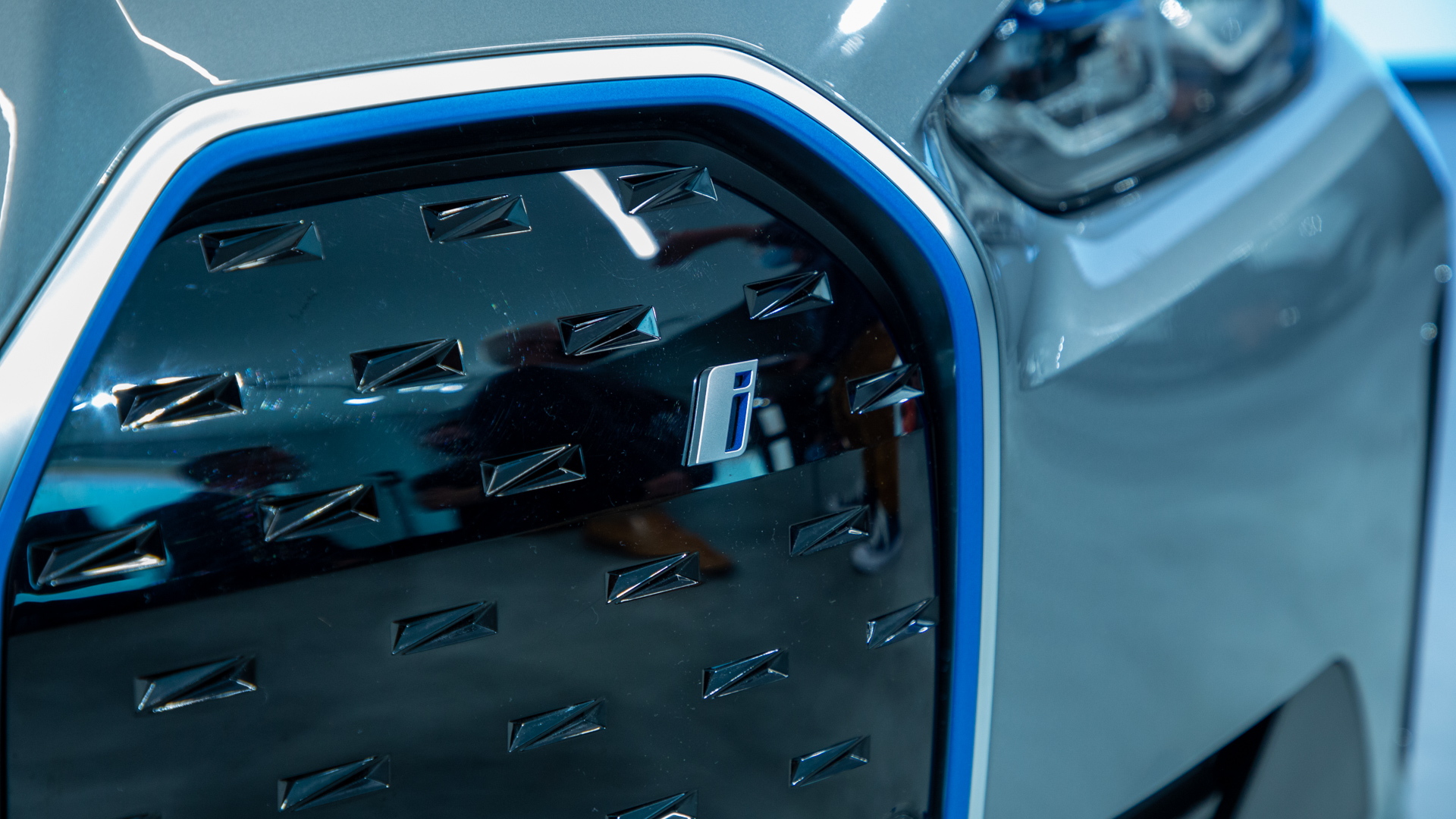 BMW yesterday unveiled its latest pair of electric vehicles, the i4 and the iX which will both launch in the first quarter of next year. Though the iX is the more exciting of the two vehicles with a more upscale interior and bolder styling, the i4 is the car with more of a direct target: the Tesla Model 3. And it was fitting that BMW chose to unveil the i4 in perhaps the Model 3 capital of the world, my home of Los Angeles.

We will have to wait and see how the i4 drives compared to its Model 3 counterpart, but I did get some time up close and personal with the i4 to see how its size and interior space match up with the Tesla.

The i4’s dimensions, as we noted previously, are remarkably close to the Model 3 in every direction. It is 188.3 inches long, 72.9 inches wide, and 57.0 inches high with a wheelbase of 112.8 inches. The Model 3 is shorter at 184.8 inches, but its width (72.8 inches), height (56.8 inches), and wheelbase (113.2 inches) are all within half an inch of the new BMW. The i4 looks noticeably longer than the Model 3, in part due to its sleeker styling versus the Model 3’s bubble-shaped greenhouse even if the two are very close in height.

BMW did not release official measurements for the i4’s interior, but after crawling around it there are a few noticeable differences. The i4 feels very similar (as one might expect) to a gasoline-fueled 4-Series Gran Coupe in both styling and size, for better or worse. Up front, the cars will be similar in terms of usable space, though BMW’s seats are a touch more comfortable.

I found more of a difference in the backseat of the i4, which falls behind in this regard. Legroom is passable for fitting a pair of adults in a line, but the ceiling feels low and there wasn’t quite enough room for my size 11.5 feet to fit under the driver’s seat comfortably. Contrast that to the Model 3, which has similar backseat room by the numbers but feels more expansive than it is with its glass roof and a fully flat floor (the i4 has a significant hump). It’s safe to say that the Tesla offers a better experience for backseat passengers. BMW doesn’t plan to offer a panoramic sunroof on the i4 either.

For cargo, the i4 keeps the 4-Series Gran Coupe’s liftgate, which does give it a slight advantage versus the Model 3’s regular trunk for ease of loading. I’m guessing the BMW will have greater cargo capacity as well when those figures are released.

The two diverge widely when it comes to design and multimedia approach. The i4 features BMW’s newest iDrive 8 multimedia system, which opts for a pair of screens starting in front of the driver (a la Mercedes-Benz) rather than a singular middle screen between the passenger. I found iDrive 7 to be quite good already and this update feels significant on top of that. The slightly curved display bank houses a 12.3-inch information display for the driver and a 14.9-inch multimedia screen immediately adjacent.

I only had a chance to play with the setup for a few minutes, but it felt ready for primetime. Responses were instantaneous, the menu structure is intuitive, and it’s fair to assume it will carry over some of iDrive 7’s most useful features, like wireless Android Auto/Apple CarPlay and a voice command assistant that is actually helpful. Whether or not you prefer this more traditional look and feel compared to the Model 3’s single screen, highly minimalistic approach is a matter of personal preference.

The i4 starts at $56,395 (including destination charges) for the rear-wheel-drive eDrive40 models and $66,895 for the more powerful and performance oriented all-wheel-drive M50. Those starting prices are higher than those of the Model 3, but BMW has federal tax credits remaining to defray some of that premium. If the driving experience matches up to the interior quality and tech savvy of the i4—and, of course the driving range—it presents a real challenge to the Model 3’s hegemony in this class.