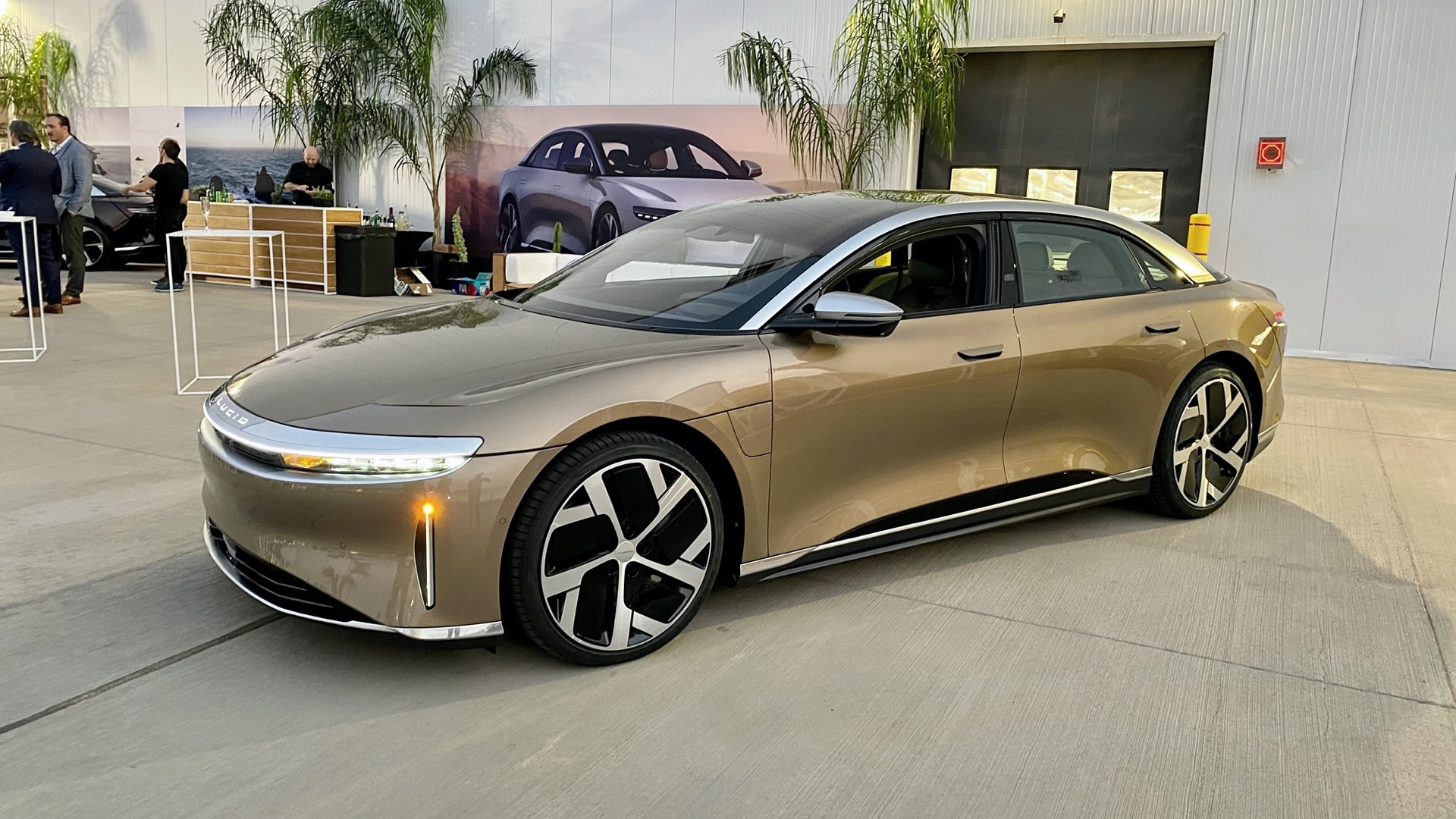 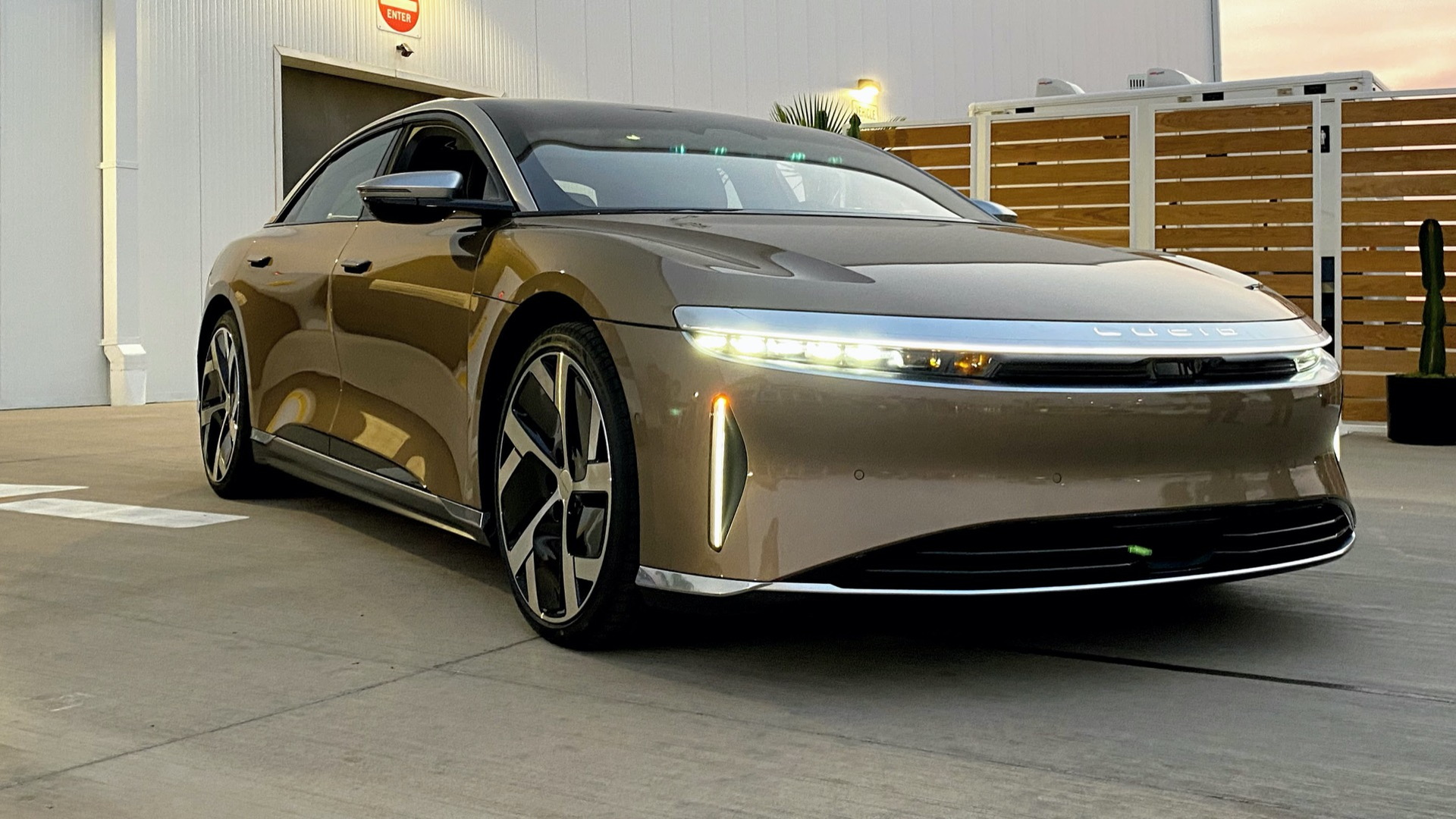 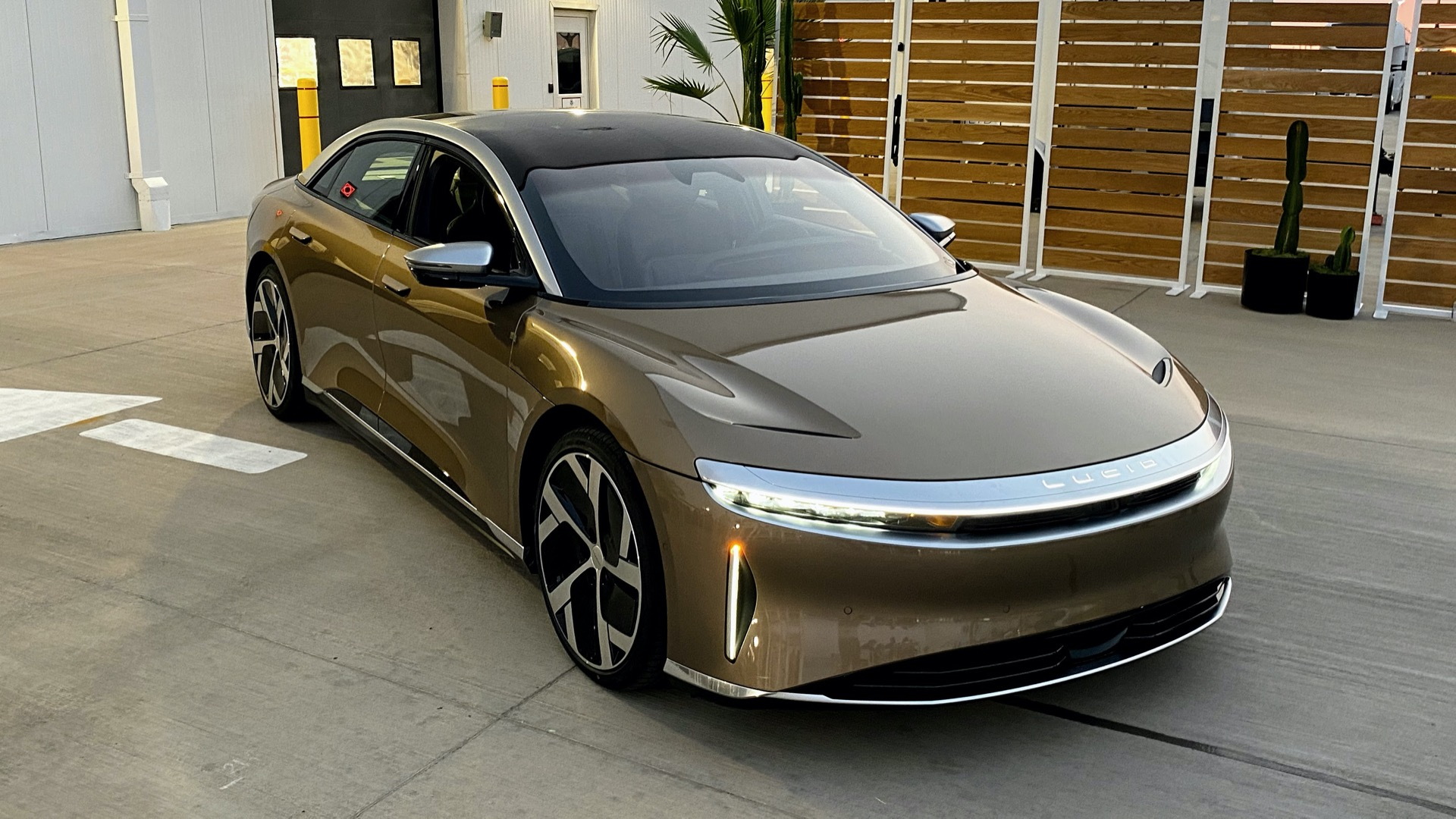 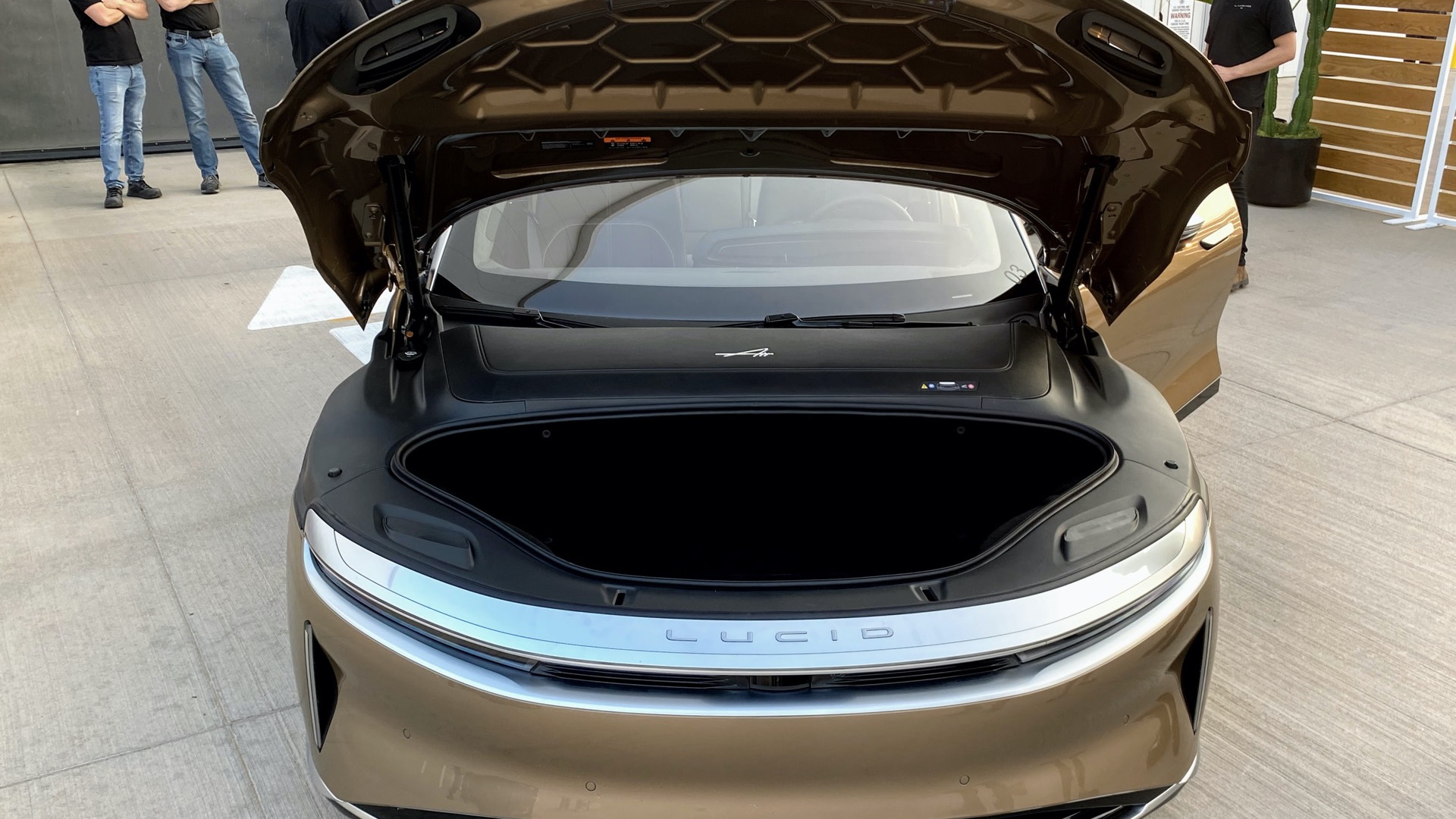 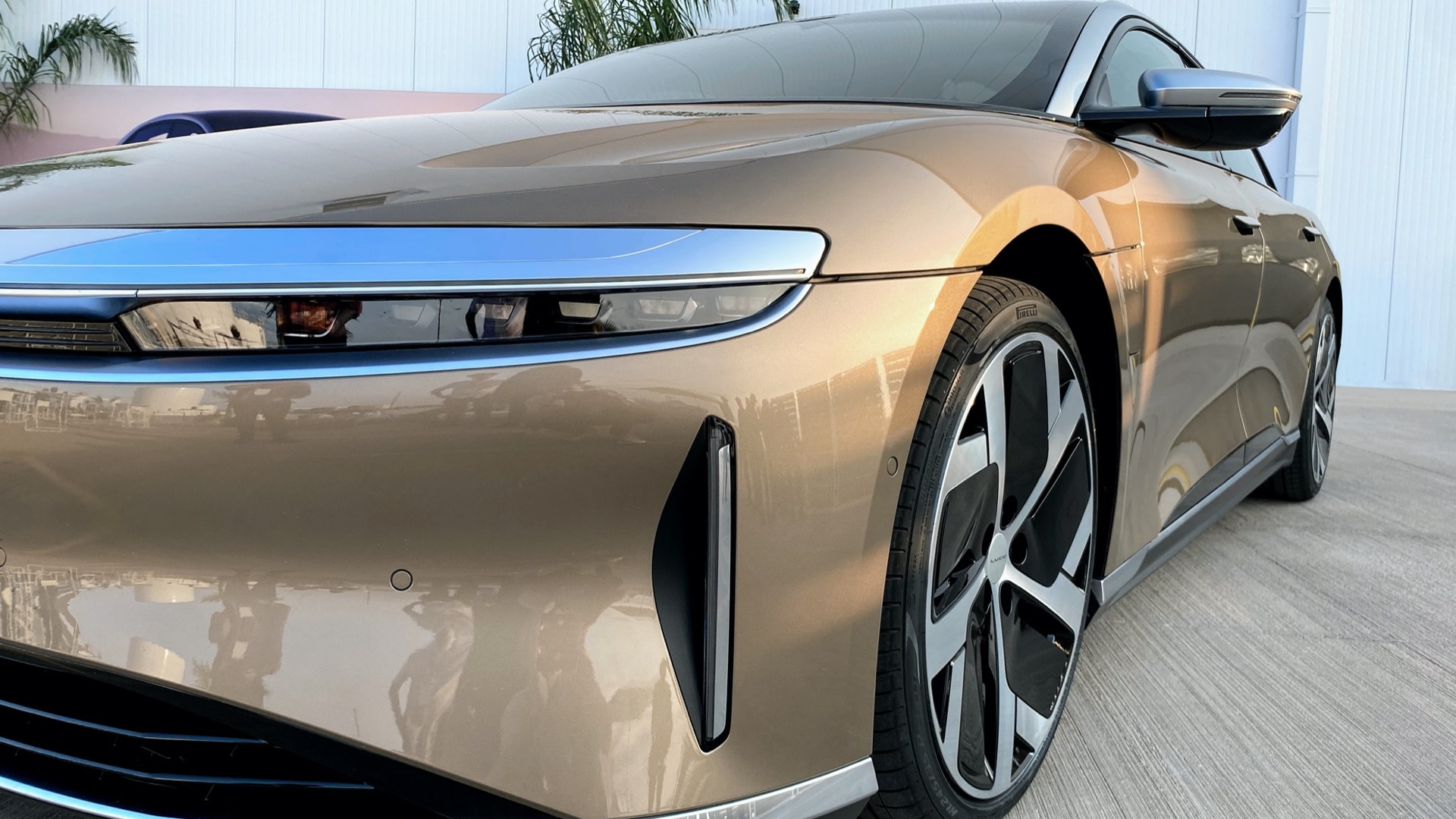 Up until now, those buying premium electric cars have faced a stark dilemma: Either choose the EV that represents the leading edge of performance, range, and efficiency—yes, that would be the Tesla—or choose the EV that’s a more holistic luxury car in terms of features, styling, refinement, and build quality.

The 2022 Lucid Air, with its EPA range rating of up to 520 miles, and its shockingly small, “miniaturized” motors, gearbox, and inverter, should signal a reckoning for Tesla—and it’s clearly rattled its crosstown rival. More than that, it’s the new leading edge for EV technology. The Air doesn’t mimic Tesla’s preeminence, but builds on it with a car that, from our first look, could be even more impressive.

While we’re calling this a first drive, it was more akin to a speed date. My total time in and around the car was limited to about an hour, with less than 30 minutes of actual drive time split between me and a drive partner.

A comprehensive assessment of the car will have to come later. In the meantime, here are a few key observations for the EV-savvy to help distinguish Lucid’s flagship from the rest of the crowd—and from Tesla.

Mind-boggling thrust into triple-digits
I tested the Air in its debut $169,000 Dream Edition Performance form, with the full 1,111 hp, which enables a 0-60-mph time of as little as 2.5 seconds, and a quarter-mile time of 9.9 seconds. My drive didn’t include a launch from a standing start, but it did include one quick burst of, well, more than a few seconds. And separately, from a 10-mph rolling start, I floored the accelerator, arriving at about 80 mph in three-something seconds. From a brief sample, the Air’s propulsion system has a sharpness and eagerness at nearly triple-digit speeds that I’ve never before felt in an electric car—yes, the Porsche Taycan and Tesla Model S included, although I haven’t yet driven the Model S Plaid.

Tuned for comfort and fun
Based on this short introduction, the ride and handling are a most pleasant surprise. The feel is fluid yet tidy. Heading into a decreasing radius exit ramp, the front end loaded up predictably and on the exit I could feel just a bit of weight transfer to the back. If I would have had an open stretch of tarmac like a skidpad, I would have tested if the Air is as willing to send power to the rear as it teases. A car with a curb weight of 5,050 pounds isn’t going to be a rally racer or autocross champion.. However, given this small sample, it appears the Air will still manage to be fun.

The Air has no air suspension
Pausing to look at the layout for a moment: Lucid considered an air suspension, like what’s used by Tesla in the Model S, but decided against it, mostly for one simple word that kept coming up: predictability. Lucid explained  a coil-and-air-spring setup has hysteresis, or lag, which started to lead to compromises in the damping that would affect ride and handling.

We like the isolating yet responsive configuration the team came up with instead. The Air has a five-link strut front suspension, with an integral-link setup in back, with solenoid-controlled active dampers at all four wheels. The five-link front arrangement was added late in the Air’s development and was designed to purge torque steer and make sure that understeer and weight transfer stay the same whether in regenerative braking or foundation (friction) braking. The Air has a mechanical variable steering rack that  has a very confident, easygoing feel on center.

No need for launch mode—but maybe fast-charge preconditioning
Buyers won’t need  any special workarounds or special conditioning to rip off 2.5-second 0-60 mph runs. They’ll just have to activate  Sprint mode and have more than a half a charge. There are no limits on repeatability either.

Fast-charging can actually be more demanding on the battery, and owners may need to precondition the car, with interface details yet to be announced. The Air has the fastest DC fast-charging in the industry, at an actual 300-kw peak charging power. Don’t get this confused with other EVs that list compatibility with 350-kw fast-charge connectors; the Air makes darn close to the most of it. At a consumption of 4 miles per kwh, Lucid says that amounts to up to a 1,200-mile-per-hour peak charging speed. Or, in terms of actual charging stops, 300 miles added in 20 minutes.

This car has presence
The Air can be a bit of a chameleon in pictures, but I can assure you that up close, in person, it has a presence unlike any vehicle. Despite having some of the best aero in the industry (at just 0.21 Cd), it doesn’t resort to the usual lozenge-like “kammback” design. In front, the thin micro-lens array headlights and smooth, low hoodline look aircraft-inspired, while the French curve arches around the back tuck into a signature look unlike any other from the rear. I've described the size and look as an elegant Dodge Charger as reconceived by Citroën, but that's only the superficial part.

True to that first-class cabin cliche
If the 520-mile range isn’t enough of a hint, the Air feels conceived for those who enjoy driving—even all day. At 195.9 inches long, 76.3 inches wide, and 55.5 inches high, and riding on a 116.5-inch wheelbase, the Lucid Air is within an inch and a half of the Tesla Model S in every exterior dimension. Although the back seat requires taller people to duck their heads when getting in,, that’s the only exception to the impression that the Air feels quite a bit roomier inside than the Model S inside, especially in back. The unparalleled Glass Canopy roof brings plenty of light and a feeling of space. The trunk is roomy, with a flexible cover that can conceal a deep well at the rear. You can fold the split rear seatbacks forward to fit  larger items, or use the pass-through. Plus, Lucid claims the frunk is the largest of any electric car. Numbers are forthcoming.

Up front, there’s loads of leg room, and the seats offer a wide range of adjustability good for me, at a long-legged 6-foot-7. Lucid also provides seat cooling and a massage feature that I could especially feel at my mid-upper back. An optional Executive Rear Seating Package is on the way, adding what amounts to two first-class aircraft cabin seats.

No eco-car calling cards, but lots of drive-mode choices
While you might be in the longest-range EV on the market and one of the most efficient, the Air doesn’t constantly boast about it to the driver. There’s no especially efficiency-focused mode at the moment. Drivers do have choices—between three drive modes: Smooth, Swift, and Sprint, with two settings of regenerative braking that apply to each mode. Independently, you can select Hold mode or Roll mode for what happens when you reach a stop (with the former automatically applying the friction brakes when you do), and you can toggle idle creep on and off to change the car’s behavior when you lift off the brake pedal. And, to be explored later, perhaps on a track or skidpad, a Stability Off mode turns off the nannies while still allowing rear torque vectoring.

Setting the interface for a brand
The Air’s instrument panel keeps critical information high, not far from the line of sight. The font used on all the displays—clear white letters against a charcoal background—is easy to read quickly and easy on the eyes.

A 34-inch-wide glass cockpit screen arcs smoothly in front of the driver. Split into three subscreens, it includes a gauge screen directly in front of the driver, media and communication displays up at the far right (smartly not far from the line of sight of the road ahead), and various accessory switches and controls on the left side. The lower screen, called the Pilot Panel, houses things that you might access when at a stop—deeper climate controls, drive modes, navigation, charging, and more. That whole panel is retractable, while physical hot-buttons for temperature, fan speed, and volume sit up top, in place no matter what.

Otherwise, much of the switchgear is familiar. You pull the shift lever down to engage drive, up to engage reverse, and press in for park, just as in a Mercedes-Benz. A few of the controls are unnecessarily odd—like the mirror adjustment that requires repeatedly tapping four directional button areas on the screen instead of simply dragging a finger in the direction of adjustment.

The sound of 1,111 hp: Barely a whisper
Despite its shocking output numbers, the dual-motor system is near-silent inside the cabin and even at full rip emits only the faintest airy whistle, without motor or gear whine. Wind noise, which can be noticeable in EVs, is also equally absent in this sedan, which has a remarkably low 0.21 coefficient of drag. My only minor gripe regarding noise was that, from the back seat, I heard more road noise—a “patter” on concrete from the wheel-well area—than I’d expect in a luxury flagship.

Two-pedal driving, but with lots of regen
The Air offers up to 0.3g of regenerative braking. That’s a rather aggressive amount of regen when felt at speed, and enough to slow the car to nearly a stop in most situations. You won’t find steering-wheel paddles or gear selectors offering more temporary regen. Based on what I saw in a few limited stop-and-go situations, you’ll need the brake pedal for the last few feet. Lucid doesn’t subscribe to brake-blending. As with Tesla, it’s a top-level philosophical choice: When you press the brake pedal, you’re using the friction pads.

DreamDrive watches you
Lucid boasts that because its DreamDrive driver-assistance system uses high-res Lidar (and 32 sensors in all, including cameras and radar and ultrasonic units), it works in almost all weather conditions. One of those cameras monitors driver attention, and for now the system alerts the driver after 15 seconds but won’t cut off assistance as long as it sees that the driver is still paying attention. Although that’s subject to a final tweak in production, it cuts out the games like tying weights to the steering wheel.

Takeaways
We’ll be able to fill in many more details after a lengthier drive opportunity. For instance, I didn’t listen to the sound system at all, and the Air is the first production model from any brand with Dolby Atmos, as part of 21-speaker immersive audio. I also didn’t try Apple CarPlay or Android Auto, both of which are compatible with the infotainment system, or use Amazon Alexa for voice commands. Because these were pre-production demonstrators finnessed to woo media, analysts, and reservation-holders, I’ve withheld discussing things like materials and assembly quality—although so far the Air looks on the mark for a rival set that will include the Mercedes EQS.

We hope in coming months to provide some real-world accounts of the Air’s range and efficiency, and tests of its charging numbers, which are better than those from Tesla.

The Lucid Air offers range and charging at the leading edge, but its appeal goes well beyond its tech leadership. Elegant and understated, yet playful, the Air is likely the first of many glorious cars from a new automaker. Just a short spin told us that much.