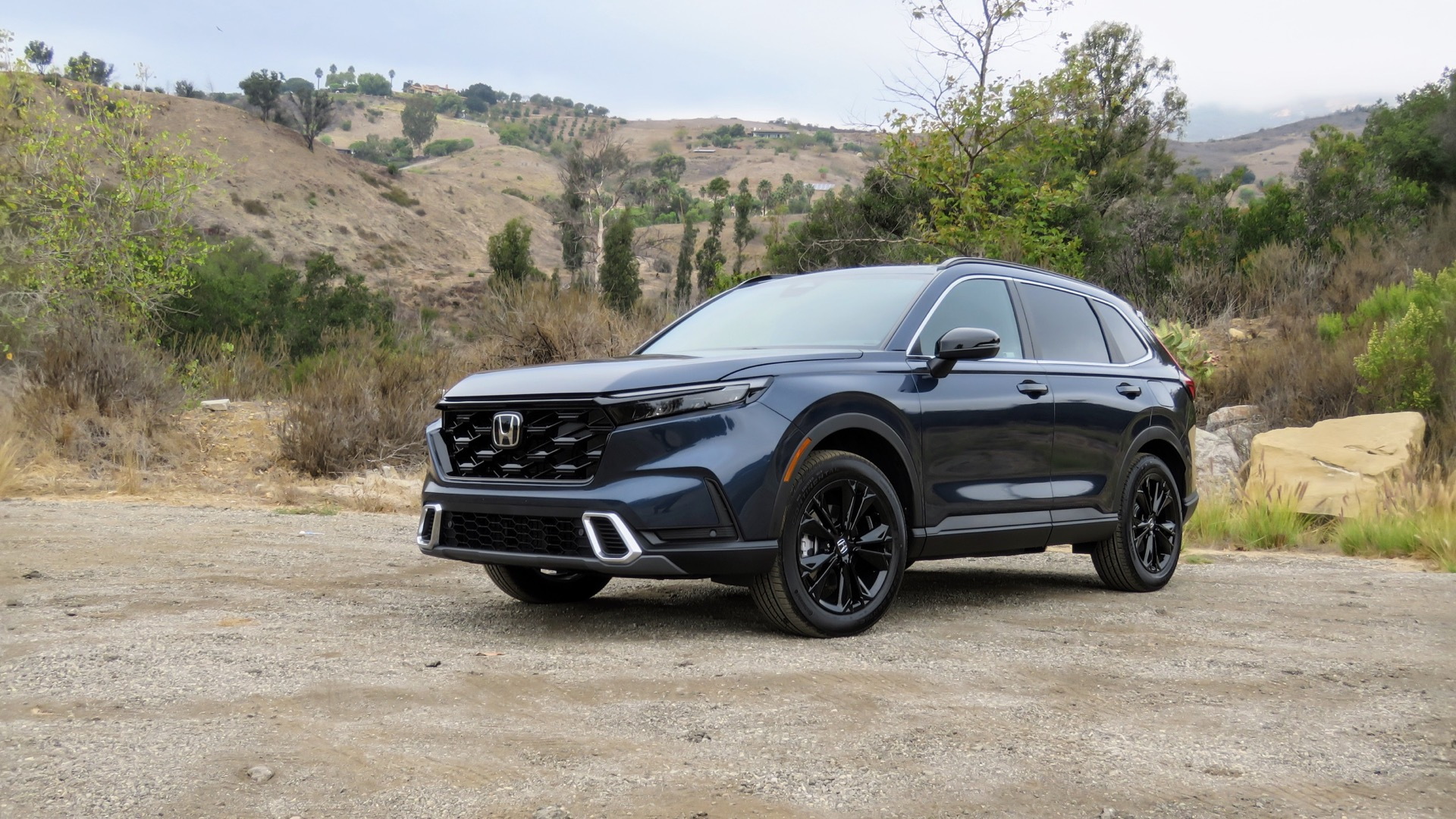 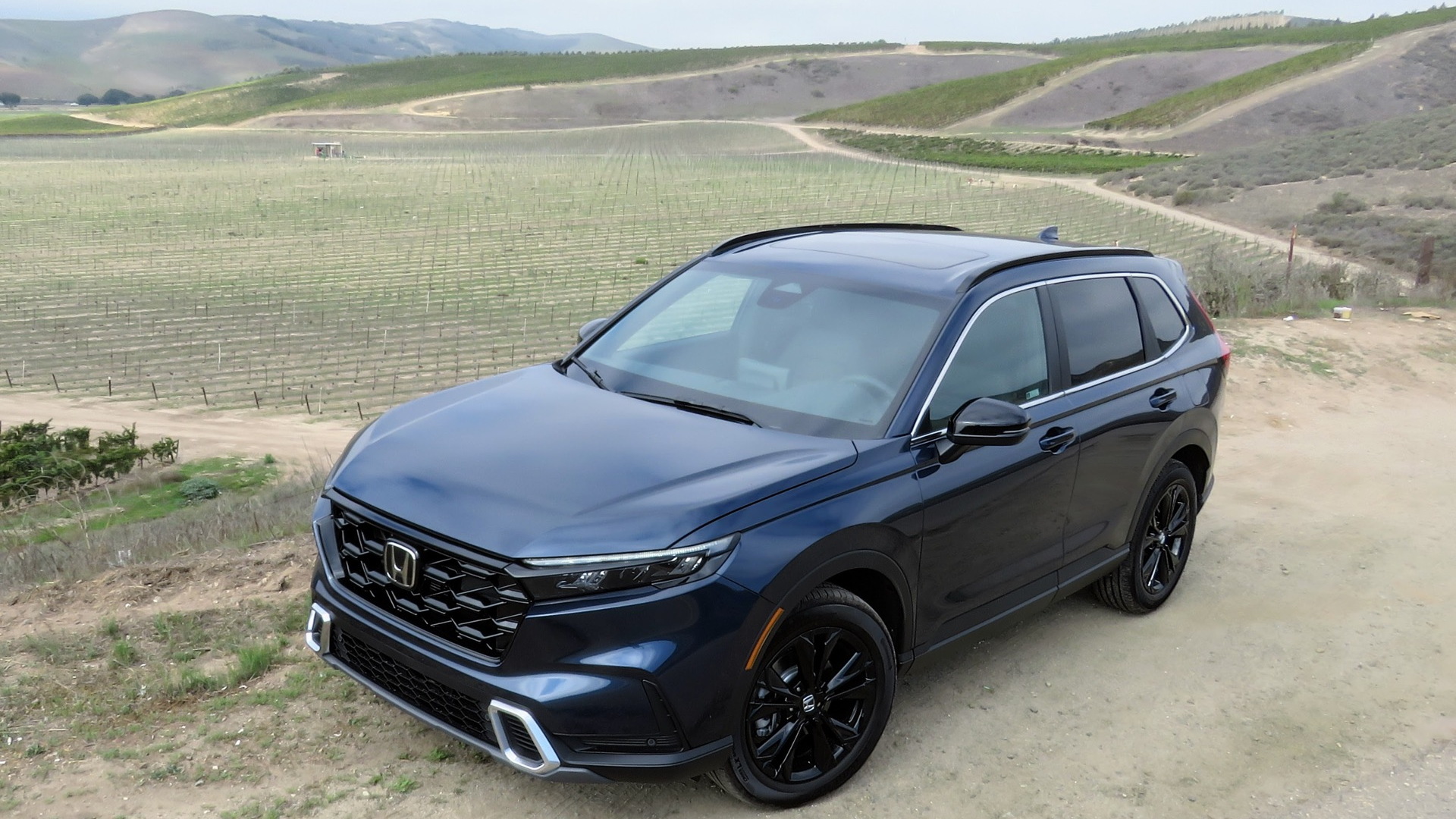 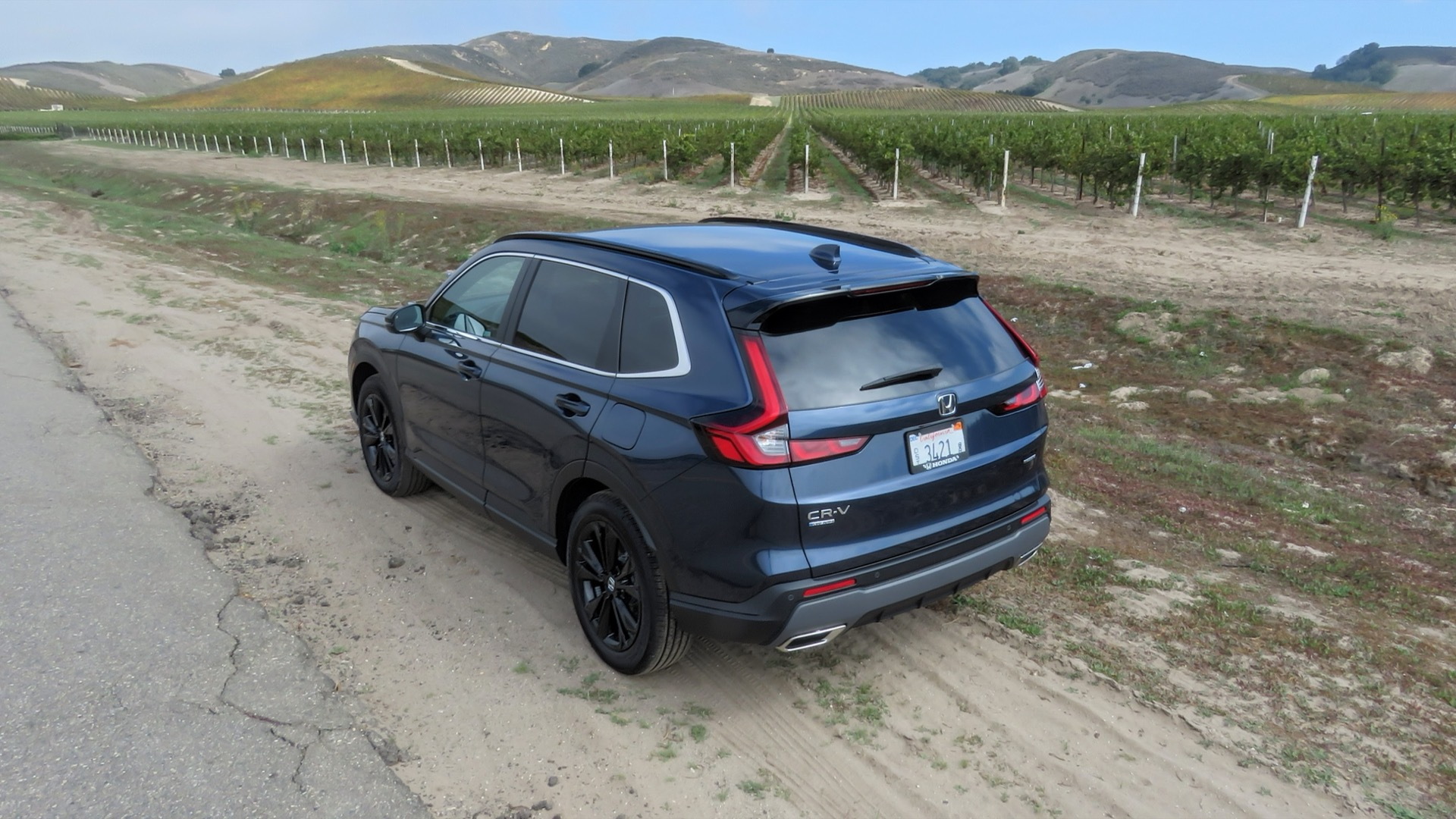 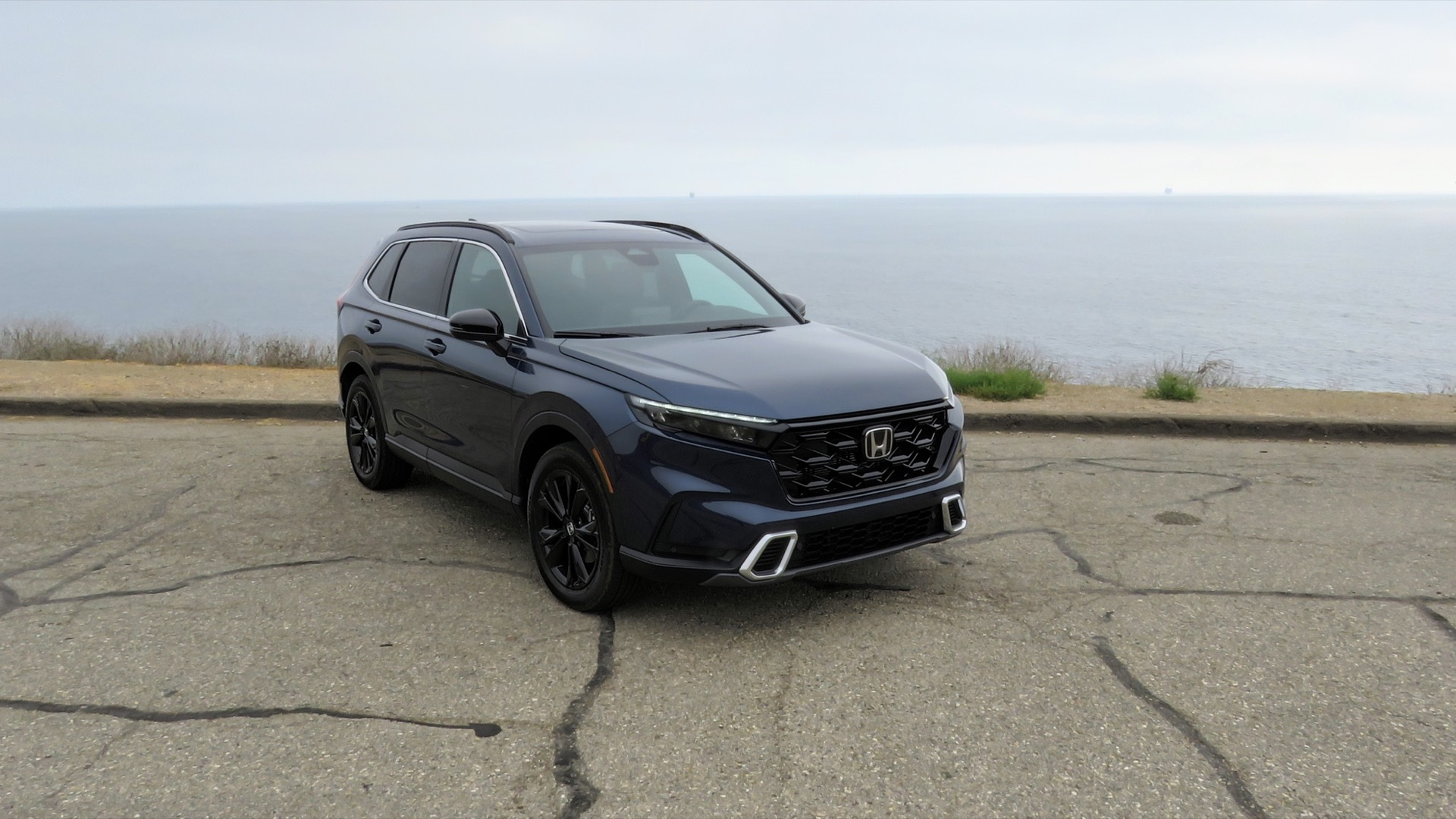 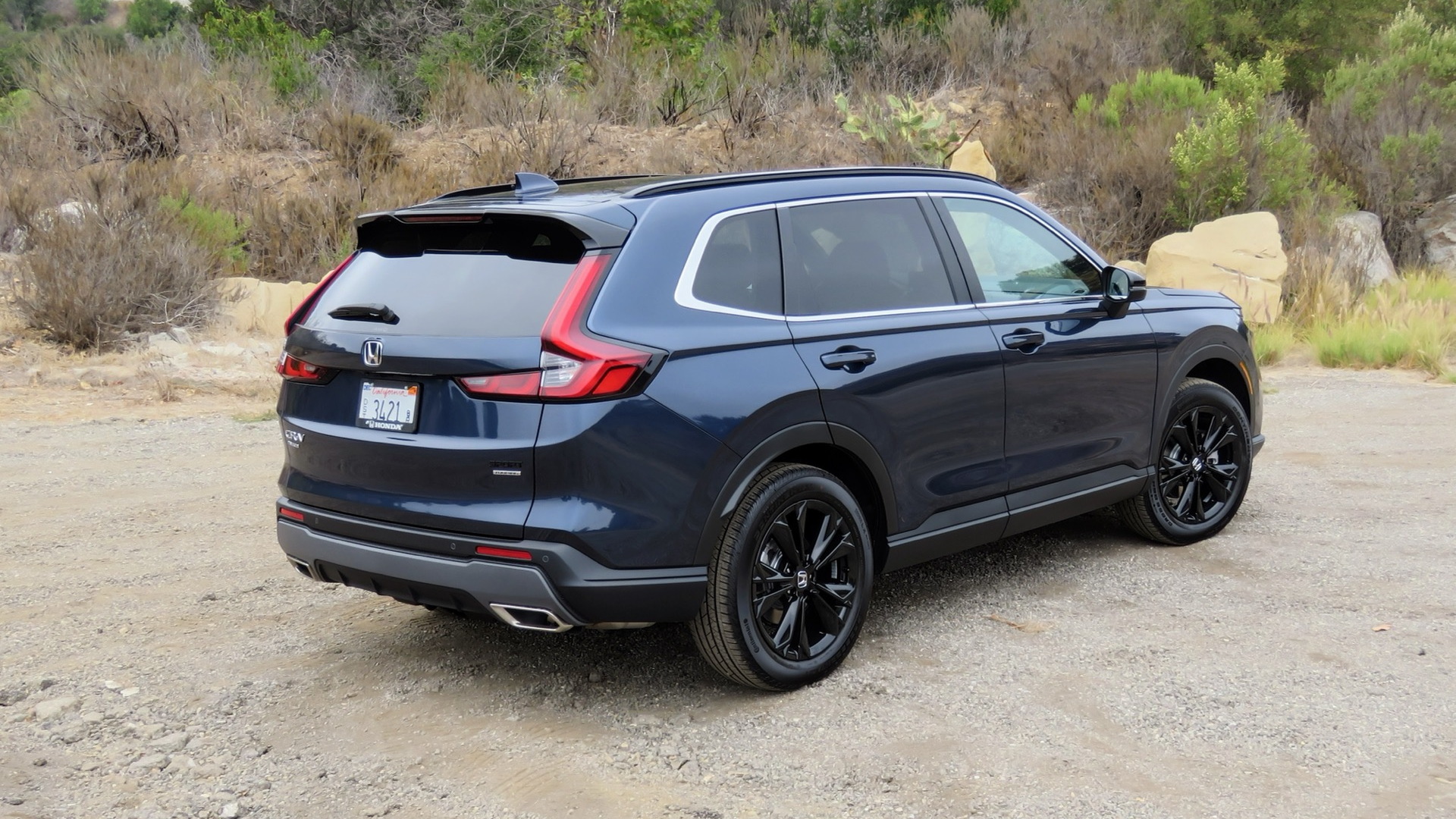 Honda sees the 2023 CR-V Hybrid as its on-ramp to electric vehicles for the U.S., and it’s gone so far as to say that it sees a good many CR-V Hybrid drivers making a leap to its upcoming fully electric Honda Prologue EV in a couple of years.

After spending most of a day driving this latest and greatest CR-V Hybrid this past week, I’m not entirely convinced this most excellent Honda makes clear connections to electric. But I’m convinced that it’s now the best CR-V in nearly every respect and that Honda will easily sell half or more of its CR-Vs as hybrids. Even from a drivability and usability standpoint, for those who can’t yet shift to plug-in vehicles, It’s hard to imagine getting any CR-V that isn’t a hybrid.

Honda says that it’s gone for a more electric driving experience for the CR-V this time. It delivers one with stronger electric motors and a broadened electric range—including new towing ability—but ultimately with a decidedly gasoline-vehicle twist.

The messenger, not entirely on message.

If Honda is segueing to EVs here, it’s still humming the tune of internal combustion. When accelerating rapidly, the hybrid system now “shifts” in steps, crisply dropping the revs as if it’s changing gears. It’s all an illusion though, as accelerating at those rates doesn’t involve any connection to the wheels at all; the CR-V’s two-mode configuration continues to function as a parallel-hybrid system in most acceleration situations, with the engine functioning as a generator, charging the battery and delivering electric power to the wheels via a traction motor. The engine is, as before, effectively clutched to the wheels only at low-load boulevard or highway-speed cruising.

The change effectively makes the driver more aware of the engine; instead of having it rev up and down, somewhat disassociated from acceleration, it’s now pretending to be more connected to it. It’s a head-scratcher.

Adding to that ICE awareness: Shift the drive mode to Sport, as you would for a curvy road and the sharpest performance, and the engine and those “shifts” are amped-up through cabin speakers with Active Sound Control—an altogether raspy sound that resembles a tuner-car resonator. Think more obnoxious than inspiring—and it can’t be switched off.

The outgoing CR-V Hybrid’s EV mode button, and its theoretical stealth to arrive home and keep the engine at bay, is also gone. Honda has also eliminated the battery level gauge, although you can still tap into it through touchscreen menus and the Power Flow screen.

Smoother, perkier, and lives up to its premium positioning

That mixed message aside, Honda’s two-mode hybrid system has indeed gotten better. It’s always felt the most electric of them all, and it’s been our choice for all-round drivability—with fewer moments of indecision than Hyundai’s one-motor system in the Tucson Hybrid, and less of the rubber-band feel that can make Toyota’s planetary hybrid system in the RAV4 Hybrid less charming at times.

To fit the new premium thrust of the hybrid system, Honda has separated its CR-V lineup into two tracks. The standard CR-V is now powered by a 1.5-liter turbo-4 engine and CVT, while the CR-V Hybrid gets a new version of Honda’s two-motor hybrid system. Honda has positioned the lineup such that versions with the hybrid system are now positioned as sportier options. Even in trim name, it’s emphasized as such: Sport and Sport Touring for the hybrid, versus EX and EX-L for the standard versions.

The trim levels aren’t just marketing smokescreen. To make the hybrid system sharper and more responsive, with more torque accessible at lower speeds and more horsepower available at higher speeds, it revisited the layout of the two-motor system, moving the two motors away from the same axis, and sized them both up. The new mechanical arrangement isn’t as elegant for packaging—even though Honda’s managed to downsize the power unit—but it allows the motors to operate at different ratios, bulking out the torque curve.

You can tow with the new hybrid system—just 1,000 lb, but it’s enough for a pair of ATVs (or e-bikes). And to allow the towing, Honda has further tweaked the configuration for more engine braking.

While some earlier iterations of this system tended to “cycle” back and forth between power sources at typical American freeway speeds, this system now appears to keep the engine locked to the wheels for longer periods, resorting (in Normal or Econ mode) less to revving the engine for minor grades.

The gasoline engine itself is also completely new—a direct-injection, Atkinson-cycle 2.0-liter inline-4 that makes modest improvements in power and torque throughout the rev range. It’s now at 145 hp and 138 lb-ft of torque, while the figures that matter are the output numbers for the hybrid system: 204 hp, 247 lb-ft of torque.

The CR-V Hybrid is vastly improved in terms of smoothness and refinement, and there’s no one particular thing to point to. For the powertrain, a flywheel pre-damper helps with low-load vibration, engine intakes have been redesigned for noise, and the engine itself is stiffer, with a more rigid crankshaft, adding to the sense of refinement when it’s revving into its upper ranges.

With the new configuration, Honda has also been able to boost efficiency. In front-wheel-drive form, the CR-V Hybrid achieves EPA ratings of 43 mpg city, 36 highway, 40 combined, while AWD versions get 40/34/37 mpg. I averaged 33 mpg according to the trip computer over a 142-mile round-trip route that included varied speeds and terrain and included some altitude gain. I drove in a mix of styles to get the best sense of what families with several drivers might see, including a near equal split between Sport, Normal, and Econ modes.

Efficiency at U.S. highway speeds—especially from 70 mph and up—has never been a strength of the Honda hybrid layout, and anecdotally that doesn’t appear to improve with the revamped system. Easygoing city driving, of the sort I didn’t do much of, will likely carry over as its forte.

Full disclosure on all of these efficiency observations: My test car was truly brand-new—fresh off the transporter truck, with 61 miles on it when I started.

The CR-V has been fully redesigned for 2023, and it’s significantly larger. Overall length is up 2.7 inches, to 184.8 inches, and wheelbase is at 106.3 inches—1.8 inches longer than before. Width and height are up modestly, too.

Kudos to Honda for not just making the CR-V larger, but doing so without any significant weight gain. It’s also seized the opportunity to get smarter with packaging throughout, and thus the latest version feels a half-size larger inside—truly as large as the Pilot felt just a few years ago.

So, so roomy inside

This is a fantastic layout for those planning to use the back seat for adults, or for those loading child seats in. While official numbers don’t always show the full picture, I’m 6-foot-6 and can sit behind myself with plenty of leg room and knee room in back—as well as a couple of inches above my head. The rear back rest reclines to several positions, and the true game-changer in back is doors that open *very* close to 90 degrees—allowing far easier loading of child seats than you’ll find in just about any other vehicle.

Thanks to the very low cargo floor, the CR-V offers 36.4 cubic feet of space, expanding to 76.5 cubic feet with the rear seatbacks folded.

Intentional engine sounds aside, the cabin itself is very quiet; the Hybrid gets Active Noise Control that works to cut powertrain, road, and tire noise.

Overall this CR-V is night-and-day different in its ride quality. Versus the outgoing model there’s far less jostling and minor roughness from the road making its way into the cabin, and the initial impression is that it’s softer, although when pushing it harder in corners and quick transitions, that doesn’t prove true. The Hybrid also does especially well in its rebound damping and the ability to quell secondary motions after a big heave.

Steering feel just off center is much improved—thanks in part to a repositioned steering-rack shaft and more rigid front and rear subframes. Honda emphasizes that the CR-V is no longer Civic-based as might be said in the past; it shares and borrows some pieces with the range of Honda models.

Honda offers four levels of brake regen. Selecting D is designed to feel like a non-hybrid, with very gradual deceleration, while pulling the shifter back to B instantly takes you to the third level of regen (my preference). You can toggle through them all at any point with steering-wheel paddles. Separately, there’s also now Hill Descent Control, allowing predictable control on inclines of 7% or more, at 2-12 mph, and an auto-hold button gives you the option for what happens after you come to a stop.

It’s further tweaked to your expectations through Normal, Sport, Econ, and Snow modes, but the Hybrid always defaults on startup to the Normal mode. New with this CR-V Hybrid is a feature that will do a little more advance planning to maximize electric driving—and efficiency—when navigating to a destination, taking into account terrain. In that, as well as in Econ modes, the system makes available a bit more of the battery capacity, still at about 1.4 kwh.

Difference between modes mostly comes down mostly to throttle sensitivity. You’ll be able to keep the engine off more of the time in Econ because it allows more minute control of the accelerator.

All-wheel-drive versions of the CR-V Hybrid, as before, employ a propshaft to the rear wheels—just like non-hybrid versions—but they now send up to 50% of power to the rear, versus up to 40% in the outgoing generation.

The Hybrid Sport gets gloss-black exterior accents, Berlina Black 18-inch wheels, and rectangular exhaust finishers—yes, another nod that perplexingly seems to be highlighting the combustion side. The top Sport Touring adds a whole bunch of equipment, including a 12-speaker Bose audio, a navigation system, and a wi-fi hotspot, plus 19-inch wheels and tires.

Honda offers 7.0-inch (Sport) or 9.0-inch (Sport Premium) touchscreen infotainment systems with standard Apple CarPlay and Android Auto (wireless with the larger screen). Sport Touring models also include a wireless device charger, and two USB ports (one A, one C) are located right in front where you have options on where to set devices of various sizes.

The safety feature list is impressive, too, with automatic emergency braking, blind-spot monitors, rear side airbags and knee bags all included. I also applaud how the CR-V Hybrid has normal, well-placed mirrors and great outward vision overall—thanks to the thin, strong pillars—altogether making it easy when parking to place the corners of the vehicle.

Ultimately, Honda sees the big growth areas for hybrids as being in the West Coast and Northeast, while EVs represent more of an opportunity in some southern states.

Will those buyers want a CR-V Hybrid that maximizes the electric side but speaks the language of a gasoline vehicle? Yes, it’s a ‘tweener, but it’s the kind of mainstream that could do a lot of good.

Honda paid for travel so that we could bring you this test drive review of the 2023 CR-V Hybrid.