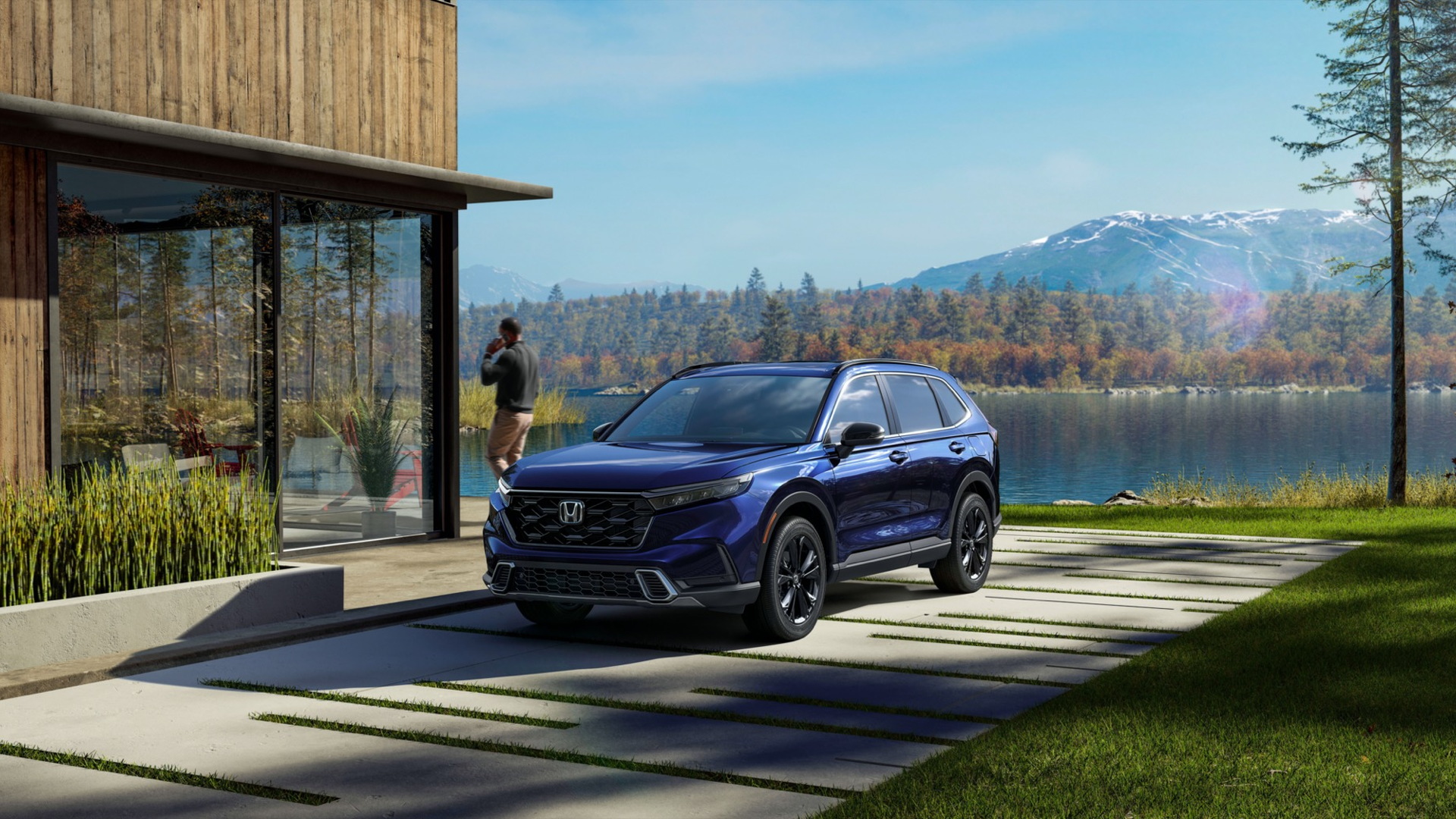 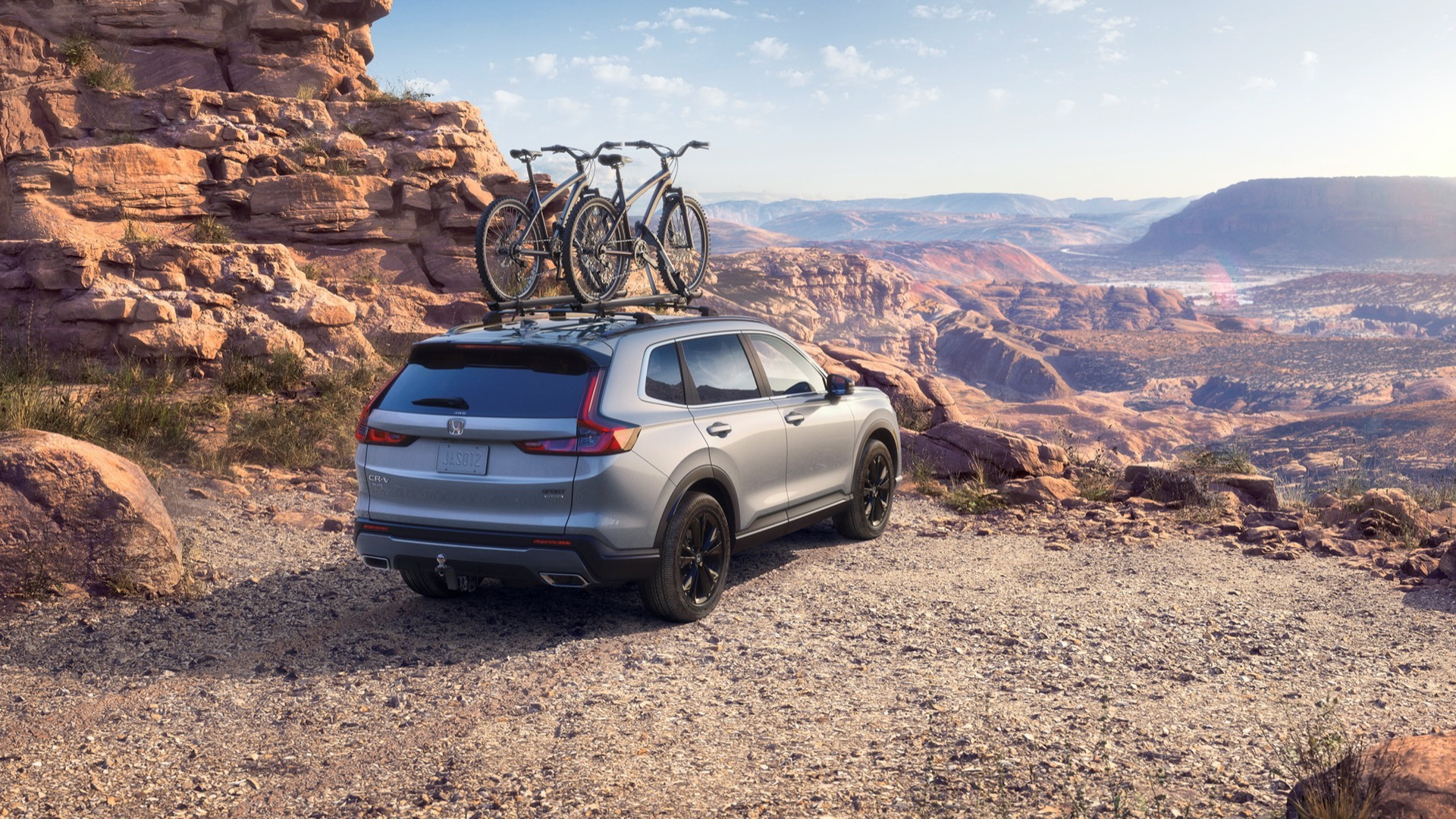 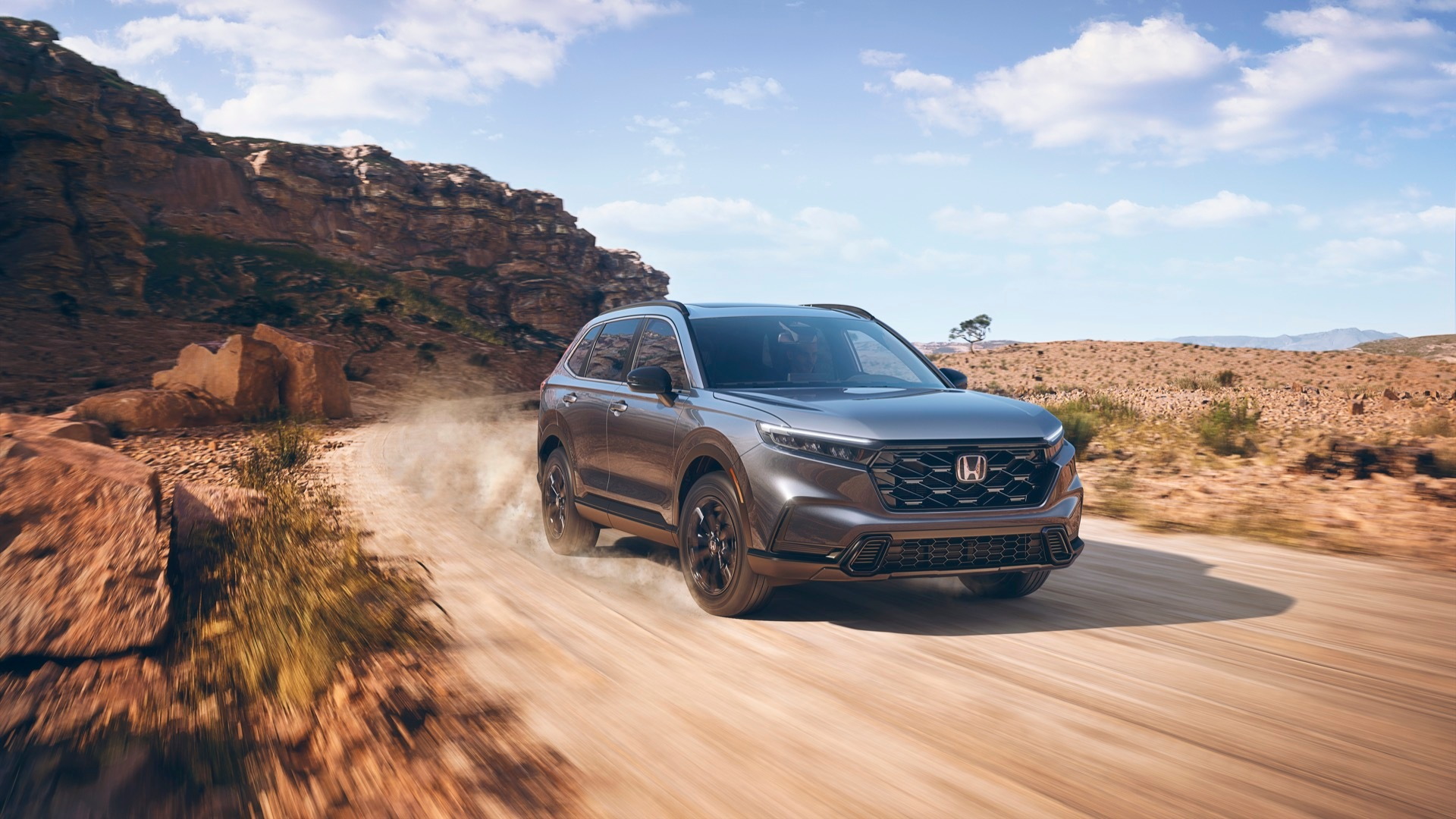 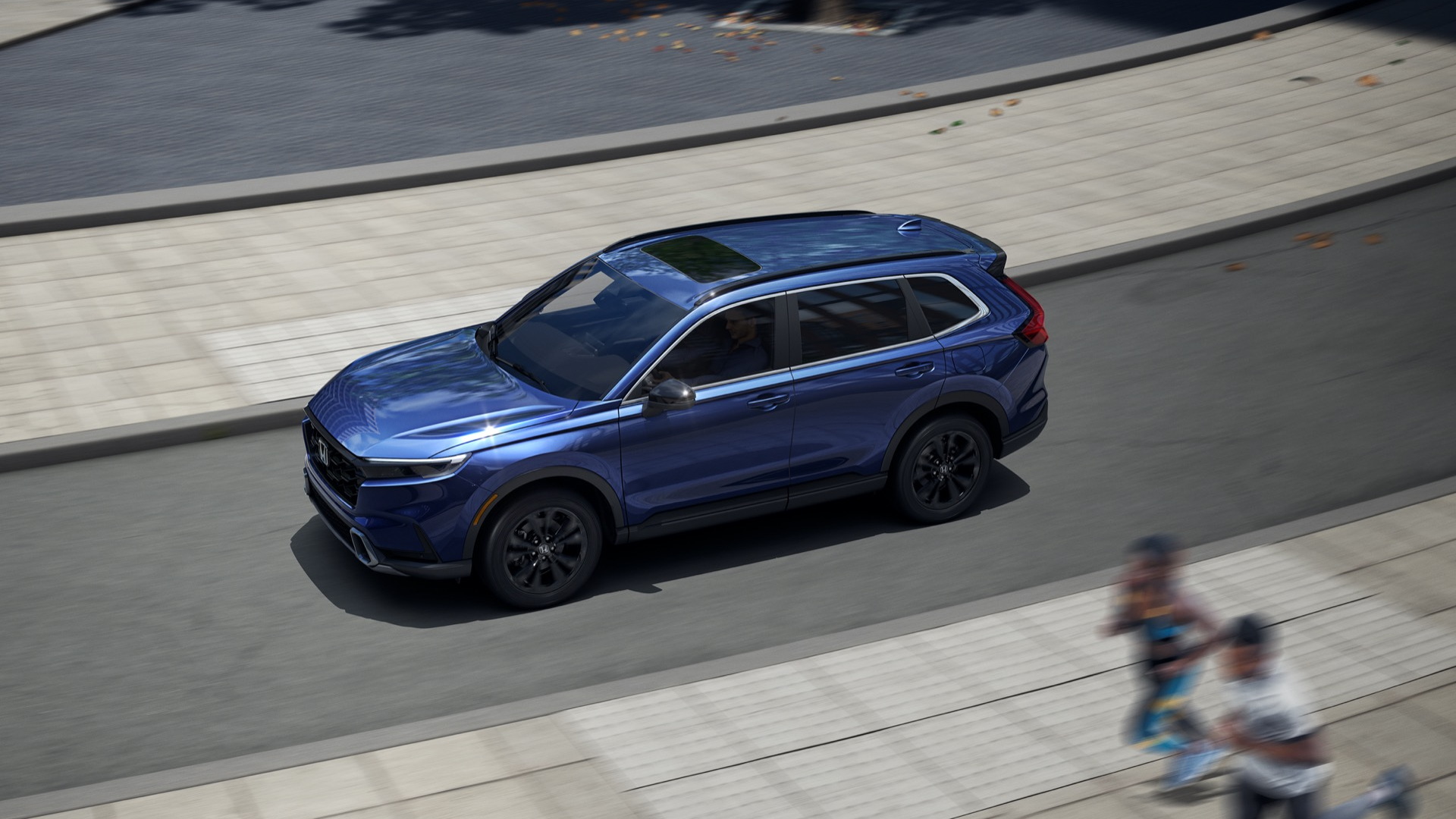 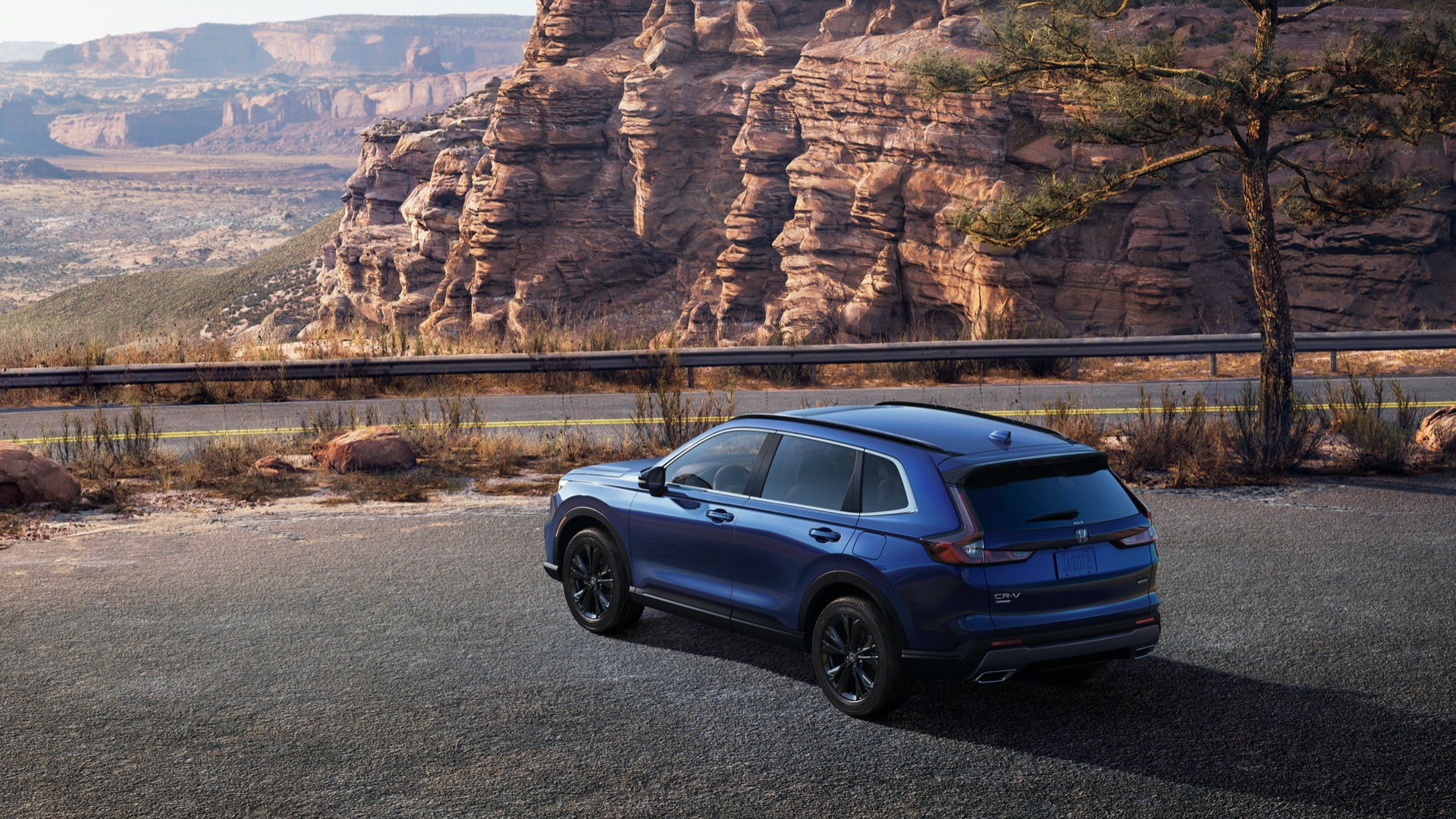 Honda has said that the Honda CR-V Hybrid plays a key role in its electrified-vehicle plans and with a redesigned CR-V lineup revealed Tuesday, we now have a better idea how.

With the aim to make CR-V Hybrid sales about 50% of annual CR-V sales, hybrid versions of the CR-V are now cast as the sporty models in the lineup, with Sport and Sport Touring trims now hybrid-only, while EX and EX-L versions go with the non-hybrid 1.5-liter turbo-4.

Honda has upped the output in hybrid versions to 204 hp and 247 lb-ft of torque—versus 212 hp and 232 lb-ft in the outgoing version—with a new fourth-generation version of its two-mode hybrid system.

Honda first rolled out a CR-V Hybrid for 2020, and the hybrid system, as we've reported, already presented a more electric driving experience versus some hybrid alternatives.

Honda's hybrid system essentially runs the CR-V Hybrid as a series hybrid in most situations, using the motor system to propel the vehicle while using the gasoline engine to generate electricity. Then in some cruising conditions the system can clutch the engine to the drive wheels at a tall ratio. With changes on the 2023 model, the electric motor system can now also operate at up to 115 mph—versus 86 mph before—and throughout the lineup the CR-V gets a retuned version of its all-wheel-drive system that can now send up to 50% of torque to the rear wheels. The CR-V Hybrid requires a propshaft to turn the rear wheels, whereas some other models such as the Toyota RAV4 Hybrid employ a separate motor in back.

The company hasn’t yet revealed fuel economy numbers for the new CR-V hybrid, but don’t dismiss the possibility of improved mpg. Even with the sportier emphasis, a boost in primary motor torque could expand the range of electric-only operation in a way that pays off in more easy going driving styles.

In a new configuration, Honda mounts the hybrid system’s two motors side by side, allowing the use of a larger propulsion motor with increased torque. Detailed specs for the system haven’t yet been released, but direct injection has been added for the Atkinson-cycle 2.0-liter inline-4.

Honda's suspension and steering updates promise a more fun-to-drive CR-V this time around. Variable-ratio steering and the strut front suspension are together mounted to a stiffer front subframe, with a multi-link rear suspension on a subframe in back that’s retuned with a higher spring rate.

Otherwise, the CR-V grows larger once again and this is one of Honda’s more radical redesigns of this compact-crossover mainstay that’s evolved in fits and starts over its 25 years. Here, it grows 2.7 inches in length and 1.6 inches in wheelbase versus the outgoing version—now at 184.8 inches and 106.3 inches, respectively, and has a slightly wider track. Honda says the whole body structure is 15 % stiffer (torsionally).

Thanks to a “radical repositioning” of windshield pillars, the CR-V gains both a sportier look and improved visibility, according to Honda. The front pillars specifically are pulled several inches rearward, outward, and down, which calls for a sportier roofline, and side mirrors go door-mounted.

Looking for a CR-V plug-in hybrid? Unlikely. That’s because the Honda Prologue electric SUV is on the way by early 2024—when, with the ramp-up of hybrids, Honda’s lineup will be looking a lot more electrified.