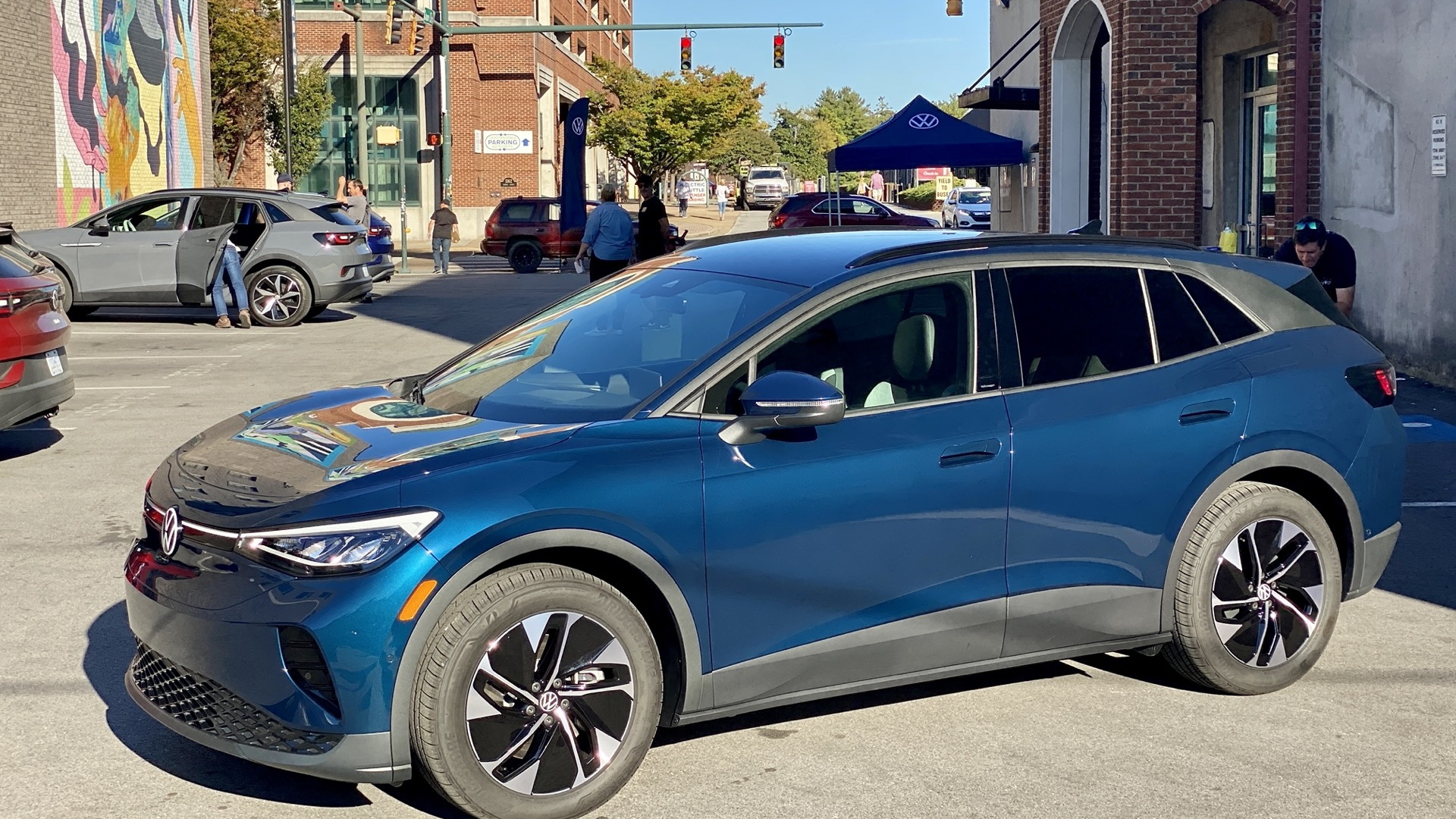 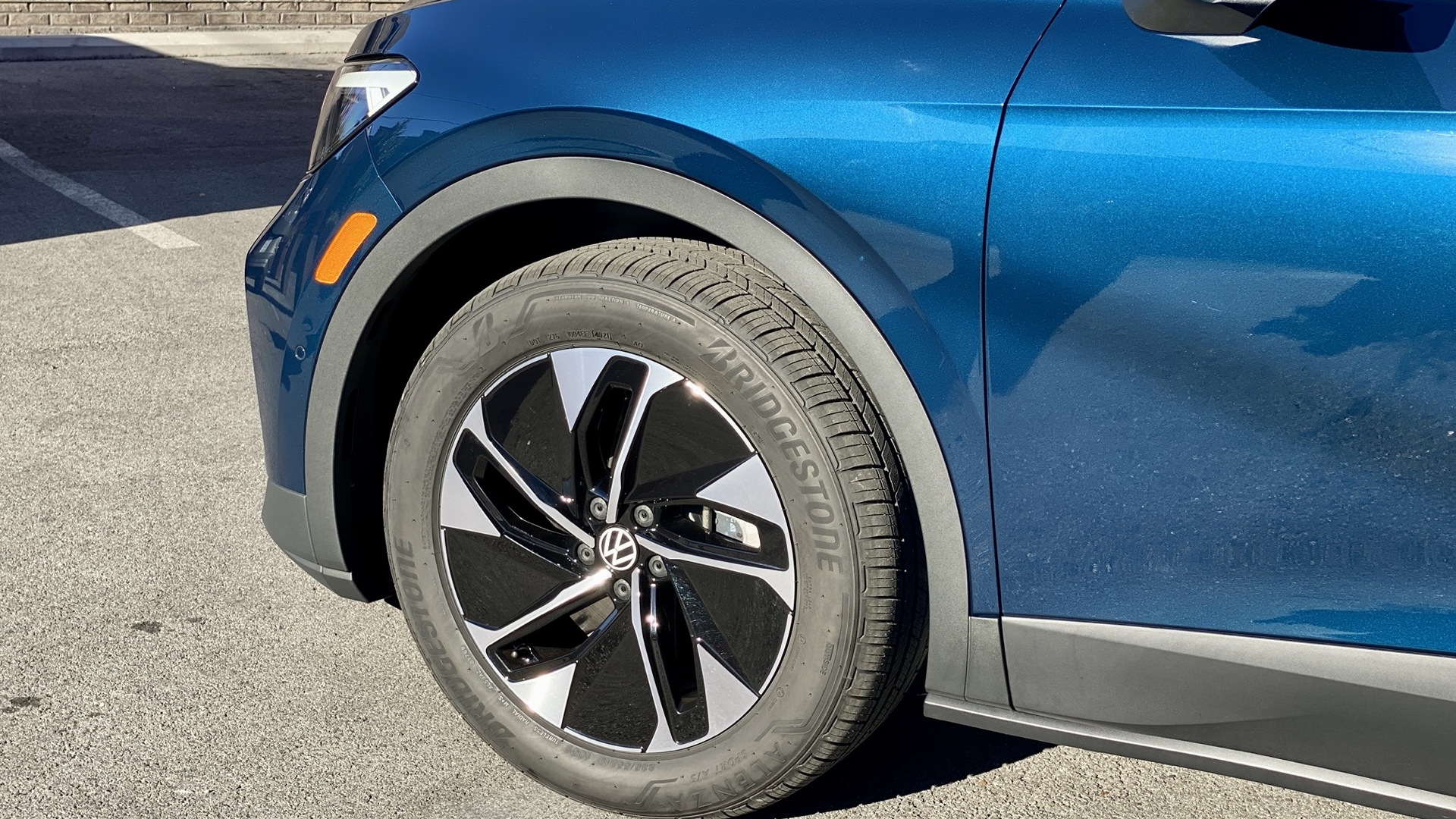 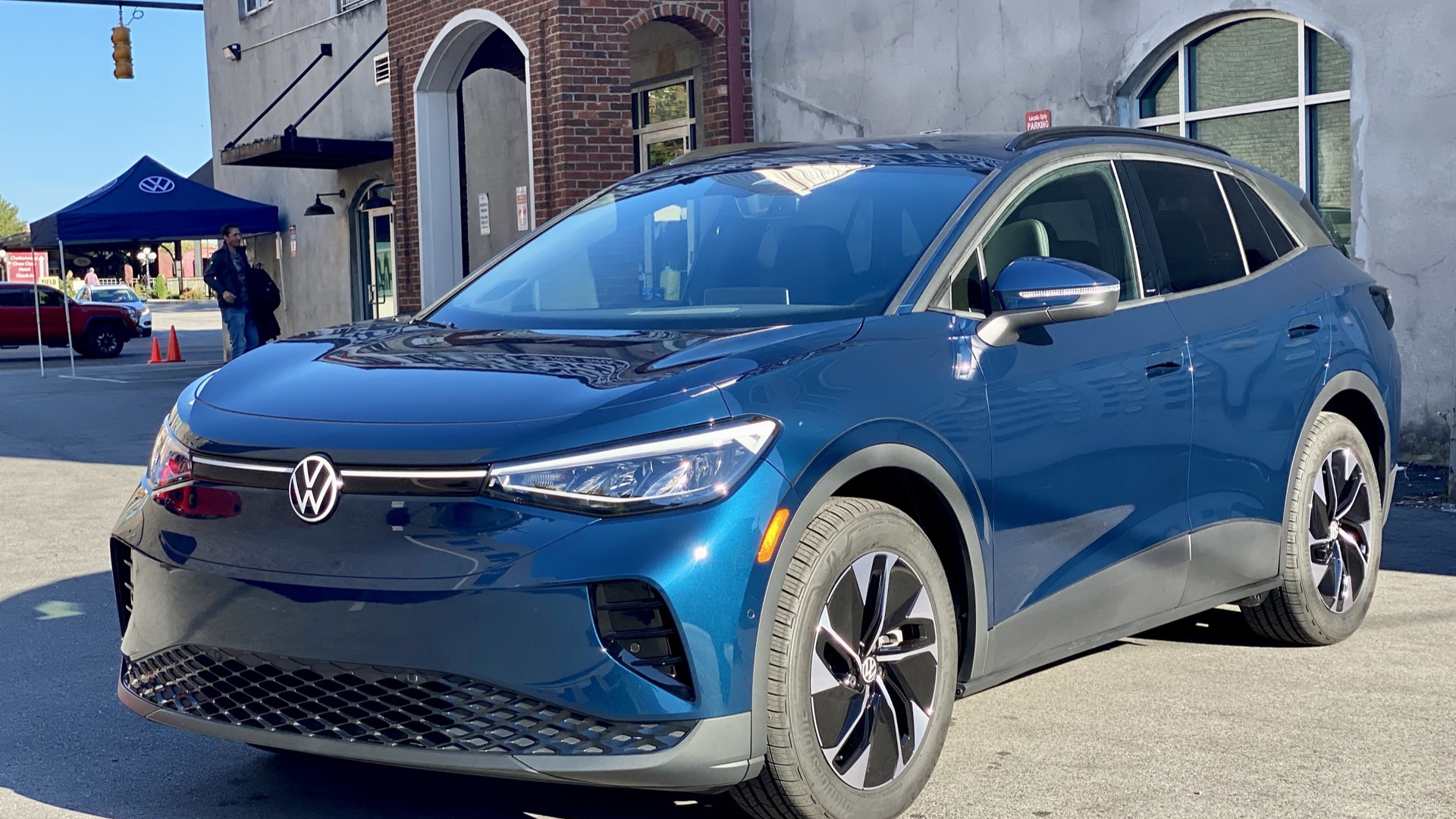 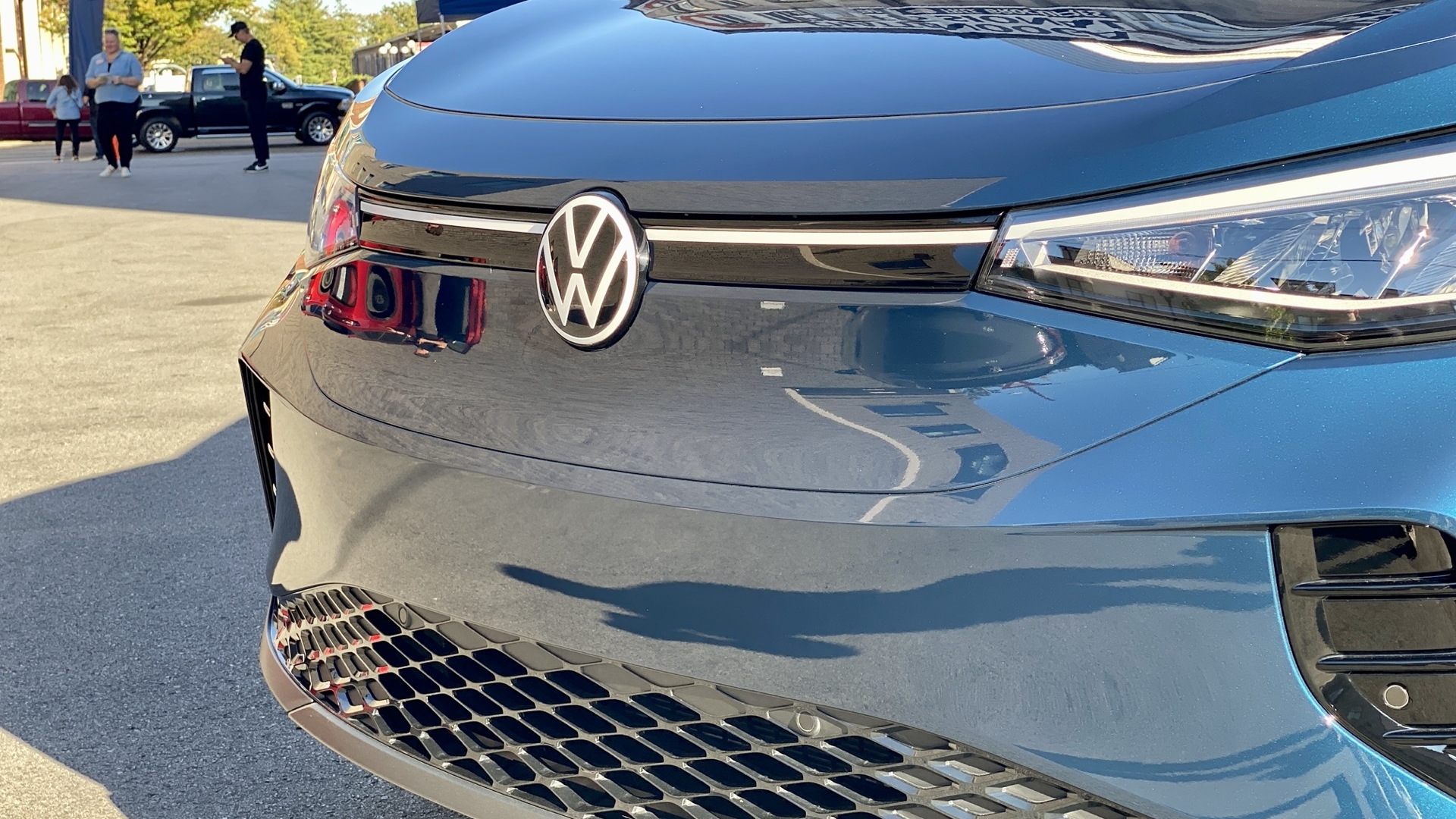 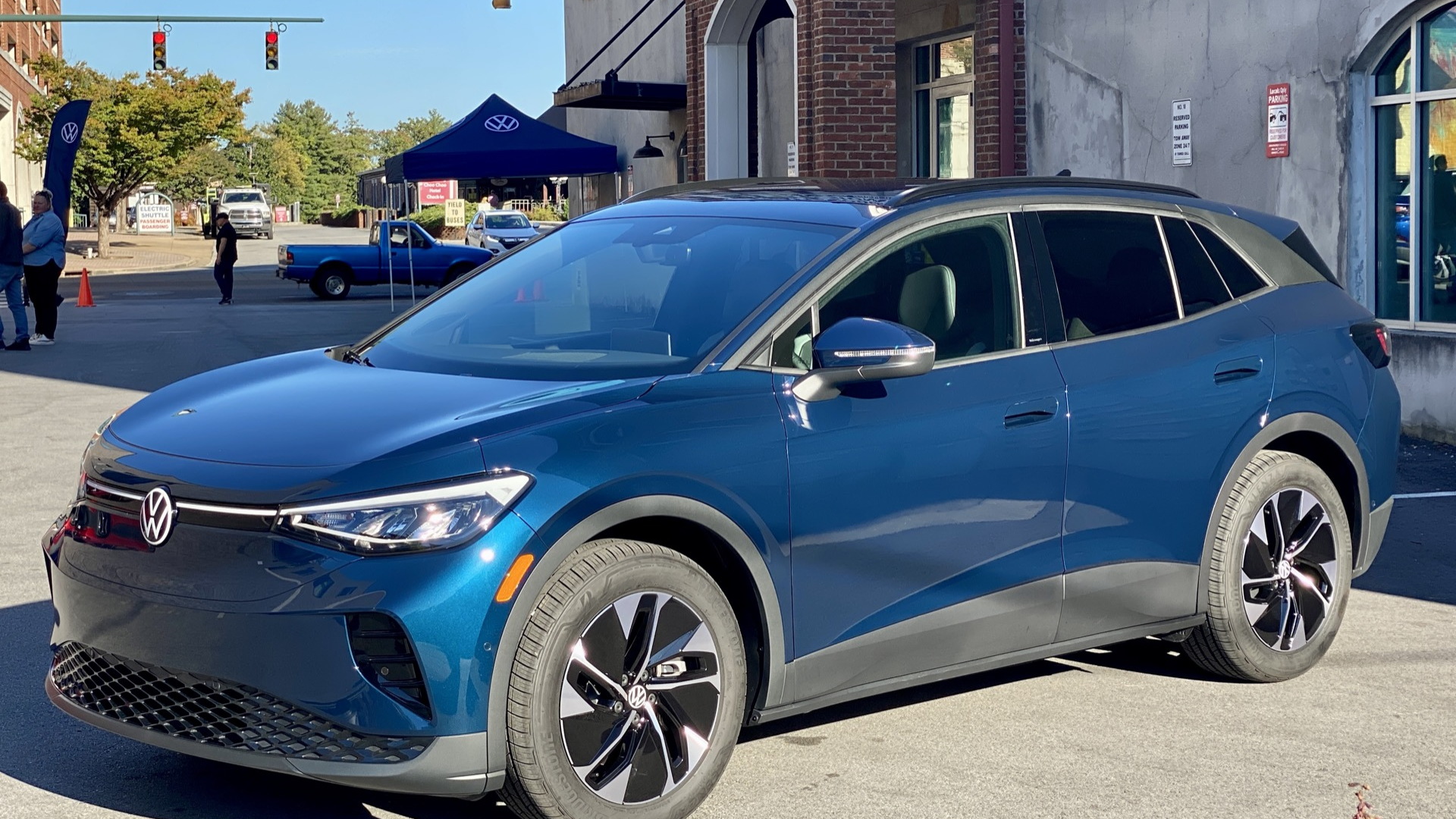 A brief spin in the 2023 Volkswagen ID.4 Standard around its U.S. hometown of Chattanooga proved that an affordable electric crossover doesn’t need to sacrifice convenience. With its newly available, smaller battery pack and single motor, the ID.4 still has more than 200 miles of range and costs less than $40,000. That not only undercuts rival electric crossovers, but pegs it at about $8,000 less than what customers are paying on average for any new car, gas or electric.

The 2023 Volkswagen ID.4 Standard uses a smaller 62-kwh battery pack feeding a single-motor rear-wheel-drive unit, resulting in a range of 209 miles. The usable capacity of the pack is 58 kwh. At a starting price of $38,790, including a $1,295 destination fee, the new model marries what was so good about the VW ID.4 electric crossover SUV that launched in 2021, while making the bad more palatable. 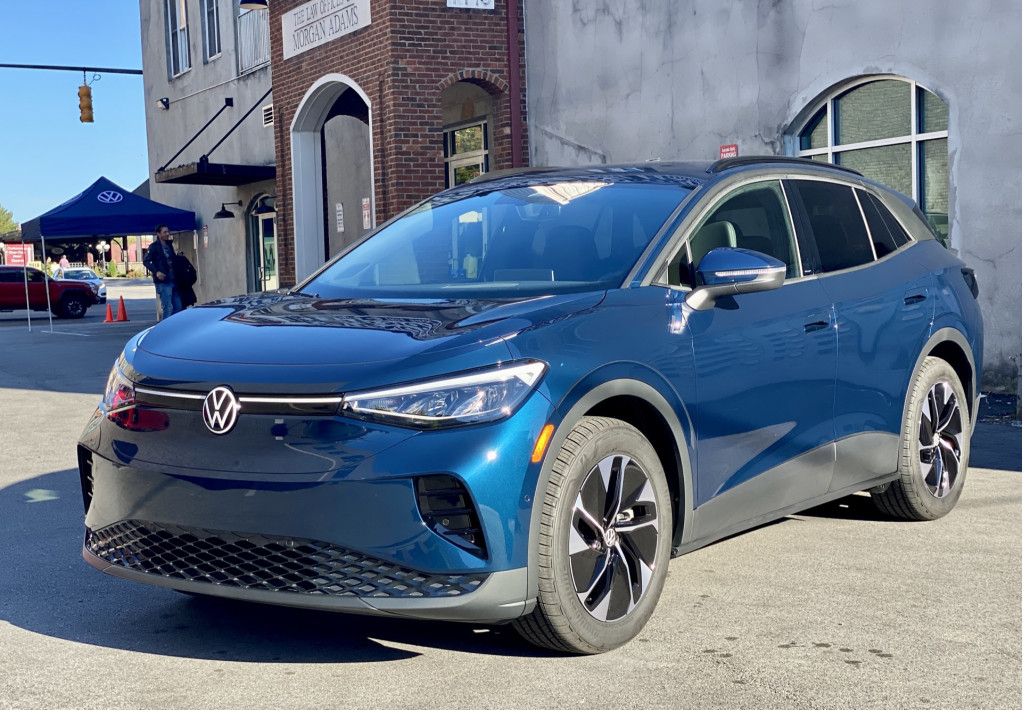 The 62-kwh pack with RWD can be had in ID.4 Standard and ID.4 S trims, and the differences between the base Standard and the updated Pro models are minimal. The ID.4 Standard lacks the LED projector headlights of the ID.4 S and above grades, and instead of the available light bar and illuminated VW logo up front, the ID.4 Standard has a white luminescent band between its LED reflector headlights. There’s no side nameplate on the driver’s front fender, and it has a traditional roof instead of the fixed glass roof on every other ID.4. It rides on 19-inch alloy wheels instead of 20s, and the cloth interior with synthetic leather bolsters doesn’t feel or look like a big budget cut from the synthetic leather on other models.

Otherwise it matches up pretty well with the previous base model, the ID.4 Pro with the 82-kwh battery pack that now costs $5,000 more at $43,790. Standard features include heated front seats, heated side mirrors, ambient lighting, keyless start, a smartphone wireless charger with a clip to keep the phone in place, and a suite of driver-assist features.

Volkswagen uses a small digital instrument cluster mounted to the steering column that only shows three tiles of info: the active driver-assist features, the speedometer and range meter, and the trip computer. It’s fine, and somewhat of a relief to not be poked in the eye by pixels and info at every spot. Yet it’s also wasted real estate. 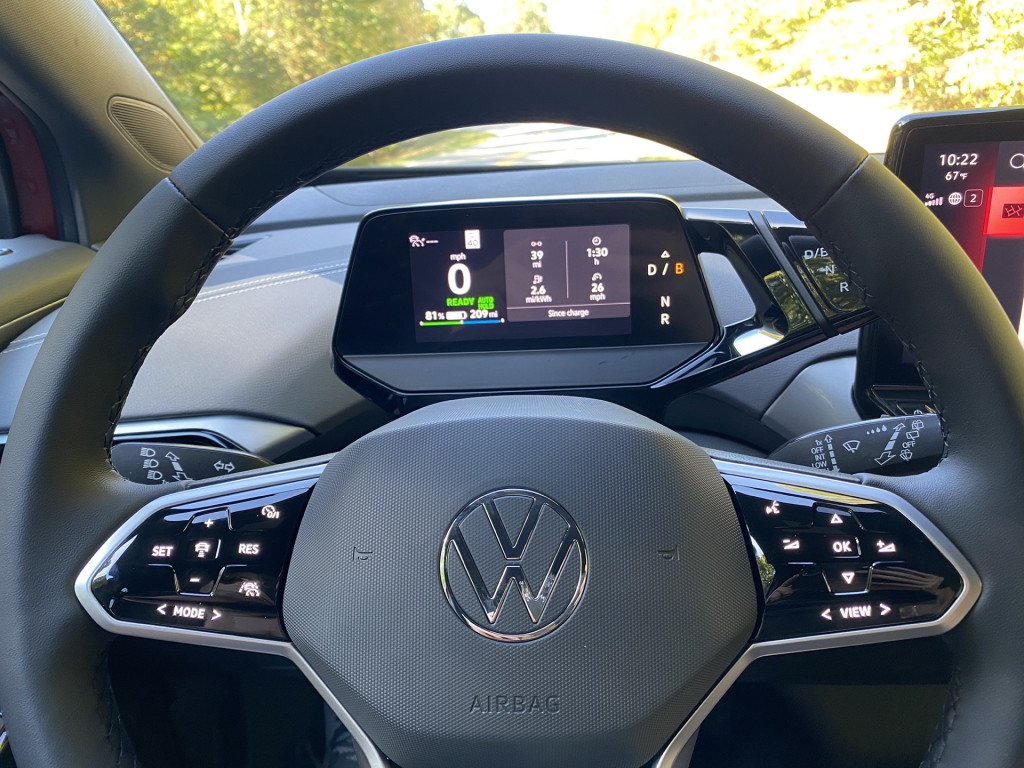 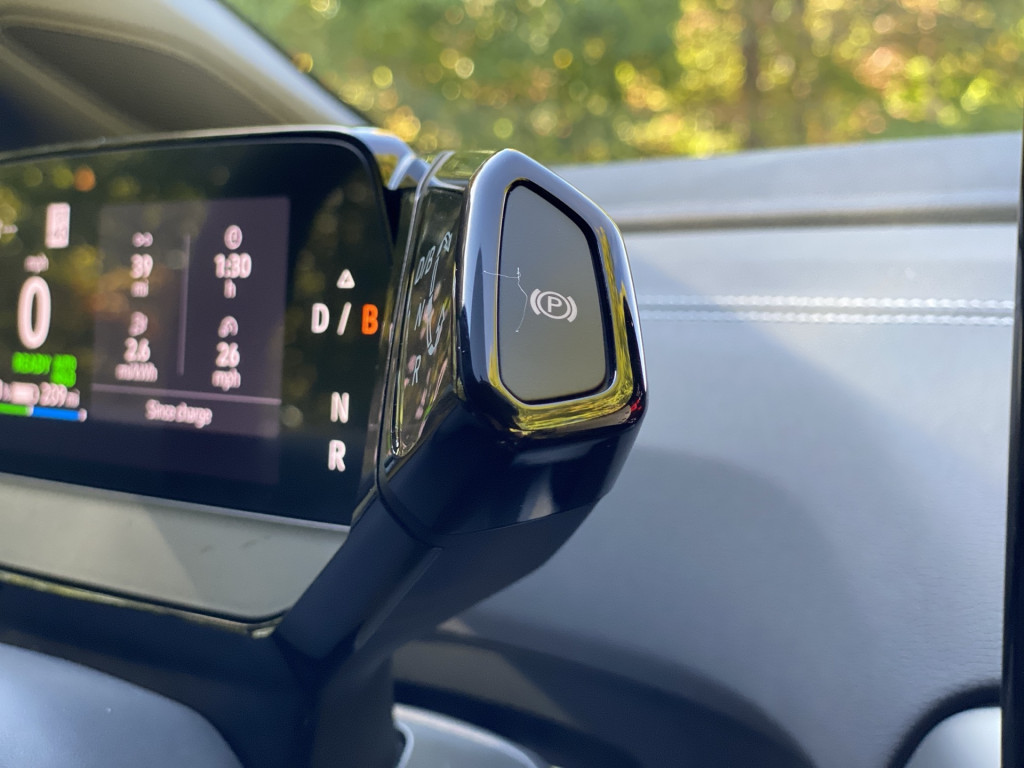 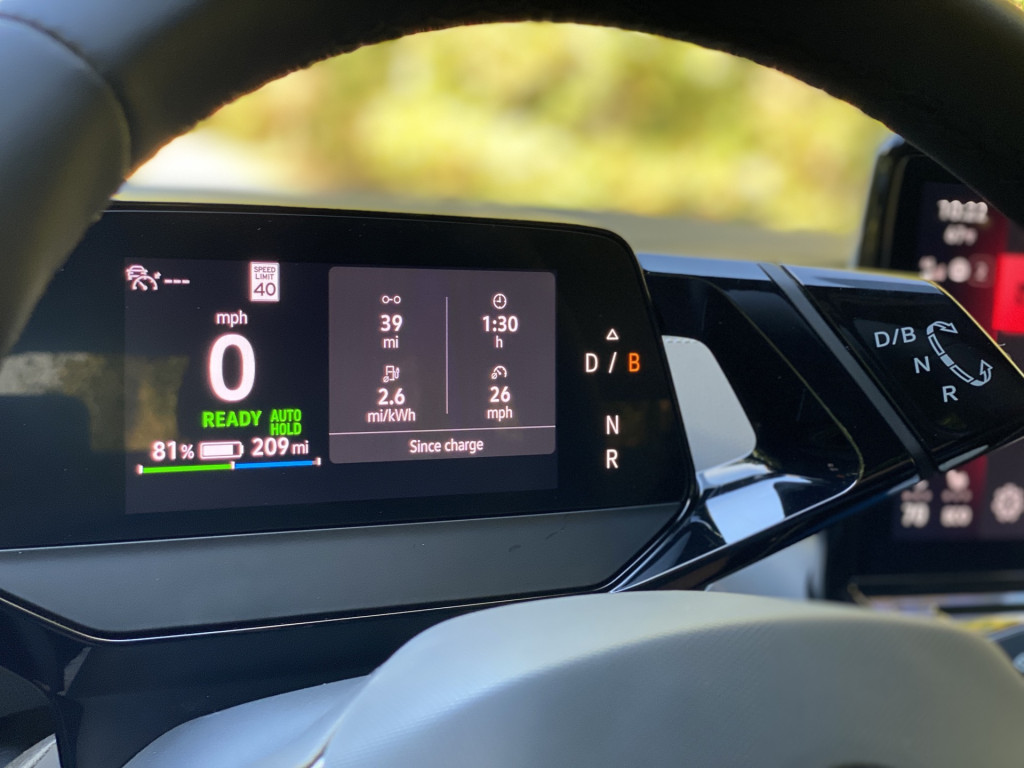 The main disappointment still lurks in the layout and interface of the infotainment system. A 12.0-inch touchscreen comes standard across the ID.4 family this year, and it’s been updated to show charging stations (and gas stations) on navigation and map views. But it still takes at least five clicks to change the XM radio station without using presets. Voice commands can complete the action with less pressing but in the same amount of time.

VW seems to want owners to use the presets, or playlists on their phone, but is that really how most people listen? It’s one example that illustrates how the system as a whole has too many layers.

Other salient info is buried deep within the home screen that could be relieved by a sidebar menu. There are four haptic menu buttons below the screen for drive modes, driver-assist tech, climate control, and parking help, but the window defrost buttons are still offset on the other side of the steering column. Climate control shortcuts sit below the touchscreen, which is nice to not have to reply on the touchscreen for basic functions. But the haptic temperature sliders are more sensitive than an emo high schooler. Overall, the interface feels like another generation away from making sense, though I expect owners either eventually get used to it or ignore most of it.

VW heeded American audiences when it comes to comfort, though. It swapped out the slim armrests for a proper cushioned center console cover that doubles as an armrest with a wider surface area. The cabin seats five in comfort, and the ID.4 Standard affirms the model’s driving character. 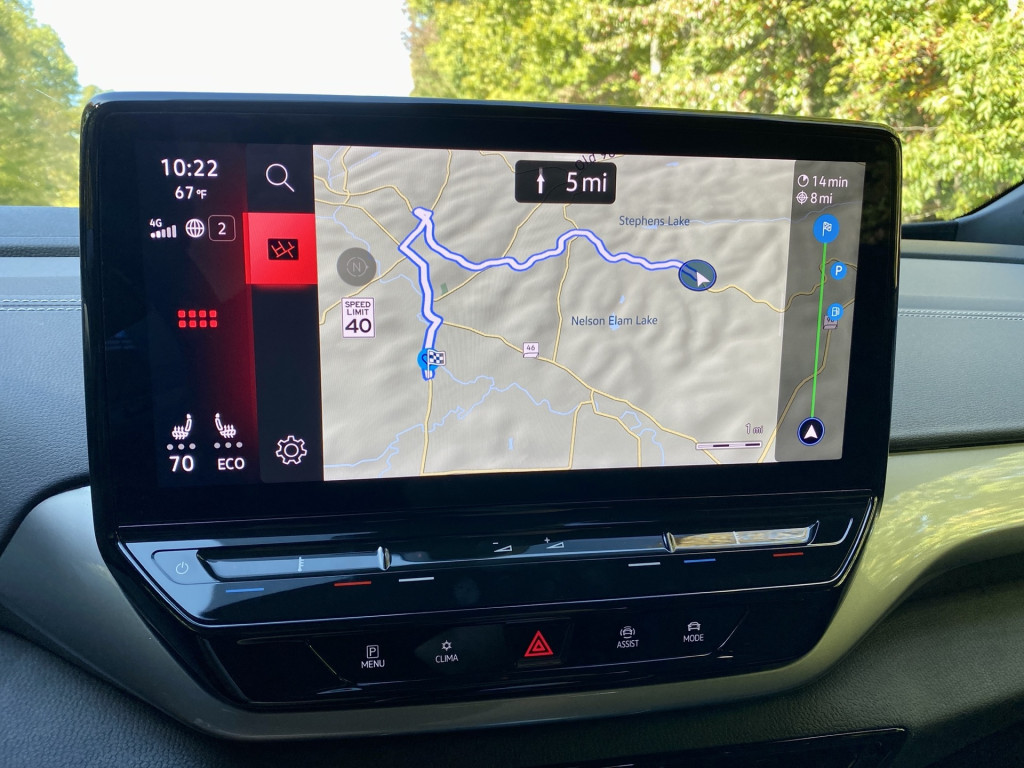 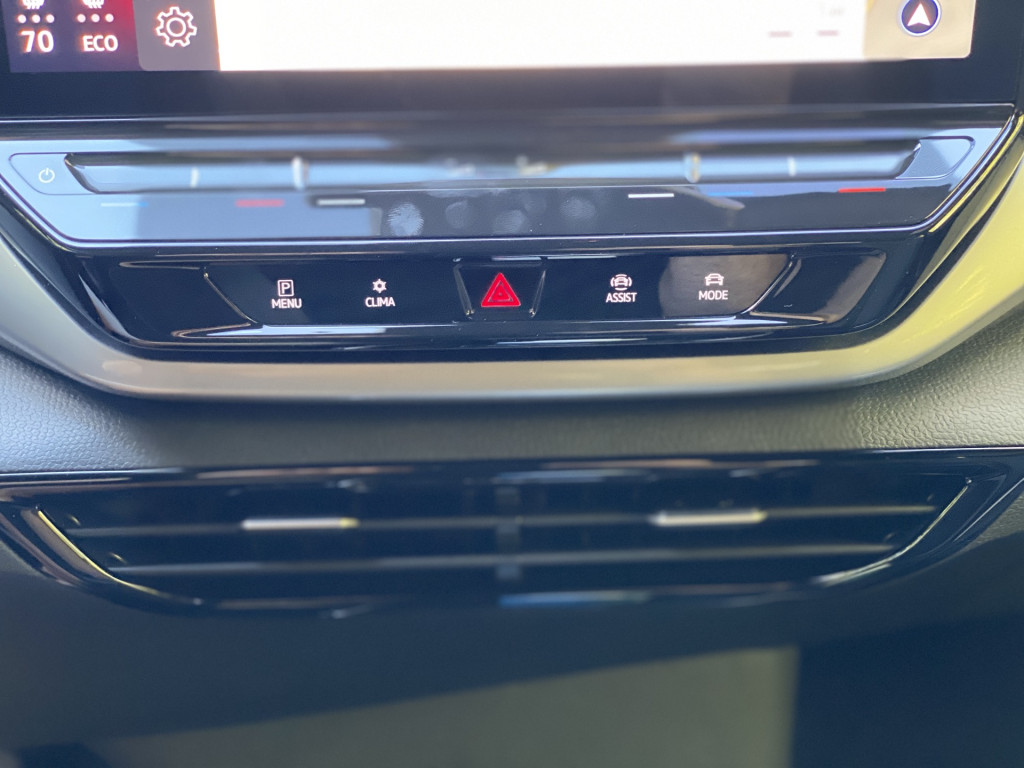 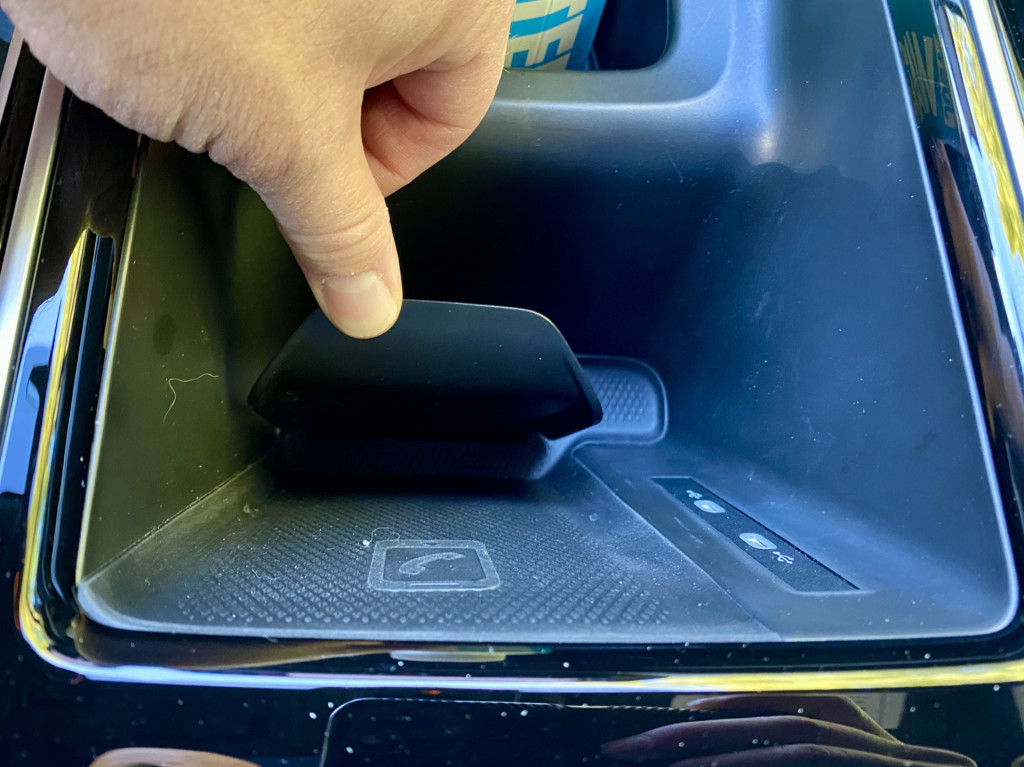 The permanent-magnet rear motor makes 201 hp and 229 lb-ft of torque. It doesn’t leap off the line like higher-powered electrics, but a surge comes on not long thereafter to give it a jolt. At cruising speeds, there’s plenty of torque to push past traffic and beat the semi on the on ramp. The brief prototype loop spanned the Tennessee River that winds through Chattanooga, but I wasn’t able to push it as I did during hours of Appalachian driving from Nashville in the all-wheel-drive model with the 82-kwh pack. The ID.4 with the bigger pack weighs about 250 lb more, and the front struts and multilink rear suspension feel tuned for that additional weight. The ID.4 Standard felt a bit springier, lighter, but still had a closer relationship with the ground than the Nissan Ariya and the Hyundai Ioniq 5. The precise steering showcased its German DNA, even though it’s built in Tennessee.

The larger pack now can charge at up to 170 kw (from 135 kw) due to improved cell chemistry from battery supplier SKI; DC fast-charge times to 80% capacity drop from 36 minutes to 30 minutes. Expect the smaller pack to DC fast-charge at a rate of up to 140 kw, to 80% in about 40 minutes. VW includes 30-minute fast-charge sessions on the Electrify America network for the first three years of ownership. It says the 11-kw onboard charger enables 240-volt charging at home in about 6.5 hours.

All ID.4 models have Plug and Charge functionality that lets chargers and networks communicate to recognize the vehicle and share billing info without having to go through additional cards, fobs, or app approvals.

The Chevy Bolt EV still beats the 2023 Volkswagen ID.4 Standard on price and range, but the small hatchback lacks the roominess and equipment, as well as the style and edge, of Volkswagen’s new base model. And, depending on how the IRS finalizes the complex proposals of the Inflation Reduction Act, the 2023 ID.4 Standard could qualify for the $7,500 tax break when it goes on sale late this year.