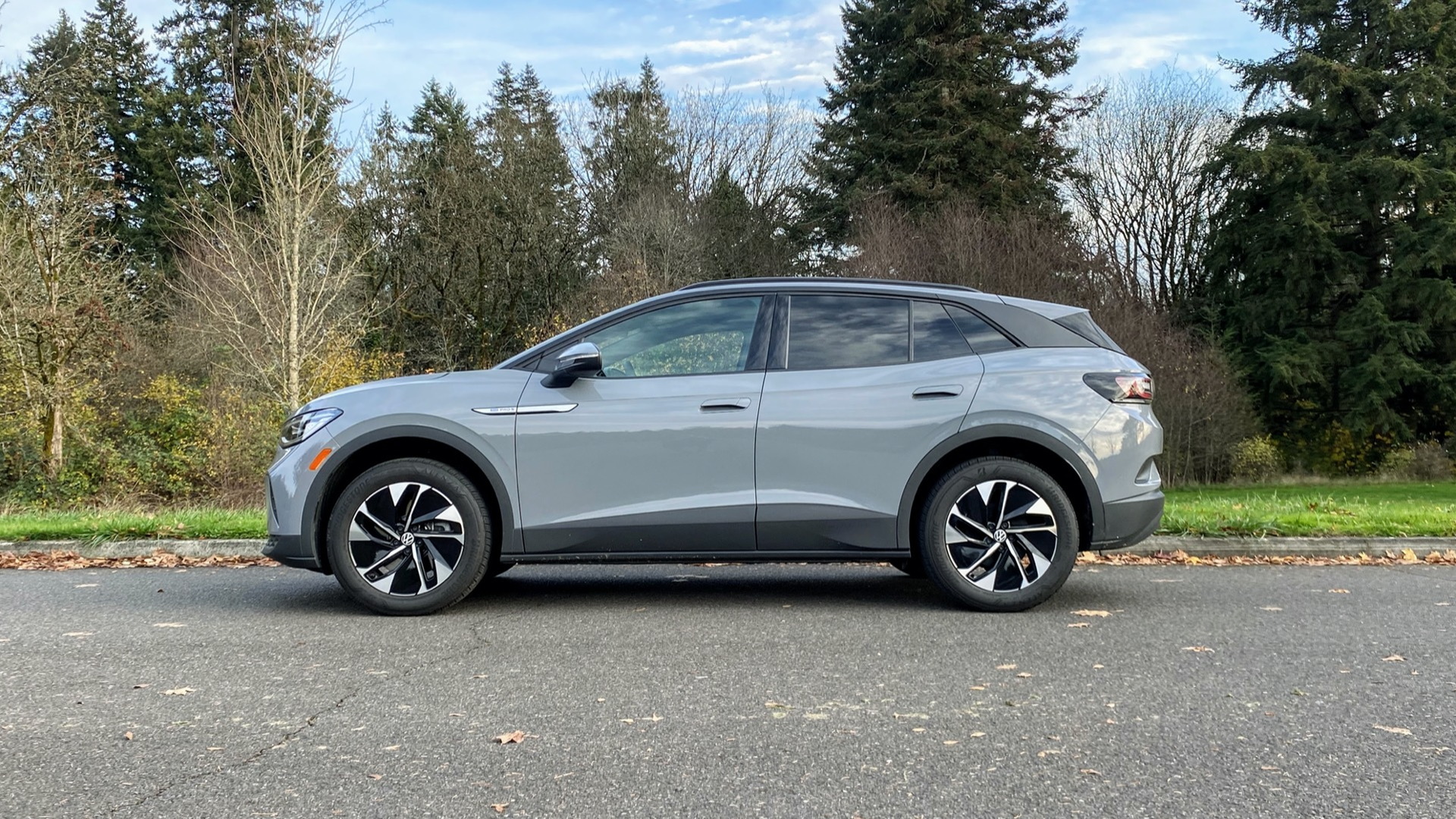 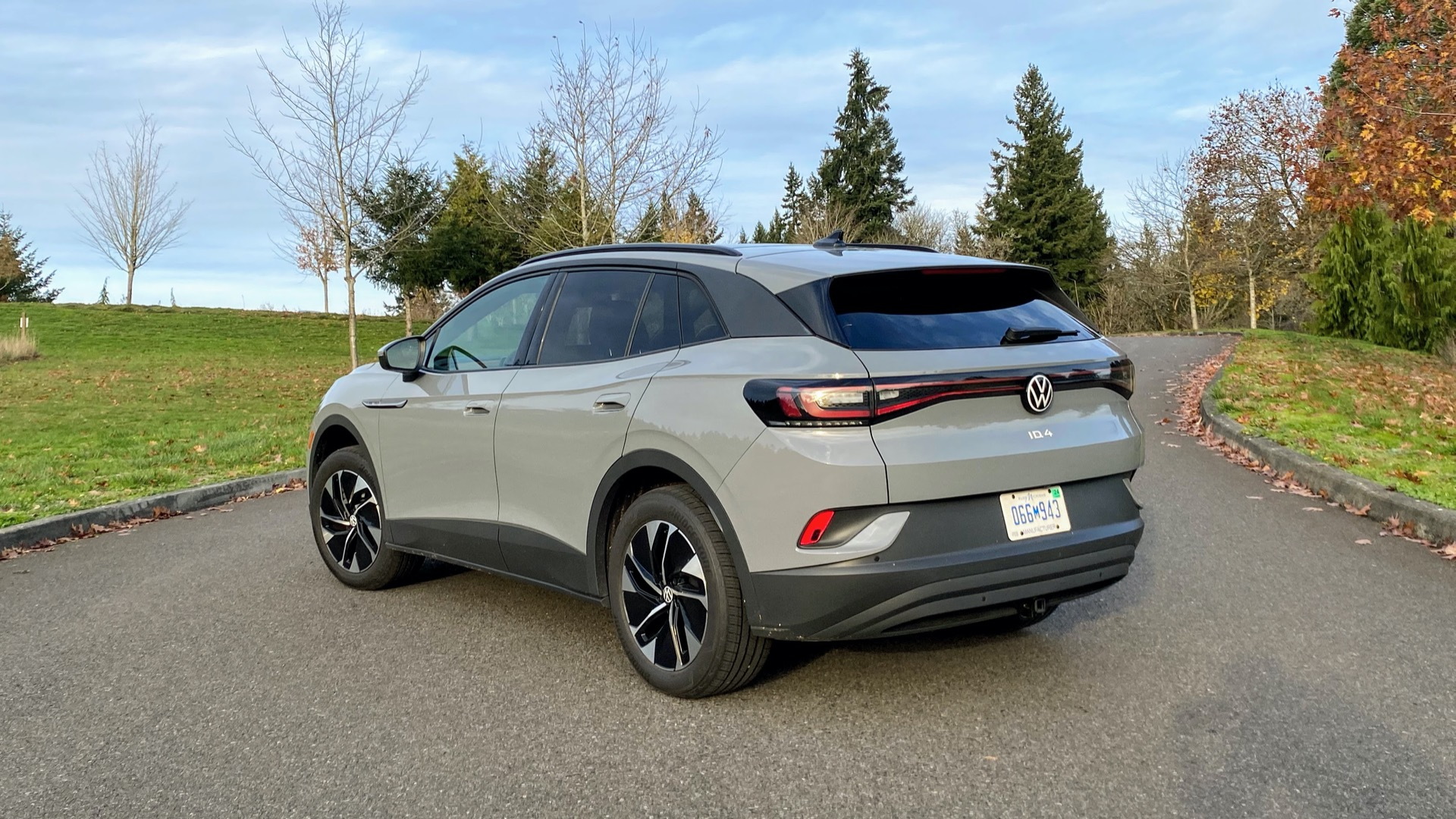 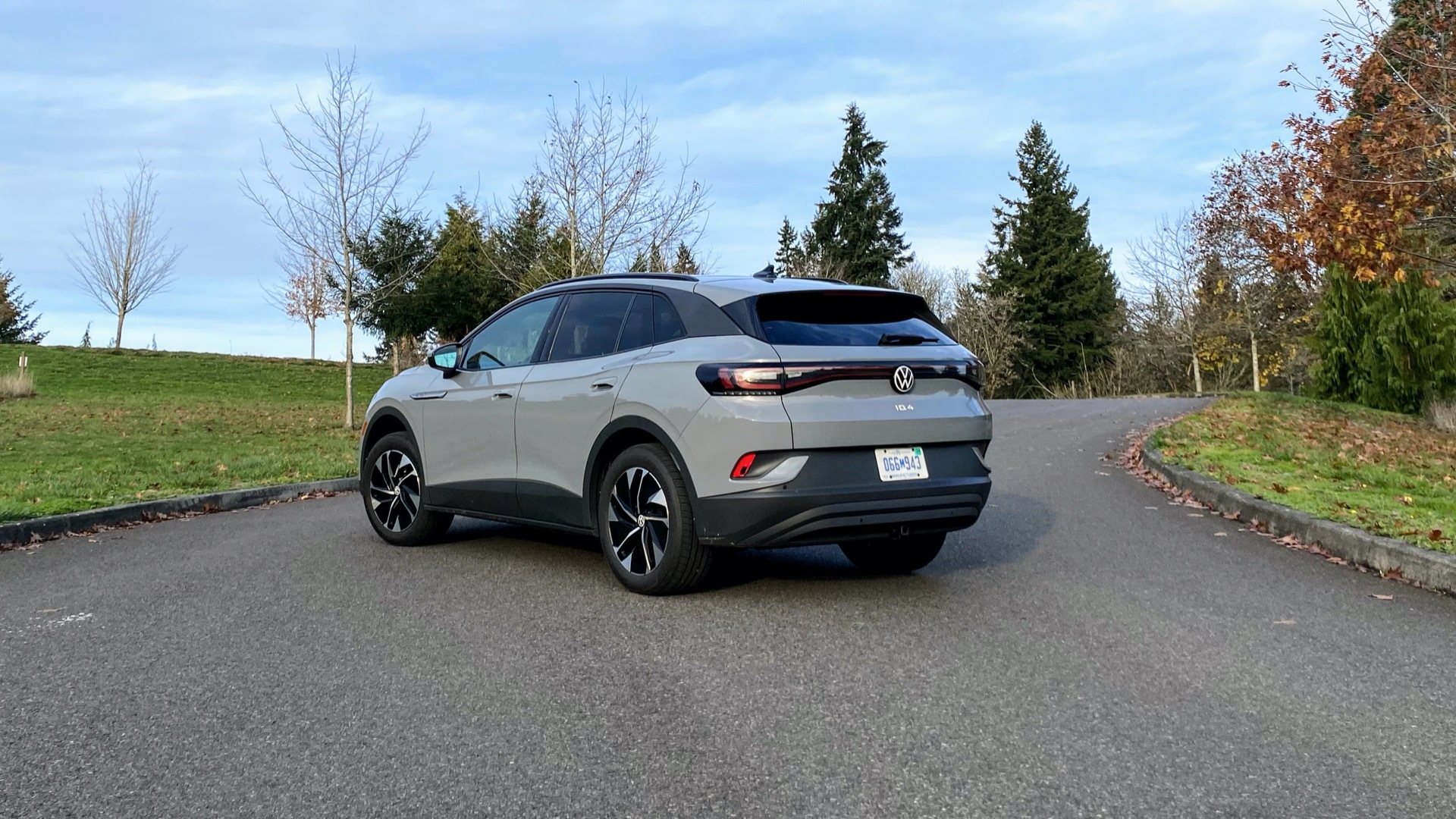 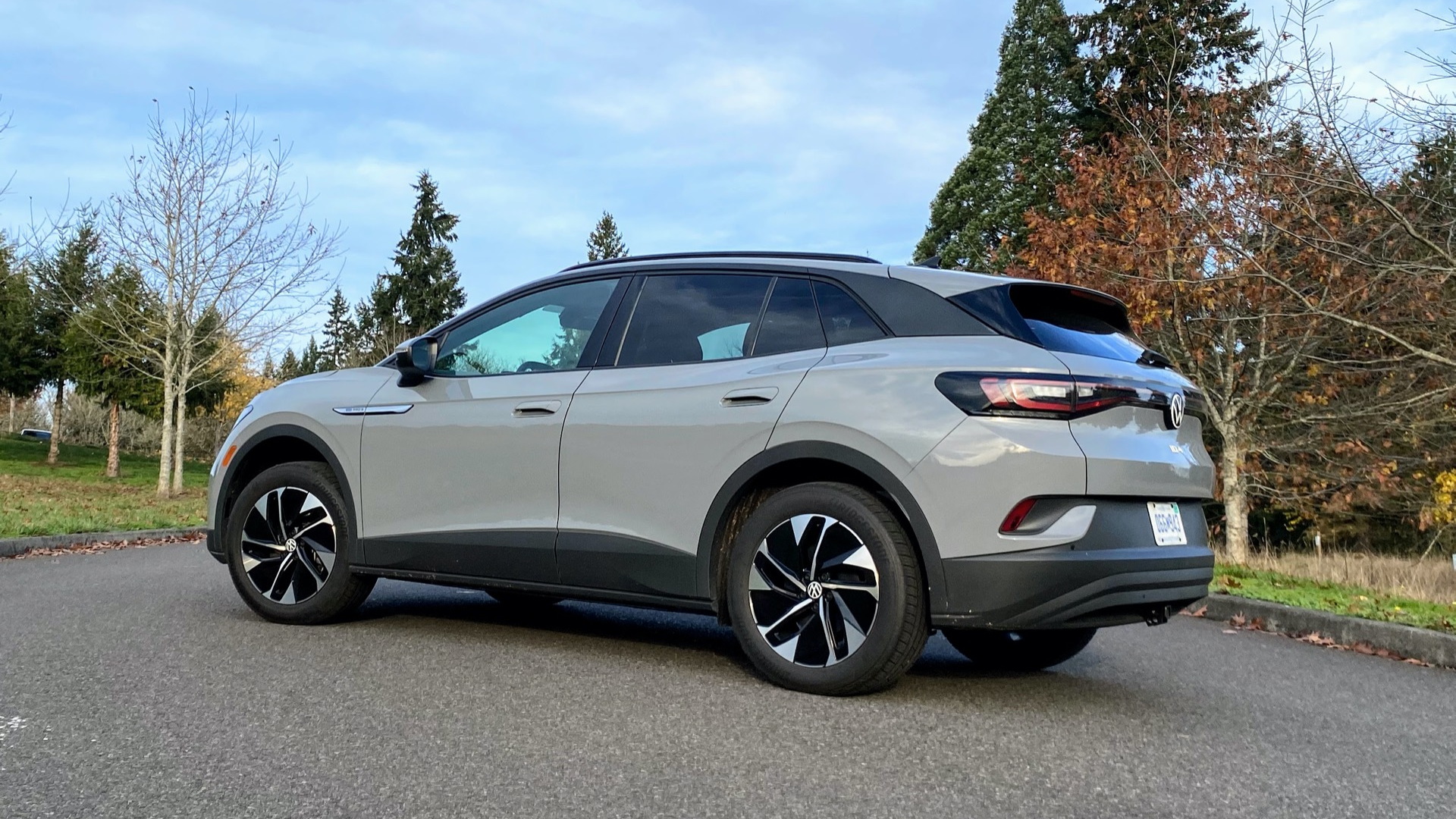 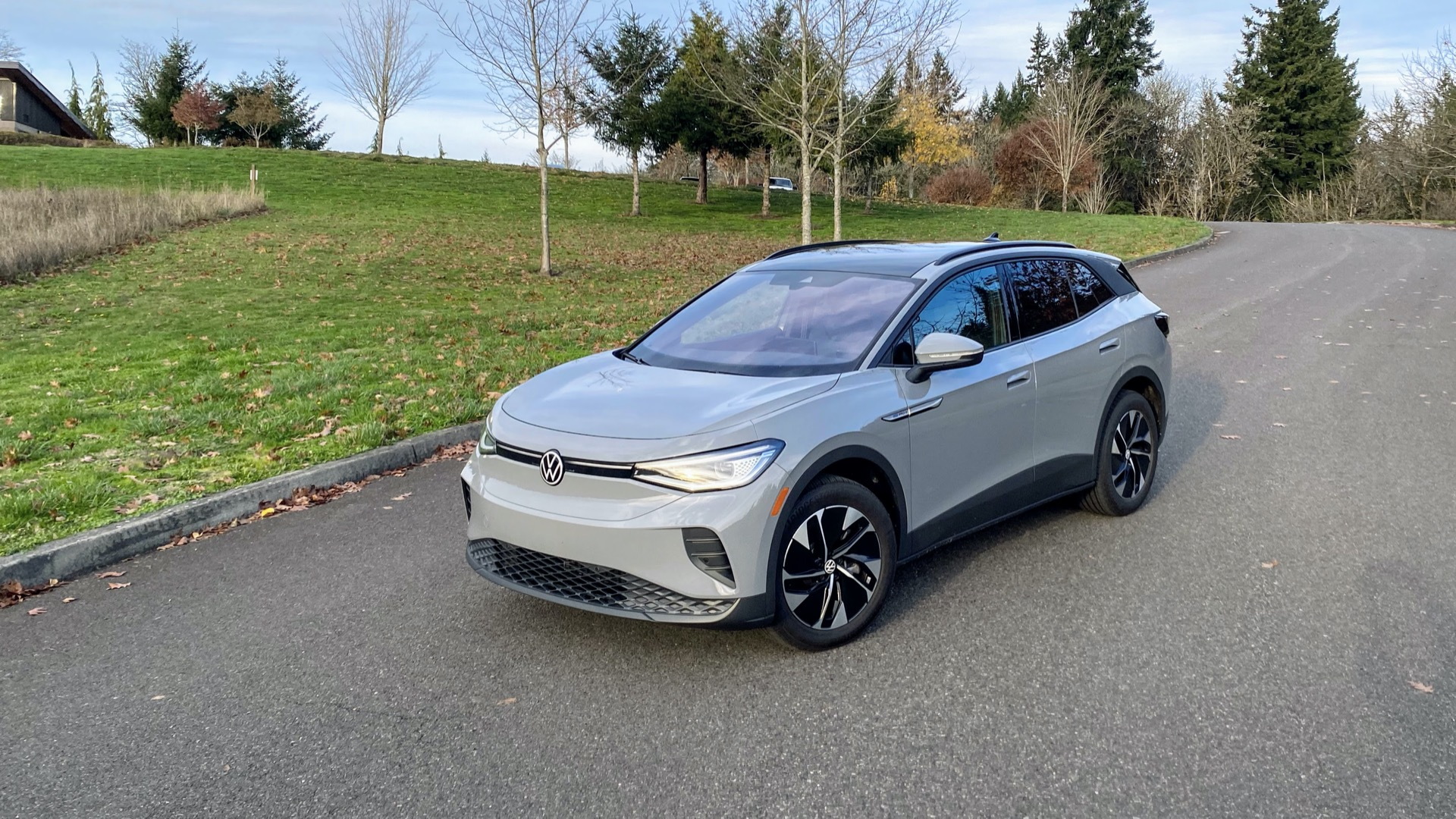 Modularity has been a mantra for Volkswagen as it ramps up toward its stated goal of “electric vehicles for millions, not millionaires.” Its MEB platform is a flexible foundation for the ID.4 electric crossover you can get now, for the eagerly anticipated electric Microbus reboot, and for many more EVs yet to arrive.

The approach helps keep costs down, but one of the potential downsides is that products start to feel the same. In a recent first drive of the ID.4 in all-wheel-drive guise, I was impressed to see that VW can bring a different driving character to the ID.4 just by adding one of those building blocks: a motor module in front.

The ID.4 AWD holds its cards close at first. Drive rather gently and the ID.4 has the same nice, linear tip-in from stoplights as the single-motor rear-wheel-drive versions of this EV. With a combined 295 hp and 339 pound-feet of torque from both motors—a big boost over the RWD models’ 201 hp and 229 lb-ft—the AWD versions can dash to 60 mph in 5.4 seconds, versus 7.5 seconds in single-motor RWD versions. But the ID.4 doesn’t leap off the line like other EVs; it’s more of a groundswell that builds once the car’s rolling.

Coaxing out the sportier side

The front motor delivers to the “instant torque” moniker so often applied to EVs, as long as that’s any time you’re underway, giving the ID.4 a notably perkier feel from city speeds up to highway-passing situations.

The ID.4 defaults to Comfort mode, which like Eco mode seems to downplay any role of the front motor. On the other hand, Sport mode brings it all to life dynamically, completely changing the character of the car and allowing a clever, nuanced handshake of torque delivery to maintain poise in tight backroad hairpin corners.

The difference in personality likely has to do with the motor layout. Instead of adding another permanent-magnet motor like what’s in back to the front wheels, VW adds a current-excited asynchronous unit in front. The different motor format in front has advantages, in that it doesn’t use any rare-earth elements and can “coast” with no drag when it’s best for efficiency, eliminating the need for special clutches in front such as that used in the Hyundai Ioniq 5 and Kia EV6.

At an earlier backgrounder on the platform, VW engineers told us that part of the reason for choosing the motor layout in front was that it also allowed a high rate of brake regen as needed. So far it doesn’t seem like VW has tapped into that potential, however, as regen in the shifter’s ‘B’ mode—what you select for more, versus the more relaxed ‘D’—didn’t seem much more heightened versus the single-motor model. Brake-pedal feel was good, so we can probably call the grabby traits we noticed in an earlier pre-production car as a fluke.

My test 2021 ID.4 Pro S AWD has an EPA-rated 250-mile range. It arrived with a long-term trip-computer average that hadn’t been reset in 2,885 miles, showing 2.9 mi/kwh over that distance, representing an average 33 mph. That works out to a 223-mile range, considering its 77-kwh usable battery capacity—with no testament to how it was driven or used over that period, of course.

Based on what I saw over about 150 miles and three days, that’s likely a good estimate for what many drivers will see in the real world, if you include a wide mix of styles.

Over about 52 miles of mostly highway driving on a chilly 46-degree evening, I averaged just 2.5 miles per kwh, according to the trip computer. Then over a vigorous 47-mile loop at less judicious speeds on the highway, and a quick blast on a backroad, with the outside temp at 49 degrees, I saw 2.7 mi/kwh. And finally, over a 57-mile stint including more city driving and daytime errands (with temps reaching about 55 degrees), I averaged 3.3 mi/kwh.

At the end of my three days with the ID.4, the trip computer believed a 100% charge to be 238 miles of range. From what I’ve seen so far, rear-wheel-drive models might be able to do even better than the current models’ EPA ratings of up to 260 miles, while all-wheel-drive models do come with a range penalty that more closely aligns with the ratings.

Over 220 mostly highway miles in a rear-wheel-drive ID.4 earlier last fall (temperature about 55 degrees), I averaged an excellent 3.3 mi/kwh—suggesting a range of more than 250 miles—so it would seem from this first time with the AWD that it can’t deliver close to that. We’ll follow up with a longer-term or longer-distance test when we can.

Carrying over all the roominess and comfort

In a couple of earlier drives of the rear-wheel-drive ID.4 1st Edition, I found it to have fantastic ride quality, precise steering, and a verve that exceeds its rather leisurely (for an EV) acceleration. The ID.4’s backseat space has great head room and leg room, and cargo space is excellent (30.3 cubic feet with the seatbacks up, 64.2 cubic feet with them flipped forward).

In all, it’s good to see that the AWD models carry over nearly all of this potential—with a few minor exceptions. The almost plush ride quality of the single-motor version translates to something a little busier in the dual-motor model—especially on rougher backroads or freeway expansion joints, where the front end feels firmer. Compared to the single-motor ID.4, the all-wheel-drive model rides 0.6 inches higher, so that likely factors in.

Propulsion aside, this drive of the ID.4 was right in sync with our first impressions from earlier last year. The ID.4’s doors shut solidly; window and door trim seem super-tight; and road noise is sealed out of the cabin to a luxury-brand standard—perhaps due in part to the 19-inch Bridgestone Atenza Sport A/S tires. Wind noise, another challenge in EVs because they’re so quiet, is near-absent up to nearly 75 mph, when it strikes up a tune around the side mirrors.

With the ID.4 AWD feeling sharper to drive, I pondered over one carryover I’d like to see less of: the laggy infotainment and virtual-button behavior we saw on earlier ID.4 models. Several versions of hardware firmware later—but still on the same software version—it was better than before, although the screen often “hangs” in the middle of a left/right swipe.

For 2022, in Pro or Pro S forms, the dual-motor AWD layout costs $3,680 more than rear-wheel drive. VW has already said that 2022 models will add a somewhat higher DC fast-charge peak rate (135 kw, versus 125 kw), Plug and Charge compatibility, and a hold feature for the parking brake—some of which might be delivered in an over-the-air update. They also might get an EPA range boost.

Over the more affordable Pro models, top Pro S models gain a larger 12.0-inch infotainment screen, a panoramic glass roof, adaptive headlights, and 30-color ambient lighting. But the Pro models include a great feature set, with heated mirrors, a heated steering wheel, dual-zone climate control, wireless smartphone charging, and adaptive cruise control—and the AWD version of the Pro gets a heated windshield. There’s no AM radio anywhere, and the only piece of cold-weather gear the ID.4 doesn’t include in the U.S. is a heat pump—something Kia, Hyundai, and others decided to wrap in with AWD.

VW set out to make sure that the ID.4 measures up in value versus mass-market gasoline models like the Toyota RAV4 and Honda CR-V. With the addition of AWD models, the ID.4 lineup is closer to complete in that mission. And I think in Pro AWD, the ID.4 is a great deal for those who need all-wheel drive in an EV. For those who want to maximize value and affordability, hold on for the next modular iteration—a lower-priced rear-wheel-drive version with a smaller battery pack is due to arrive later this year.