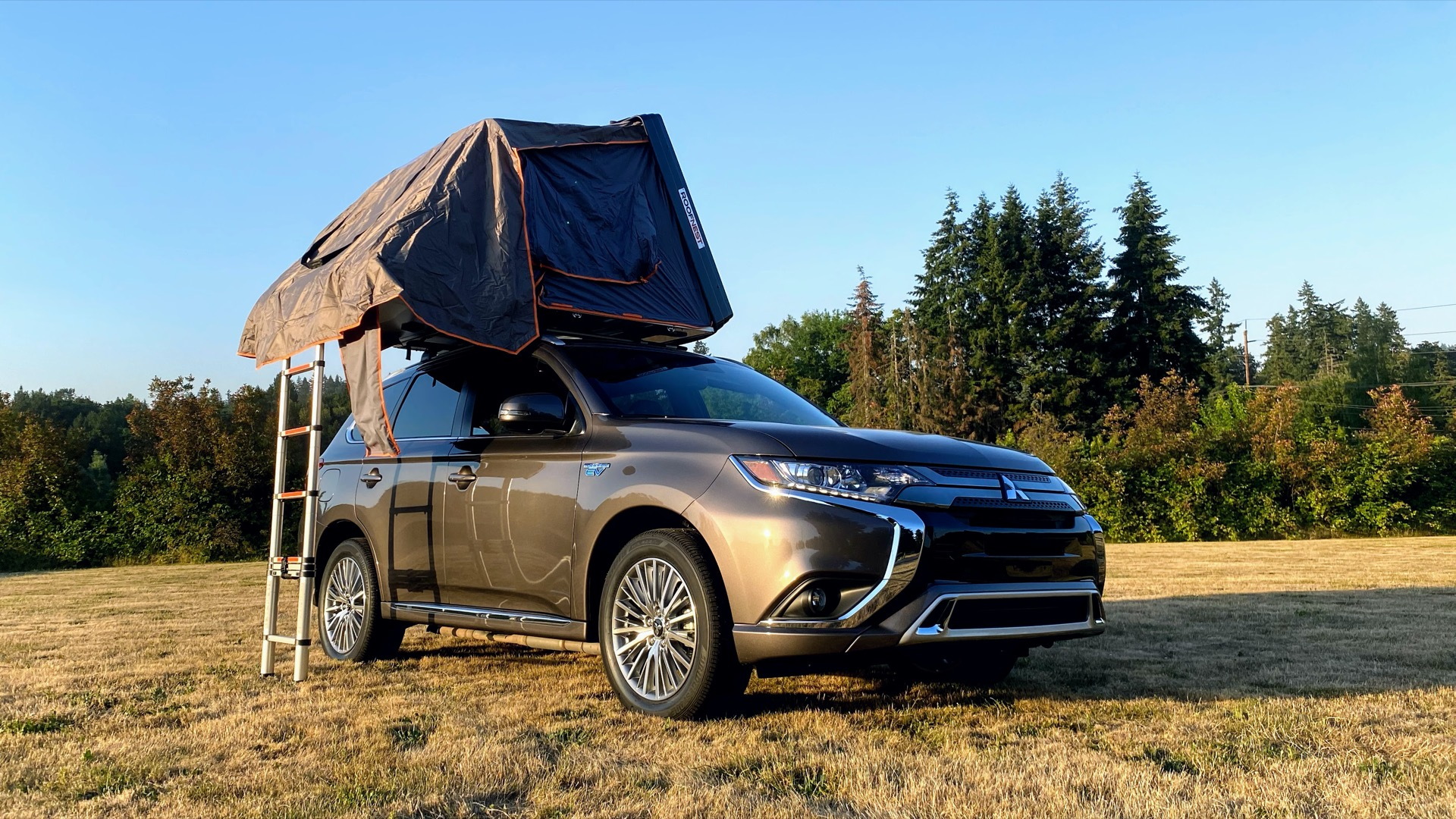 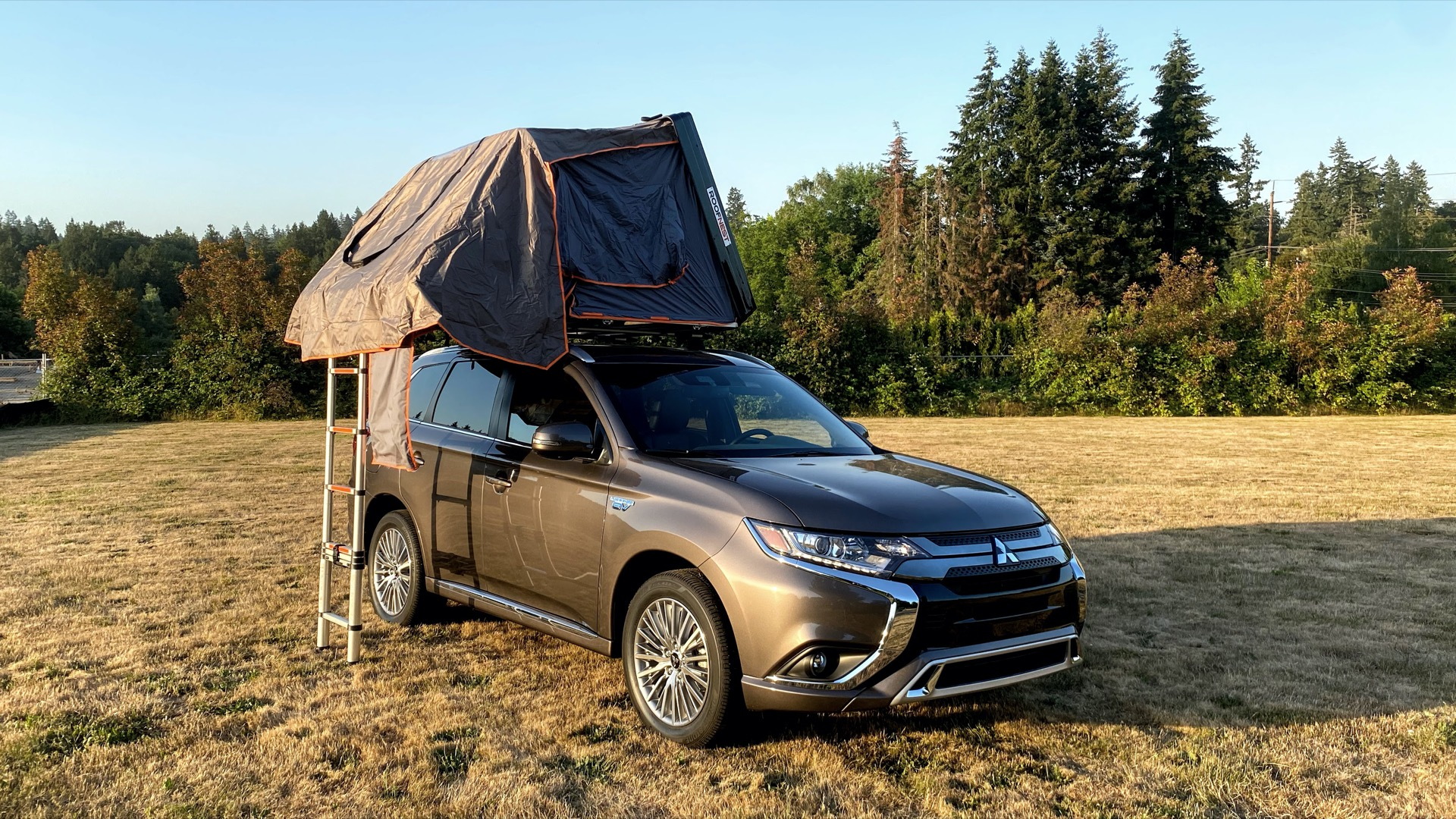 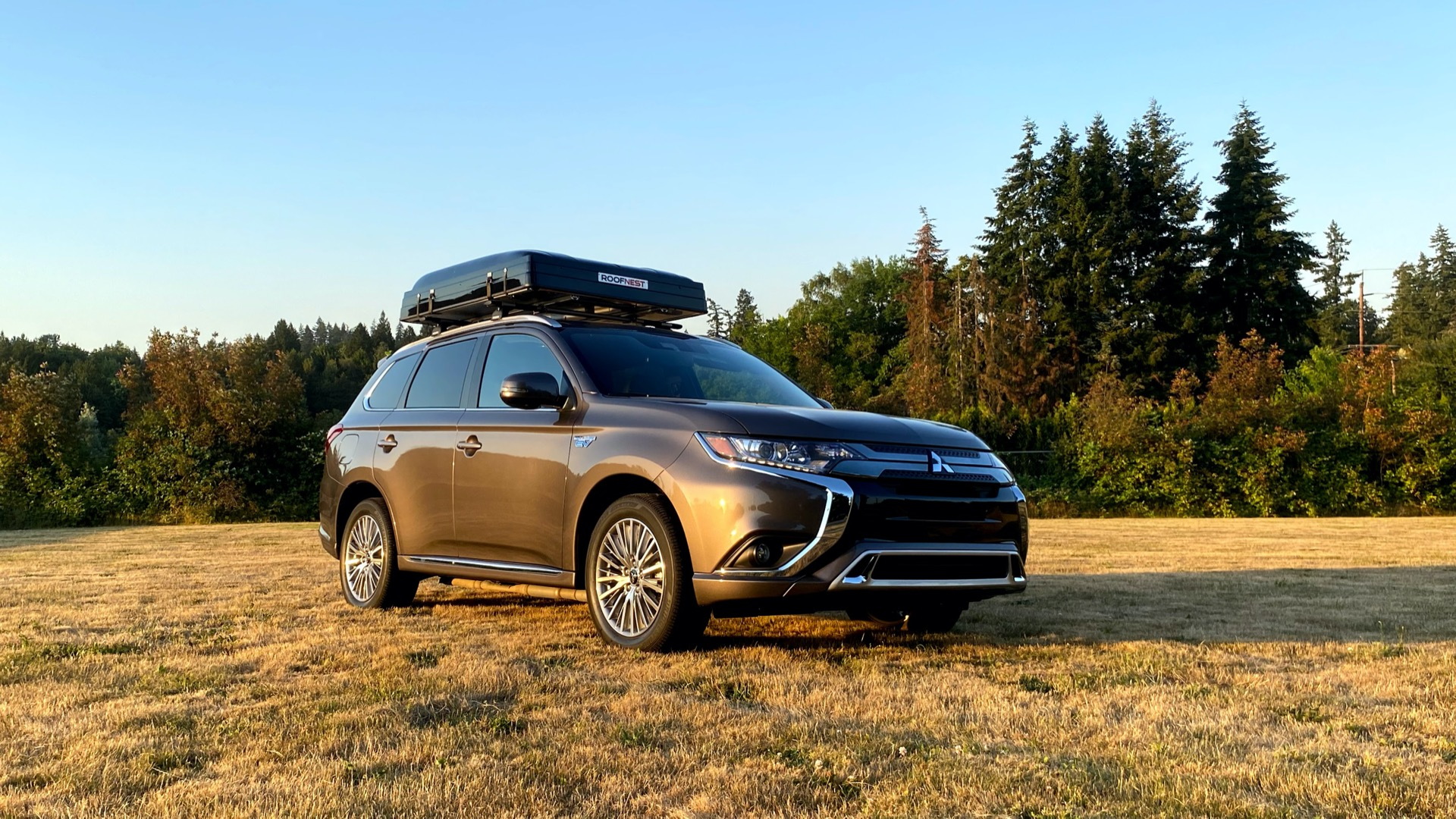 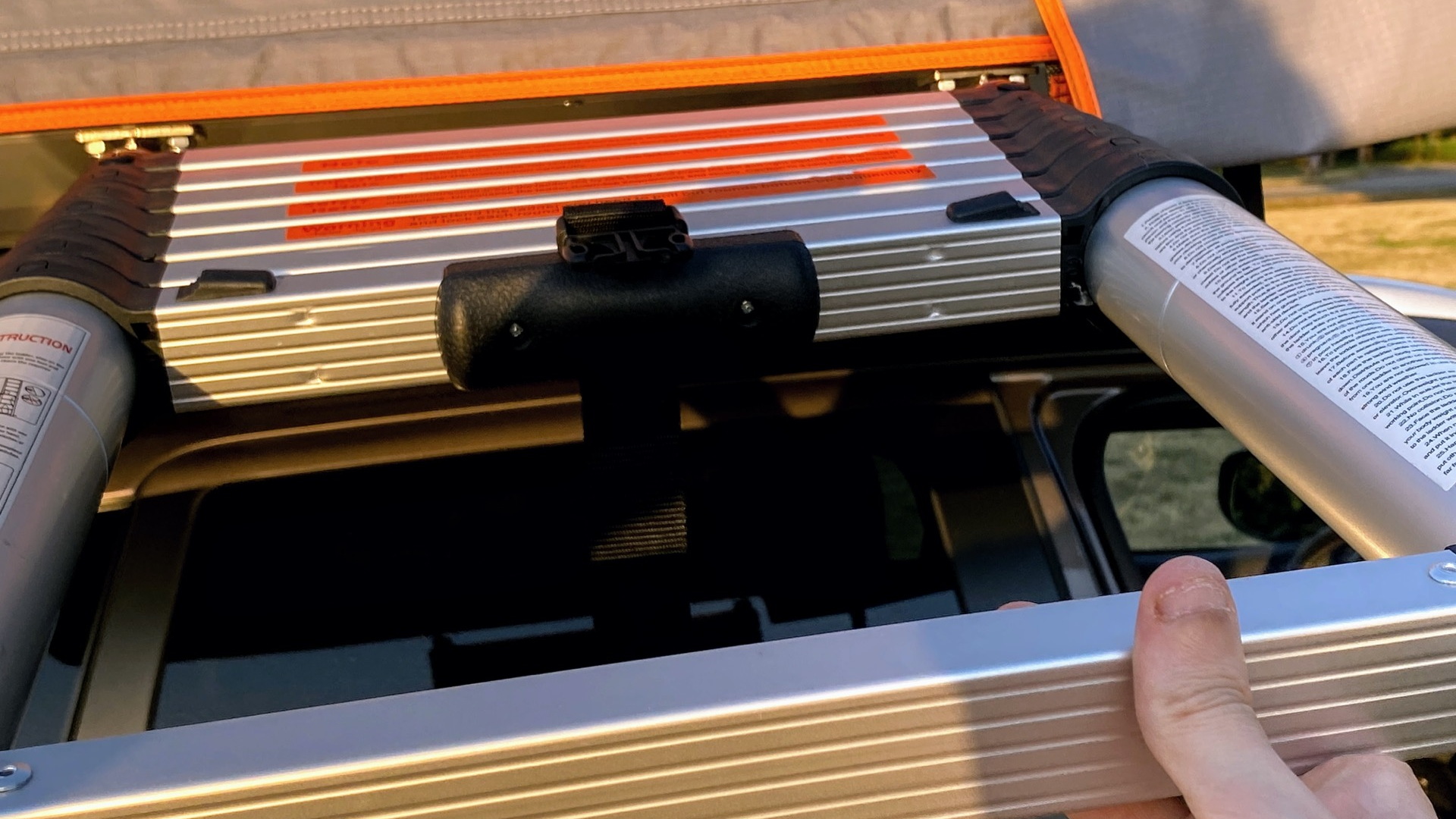 Enjoying the great outdoors means being smart about the gear—keeping it efficient and minimalist yet comfortable and dry.

At face value, the Outlander PHEV delivers an all-electric range of 24 miles—enough to cover most of the commute without starting the engine, especially when considering it’s the only mass-market plug-in hybrid on the market with DC fast-charging (CHAdeMO, like the Nissan Leaf). Keep driving past the charge, and it’s EPA-rated at 26 mpg combined.

In past drives, we’ve easily exceeded the Outlander PHEV rated electric range and hybrid mileage. Adding a big 60-inch wide, 83-inch long, 12-inch tall box on top of the roof—weighing 146 lb including hardware—definitely made a dent, but it didn’t wildly impact range or mpg. We managed to go 20 miles fully electric, and the trip computer indicated nearly 27 mpg over about 65 miles in a mix of freeway and suburban highways, in hybrid mode.

That’s a testament to keeping the camping setup simple and relatively light, and quite the contrast to accounts of towing with electric vehicles, which usually result in range reductions of 50% or more. That’s led some companies, like Germany’s Dethleffs and ZF, or Airstream, to see the future in electrified trailers—or towing extra batteries as part of a teardrop trailer. But all of these will be complex and cost as much as buying a second vehicle.

The Outlander Plug-In Hybrid is, in the scope of hybrid vehicle designs, an oldie but goodie. Minus some updates, it went on sale in Europe in much the same form in 2013, finally reaching the U.S. in 2017. It was for several years in the past decade the top-selling plug-in SUV in the world, and in 2020 it remained the top-selling PHEV in Europe.

The test vehicle’s Quartz Brown Metallic paint fit the mission perfectly, and fit and finish were exceptionally good—without any kind of squeak or rattle. That near perfection in the details largely echoes the experience I had a couple of weeks later with a non-hybrid 2022 Outlander—a completely different, redesigned vehicle that feels more upscale. A redesigned PHEV based on that model is due for the 2023 model year, but I’m not as won over on its space efficiency as this vehicle.

As in previous drives, the Mitsubishi Outlander Plug-In Hybrid leaves me with a set of conflicting impressions. The design is definitely dated inside and out, although the clean, simple styling of some of the details within the cabin and dash feel refreshingly, delightfully simple compared to some of the overly complex layouts and capacitive “buttons” in many newer models.

On the road, the mixed messaging continues, with a loose, bouncy feel over mottled surfaces and quaking motions around imperfectly surfaced corners. And lots of small adjustments are needed in straight-line cruising. But that’s all countered with some good behavior: precise steering off-center and a suspension that loads up and does exactly what it should around tight corners, if you’re okay with all the lean.

Still one of the best plug-in hybrid systems

All that said, the hybrid system in the Outlander PHEV remains top-notch among its peer set today, and better than the propulsion systems in some rival brands’ hybrids. The reason? The torque from the electric motors is always there when you need it, instantly; there’s none of the delay you’ll find in some other configurations on the market—like most Toyota hybrids.

The system uses two traction motors, one at the front and rear axles, plus a third motor in front that operates as a generator most of the time, and a hydraulic clutch that can smoothly bring the engine in and out of a direct connection to the front wheels. With improvements for 2021—bigger engine and stronger rear motor—total system output is now 221 hp, 31 hp more than the previous version.

Even with this year’s boost, the PHEV isn’t quick. With all its power sources on, it gets to 60 mph in about nine seconds—roughly the same as the Toyota RAV4 Prime in its slower all-electric mode.

Mitsubishi gives you a potentially overwhelming array of choices in the Outlander PHEV. In addition to six (!) levels of brake regeneration from B0 to B5, there’s a Battery Charge mode, a Battery Save button, and an EV Priority button that locks in all-electric, unless you floor the accelerator, go above 83 mph (now higher than before), or need the defroster. The heat is resistive, though, and doesn’t require an engine start. Snow and Sport modes have also been added, as well as a Lock mode for traction, and there’s also an Eco button that softens responses and uses the climate control more sparingly.

Back to the tent, the Condor’s 146 lb means that removing the whole unit from the roof is probably going to take four people to be comfortable, although two could do it.

Add two adults and a child inside and you’re still well within the maximum static (parked vehicle) roof load of nearly any vehicle that offers a roof rack, while the tent itself is within most dynamic (moving vehicle) ratings.

Unfurling the Roofnest is a cinch, and closing it back up is nearly as easy. You merely undo two compression straps on the right side of the vehicle, then release two clamps, giving the lid a light lift. From just inside, you pull a lightweight ladder down, with the platform extending outward past the side of the vehicle, and extend its telescopic sections to suit the height. Once you’re up on it, give the lid another boost upward and props do the work, erecting the tent the rest of the way. Walk around the vehicle and you can prop rain flaps outward, but really that’s about it.

Crawl up and into the tent and the floor feels soft but sturdy—a three-inch foam mattress that honestly puts many hotel mattresses to shame, over a honeycomb aluminum floor. Rain flaps do double duty as a privacy shield if you’re allowing airflow. The queen size will easily fit two comfortably—although we didn’t sleep in the Roofnest though, as it was during one of this summer’s several heat waves well exceeding 100 degrees.

A lot of uncertainties about the design are quelled the moment you’re inside. The walls of the tent are sturdy, tight, and well reinforced; there’s no need to worry about rolling downward. You’re far up off the ground, away from critters and insects—as well as standing water, thorny brambles, poison ivy, and the like. And with LED lighting underneath the unit, this would be far, far easier to set up in the dark than any tent or other kind of pop-up camper. The only thing tricky, we found, is remembering exactly where the ladder is and where to hold onto when getting out of it.

Behind the 2021 PHEV’s slight boost in range is a slightly larger battery pack, at 13.8 kilowatt-hours, up from 12.0 kwh before. In GT trim, the Outlander PHEV includes two AC power outlets in back, good for 1,500 watts, which Mitsubishi notes is enough to power nearly any small appliance, like a coffee maker, toaster, or electric grill. It also means you could bring along a mini-fridge, game console, or TV. And they’ll run for many, many hours as long as there’s power left in the battery pack. While that doesn’t fit with the minimalist camping thing, parents with smaller kids might be relieved to have the option.

The Outlander Plug-In Hybrid I drove was the SEL version, so it didn’t have that capability, but it did have a reasonable price, as well as a reasonably straightforward, quick 8.0-inch infotainment system with Apple CarPlay and Android Auto, plus things like heated side mirrors, power heated seats, a power liftgate, and other things you don’t expect to see in a base model. The SEL starts at $37,490, and mine totaled just $37,710. The mid-range LE and top GT start at $39,190 and $43,190, respectively. All these versions qualify for $6,587 under the federal EV tax credit program—potentially punching the price as tested to less than $31,000.

As for the Roofnest, it costs $3,095 as equipped, while the XL version—think King mattress rather than Queen—costs $3,295.

As I look at takeaways, the combination of a trail-capable plug-in hybrid (or electric vehicle) and a cleverly packaged, weathertight bed on the roof could help people get outside without towing an RV or camper—or, perhaps, get them well past where they would have had to park the camper.

The Roofnest is a great complement to plug-in hybrids. Why? You can leave it installed all the time around town, likely with a negligible effect on range if it’s low-speed. Then when you’re ready for a highway trip, or a trip out to a trailhead you want to hit at dawn, it’s all set.