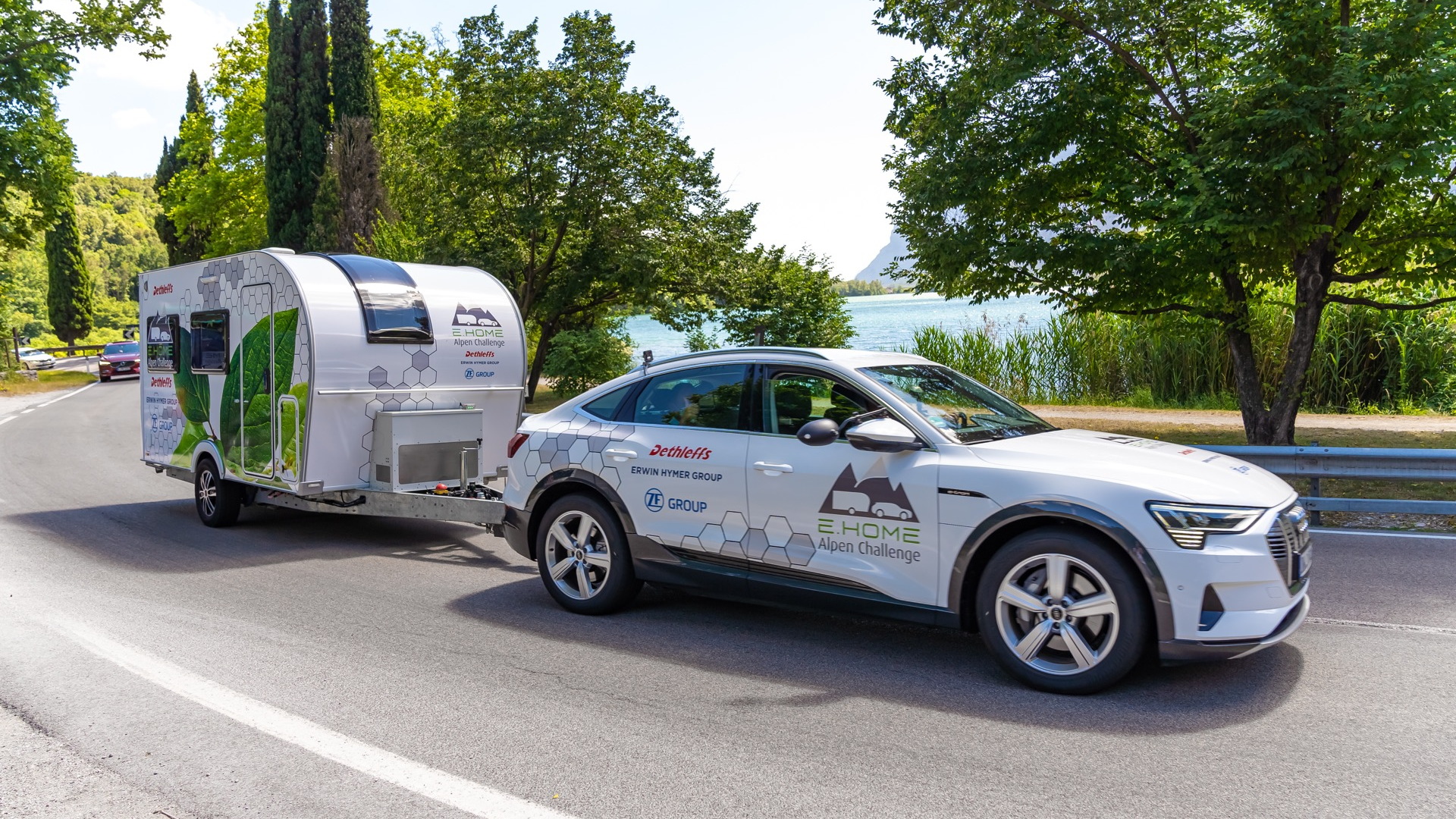 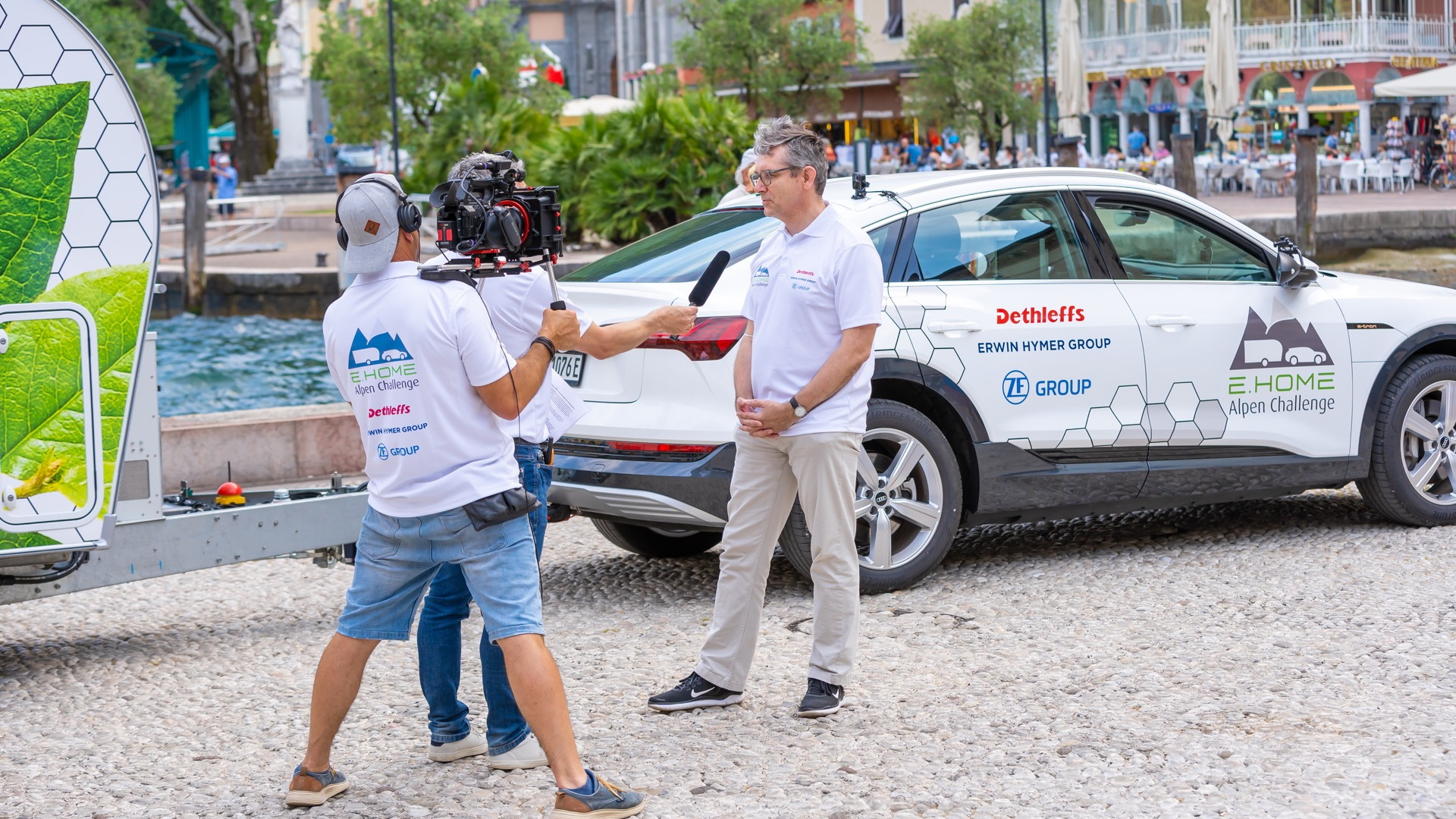 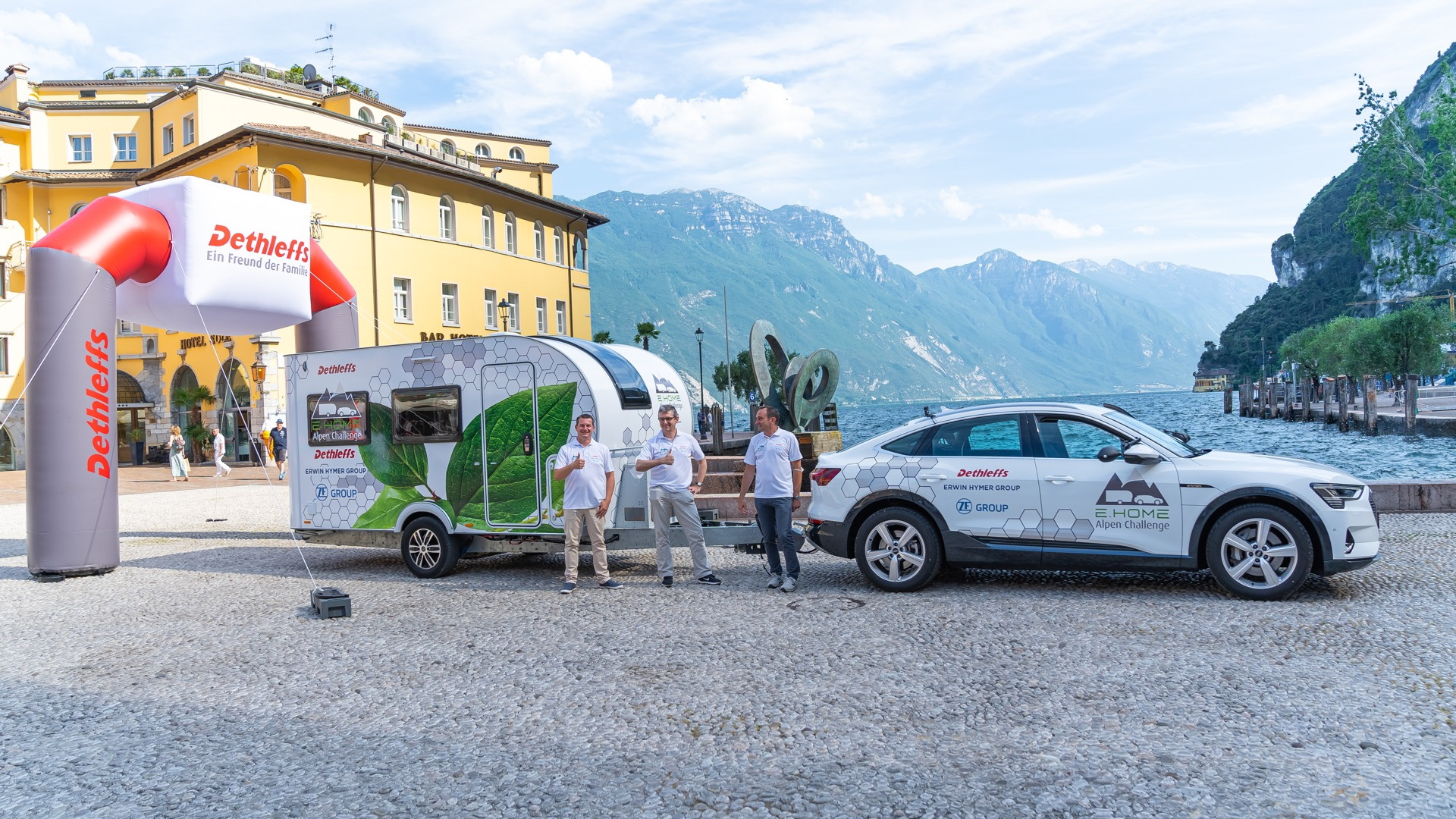 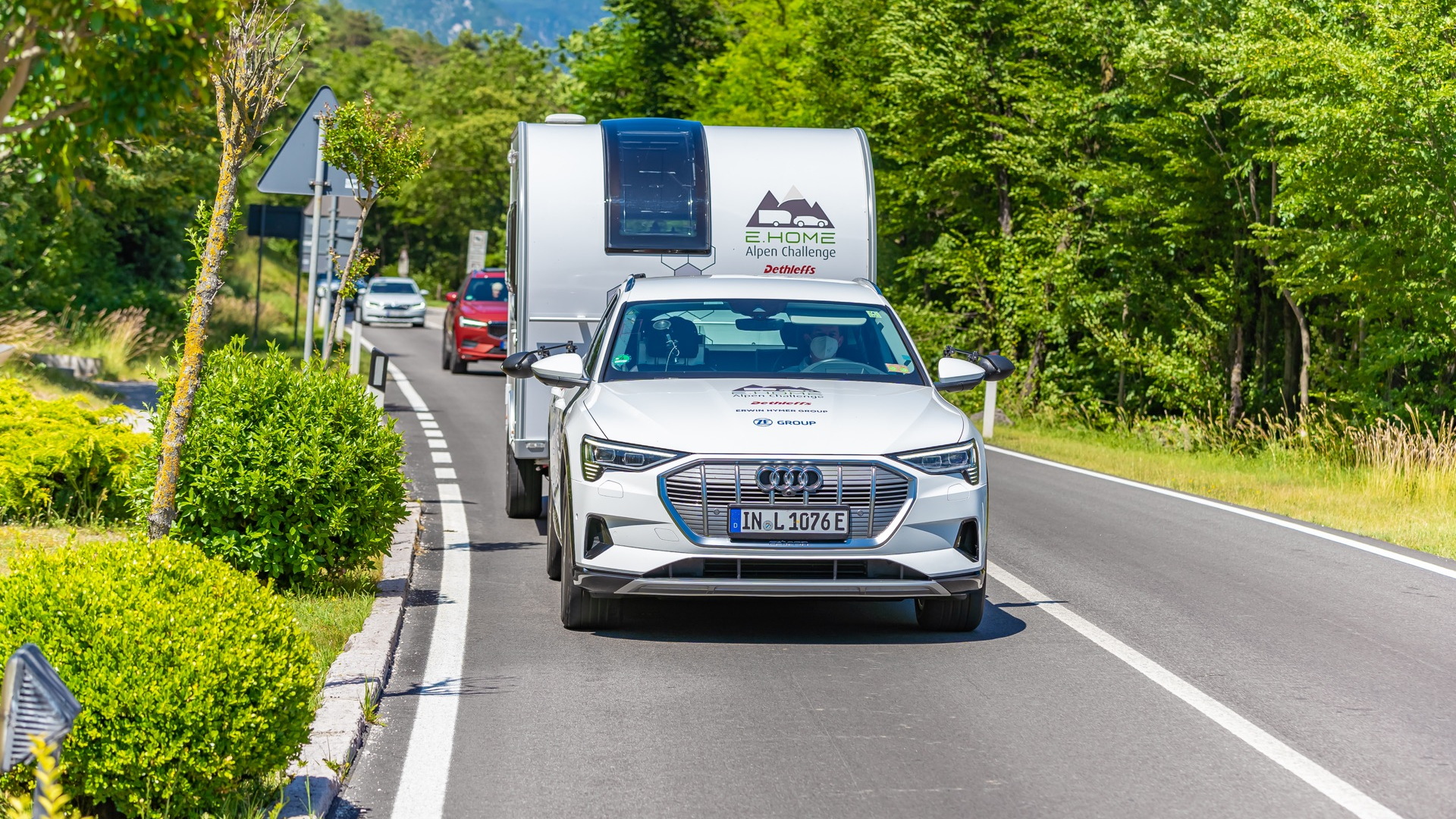 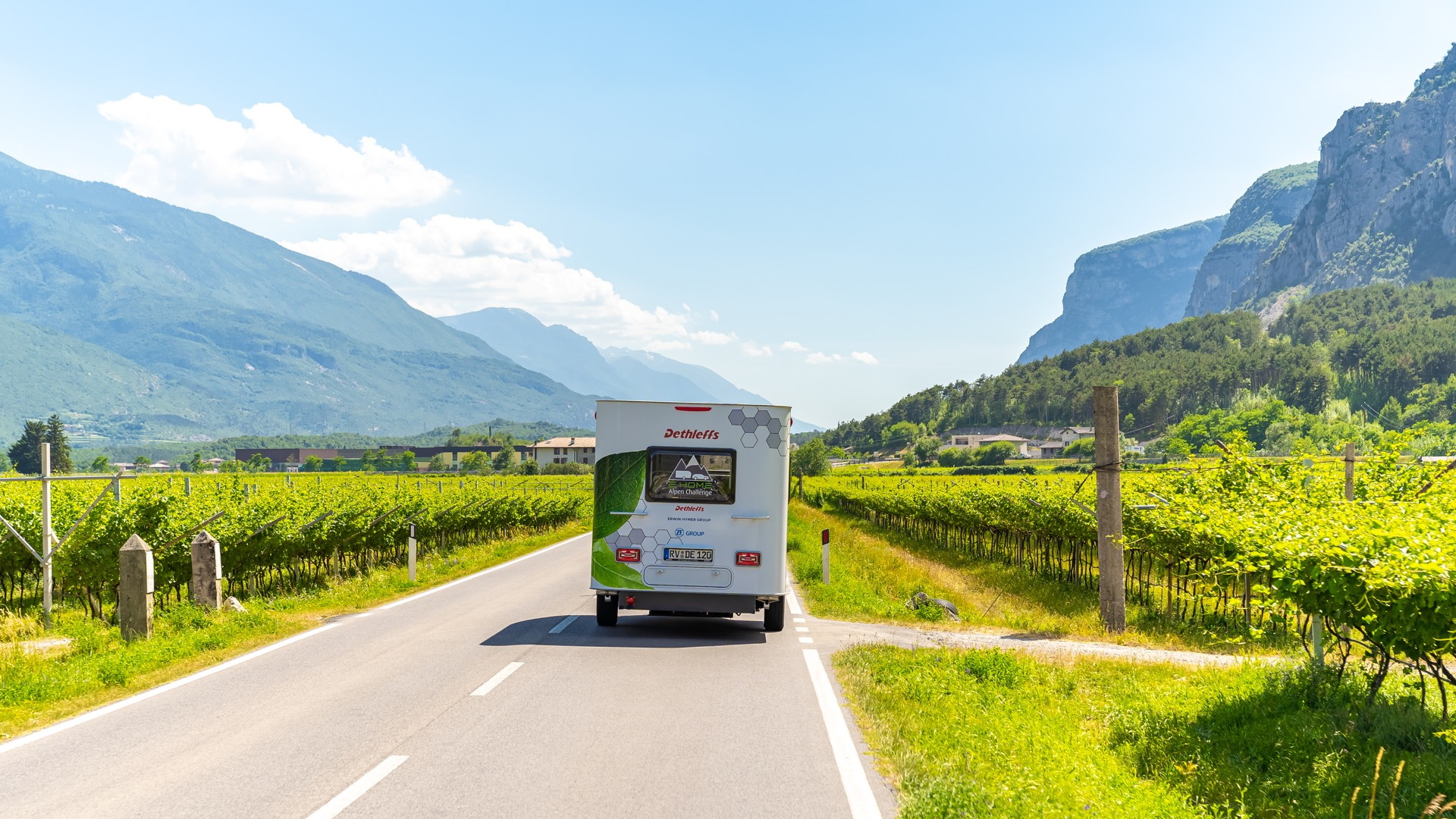 An electric trailer could solve the largest problem when towing with an electric vehicle: You might only go half the distance on a charge while towing.

To compensate, EV shoppers who plan to tow beyond city limits need to opt for the largest possible battery pack. But that means you’re hauling around many hundreds of pounds of extra batteries and environmental footprint the rest of the year—batteries you probably don’t need for the daily commute or trips without the trailer.

So the German travel-trailer and motorhome maker Dethleffs has a potential game-changer—especially when you consider the electric trailers might be rented when needed and can interface with a wide range of vehicles. It's engineered and developed the E.Home Caravan prototype it originally presented in idea form as the E.Home Coco in 2018, with help from the trip-planning firm Erwin Hymer and the auto-industry supplier ZF.

The route, which started at the company’s factory in Isny im Allgäu, Germany, took them over Brenner Pass and ends on the northern shore of Lake Garda, Italy.

The system provides acceleration equivalent to what the E-Tron would otherwise offer as a solo vehicle, and the setup is calibrated to enhance stability. It should also be pointed out that the pace on the mountain route was leisurely, with the team taking more than six hours to cover the 240 miles.

After pushing against a strong headwind for part of the trip, the E-Tron and trailer reached the destination with 82 kwh used by the E-Tron and 74 kwh used by the trailer. The E.Home Caravan prototype has two battery modules, each with about 40 kwh, with one in front of the axle and the other behind it. The trailer can also provide power out for other camping needs, or support solar cells on the roof. It can be charged at up to 7.2 kw on AC, and it’s compatible with 50-kw DC fast-charging.

The batteries are contained within an inner frame, while an outer frame houses the inverter, charging unit, and control unit. There’s a protective honeycomb crash structure at the rear, and the company says that it’s completed various simulations for stability and reliability.

The batteries plus drive system add up to about 1,320 pounds to the weight of the trailer, and although the supplier didn’t provide a total, it’s well within the E-Tron’s rated 4,000 pounds. It plans to cut the weight to about 880 pounds in the forthcoming production version. To compare, the E-Tron SUV’s battery pack amounts to 1,573 pounds.

The drive unit for the trailer, developed by ZF, has two offset electric motors making 30 kw of continuous power (40 hp) each, or a max of 90 kw (121 hp) each. Each motor also makes a maximum 66 lb-ft of torque, but with the 16:1 reduction ratio it amounts to 1,062 lb-ft at the wheels. When the vehicle is slowing, the motors provide gentle regenerative braking and feed energy back into the battery pack. Disc brakes are hydraulically actuated and blended.

The most complex piece of kit in the setup might well be the active towing load feature for the Trailer Mobility Control unit, which adds only enough thrust from the trailer to maintain a constant towing load on the tow bar. It’s designed to be towed with a relatively low amount of power from the tow vehicle—adding more regen down hills to maintain that—and it detects and compensates for crosswinds or corners.

Dethleffs says that the E.Home Caravan is “a future-proof solution” and would be good for internal combustion models as well, as it would allow models with less powerful engines to tow a greater load.

Another benefit is a smartphone app-based parking system that helps guide the trailer precisely into its spot, more easily than backing in with the tow vehicle.

Audi deserves props for highlighting the issue in a straightforward way. In February 2020 it towed a 4,000-pound trailer containing a GM EV1—the first modern electric car—from Tulsa, Oklahoma, to Austin, Texas, for an EV event. Over 504 miles in 35-degree weather, Audi averaged just 1.3 miles per kilowatt hour. That calculated out, given the E-Tron’s former 83.6-kwh usable range, to less than 110 miles per full charge—a nearly 50% reduction from the E-Tron’s expected EPA range.

That was no anomaly. Over a 7,700-mile trip in 2019, friends of Green Car Reports saw a range cut of 45 to 60 percent when pulling a 3,800-pound travel trailer with their Tesla Model X rated to pull 5,000 pounds—amounting to a real-world range of well under 200 miles and bringing some logistical challenges (including Supercharger stalls that weren’t towing-friendly) that Tesla owners wouldn’t otherwise have to confront.

As Dethleffs outlines, the E-Home Caravan isn’t yet legal in Europe. But with the support of the German Federal Ministry of Transport and a research initiative from RV companies, the testing process is underway and a framework could be adopted in the near future.

In the U.S. there would be similar challenges with certification, although Dethleffs hasn’t confirmed anything about bringing it to this continent yet. It isn’t the only company to suggest such an idea, though: Airstream announced in February that it’s pursuing electric travel trailers; Lordstown Motors last year announced a partnership with Camping World that aims to produce an electrified travel trailer as soon as 2022, with an electric RV to come later.

Soon, perhaps, it’ll just be a matter of renting an electrified trailer, connecting an interface, and getting a boost as you tow with an electric truck—and a much lighter footprint.