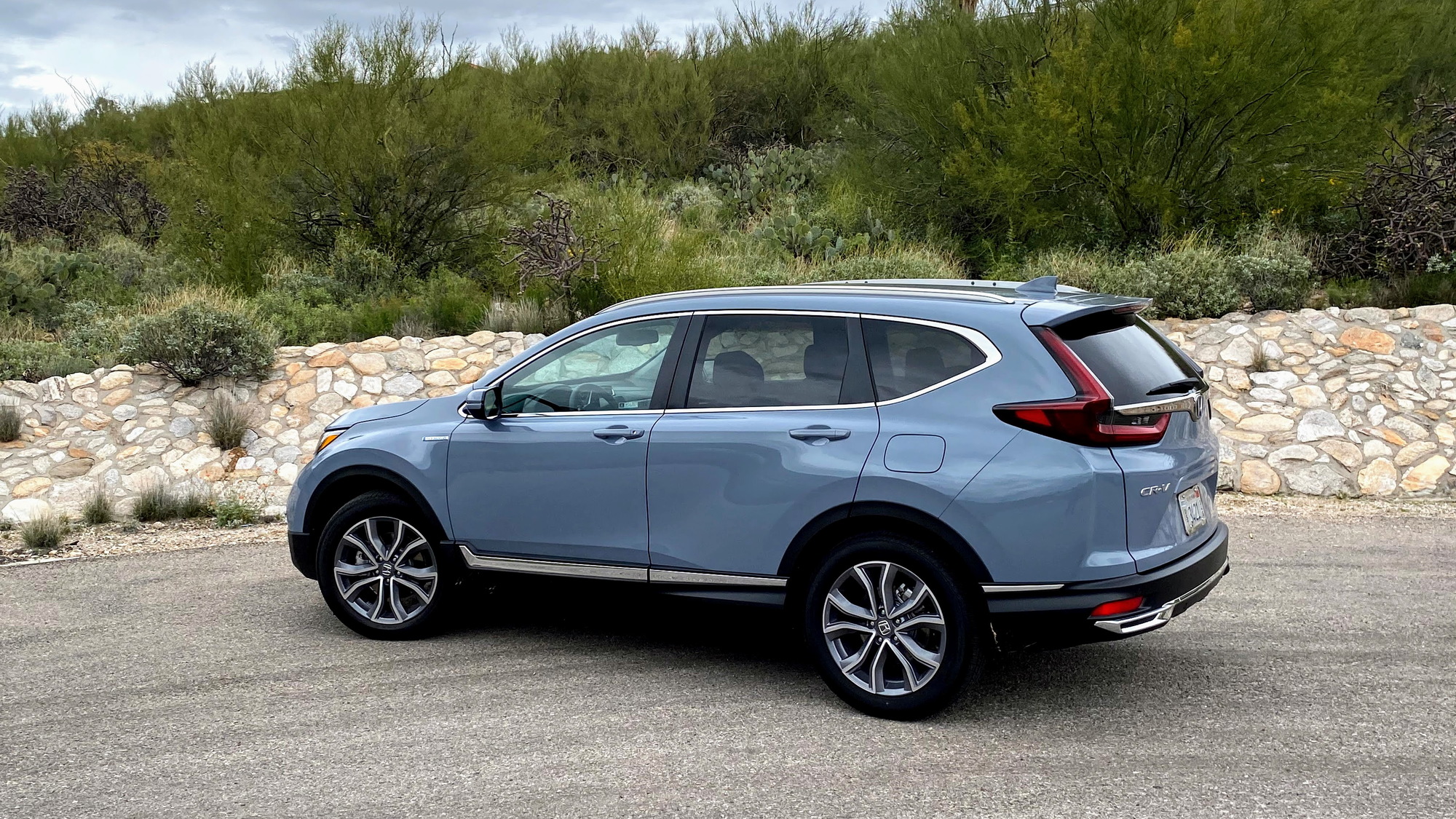 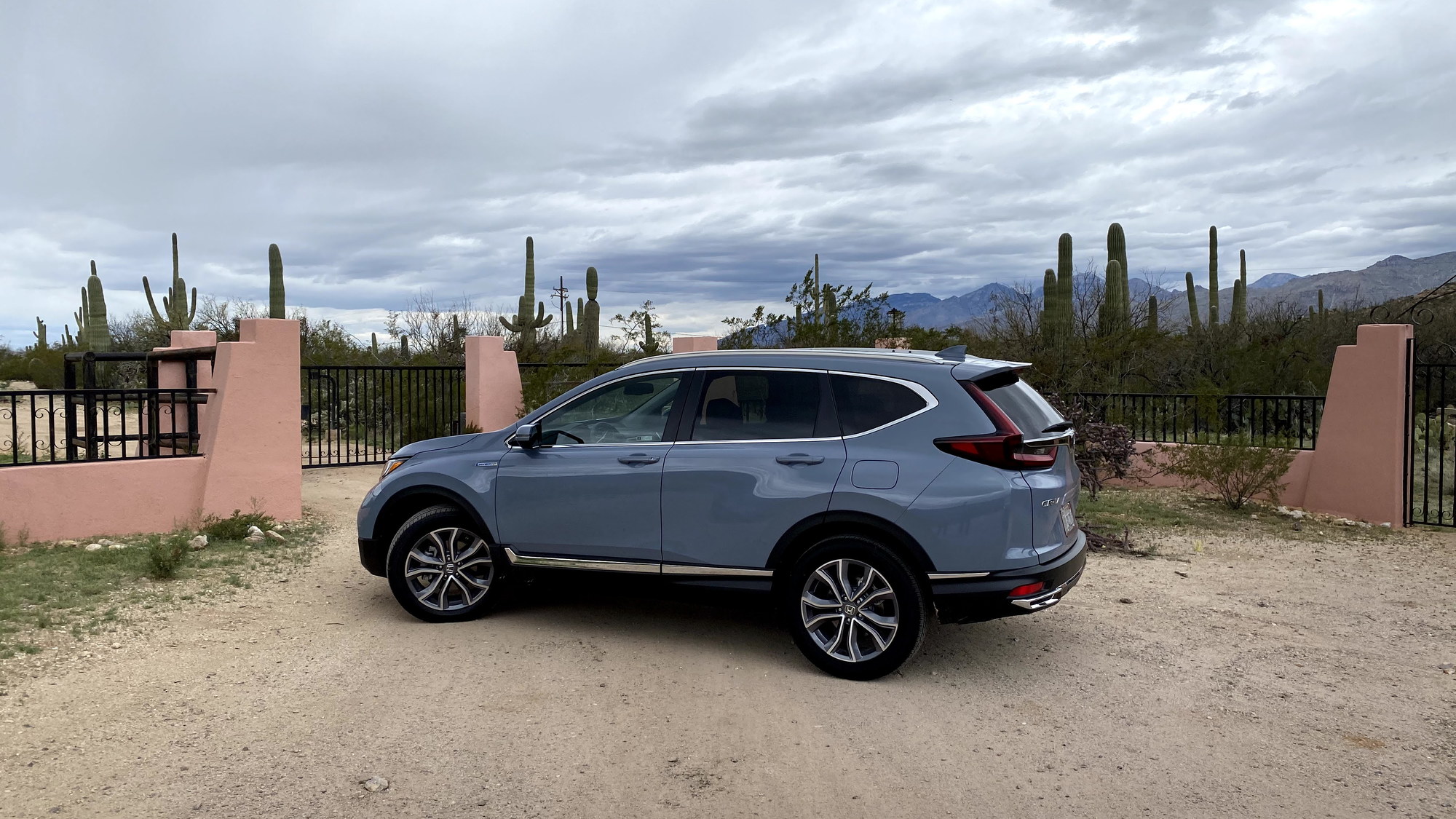 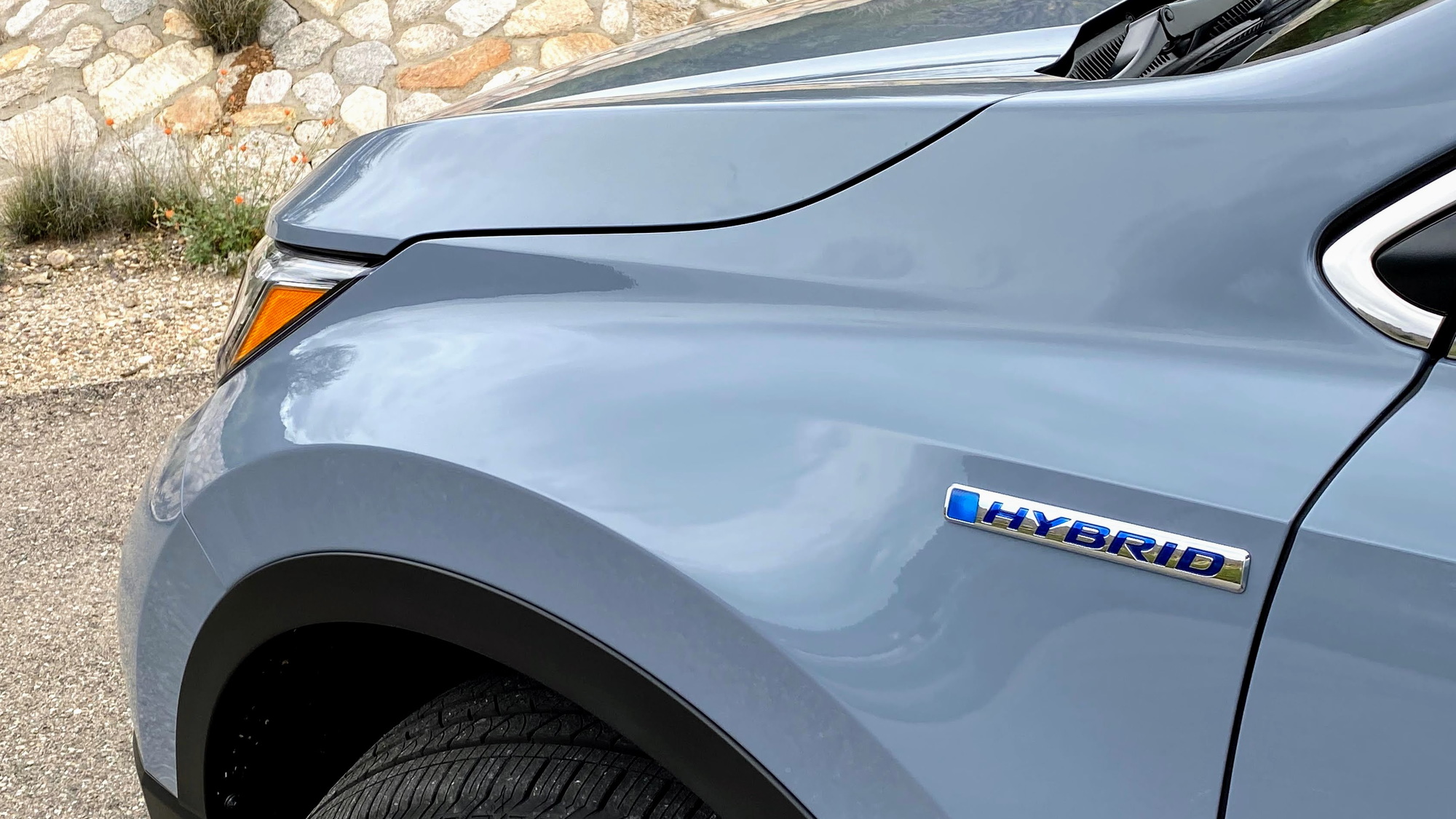 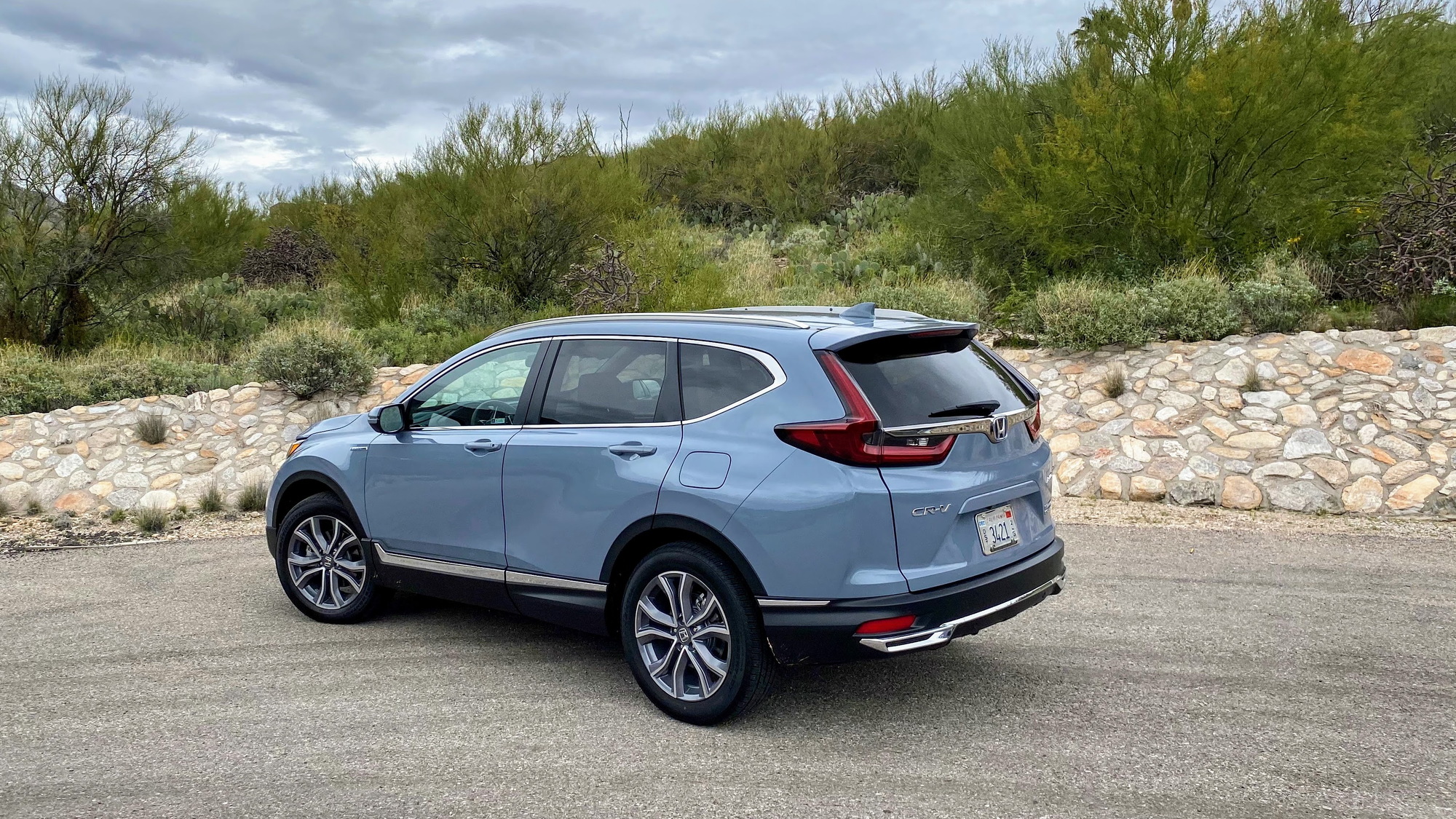 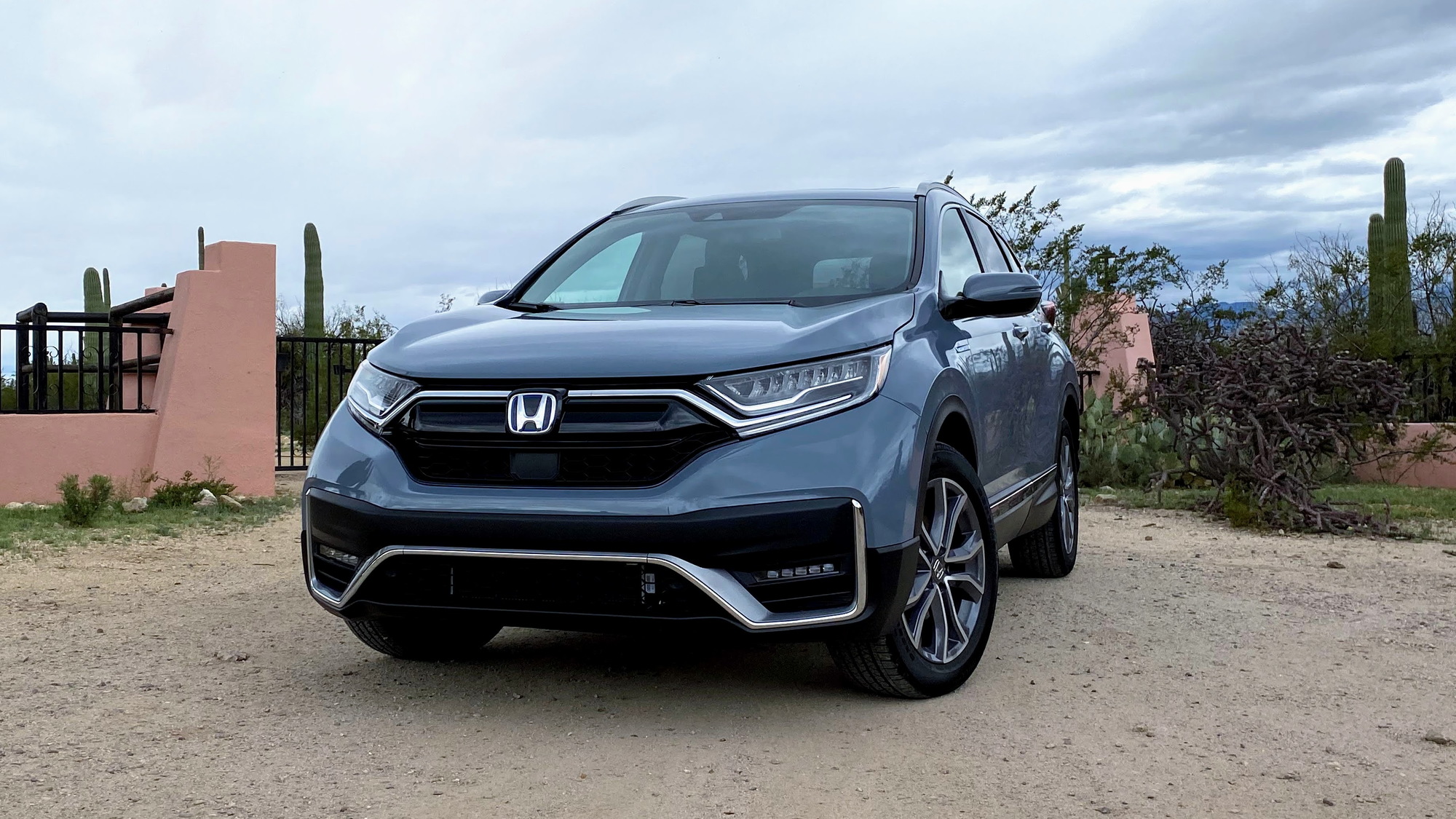 In the Zen environs around Tucson, Arizona, this past week, It didn’t take any level of meditation to understand what the 2020 Honda CR-V Hybrid brings to the increasingly crowded cohort of compact hybrid crossovers: poise.

The CR-V Hybrid drove with the flow along stop-and-go boulevards, and it felt easy to pilot as my co-driver and I skirted the fringes of Tucson on rippled two-laners in the awesome backdrop of the jagged Santa Catalina Mountains and the contrasting Sonoran Desert, still warm and watercolor-esque despite gray skies.

And for the moment—for someone who writes about cars—it seemed equally eye-opening that the CR-V Hybrid made me feel so at ease and able to enjoy conversation and the backdrop.

Like the Toyota RAV4 Hybrid and the Ford Escape Hybrid, the CR-V Hybrid is softly sprung and leans a fair amount in corners. The CR-V Hybrid has light, precise steering, good straight-ahead tracking despite some crosswinds, and a cabin kept quiet from road and wind noise. But the biggest confidence-builder was the lock-step predictability of the power delivery from under the hood to the wheels.

Unlike most hybrid powertrains, this system doesn’t have flat spots or lumpy transitions between power sources, and generally speaking the CR-V Hybrid feels like it goes predictably. As you lift off the accelerator and slow into a corner, then apply the accelerator back out, you know exactly how it’s going to respond.

That’s because the CR-V Hybrid uses electric-motor propulsion the vast majority of the time—direct through reduction gearing, not through a transmission—just like a battery-electric car, but with the same mechanical all-wheel drive system (Real Time AWD) carried over from the gasoline CR-V.

The best CR-V is one that feels very electric

The goal in the way it’s all configured, according to product planner Brett Watanabe, was simply to make the Hybrid, “the cream of the crop—the best CR-V you can buy.” And that’s for the most part a claim that holds true in what we’ve covered so far—the way this model drives, its acceleration, and its efficiency.

To arrive at that unique set of bona fides, Honda’s two-motor hybrid system carries over directly from the Accord Hybrid to the CR-V Hybrid with some minor efficiency improvements to the 2.0-liter Atkinson-cycle four-cylinder engine. Honda's first electrified light truck for the U.S. market is a series hybrid system most of the time, which means that the gasoline engine primarily powers one of the motors as a generator (which starts the engine when needed), while the other is the traction motor. But it sometimes works as a parallel hybrid, clutching the engine into the power flow at a tall cruising ratio.

There’s no need for a traditional transmission or power-split device—just a clutch—and with the generator capable of mostly powering the electric motor, the battery can be a smaller energy buffer than in comparable hybrids (just 1.4 kwh here), so the setup saves weight on multiple counts.

The result is a combined 212 horsepower for the system, with a maximum of 232 pound-feet of torque delivered by the electric motor. EPA fuel economy ratings arrive at 40 mpg city, 35 highway, 38 combined for the CR-V Hybrid, versus 27/33/29 mpg for the standard CR-V all-wheel drive and 41/38/40 mpg for the RAV4 Hybrid.

The CR-V Hybrid claims to have best-in-class torque and better off-the-line acceleration than the standard CR-V, but Honda doesn’t release the official U.S.-market acceleration numbers to support that claim. Based on specs released for overseas markets plus our own stopwatch app, it takes about nine seconds to 60 mph.

From a standing start the Hybrid feels like it bogs down for a moment, not exactly showing off the torque potential of electric motors—and possibly a downside of the mechanical AWD system. Floor the accelerator at 5 mph and it’s a different thing, however—the CR-V quietly lunges forward with an urge passengers just wouldn’t expect here. From there, a second or so in, the engine comes awake to keep electrons flowing to the motor, and the acceleration feels impressively urgent until about 40 mph, where the advantage fades. From 40 to 70 mph or so, we’d be hard-pressed to call a winner between the hybrid and the standard version.

Set up for the city

One thing that rings true in the CR-V Hybrid, just as in the Insight and Accord Hybrid, is the two-motor hybrid system’s efficiency strengths in city driving. At lower speeds, even in stop-and-go, you might exceed those EPA ratings sometimes; but on the highway the CR-V’s tall body and the very limited use of the system’s mode where it clutches the engine in directly—from around 45 miles per hour to potentially past 70 mph, depending on the load, battery charge, and other conditions—add up to a system that’s a little less sorted at U.S. speeds.

Full admission, that’s a scenario that Honda had us avoiding during the test-drive opportunity and its route, and we hope to revisit some American-style Interstate highway driving with the CR-V Hybrid at a later date.

That said, there are some details in the CR-V Hybrid that add to the feeling that you’re driving a vehicle that’s utterly predictable (and EV-like). The CR-V coasts with very light drag in its standard Drive mode, but each pull of the left steering-wheel paddle brings more brake regeneration—signaled by one, two, or three downward arrows. In the third, most aggressive mode it’s enough where your passenger will notice if you let off the accelerator too quickly, but you’ll still most definitely need to use the brakes.

Sport, Eco, and EV modes allow a bit more control over accelerator sensitivity and how often the engine comes on. Sport mode leaves the engine on and proactively loads up the battery. Trying to drive in a sporty fashion in the normal or Eco modes can result in more engine revving than just using Sport. Sport mode also repurposes a noise-cancellation feature from the sound-system’s speakers into an Active Sound Control feature supplementing engine sound, which is an unnecessary addition.

Good for the snow...and the sandbox

The CR-V Hybrid is only offered with all-wheel drive; and to demonstrate the prowess of that system, Honda had us play in a sandbox of sorts. With the system carried over, you get the same Snow, Mud, and Sand modes for all-wheel drive and, just as in the CR-V, it sends power mostly to the front wheels, redirecting torque to the rear wheels when needed—and allowing levels of wheelspin in those modes.

In the sandbox, the CR-V Hybrid was utterly smooth, with a muted but even-keeled response to inputs, whereas a RAV4 Hybrid brought in for demonstration used its rear motor in fits and starts for a much more juddering experience.

Visually, the differences are limited versus the gasoline CR-V. Hybrids have an exclusive 5-LED foglamp design, a blue Honda badge, and the tailpipe is tucked under the bumper fascia in a “hidden” exhaust tip, as if embarrassed of its internal-combustion engine.

Inside, the CR-V Hybrid gets steering-wheel paddles for brake regeneration, along with a push-button shifter and a new center-console design that has two layers of bins (with the divider in the middle allowing one especially large compartment, if that’s what you wish). The gauge cluster is “hybrid-specific,” and in some versions it includes a Qi wireless charger for smartphones.

Seating and cargo is virtually unchanged versus other CR-V models. Rear cushions are 60/40-split and fold down to a flat cargo floor. I like how much window space is available in the back seat; it feels bright.

Since the CR-V often operates on EV power at lower speeds, it has a pedestrian acoustic-alert system that would fade out at 21 or 22 mph. A full suite of driver-assistance safety features—including automatic emergency braking—is standard here.

The CR-V Hybrid will be built in Indiana, with its two-motor hybrid system and engine sourced from a plant in Ohio

A good deal, but not a bargain

The test car I drove was a top-of-the-line Touring trim, adding up to $37,070 including the $1,120 destination fee. It comes loaded with premium sound, wireless phone charging, and a built-in navigation system that got tripped-up when we tried to get back to our route.

While we’d probably advise against the $28,870 base version and its more limited feature set, we tend to think the EX, at $31,380, is probably the best value, as it subs in a larger 7.0-inch touchscreen with Apple CarPlay and Android Auto compatibility plus heated front seats, a power driver seat, dual-zone climate control, push-button start, upgraded wheels, a moonroof, and blind-spot monitors—which sounds collectively like a great starting point for shoppers using this as a primary family vehicle.

Really, that’s what the CR-V Hybrid is shaping up to be—a good all-round vehicle for a small urban family that for whatever reason isn’t yet the plug-in type. And until the arrival of the Toyota RAV4 Prime and Escape Plug-In Hybrid later this year, it offers the closest thing to an electric-vehicle driving experience anyhow.