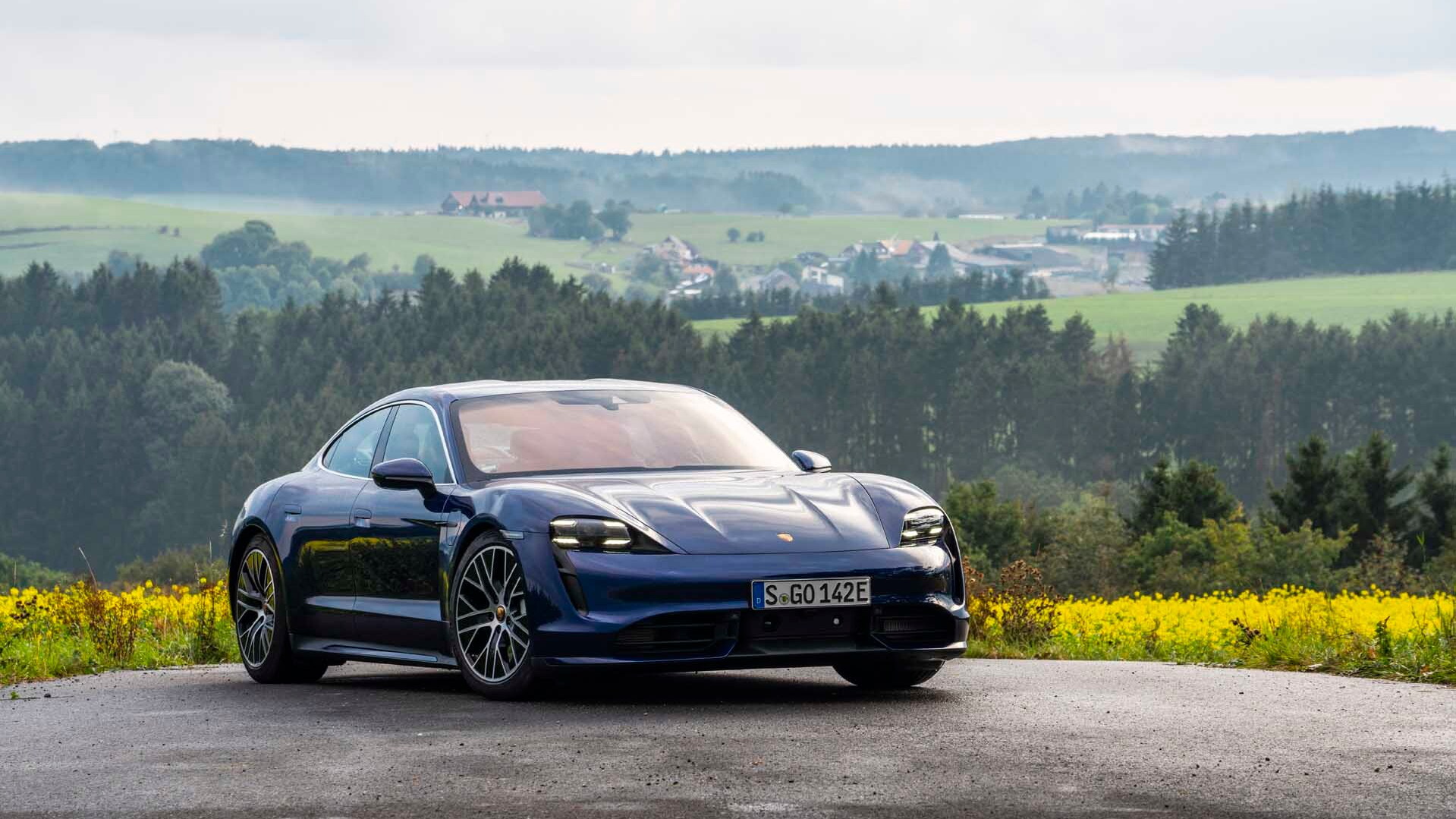 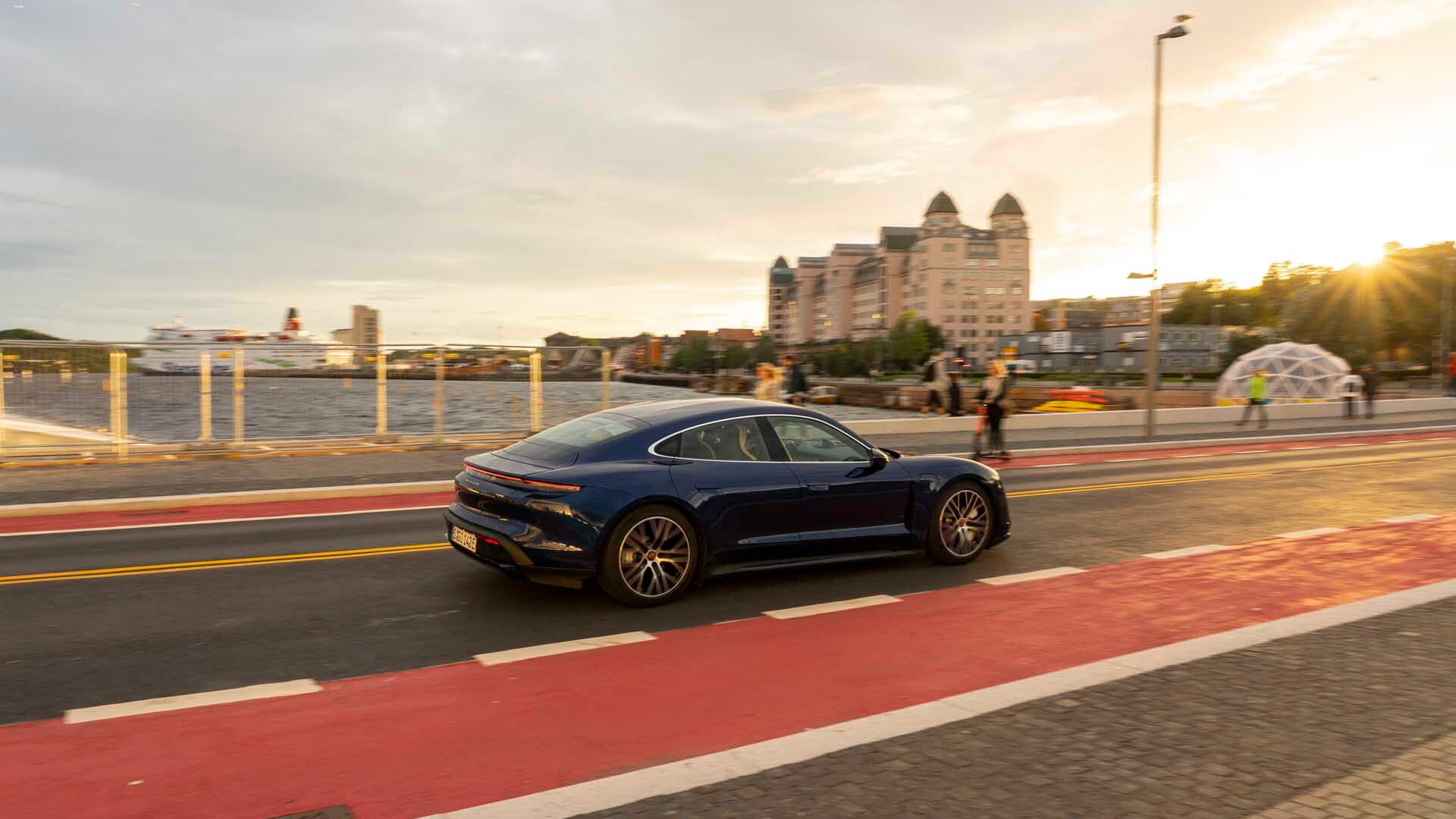 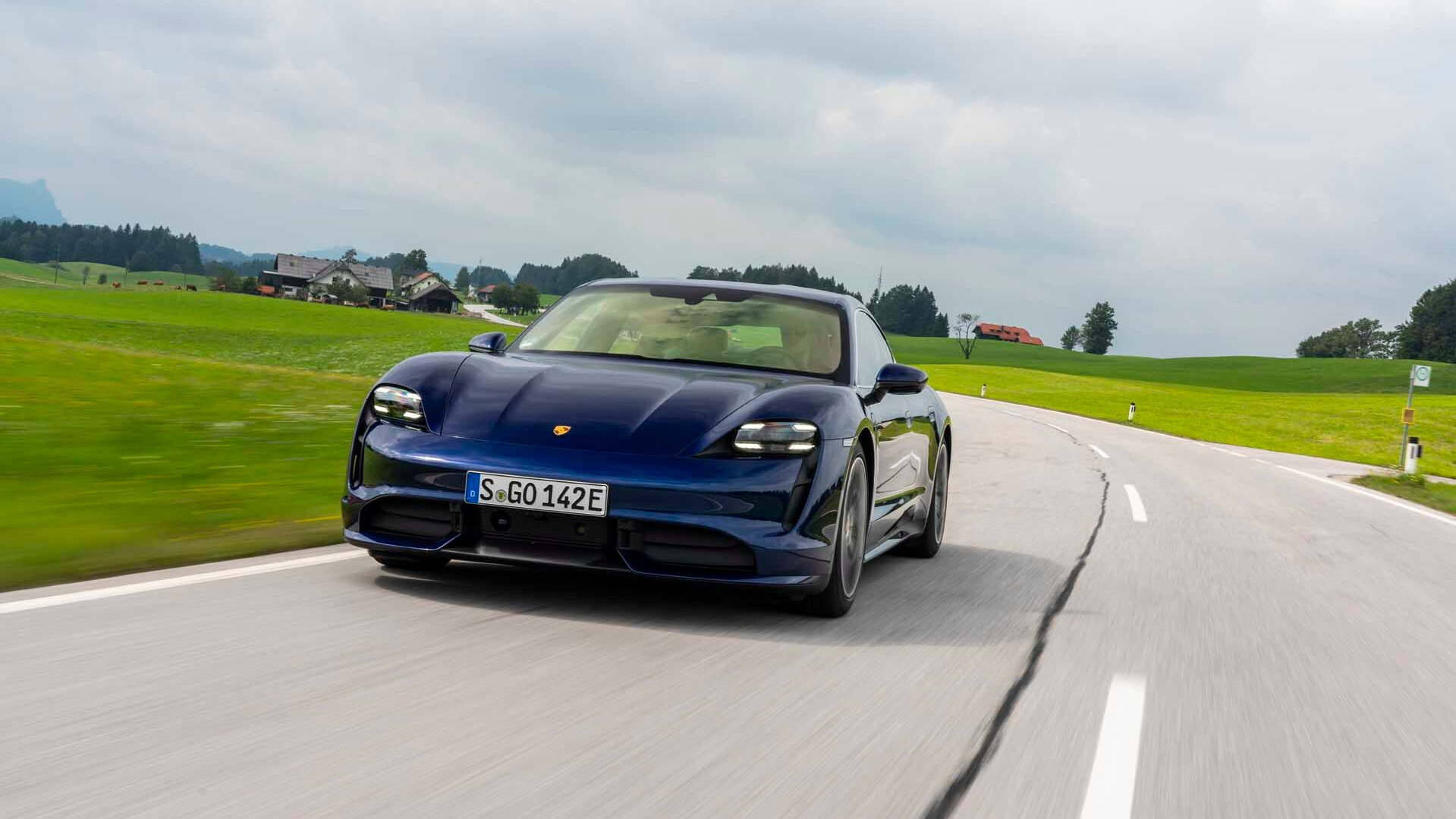 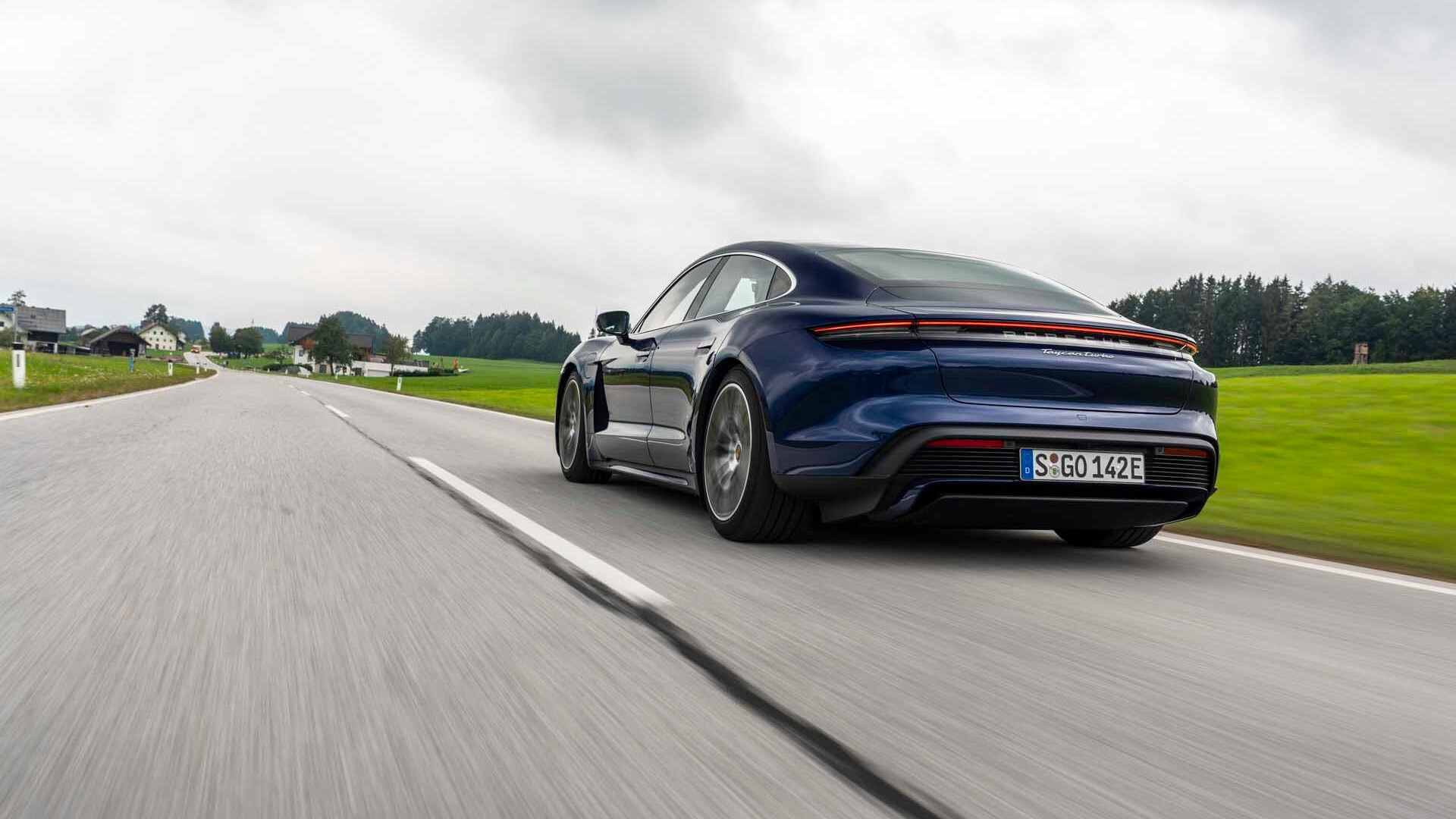 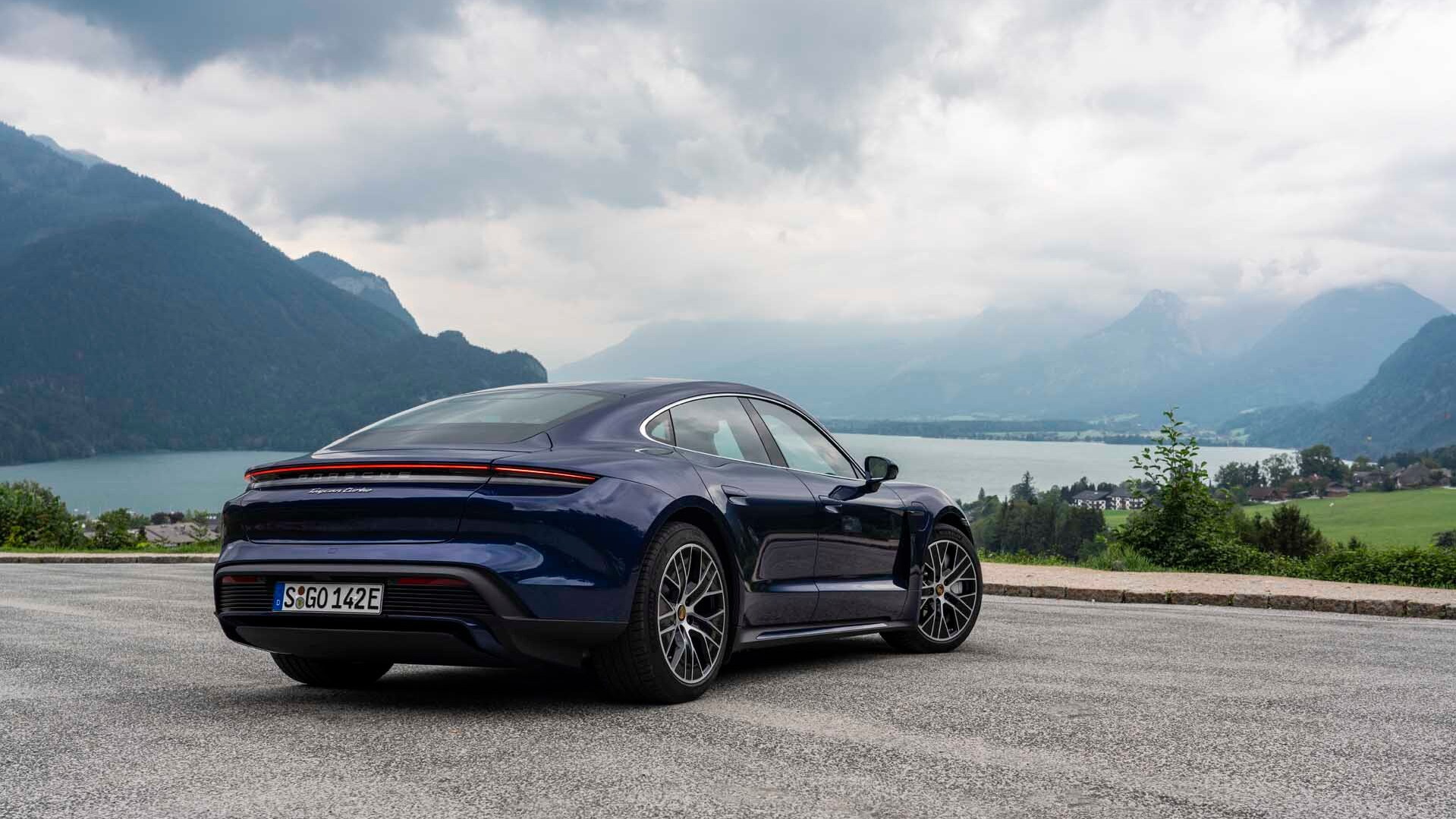 The hard work for Porsche was done before the first car hit the street.

Before the 2020 Porsche Taycan turned its first all-electric mile not only had we all accepted that the legendary sports-car maker could build and sell an all-electric sedan—the only sedan they’ve ever made—but also that it was inevitable.

In a blink, we accepted that the Porsche electric car could charge faster than nearly every other electric car, and that it had more inside screens than an NBA pick and roll.

What we didn’t accept? Just the use of word “Turbo” for a car that couldn’t care less anyway.

The 2020 Porsche Taycan Turbo is the next evolution for electric vehicles and pushes EV performance past straight-line acceleration and party tricks into supercar realms. It’s a rival for the Tesla Model S in the sense that they’re both cars with four wheels—five if you count the steering wheel. Beyond those, the Taycan and Model S share fewer similarities than the surface of the sun and a grilled cheese sandwich.

The Porsche Taycan barely seats four, likely has a rated range around 250 miles, and doesn’t pretend to be much more than a sports car. Porsche doesn’t recklessly pretend the Taycan can drive itself with poorly named software: if you’re asking it to take the wheel from you, you’ve missed the point.

The Taycan doesn’t do much of the “electric car” things anyway. It’s a pure performance machine that happens to run on electricity. You get the feeling that if Porsche’s performance engineers discovered that a cat-powered car could perform better, we’d be talking about the world’s first four-door that runs on a herd of tabbies.

We’d also have to find a way to talk about more than 700 horsepower in terms of cats, too.

Initiating launch control is as easy as mashing the brake pedal to the floor and stepping on the accelerator until a message appears in the right-hand screen and a tone plays from the speakers. From there, in the Taycan Turbo, the world blurs in 3.0 seconds up to 60 mph. In the Turbo S, violence happens. The Turbo S launches with such incredible force in its 2.6 seconds up to 60 mph, thanks to wide 305-mm rear tires, that eyes blur and lungs press into the back of rib cages.

The two-speed rear transmission shifts around 50 mph, seamlessly in Range, Normal, and Sport modes but with a pronounced step in Sport+ mode that adds an artificial, baritone whir that doesn’t sound especially pleasant. (The transmission downshifits around 25 mph with a similarly artificial blip in Sport+ mode, too.)

Although the official time between the Taycan Turbo S and the Model S would indicate a winner for the latter by about two to three-tenths of a tick, the Porsche’s attitude is different. Its rear tires are wider than the Model S’ staggered setup by 40 mm, and despite rainy launches in Denmark, the Taycan Turbo S is without a hiccup thanks to the wide rubber. Like the Tesla, the Porsche’s launch is figuratively and literally breathtaking, and for unaware passengers, potentially injurious.

From there, the Porsche and Tesla run away from each other.

Put simply, the Porsche Taycan Turbo and Turbo S can take a corner, right out of the box—no changes necessary. In the Turbo S, the staggered 265/305 front-to-rear tire setup gives as much mechanical grip as a Corvette Grand Sport from the tires alone. The Porsche’s center of mass is lower than the Corvette’s, and equally dispersed between the front and rear. The Grand Sport’s lateral grip reaches nearly 1.2G—the Taycan dares you to try for more around a corner.

The optional Porsche Dynamic Chassis Control system effectively reduces that lateral motion in the cabin to nothing in hard cornering. The Taycan is flat and controlled, almost preternaturally disposed to take corners for anything that weighs more than two and a half tons unladen—about as much as a minivan.

Our drives over 600 km (370 miles) for two days required considerable electrons. Our Turbo S managed 24.4 kwh/100 km, which is roughly equivalent to about 86 MPGe. Our Turbo consumed at a slightly better rate, 25.8 kwh/100 km, but was significantly dented by several high-speed runs at more than 260 kmh (161 mph) on the unrestricted autobahn for about 70 km.

We took advantage of two high-speed Ionity charging stations in Denmark and Germany that delivered up to 80 percent state-of-charge in about 20 minutes—the final stop outside Hamburg replenished our Taycan Turbo’s battery from 2% to 80% in 22:33 with 71.223 kwh delivered at  up to 240 kw.

The Taycan has the kind of power and power delivery that requires fast charging during the day on long, spirited drives. Porsche’s 800-volt system promises and delivers both. At home, on the supplied 11-kw charger, a full charge takes overnight.

The Taycan’s ancillary performance systems complement the high-speed powertrain well. The steering is up to Porsche’s standards, which is to say that it’s light and direct with just a few degrees of on-center before the Taycan darts into the direction that the driver intended. It’s sharp and well weighted, dialing up more heft in Sport and Sport+ modes that felt on-point for the direction that we wanted.

Same goes for the suspension and stupefying massive front rotors that measure 16.5-inches, which work in tandem to deliver a sports-car experience despite the team-bus weight.

The suspension is firm but compliant, and wafts over big divots in pavement without crashing or wafting on the tall 20- or 21-inch tires. Part of that may be due to the optional PDCC and air suspension geometry. The other part? Tuning and, perhaps, magic.

Inside, the Taycan’s 114.2-inch wheelbase nominally seats four (despite a fifth seatbelt) but two is a better bet. The rear seat is cramped and wants for leg room despite plenty of foot room, thanks to the J1 platform’s “foot garage.”

It’ll be a challenge for less-than-lithe adults to clamber into the rear seats, and once aboard, anyone 5-foot-10 or taller will want for leg room and head room.

The front seats are more useful for adults, which is the point. The Taycan’s much smaller than the Panamera in the practical world, if the 195.4-inch overall length wasn’t a giveaway. Porsche calls the Taycan a C-segment sedan—comparable to the Volkswagen Golf’s interior space.

From there, the Taycan shares less in common with the Golf than a 9 iron. The Taycan drips with technology, including the available five touchscreens, and a curved digital instrument cluster.

Some of that tech works better than others: the central 10.9-inch touchscreen is useful and easily accessible. The passenger-side 10.9-inch touchscreen can be useful for the front passenger to control music and navigation settings (although the seat sensor prefers that the passenger sit nearly bolt-upright for the screen to work), but the lower 8.4-inch touchscreen for climate settings and volume is awkwardly placed at the front of the center console that takes several taps to accomplish even the smallest tasks like raising interior temp or turning down volume. (Especially the volume buttons, which are forward of the front cupholder and not easily used with a tall drink.)

As an electric car, the Taycan seems to have glossed over the rulebook.

Most notably, there are no wheel-mounted paddle shifters to control regen, and no possibility that the Taycan can ever be driven with one foot.

That’s on purpose, according to Porsche, who say that efficiency-focused models will arrive later next year, but the Taycan’s not one of them. With regen turned on and in Sport or Sport+ modes, the Taycan’s max regen is 0.39G, but it’s barely there in most driving scenarios. In Range or Normal drive modes, the Taycan “sails” with little regen if the car’s cameras don’t see any cars ahead.

There’s no way to gamify driving the Taycan for max efficiency or range, either. In our longest stint behind the wheel for more than 4 hours, we drained the Taycan’s batteries from more than 90% down to 2%. The last 10% of state of charge includes some dashboard warnings that the air conditioning would be disabled and the Taycan’s speed was loosely capped around 50 mph (although its possible to push the accelerator further past that).

It’s hardly the “limp” modes we expect from other EVs, and the Taycan complies with every request we made, batteries be damned.

That is, if you can get past their names.

Porsche provided travel and lodging to Internet Brands to bring you this firsthand report.