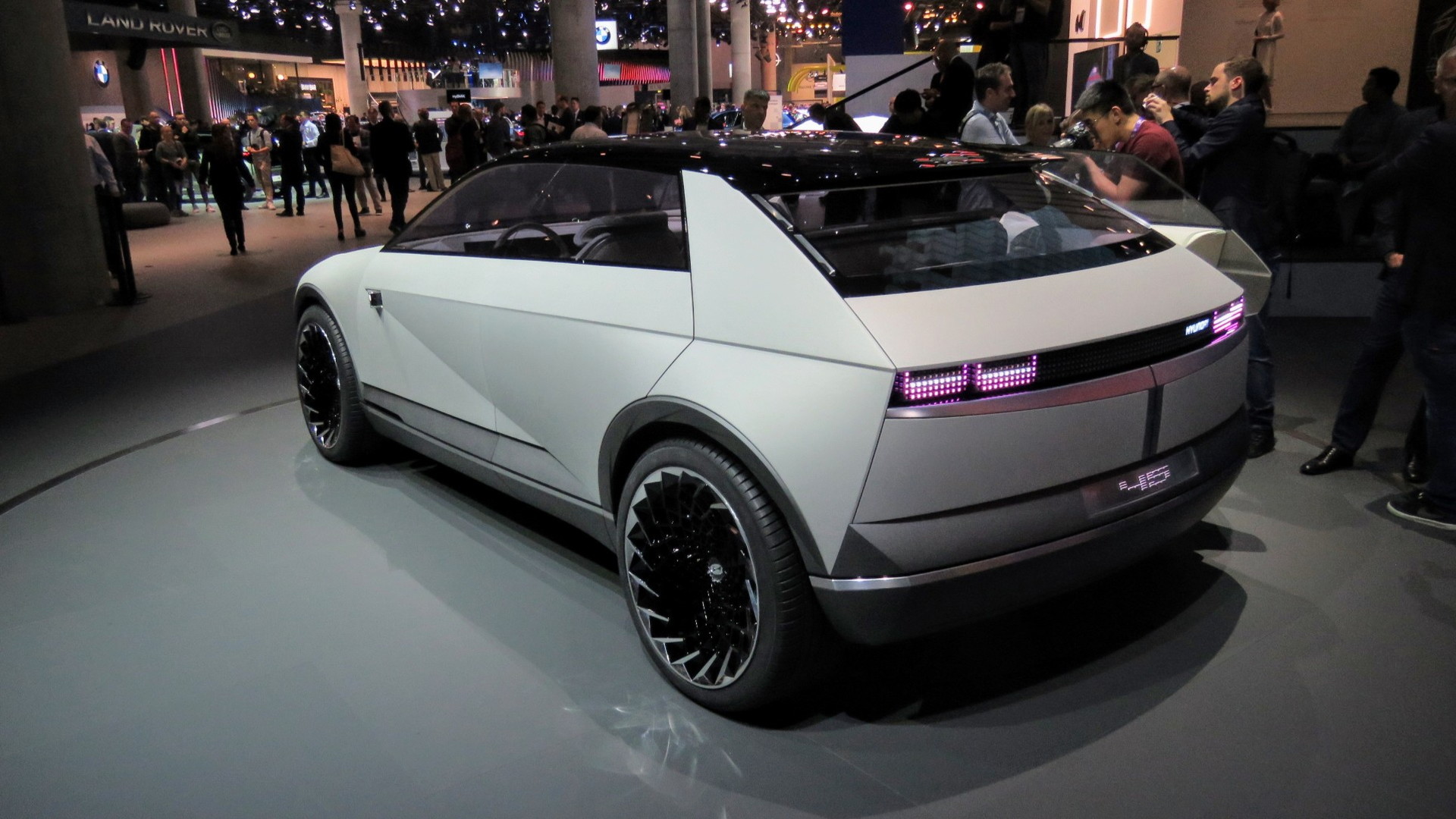 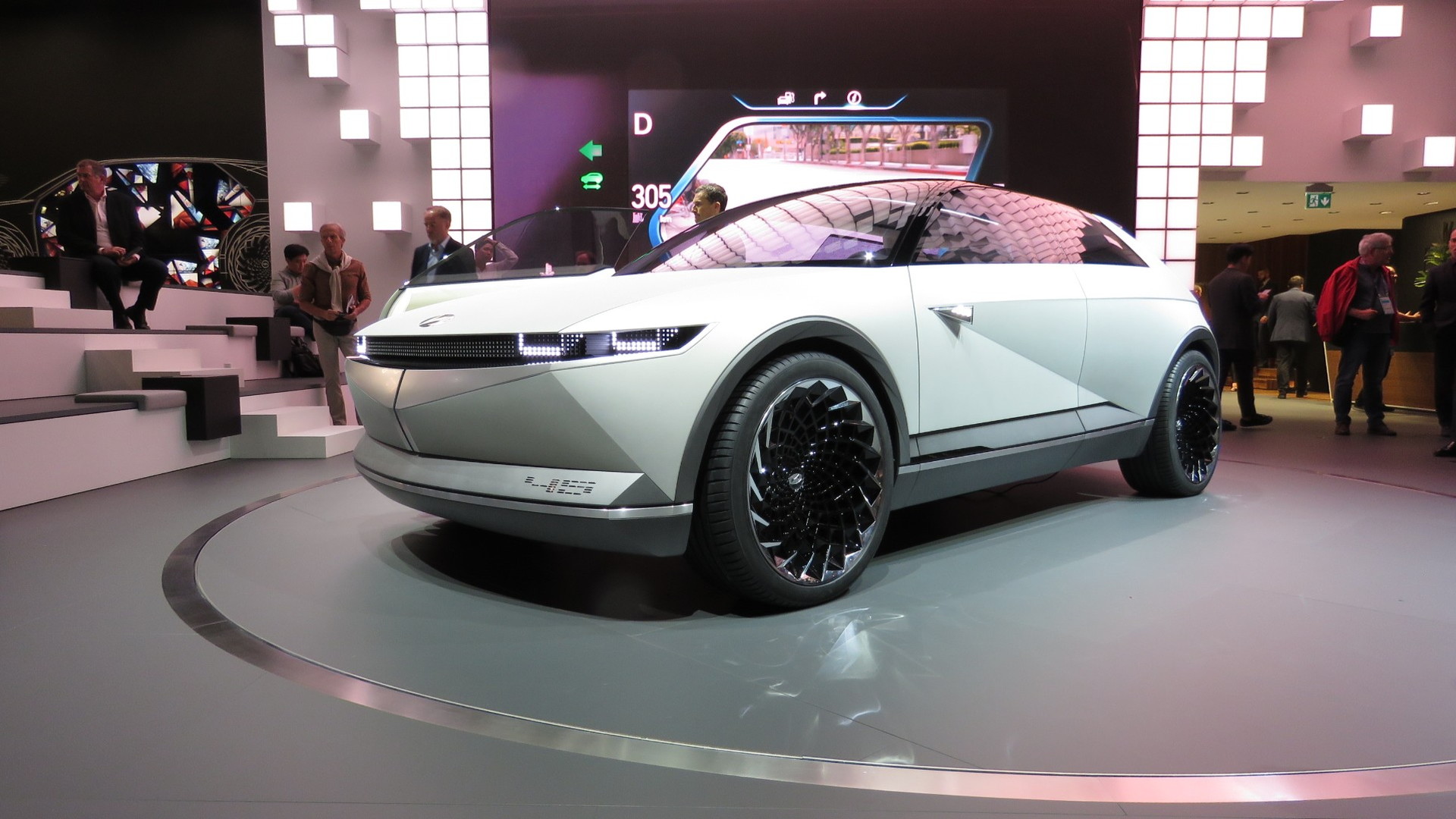 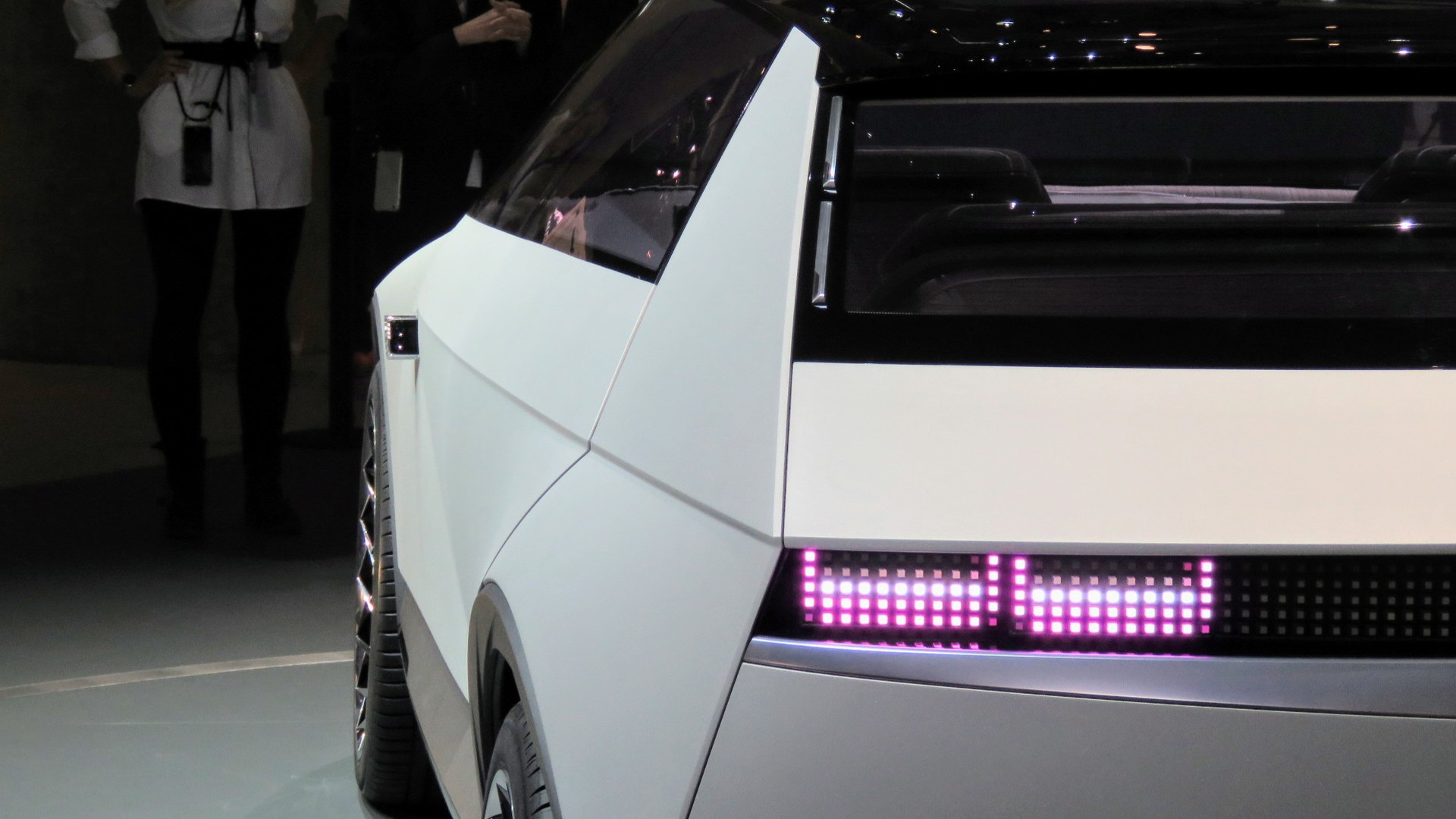 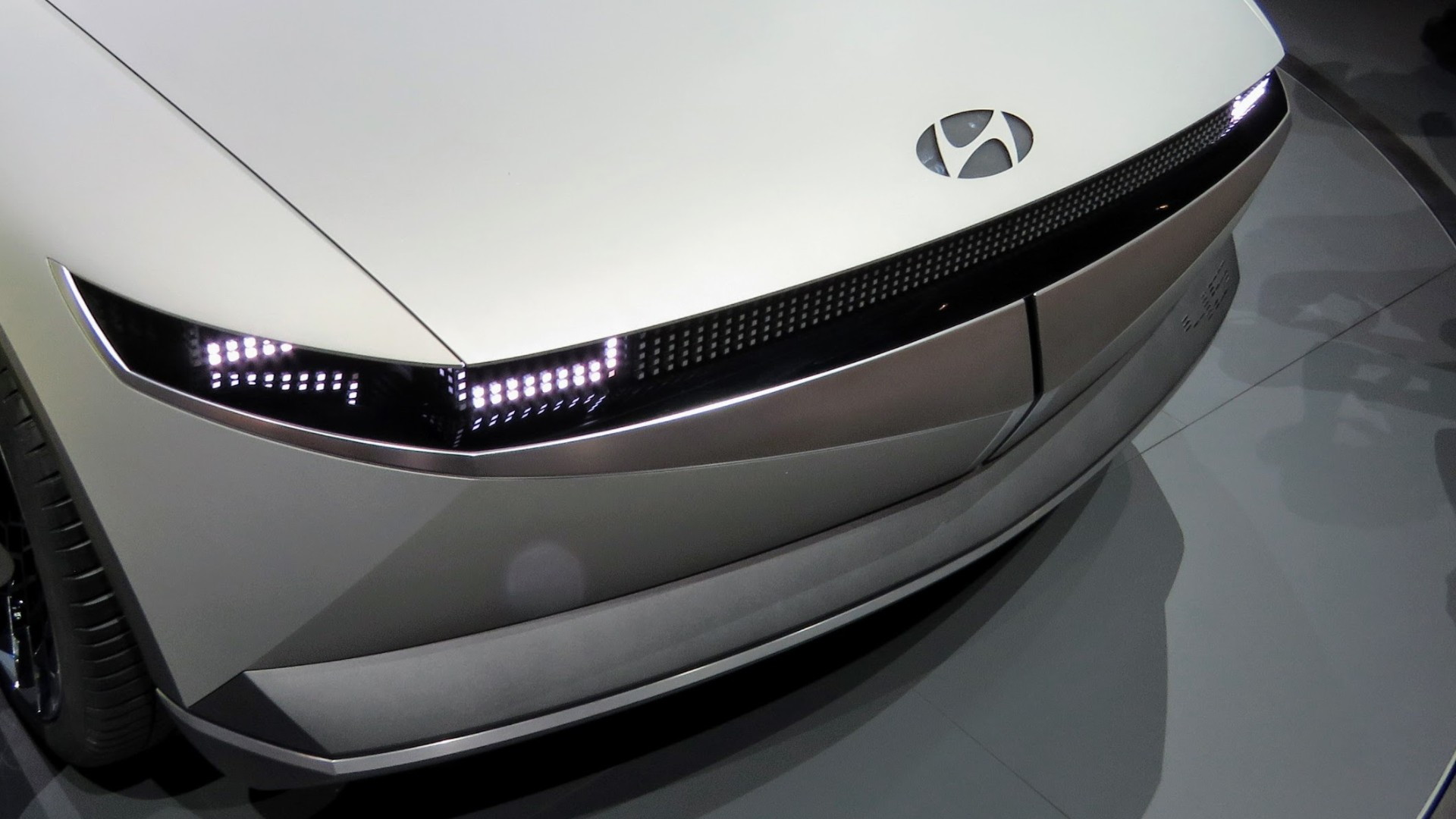 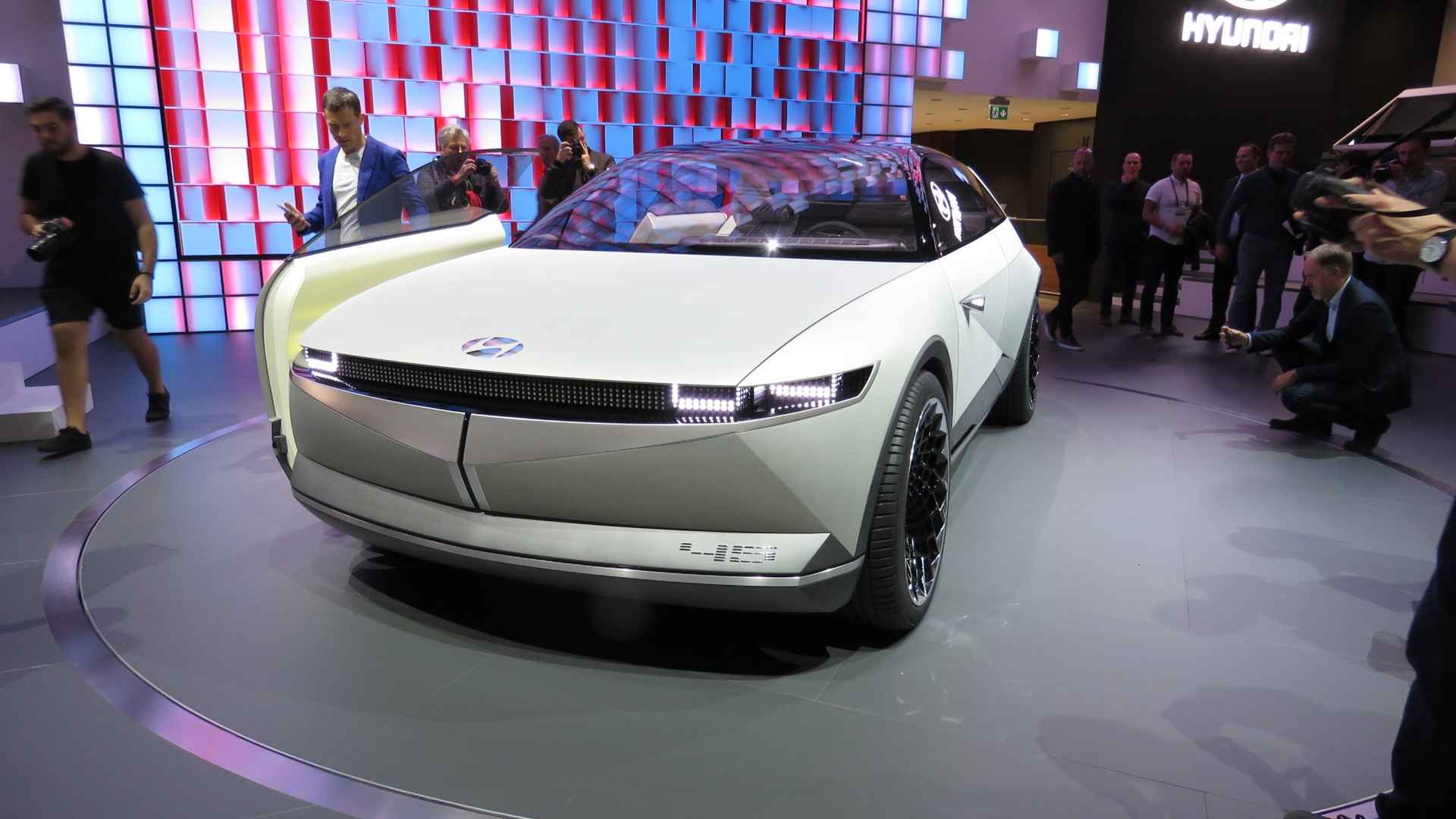 Hyundai is channeling nostalgia for a past product that Americans never had with its 45 concept car revealed Tuesday at the Frankfurt auto show.

But that won’t get in the way of Americans appreciating the design of this strikingly different concept—or seeing it as retro. The concept, according to Hyundai, evokes “emotional connections from the past to create a consumer lifestyle brand for the future of mobility.”

To Americans, it will bring to mind the handsome hatchbacks of the 1970s from AMC, Volkswagen, and others—and the Plymouth Horizon.

The intended reference is the Hyundai Pony, a rear-wheel-drive hatchback that came to be in the mid-1970s—45 years ago—and was later sold in Europe.

The 45 concept mates those distinct hatchback geometries with a front-end look that bears hints of muscle cars and sport coupes from the same era, and brings in some uniquely modern contouring (and sliding doors).

As Hyundai terms it, the overarching language is “Sensuous Sportiness,” with a “kinetic cube” theme for the front and rear lights. A lattice grille also harks back to the ‘70s and ‘80s.

It’s not the only concept to go retro in a quite charming way. The Honda E (originally called the Urban EV Concept) is one of those.

The 45 concept uses side camera mirrors with a built-in cleaning function. And at the bottom of the door, a battery-level strip shows quickly how much range is left in the car, without the need to open up the car or flip through an app.

Inside, the concept “reimagines the in-car experience in the age of electrification and autonomous technologies), with a wide-screen layout that occupies about two-thirds of the dash width, and a curved shelf running the full width. It’s clean and light, with a warm, textured look (from wood, fabric, and leather), and lounge-style seats in front pivot to the side for easier entry and exit.

The 45 concept has a skateboard layout, with the batteries set low in the floor. Hyundai offered no additional technical details about the vehicle, although it’s considering this as a global model, to be built on the company’s upcoming E-GMP dedicated EV platform due around 2021.

In an earlier teaser for the concept, the company called it “a symbolic milestone for Hyundai’s future EV design.” Given this concept’s reception so far at the show—and its refreshingly different design, we’ll likely see more of these lines in the next year or two.