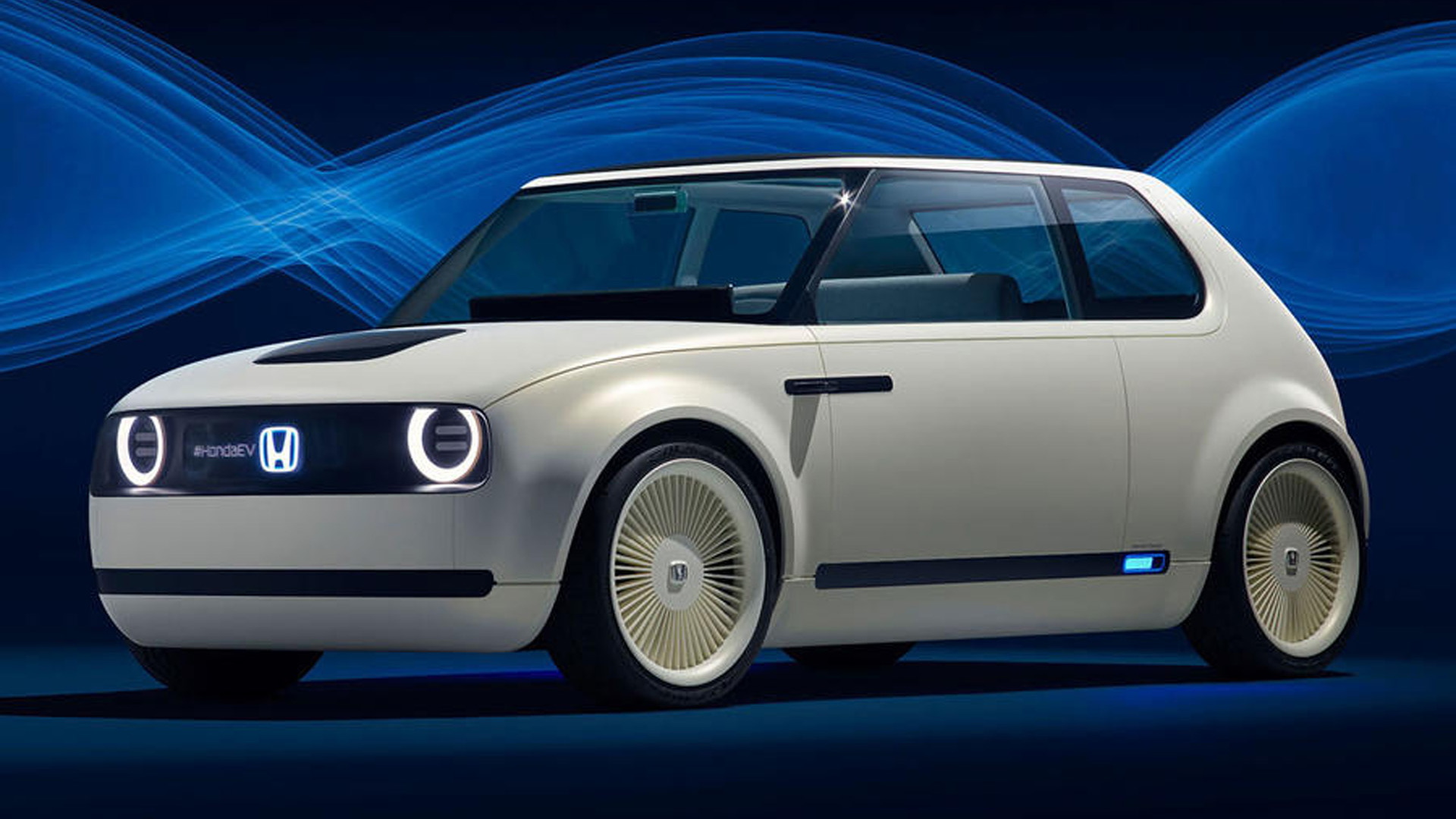 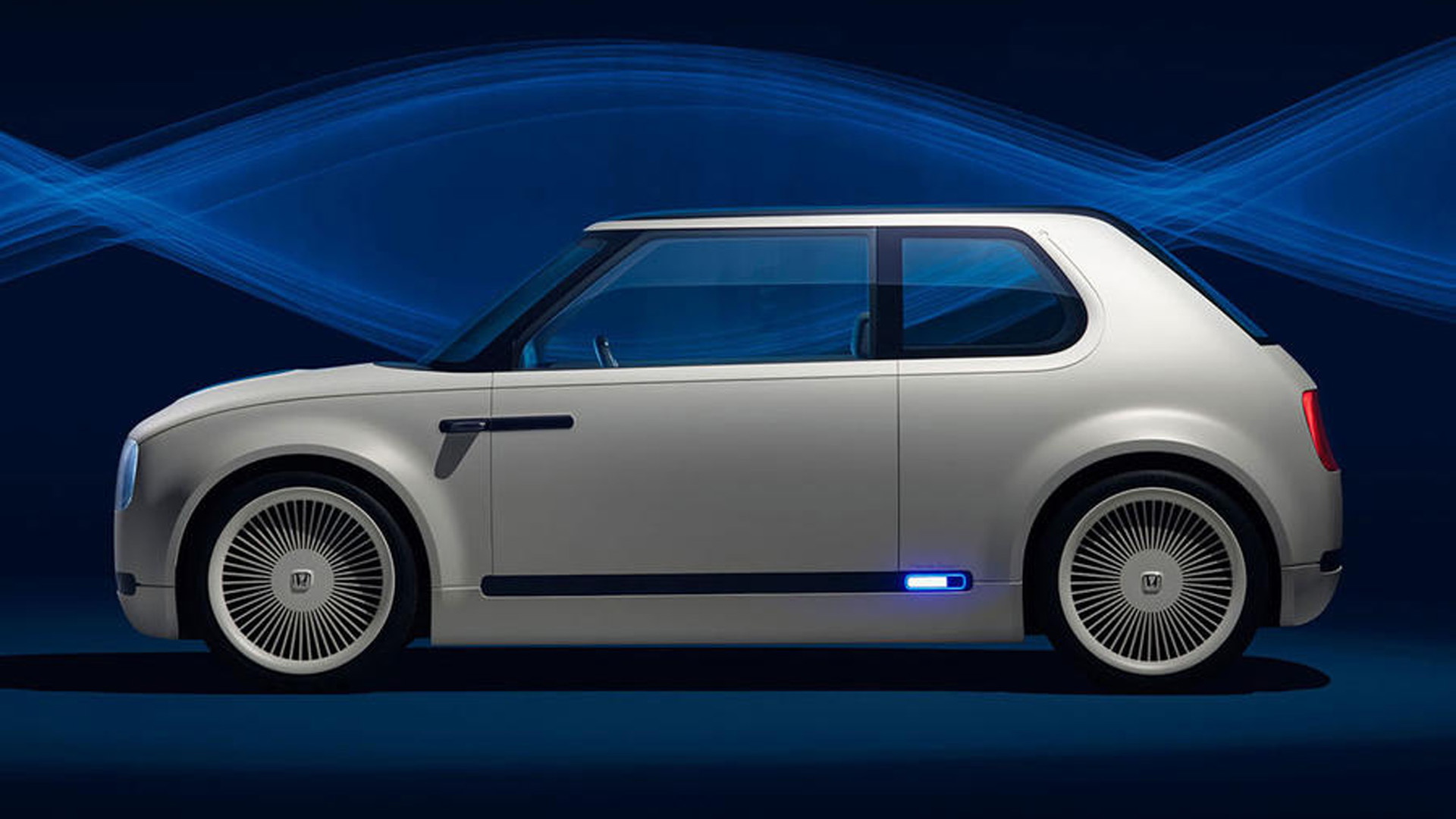 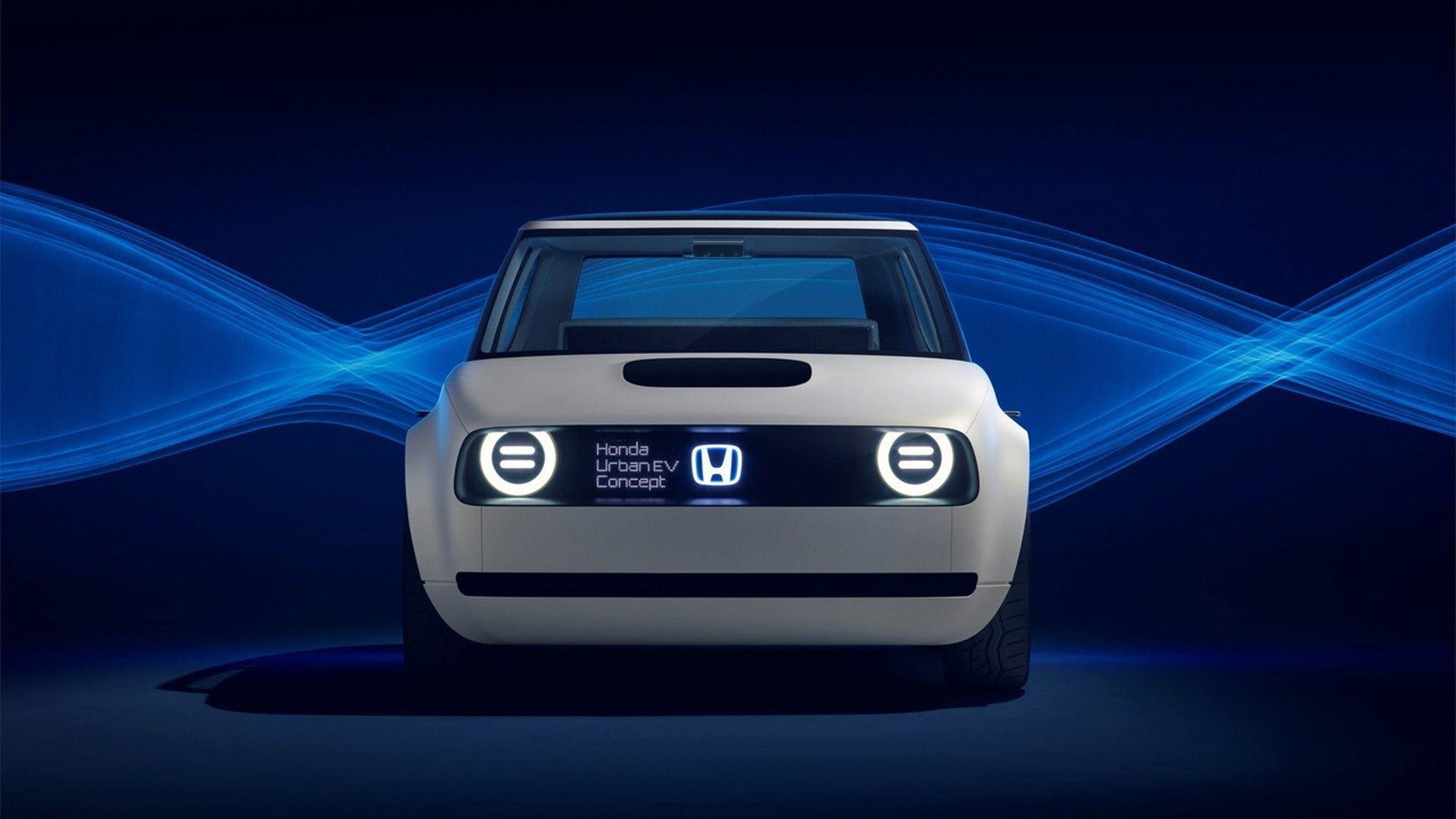 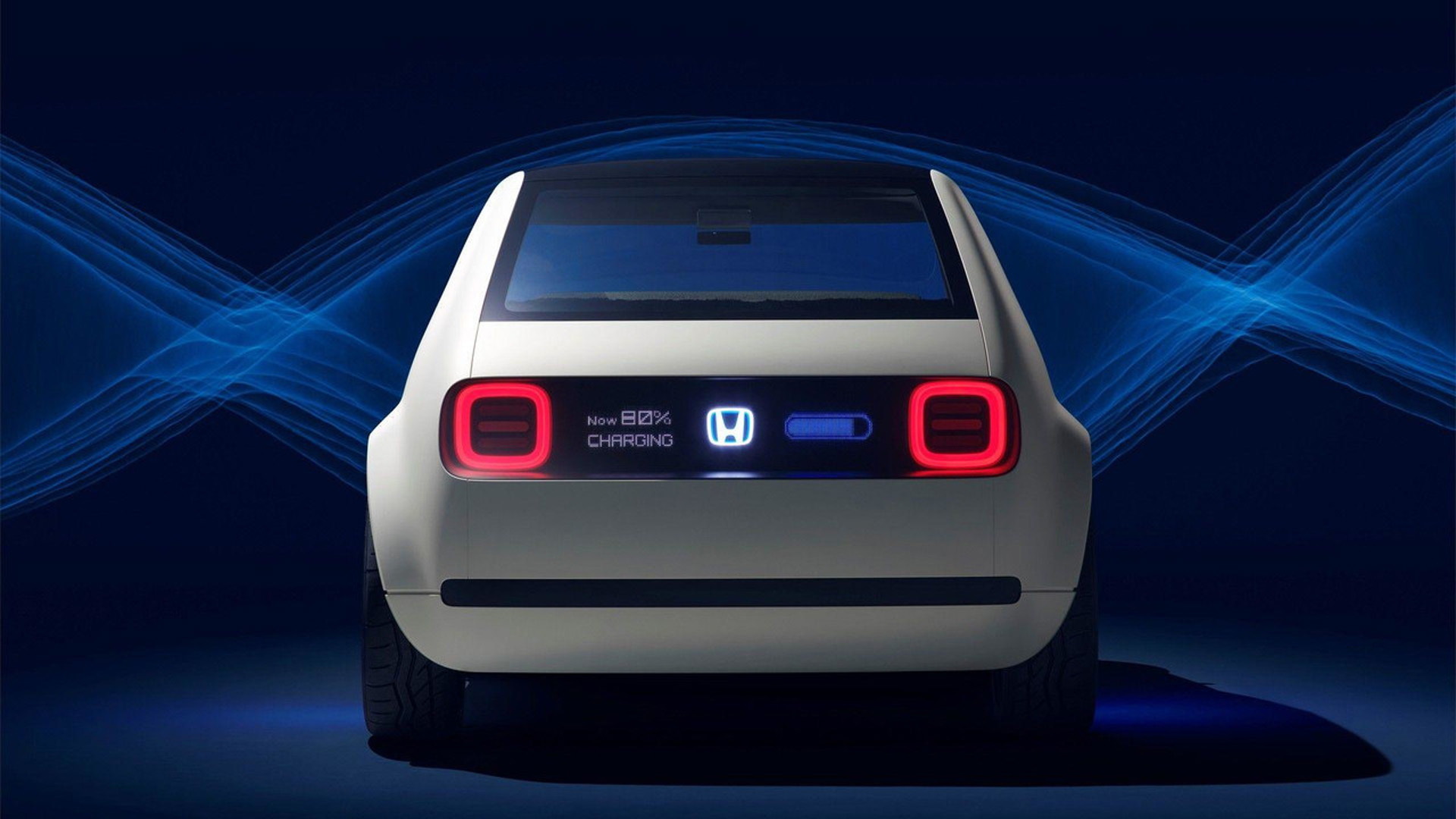 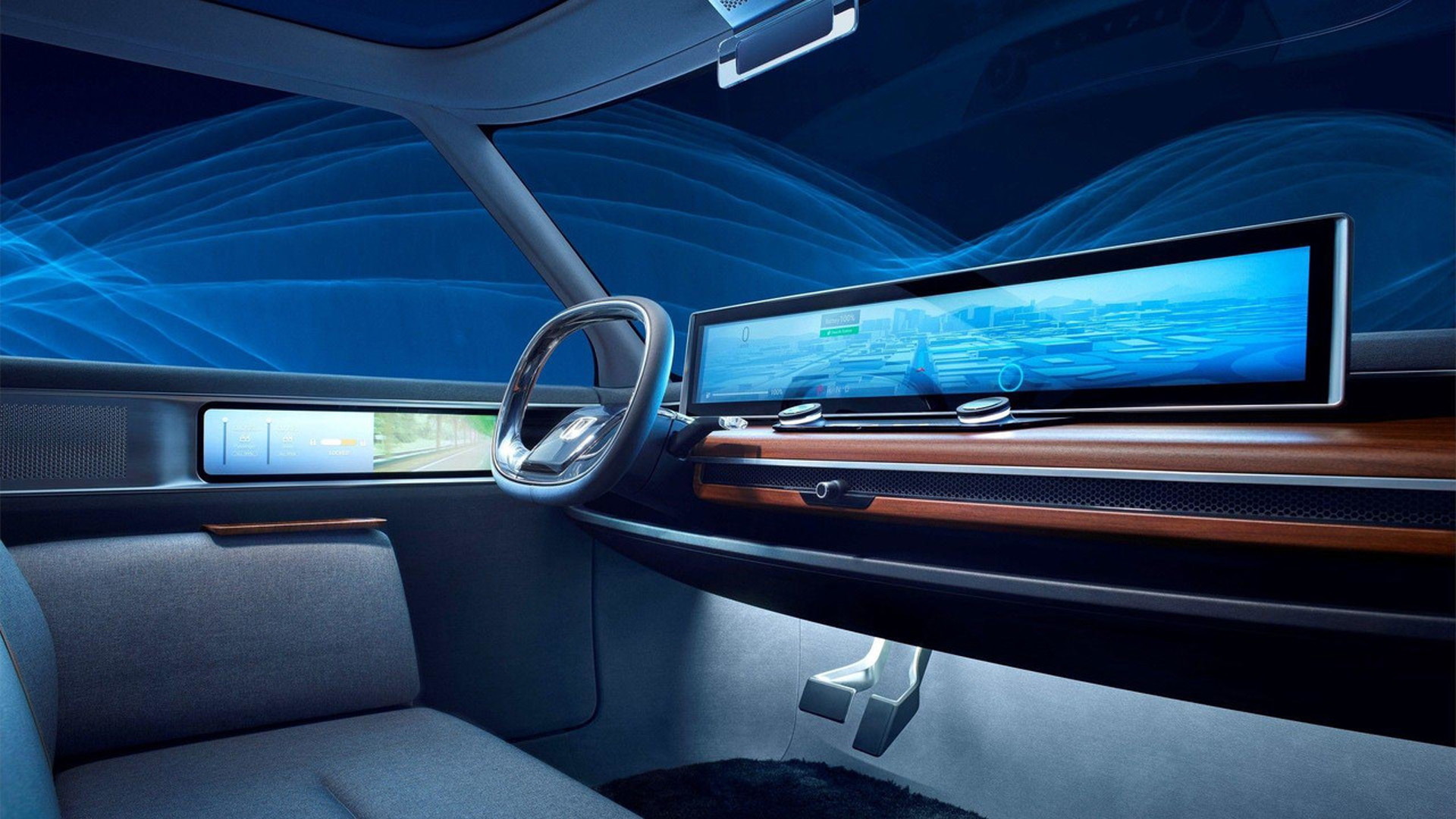 If there were a favorite car among journalists and car fans at this week's Frankfurt motor show, it may have been a small, all-electric hatchback city car.

Which is pretty remarkable, given the practical, unexciting, utilitarian, slightly nerdy image every non-Tesla electric car seems to carry among that group even today.

The car in question is the Honda Urban EV Concept, a reincarnated version of the Japanese maker's beloved old City hatchback, with an up-to-date electric powertrain.

Like Toyota, Honda continues to suggest that battery-electric vehicles are largely suited only to short-distance, low-speed urban use.

But Japan also has a long history of retro-design small cars, and the Urban EV Concept plays directly into that.

Honda fans will immediately recognize the compact dimensions, round headlights, rectangular grille, and even the hood decal as directly evocative of the City.

You get more retro from the upright tail with square taillights, which even reminded some older observers of first-generation Honda Civics of the 1970s.

But like all good retro designs, the Urban EV is packed with clever modern touches. (You wouldn't really want the slow acceleration, minimal crash safety, or Spartan interior of a 1976 Honda Civic these days, trust us.)

READ THIS: Assessing the Honda Clarity range: how electric cars fit in, and why

The huge spoked alloy wheels are several inches larger in diameter than the 12- or 13-inch wheels on this car's ancestor. They'll likely get smaller in production.

We're not entirely sure where the rear-hinged "suicide doors" came from, but they're interesting and surprisingly practical. Bench seats also aren't exactly a nod to the original, but they say "old car" in more general terms.

Front-seat occupants will stare at a dashboard screen that's almost as wide as the cabin. Even Mercedes-Benz hasn't gone that far.

It will likely display both the usual operating and navigation information, along with more EV-specific data like battery state of charge, charging information, and likely nearby public charging stations.

We don't know anything about the powertrain beyond the fact that it's battery-electric.

Honda hasn't provided a battery capacity, motor power or torque figures, range estimates, or even which set of wheels are driven.

CHECK OUT: Honda CR-V Hybrid appears in Frankfurt; US likely next, but when?

Charging status, Honda said, is displayed on the panel between the taillights, and a charge icon lights up just above the side sills ahead of the rear wheel.

Underscoring that blue is the new green, the Honda grille badge is backlit with a blue light.

Owners can also program the car to show messages on the display between the LED headlights. We're scratching our heads over that one.

Honda spent time in its presentation discussing what it calls its Power Manager, which apparently allows easy transfer of energy among the car's battery, the home's electric consumption, and the broader electric grid.

The system lets homeowners store renewable energy when possible, and use it both to recharge the car and feed it back to the grid via "reverse-metering" when not needed for the home or car.

That clearly requires the Honda Urban EV Concept to include a built-in power-out capability. That feature is now essentially a standard feature on all Japanese electric and fuel-cell vehicles, but is not fitted to North American versions of the same cars.

Honda's president and CEO, Takahiro Hachigo, the company will launch a production version of this car for European markets in 2019.

Unfortunately, Sage Marie of American Motor Company threw cold water on the hopes and dream of U.S. small-car and EV fans, saying it was not designed for North American markets and would not be a part of the company's product portfolio here.

For all the latest concepts, production cars, and other updates from the IAA show, see our Frankfurt auto show news page.