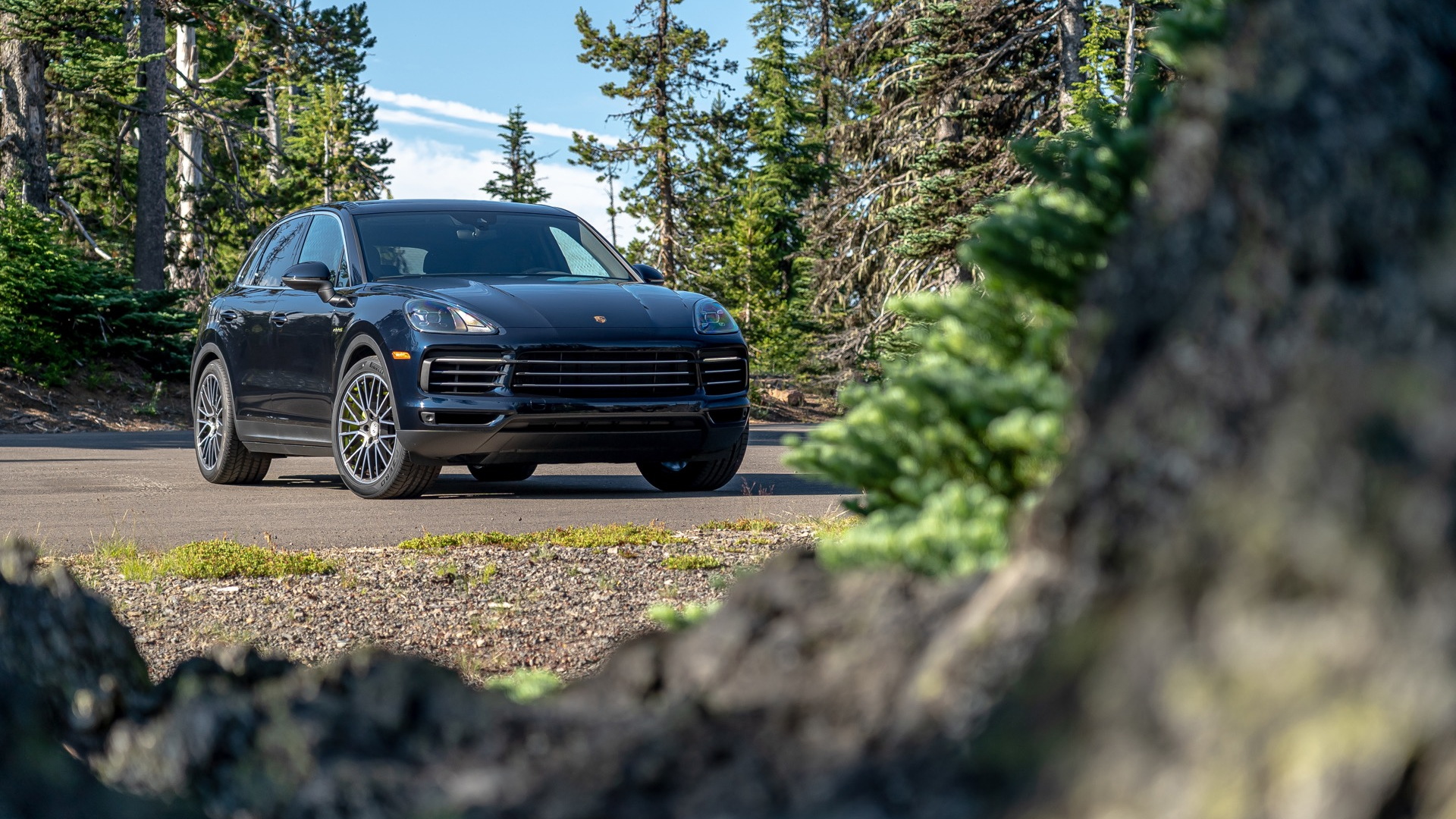 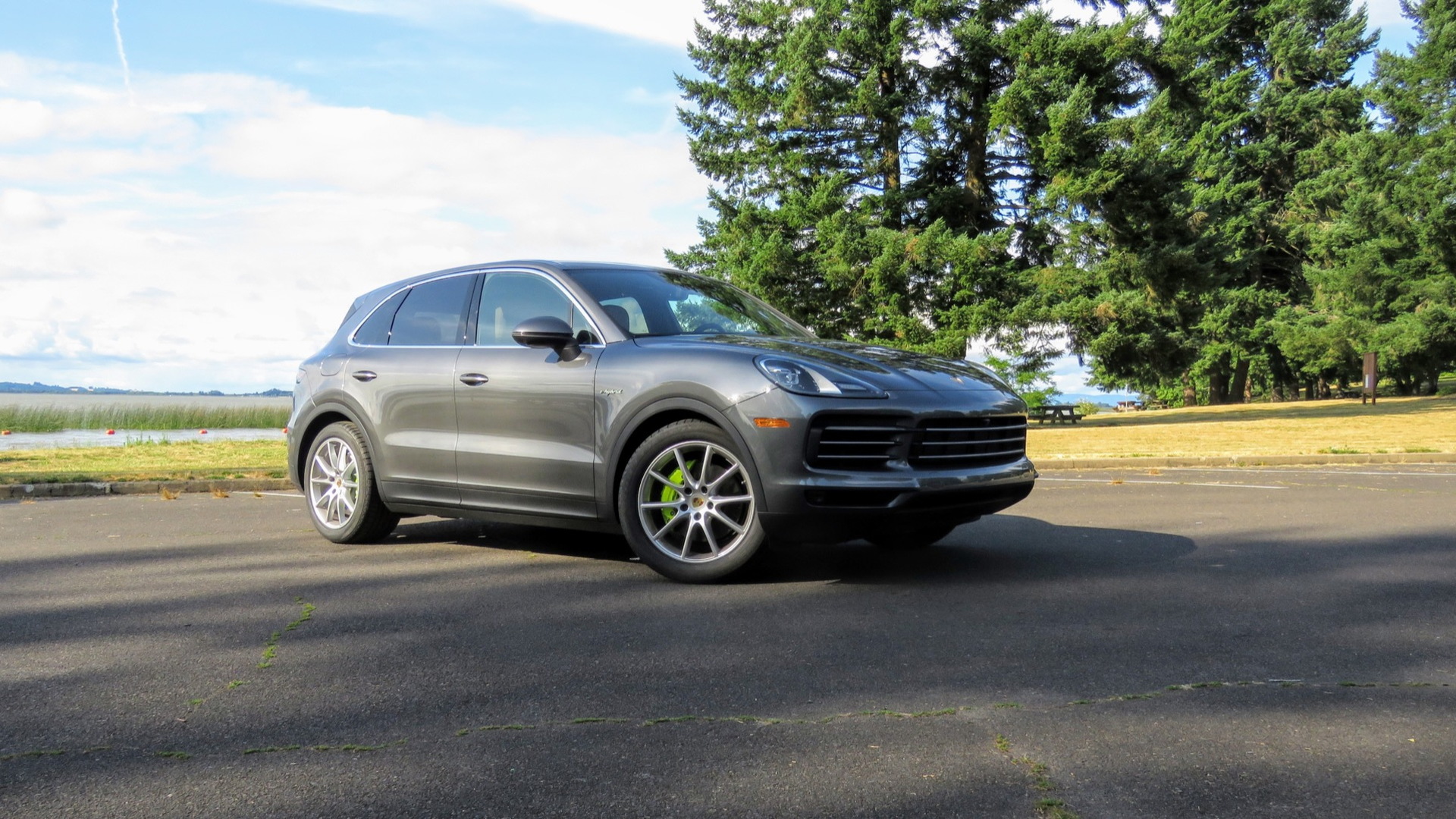 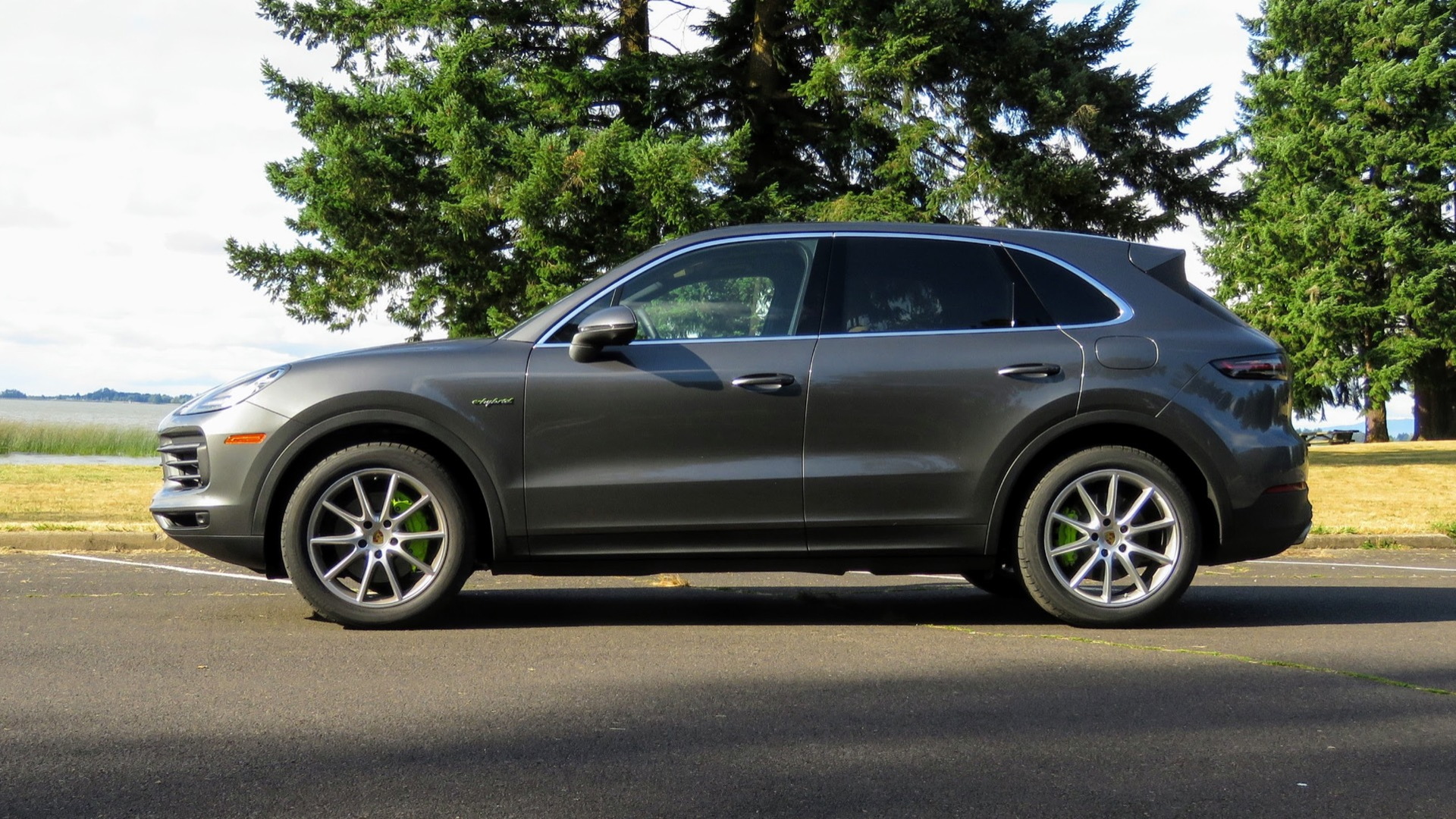 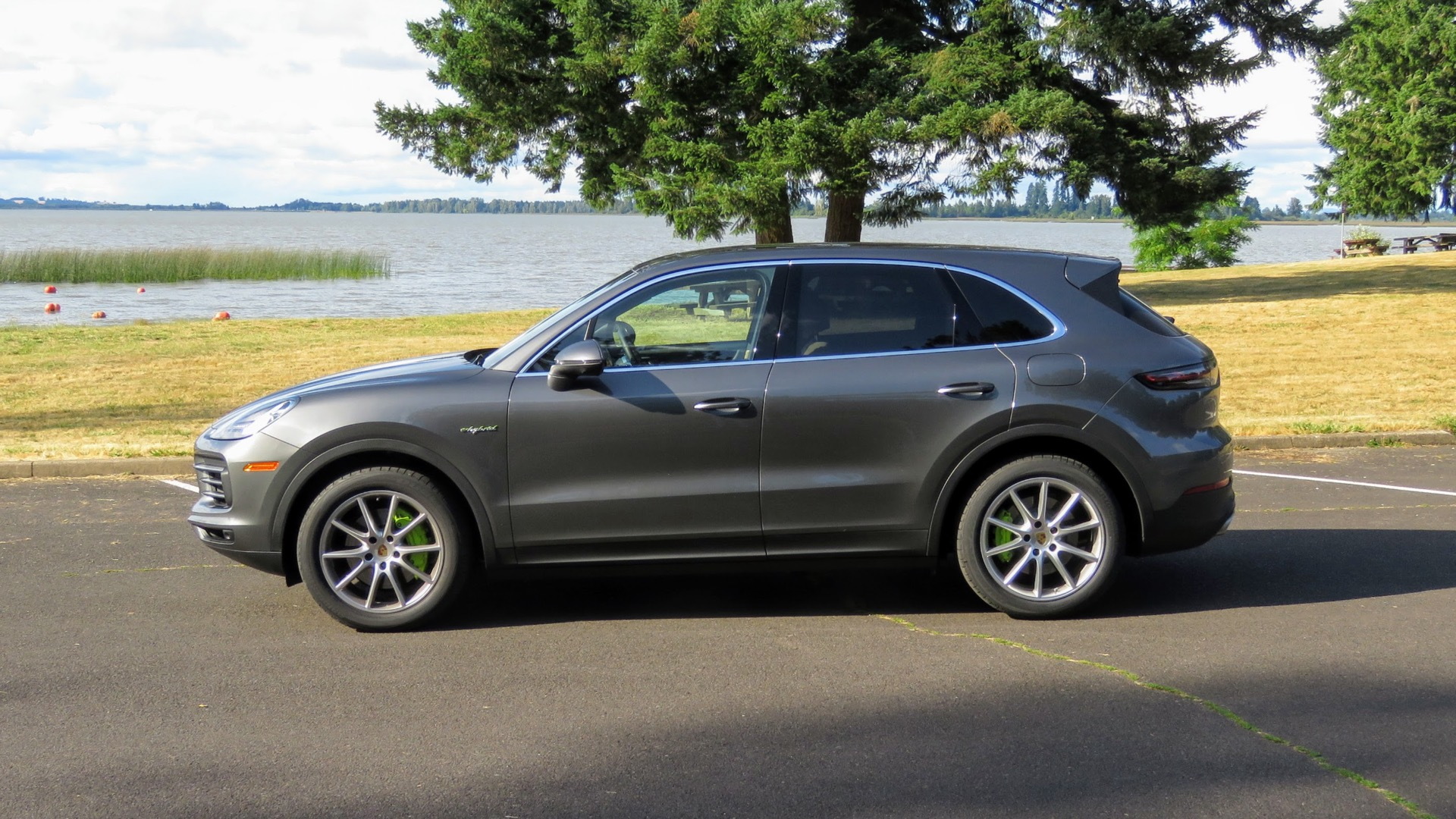 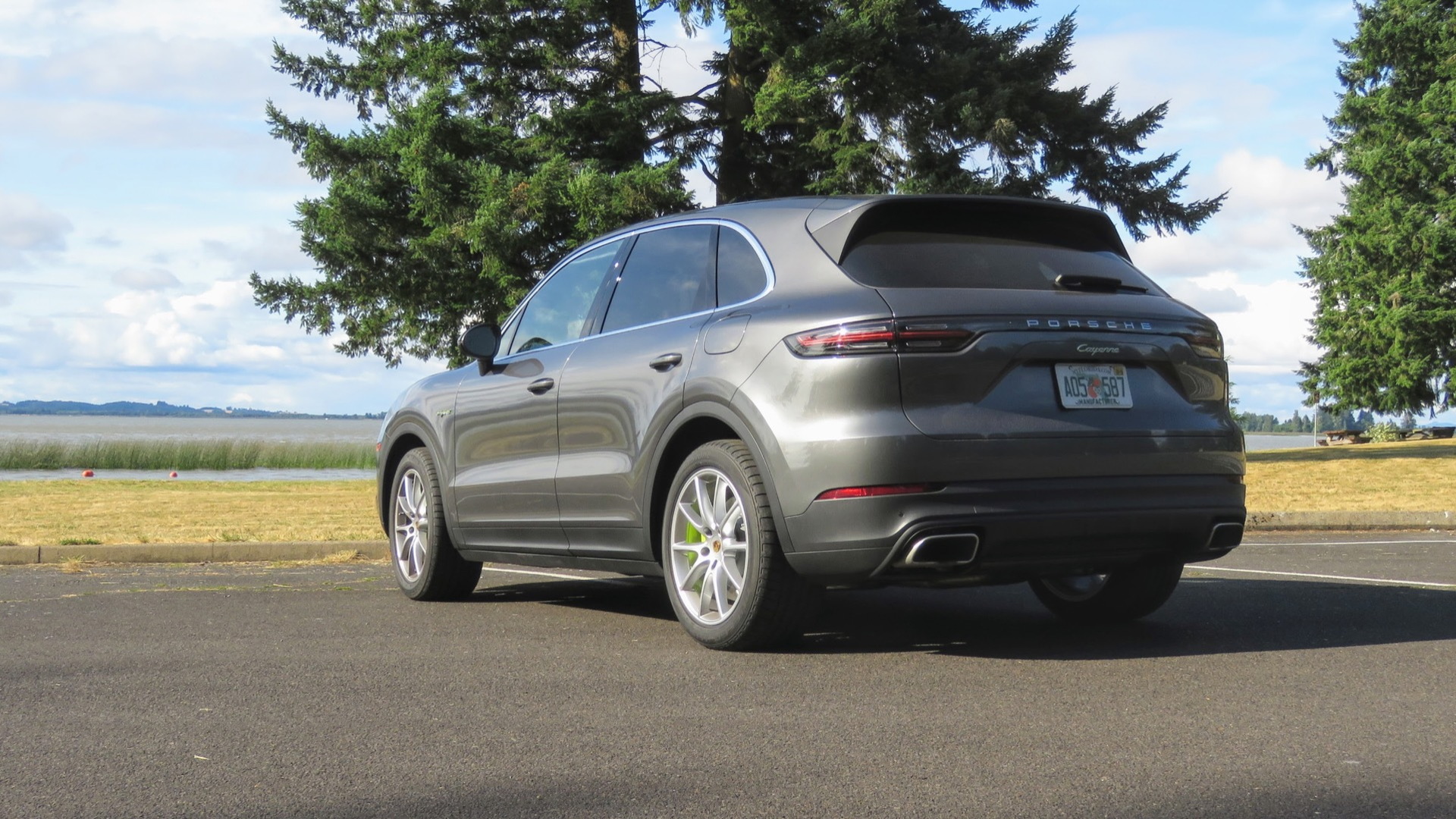 You don’t have to look long to see the counterculture influences that persist around Eugene, Oregon.

Last week, mostly avoiding tailpipe emissions and driving the 2019 Porsche Cayenne E-Hybrid on plug-in charge, we quietly cruised past the eco-villages, community gardens, and co-ops that are a permanent fixture there, to the tie-dyes and jaw-dropping parade of pristine Microbuses and Vanagon Westfalias departing the annual Oregon Country Fair in neighboring Veneta. And the thought occurred to me that if only more bystanders knew what our bright-green brake calipers meant we might be given an even warmer reception.

The backdrop proved perfect and the E-Hybrid as positively mainstream—or as mainstream as a $93,080-as-tested German luxury SUV can appear in a big university town.

That’s Porsche’s intent as it ramps up to an electrified future, arriving at full speed with the Taycan electric car late this year. Porsche’s hybrids, like the Cayenne hybrid, are in from the fringes. The hybrids are now cheerleaders for what electric motors and battery packs can do and aim to convert those who aren’t yet ready to give up on gas stations; and they’re “value-added” vehicles that perform better than equivalent non-hybrids.

The first time Porsche produced a Cayenne Hybrid was in 2011 and it was met with nearly as much of an uproar as when the brand first introduced the SUV. Now with the brand’s course set to electric, and with this latest Cayenne E-Hybrid we previewed in spring 2018 finally soon arriving, the question may now be, “Is this enough?”

What the previous hybrid did, with better numbers

Incrementally, the E-Hybrid checks all the boxes. Versus the model it replaces, it goes farther on electricity alone, has significantly more electric and system power, and accelerates quicker. Appropriately, the nomenclature for this latest hybrid is “Cayenne,” rather than “Cayenne S,” and the E-Hybrid’s official 0-60 mph time of 4.7 seconds blasts past the standard Cayenne’s best 5.6-second time and now matches the Cayenne S and its 4.7-second time (with the optional Sport Chrono Package and Sport+ mode, included in all E-Hybrids).

As with the previous generation of the E-Hybrid, there’s a modest amount of all-electric plug-in range. The 2019 E-Hybrid gets a much larger battery pack—14.1 kwh, versus 10.8 kwh—that could travel nearly 20 miles (official figures haven’t yet been released), versus the official 14 miles for the 2018 Cayenne S E-Hybrid. In our Eugene drive, starting with a full charge, we saw 19.9 miles of relaxed driving in city and suburban streets and highways up to about 65 mph.

And relaxed is really how you need to drive if you want to keep the 335-horsepower gasoline V-6 from kicking on. With E-Power mode engaged, the Cayenne E-Hybrid gives you a distinct additional accelerator detent maybe a third of the way into the pedal’s travel. Around town, that was plenty to take off energetically from stoplights and feel perky, but above 45 or 50 mph it limits you to more conservative, right-lane driving if you want to stay all-electric up to the system’s potential 83 mph sans tailpipe emissions.

E-Hybrid also has an E-Launch mode that basically has you hold the brake while the accelerator is at the detent. It’s a gimmick, but it may be another way to get drivers interested in the electric side.

Once you’ve used all of your charge, the E-Hybrid bumps you over to Hybrid Auto mode, which gives the engine plenty of downtime when coasting or decelerating and teases out some all-electric operation for low-speed accelerating or cruising. It works within a narrow band of the battery’s capacity—and if you start your drive from Hybrid Auto, you can opt to either E-Hold (save your charge for later) or E-Charge (task the motor as a generator whenever it’s not needed for total system power).

Performance side is all about the boost

The other two positions in the steering-wheel mounted rotary mode selector, are Sport and Sport+, which provide heightened responses for the steering, suspension, accelerator, and transmission. They run the engine all the time, and for a sustained boost from the powertrain for high-performance driving, both Sport and Sport+ won’t let you drop below a 30-percent charge of the plug-in battery, and if you’ve already used up that capacity they’ll E-Charge up to 30 percent.

Any of the charge-restoring functionality in the system works very quickly. In about 5 minutes you get 10 percent of battery capacity restored.

In the center of the mode selector is a Sport Response Button that sharpens the calibration of all those things even more, just for 20 seconds at a time, with the goal of providing a way to quickly jump to the boldest settings only when absolutely needed—a sudden pass, for instance.

As we left the lefties of Eugene behind and the roads turned faster and twistier, and the internal combustion engine was more prominent and the Cayenne E-Hybrid felt proportionately more inspiring.

The configuration of the motor and 8-speed automatic transmission remain the same, with the ability to completely declutch the engine at times. However the “electric machine,” as the company’s engineers tend to term it, now makes up to 134 horsepower (100 kw) and 295 pound-feet of torque—a huge boost on both counts—and brings the total system up to 455 hp and 516 lb-ft.

The current Cayenne doesn’t ride as stiffly as the previous generations and permits more body roll than previous Cayennes. That, perhaps counterintuitively, means you can drive it quicker and more confidently. As such, the Cayenne’s heft doesn’t surprise you in tight corners the way it would in the previous version. It weighs 300 pounds less than last year’s Cayenne S E-Hybrid and more than 600 pounds less versus the first-generation Cayenne S Hybrid.

That said, we have some gripes about the driving experience. The sound of the V-6 just isn’t that inspiring—especially given the extra wallop of the motor system. An optional sport exhaust system (not represented at our drive event) should enable a more fitting note, reserved for Sport+ mode.

The other issue we saw was that Porsche doesn’t do enough to make regenerative braking part of the driving experience. It’s opted to use the paddle-shifters for transmission shifts, leaving the regenerative braking variation purely to an extension of the brake pedal. Christian Trautmann, the Porsche AG vehicle line manager for SUVs, including the Cayenne E-Hybrid, said that it’s less confusing for owners and that drivers will be trained to feel the difference between regen and the friction pads. We think that if E-Hybrids are the transition to its electric cars, Porsche is missing out on a key part of the driver engagement in electrification.

On our test car, we noticed a pronounced difference in the way that regenerative braking handed off to the friction brakes when we had a nearly full charge, versus when we had very little charge remaining. Moving that to paddles or a toggle would have helped things feel more consistent from the driver’s seat.

On the other hand, we applaud how Porsche has tuned the baked-in response of the regenerative braking and e-boost itself to be different between Sport and Sport+. In Sport+ the system tends to deliver the maximum boost performance and recover the maximum regen, “like a switch on and off” as Trautmann described it.  Sport mode ordered up a strong but more progressive application of regen and boost.

While drives like ours aren’t very telling on fuel efficiency, we have a worst-case scenario for touring when we drove like, well, Porsche drivers. After 309 miles of sporty driving, mostly on two-lane mountain roads and in a mix of modes, the trip computer in one of our Cayenne E-Hybrid test cars showed 21.8 mpg.

Lots of options—including one must-have

Those building any Cayenne—or any Porsche, for that matter—face a daunting array of a la carte options, but if you have any enthusiasm for plugging in (and if not, why are you reading this?), we see the $840 7.2-kw onboard charge as a must-have. It recharges on a Level 2 charger in less than 2.5 hours—shopping-trip territory. Despite the VW brand’s former plans to fit its plug-in hybrids with CCS fast-charging capability, that’s still not in the plans for Porsche.

The 2019 E-Hybrid starts at $81,150 and is eligible for up to a $6,712 federal tax credit. Porsche Cars North America has confirmed that first deliveries of the E-Hybrid kick off soon, with the run for 2019 mostly limited to vehicles that have already been ordered as well as dealer demos. The 2020 models will continue to fill out dealer stock, with no major anticipated equipment changes—as the E-Hybrid serves as a very mainstream backdrop for the Taycan counterculture.