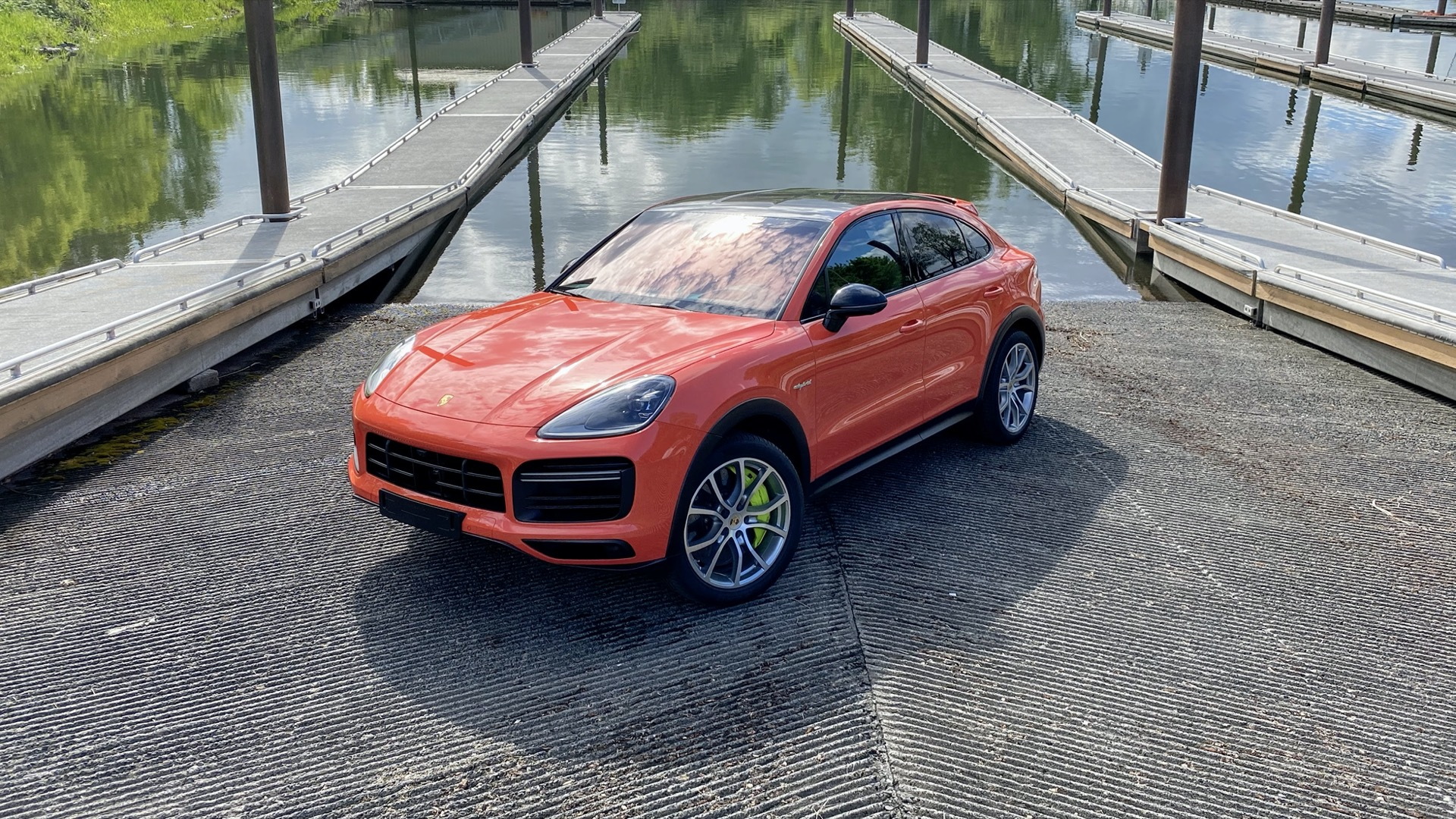 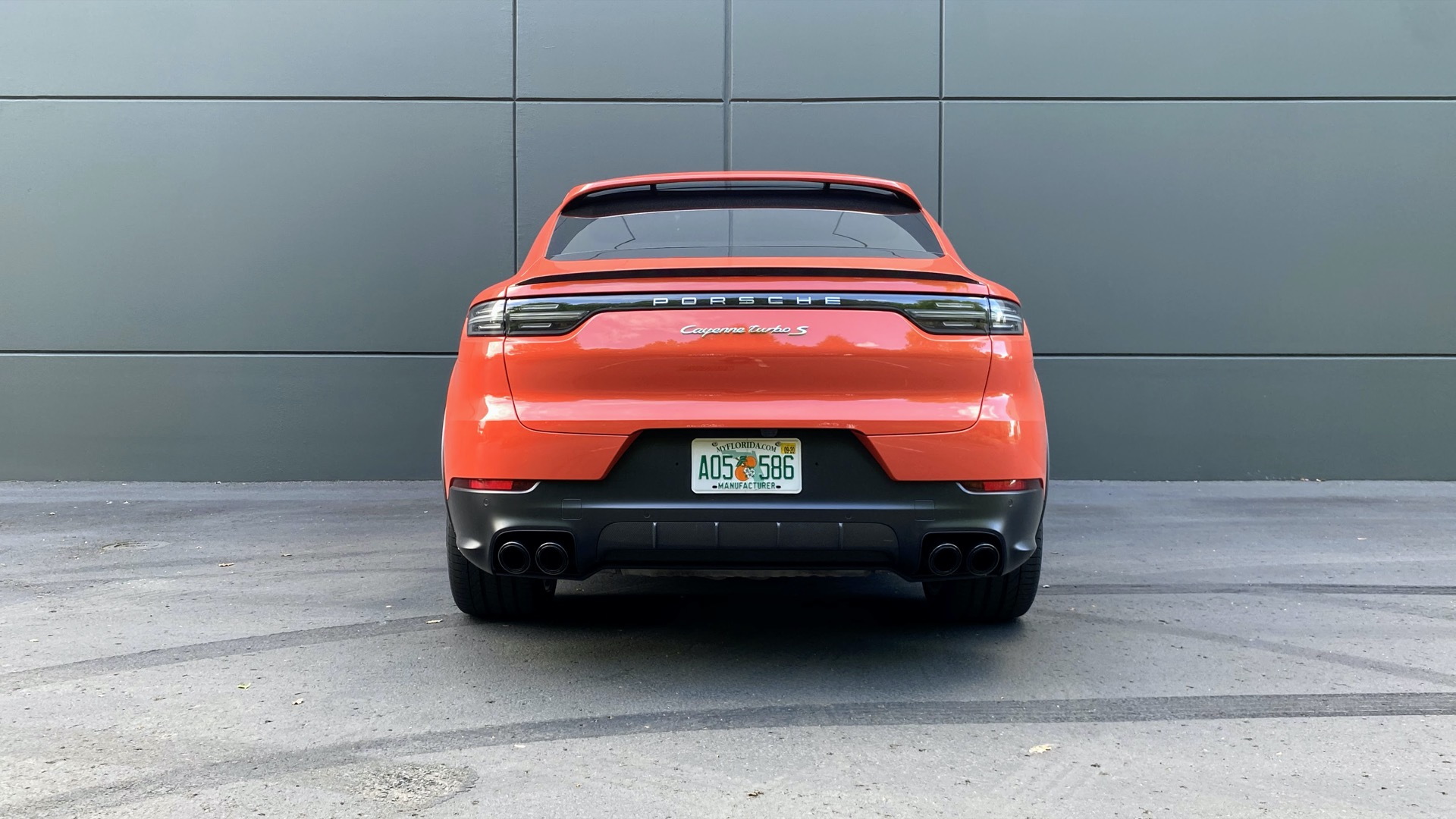 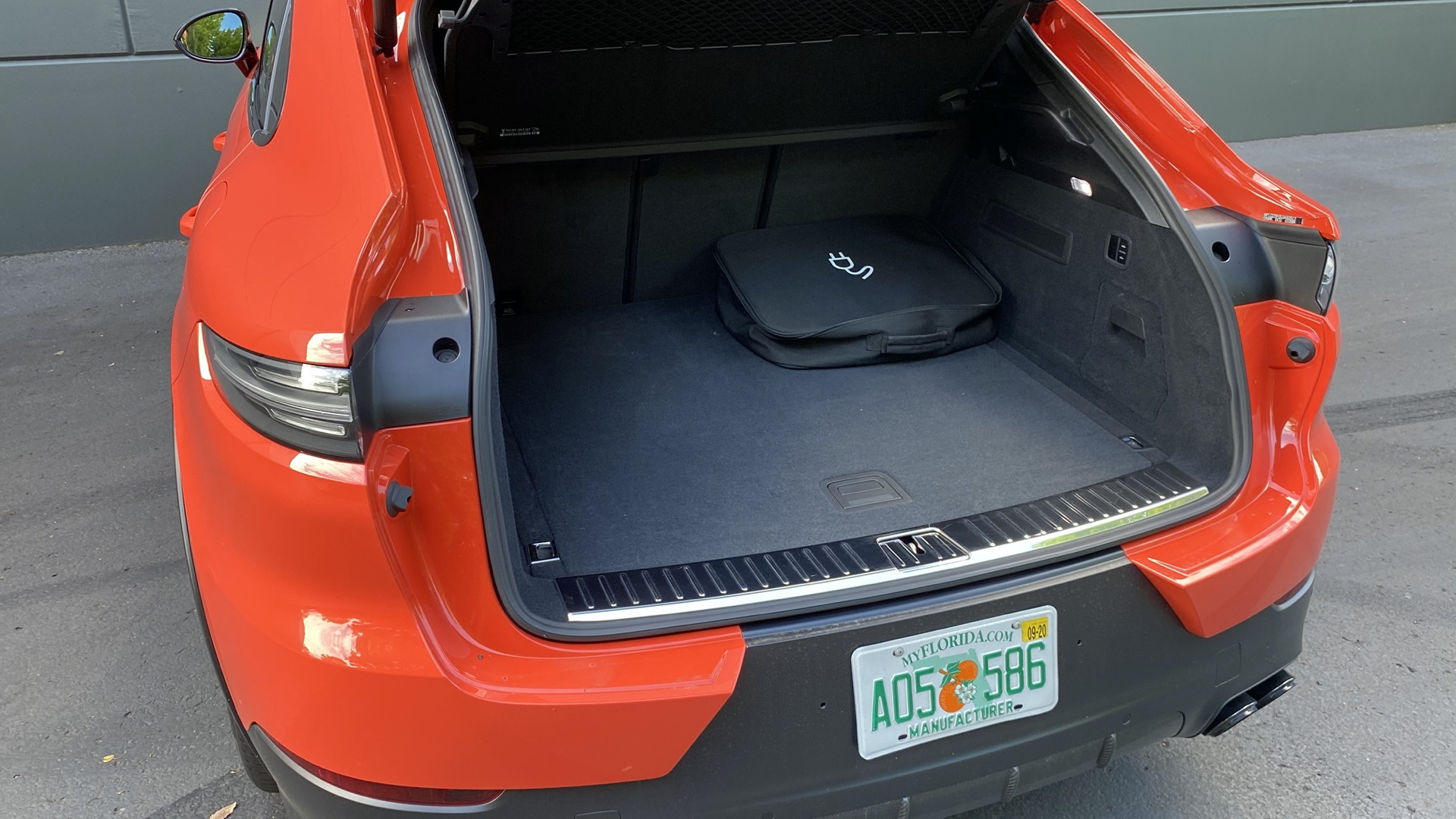 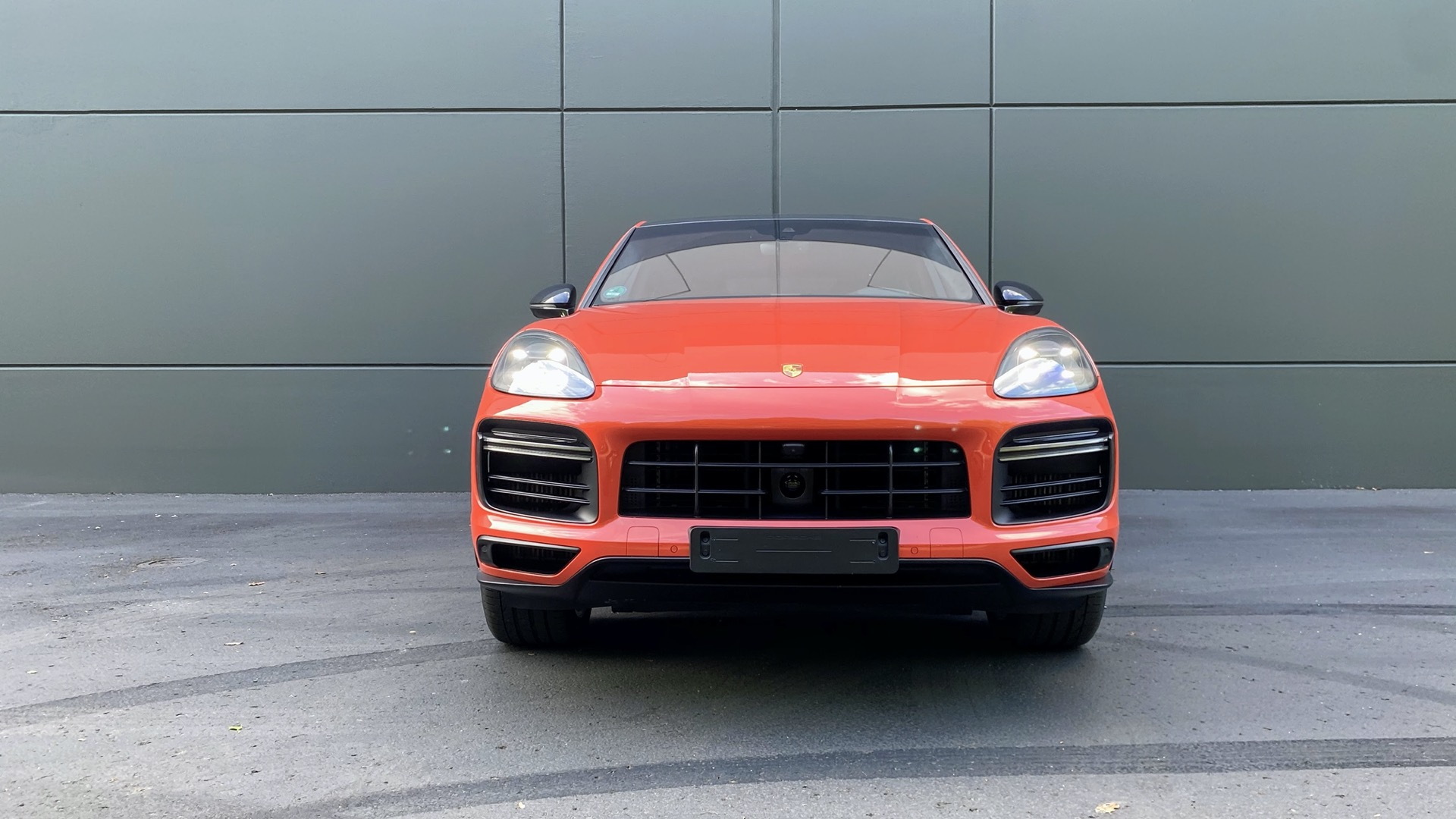 You’ve got to be kidding.

That was my reaction when I first heard that the fastest Porsche SUV ever was also a plug-in hybrid with what Porsche claimed to be meaningful all-electric range.

To skeptics, this 670-horsepower machine with a 0-60 mph time of 3.6 seconds and a top speed of 183 mph might read as a grudge-match move—a workaround way to provide blistering high-speed performance on the few unrestricted sections of the Autobahn while appeasing regulators with zero-emission motoring in European city centers that are increasingly sensitive to the idea of tailpipe emissions.

It might be that, but it’s also many other things. Porsche is serious about electrifying its entire lineup—and so in addition to the Taycan electric car and a fully electric Macan in the works, it’s offering up plug-in hybrid versions as a performance boost, harking back to its 918 hybrid supercar of the last decade. 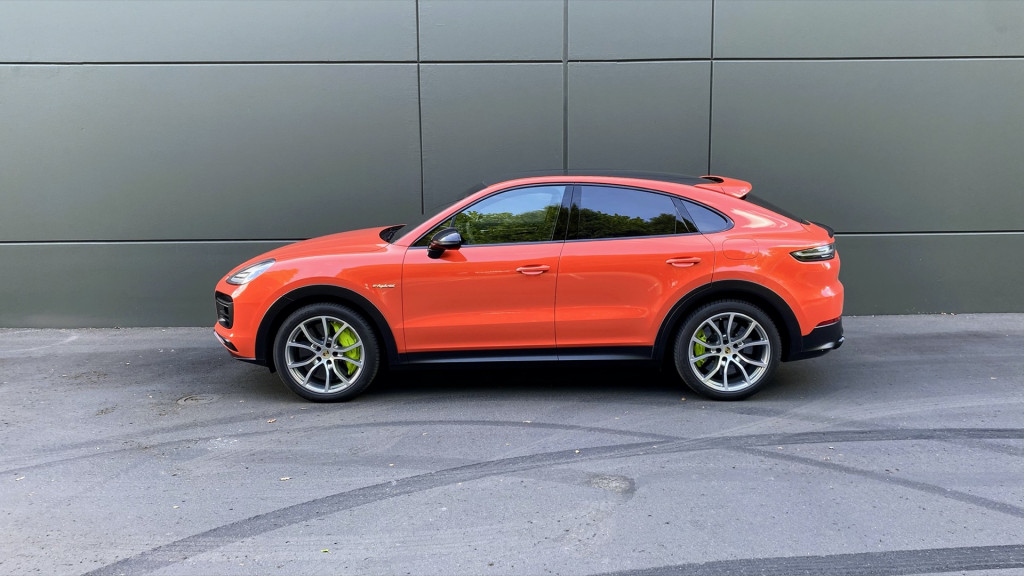 With so much attention to electric, this flagship of Porsche SUVs starting at $165,750 (and a whopping $192,590 as tested, including a $12,750 Lightweight Sport Package) has to be serious about its electric mode, too.

I drove the standard Cayenne E-Hybrid, and even took a spin in the Turbo S E-Hybrid SUV last year. While that left enough of a taste of the Turbo S to be in awe of its performance—and how it masked its 5,600-pound curb weight on curvy, mottled two-laners in central and coastal Oregon—the electric-only chops remained mostly untested.

But with some recent follow-up time with this brutally quick SUV, I had the opportunity to actually plug in. 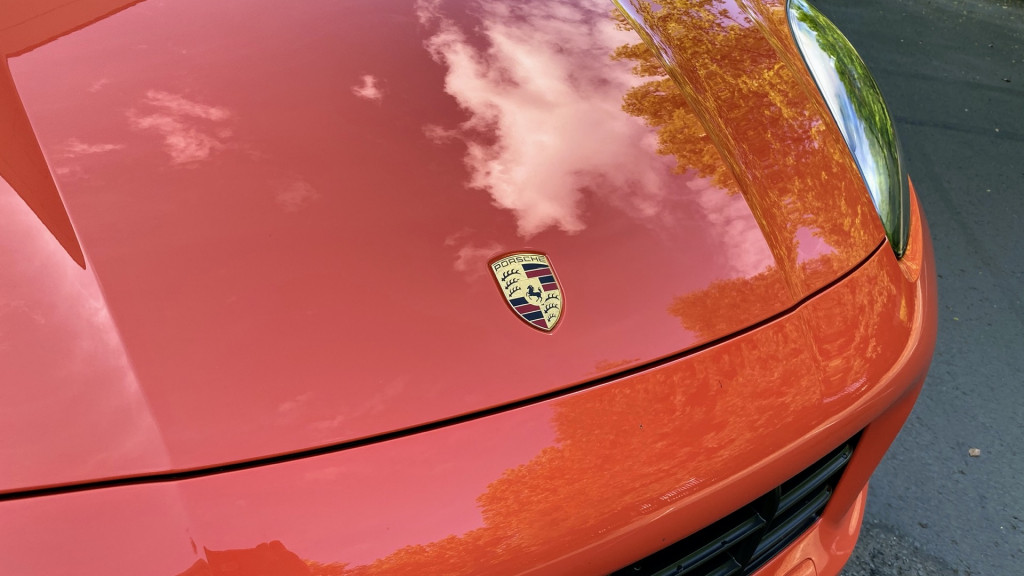 Well, not quite the way owners will. The car I drove was a Euro-spec model—German license plate stashed away in the cargo area, navigation system convinced I was somewhere on the north coast of Spain—and the only charging hardware Porsche had on the ready was a unit that plugged into a 120V AC socket and served it up in Euro Type 2 format. That restricted my charging to overnight sessions (in the range of 8 or 9 hours to full) and prevented me from using my home chargers or those at shopping centers.

This version has the same 14.1-kwh battery pack as the standard Cayenne E-Hybrid, which has a 13-mile electric-mode rating, though the Turbo S version hasn’t yet been officially rated.

With a full tank of gas and a full charge, the trip computer suggested I could do better than that—20 miles of plug-in range and 323 total miles. And I did.

In 57-degree weather I set the climate control to 72, selected E-Power Mode, and off I went out on what I’d call an urban commute, with about 11 miles of 55-70 (and briefly 75) mph freeway cruising, then about 5 miles on a 50-mph divided highway with occasional stoplights, and the remainder on a 30-mph street with more frequent lights. The Cayenne went 16.7 miles before starting up the gasoline engine, and said that we’d been averaging about 1.7 miles per kwh. 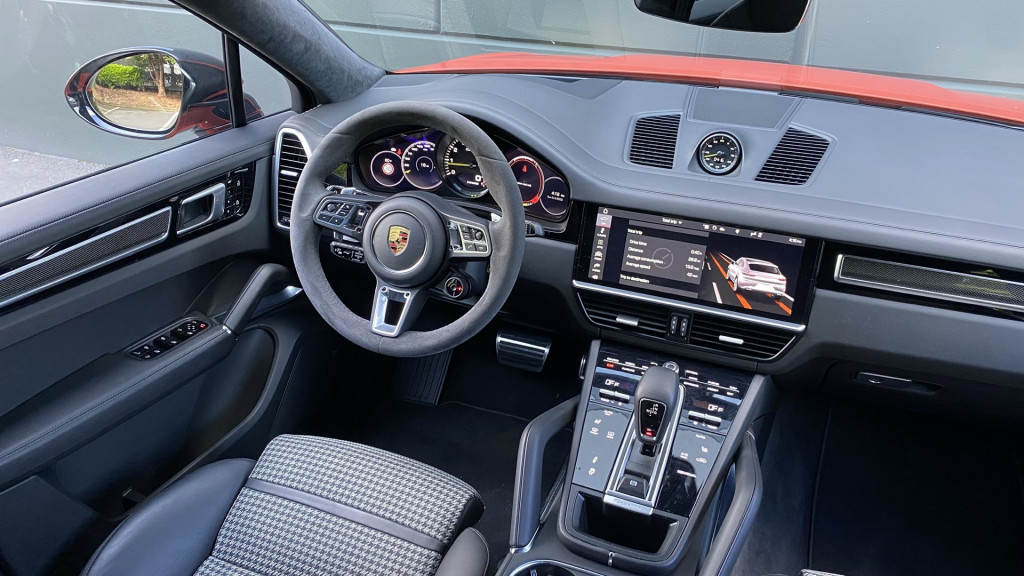 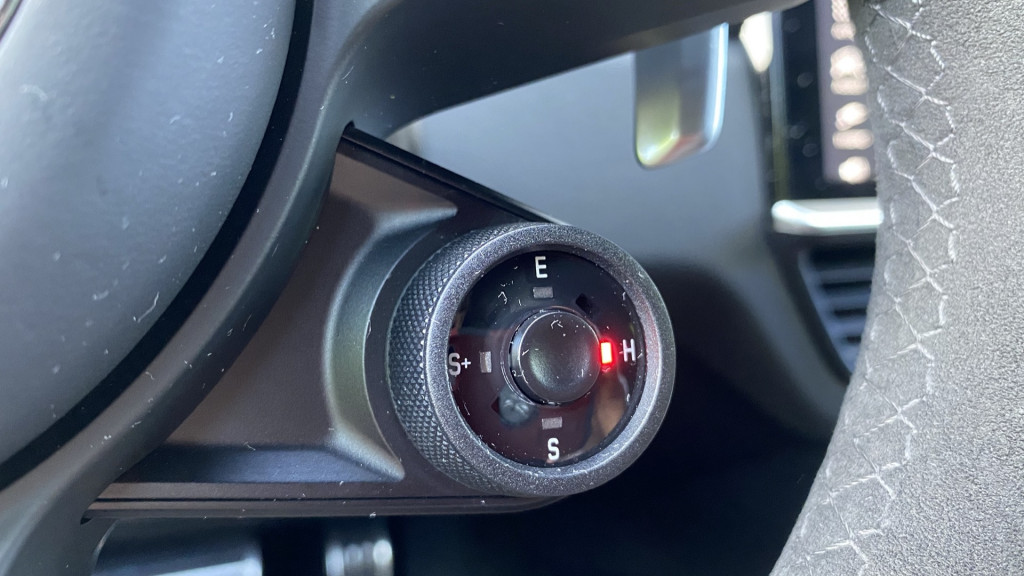 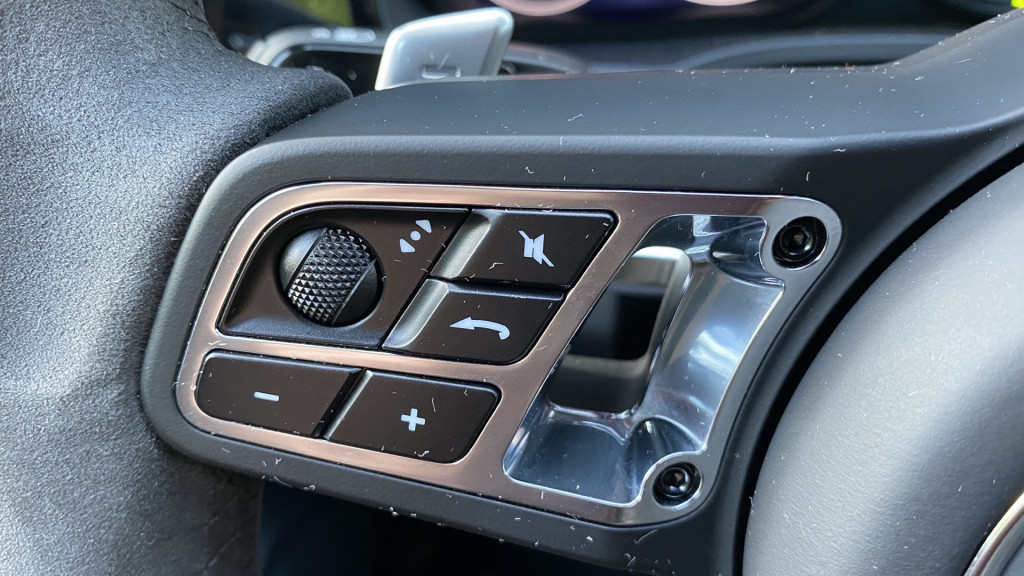 The next day, after another charge and in roughly the same conditions, the Cayenne predicted 18 miles of electric range, and we took it on a second “e-trip” covering conditions that avoided the freeways but mostly followed 35-50-mph boulevards. There, I covered 20.8 miles all-electric, with an indicated 2.5 miles per kwh.

Like many plug-in hybrids, the E-Hybrid looks to a wide range of variables and doesn’t have a firm cutoff; it seems to be saving as much as a third of its battery capacity for maximum-acceleration runs.

Compared with the E-Hybrid, the Turbo S E-Hybrid has a much more powerful turbocharged V-8 engine, mated with a 134-hp electric motor and 8-speed automatic transmission, permitting the engine to be clutched in or out of the mix. Altogether it makes 670 hp and 663 pound-feet of torque.

So many ways to make this thing go

The little rotary switch on the lower right portion of the steering-wheel hub toggles quickly between E-Power, Hybrid Auto, Sport, and Sport Plus modes, which you can also access via the touchscreen. Sport and Sport Plus add the engine to the mix even if you have charge left.

Through the touchscreen you can enable either an E-Hold mode that saves the plug-in charge for later or an E-Charge mode that charges up the plug-in reserve as you drive. You have access there to four different off-road modes—gravel, mud, sand, and rock, plus a four-stage height adjustment for the air suspension. 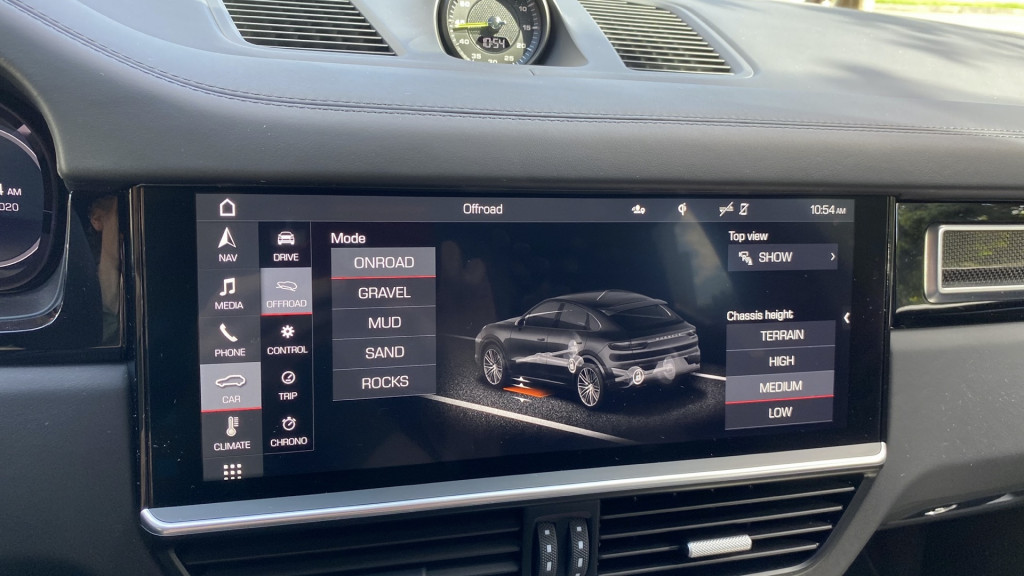 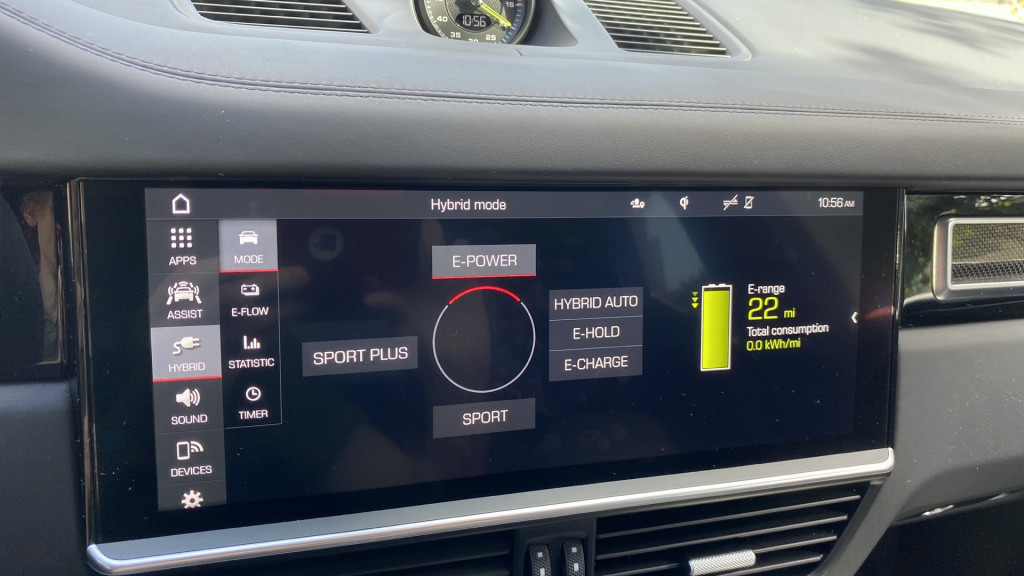 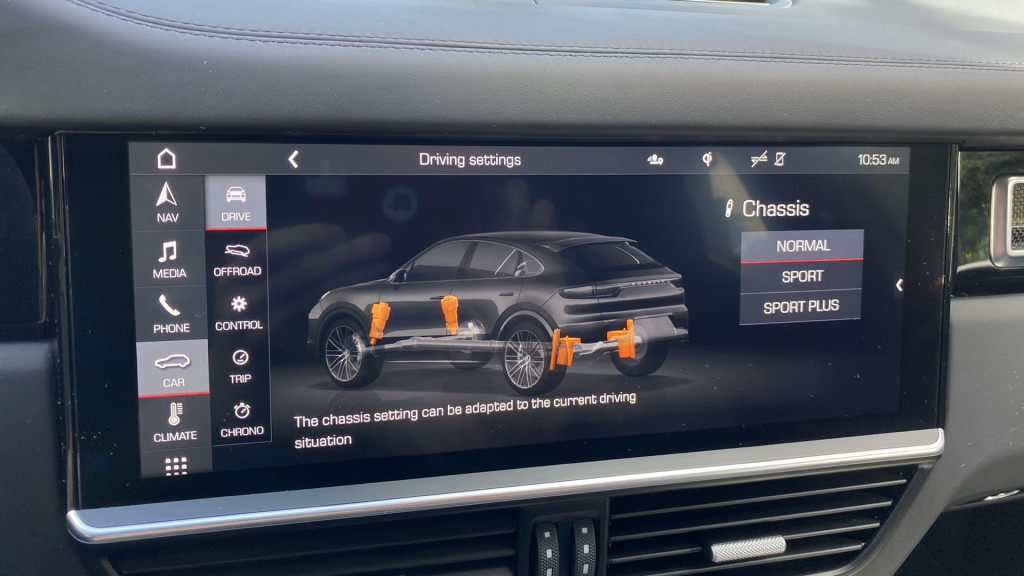 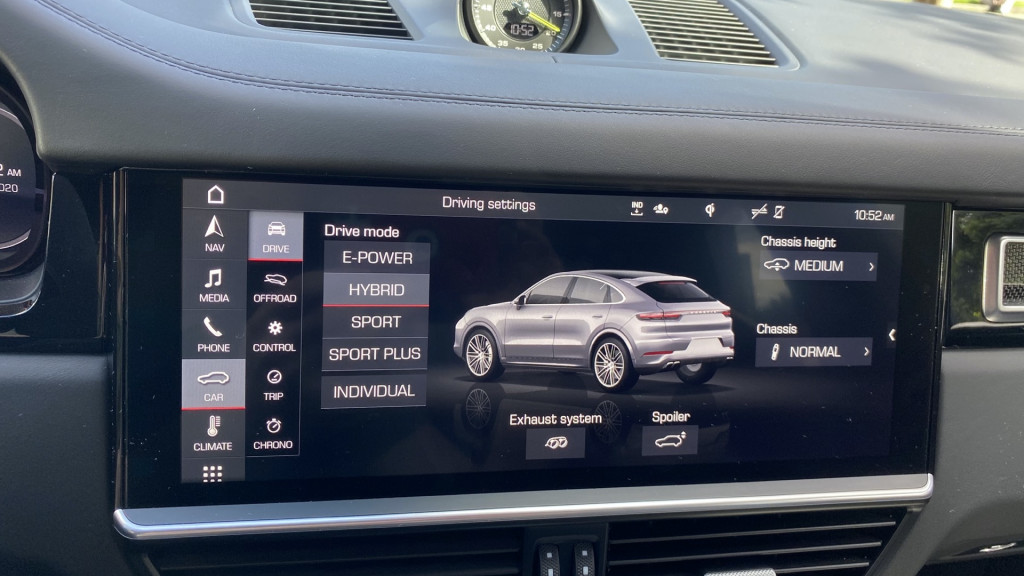 Drivability in the Turbo S’s E-Hybrid mode is easygoing and near-silent—it’s docile. The system is consistent in the way it responds, and manages to keep E-Power all-electric unless you fully push the accelerator to the floor past a detent.

When cruising at speed, one of the more disconcerting things about this vehicle in electric mode is that the largest gauge in the middle of the gauge cluster, the tachometer, sits dormant at zero. You’re also limited to 83 mph in electric mode, and to access the 100 mph faster than that this model can go, you’ll need the engine.

Even though Porsche has put so much thought and effort into its plug-in hybrids, that serves as a constant reminder that electrification is secondary.

Brilliant ride and handling with or without burning gasoline

Choosing to keep the gasoline engine out of the mix doesn’t change this big SUVs ride and handling, which feels surprisingly well balanced for such a high-powered beast. The dampers’ normal mode is on the firm side but compliant enough to diminish jarring impacts, and this one doesn’t fall to the brittle ride and highway tramlining that plagues many luxury SUVs with big wheels and low-profile, 315-wide Pirelli PZero rubber.

There’s no bypass of all-wheel drive in E-Power, either; Porsche makes clear with its energy flow readout that power is going to all four wheels. 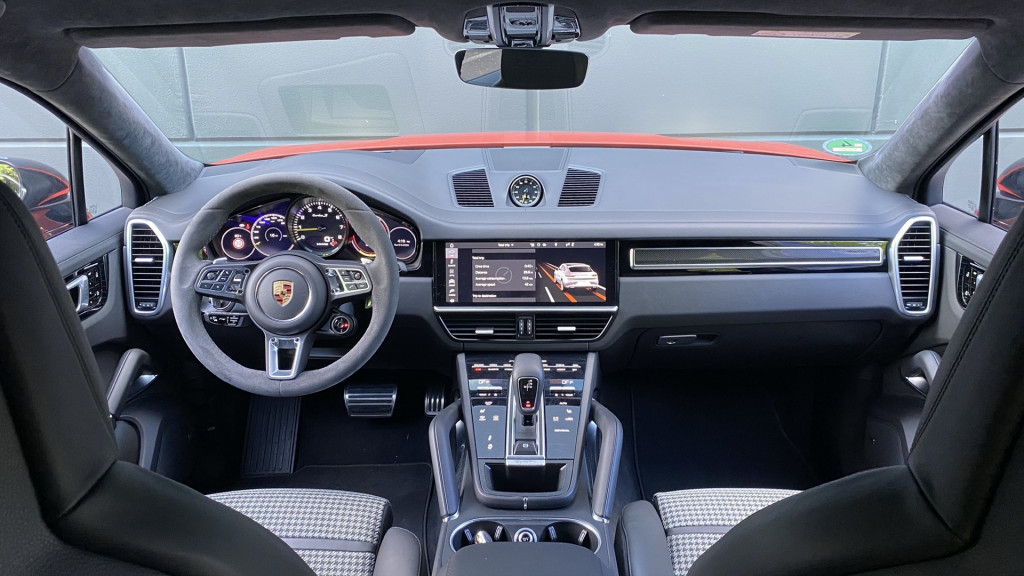 Back in Hybrid mode, I did a 41-mile highway loop, with speeds ranging mostly between 60 and 75 mph and averaged 24.8 mpg. As a worst-case scenario, I engaged the Turbo S’s E-Charge mode and we averaged just 12.7 mpg in a 30-mile, one-hour mix of gas-only driving but gained two-thirds of a charge back in that time. Mixed hybrid driving without a charge is likely to average roughly 20 mpg.

As long as the engine’s on, it’s irresistible to tap into the extra power in bursts. With the turbo V-8 in the mix, the Turbo S E-Hybrid is more vocal. Click a touchscreen button and the Sport Exhaust System opens the gates to a louder mode that brings a sinister crackle when you lift off the accelerator.

It feels like the polar opposite of what the vehicle is trying to be in electric mode. And the vehicle’s Lava Orange paint, which looked a deep red in some lighting conditions and something more mauve in others, seemed to play to that. This whole package is Jekyll and Hyde territory. 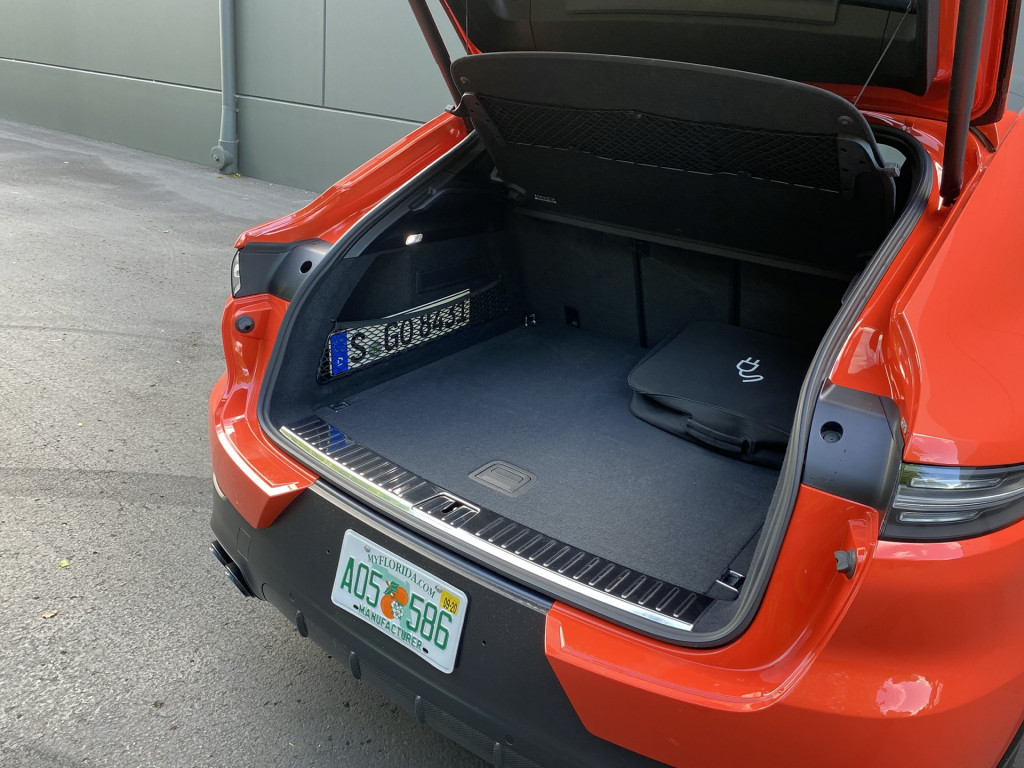 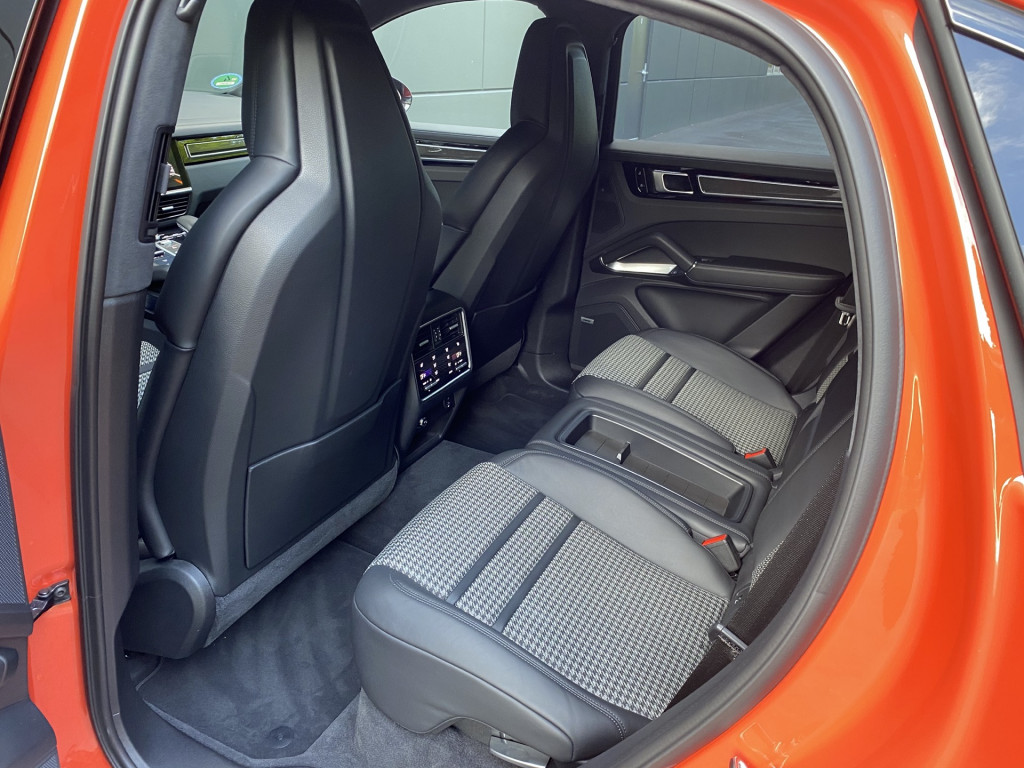 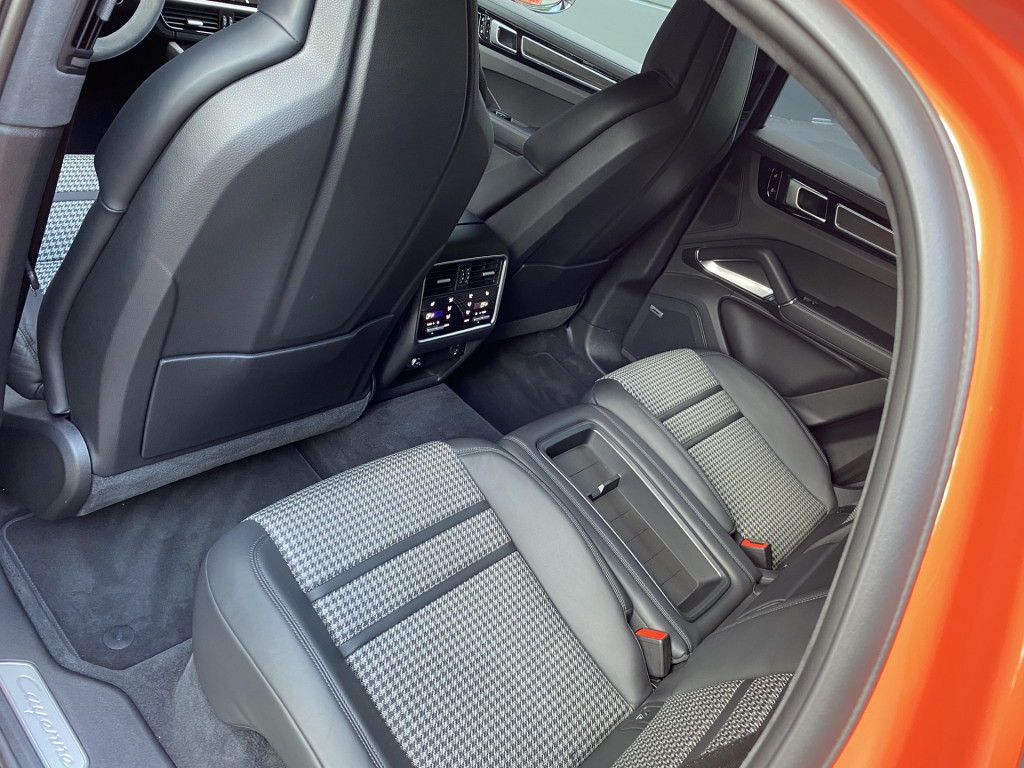 Versus the Cayenne SUV, the Coupe drops about five cubic feet of cargo space officially, but I’d suspect Cayenne buyers aren’t particularly critical about such things. While I found the Coupe offered reasonably good legroom and enough headroom for my 6-foot-6 frame in in back, the tapered roofline and carved-up headliner wreaked havoc on outward visibility, leading me to wonder why Porsche even bothered leaving the small, recessed rear quarter-windows ahead of the hatch.

You’ve got to be kidding if you’re trying to look at the Cayenne Turbo S E-Hybrid Coupe rationally. This is a vehicle you see and want for the image, the bragging rights, the way it makes you feel. And if saving the raucous V-8 for the weekend is what makes you feel good, go ahead and play both sides.