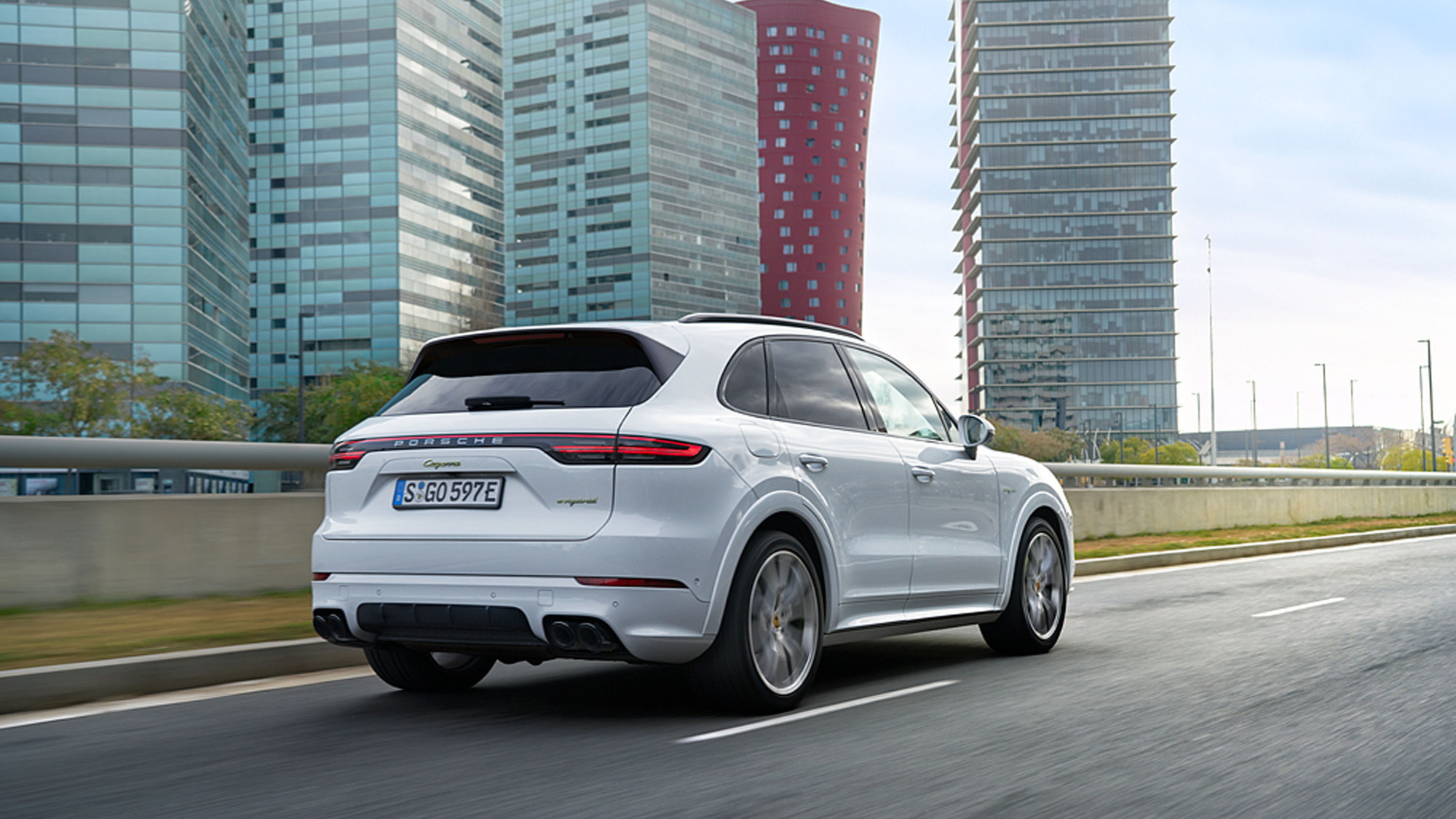 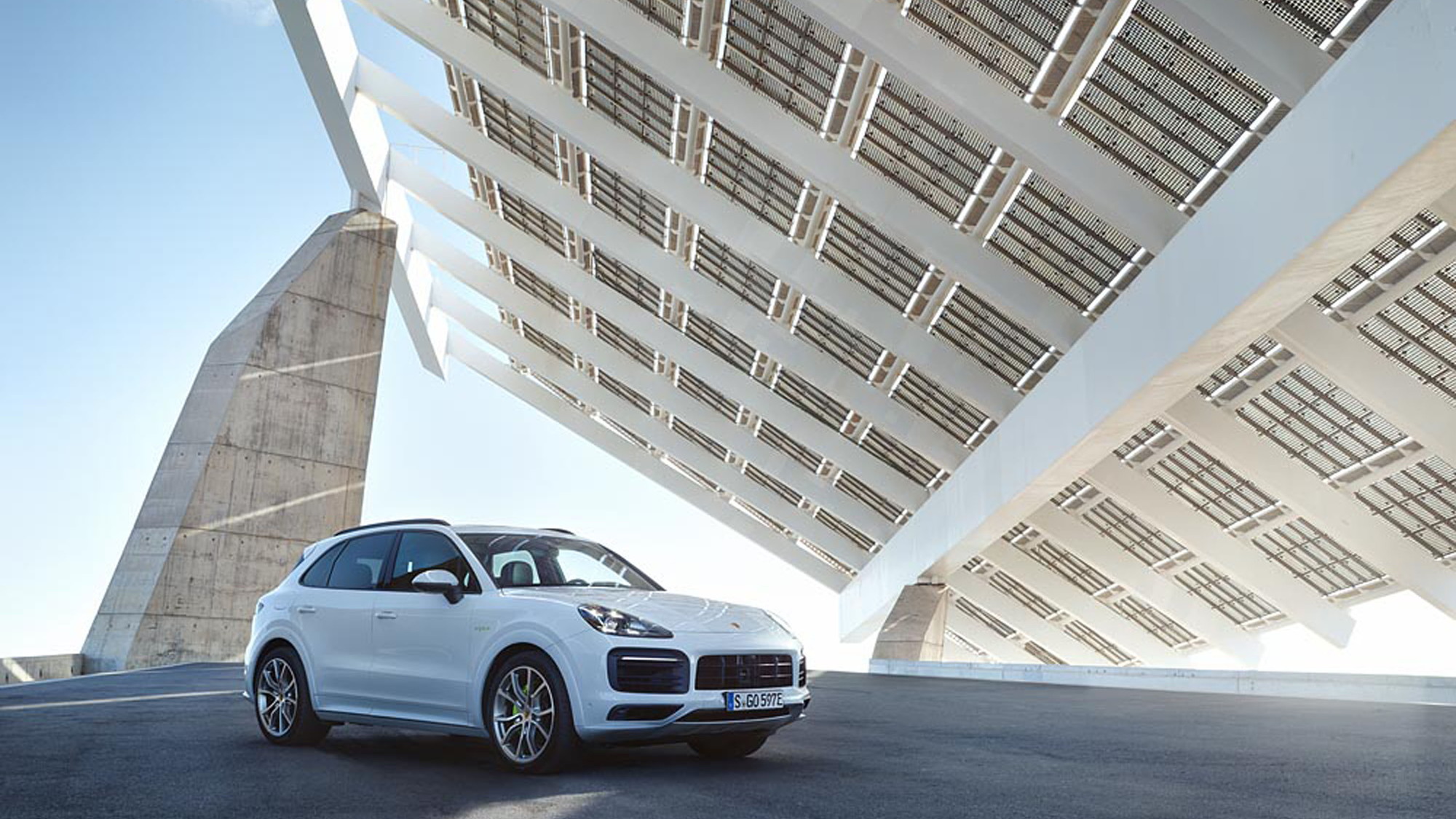 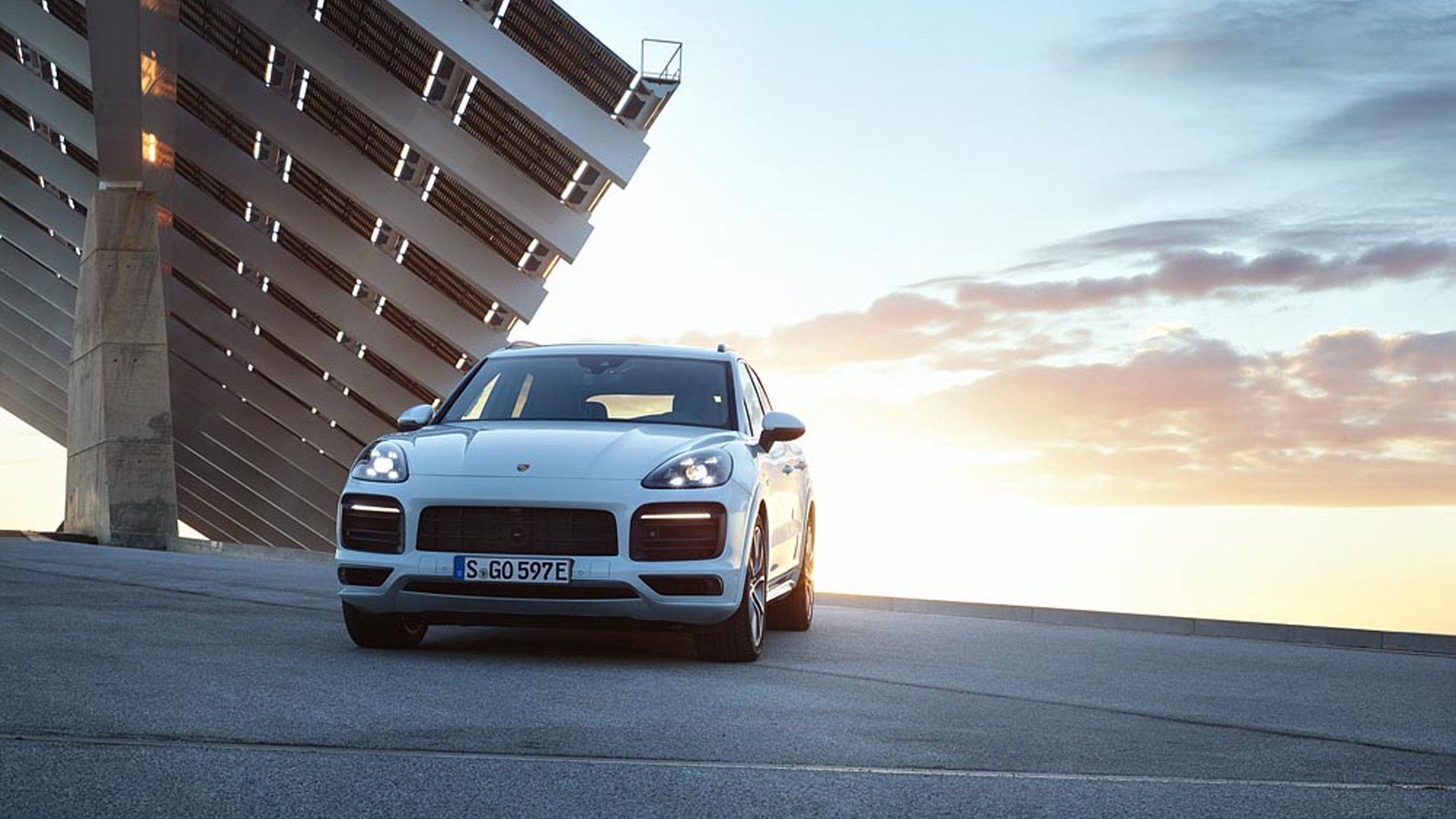 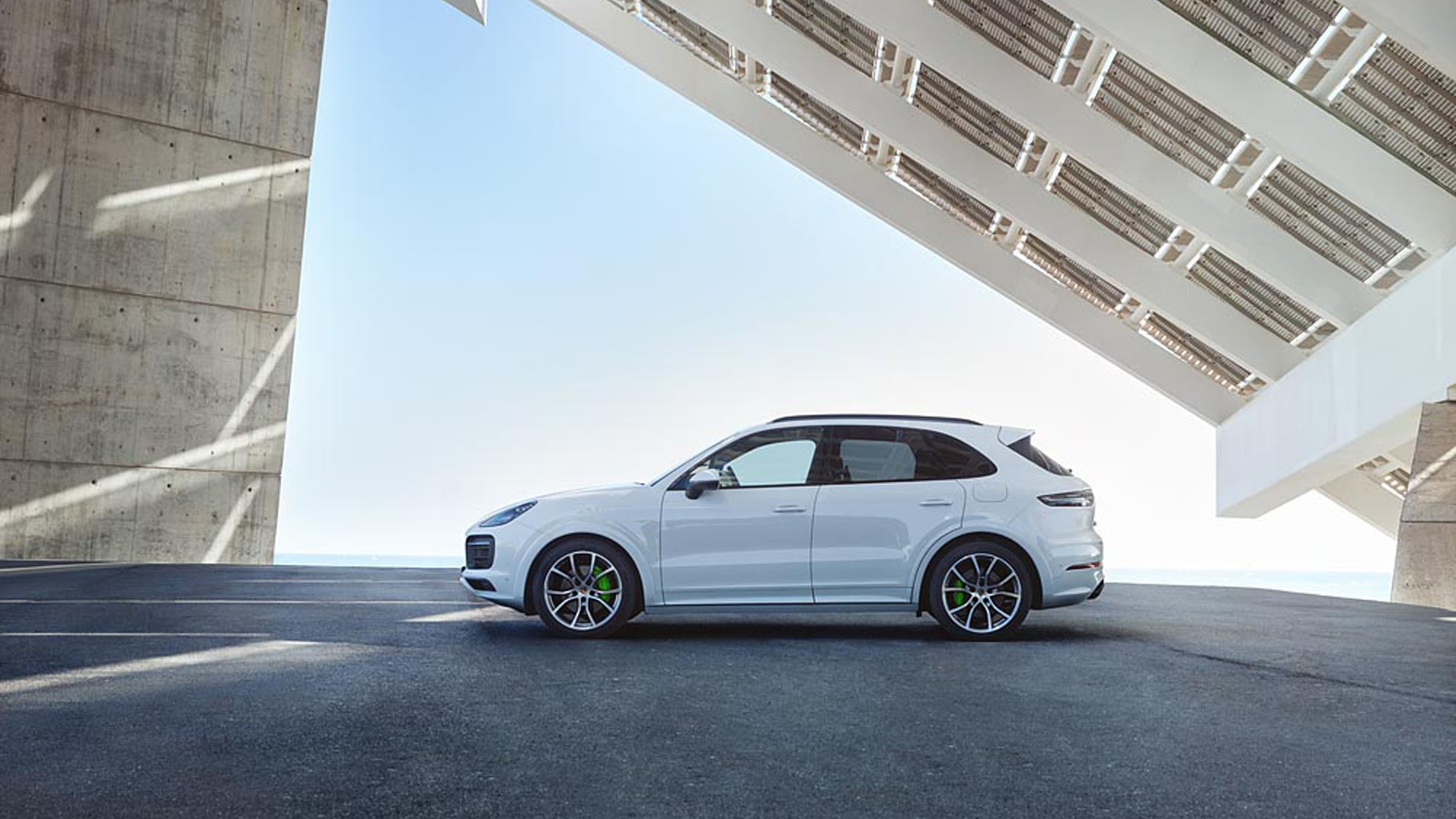 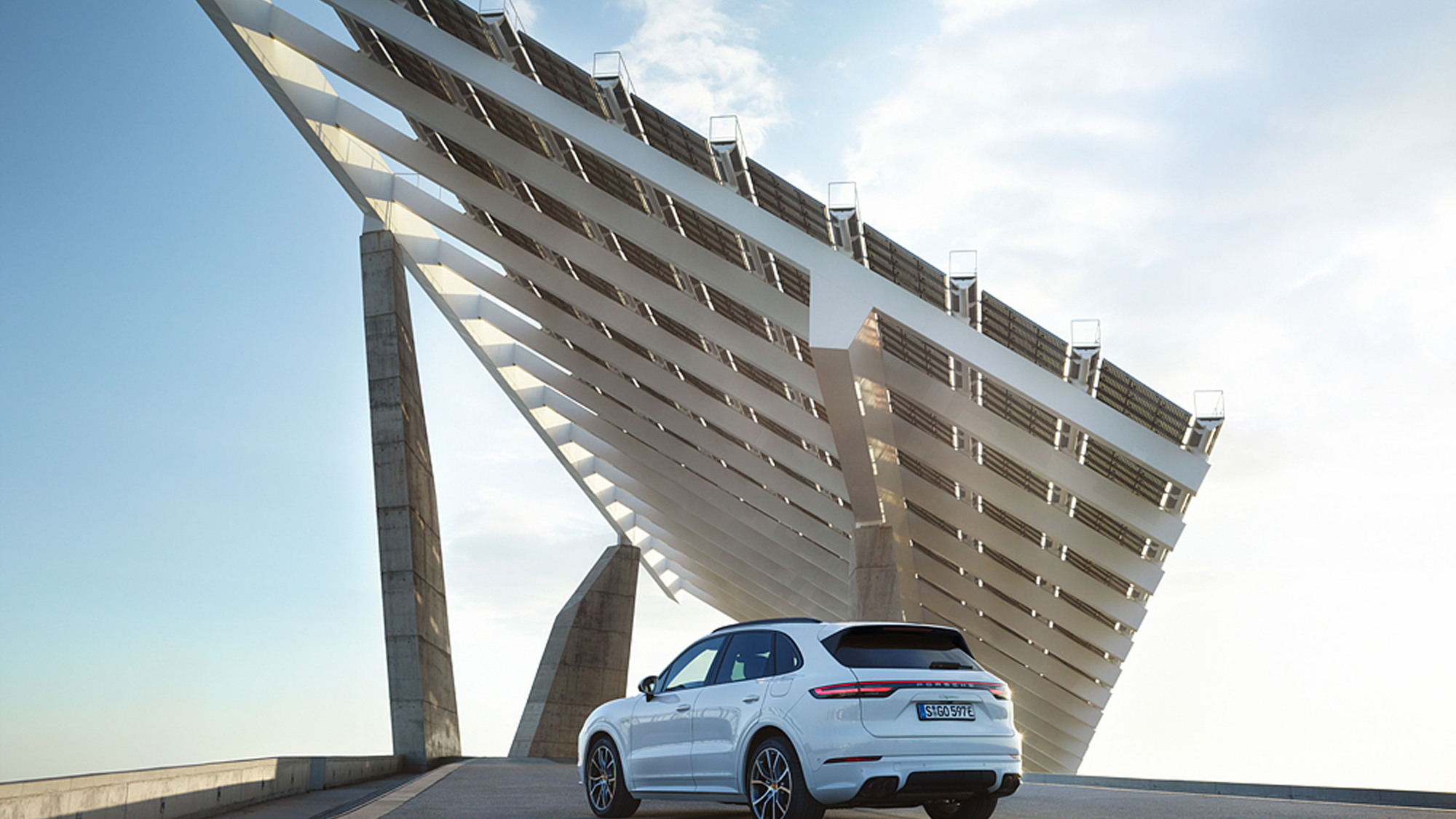 The 2019 Porsche Cayenne E-Hybrid doesn't boast about its plug-in hybrid, eco-friendly credentials. Instead of a big charge port conspicuously placed on one front fender, the Cayenne has matching covers for fuel or electricity on either side of the vehicle.

They're part of its dual-nature: one part a high-performance crossover SUV that's just a hair slower the Cayenne Turbo; another part looking toward an electrified future where internal combustion engines may be outlawed in urban environs.

To achieve the latter, Porsche pairs a turbocharged 3.0-liter gasoline V-6 with an electric motor fed by a 14.1-kwh lithium-ion battery pack tucked under the cargo area.

The lithium-ion battery pack is composed of eight modules consisting of 13 prismatic lithium-ion cells each for what Porsche says is similar packaging, but a higher energy density than the unit used in the previous Cayenne hybrid.

Charging times vary based on either the standard 3.6-kw onboard charger or the optional 7.2-kw unit. The less powerful charger feeds a depleted battery in about 7.8 hours using a 10-amp, Level 2 charger. Find a 32-amp Level 2 connection and the 7.2-kw charger slices that time to just 2.3 hours.

For well-heeled crossover SUV shoppers in Europe, the Cayenne E-Hybrid provides proper town-and-gown experiences. Its 27 miles of electric-only range from a full battery can be saved using an E-Hold mode for urban use in emissions-free zones. An E-Power mode keeps the vehicle in electric-only mode.

We'll have to wait until EPA testing closer to the Cayenne E-Hybrid's on-sale date early next year for fuel-economy estimates on the more stringent cycle stateside.

Interestingly, the Cayenne E-Hybrid features an E-Charge drive mode that uses the gas engine to drive the car and charge the lithium-ion battery simultaneously.

Yet it's still a Porsche and still an SUV

The Cayenne E-Hybrid's positioning within the Porsche lineup is unique. At about $81,000, it's about $3,000 less than the Cayenne S—and it's both more powerful and faster.

Porsche says that the powertrain's combined output is 455 horsepower and that its 516 pound-feet of torque comes on at just 1,000 rpm. Power goes to all four corners via an 8-speed automatic transmission, and Porsche says that the gearbox's two highest ratios have been designed specifically for highway fuel-efficiency.

With a 0-60 mph estimate of just 4.7 seconds, Porsche says that not only is the Cayenne E-Hybrid 0.7 seconds quicker than its predecessor, it's also actually a few ticks zippier than the Cayenne S.

Additionally, the Cayenne E-Hybrid brings with it a few optional features new to the automaker's crossover SUV lineup, like massaging seats, 22-inch alloy wheels, and a head-up display.