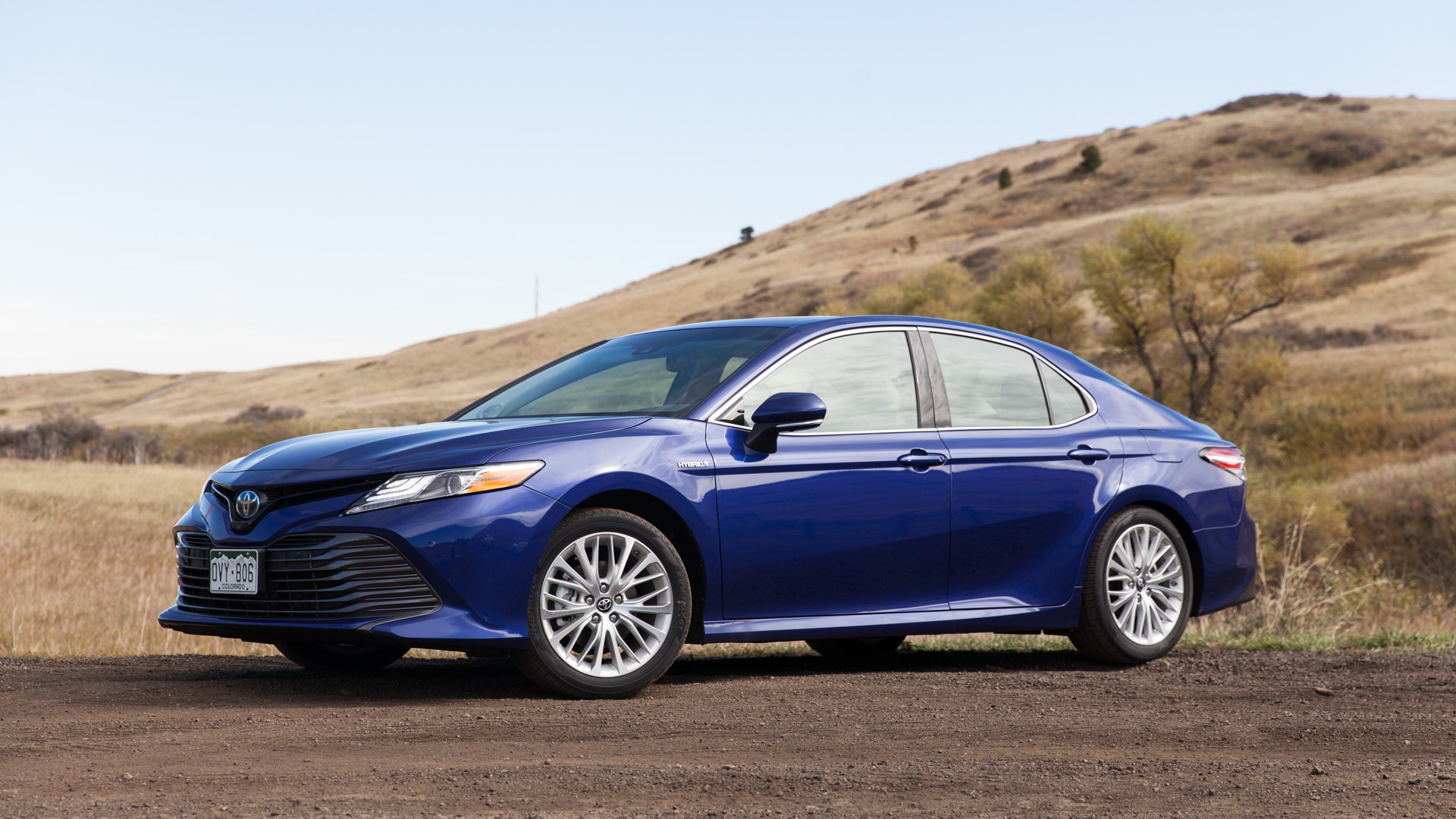 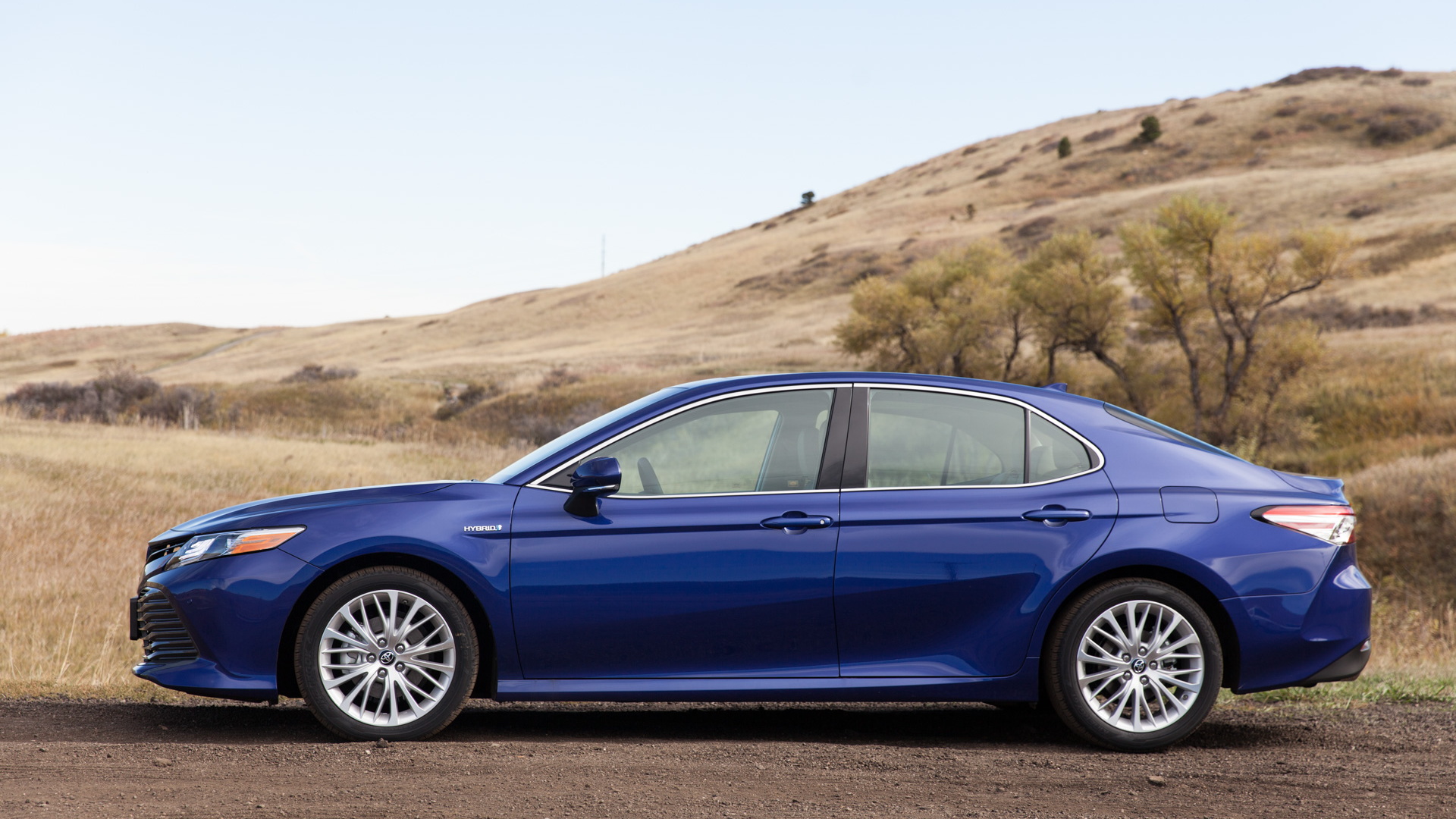 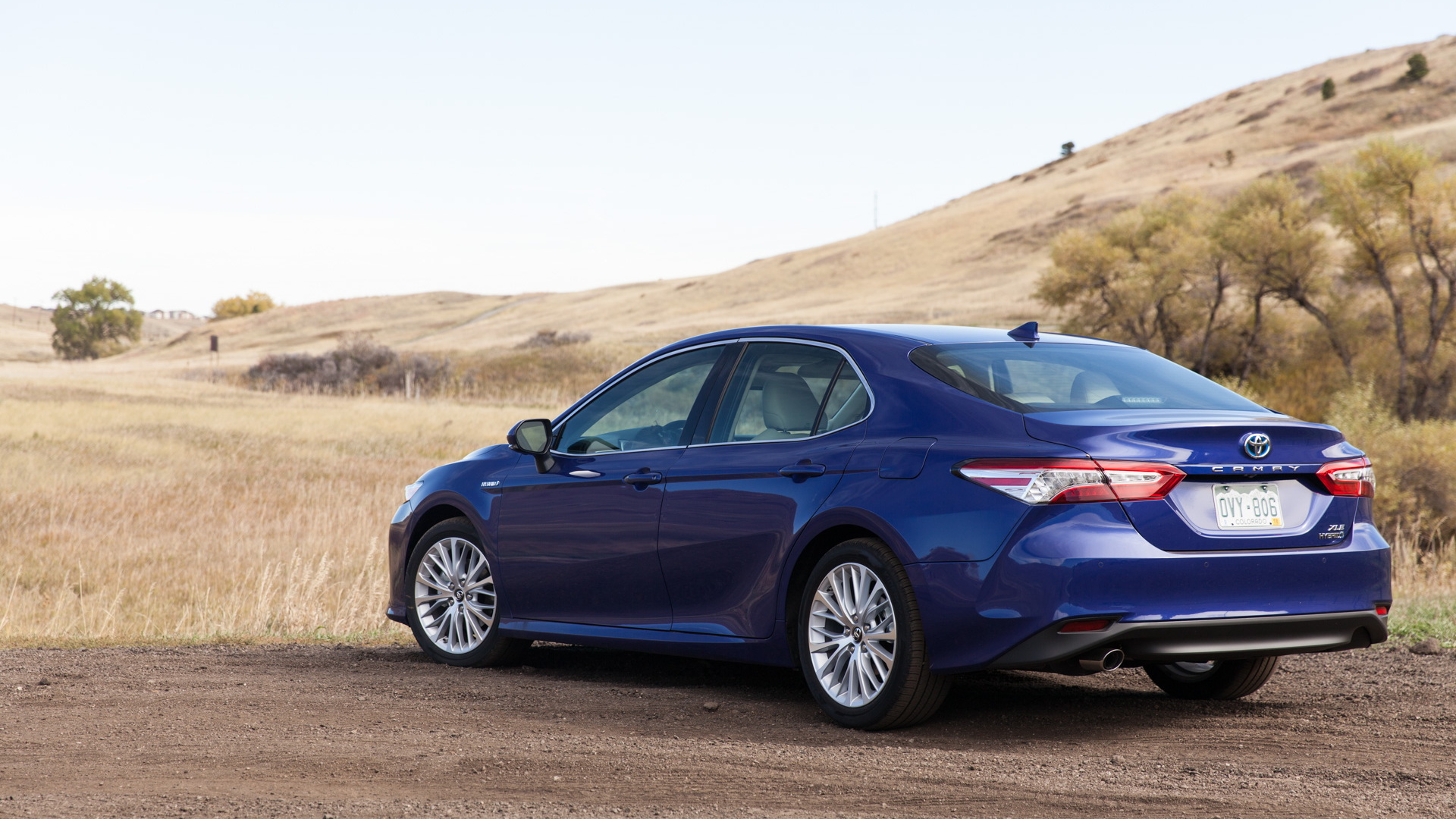 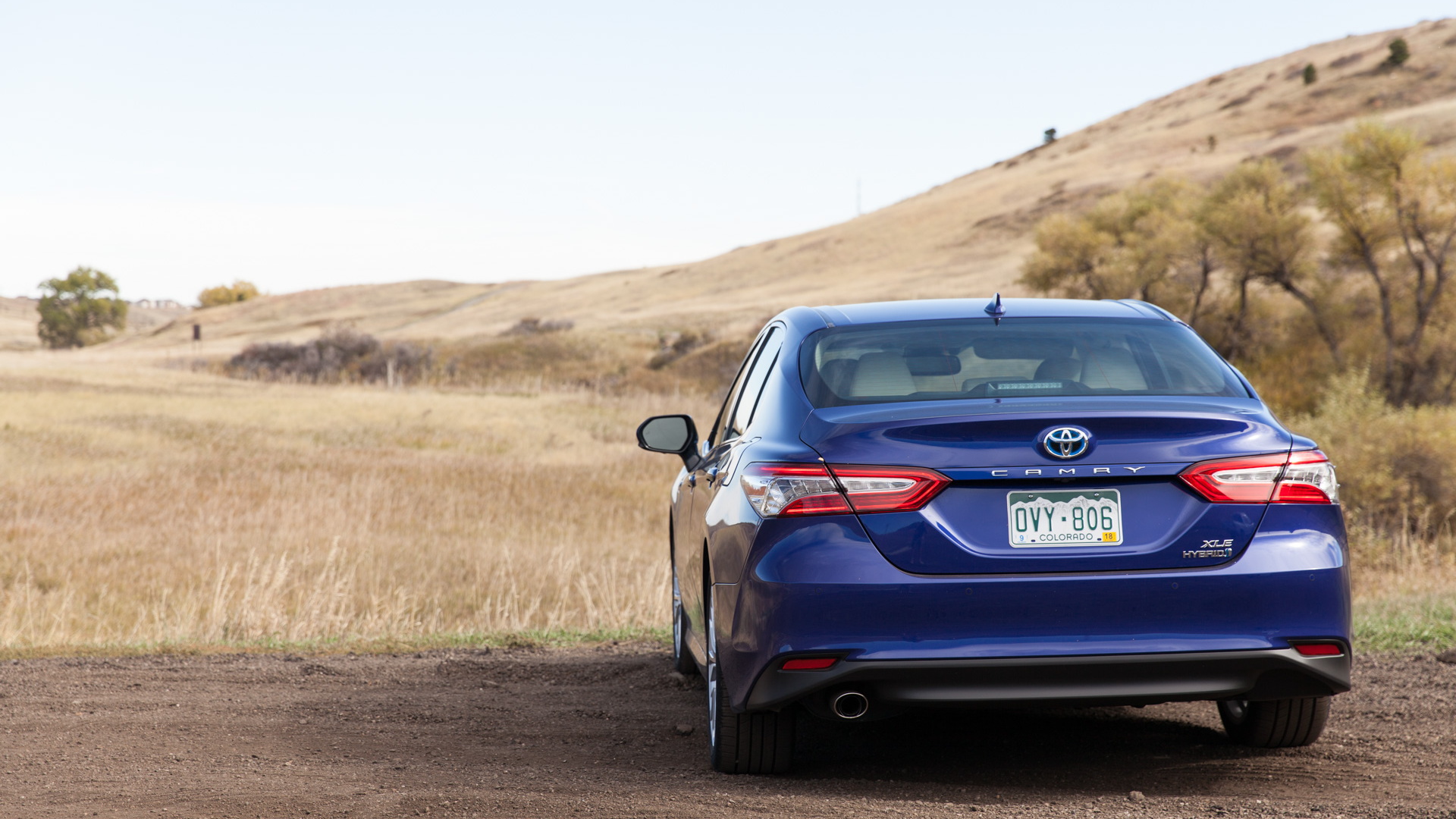 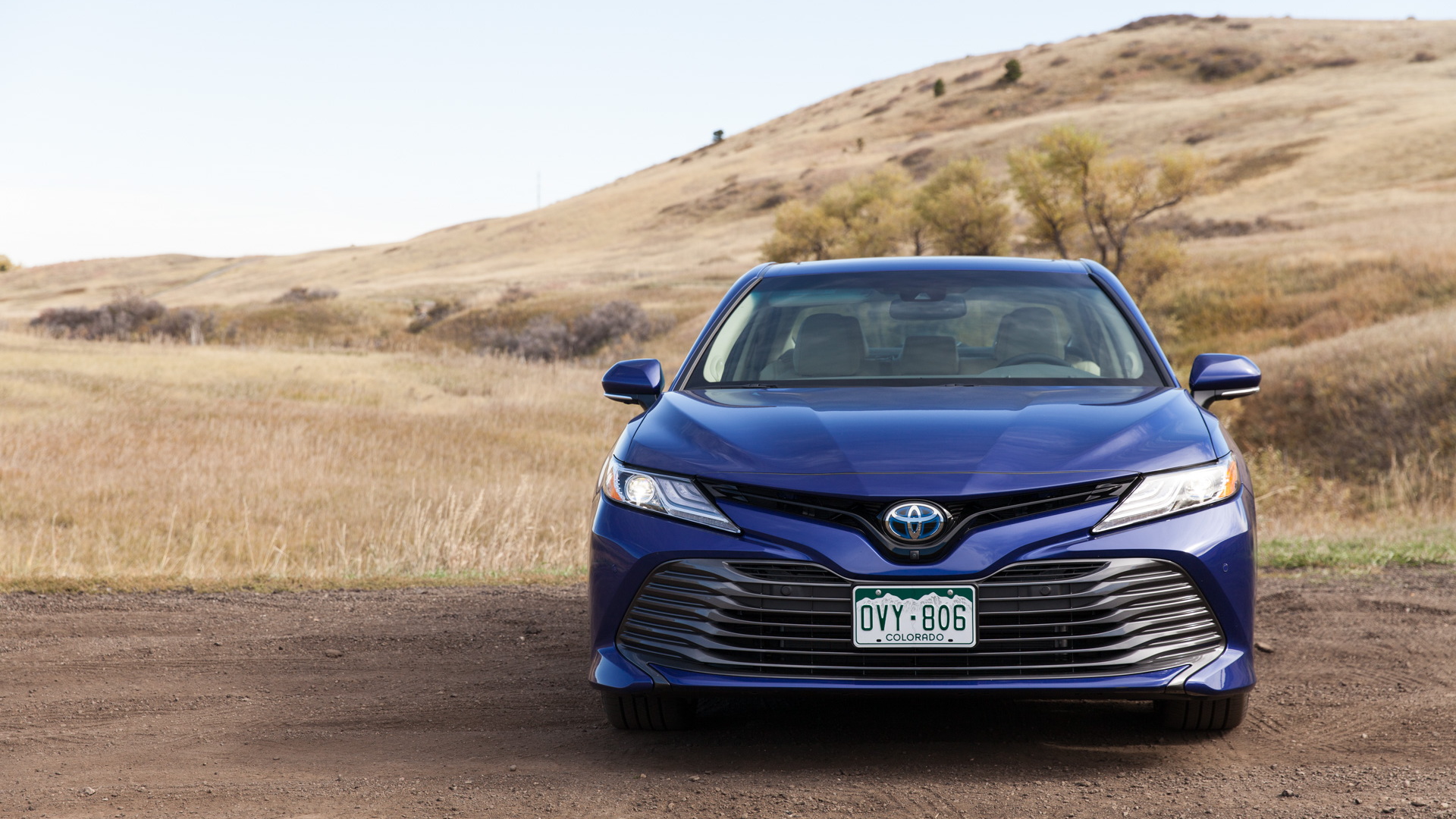 Toyota can’t be blamed for a lack of effort: The 2018 Toyota Camry Hybrid is dripping with it.

From the creased hood and cascading brow to the Modernist center console enclosed by flickers of chrome, the mid-size stalwart is anything but lazy.

Our first, limited exposure to the hybrid sedan left us impressed, but with unanswered questions.

Namely, how the nickel-metal hydride battery setup in the XLE Hybrid would fare in providing real-world fuel economy.

Also, what kind of Camry Hybrid can customers expect to find on dealers’ lots? After all, the early pre-production prototypes we drove were rough around the edges in a few places.

The results are mixed, we found.

Before we set out on our drive, we topped off the tank and reset the trip meter. Our heads told us that the world is a better place when computers give us overall mileage; our guts told us to trust, but verify.

The EPA said we wouldn’t use much gasoline anyway. The 2018 Toyota Camry XLE Hybrid we tested is rated by the feds at 44 mpg city, 47 highway, 46 combined.

Winding Colorado roads, stop-and-go Denver traffic, and exurban stretches at the base of the Rocky Mountain foothills gave us a reasonable overall sample—but draining the tank would have required a jog to Utah and back.

The Toyota Camry should be familiar to anyone not living on the moon for the last four decades or so.

There’s nothing thrilling about the Camry, and that’s OK. Sometimes a car is just a car.

The evolution here is that the Camry makes a strenuous effort to be stylish, a departure from previous generations.

There is honest-to-goodness art here, but some of the Camry’s outward styling elements exist only to serve themselves. For example, there’s no reason for the lower nose to look that complicated. Full stop.

Other elements like the subtle curve over the rear roof pillar look just fine.

The hybrid version doesn’t get its own dedicated look, just a couple of badges around the car. If you’re looking to wear your green on your shirtsleeve, the Camry Hybrid ain’t it.

The Camry Hybrid is powered by an Atkinson-cycle 2.5-liter inline-4 paired to an 88-kw electric motor and 1.6-kwh battery pack. The total system output is 206 horsepower—153 kw in new money, if you prefer.

That power is shuffled through an electronically controlled two-motor hybrid system that substitutes for the transmission.

It's programmed to hold the Camry Hybrid in the sweet spot for efficiency that inadvertently trains drivers to use the right pedal judiciously. Hammer on the throttle and the Camry Hybrid gets noisier—though not initially faster.

Thanks to the batteries, the Camry never feels short on power, but it often feels like it’s catching up to the driver.

Tapping the Camry into Sport mode increases throttle response but doesn’t subvert physics: all of the safety, fuel saving, and comfort tech makes this Camry weigh 3,571 pounds in this configuration.

Despite our efforts into goading the Camry into something it isn’t (a racecar), its hybrid system excelled at what it is (fuel-efficient). Our calculators confirmed what the onboard mpg computer showed: just over 50 mpg combined on a 150-mile journey in a mix of highway, urban, and suburban driving.

As the day wore on, and the miles piled behind, the Camry blended further into the background.

An impromptu sound sample showed that the Camry’s cabin hummed along on the interstate at roughly 80 db—not whisper quiet, but just quiet enough not to intrude on normal conversation.

It’s nearly impossible to hear the engine kick on when it’s needed. Engineers at Toyota have revised the Camry’s Power Control Unit, which has been placed directly above the transaxle to reduce parasitic loss on the driveline and improve efficiency.

Toyota estimates that the compact design, and placement of the PCU reduces energy loss by roughly 20 percent. Better cooling has increased efficiency by 10 percent more, they say.

That updated PCU features a better efficiency algorithm that coaxes the Camry Hybrid into a new “sail” mode that reduces aggressive engine braking during coasting, a crucial habit of fuel-efficient drivers the car now delivers automatically.

The Camry Hybrid’s so-called “Auto Glide Control” may feel like a step back from efficiency-first driving, but it’s a step forward for overall usability—especially for first-time hybrid buyers. During our daylong drive it ironed the western Denver foothills into pencil-straight roads.

It’s also a microcosm for the newest Toyota Camry Hybrid in total.

Ergonomically, Toyota should be given mulligans for its volume knob placement (too high), its infotainment (just use Apple CarPlay/Android Auto, already!), and interior storage (beyond the center console, there isn’t much).

The car is working so hard that its shoes may as well squeak on the parquet floors.

The one thing it does better right now than any other hybrid mid-size sedan, combined fuel economy, thankfully doesn’t take any effort at all.