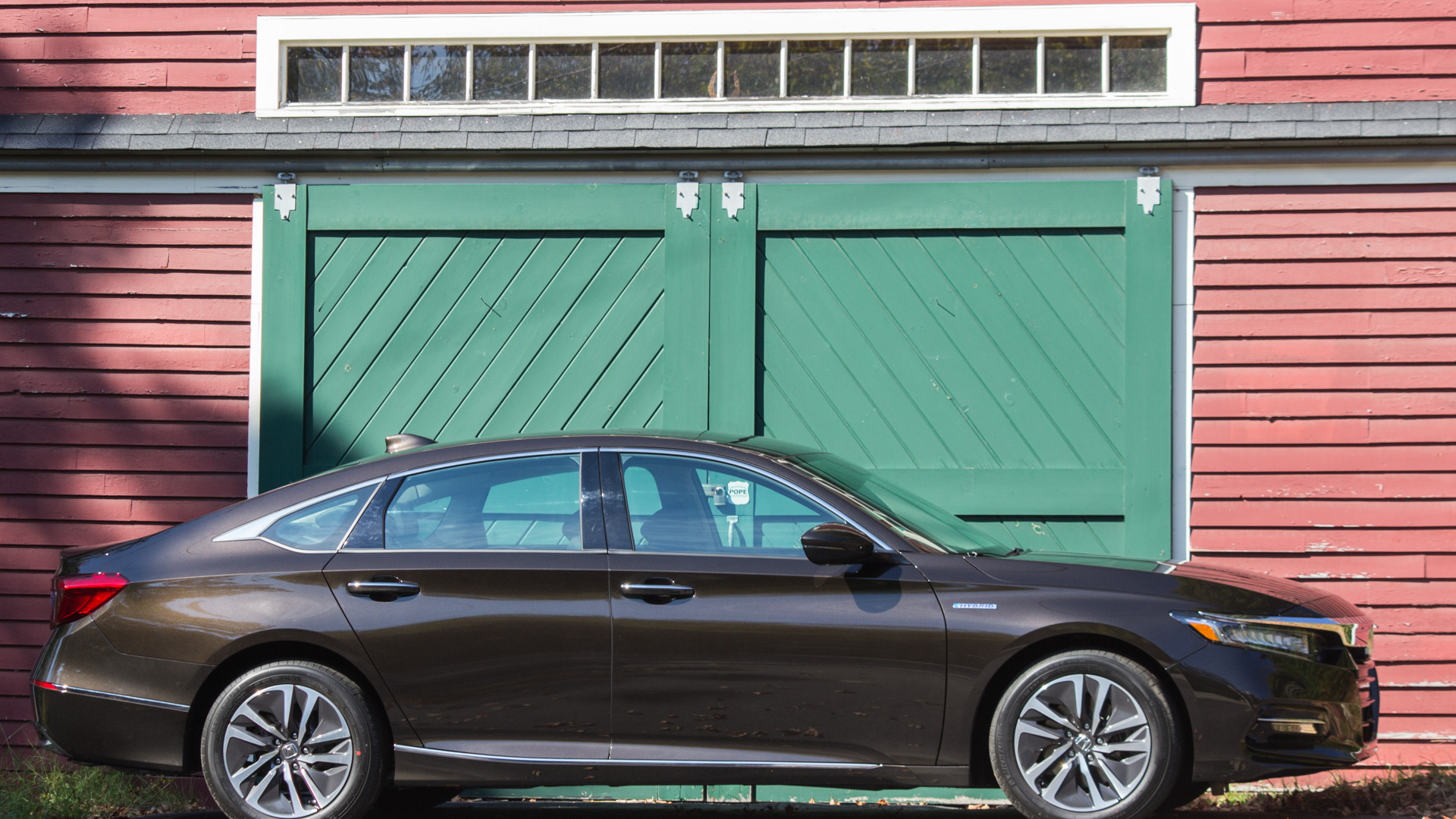 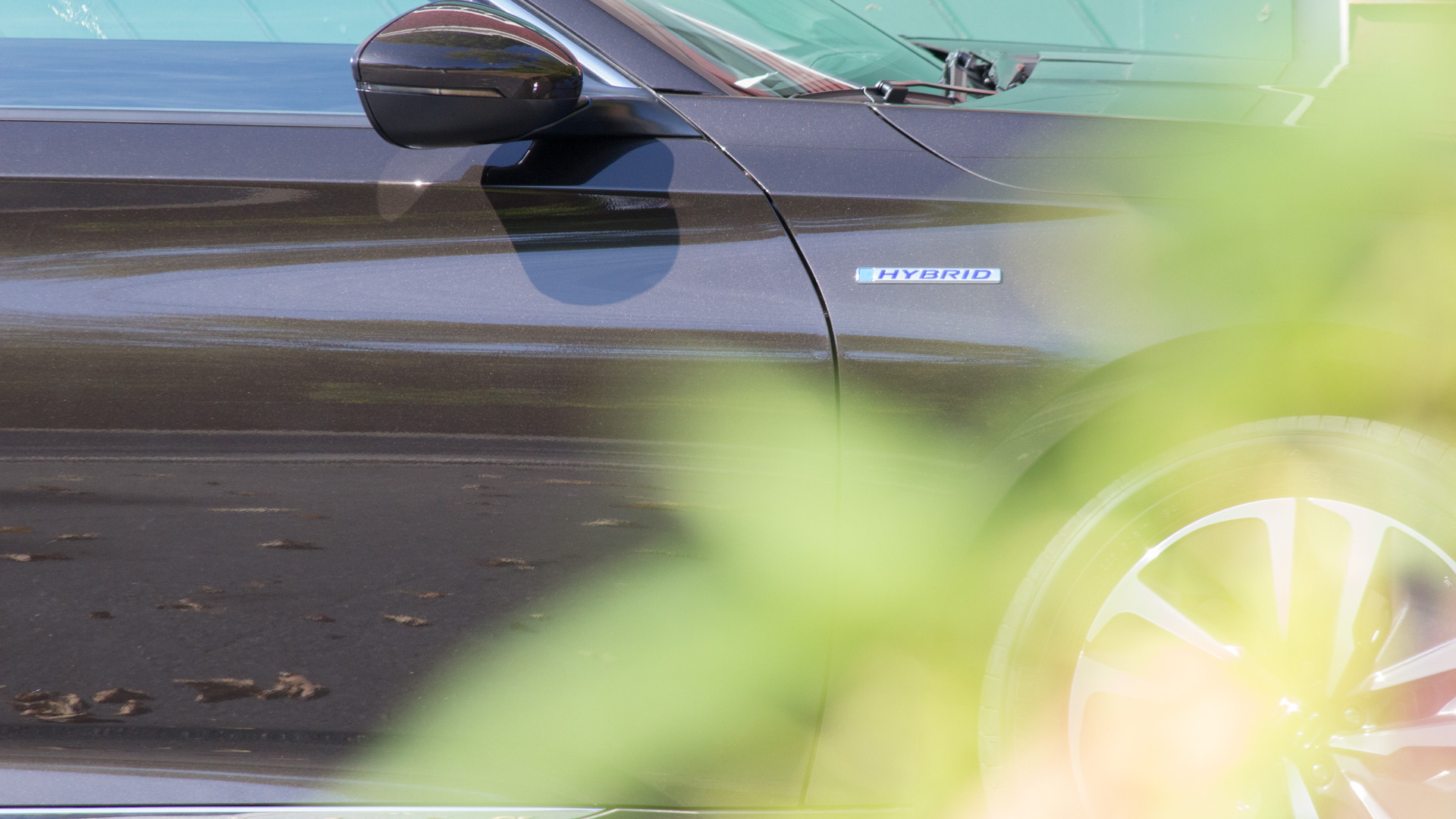 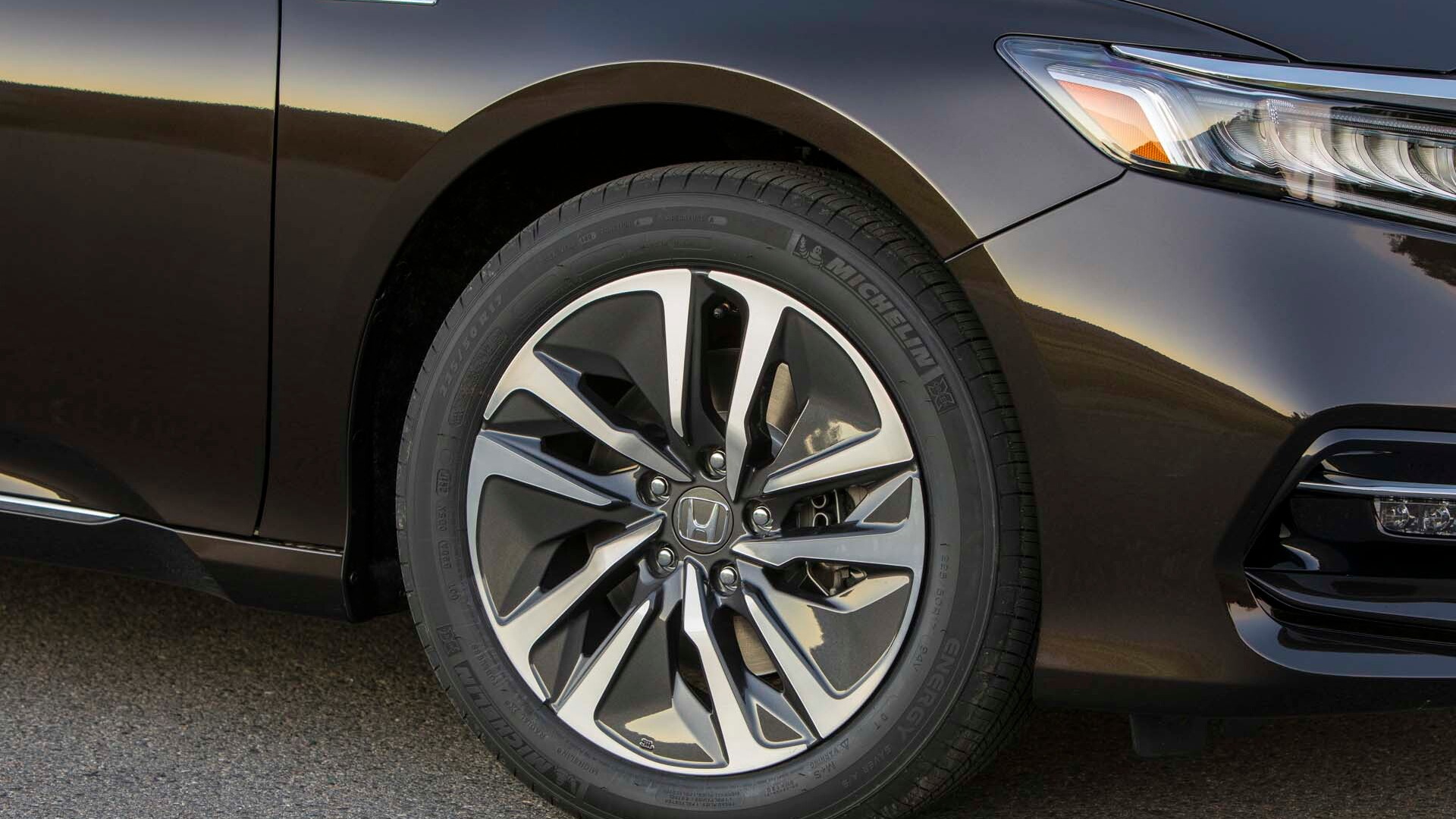 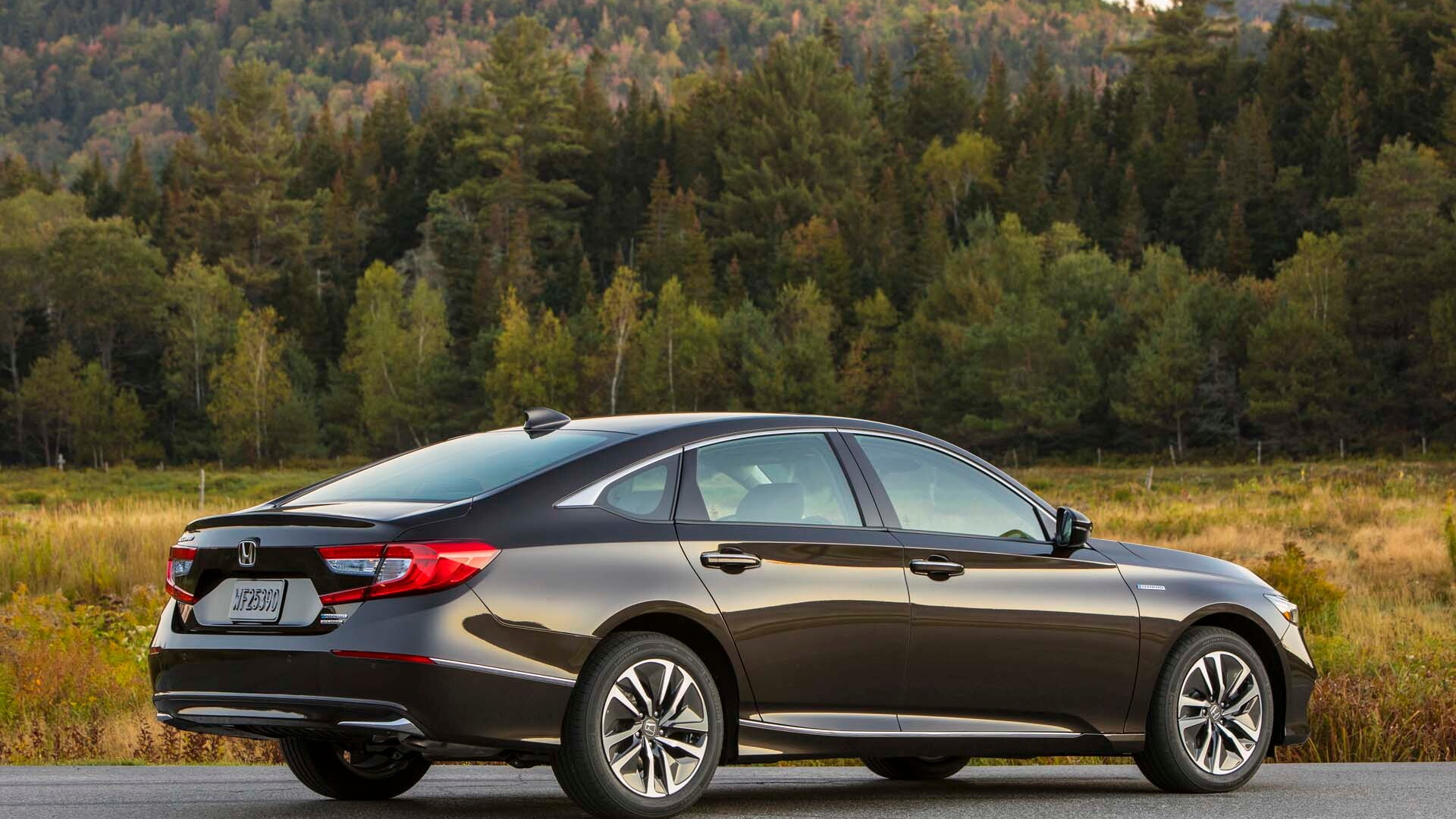 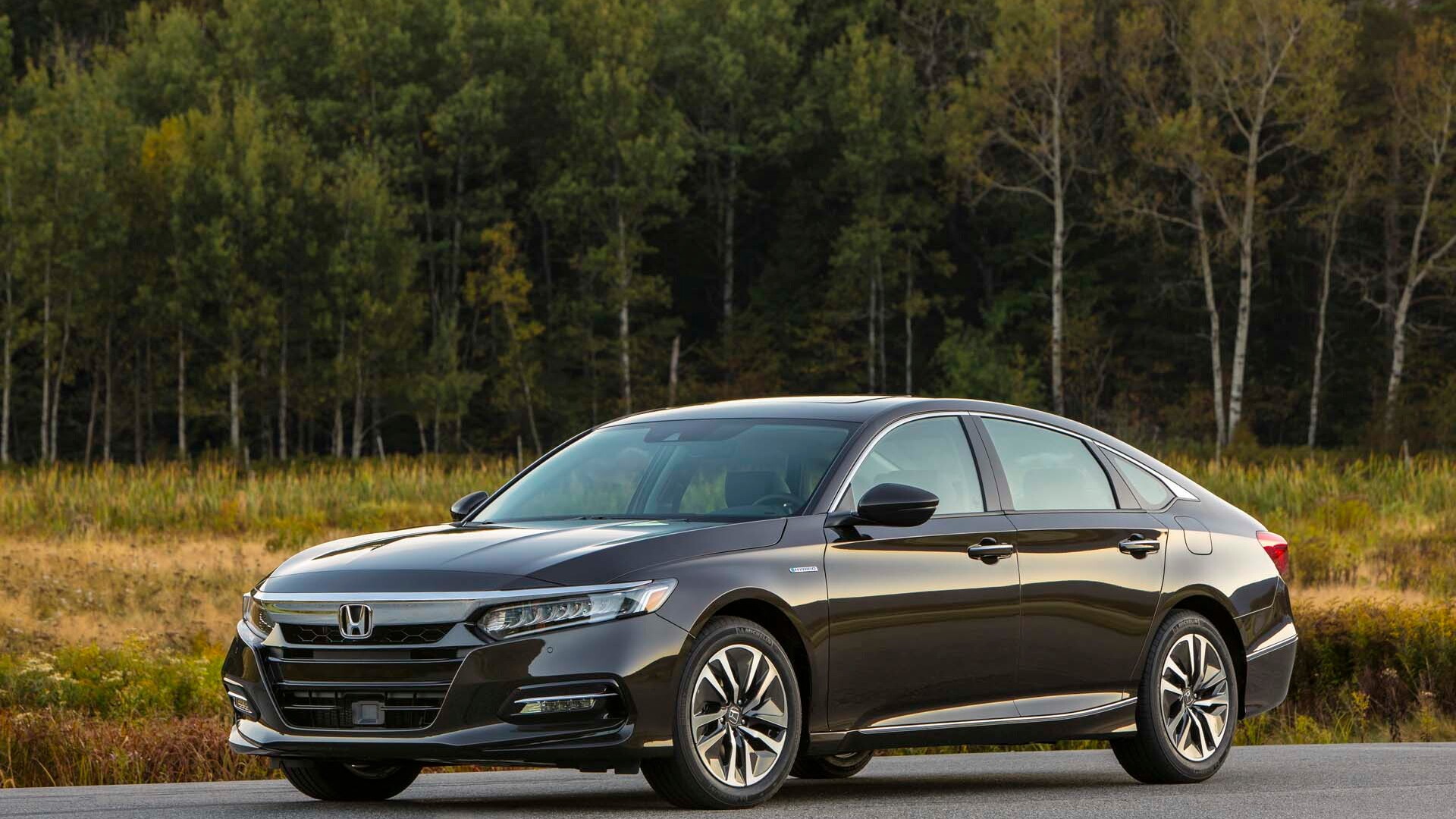 It’s easy for the 2018 Honda Accord Hybrid to get lost.

Short of small “Hybrid” badges on the front fenders, not much on the car’s exterior says it's powered by electrons. There’s no plug-in variant for now (a role reserved to the Clarity Plug-In sedan), and the latest hybrid Accord is built alongside other Accords in Ohio this time around.

Even the battery packs, which have been moved from the trunk to underneath the rear seats, don't intrude the way like they used to. Will buyers miss having less trunk space than other Accords? (Editor's Note: Probably not.)

The 2018 Accord Hybrid just blends in, for better or worse.

Honda let us take the mid-size hybrid sedan for a quick spin around the brilliant hills of New Hampshire. The very early, pre-production model gave us hints of what’s to come when the sedan goes on sale early next year—but only hints.

And it’s far more nuanced than we could have imagined.

Honda’s keeping quiet on mileage figures for now, but not for the reasons we imagined.

The new Accord is lighter, lower, and cuts a smaller hole in the air than the last model, but the hybrid powertrain is effectively the same from the last generation.

During heavy acceleration or high-speed cruising, a clutch locks the engine and motor together to power the front wheels—a “parallel hybrid” drive—that is more efficient.

Power is slightly up from the last-generation, but Honda officials expect that the Accord Hybrid will manage the same fuel-efficiency ratings as the outgoing model: 49 mpg city, 47 highway, 48 combined, or perhaps slightly better.

That may be a letdown for Accord Hybrid shoppers looking to eke out more mileage than the most-efficient Camry Hybrid version that gets over 50 mpg combined.

Good news: Honda says that the thermal efficiency of the internal combustion engine is up to 40 percent (compared to 38.9 percent of the last generation). The batteries are also physically smaller this year too, which helps the Accord fit a bigger gas tank between the rear seats and the trunk—14.8 gallons in the normal Accord vs. 12.8 gallons in the hybrid.

Switches between series and parallel operation were fairly seamless, and in our drives, not readily noticeable. Honda says the noises we heard in our pre-production car will be ironed out before the car goes on sale early next year.

An EV-only mode can force the Accord Hybrid to travel on electrons alone, but only for short distances—a few miles at best. Officials from Honda are keeping quiet on the Accord Hybrid’s battery size for now, so determining capacity and gas mileage wasn’t possible on our drive.

New for 2018 is a base Accord Hybrid that slots beneath the top EX and Touring trims. It had been noticeably lacking from the lineup in prior years. Honda hasn’t yet announced pricing for hybrid models.

The new base Accord Hybrid, roughly equivalent to a conventional Accord LX, will likely be the most affordable hybrid in the range when it goes on sale later this year.

Honda executives say the LX will comprise roughly one-fifth of all overall hybrid sales, and may compete with the base Camry Hybrid that starts at $28,695, including destination.

Accord Hybrids get most of the features found on the new Accord including standard HondaSensing, a suite of advanced safety features that includes forward collision warning with automatic emergency braking, adaptive cruise control, active lane control, and traffic-sign recognition.

Blind-spot monitors and a head-up display will be available on top Accord Hybrid Touring versions.

Despite the addition of batteries and a unique powertrain, Honda says hybrid models will add only 30 pounds or less to the weight of comparably equipped conventional Accord sedans with the larger, 2.0-liter turbo-4. The base Hybrid tips the scales at 3,342 pounds, and a fully loaded Hybrid Touring checks in at 3,428 pounds.

That should be a boon to hybrid buyers eyeballing better fuel economy without sacrificing ride quality.

Our limited turns behind the wheel of a Hybrid Touring model—the top trim—largely confirmed that suspicion. Although the battery operation was (fairly) seamless, the Accord Hybrid rode and drove like a typical Accord sedan. For the first time in the Accord’s history, top trims are fitted with adjustable dampers that can be set to normal or sport to firm the ride and throttle response.

ALSO SEE: Honda CR-V Hybrid displayed in Frankfurt; US likely next, but when?

The overall feeling was confident and composed—albeit in very short, 6-mile increments. Honda says the new Accord is stiffer and stronger than the outgoing model, thanks to more extensive use of higher strength steel in the inner frame and overall structure.

One interesting note: Instead of shift paddles found in other Accord models equipped with an automatic transmission, Accord Hybrid uses the paddles to control regen effort in varying levels.

Toggling between the four settings, with increasing levels of regen braking in each, the Accord Hybrid never approaches true, one-pedal operation—it’s far subtler than that.

We found that leaving the paddles alone was good enough for normal operation, although during long downhill stretches, the paddles could be useful. And that may be the point.

Although the third-generation Accord Hybrid is new for Honda, its similarities to the gasoline-powered Accord mean that it will likely blend into the rest of the lineup—its only secret is better fuel economy.