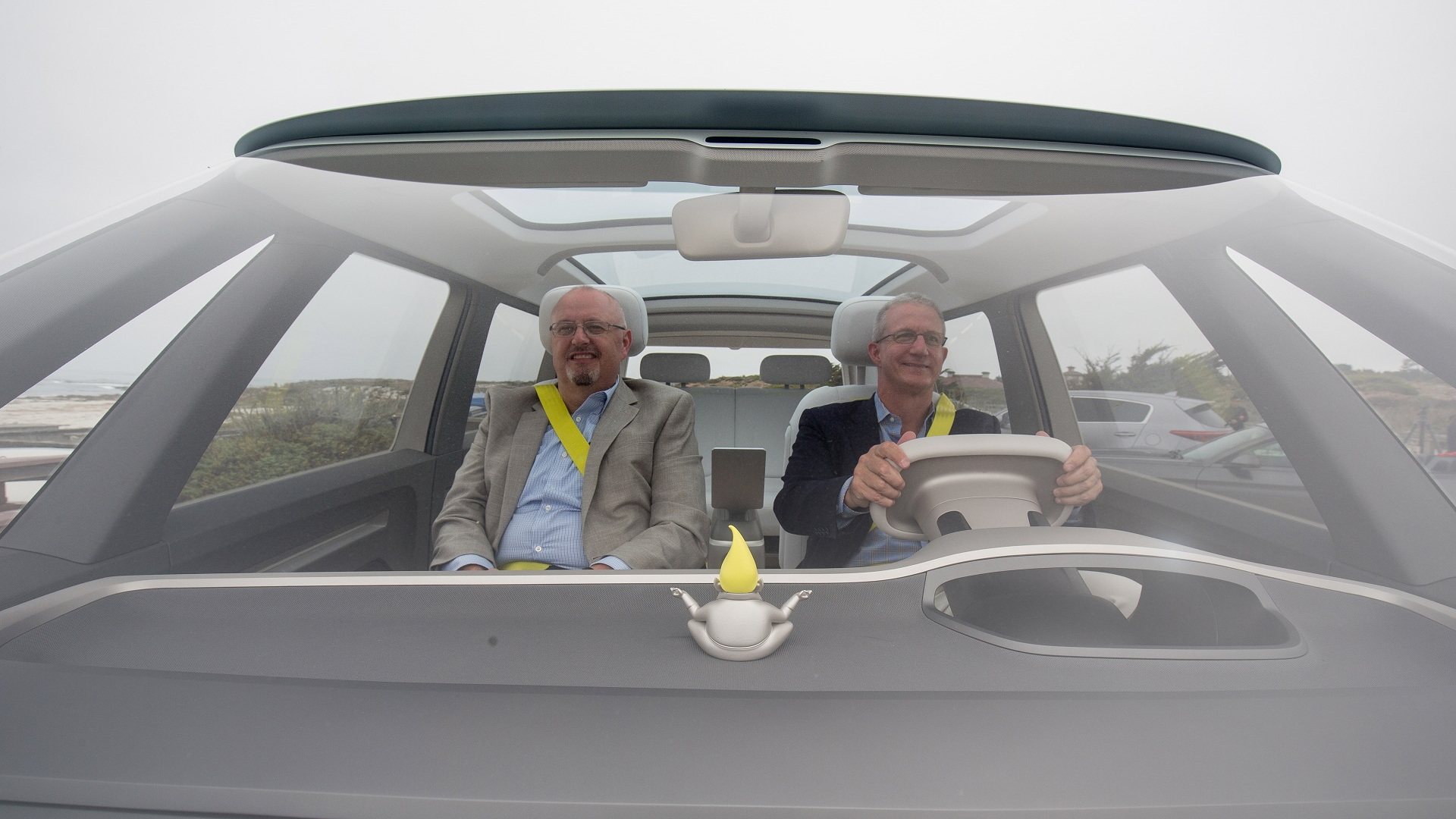 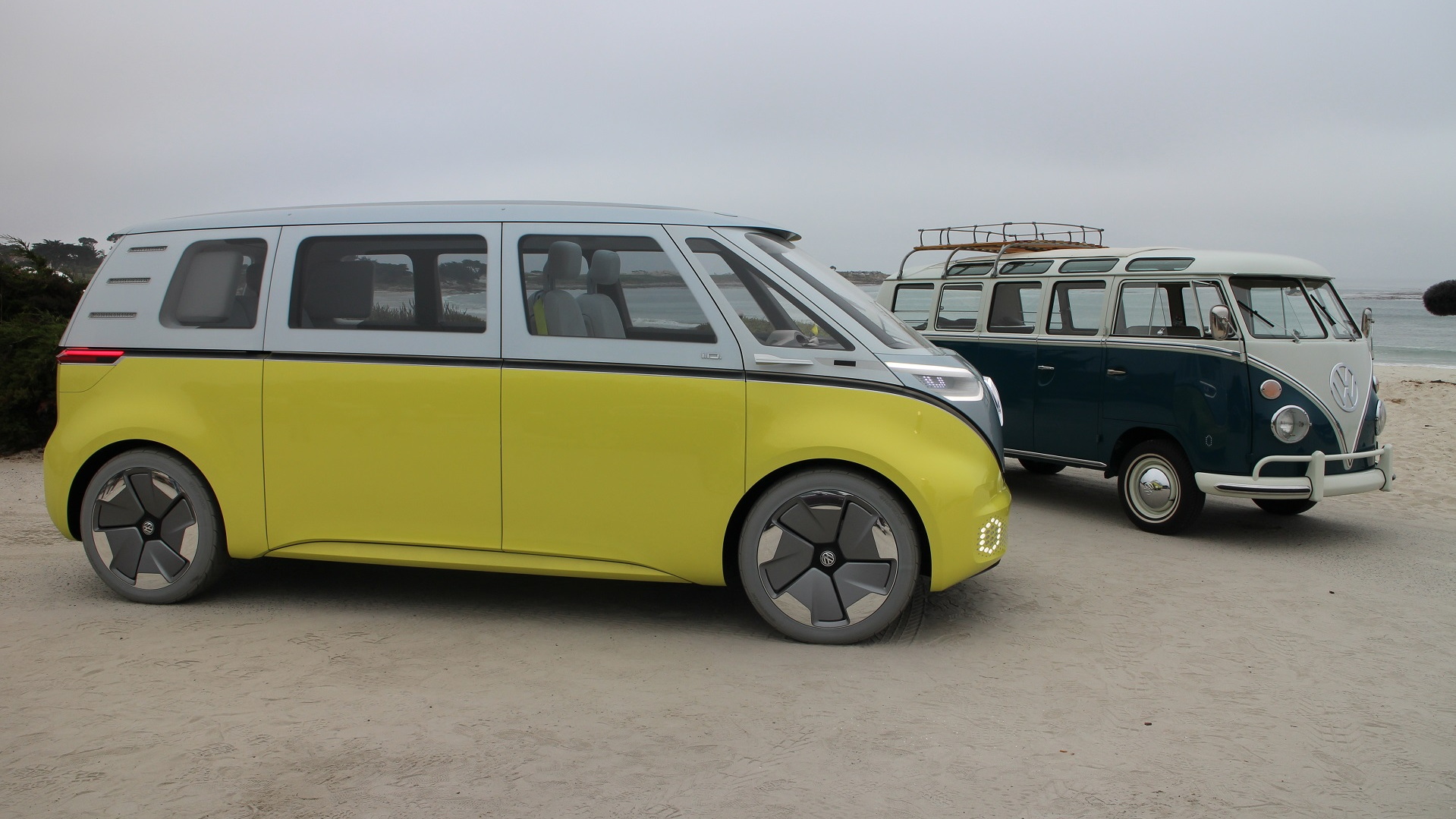 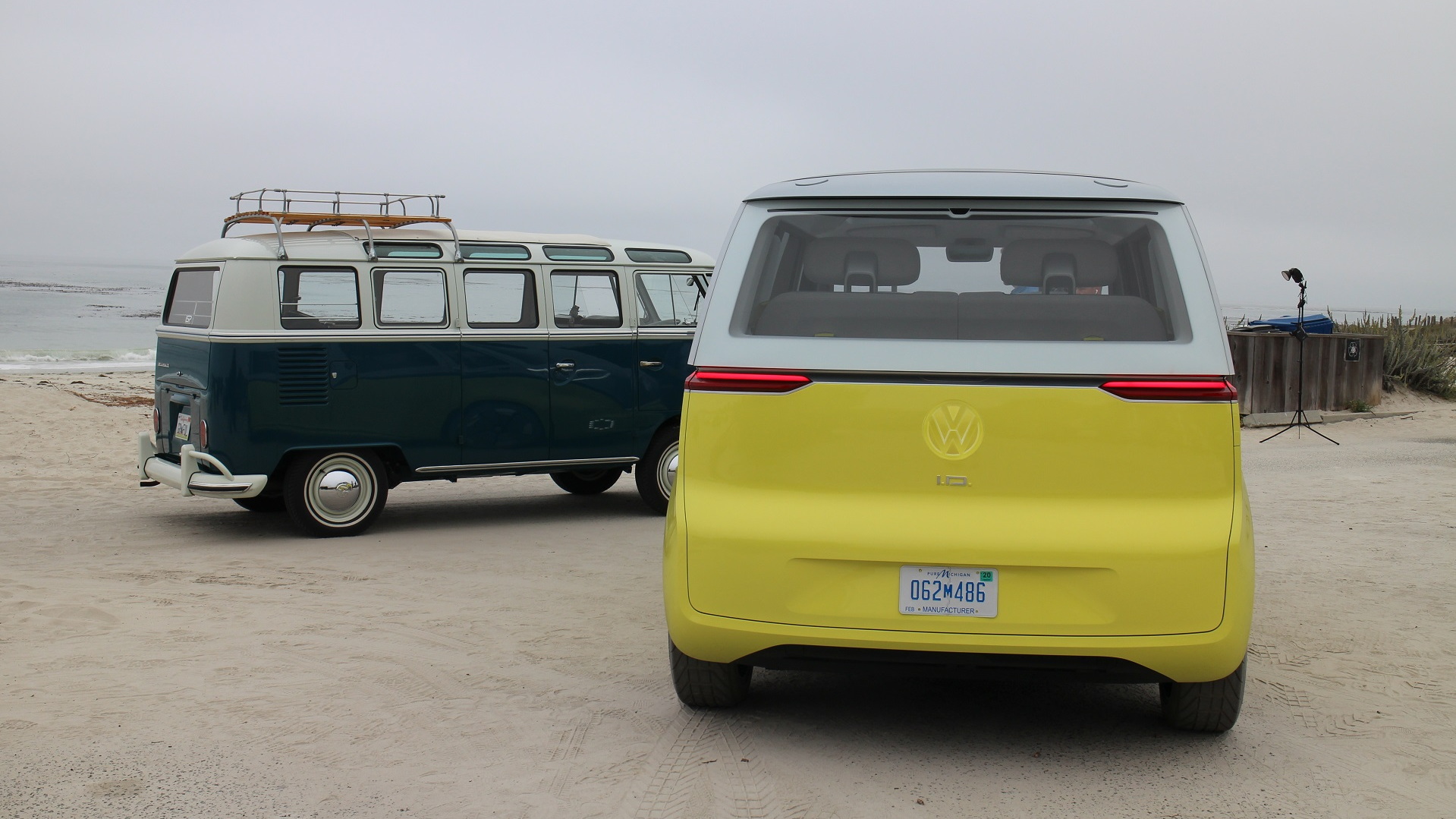 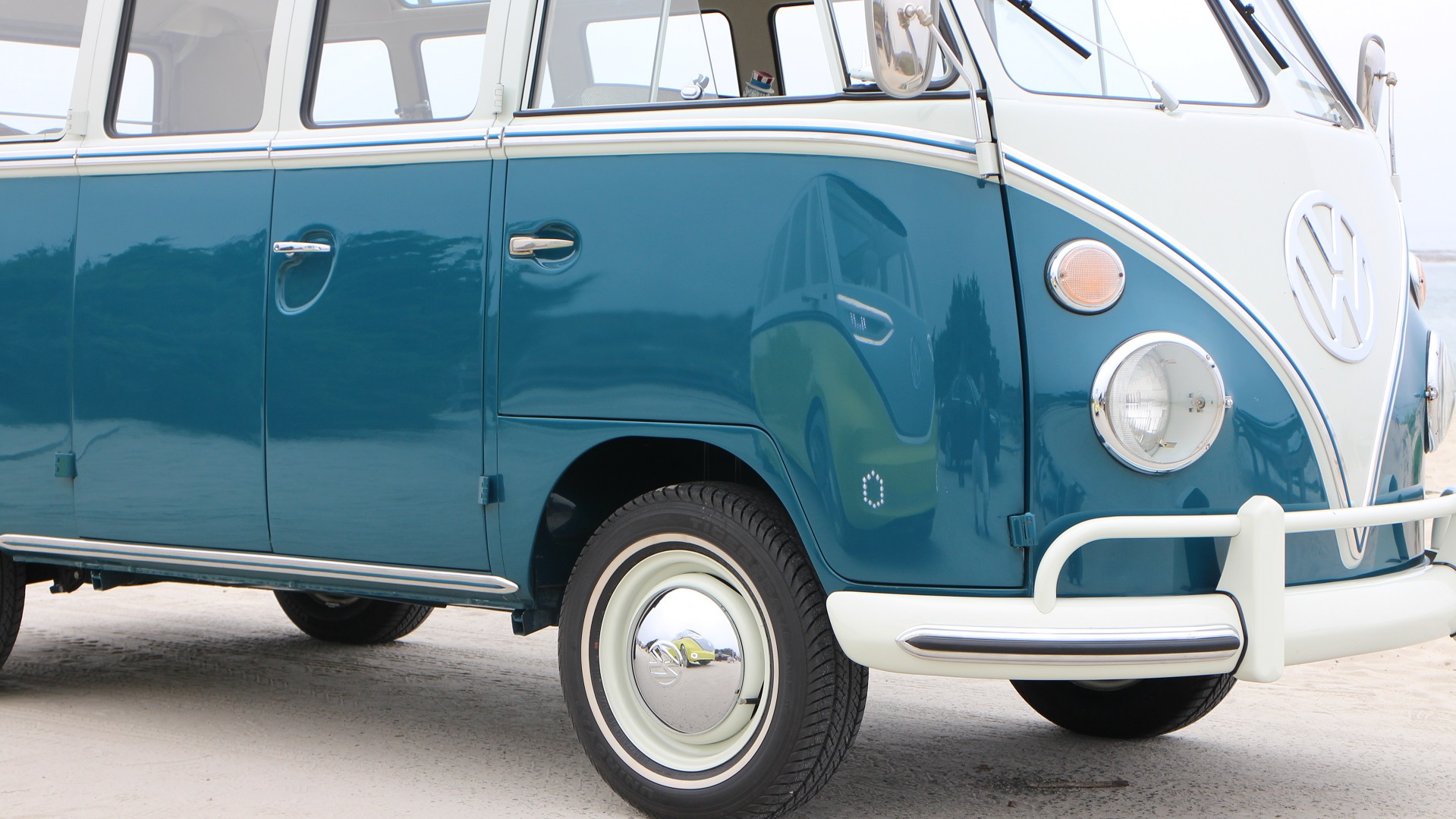 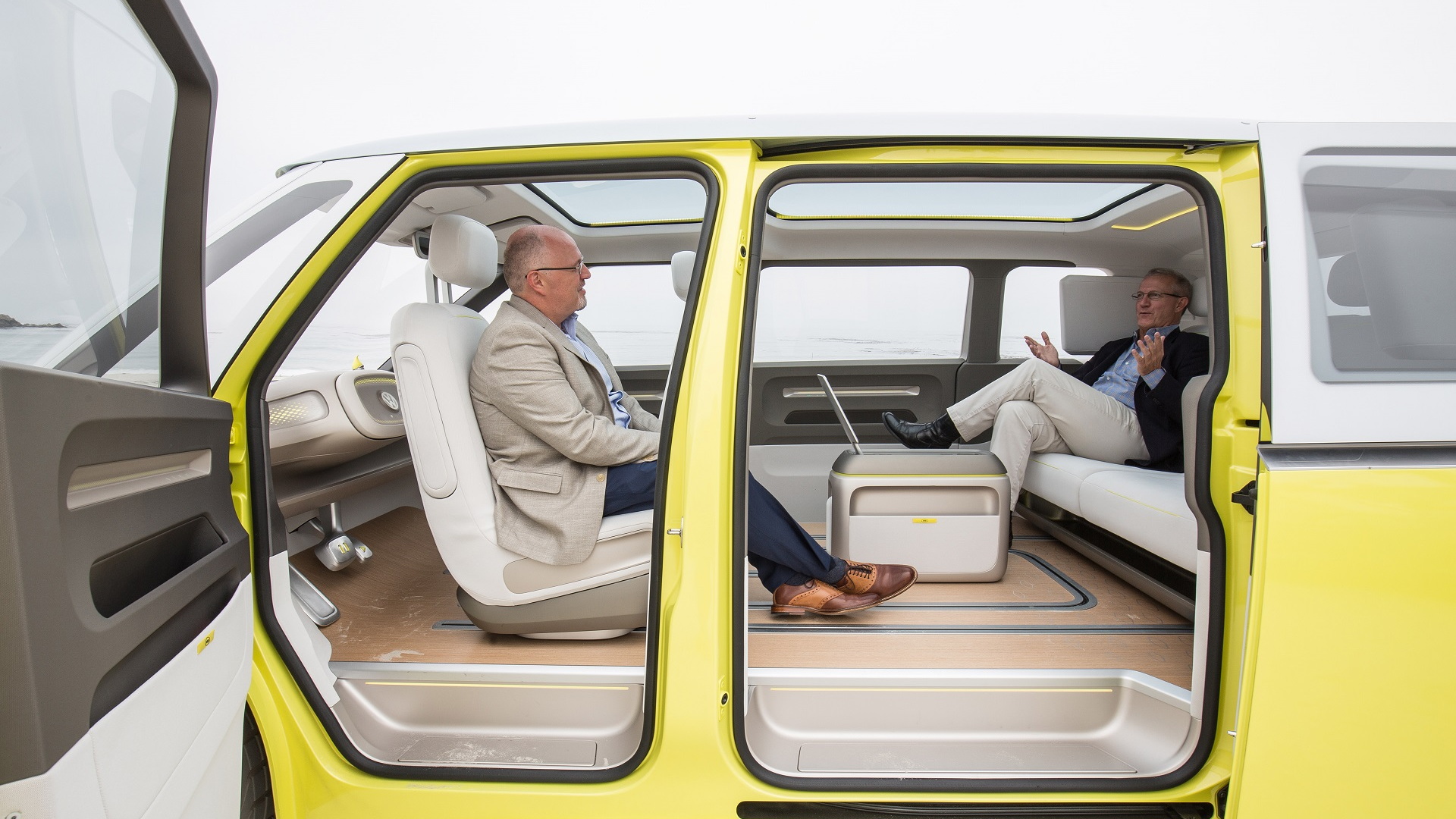 When you see a concept car drive onto the stage at an auto show, don't be fooled into thinking it's what you'll drive out of the dealer a couple of years later.

We got to drive the Volkswagen ID Buzz all-electric Microbus concept car Saturday for a couple of miles along the oceanside road outside Monterey, California.

Our drive in the ID Buzz concept was powered by a battery pack and single electric motor from the current Volkswagen e-Golf, and the vehicle was firmly limited to 25 mph.

That's because its custom-fabricated, pale gray Hankook tires aren't intended for highway use, nor was the rest of the very carefully hand-built prototype.

And one result of it being a prototype is that it was stiffly sprung, with fairly abrupt brakes, numerous creaks and groans, and a complete lack of regenerative braking.

None of which mattered in the slightest.

We took away two impressions from our time with the ID Buzz concept.

First, it's just incredibly spacious inside for a 16-foot-long vehicle destined to be built on VW's future MEB electric-car architecture, whose first use will be in a compact five-door hatchback coming in 2020.

Second, the thing is just amazingly, astoundingly popular, gathering crowds and random passers-by who stopped to snap photos and followed the vehicle into the hidden, secluded coastal parking lot where it was being photographed.

READ THIS: VW Bus Hybrid That Never Was: The Microbus Prototype Of 1977

Volkswagen cleverly hired a fleet of historic split-window Microbuses, from 1967 and earlier, to ferry executives and journalists around Monterey during the weekend leading up to the Pebble Beach Concours d'Elegance.

The allure of the old Microbuses, and the new ID Buzz on test drives along the beachfront road, was immediately evident through the weekend.

Passers-by spun around to watch as soon as they heard the distinctive air-cooled engine sound, giving us the thumbs-up, taking quick cellphone pictures and selfies whenever the old Microbuses parked or stopped in traffic.

On a weekend where rare and valuable cars from around the world can be seen on the streets, the old Microbuses attracted as much or more attention as the rarest, fastest, priciest hypercars or unique coachbuilt 1930s classics.

As one passenger put it: "There's nothing like getting a thumbs-up from a Lamborghini driver's passenger when you're in a 50-year-old VW bus with the windshield open for flowthrough ventilation!"

The reception for the bright yellow-and-white ID Buzz concept, with its white LED lighting and big illuminated VW badge on the front, was equally excited.

Unveiled to a near-rapturous level of public interest and critical acclaim at January's Detroit auto show, echoed in the spring at the Geneva auto show, VW announced today that the electric Volkswagen bus will reach showrooms in 2022.

Like the original, there will be various commercial versions too, likely including a panel van, two-seat cargo versions, and perhaps even a modern interpretation of the drop-side pickup truck.

After many tries at creating a new VW bus concept, dating back to 2002, it turned out that it requires an electric powertrain for designers to make a one-box shape that's an appropriate echo of the original VW bus. The ID Buzz may benefit from a tighter, stiffer front structure to absorb front crashes than a internal-combustion bus ever could have.

The specs of the Volkswagen ID Buzz say it has a 110-kilowatt-hour lithium-ion battery pack in the floor, one 150-kilowatt motor on each axle, and a projected range of 200 to 300 miles.

Our concept car had none of that, but its spacious passenger compartment did allow the front seats to be rotated to create a "lounge" environment.

At that point, the steering wheel retracted in anticipation of future self-driving capabilities, perhaps by 2025 or so, that would allow the car to drive autonomously in some circumstances while occupants chatted. (Or, perhaps more likely, looked at mobile devices and ignored each other?)

But hopping back into a 21-window 1964 Volkswagen Microbus at the end of our drive, our prime takeaway was that VW has the ability to create a unique electric car.

Not only could it offer enormous practicality, with seats for up to eight and autonomous zero-emission driving, but it will stand out decisively from a slew of me-too electric hatchbacks and sedans.

The only question is how VW could bring it to market, oh, two or three years earlier.