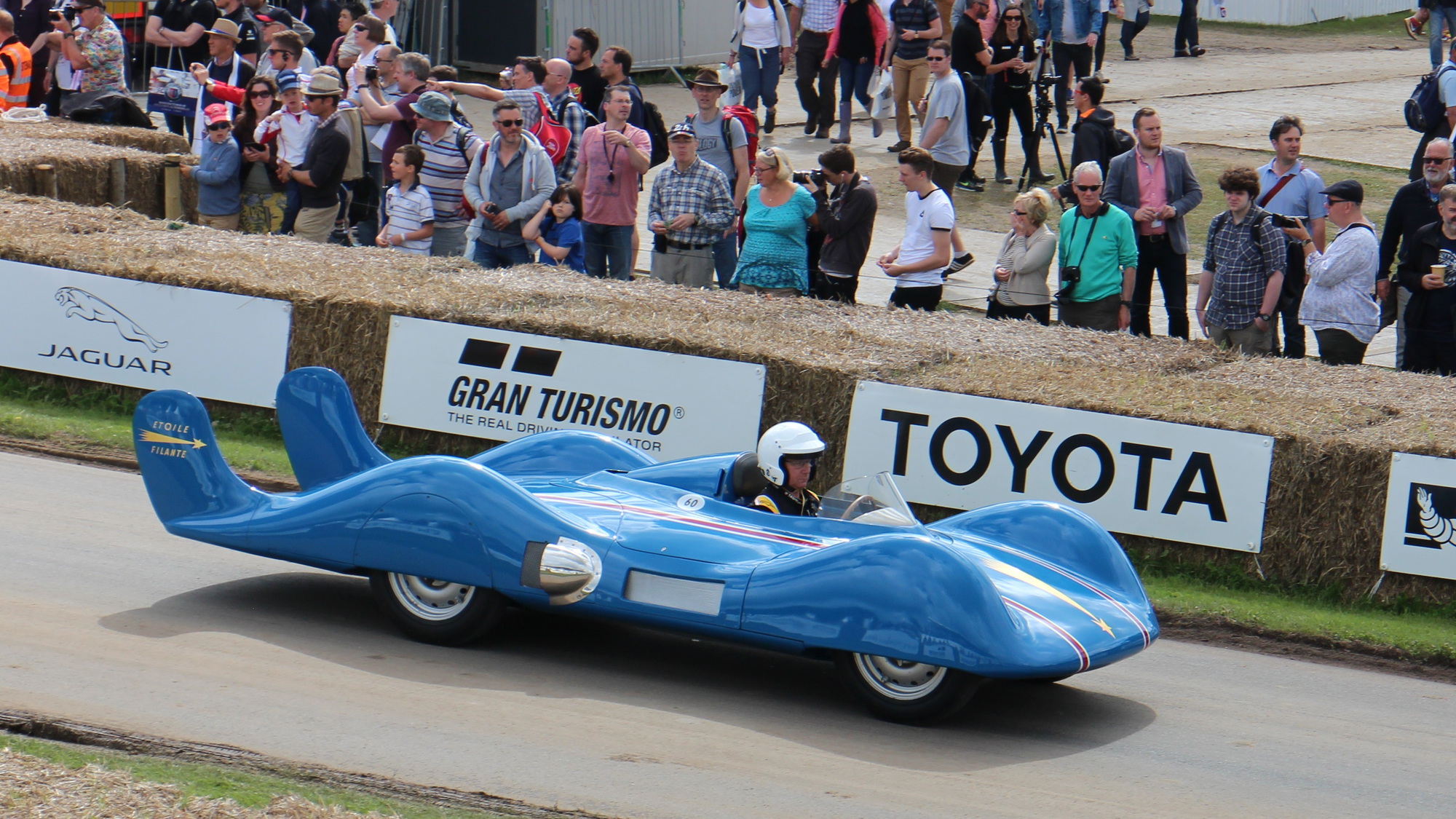 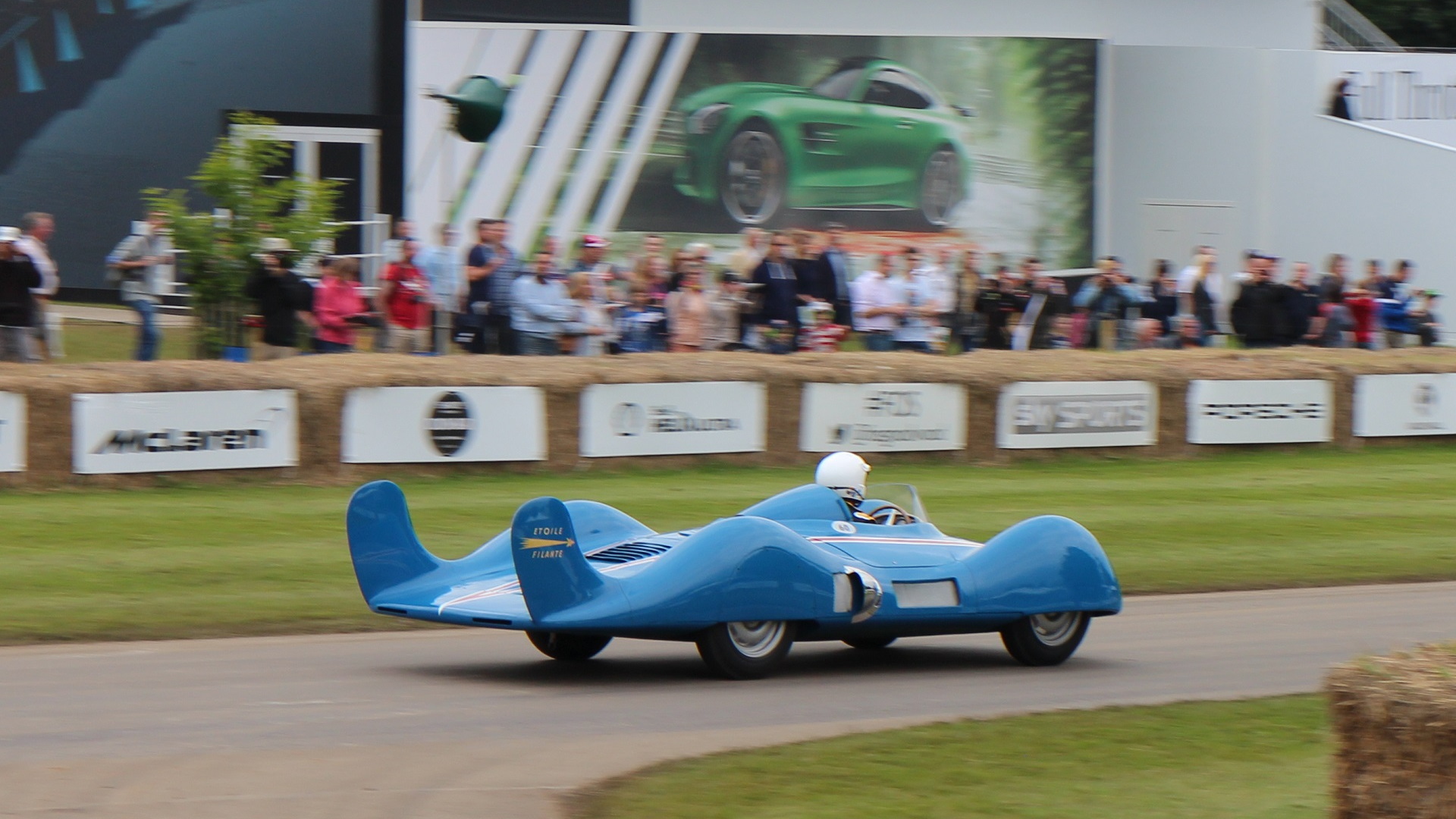 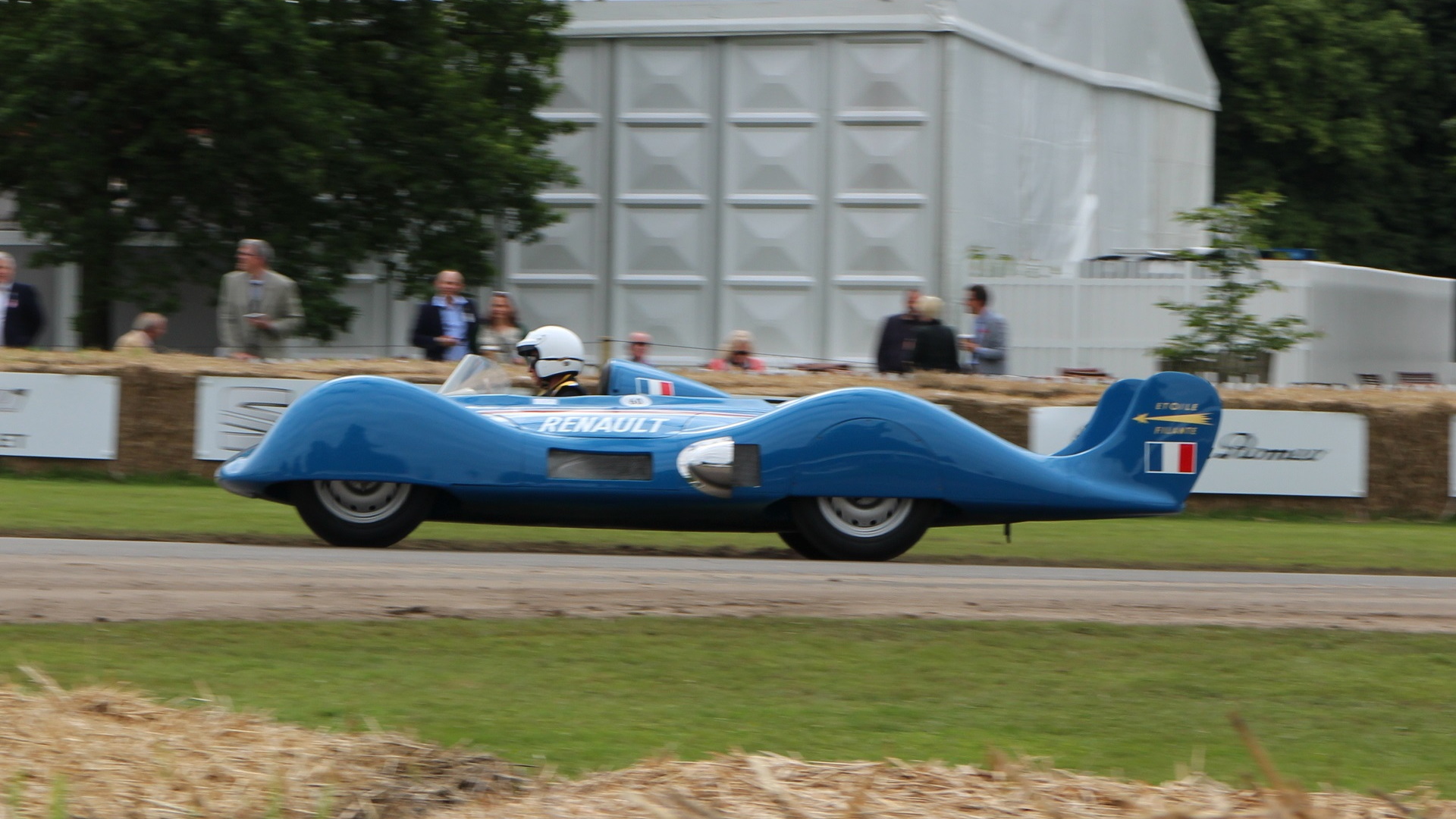 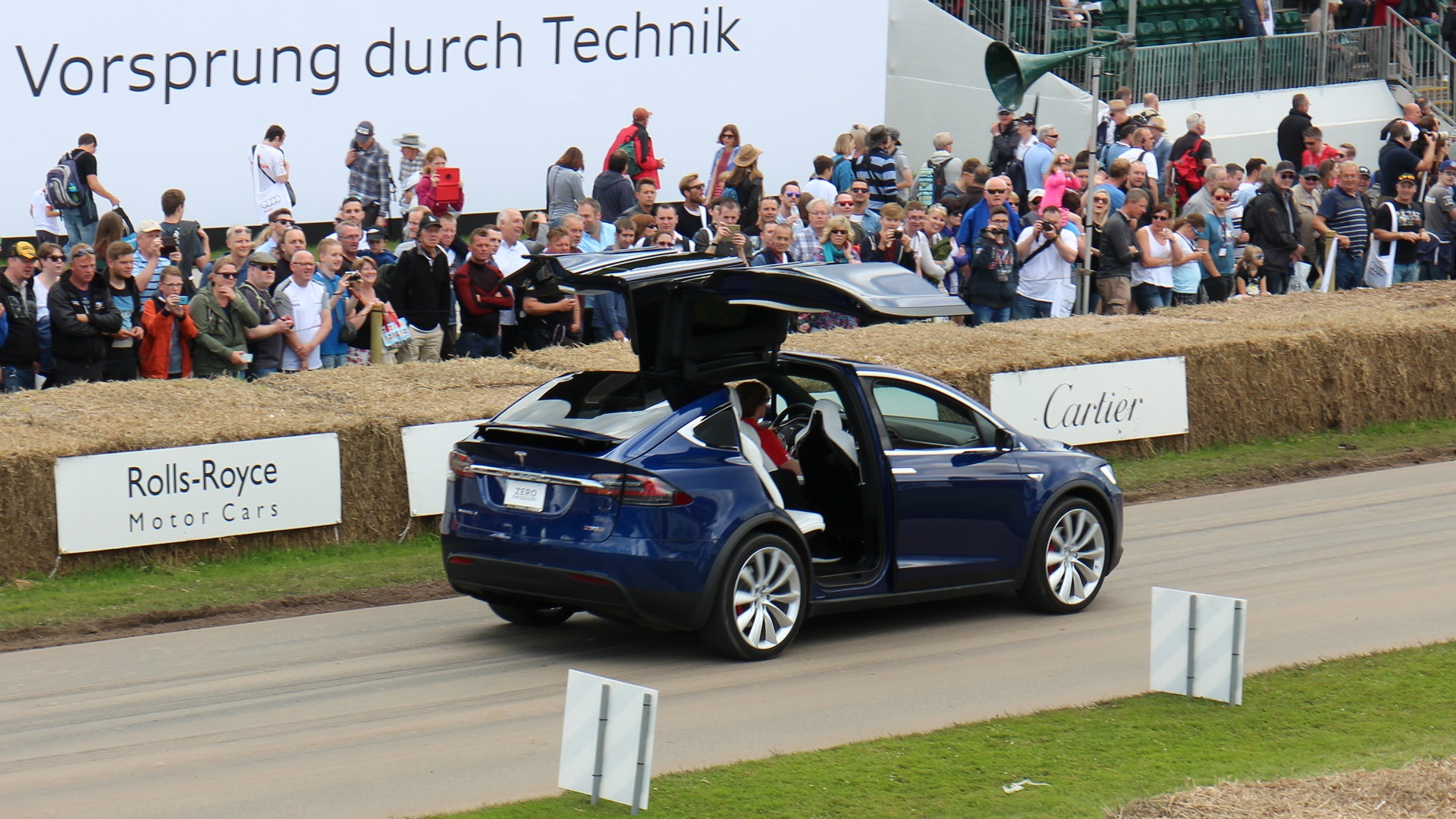 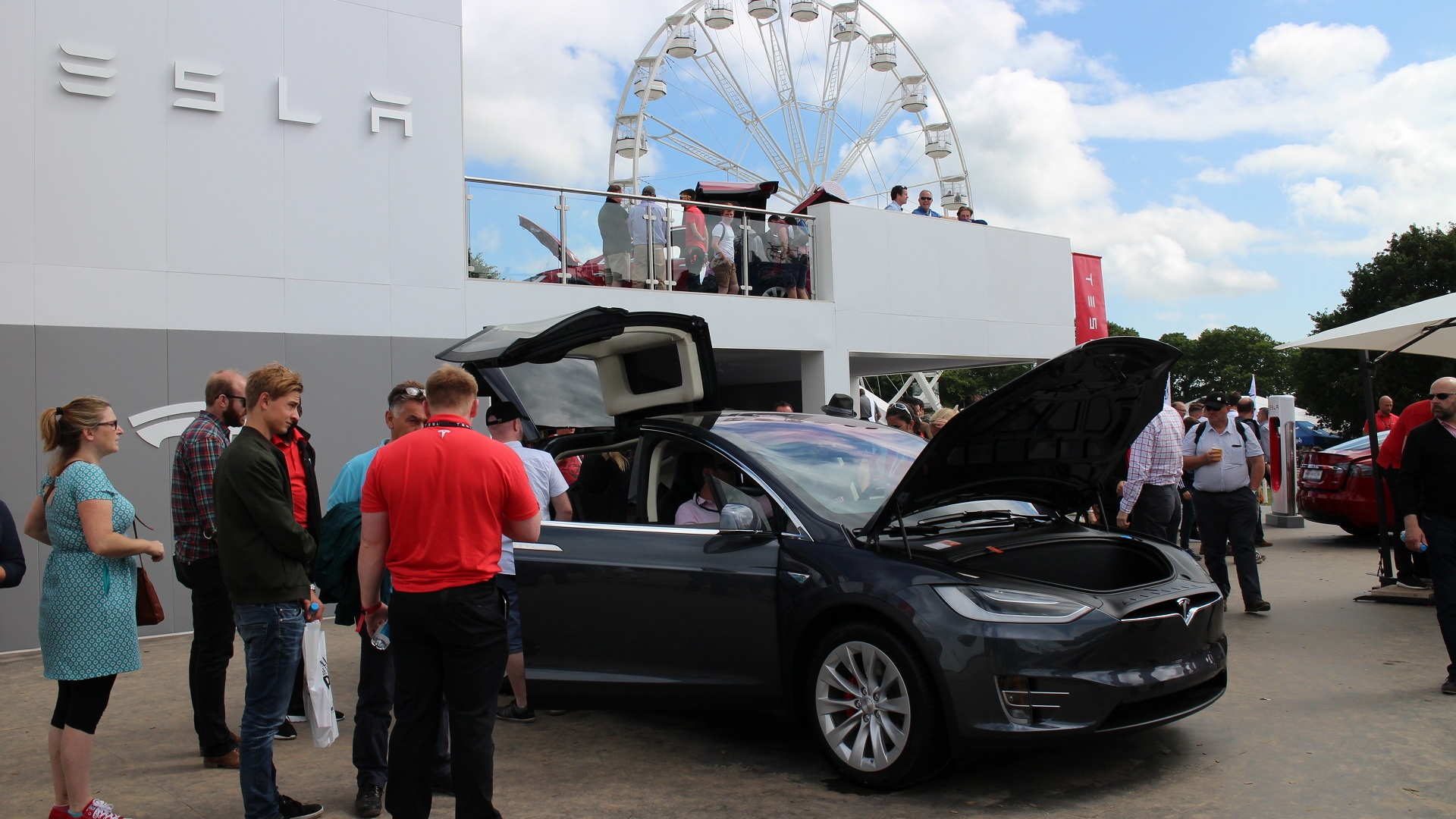 It's a unique event on the motoring calendar, a bucket-list item for many attendees, and a wonderful mix of fast cars spanning 110 years, priceless classics, and often quite a lot of mud.

The Goodwood Festival of Speed, which took place last weekend, brings a truly staggering variety of historic and modern cars to compete against each other.

It even had a few green cars, of sorts, which joined the splendid array of vehicles that sprinted up the hill, one by one, to be timed over the 1.1-mile course.

Perhaps the most striking was a car few attendees had ever seen, the 1956 Renault Etoile Filante ("shooting star") land-speed record car.

It's only theoretically a green car—and painted French blue, naturally—but its experimental 270-horsepower turbine powerplant is housed inside a tubular frame covered in a polyester-clad shape that resulted from two years of wind-tunnel testing, according to Renault.

At Goodwood, it whooshed silently up the track, usually trailing two older and much noisier historic Renault racers.

Even quieter was the Tesla Model X P90D all-electric luxury crossover utility vehicle, which took several turns running up the hill amidst a line of cars up to 110 years older.

Its drivers invariably made the slower return trip down the hill with both falcon doors open, entrancing half the crowd and leading the other half to mutter, "Hmmph, bit flash, isn't it?"

The Tesla booth set up amidst other luxury vendors attracted a steady crowd. While its Model X was a very early left-hand-drive model, it offered several of the latest Model S versions in right-hand drive as well.

It might have been ignored entirely but for its chrome-covered body; the crowd mostly reacted with silence and puzzlement.

It was followed in due course by the little RiverSimple Rasa hydrogen fuel-cell prototype, possibly the smallest car up the hill all day.

It too was silent, though in a crowd of historic-vehicle fans and performance-car junkies, it generated more quizzical looks than anything else.

Other noteworthy (and entirely non-green) vehicles at the event included the gigantic "Beast of Turin," a re-creation of the 28-liter four-cylinder 1911 Fiat that set a Land Speed Record.

Just a few cars back was the brand-new Bugatti Chiron supercar prototype, driven up the hill at one point by no less a personage than Lord March himself, the owner of the Goodwood estate and grounds.

Then there was the enormous Kamaz Dakar Rally all-wheel-drive truck, whose Russian driver—widely acknowledged as crazy, in admiring tones—showed that you can actually drift a 10-ton vehicle.

For such an august location, it seemed only fitting that the course support vehicles (provided by their makers) included both a handful of Mercedes-AMG GTs and even a Rolls-Royce Ghost Black Badge.

Bugatti Chiron at the 2016 Goodwood Festival of Speed

It's just that kind of event.