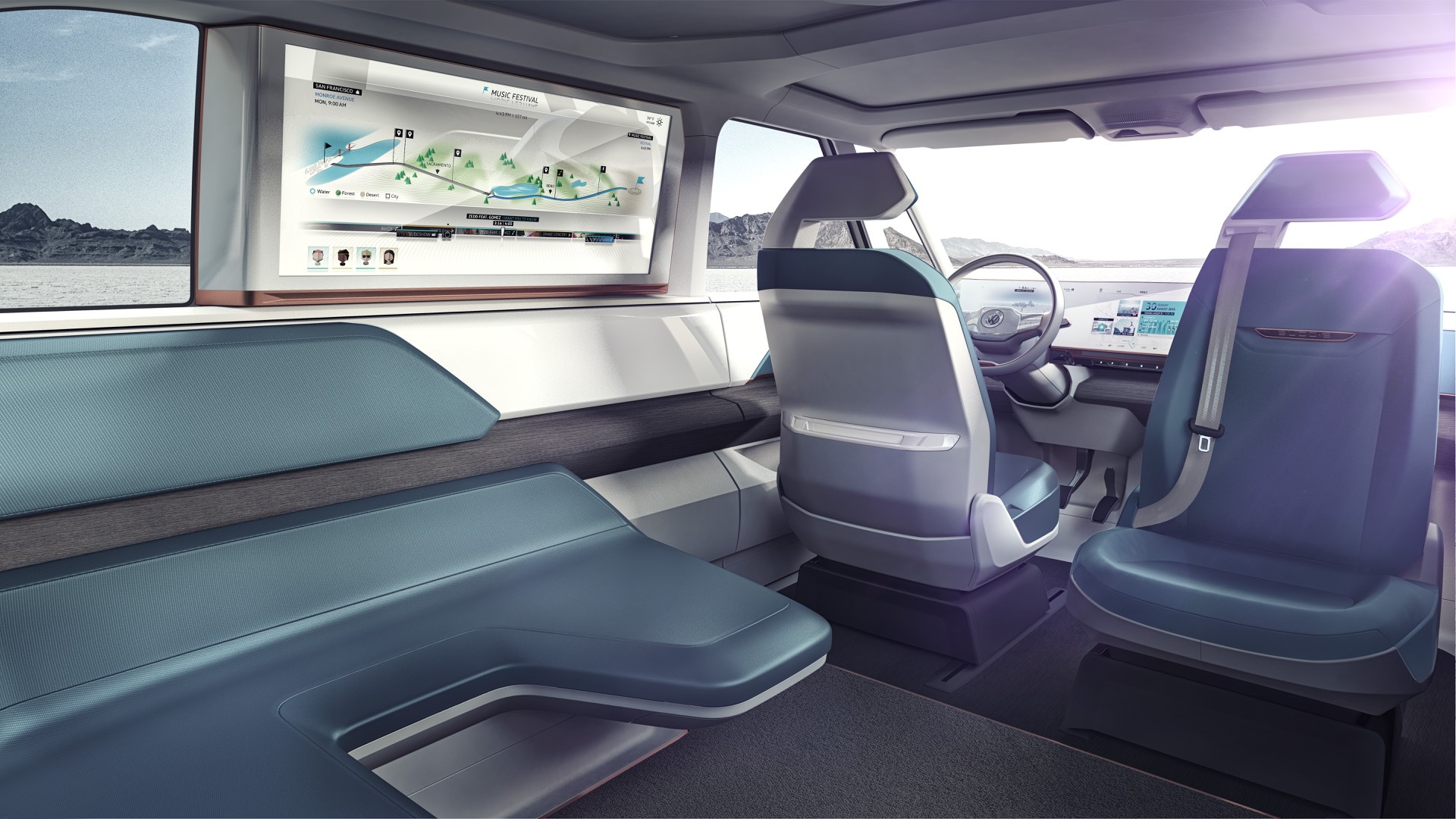 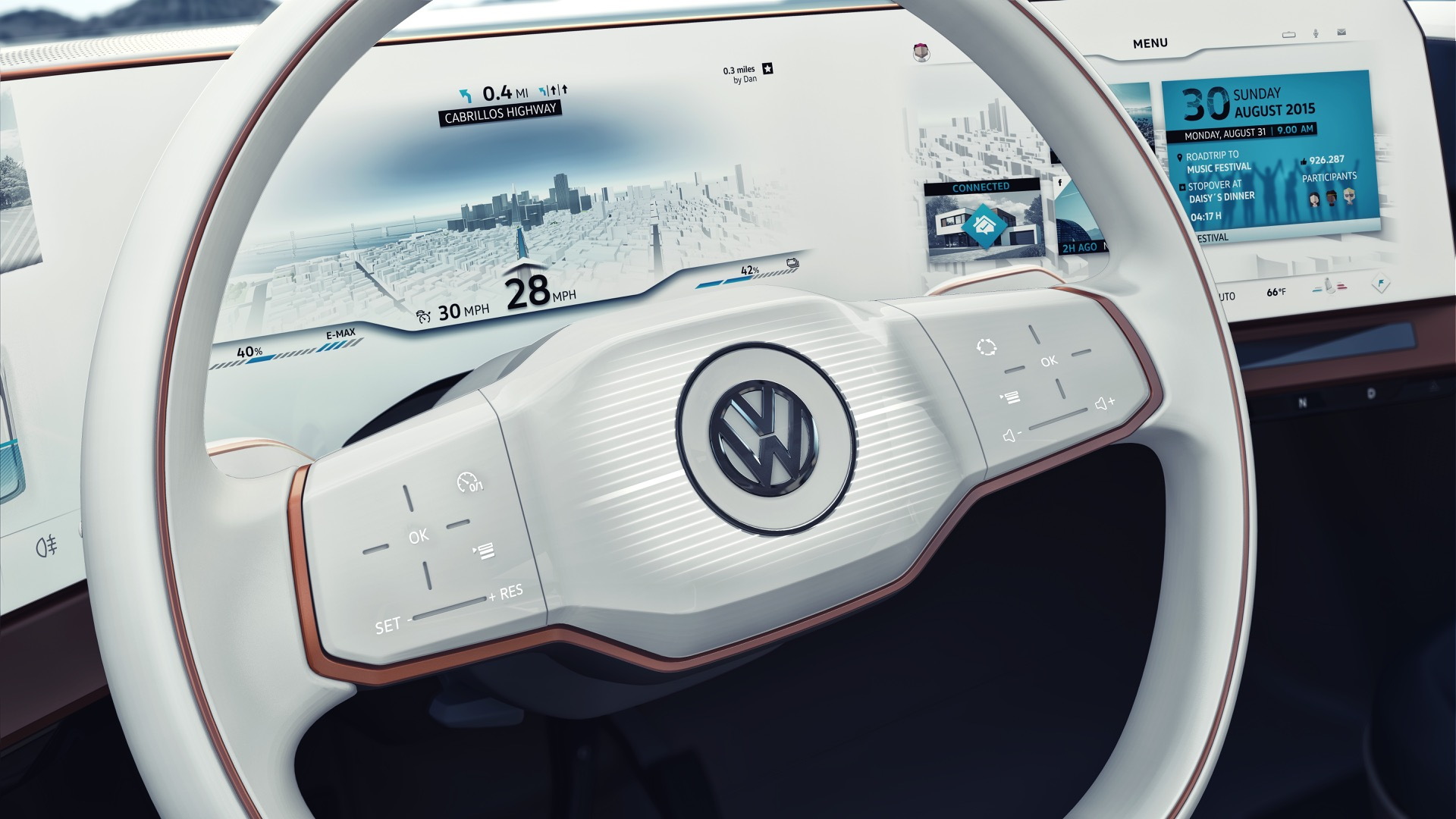 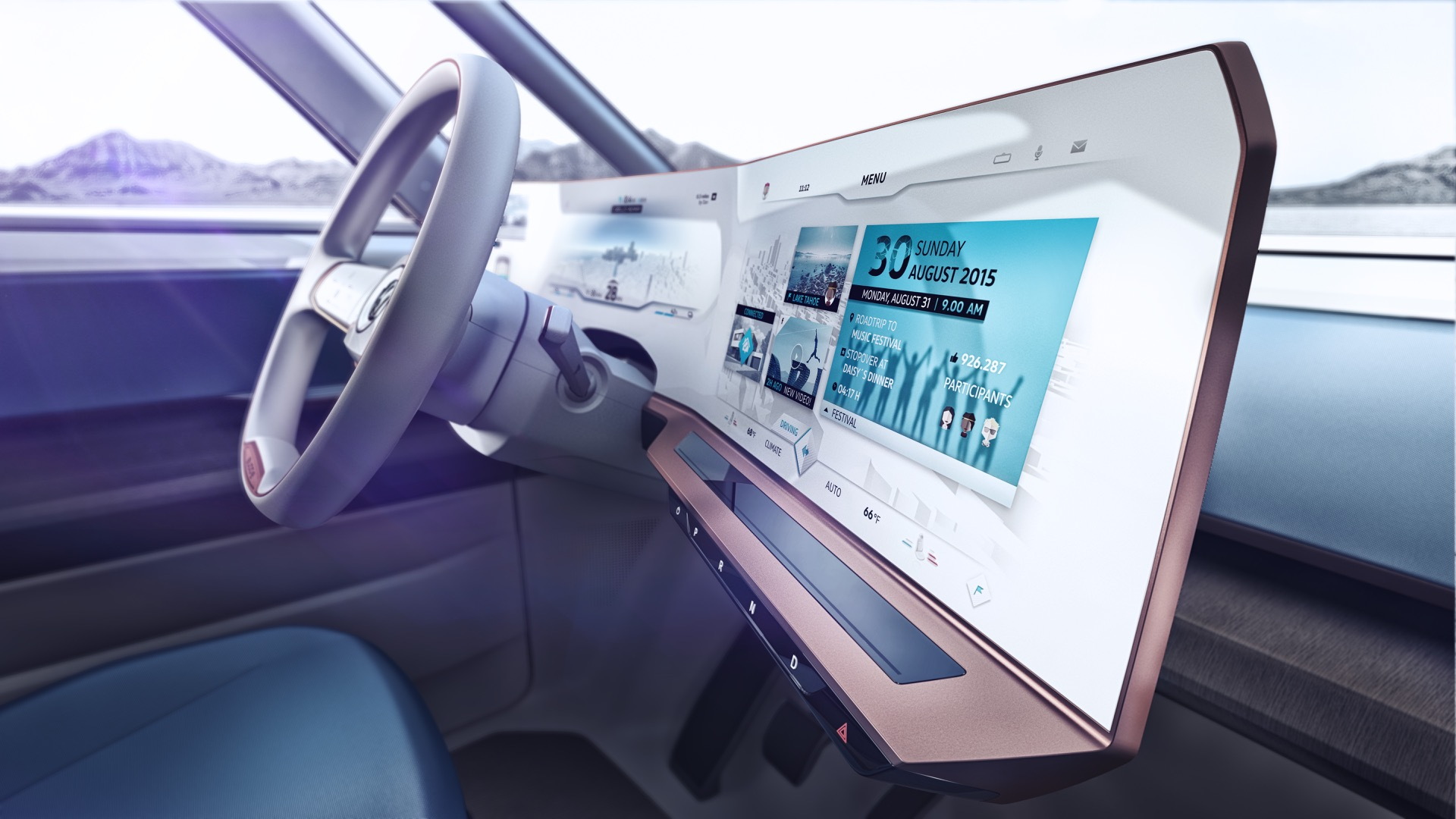 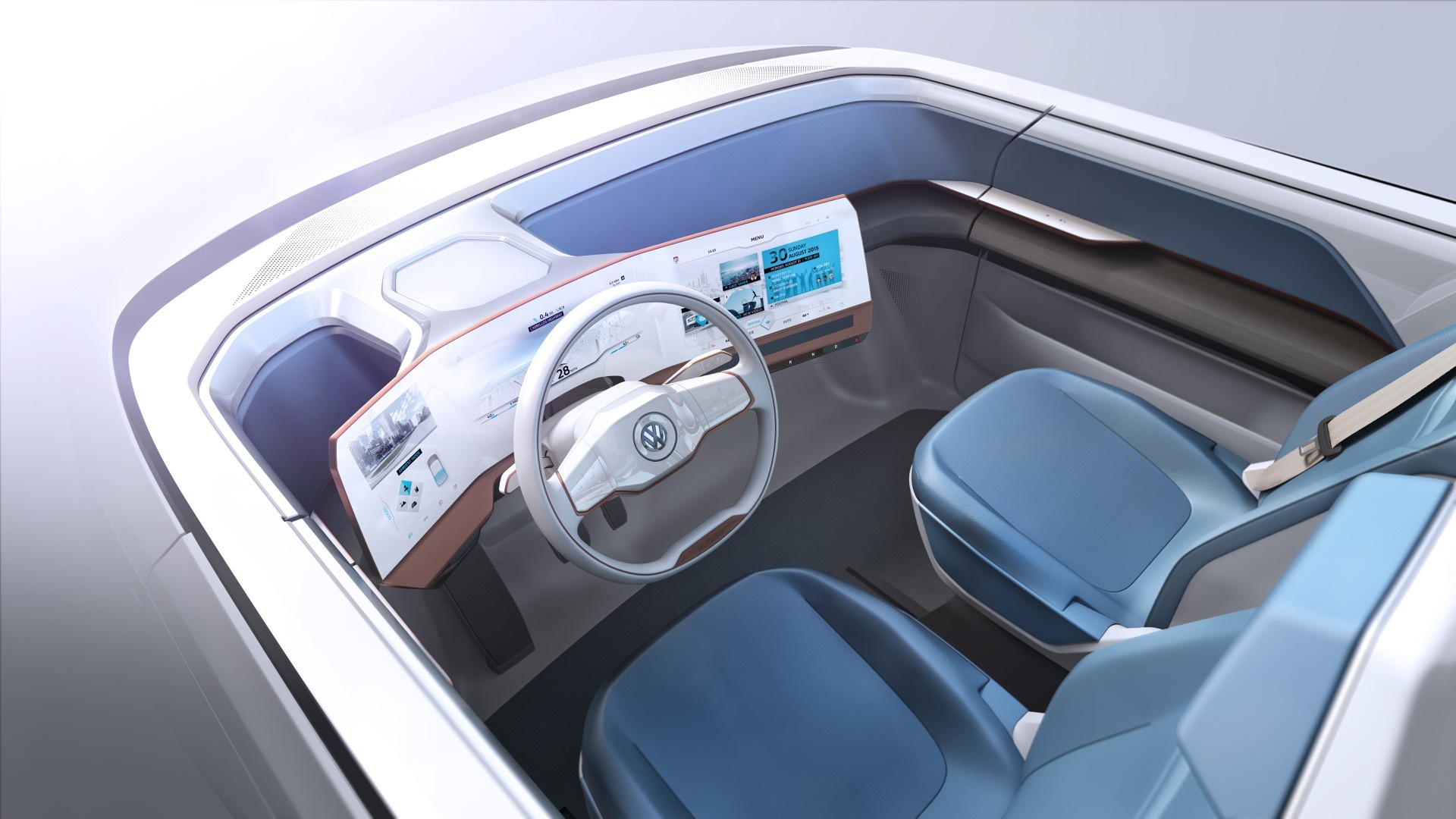 The Volkswagen Budd-e Concept that was revealed at CES this week marks several firsts. While there are some radically different design and interface approaches (like expanded gesture controls), several of the most important firsts in the Budd-e concern what’s claimed underneath: an all-new EV-specific platform, as well as a new battery architecture—both of which are anticipated in a long-driving-range pure-electric production vehicle by the end of the decade.

The automaker, still facing various penalties for its ongoing diesel emissions scandal, is looking to a future with much more of an emphasis on electric vehicles.

For the automaker’s new modular electric toolkit (MEB) architecture, VW aims to provide space-efficient flexibility for a wide range of battery sizes, a lightweight body structure, and modular construction. And the platform will be able to accommodate vehicles ranging in size from the smallest minicars to what would be considered mid-size in the U.S.

The Budd-e lands somewhere in between. At about 181 inches long, it’s about the overall size of the now-discontinued Mazda5—with the same parking footprint as American compact sedans and crossovers. And at least in concept form, it’s supposedly equipped with a 101-kWh battery pack that can provide 233 miles of U.S. driving range.

The 101-kWh battery, and the means to get there: It’s not vaporware

Dr. Volkmar Tanneberger, Volkswagen’s global head of electric and electronic development, confirmed to us that the 101-kWh pack exists, but only in “pre-development” form.

“We have a huge cell lab in Wolfsburg,” he added. “They have different cell types under test; at this time they are testing 37 amp-hour cells that are very close to production.” 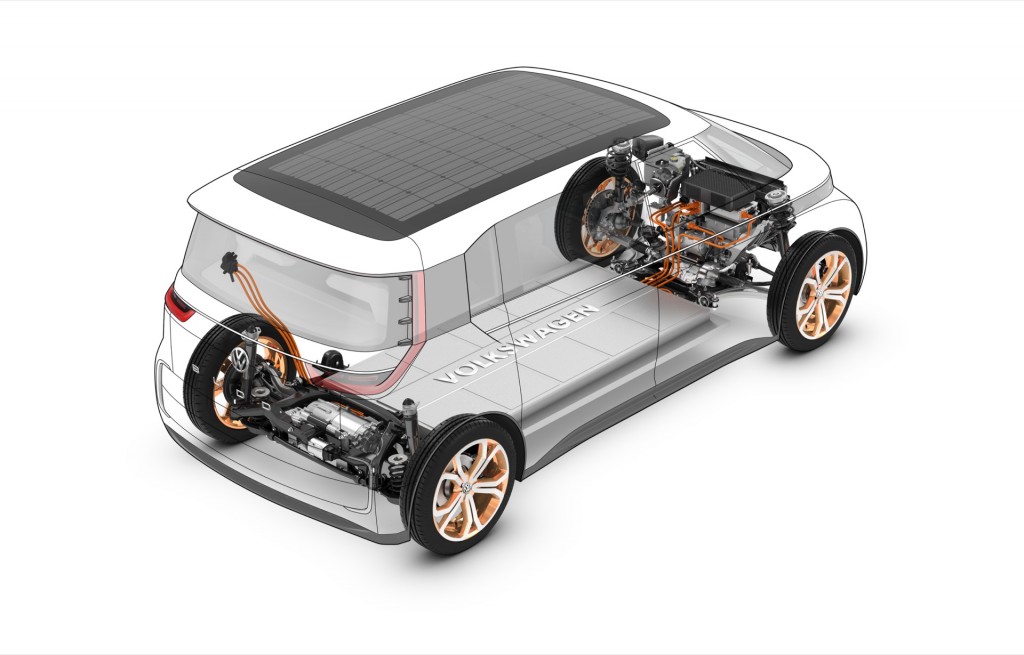 The cells in the pre-development pack are of the automotive-standardized PHEV2 type. But according to Tanneberger, the second-generation battery architecture will include the capability for the 18650 format used by Tesla (long cylindrical cells, sized 18.6 mm by 65.2 mm), as well as pouch cells and prismatic cells. It’s designed to cover all three technologies without compromises in packaging, he emphasized.

“So we are open...We want to go with the technology that offers the best range, the best performance of the battery,” he said. “But today we are focused on prismatic and pouch.”

Tanneberger also said that while VW is at this time focusing on 37 amp-hour battery technology, the company has 60 amp-hour ones in development—although testing those batteries for safety on a module and system level will take some time.

The chemistry is not set either. “We want to be open, if someone with cylindrical cells—laptop, for example—brings out a new technology, we want to be able to bring out that technology if there is an advantage for our cars,” he said.

The format is established however—with up to 14 cells to a battery module, including the cells plus the cell-controlling electronics. VW’s term for the new format is “chocolate batteries,” said Tanneberger, because those battery modules are connected and stacked in different rows and columns (all underfloor) to suit the size of the vehicle and capacity demands.

Looking to market forces for the batteries

Tanneberger wouldn’t rule out the possibility of VW assembling cells on its own in the future. “If MEB becomes a successful platform, maybe it might make sense,” he explained. “But for today’s cars and the next years of cars we will cooperate with the battery suppliers.” 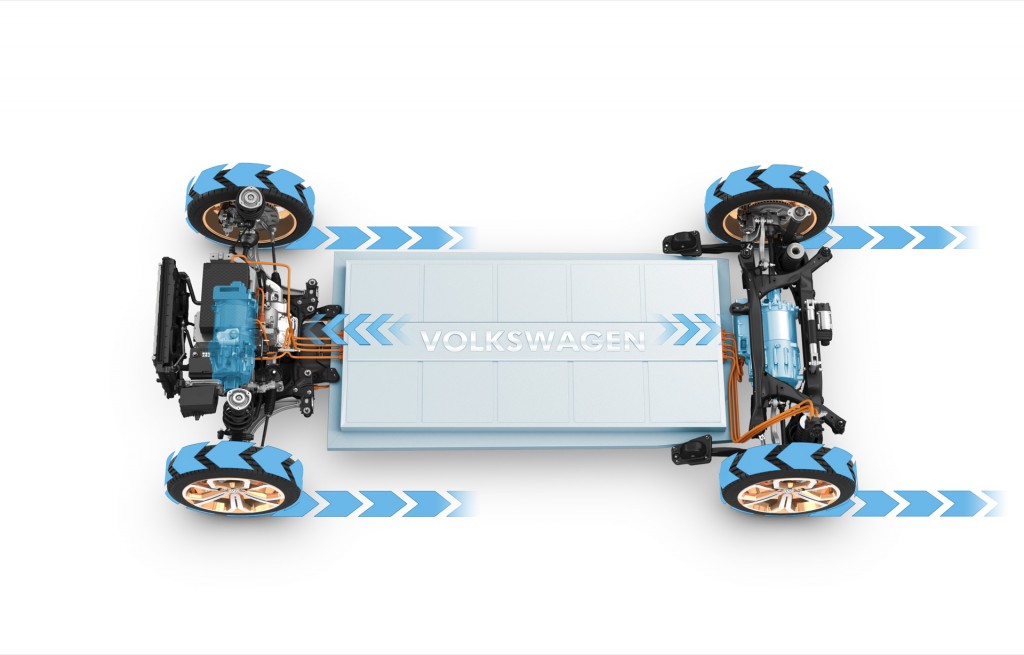 But he confirmed that electric motors (in the Budd-e, one for the front wheels and another for the rear wheels) will definitely be produced by VW itself. Even faster 800V CCS fast-charging is also a serious possibility, allowing that large proposed battery pack 30-minute charges to 80-percent capacity.

Yet Tanneberger downplayed inductive charging, which Nissan is still considering viable and potentially offering in a next-generation Leaf—as a technology for longer-range EVs in the near future.

“I don’t think that we will find the technology support in quick-charging inductive technology due to the legal requirements—with magnetic field strength—so I think if you run really quick charging you have to stick with conductive charging,” he said.