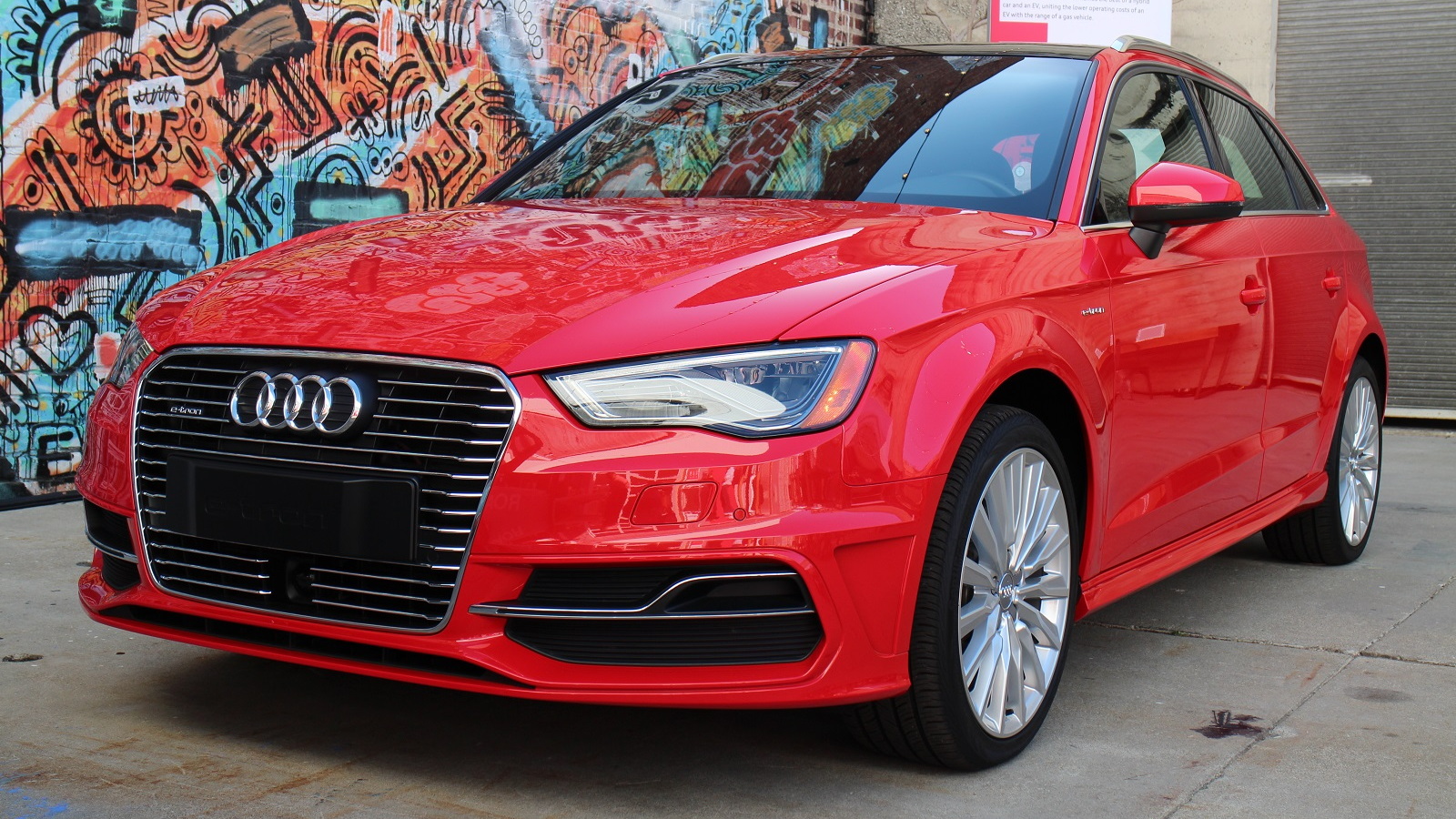 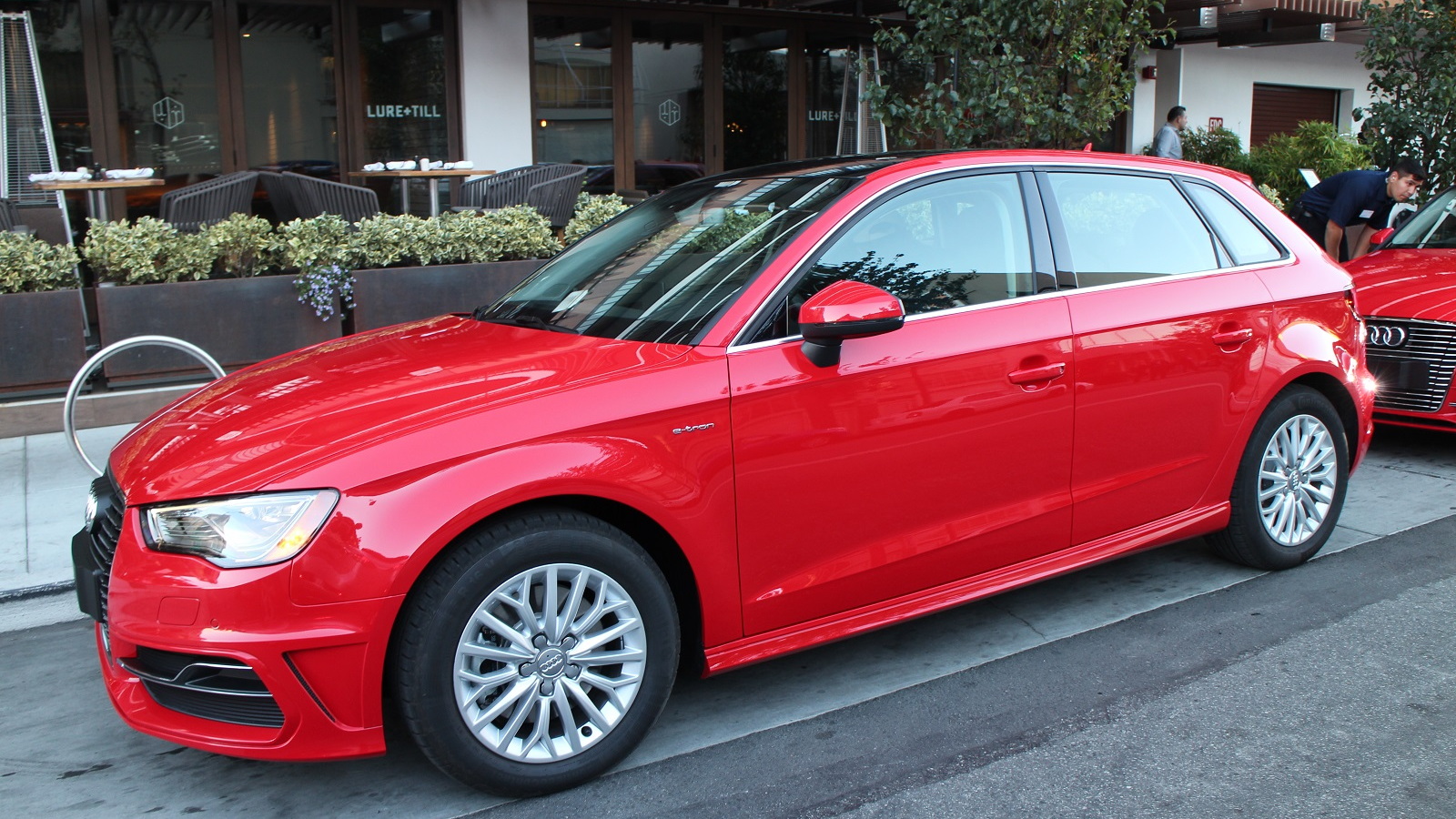 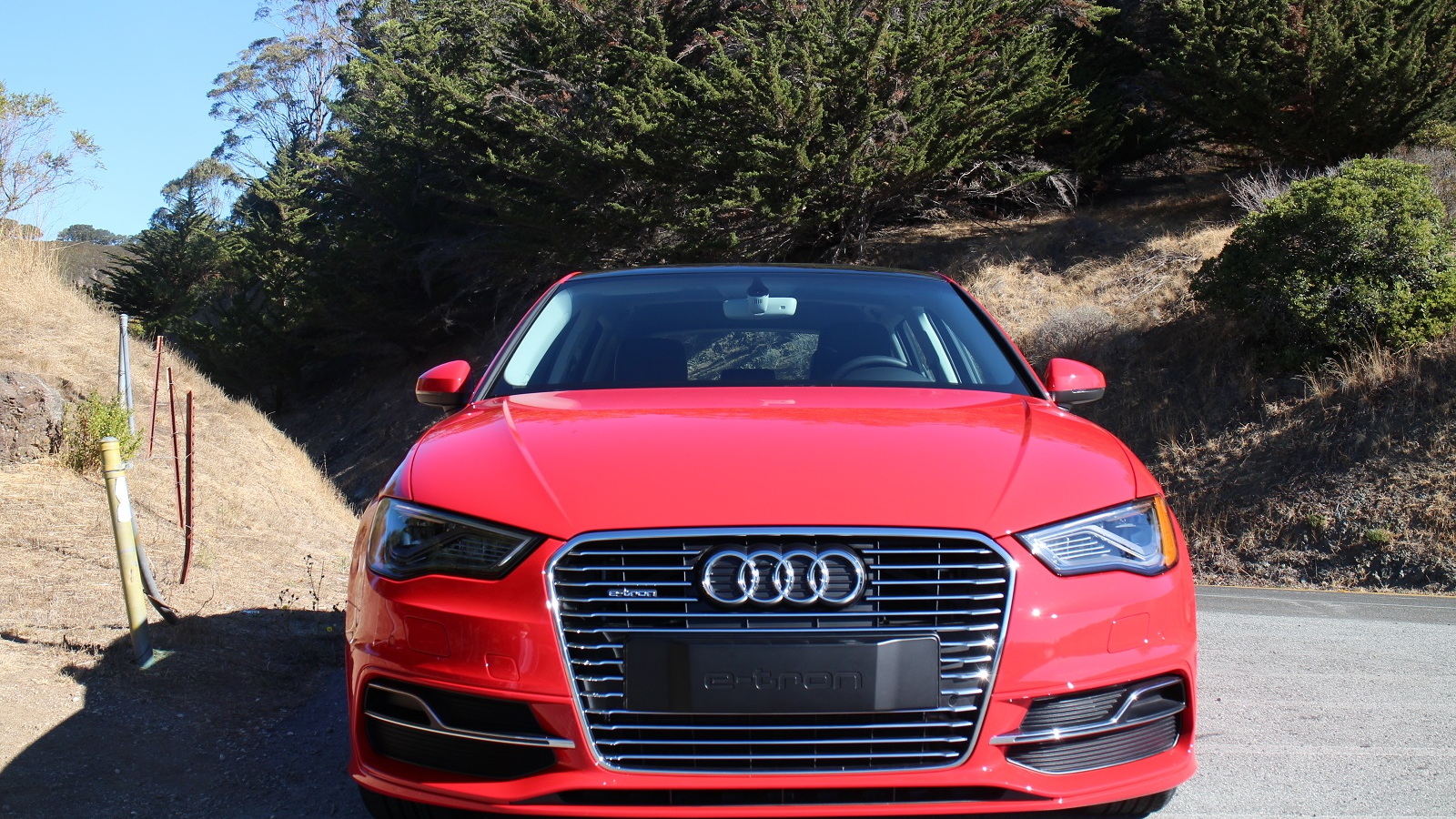 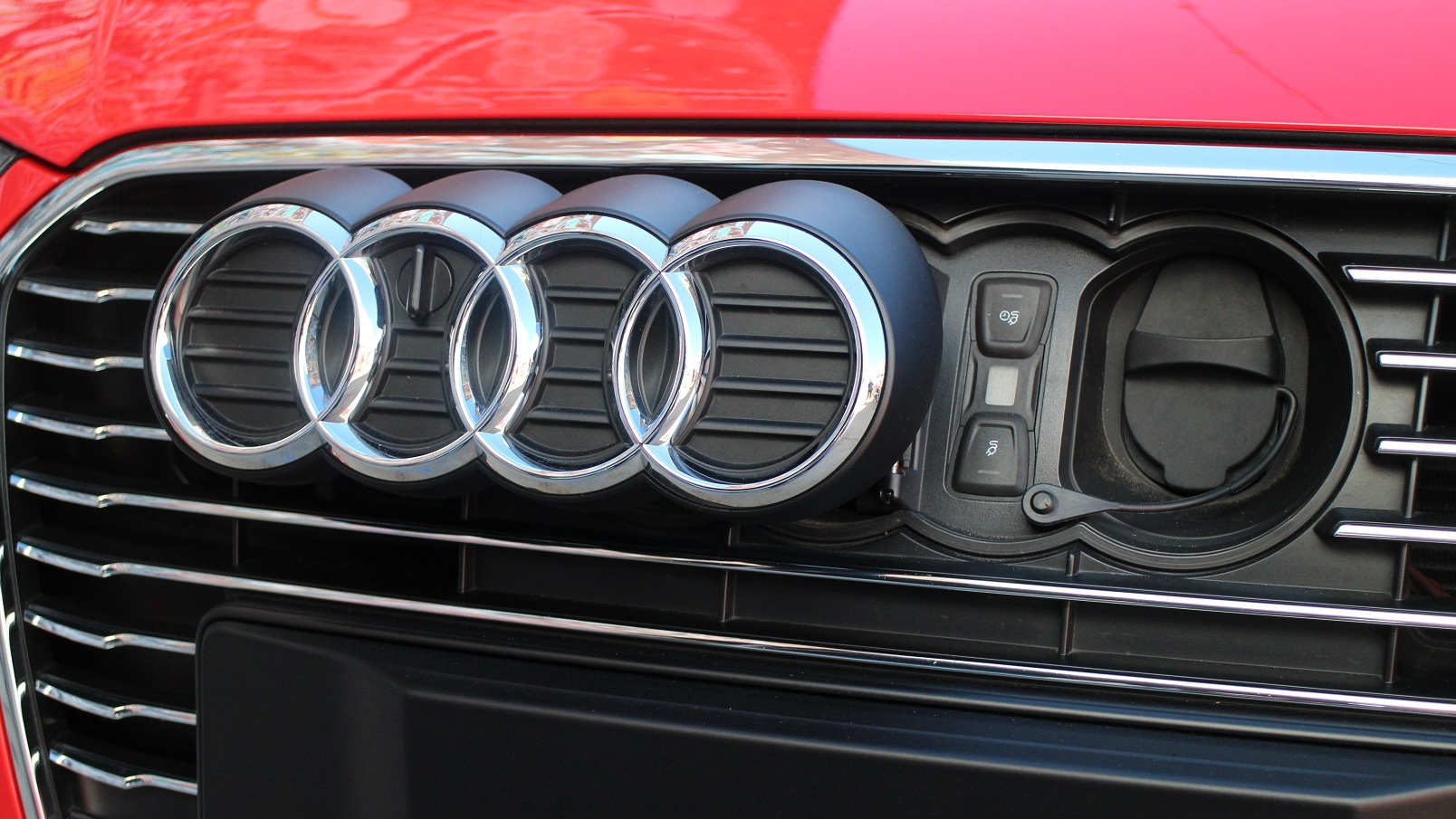 The 2016 Audi A3 e-tron Sportback is the German luxury brand's first plug-in vehicle to go on sale in North America--and by all indications, the company is serious about making it a success.

That goal clearly has nothing to do with the VW Group diesel-emission scandal that has engulfed Audi's A3 and Q5 TDI diesel models; the A3 e-tron has been a long time in the making.

We had a chance to drive it last week during parts of two days through the rolling hills and congested traffic of Silicon Valley.

The San Francisco Bay Area was a smart choice for the car's media drive, since Audi sells well there and so do plug-in cars.

The streets are littered with Teslas, Nissan Leafs, BMW i3s, and Chevy Volts, all of them distinctive enough that an increasing number of residents identify them as electric cars.

That's not the case with the A3 e-tron, however.

While the plug-in hybrid is the only version of the 2016 A3 lineup to use the five-door hatchback body (aka Sportback), there's little aside from a couple of badges to identify its unusual powertrain.

And the remarkably conservative approach Audi's designers took to the latest generation of A3s mean that this car bears a strong visual resemblance to the previous A3, on sale since 2006.

In other words, not only do you have to look carefully to see that this is a plug-in car--like the Toyota Prius Plug-In Hybrid--you may not even notice that it's a new and redesigned car.

Even the plug connector is neatly hidden behind a swing-out panel in the center of the grille.

Remove the "e-tron" script from the tailgate and you'd never know it was electric--and, according to Audi execs, dealers have been pushing for the Sportback to be fitted with conventional powertrains too.

Behind the wheel, the A3 e-tron is quiet, handles well, and has enough power to keep up with most fast-moving Silicon Valley traffic. It's not a hot hatch, but neither is it anemic.

The powertrain consists of a 150-horsepower 1.4-liter turbocharged four-cylinder engine with a 76-kilowatt (102-hp) liquid-cooled electric motor sandwiched between the engine and the S-tronic six-speed dual-clutch transmission driving the front wheels.

It's similar to the powertrain in the Volkswagen Jetta Hybrid, but with a more powerful electric motor that can move the car on electric power alone at speeds up to 65 mph or higher.

A liquid-cooled 8.8-kilowatt-hour lithium-ion battery pack is mounted below the rear seat, of which 7.0 kWh is usable. That gives an expected EPA range, Audi says, of 16 miles on electric power alone.

RELATED: 2017 Audi Q7 e-Tron Plug-In Hybrid Will Be Gasoline, Not Diesel, For U.S. And China

Indeed, we got 16.1 miles on a fully charged pack--and not just in low-speed traffic, either. The total included significant time at 50 mph or more.

But, like all plug-in hybrids except the Chevrolet Volt, the A3 e-tron has to turn on its engine when a driver demands maximum power by flooring the accelerator, past a detent.

That puts the powertrain into "Boost" mode (shown on the power meter), after which the engine stays on for some time, presumably to warm up its emission control system--even when there's charge remaining in the battery.

There's more electric-only acceleration available in the A3 e-tron than the plug-in Prius, probably more than in either of the Ford Energi plug-in hybrids too. (It's been awhile since we've driven either one.)

In most cases we were able to move away from a stop in electric mode, and the accelerator detent helped that process. It's not as strong as the Volt, but it's closer than most plug-in hybrids.

We still get startled when a car in all-electric mode shifts gears, but the A3 e-tron is hardly the only car to do so. Not only the Jetta Hybrid but also single-motor hybrids from Hyundai, Kia, Mercedes-Benz, and more shift in e-mode as well.

The e-tron's powertrain occasionally whined during full electric acceleration, but it's not unpleasant. Noise suppression is otherwise quite good, with the engine whirring remotely far up ahead when it was turned on.

The engine switching on, in fact, was only perceptible in the background--you can feel it, but it's miles away from the urgent howl of some other plug-in hybrids.

On the road, the A3's added weight made it feel slightly more solid than the A3 sedan we drove last year.

It drives very much like you'd expect a compact European sporty hatchback to drive, in fact--regardless of powertrain.

We noticed a handful of electronic quirks in the A3 e-tron, at least some of them common to some other Audi models:

As for Audi's commitment to plug-in cars, the U.S. arm says it's dead serious about selling the A3 e-tron throughout its U.S. dealer network.

It's very much a 50-state car, executives stressed, noting that so far, 271 of Audi's 278 U.S. dealers have committed to sell the car, install the special equipment, and train mechanics and staff to handle it.

The company also gets credit for being the first carmaker whose portable charging cord comes with interchangeable 120-Volt and a 240-Volt cords.

That lets drivers charge at the higher rates available from 240-Volt stove or drier outlets if available--and attention to those details is something owners will come to appreciate.

Looked at among the two dozen other plug-in cars on sale in California, the plug-in hybrid A3 is a nice, competent European compact hatchback that's enjoyable to drive.

But the crux of its dilemma is that range. Sixteen miles would have been good in 2013--but it's at the lowest end of the field for 2016.

With the 11-mile plug-in Prius gone, there's a handful of European plug-in hybrids with ranges hovering around 15 miles.

They're good first steps, but they don't raise the bar.

And with the 2016 Chevy Volt offering a 53-mile range--and attracting at least some buyers from Audi, BMW, and other prestige brands--it's hard to make the case that the plug-in A3 competes on a lot more than its brand identity.

That said, we eagerly look forward to its next iteration when, we suspect, range will double or more.

With a 35-to 40-mile range, this could be the almost-all-electric Audi, at a lower price than its upcoming Q6 e-tron all-electric SUV coming around 2018.

Until then: Good first effort, but should try harder.

It qualifies for a Federal income-tax credit of roughly $4,000 (exact amount to be determined shortly) and a California purchase rebate of $1,500.