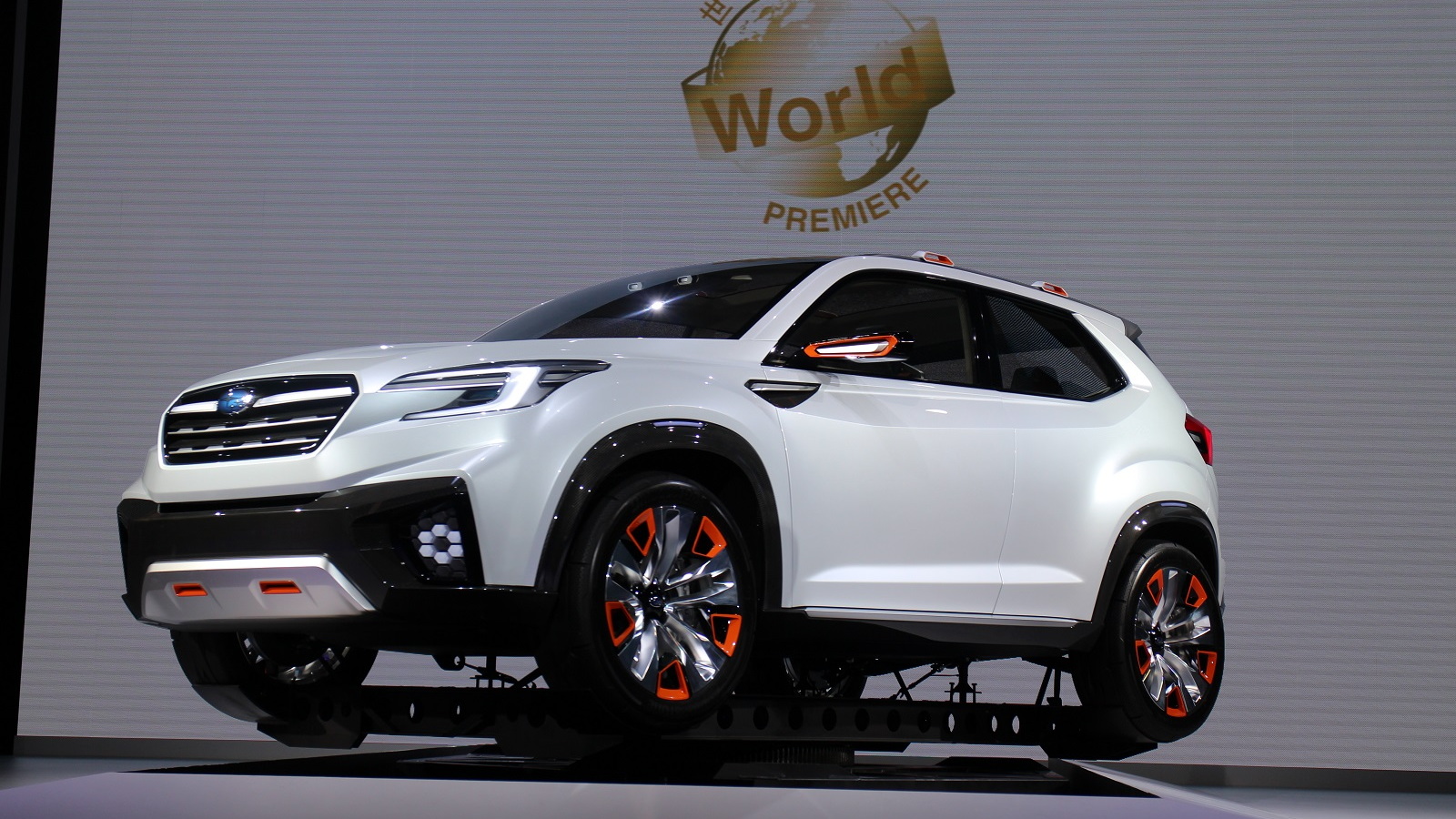 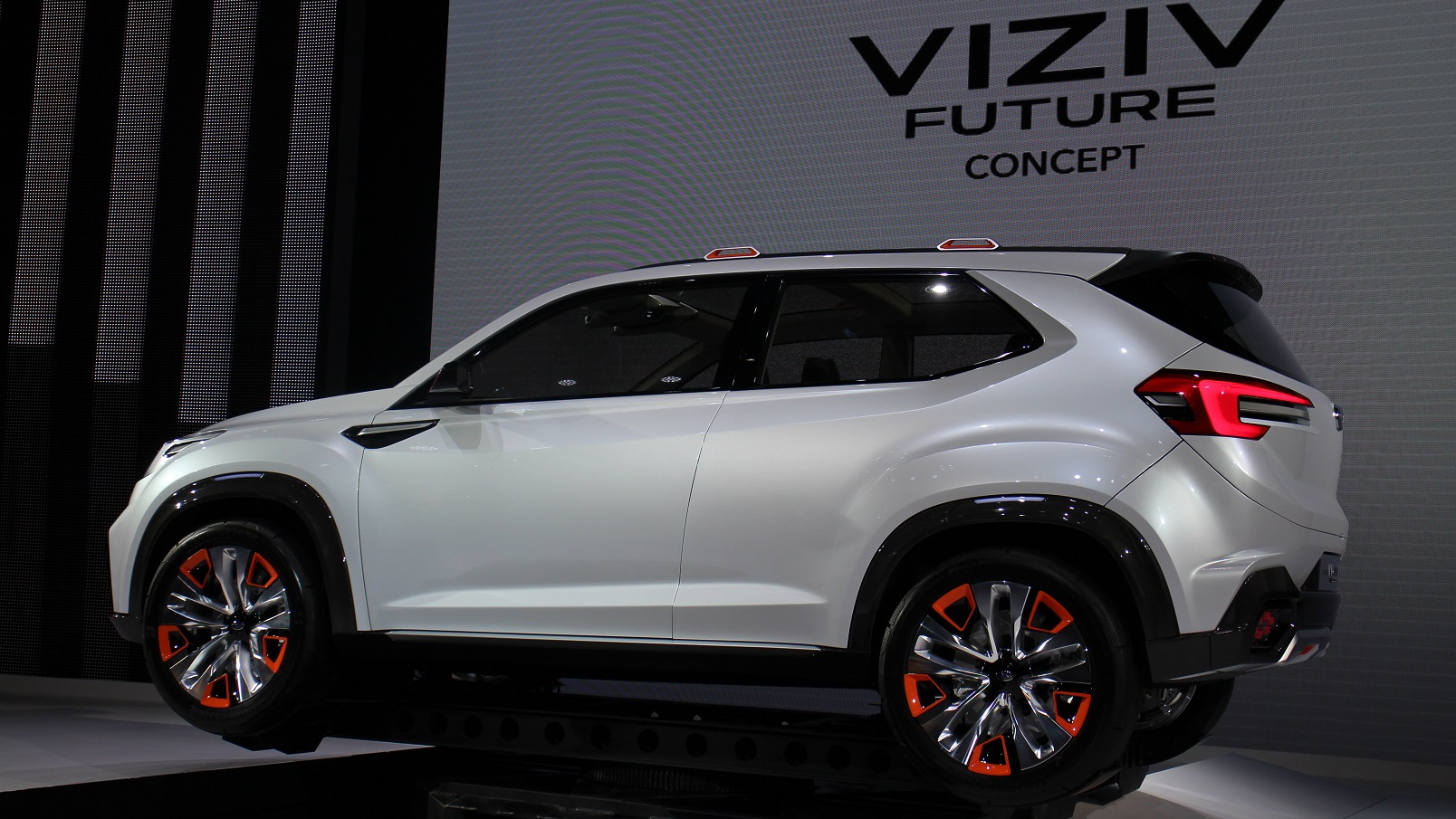 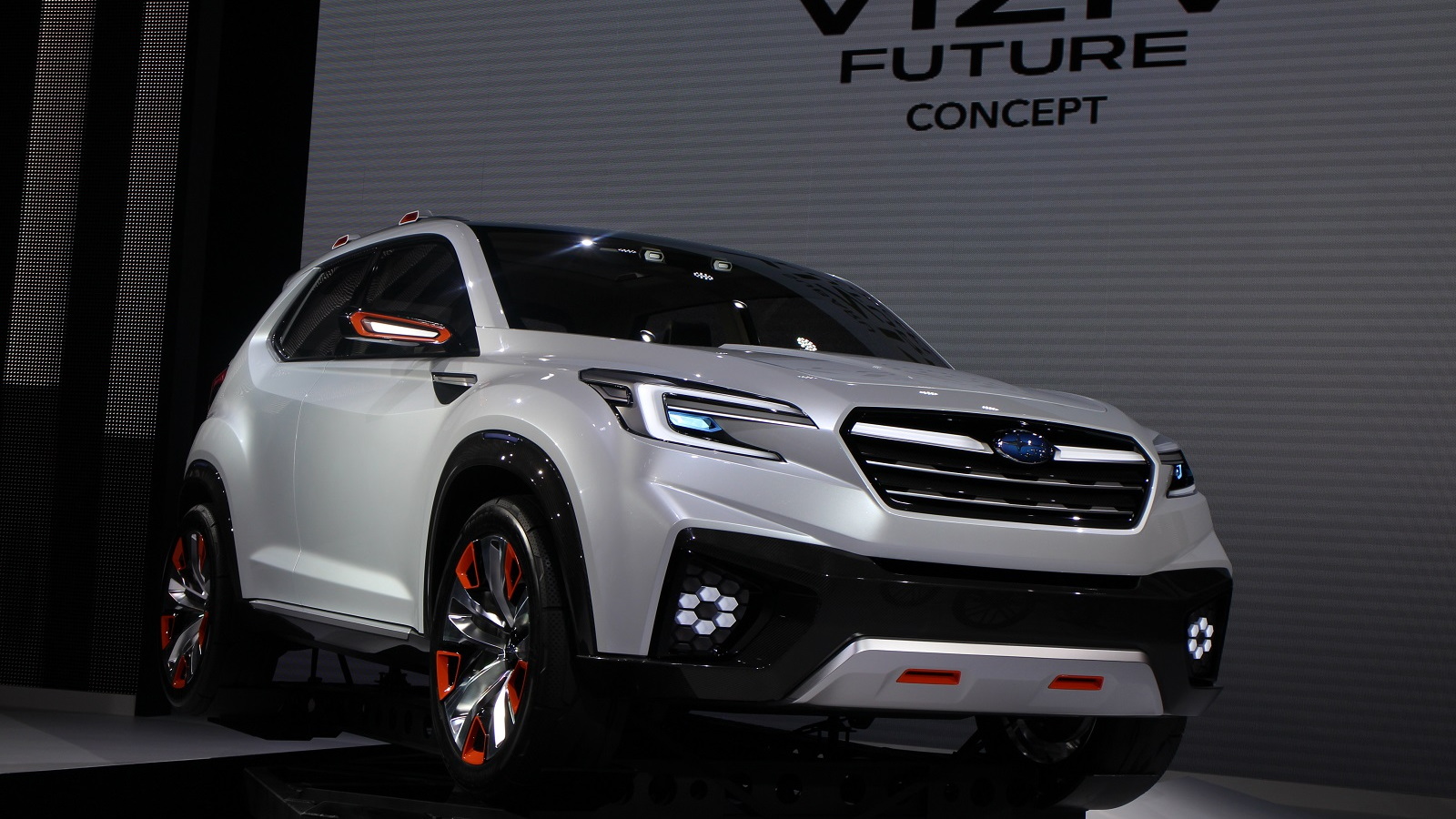 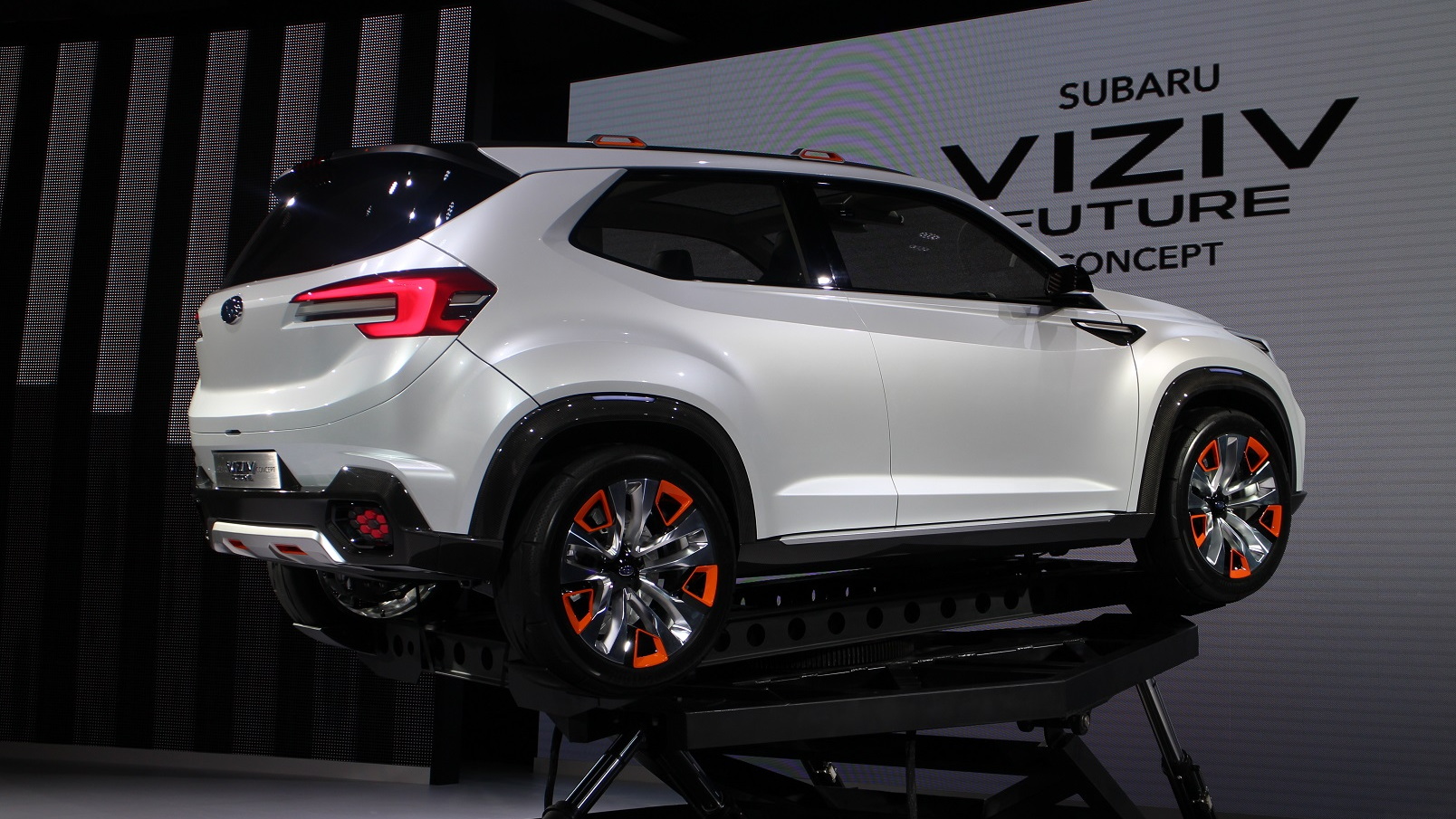 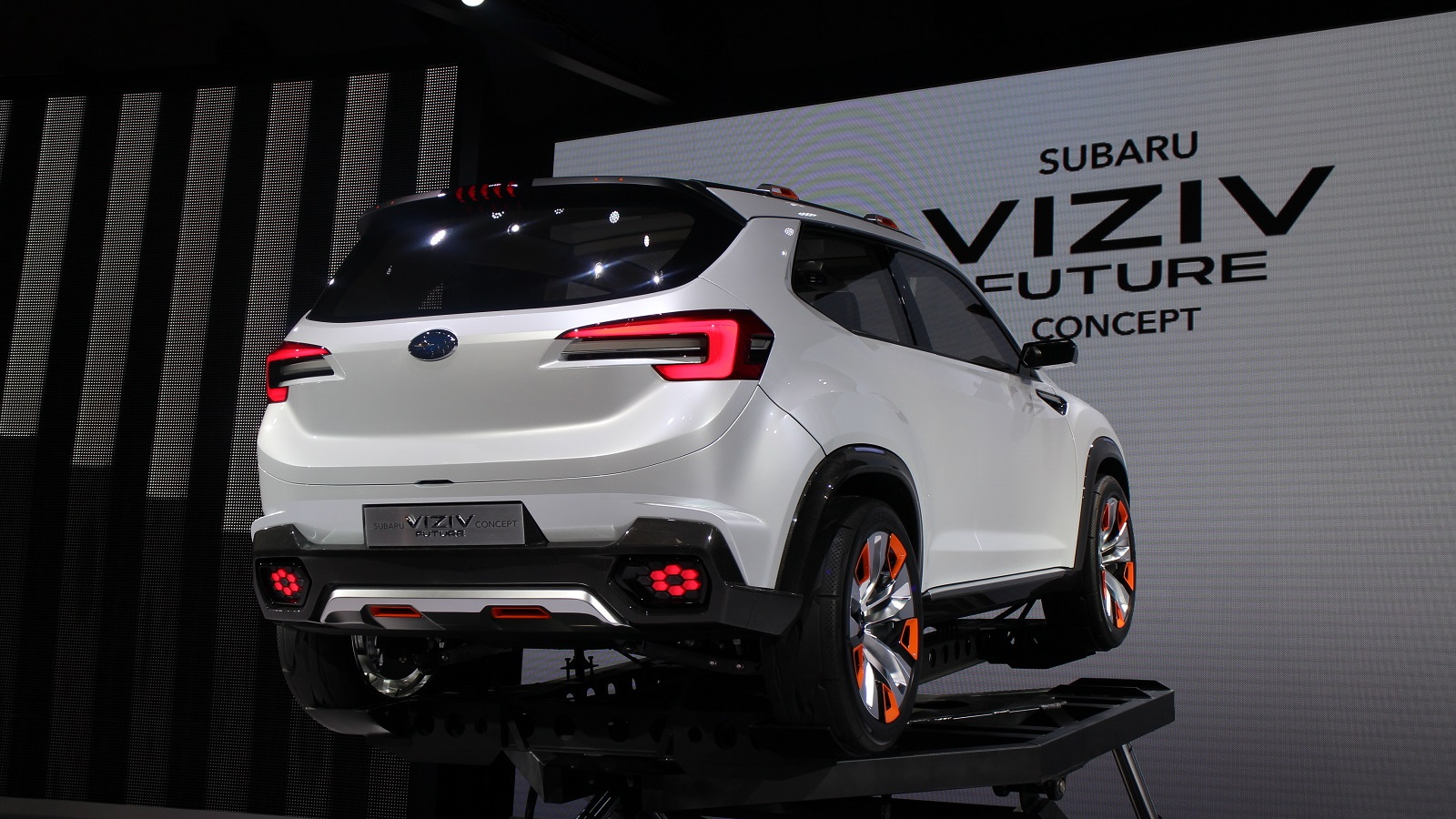 One was a thinly disguised version of the upcoming 2017 Subaru Impreza hatchback, labeled a concept, but the other was a genuine concept car displaying innovations that may (or may not) make it into future production vehicles.

The Subaru Viziv Future Concept, to give it its full name, is a compact crossover utility vehicle that's the third iteration of Subaru’s Viziv (short for “Vision for innovation”) line of SUV concepts.

Subaru says the latest Viziv demonstrates its next-generation hybrid system, which uses a downsized turbocharged flat-four engine to power the front wheels. The company wouldn't comment on the engine's displacement.

The rear wheels, however, are powered by an electric motor rather than mechanically driven from the engine, making this a "through-the-road hybrid" similar to the all-wheel drive used on hybrid versions of the Toyota RAV4 and Highlander and the Lexus NX and RX crossovers.

Dispensing with the conventional driveshaft permits an entirely flat floor in the rear compartment, improving practicality of this utility vehicle.

Subaru's present mild hybrid system, sold only in small numbers on the XV Crosstrek, uses a low-power electric motor sandwiched between the engine and continuously variable transmission (CVT) to provide added torque that assists the engine, with braking and overrun energy recaptured to charge a small lithium-ion battery pack.

The Viziv Future also previews the next generation of Subaru's well-received EyeSight camera vision system, which enables some autonomous driving functions under limited circumstances: highway speeds or for self-parking.

The new EyeSight version combines the advanced frontal recognition of the current system with radar sensing in all directions, allowing the vehicle to perceive the traffic environment all around it and assess the risk of movements on all sides.

In addition, highly-accurate GPS and map data are used to pinpoint the vehicle location with high precision. Inside the Viziv Future, Subaru is also previewing a camera that monitors the driver for alertness.

New connectivity and telematics features that provide up-to-the-minute information on traffic, weather and other conditions along the route ahead are also part of the package.

It remains unclear if the Viziv Future previews a future XV Crosstrek that's more distinct from its Impreza roots than the current generation, or whether it might point to a next-generation Forester (not due until 2019).

Either way, we strongly suspect the sliding rear doors and missing center pillar probably won't make it into production.

For all the news from the press events at the 2015 Tokyo Motor Show, head over to our news page to see the latest live photos and other news.