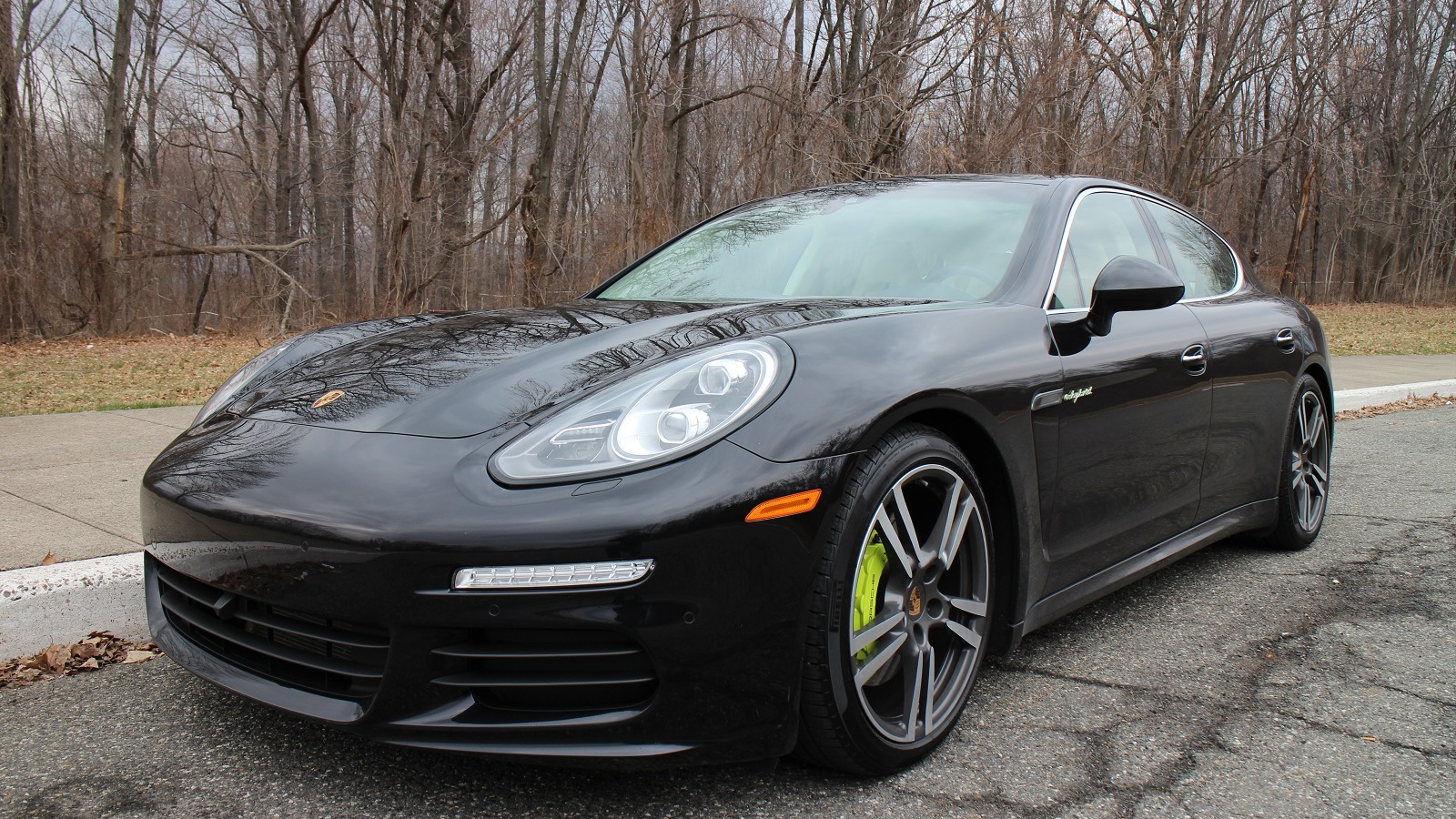 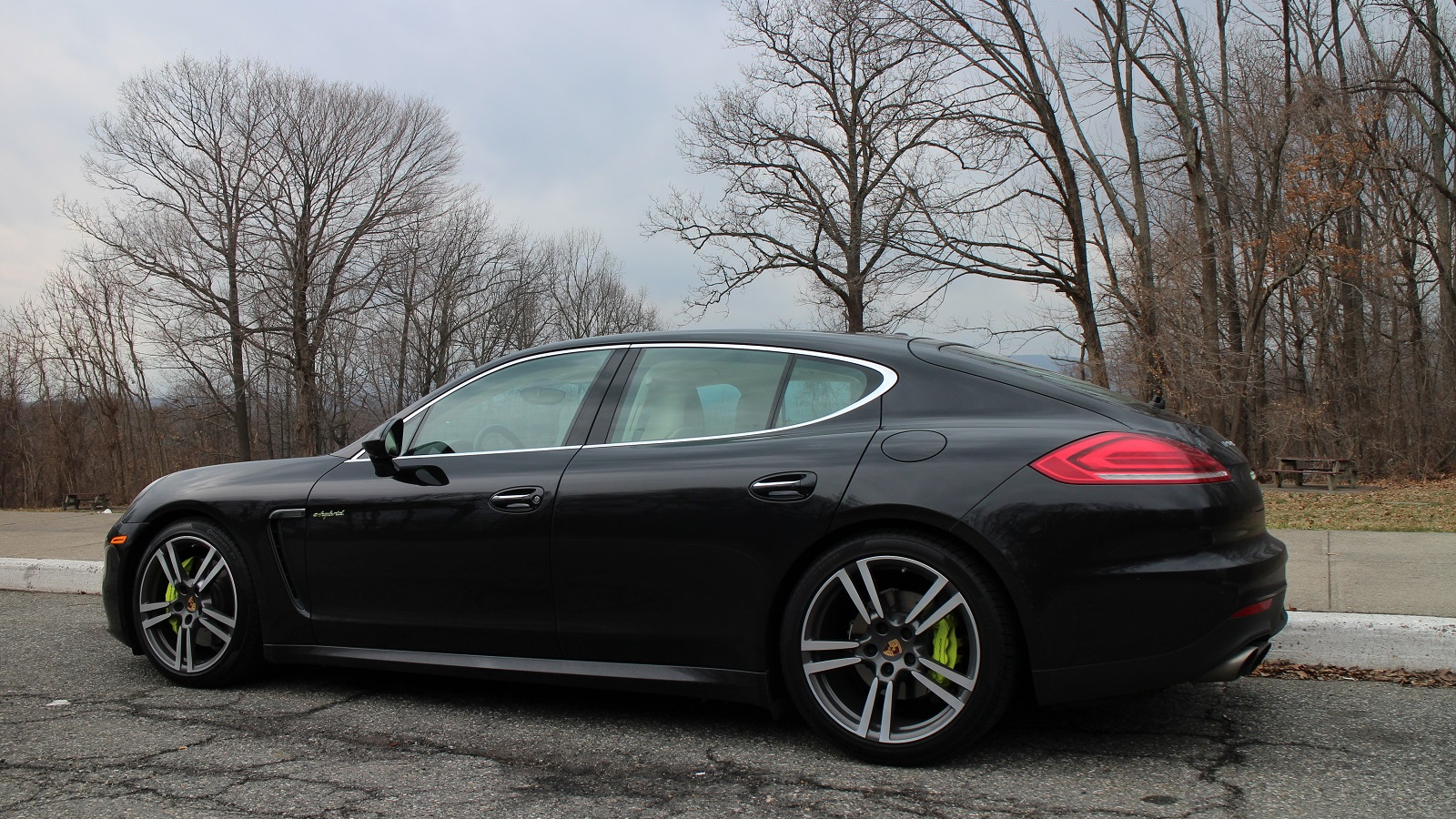 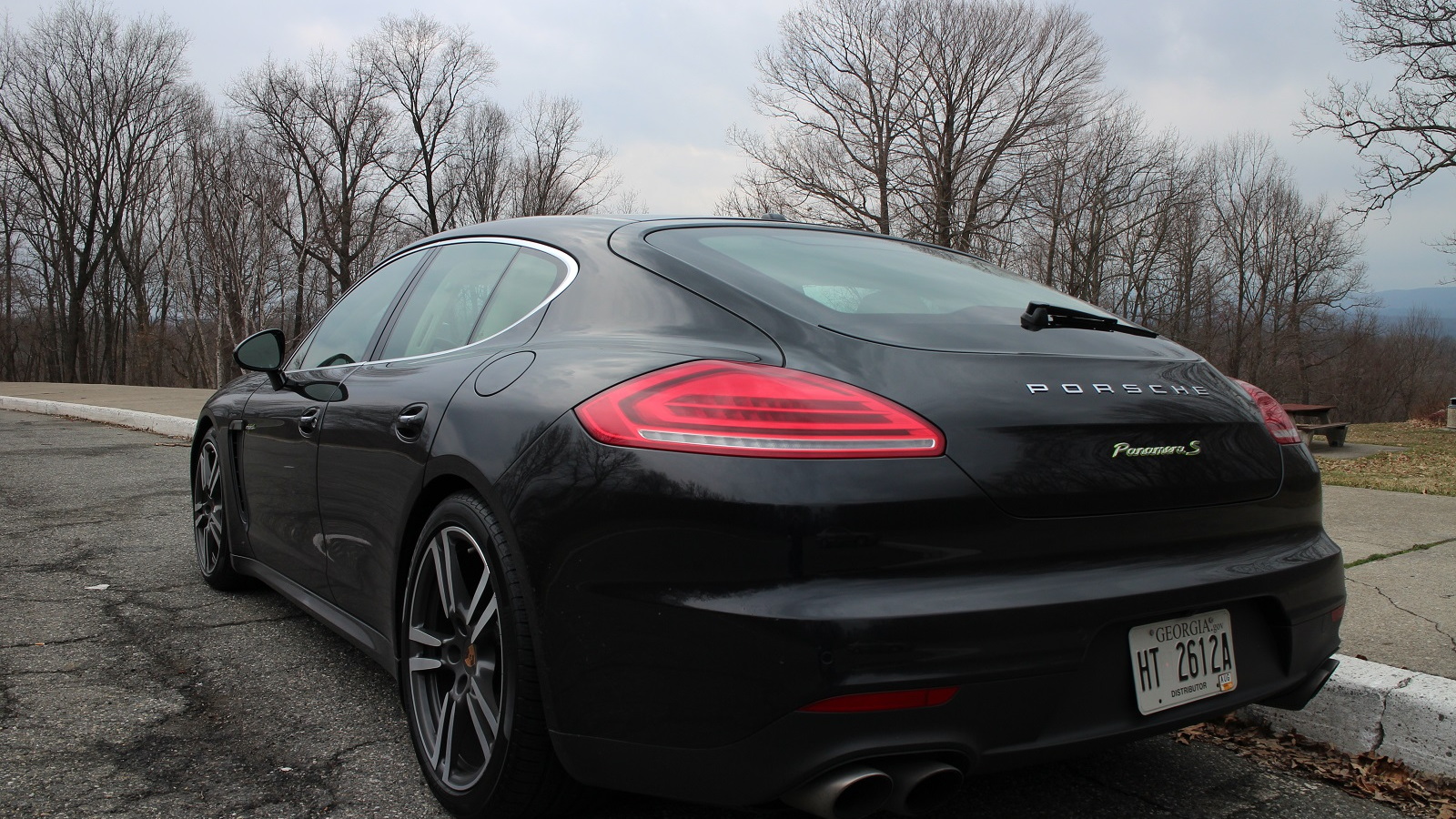 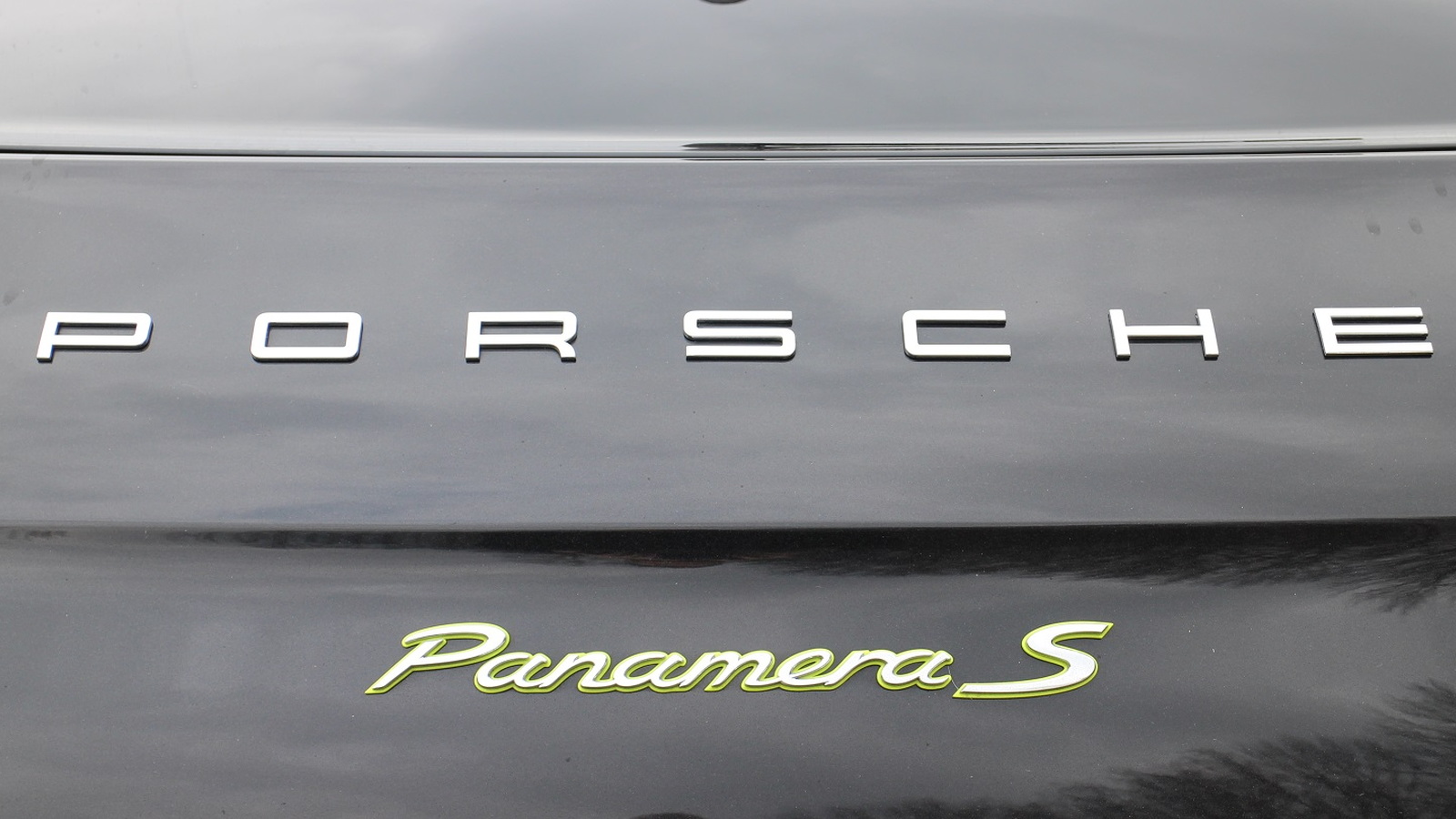 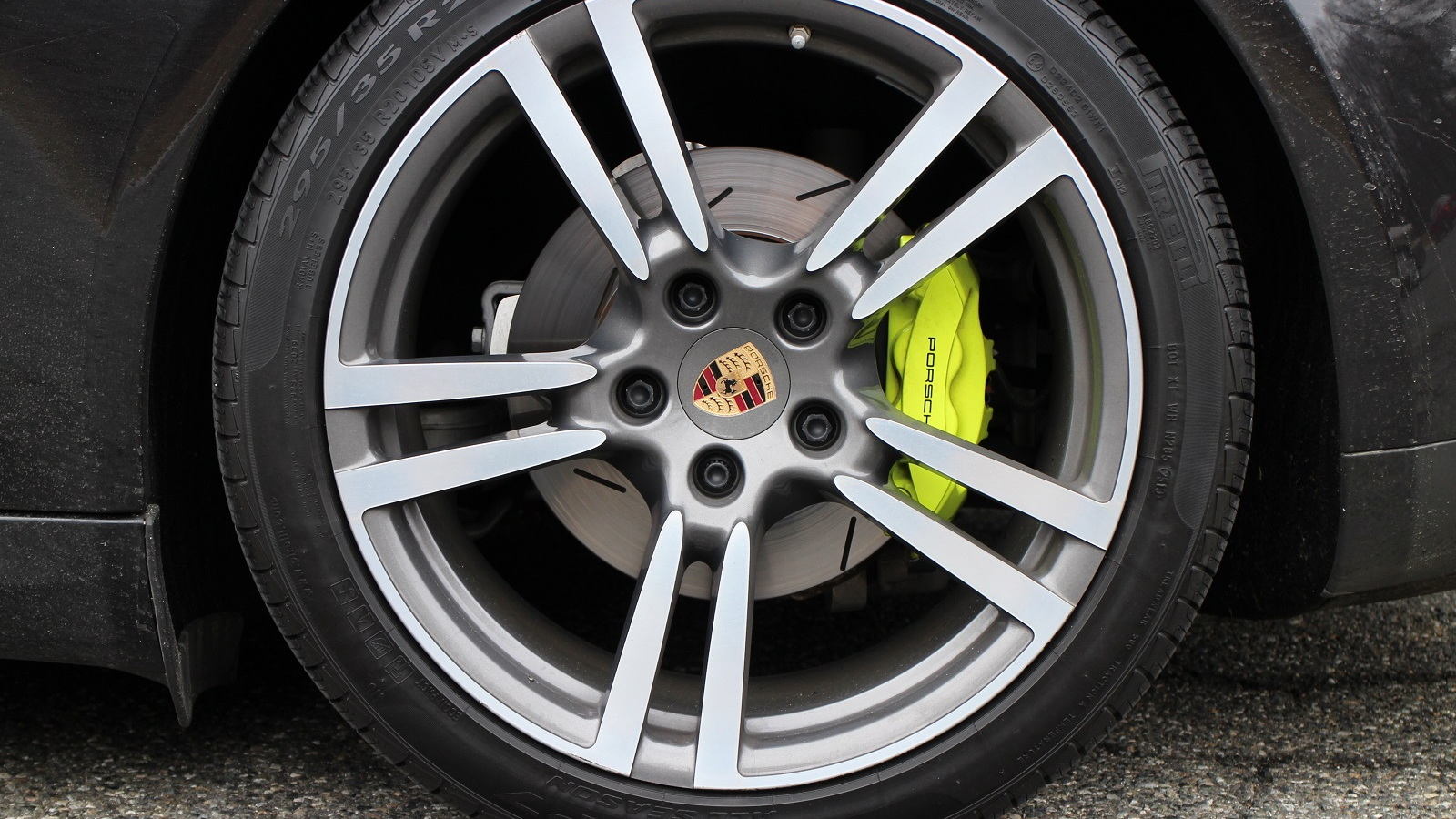 It's rated at 16 miles of electric range, but we didn't achieve that in cold and snowy upstate New York "springtime" weather.

We strongly suspect that very few people who've driven a Tesla Model S will view the Panamera E-Hybrid as a competitor.

Instead, it operates almost entirely as a a very good but very expensive hybrid luxury sedan--and the sports-car maker's first plug-in hybrid vehicle.

It's since been followed by an E-Hybrid version of the Cayenne, adapting the same plug-in hybrid powertrain to the larger of two Porsche SUVs.

So think of the Panamera E-Hybrid, if you like, as a rough first sketch for a truly amazing all-electric Porsche sport sedan--around, say, 2020.

We put 520 miles on the most expensive test car this site has driven, over a four-day weekend that took us from New York City into the wilds of upstate New York and back.

The car was delivered with the battery discharged, so it operated in conventional hybrid mode for its first 238 miles.

Over that period, its trip computer told us we achieved fuel consumption of 7.4 liters per 100 km. (That's 31.8 miles per gallon in U.S. terms.)

Even before testing its electric range, driving the Panamera E-Hybrid revealed two things.

First, it's a relaxing, comfortable, and luxurious way to travel: a big car that "drives small," or at least smaller than its 4,600-pound weight and its considerable size.

Second, the single-motor hybrid setup offers real benefits not only in stop-and-go and low-speed traffic, but also at highway speeds, including those above the legal limit.

The Panamera range is large and sprawling, spanning everything from a base model with a 3.6-liter V-6 to the rip-snorting Panamera Turbo S Executive with its turbocharged 4.8-liter V-8.

But only the E-Hybrid comes with a plug. Its 333-horsepower 3.0-liter supercharged V-6 is mated to an eight-speed automatic transmission; between the two is a 70-kilowatt (94-hp) electric motor producing 230 lb-ft of maximum torque.

Total maximum output of this powertrain is 416 hp, according to Porsche, with a top track speed of 167 mph (we didn't test that) and acceleration from 0 to 60 mph in 5.2 seconds.

The 9.4-kilowatt-hour lithium-ion battery pack is rated at 16 miles of electric range, and 540 miles overall between the battery and gas tank.

We stored the car overnight and plugged it in to a 120-Volt outlet; it took 11 hours to recharge the battery entirely at temperatures right around freezing.

After a further cold soak, the car indicated 12 miles of range--and on the uphill journey back into rural roads, we got exactly 9 miles out of it.

In E-Power mode, though, we were surprised that the heated seats were supplemented by a trickle of warm air from the dash vents. That likely accounted for some of the deficit.

The car spent more than 500 miles running as a hybrid, and in that vein, it's a good one.

Idle creep away from a stop is all electric, and the plug-in Porsche accelerates briskly to 10 or 12 mph before it engages the engine.

As befits a car with a $100,000-plus price tag, the engine is noticeable but not intrusive unless you floor it. And when you do back, clearly hearing the engine is part of the Porsche DNA.

The start-stop system works well, aided by an electric motor beefy enough to move the car away from rest.

And Porsche has managed the difficult trick of blending regenerative and friction braking, a hard thing to do in the early years of any maker's hybrid development.

We only experienced a few lurches, in single-digit speeds where we lifted up on the brake just a bit (as regen dwindled with acceleration) and then pressed again (when the friction brakes kicked in more strongly).

Most impressive in some ways was the "sailing" feature, in which the Porsche's engine switches off at speeds even above the legal limit when power demand is low.

With wind and tire noise at highway speeds, the shutoff is completely imperceptible, and only the tachometer betrays an engine speed of 0 rpm.

On gradual downhill slopes, the engine could stay off for a minute or longer, but our up-and-down route through hilly central New York state saw it flipping on and off quite frequently.

As for fuel economy, both of our long trip legs came in between 31 and 32 mpg.

That was largely higher-speed usage, and over 520 miles, the 9 miles of electric-only running was pretty much negligible in calculating fuel economy.

Other aspects of spending time with a Porsche Panamera:

We'd venture to say the best part about driving the plug-in Porsche was the positive reaction from people in other cars.

Two little boys waved excitedly from the back seat of a family SUV; a pretty middle-aged blond woman in the passenger seat of a Lexus LS smiled directly at us; and three young guys in a slammed Infiniti G35 all gave us big grins and thumbs-up signs.

That was when the car was nice and shiny, anyhow. Sadly, with slush and road muck on it, no one paid attention.

In the end, we came away a little more impressed with the Porsche Panamera S E-Hybrid than we had anticipated.

Sure, it's nowhere near the Tesla Model S for performance, electric range, or cutting-edge technology. And the two cars may be a tie for general cool factor, to our surprise.

But the relatively high degree of electric-only running at speed clearly boosts fuel economy, and it gives Porsche experience with electric propulsion beyond the usual economy-car start-stop and low-speed driving cycles.

It's not as "pure" as the higher-performance gasoline-only Porsches, but the company understands that the landscape of luxury and performance cars is changing--and doing so very rapidly.

If the rumors that Porsche is planning a true Tesla competitor are true--it even supposedly has a type number, the 717--then the E-Hybrid can be considered a toe in the water, a first test case to see how at least some electric-only driving works in the real world.

More electric on the way

The Panamera we drove is now an old car, remember. Launched for 2010, it will be replaced with a new model for 2017--one in which electric propulsion and plug-in technology will likely be better integrated, stronger, and longer-range

So we look forward to the next generation or two of Porsche electrified products.

Meanwhile, the Panamera E-Hybrid is a nice enough luxury hybrid sedan with a little bit of electric range.

If you're the kind of person who routinely writes six-figure checks for your sedans, anyhow.

Our 2014 Porsche Panamera S E-Hybrid came with a base price of $99,000. On top of that were no fewer than 19 line items for optional features (plus five more listed at no cost).

This came as no surprise; Porsche options are legendarily pricey, and it's often impossible to find "base model" cars at U.S. dealers.

The three most expensive, in order, were the $4,700 Premium Package Plus, the $4,185 leather interior "in Marsala/Cream" (which was downright delicious), and then the mysteriously named "Interior Package Painted," at $2,570.

The total bottom line, including a mandatory $995 destination charge, was $131,340--or about the price of a fully loaded Tesla Model S P85D.