Size is relative, and what counts as a small car today would have been viewed as much larger 50 years ago.

Nowhere is that more obvious than in the case of perhaps the definitive front-wheel-drive economy car, the British Mini.

But today's 2015 MINI Cooper is considerably more maxi than it used to be; each of the little hatchback's three modern incarnations has gotten larger. 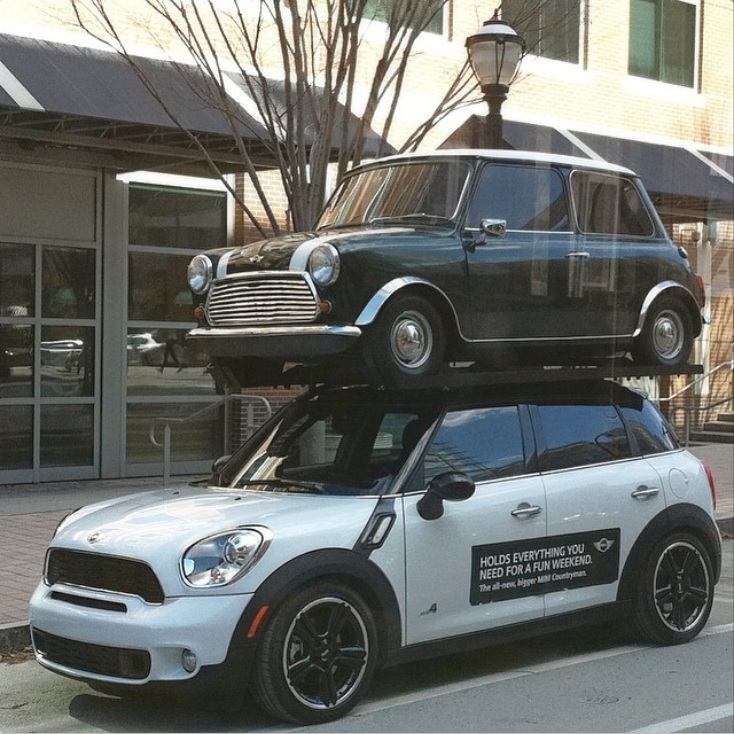 And even the first generation unveiled in 2002 was much, much bigger than the original 1959 Morris Mini-Minor created by famed auto designer Alec Issigonis.

An Instagram post by TheShadowCollections shows an original Mini sitting on the roof of a MINI Cooper Countryman.

The Countryman may be the largest of several so-called MINI models, but the original perched on its roof--apparently on a tray or rack custom-made for the purpose--points out just how big the subcompact utility actually is.

It is part of a roster of MINI models that has expanded from a single three-door hatchback to include Cooper S performance versions, a convertible, and then more recently, a two-seat coupe, and a two-seat roadster derived from it.

On top of that, the much, much larger MINI Cooper Countryman small SUV is a crossover utility vehicle that's one of two MINI models that can be ordered with all-wheel drive.

The other is the MINI Cooper Paceman, a rather less useful three-door hatchback utility vehicle spun off the Countryman.

Among the various options, performance tuning levels, trim packages, and dealer accessories, there are literally millions of different ways to buy a MINI these days.

None of them, mind you, as minimal as the original Mini.