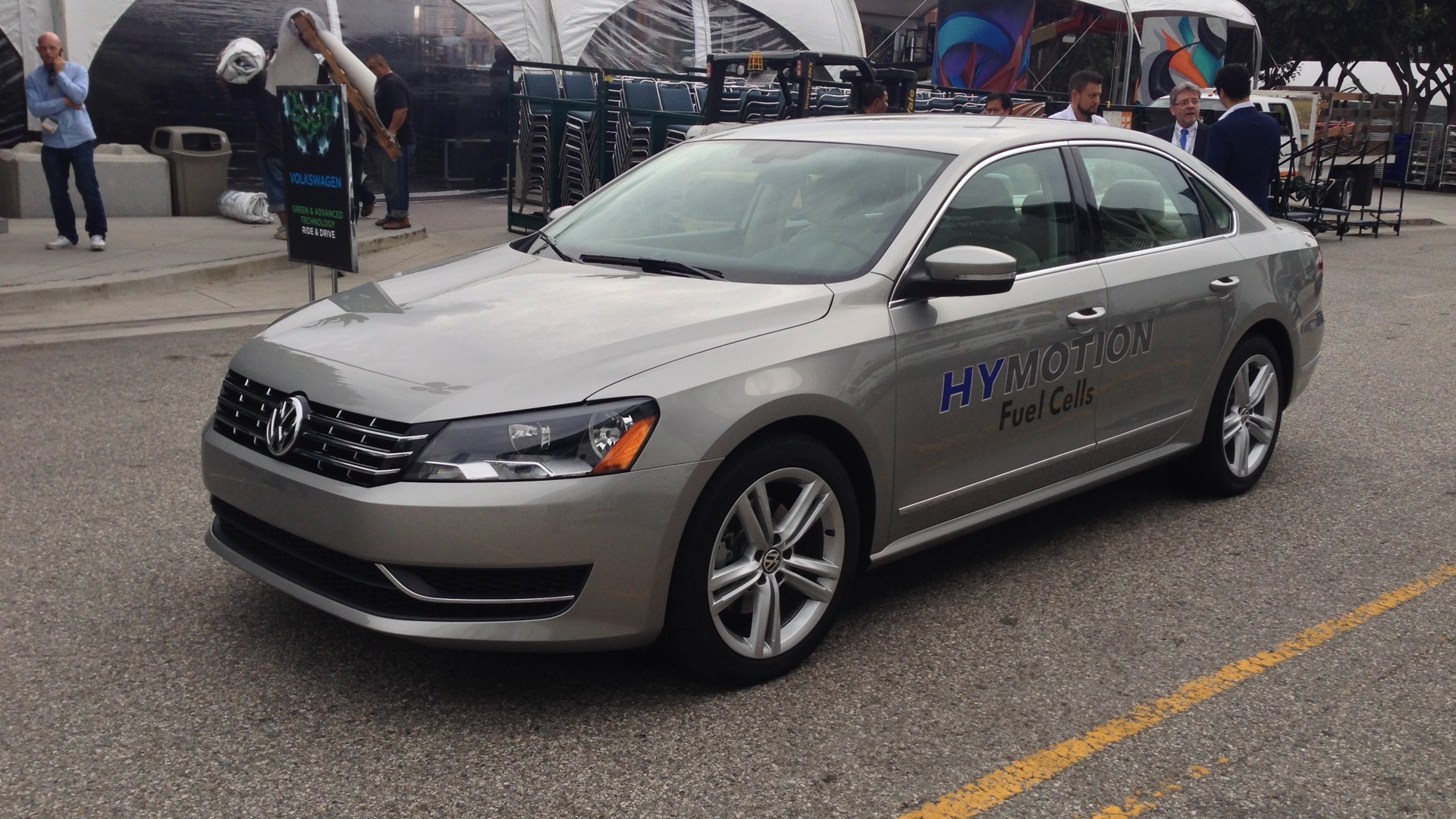 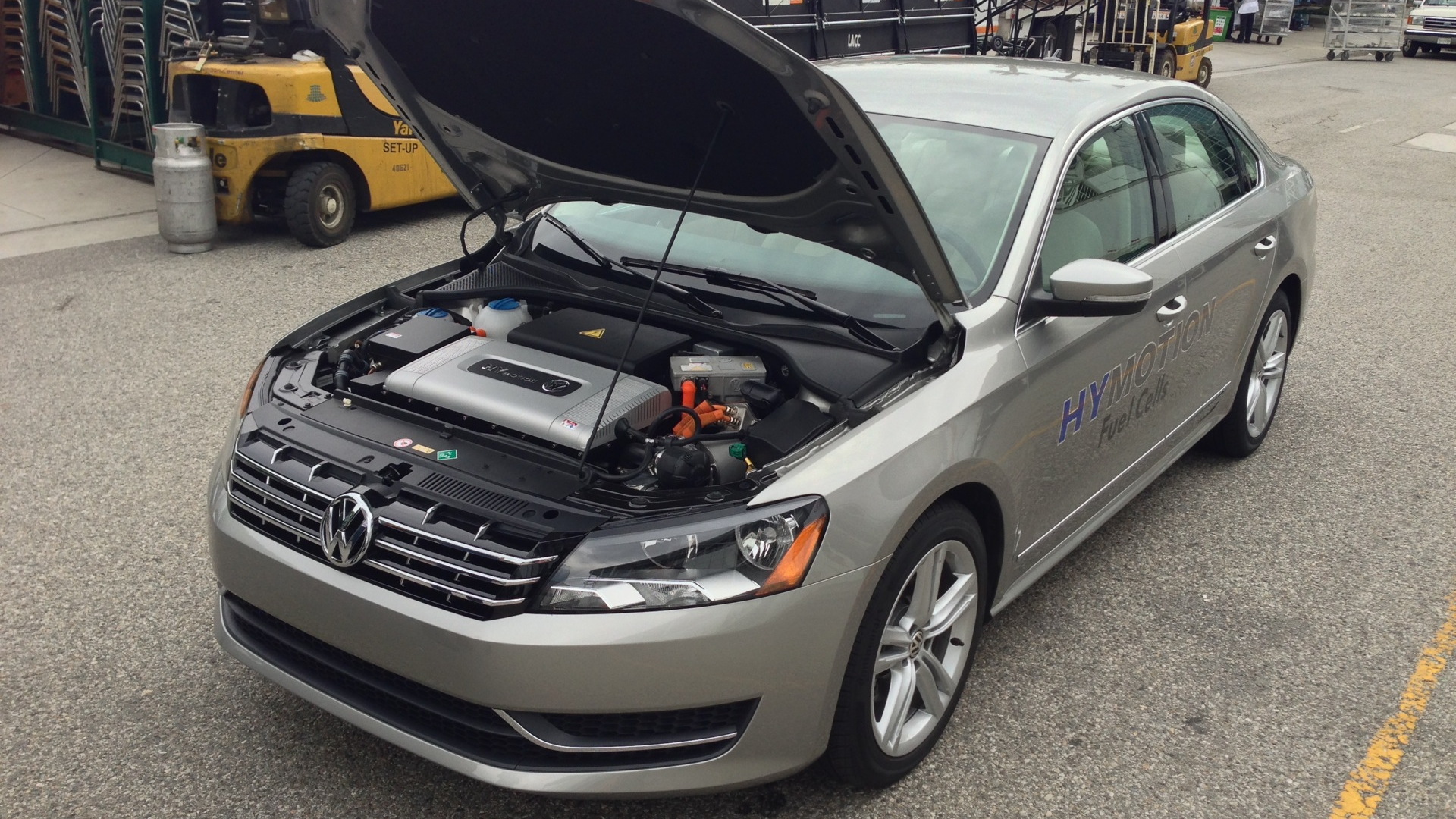 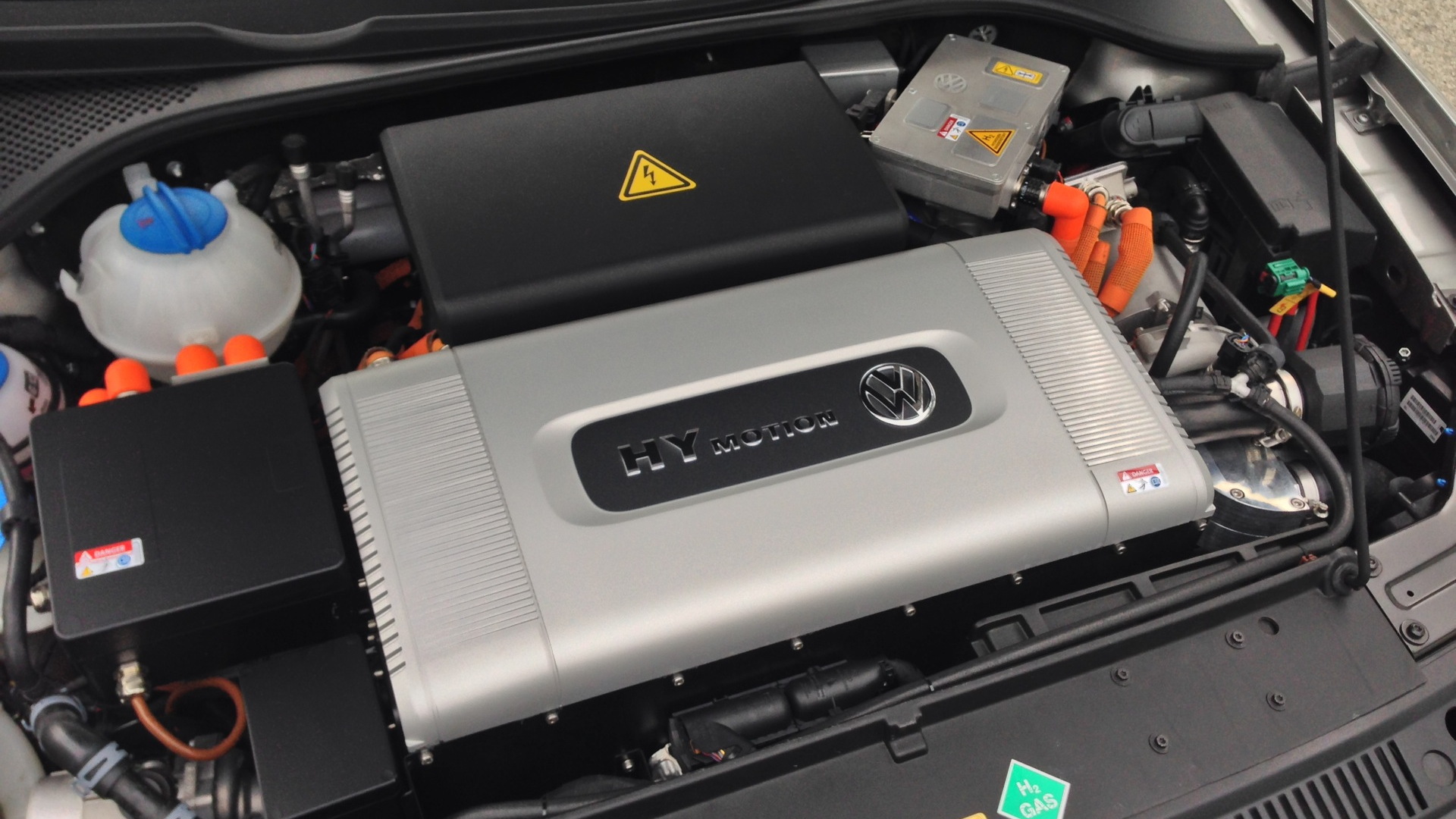 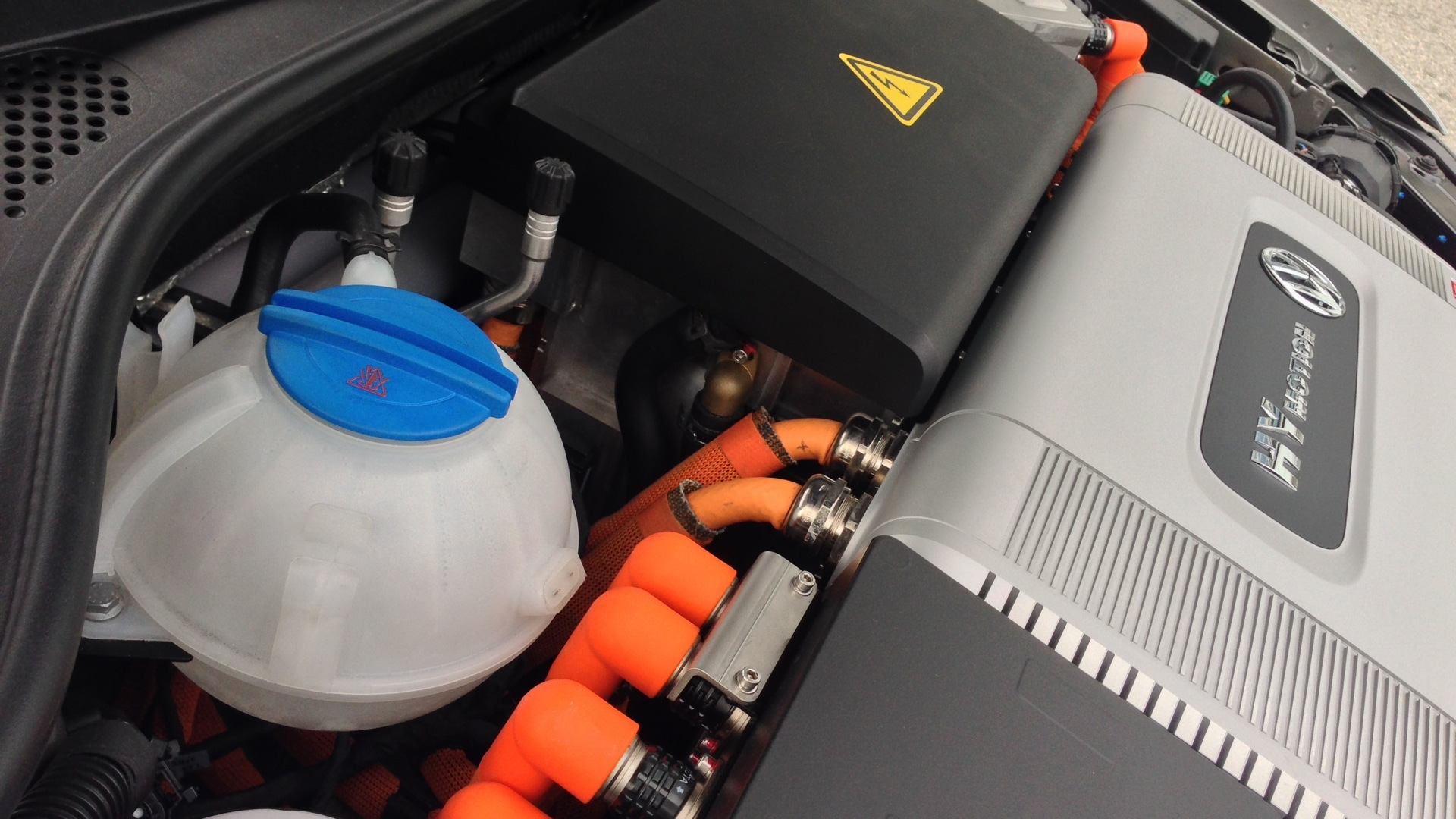 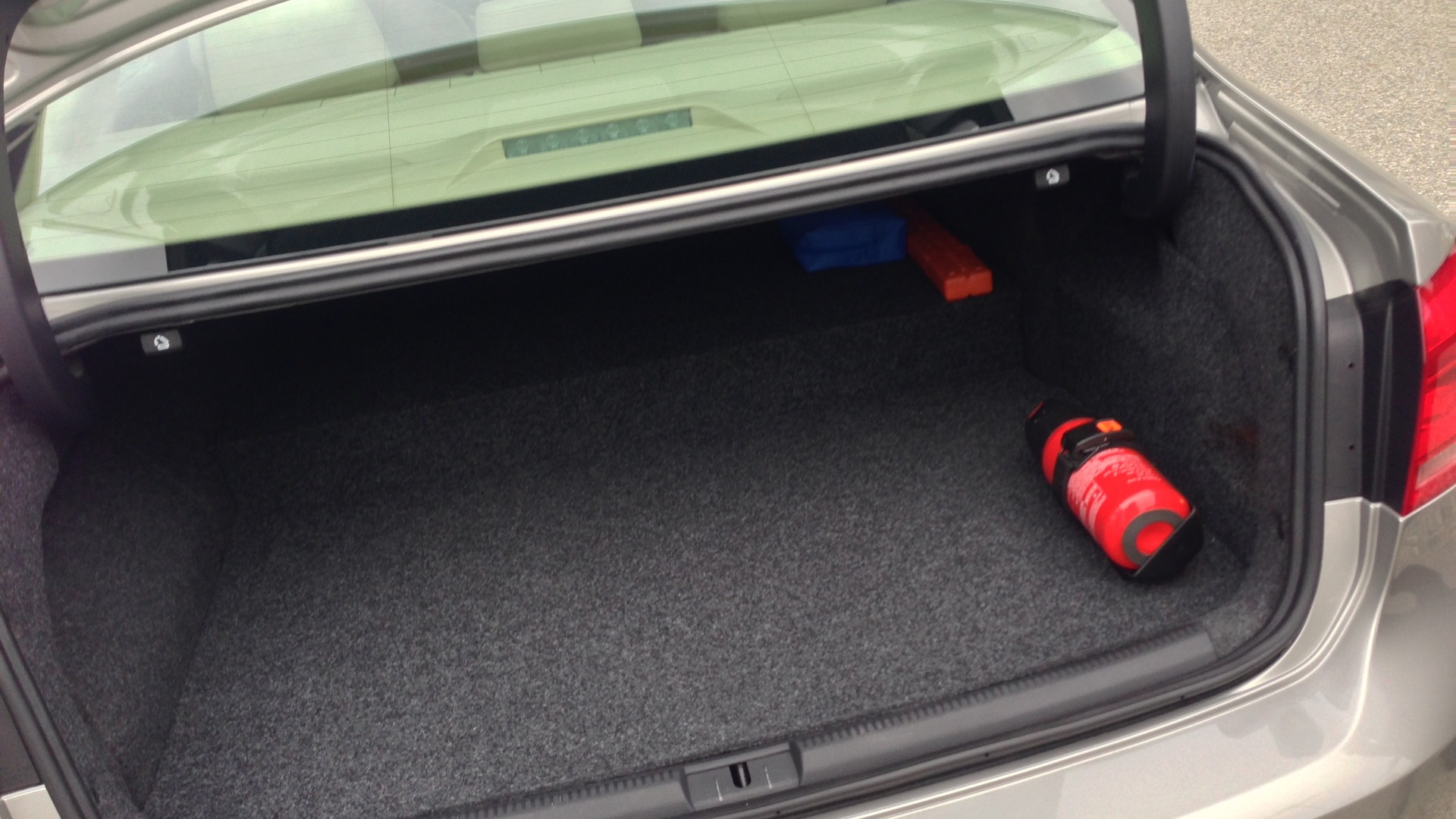 The 2016 Toyota Mirai may have been the biggest news in hydrogen fuel-cell vehicles at last week's Los Angeles Auto Show, but it wasn't alone.

VW Group brought two fuel-cell prototypes to the show's green-car ride and drive program, and we spent 15 minutes driving one.

That component set was designed to accommodate everything from gasoline and diesel engines to full battery-electric and hydrogen or natural-gas power.

While the U.S.-built 2014 Volkswagen Passat we drove doesn't use the MQB architecture, its replacement will, a few years hence.

VW wanted  to demonstrate the experience of driving a mid-size sedan powered by a fuel cell, previewing a possible hydrogen-powered Passat in the future.

Perhaps Volkswagen wanted to show that it, too, could build a comfortable, drivable fuel-cell sedan just like Toyota.

So we climbed into what looked entirely like a conventional VW Passat with "HyMotion" stickers on its sides.

The U.S. Passat had been sent to Germany, where engineers removed its combustion engine and fitted a combination of parts from VW's electric and hydrogen powertrains.

Four reinforced storage tanks (two under the rear seat, two below the trunk floor) hold 5 kg of hydrogen at up to 10,000 psi (70 MPa).

VW quotes a total range of 500 km (310 miles), though that's on the lenient European cycle, and a North American equivalent might be closer to 250 miles.

The hydrogen tanks feed a fuel-cell stack, located under the hood along with the power electronics for the electric-drive system, that generates roughly 100 kilowatts of electricity.

The 100-kW (134-horsepower) electric motor that drives the front wheels is from the 2015 Volkswagen e-Golf, while the 1.1-kilowatt-hour lithium-ion battery pack that buffers power demand is from the VW Jetta Hybrid.

But they stressed that any future production version on the MQB architecture would be considerably lighter, as the design was built to accommodate hydrogen from the start.

On the road, the hydrogen-powered Passat moves out smartly--assisted by some battery power--and operates smoothly.

Our quick ride and drive left us with the impression that VW has managed to suppress the various noises from compressors and cooling pumps better in its Passat prototype than Toyota has in its 2016 Mirai sedan.

Both cars at this stage are still a long way from production vehicles, however, and manufacturers typically refine noise-suppression materials right up until the assembly lines start.

One interesting feature of the hydrogen Passat: When the car is stopped, it uses the output from its fuel cell to recharge the hybrid battery to full capacity.

That's to reduce the number of times the stack shuts down and powers up again, our ride-along engineer explained.

Overall, we found the hydrogen Passat to be an impressive vehicle for a development prototype that'll never be built in its current form.

As to future plans, though, Volkswagen's executives--like those at many companies besides Toyota, Honda, and Hyundai--demurred.

It all depends, they said, on which regions or countries are able to roll out a hydrogen fueling infrastructure.

Which, in the case of zero-emission vehicles powered by hydrogen rather than grid electricity, seemed to be the theme of the week.